Ode to Belgium. Bouillon and the Protector of the Holy Sepulchre

Continuing the story of our journey through eastern Belgium, Wallonia.

The town of Bouillon, Bouillon or Bouillon, arouses curiosity just by its name. And learning that in the city there is not just a fortress, but the ancestral castle of the leader of the First Crusade, the Duke of Bouillon, it was simply impossible to pass by.

Bouillon lies in the south of Wallonia, almost on the border with France, in the picturesque valley of the Semois River, which makes a couple of beautiful turns in this place.

The town is microscopic, with 5,500 inhabitants, and today leads a rather sleepy tourist lifestyle. It’s hard to even imagine that it has seen much in its lifetime. Bouillon has been the apple of contention for big families, emperors, kings and even the church for hundreds of years.

The castle of Bouillon was built between 1050 and 1067 by the Lorraine Duke Gottfried II on the strategic route from Reims through Liège to Aachen, which connected the Upper and Lower Lutharingia.

By the Treaty of Verdun in 843, the entire empire of Charlemagne was divided into three parts by his grandsons, or rather, by the sons of Louis the Pious (Lothair I, Charles II the Bald, and Louis II the German). Louis received the eastern part, the future Germany, Charles the western part, France, and the elder, Lothair, part of northern Italy and the places of today’s border regions of Belgium, France, and Germany. The country was named Lorraine, the country of Lothair, after its owner. Later Lorraine was divided and the owner of the lower Lorraine became our hero. But not immediately.

Gottfried of Bouillon was the eldest son of Eustathius II, Count of Bouillon and Ida of Bouillon, sister of the last Count of Lower Lorraine. Little is known of Gottfried’s early years. His mother’s brother, Duke Gottfried of Lowerlotharing, who had no direct heirs, adopted him, but after his uncle’s death in 1076, Gottfried was not brought into possession of the Duchy of Lowerlotharing. The duchy was given by Emperor Henry IV to his son Conrad. The boy was then 15 years old, only to be reconciled. In 1080 Gottfried serves with distinction in the armies of Emperor Henry IV, and in the battle of Merseburg he stabs to death his adversary, Rudolf of Swabia, with his own hand. In 1089 he took part in the emperor’s campaign against the pope, and for his faithful service he got his title and the castle back. But soon Gottfried falls gravely ill, and probably thinks the illness is God’s punishment for daring to fight against the head of the Church.

READ
Dunnottar Castle in Scotland, the story of the legend

At a church council in Clermont on November 27, 1095, Pope Urban II gave a speech in which he called on Christians to free the Holy Places. Gottfried of Bouillon took this call as an opportunity to atone for sins, mortgaging the castle and arming the 20 thousand crusader detachment. In the spring of 1096 he, among other detachments, set out to the East, accompanied by his brothers, Eustathius and Balduin, and, through Germany and Hungary, reached Constantinople. Here the Emperor Alexei Komnin helps the crusaders to cross the Bosporus, where the Turks were waiting for them. In 1097 the crusaders recaptured Minor Asia Nicaea from the Muslims, and in 1098, after a difficult siege, and Antioch, where they were soon themselves besieged by the Iconic Sultan Kerboga. The Crusader army was in a desperate situation, and the council of war suggested even leaving the city in secret. But then, as the Provençal monk Peter Bartholomew saw, a holy spear was found, which had pierced the side of the crucified Christ. Chronicles assert that this incident so galvanized the courage of the Crusaders that they at once won a complete victory over the Seljuk Turks under the walls of the city. In January 1099 Gottfried marched toward Jerusalem.

On June 7 the crusaders saw for the first time the domes and minarets of the holy city, and greeted it with joyful cheers. Their courage, weakened by the long march, was again inflamed and despite the double walls and the strength of the garrison, which was larger than the crusader army, Godfried took hold of Jerusalem after a five-week siege on July 15, 1099 (other sources say July 19). The crusaders invaded the city from all sides, and all night there was a gruesome massacre that Gottfried could not stop. The next morning he went to the church of the Holy Sepulchre to give thanks to God for the conquest of the Holy City. Gottfried was unanimously proclaimed king of Jerusalem. But the hero did not want to lay a golden crown on his head where “the King of kings was crowned with a crown of thorns” – he contented himself with the title “defender of the Holy Sepulcher” and the Duke of Jerusalem. In 1100, Gottfried in alliance with the Prince of Galilee, defeated the Sultan of Damascus at Jordan, and returning from this expedition, suddenly fell into a fever, either from the poisoned fruits that the Emir of Caesarea had given him, or from cholera. Barely making it to Jerusalem, Gottfried dies. His body was buried on Golgotha, near the Holy Sepulchre. His brother Baudouin of Boulogne immediately took the throne in Jerusalem and was crowned king.

The tiny town of Bouillon is today one of the main tourist centers of Belgium. There are only three streets, which cuts through the river Semois, which makes this area so picturesque. Bouillon is a quiet and relaxed little town, so you will be able to rest there with your family. Those who want to hide from the hustle and bustle of the city and are looking for inspiration go there. Let’s talk more about this wonderful city of Belgium.

The city of Bouillon is located on the Belgian-French border in the province of Luxembourg. Its area is 149 square kilometers, and its population is equal to 5.5 thousand people. You can imagine how small this city is. You can reach it by bus or car (highway N89). Not far from Bouillon is the town of Libramo, where the nearest train station is located. There you can find the bus number 8, which will take you to the right place.

The city has little developed transport infrastructure. Tourists come to it by car, while locals are used to get around by bicycle or motorcycle. In spite of this there are two companies where you can rent a car. 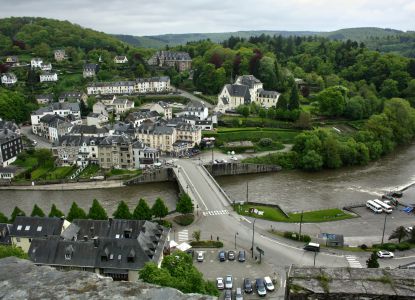 The great fame of the city of Bouillon in Belgium was brought by its main and only attraction – the medieval castle of Bouillon. It is thanks to it the city is sometimes called Bouillon. This structure does not look romantic, but travelers from all over the world come to the city just for the sake of it.

A favorite attraction for tourists in the city of Bouillon are considered strolls through its quiet streets and promenade. The medieval architecture of the houses, beautiful panoramas and tranquility make this city attractive to tourists. In the evening you can visit local establishments and taste the most delicious home-brewed beer, and in the daytime you can go fishing in the vicinity of the city.

There aren’t many options for accommodation in the town of Bouillon. Naturally, as in any tourist center, there are hotels of different classes, and hospitable residents are willing to give you a room or even an apartment for a small fee. There are only three hotels in Bouillon: Hotel de la Poste 4*, Panorama Hotel 4* and Hotel Cosy 3*. All of them are close to the fortress of Bouillon. The main disadvantage is that they are very crowded and everyone who wants to stay there should book a room in advance.

Almost all guests of the city prefer to eat in the hotels where they live. But if you want to take a break and eat somewhere outside of the hotel, you can easily find decent establishments. There are no fancy restaurants in Buillon, but there are cozy eateries and pubs. You’ll enjoy delicious Belgian cuisine, fine wine, and excellent beer. Prices in local establishments are a little bit overpriced; a dinner for one person costs $300-500. It is worth noting that the chefs in them work excellent and will be able to cook you a very tasty and high-quality dishes, and the staff will help to spend time comfortably and cozily. Most of the good reviews from tourists receive such institutions: