Chateau of Vincennes has an amazing history, which is reflected in its appearance and decoration, coming to France, you must visit the castle.

Located in the suburbs of Paris, the castle of Vincennes. It is quite different from other castles in France and Europe. First of all Vincennes Castle has a large size and is considered the largest building in France. The area of the whole structure is 5.5 thousand square meters. The main tower of the castle is recognized as the largest in Europe. The chateau has an atypical location for such constructions. In ancient times fortresses were set close to the least protected areas of the country. As a rule these were the places with hills, mountains and ravines. The Vensen castle, contrary to all rules, was built in an open space. The moat surrounding it was filled with water from a shallow stream. Now there is a small plot of forest around the castle, but previously it surrounded it on all sides. It was famous for a variety of game and gathered statesmen during the hunt.

The Castle of Vincennes was not built immediately, like any other castles of those times. The whole history began with the desire of Louis VII to build a hunting lodge. But after it was built, it was used for times of revelry. The royal families with their elite spent their free days here, held weddings. It is known that Philip III and Philip IV celebrated their marriages in the castle.

The Vensennes Castle was popular with the population. Many French monarchs chose it as a residence. From here crusades began. After some time it became necessary to strengthen the castle because of the unstable military situation. In 1337, the central tower was erected. Charles V, who was born in this castle, chose it as his residence. It was he who carried out a series of reorganizations that contributed to the strengthening of the castle. The construction lasted a long 10 years, as it turned out to be very costly. As time went on. The castle grew and developed. In the 16th century, the chapel built near the castle was sacred. In the main tower for a long time were private chambers of monarchs, until they were moved to the new premises near the fortress wall. And all because there was not enough space in the tower for the luxurious life of the monarchs.

READ
Matsumoto Castle Japan, How to get there and description

Vincennes Castle was one of the three official residences of the kings of France. In the 17th century, the Sun King ordered the erection of two wings, named the King’s wing and the Queen’s wing.

Time passed and the residence was moved to the Palace of Versailles. Vincennes Castle noticeably lost its position, becoming simply a military fortress. In the central tower was even organized prison for important persons of state. Voltaire, Denis Diderot and the Marquis de Sade visited it.

With the change of rulers the purpose of the castle changed. It began to serve as an arsenal of weapons. That hunting lodge was destroyed, and in its place were built strategic buildings, which have survived to this day.

The castle went through many tragic historical periods, but has remained virtually intact. In 1964, the French president planned to move his residence to the palace, but the idea was never implemented. Today the palace is recognized as a national museum. But access is open only to the Chapel and the main tower. All other rooms are closed for renovation.

The main tower or donjon has rather impressive size and stands out from the others by its architecture. It consists of six levels, each of which had a specific function. Surrounding the tower is a wall. It doesn’t have as thick walls, but in spite of that it looks pretty powerful.

Tourists should visit the Holy Chapel, made in the Gothic style. It is special because it has two rooms for prayers – one for the king and the other for the queen. It is worth paying attention to the stained-glass windows. They were created by the master craftsman Nicola Borin. During the war with the Germans, they were destroyed and replaced with identical stained glass windows. But even these analogues did not last long and were lost in 1999.

You can get to the palace by public transport. Take Metro Line 1 to the station Chateau de Vincennes. There you are. The entrance you will find in the “City Tower. A visit to the castle is free. You only have to pay for guided tours or to visit the closed rooms. Once inside, you get to the alley, from which you will already travel by ordering a tour or on your own. Then you get to the main square, which offers a magnificent view of the Main Tower. You can get there by crossing the bridge. It is also recommended to visit the chambers of the royal couple. It is a room divided by a partition. Louis XIV rested here rarely, but his mother Anne of Austria loved Vincennes and often visited it.

Vincennes Castle – the royal residence of the Valois dynasty

In the middle of XII century, a royal hunting lodge was built on the outskirts of Paris in the Forest of Vincennes. Its first owner was Louis VII. During the next century the house was used for royal hunting, it was enlarged several times and by the end of XIII century it turned into the elegant Château de Vincennes, which became the residence of the Valois dynasty. 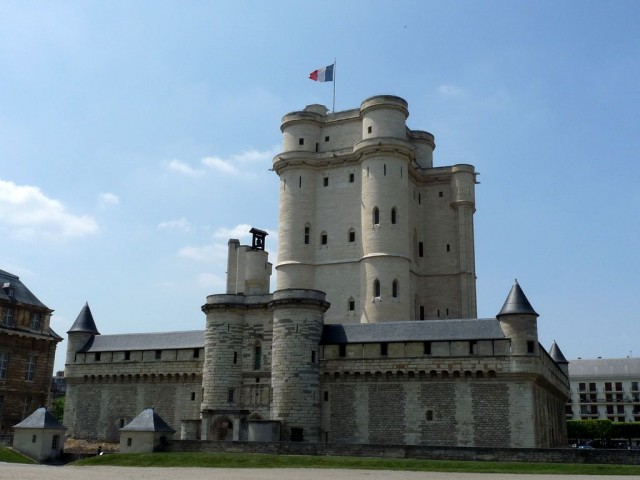 In the middle of the XII century, a royal hunting lodge was built on the outskirts of Paris in the Forest of Vincennes. The first owner was Louis VII. During the next century the house was used for royal hunting and was enlarged several times. By the end of the 13th century, the hunting lodge had become the elegant Château de Vincennes, the residence of the Valois dynasty. Over several centuries, the Château de Vincennes witnessed the most important life events and destinies of the French monarchs.

Since the XIV century it was decided to strengthen the defense of the castle. Under the order of Philip IV they erected a fortress wall and built a 52-meter donjon tower. The tower became the highest in Europe, and remained unsurpassed to this day. During the reign of Charles V, the donjon was his personal residence. In the tower were the apartments of the monarch, there was also placed the entire royal administration.

READ
What is Pernstein Castle in Bohemia 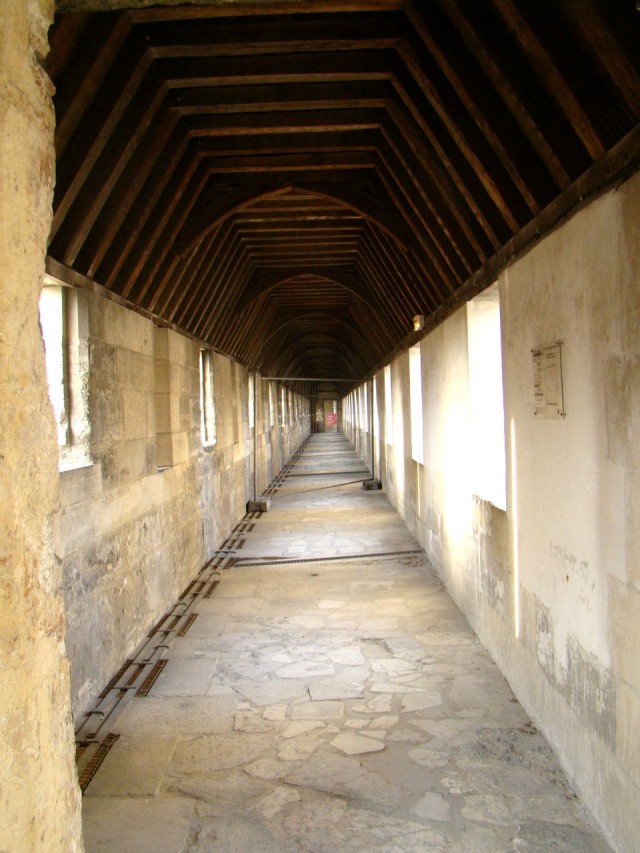 Construction of the fortifications continued under Charles V. A strong rampart with a 12-meter high wall encircled the buildings in a circle of one kilometer; six high towers and three gates were built. Covered passages were built along the fortress wall. These galleries were called the “King’s Walk” – the king’s sentries were sent there on sentry duty. 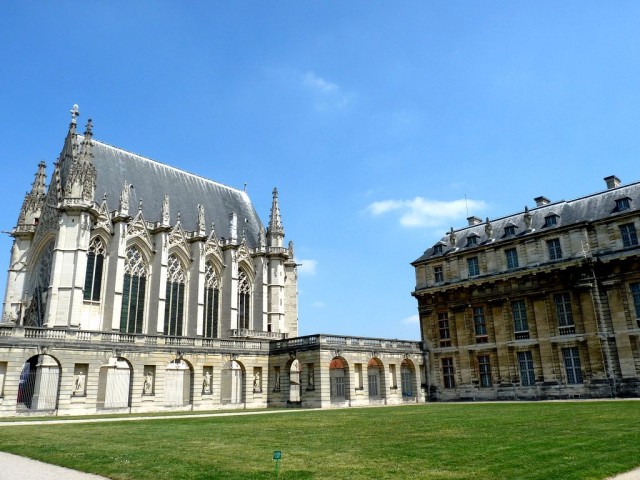 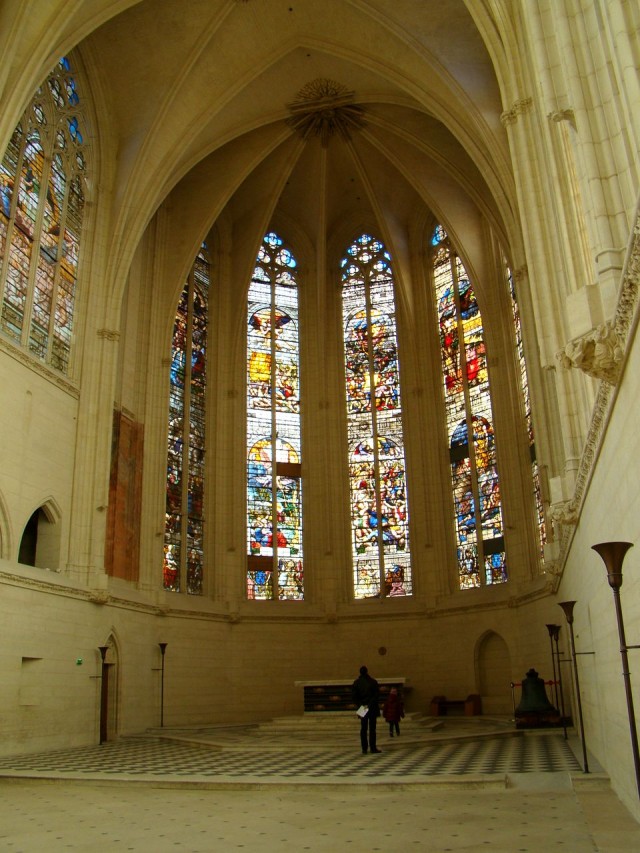 The work lasted for about two centuries. In 1380, construction began on the Chapel of Saint-Chapelle, modeled on the Sainte-Chapelle on the island of Cité. The Sainte-Chapelle was consecrated in 1552. It was a single-nave temple of unusual proportions in the French flamboyant Gothic style. The tall, narrow building was decorated with slender turrets, pinnacles, and sculptures. Above the entrance lancet arch was a large rose window. 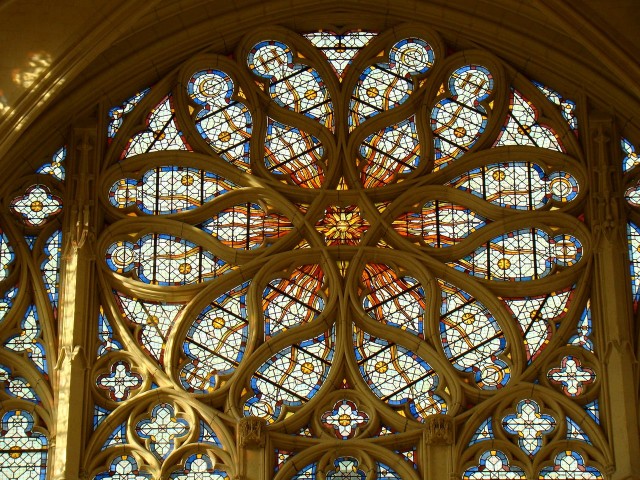 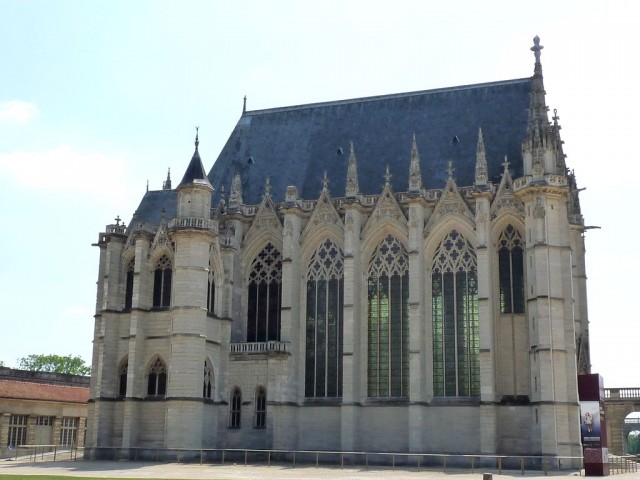 On either side of the apse were two chapels: one for the king and one for the queen. A sacristy was added on the northern side. The stained glass windows of the temple were made in the 16th century by master painter Nicolas Borin; in the 20th century, they were added with new stained glass in a colored frame. 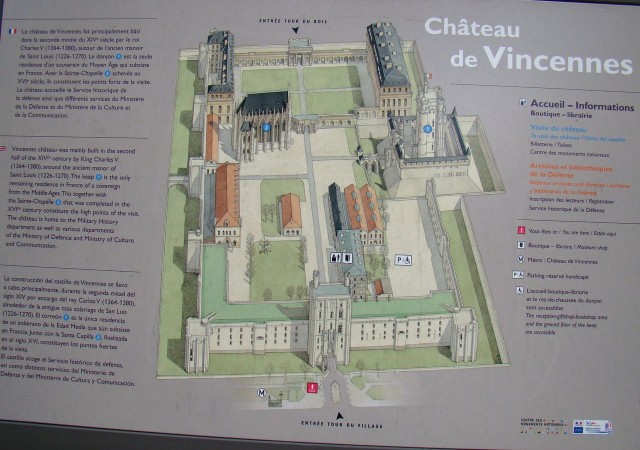 The main building of the castle had a rectangular shape and was surrounded by a moat (the moat survives, although it no longer holds water). Under Louis XI the royal apartments were moved into the building; for some years the young Louis XIII lived there with his mother – Maria de Medici. At the time of Louis XIV, two symmetrical classical pavilions were built, with a common courtyard for the king and queen, and openings in the southern part of the rampart. This stage of the reconstruction was carried out by the architect Louis Leveau . In 1639 in the bell tower tower clock and bell were installed, which called to prayer the inhabitants of the castle. 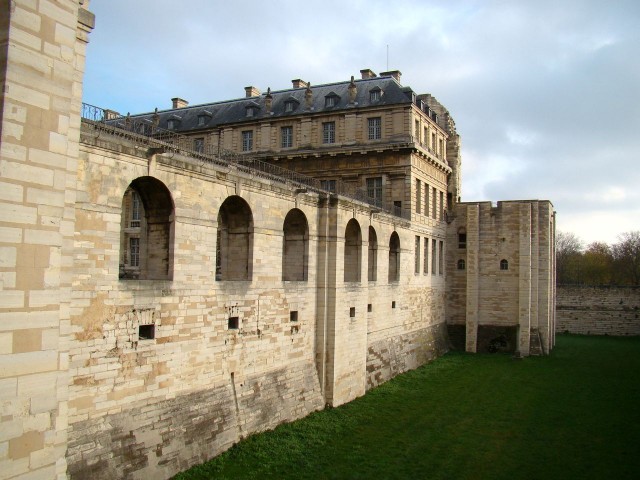 For a long time Château de Vincennes was the most important residence of the French monarchs, but by the late 1660s Versailles had been built. Louis XIV and his entourage moved to the new castle, and a porcelain factory (the future Sevres manufactory) was opened in Vincennes. Since 1796 on the territory of the castle were built military barracks and arsenal.

The donjon of Vincennes became a state prison, where nobles served their sentences. The future French king Henri IV was in this prison for 15 years before his accession to the throne. Among the inmates of Vincennes was the great figure of the Fronde, Cardinal Retz; at different periods of time, the Marquis de Sade, Nicolas Fouquet, Mirabeau and Diderot were imprisoned there. Prisoners in the prison of Vincennes enjoyed relative freedom: many of them were allowed to read and write letters, take walks, and hunt; some were accompanied in detention by family members and servants. Many prisoners left their autographs, writings and drawings on the walls. 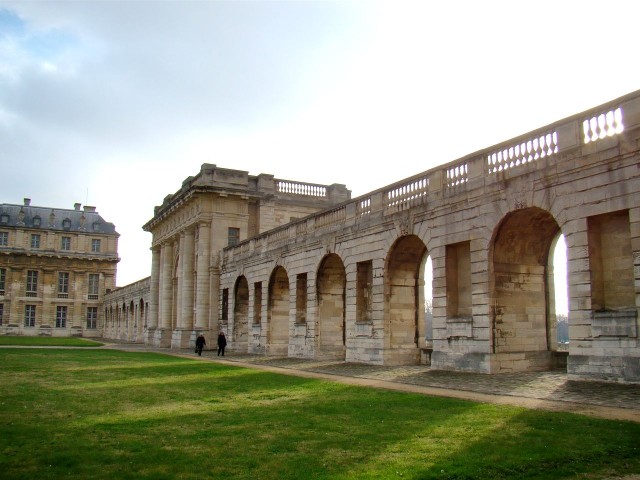 In the castle courtyard the Duke of Enghien was executed on the orders of Bonaparte, and in 1917 the famous spy Mata Hari was shot. During World War II, the Nazis slaughtered French civilians in Vincennes (the castle was severely damaged by the retreating Nazi troops).

Under Napoleon III, the fate of the Château de Vincennes changed. In 1855 the emperor ordered to create on its territory an English garden with four artificial ponds. The forest of Vincennes was united with neighboring parks, and paths were laid through the whole massif. The park became accessible to all Parisians. In 1863, on the southern side of the Vincennes Forest was built hippodrome, and in 1894 – the velodrome. A botanical garden of flowers in the Japanese style was created in 1907. Since 1932, a zoo was opened in the Vincennes forest.

Charles de Gaulle wanted to move the presidential residence to Vincennes, but this project was not realized. Now the Château de Vincennes is under restoration, and visitors are only allowed in the dungeon and Holy Chapel. 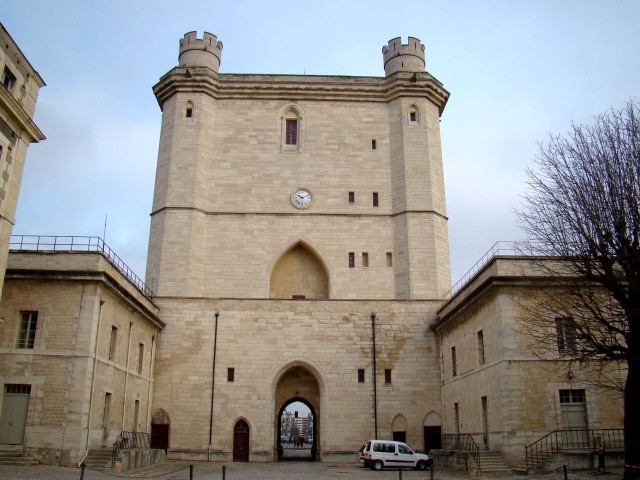 The high donjon had a monumental column as its supporting pillar, on which all the vaults in the ceiling were supported. By the end of the twentieth century, the column’s defect became apparent – many of the stones had crumbled over time. During the reconstruction of the tower, temporary supports were installed, and the damaged stones were replaced by new elements. At the time of Charles V, the inner walls of the prison were covered with paintings. During the restoration of the prison, they did not restore these paintings – today they are projected on the walls with the help of spotlights. Of all the towers and gates of the fortress wall, only the dwelling Tower of the Village has survived. 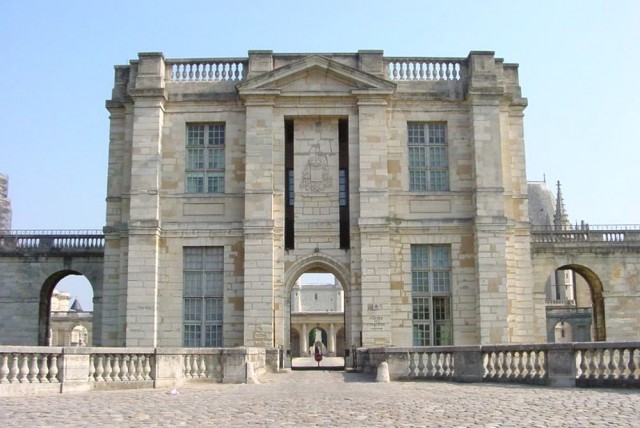 The castle grounds are home to several government institutions: the archives of the Ministry of Defense, the Research Center of the History of National Defense and the Commission on the Restoration of the Castle .