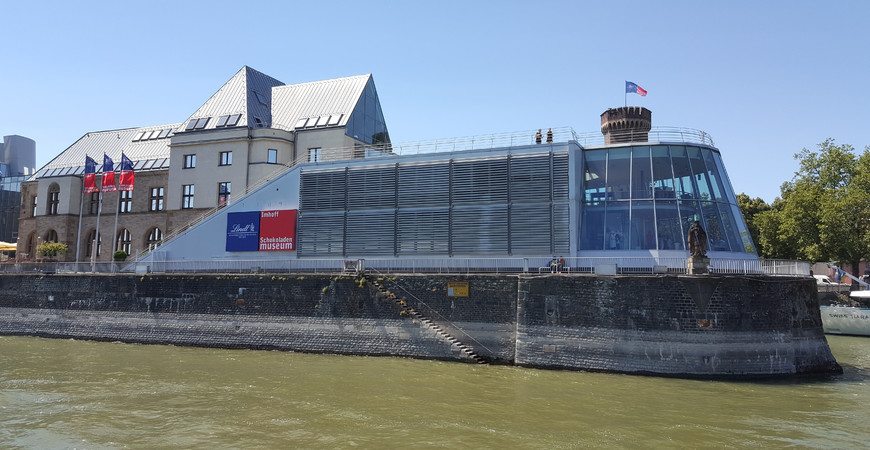 Cologne Chocolate Museum is the most visited museum in the city. In addition, it is one of the ten most popular museums in Germany. Which, in fact, is not surprising. Never before has a visit to a museum been so sweet. Here, they say, you can combine business with pleasure. You can even try the huge chocolate fountain, the main exhibit of the museum. And at the same time you can learn a lot of interesting things about the history of chocolate and cocoa and the secrets of producing the most beloved delicacy of the whole mankind.

The founder of the museum is the Cologne chocolate manufacturer Hans Imhoff. His Stollwerck chocolate factory, which he owned in 1972, was one of the largest in the world. It was founded by Franz Stollwerck in the middle of the 19th century as a small caramel workshop in Cologne, which then became one of Europe’s and America’s largest chocolate-making concerns.

Then, after the First World War and only after recovering from the Second World War, the firm, already run by Franz Stolverk’s five sons, fell into serious financial difficulties and was sold under the hammer for a nominal sum. Imhoff, the new owner of the factory, as a child, adored Stolverk chocolate and admired the machines that produced the magic chocolate.

When the company moved to a new location, they found rare materials related to the history of both the Stolverk chocolate factory and chocolate production in general. A celebration of the 150th anniversary of the factory was soon planned, and Imhoff ordered an exhibition on the history of the company to coincide with this event.

Five times as many visitors as expected came to the anniversary exhibition. The historic chocolate fountain on display was of particular interest to the public. So Hans Imhoff had the idea of creating a chocolate museum, where all the valuable finds would find their rightful place.

To this end, he bought the old customs house and a plot of land on the banks of the Rhine, and construction of the museum began. The cost of setting up the museum was 53 million DM. And after 13 months, in November 1993, the Chocolate Museum was inaugurated.

READ
House of Butterflies at VDNKh in Moscow, photo and description

The museum exposition spread over three floors, occupies a total of 4,000 square meters.

After Hans Imhoff sold the company to Stolberk, the new owners did not want to take over the museum, and it was sold to the Austrian chocolate concern Lindt. The managers of Lindt were unwilling to tell the story of the rival confectionery, and all materials and machinery associated with the Stolverk company were removed from the museum. The Imhoff-Stollwerck-Schokoladenmuseum was renamed and is now known simply as the Schokoladenmuseum. However, the historical chocolate fountain of Stollwerk was kept in the museum.

The Chocolate Museum begins with a 5,000-year history of chocolate, beginning with the Olmec, Maya, and Aztec peoples of Latin America, for whom chocolate was the food of the Gods.

You’ll learn what types of cocoa beans are considered the best for making high-quality chocolate, where they grow, the importance of roasting the beans, why lumping improves the taste of the final product, and which types of chocolate are officially recognized by the International Chocolate Association, what they are made of, and much more.

There are also photographs of historic chocolate-making machines, labels of famous brands, tools for handmade chocolates, vending machines for selling chocolate, and porcelain and silver bowls from the 18th and 19th centuries for drinking liquid chocolate.

The 3-meter-high chocolate fountain with a 200-liter vat of liquid chocolate is the favorite exhibit of all visitors. After all, you can taste it as much as you want.

Cocoa trees of Theobroma cacao and Theobroma grandiflorum varieties grow in the museum’s greenhouse 10 meters high and 100 square meters in volume. The greenhouse maintains the climatic regime of their growth, the temperature plus 30 degrees and 100% humidity.

There is a fully automated chocolate production line in the museum – from making the liquid mixture to packaging the finished product, every step of which you can see with your own eyes.

In the confectionery shop you can watch the process of handmade candies, truffles and chocolate figures. Every day the museum makes up to 400 kilograms of chocolate products, most of which can be purchased in the museum store. All visitors at the entrance and when leaving the museum get a small souvenir in the form of a small bar of chocolate.

Besides looking at the museum exhibits yourself you can take a tour around the museum, take part in different tastings or take a course on how to make sweets.

In spring and summer, the chocolate museum is open every day.

The last admission for visitors – 1 hour before closing.

There are several ways to visit the Chocolate Museum – individual viewing, guided tours, tastings and courses.

Guided tour of the museum with a chocolate bar – 3,50 euros + admission ticket.

Includes a short guided tour of the museum plus unlimited tasting of the best chocolates. The tour and tasting lasts for 1,5 hours and costs 90 euros per person. Without tasting – 65 euros.

At the museum you can attend small courses – workshops on the production of chocolate and candy.

Under the guidance of a master confectioner you can design and make your own variety of chocolate. The course duration is 2 hours, the cost is 45 euros per person.

Course participants will learn how to make couverture properly, learn the methods of making candy fillings, and make their own candies. Recipes change regularly according to the season. Duration of the course is 3 hours, cost 60 euros per person.

Besides the basics of chocolate candy making – introduction to the experimental components and creation of your own type of candy. The course is 4 hours long and costs 75 euros per person.

For children and family offers:

Children’s courses are provided for children from 8 years old. All produced chocolates can be taken away.

The museum is conveniently located in the city center, between the historic center and the Rhine harbor promenade.

The Chocolate Museum is conveniently accessible by train, city train, or bus.

There are several parking lots near the Schokoladen Museum.

The Chocolate Museum is conveniently reached by Uber cab.

The Chocolate Museum is incredibly popular with tourists visiting Germany. Many of them, having a limited amount of time, visit the museum as part of a tour from Dusseldorf in Russian, combining the most important sights, such as Cologne Cathedral, with less popular ones.

The word “museum” evokes a sense of boredom in many people and associates it with exhibits, near which there are signs saying “Do not touch with hands”. The information that guides provide is only understandable to specialists, and the average person sometimes simply isn’t interesting. Today there are museums that do not fit into the standard framework. Visiting them brings a lot of positive emotions and unpredictable surprises.

Such is the “sweet” collection of exhibits – Chocolate Museum in Cologne, which opened on October 31, 1993. It was initiated by the head of a local confectionery company, which has been making this delicacy since 1839. His name is Hans Imhoff. Since spring 2006, a cooperation with the confectionery company Lindt & Sprungli from Switzerland has been established.

Where is the chocolate museum?

The Cologne Chocolate Museum is an unusual building and impossible to miss. It is located in the northern part of the Rheinauhafen peninsula, built in the form of a ship, heading into the waters of the Rhine. The total area of the four-story building made of glass and brick is 2,000 m2 . The museum is characterized by the fact that it is not located on the premises of a chocolate factory.

Numerous exhibits about the history of appearance of chocolate, methods of its production, from ancient Maya to modern technologies are collected and kept in the museum. Every year at least 5,000 tours are held in the museum, and over the years it has been visited by more than 8.5 million tourists. It exists thanks to its own revenues, requires no government investment, and rightfully takes a place in the top ten most visited famous places in Germany.

Museum of chocolate in Cologne – description.

The museum consists of the following departments:

A pleasant surprise for visitors is the opportunity to treat themselves to small bars of chocolate lying in a special box at the entrance.

The first floor of the chocolate museum is devoted to greenhouses where cacao trees grow. Their fruits are the raw material for the production of favorite delicacies. You can get there through a special gateway. Glass cubes in the greenhouses maintain the climatic conditions of the tropics. Daytime and nighttime temperatures are maintained, and with the help of electronics every hour artificial irrigation is switched on, simulating rain.

The miniature confectionery of the Museum of Chocolate in Germany produces about 400 kilograms of chocolate products per day. Tourists can watch the production process through large windows. The entire production process is overseen by a computer system that mixes, cooks and fills hot chocolate into molds. After it cools, the finished products are put into boxes and packed by two employees. In the pastry shop, you can admire how chocolate Christmas bunnies and Santa Clauses are made.

READ
Museum of Bread in St. Petersburg, description and how to get there

The collection of exhibits reflects the entire history of chocolate production. It counts three thousand years and begins with the Mayan civilization, who considered cacao fruits the food of the gods. At that time no one knew chocolate existed. Cocoa was used as an energy drink that included pepper and cornmeal.

The collection includes equipment for removing fruits from the tree and carrying them (knives, baskets) and devices for processing them. The photographic material presented on the stands is truly unique. For example, the photo that shows the first quality control lab dates back to 1869. Few people know about the existence of the German Association of Chocolate Producers, which emerged in the 18th century.

But the main subject of the exhibition of the Cologne Museum is chocolate. Next to each variety, of which there are more than a hundred, there is a saucer with its ingredients. Separately, you can learn about the development of the packaging process of sweets (old boxes of various materials, machines for the automatic sale of treats, etc.).

The main highlight of the chocolate museum in Cologne is a unique chocolate fountain three meters high. Its continuous operation requires more than 200 kilograms of hot liquid chocolate. In the center of the bowl of the fountain “grows” a tree with golden cacao fruits, and four miniature fountains spew jets of chocolate heated to 60 degrees. Employees dressed in white costumes hand out small wafers to visitors, which have previously been dipped into the fountain.

After the tour through the chocolate museum in Cologne, tourists are presented with small gifts. If you have a desire, you can buy any product produced by both the museum and the chocolate factory, in the store located at the exit of the building.