Christmas Island is a small island in the Indian Ocean, an outlying territory of Australia.

The island is located 2,360 kilometers northwest of Perth and about 500 kilometers south of Jakarta.

The island is of volcanic origin. Its highest point is 361 m above sea level. The island has a tropical climate. The average annual temperature is about 27 ° C. Rainfall is quite high – about 2000 mm per year. There are several small rivers on the island, so the population is provided with drinking water. The area of the island is 135 km² [1].

The island owes its name to its discovery on Christmas Day in 1643. The British navigator William Dampier was the first European to land on the island in 1688 and describe it. British colonization of the island began in 1888. In 1900, the island became part of the British colony of Singapore, and in 1958, the island was transferred to Australia. The island is governed by an official representative of the Australian government.

The population is 1400, but only 396 Australian citizens (2004). 70% of the residents are Chinese, 20% are white, and about 10% are Malay. Religiously, most of them are Buddhists (about 35% – mostly Chinese), about 25% are Muslims (Malays and some Chinese), about 20% are Christians (almost all Europeans and some Chinese). Taoism is also widespread among the Chinese (about 15%).

The problem of illegal immigrants

Because of the proximity to Indonesia, the island has for a long time been a target for illegal immigrants from Southeast Asia, the so-called “boat people”. After the Pacific Solution doctrine by the Australian Prime Minister John Howard, the flow of boat people has been greatly reduced.

From 1895 the development and export of phosphate began and the industry was linked to the emergence of a permanent population. After the depletion of the deposit mining of phosphate ceased in 1987, and the island became a center of ecological tourism. 63% of the territory is a national park. In 2001, Australia and Russia signed an agreement to build a spaceport on Christmas Island, but in 2003 work on its construction was discontinued.

Since 1993 the Australian Post is the postal operator on the island. The postage stamps they produce for the island can also be used within Australia, just as Australian stamps can be used on Christmas Island.

The 18-kilometre-long railroad connects Flyin’ Fish Cove North with South Point on the south end of the island. The road has a track of 1435 mm and was built in 1914.

Southeast of Flaming Fish Cove is the island’s only airfield.

Information must be verified or it may be questioned and deleted. You can edit this article by adding citations to authoritative sources. This mark was set on May 14, 2011 .

See what “Christmas Island (Australia)” is in other dictionaries:

AUSTRALIA – 1) The Commonwealth of Australia, a state. The name Australia is derived from its location on the mainland of Australia, where over 99% of the state’s territory is located. Since XVIII century. Nowadays it is a federation of Australian Union….

Australia (continent) – There are other meanings to this term, see Australia (meaning). Australia from space Australia (from … Wikipedia 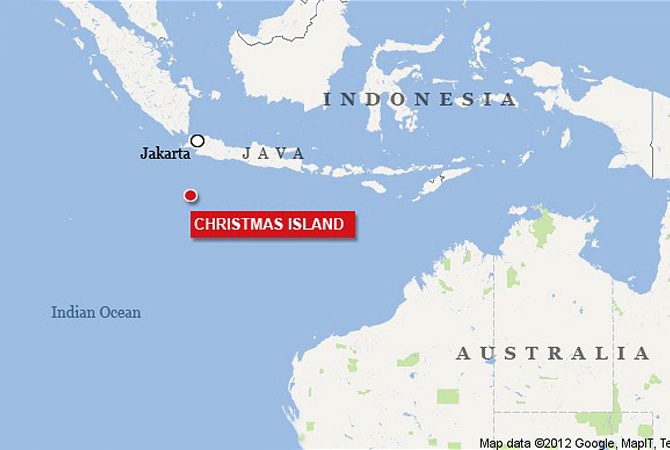 Christmas Island is a small island in the Indian Ocean, an outer territory of Australia. The capital is Settlement (Flyin’ Fish Cove). Population – 2072 people (2011).

The island is of volcanic origin. The highest point – 361 m above sea level. The climate of the island is tropical. The average annual temperature is about 27 °C. The amount of precipitation is quite high – about 2000 mm per year. There are several small rivers on the island, so the population is provided with drinking water.

For visitors and tourists it is relatively easy to get to Christmas Island.

There is a small airfield on the island, which has the status of an international airport, because in addition to Australia, it also receives aircraft from Malaysia and Indonesia.

You can also get to Christmas Island by sea. Though the island has no convenient deep-water bays, small boats and yachts can still sail in. North bay, on the shore of which the administrative center is located is quite suitable for receiving private yachts and small passenger ships.

To obtain a transit visa, you must provide: 1. Application form 876, fully completed and personally signed by the applicant; 2. Valid passport with at least one blank page for visa. Valid passport – at least 6 months after end of trip; 3. 1 color photo 3,5×4,5 cm; 4. Copy of domestic passport. 5. Documents confirming that the period of stay in Australia is not more than 72 hours (air tickets, expected route, tickets for the whole route or their reservation, as well as the visa to the country of destination).

The climate on Christmas Island is tropical, hot and humid. Rainy season: December to April. The average annual rainfall is 2,000 mm. The average monthly temperature is +22-28 ° C.

The natural isolation of the island from the continental world and the limited human impact on its ecosystem leads to the fact that the island’s flora and fauna are preserved in their natural, pristine state. At the moment, about 60% of the total area of the island is the territory of the Australian National Park. This area has preserved quite significant areas of the unique monsoon forest.

It is no exaggeration to say that the annual migration of red crabs is one of the wonders of the world. The migration from the monsoon forest to the coast involves a huge number of crabs (according to some estimates, their number exceeds 100 million specimens). During this time, crabs are everywhere on the island, they fill the roads, streets, and homes, and after a while their offspring migrate in the opposite direction. More than 25 species of land and sea birds nest on the island, some of them are rare and are under the protection of the state.

READ
Collection of castles, palaces, forts and fortresses of the world

Coastal waters are inhabited by huge number of fish, most of which is commercial. There are also some big animals such as whales and sharks.

Tourists and visitors of the island can stay in one of four hotels in Settlement. These hotels are The Sunset Hotel, VQ3 Lodge, Mango Tree Lodge and Captain’s Last Resort. Service in hotels on Christmas Island is at the highest level, as evidenced by the numerous reviews of tourists from different countries. You can also stay at a small mini-hotel in the form of a road motel in the town of South Point. Service here is a bit lower than in the hotels of Settlement, but is quite satisfactory for unpretentious tourists.