The endless snow-white deserts and underwater waterfalls of the Arctic beckon travelers who dream of visiting uncharted lands. Discover the pristine beauty of the area adjacent to the North Pole, see stone spheres of unknown origin – you can do it all by going on an Arctic cruise that takes place every year in late June.

Where is Chump Island

The most mysterious place in the Arctic Ocean is called the archipelago, included in the Arkhangelsk region of Russia. In the center of Franz Josef Land there is an island with steep slopes and cliffs, named after the leader of the expedition, who landed in 1904.

The climatic conditions of Champa Island are the same as in the entire harsh region – the desert landscapes are blown by hurricane winds that bring terrible frosts. The map shows that the island is washed by a narrow strait to the north and a wide channel to the west.

No people live or build houses on the 375 square meter rocky piece of land, but fishermen come ashore and icebreakers and cruise ships have stopped by since 2001.

The Rock Balls of Champ Island

From the rocky peaks that rise over the lifeless stretch of land, glaciers run to the coast, exposing a surface dotted with round stones. Some boulders reach 3 m in diameter, the size of tiny balls 1-2 cm. 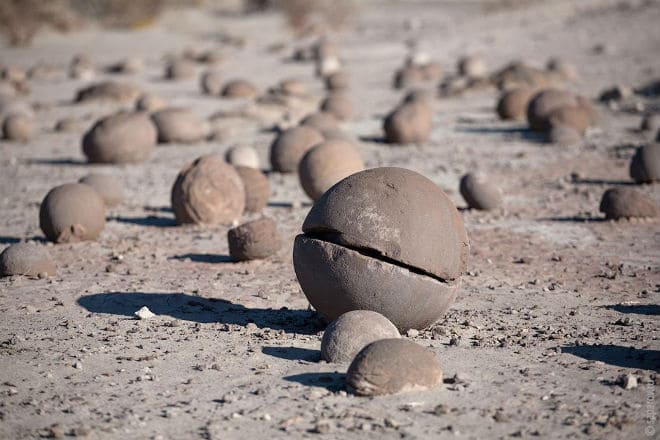 Under the influence of low temperatures, storm winds blowing around the island from all sides, many stones turned into cobblestones, lost their round shape. How the orbs appeared on the Arctic island is unknown. The concretions are not the remains of frozen lava ejected from volcanic craters during eruptions, the balls have a different origin, composed of sand, clams, shells, shark teeth.

Legends of the origin of round stones

Seamless boulders are also found on other islands in the polar archipelago, in New Zealand, in the jungles of Costa Rica, on the plateau near Mangyshlak. There are many theories of the appearance of round stones, but the versions do not give an answer to the main question.

Geologist from Austria, Friedhuber believes that the spheres were formed by the accumulation of sediment in the water, which was carried by the wind to the ocean from the land surface, and the core was formed from cemented sand. 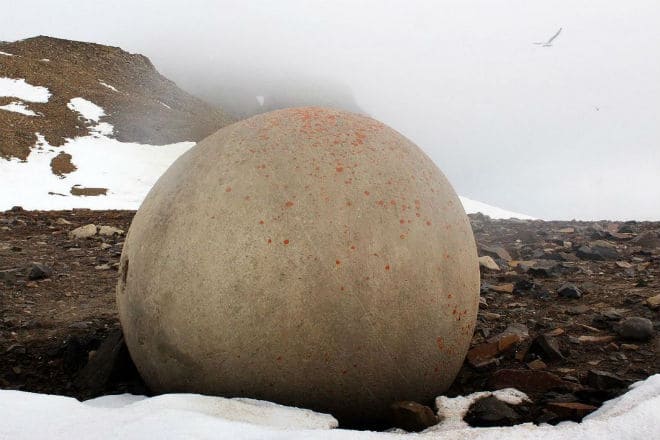 It is difficult to believe the hypothesis of an ancient civilization with a high level of development. Those who put forward such a theory argue that the round balls were left behind after the destruction of the architectural structures in the construction of which they were used.

Scientists believe that the climate in the northern part of the Earth many years ago was warmer, and people lived on the island of Champ. According to one version, ancient architects who knew the laws of antigravity turned solid rocks into liquid spheres and used them as building material.

It is theorized that the rocks originated from shell debris, sea water containing minerals filled the space between the sandstone pores, which led to the deposition of carbonates and the formation of spheres.

The hypothesis that the spheres appeared on the surface after the eruption of lava from volcanic craters is not confirmed; the nodules consist not of solidified magma, but of sandstone. Geologists suggest that the boulders acquired their spherical shape by the action of water, but even if the count goes back millions of years, it is hard to believe that the boulders became round by being shaped by streams flowing down from glaciers.

There is a fantastic theory of the origin of the round rocks on Champa, claiming that they were scattered on the surface of the island by aliens from another planet. Spherolites store information that the inhabitants of Earth have to decipher. 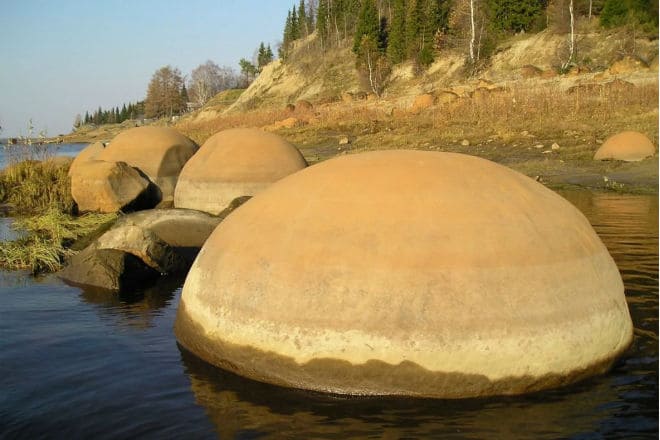 One can get to the polar island to see the mysterious stones during the summer during the cruise, to which foreign and Russian tour operators invite.

The year 2001 was significant for the island of Champ – it was at this time the world was riveted by all its attention to this place, recognizing the presence here of perfectly regular spheres of inexplicable origin.

No scientist in the world has yet been able to give a coherent, scientifically sound answer regarding the appearance of a huge number of “balls” on the island.

The Arctic remains one of the least studied areas of the entire globe. It is hard to believe, but in the midst of the 21st century this place has not been studied even by half: trivial geographical maps, dryly described Arctic travels and polar expeditions, little climatic and biological data – and that’s all!

From the outside, the Champ Island does not differ from any other piece of land within the Arctic Ocean. Ordinary Arctic landscapes, miserable flora and fauna, rocky cliffs, powerful winds and impossible frosts. There are no people or any significant buildings here, no one lives here, so the island is justifiably called uninhabited. From time to time the island is visited by fishermen, forecasters or explorers thanks to the direction of the Northern Sea Route. After 2001, tourist trips began to be practiced here.

The island was named after the leader of one of the Arctic expeditions, William Champa. It was he who organized the search for the American businessman Ziegler, who disappeared in the polar waters. In 1904, the expedition landed on this island.

The island is rocky with very steep slopes. There are several rocky peaks on Champa, from which glaciers converge to the coast. But there are glaciers not all over the island – there are none in the southwestern part. According to the records of various expeditions, the spring water on the island is very tasty. Almost in the middle of the island there is a flat plateau, from which you can see the most beautiful horizons and landscapes.

There are two ways to get to Champa Island: either as part of scientific expeditions, which still continue to this day, or as part of tourist trips on real icebreakers, which are organized annually and fall in late June and early August.

“Balls for the Entertainment of the Gods”.

Any expedition to Champ Island is carried out because of the presence on its territory of huge balls (spheres) of inexplicable origin, turning into a fascinating journey. These stone “inhabitants” have become a kind of calling card of the island. It is because of these spherolites (as these stone spheres are scientifically designated) many tourists head here. The origin of these objects is still not clear.

So, the island of Champ is strewn with many strange round stones of varying diameters – from the size not exceeding ping-pong balls to giant diameters (more than three meters). The greatest number of stones is found along the coast, and is almost undetectable toward the center of the island.

What is surprising is that the stones are absolutely perfect spherical shape and are clearly not of volcanic origin (densely compacted sand is in the composition). The spheres are either just lying on the surface of the ground, or are slightly dug into it. Spherulites, as these stones are called, have a core of organic origin (such as clam remains or shark’s teeth) around which the spherical layering of sandstone occurred.

The question “where did the spherulites come from?” is still open to the world community. The theories of origin of these round stones very much – from washing of stones by waves and finishing activity of extraterrestrial civilizations.

Every geologist who visits the island comes up with his own theory about the origin of the spheres, but none of them has ever been scientifically proven or substantiated, although individually they provide answers to many questions. All the theories have only one thing in common: humans have nothing to do with them. And one writer from Switzerland, Erich F. Deniken in general stated that these were balls played by the gods themselves.

However, with the help of one Arctic theory you can get the most answers. According to it, several thousand years ago, the current Arctic had a completely different climate, and on its territory there was a special civilization with a particularly high level of development. The remains of this civilization supposedly rest at the bottom of the “icy” ocean, and the spheres are the remains of their engineering structures or their consumables. The purpose of these hypothetical structures has never been clarified.

No matter how perfect human science is, it has never been possible to find out unequivocally who “scattered” the stone globules over the island of Champ. There is a lot of information about spherulites, but it is not enough to give a unambiguous answer to the only question. Champ Island may forever remain a mystery not only for the ordinary people of the planet, but also for the scientific community.