Cluny Museum (Musée de Cluny) is a collection of articles of everyday life and art of the Middle Ages. The official name of the site is the Musée national du Moyen Âge.

The site where the Cluny Museum is located has, without exaggeration, a history of two thousand years. There were originally rich Roman thermae (baths) in the 2nd-3rd centuries, but even before that, according to some scholars, there was a temple of the goddess Isis. After the barbarians burned the baths the ruins were uninhabited for a long time but their solidity was such that in the mid 14th century (over a thousand years later) they served as the foundation for the residence of the abbot of the richest monastery in France, Cluny (the abbey was located 400 km from Paris). At the end of the XV century, the residence, which acquired the name of mansion of Cluny, was expanded and rebuilt in the spirit of late, “flaming” Gothic.

After the death of Louis XII, it was briefly occupied by his widow, Marie Tudor, and later by the future Cardinal Mazarini. In 1833, collector Alexandre du Sommera housed his personal collection of medieval and Renaissance rarities. After his death in 1843, the state bought the building along with the entire exposition to create the Cluny Museum.

The uniqueness of today’s museum lies in the fact that its exposition was created at a time when the traditional educational approach to museum work had not yet taken shape. Accordingly, visitors get the impression that they are not in an ordinary museum with thematic halls, information boards and interactive stands, but in a medieval treasure house. The museum may seem chaotic and incomprehensible because of the minimal structuring of the exhibits and the inexplicable logic of their placement, but there is a special beauty of naturalness.

READ
Museum of Cosmonautics in Moscow on VDNKh, expositions and address

The main attraction of the museum is the Cluny Mansion itself, walking around which you can immediately notice fragments of Roman stonework. All architectural details and decorations of the building were made at the time of the greatest expression of the Gothic style, which was already approaching its decline.

In the basement of the museum you can see the remains of three halls of Roman thermae: a hot one (caldarium), a warm one (tepidarium) and a cold one (frigidarium – for cooling in the summer heat). There are also large stone baths with decorative carvings.

The main treasure of the Cluny Museum is a cycle of six trellises, The Lady with the Unicorn, dating from the end of the XV century. A separate room is dedicated to it. Researchers differ in their interpretation of the subject and its allegories. Some believe that each of them allegorically represents a sensory sense (sight, taste, hearing), others believe that they describe the properties of perfect love (sincerity, joy). The tapestry itself, in spite of five centuries, has retained the clarity of the colors and gives an idea of medieval standards of beauty.

Particular attention should be paid to the collection of stained glass, which at one time adorned various cathedrals and castles. Each stained glass window is a certain story composition of pieces of colored glass.

Another important attraction of the Cluny Museum are the statues from Notre Dame Cathedral. On Robespierre’s orders, the stone Old Testament kings in the cathedral were beheaded, but it turned out that their heads were not destroyed. They were found in 1978 in the basement of the French Bank. Later the found fragments of the bodies of the kings were also brought to the museum (by that time their copies had been installed in the Cathedral of Notre Dame for a long time; it was decided not to change them). In addition to stone sculpture, the exhibits of the Museum of Cluny include many wooden statues of saints, which were popular in the Middle Ages as an object of religious veneration.

In addition to items of high art and glorious history, the museum houses many domestic exhibits – crockery, furniture, coins. There are also weapons and armor, as well as many religious items: monstrance, reliquaries, crosses, altars and more. 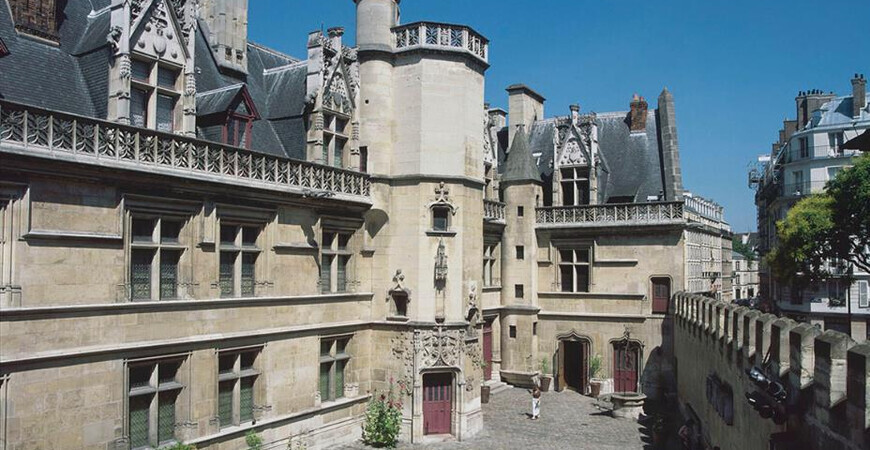 Cluny Museum (official name – National Museum of the Middle Ages) – is one of the most famous and ancient museums of Paris. It is located in the Latin Quarter, at the intersection of Boulevards Saint-Michel and Saint-Germain, within walking distance from the Seine promenade.

The place where the museum is located has more than a rich history. The site was home to Roman thermae before Christ, and when they fell into decay, the land was claimed by one of the richest abbeys in France, Cluny. Gradually the monks began to collect items of everyday use and religious items, and by the 19th century a vast collection was amassed, which was supplemented with private exhibits and works of art. So in 1874 the National Museum of the Middle Ages was opened.

All the exhibits of the museum are chronologically from the Middle Ages, which makes them unique in their own way. Among them are religious objects, icons, stained glass, everyday objects, statues made of stone and wood, as well as a rich collection of tapestries.

The museum of Cluny has a small exposition compared with the world’s museums, but its value and diversity are known far beyond the borders of Paris.

The first and main attraction of the museum that the visitor sees is the building where it is located: a Gothic medieval castle in which elements of Roman masonry can be seen, as it was built on the site of Roman thermae. The walls, floors and interiors have been preserved as close to the original as possible, making a casual walk through the rooms and floors of the castle memorable.

The museum of Cluny includes exhibits dating from the fifth to the fifteenth centuries AD, relating to various branches of life, and the inner courtyard is arranged in a type of medieval garden, where many of the plants grow, including medicinal plants, which were characteristic of the Middle Ages.

One of the unusual exhibitions of the museum is an exposition of wooden sculptures. Despite the short age of this material, the sculptures have survived to this day. Equally unique is the collection of sculptures (already made of stone) of biblical kings, which previously decorated the interiors of Notre Dame de Paris. They date from XI-XIV centuries and are exhibited on the lower floors of the museum, where previously there were Roman baths.

Learn more about each room and exhibit with the help of the audio guide, which is available in English, French, Spanish, Italian, and other languages. Russian is not one of them. Also in the halls there is an equipped stand with information about what is located there.

The Museum of Medieval Art in Paris has many exhibits of religious content, including jewelry and objects made of precious metals: reliquaries, parts of altars, chalices, candlesticks, crosses and more. The museum also has several exhibitions of everyday objects – tableware, furniture, coins, statuettes. Among them there is a very extensive collection of hair combs dating back to the 13th century.

One of the main exhibitions of the Cluny Museum is the collection of tapestries “The Lady with the Unicorn”, dating back to the fifteenth century. Scholars argue over the interpretation of the subjects: some argue that the canvases depict feelings in allegorical form (sight, hearing, etc.) Others are inclined to believe that the subjects convey feelings of love – joy, serenity or passion. Despite its antiquity, the colors of tapestries are preserved almost in pristine condition, which makes the exhibits and the room with them one of the most visited.

Equally rich is the collection of stained glass, which also has its own space. Their subjects are mostly religious, corresponding to the spirit of the time, but there are quite a few images and military scenes, the heroes of which are kings and the heads of state. Halls with tapestries and stained-glass windows are characteristically illuminated: the light around the perimeter has a muted shade, while inside the exhibits it is bright, which allows not only to feel the atmosphere of the era, but also to examine the works of art in detail. With this kind of backlighting, every fragment of the exhibit can be seen.

Fans of military history may be interested in the hall, where objects of the age of knights are placed. Here you can see armor from different times and countries of Europe, weapons, as well as horse harness and other items related to the life of knights and the art of war.

There is also a book and souvenir store, where you can buy a lot of items and brochures. The merchandise includes books on medieval art, audio CDs with medieval music, as well as trinkets, postcards, puzzles and other products.

Ticket prices for the Cluny Museum in 2022

The cost of a ticket to the Museum of Medieval Art in Cluny depends on the age of the visitor and is for a full day – from 09:30 to 18:15, the ticket office until 17:30 (Monday – day off). At the same time, the ticket office stops working half an hour before closing the museum.

Admission to the Cluny Museum is free to persons under 18 years of age (European Union citizens under 26 years of age).

The museum also holds a kind of open house. On the first Sunday of each month entrance to the museum is free for all visitors.

The cost of tickets may vary. Before visiting it is recommended to get current information on the official website of the Cluny Museum in Paris.

How to get to the Musee de Cluny in Paris

Cluny Museum of Medieval Art is located in one of the most touristic and central areas of Paris – the Latin Quarter, so it is not difficult to get to it.

There are several options for this. The first option (the fastest and most convenient) is a suburban train RER, lines of which are partially combined with the subway. The nearest subway station to the museum is La Sorbonne (line M10). From it to the entrance to the museum – no more than 5 minutes walk. The RER station is a little further and is called Saint-Michel (line C). Travel time is about 10-12 minutes.

To get to the museum of Cluny you can also by car: there is parking at the entrance, or take a cab: Uber and KiwiTaxi will help to save money on a trip through the city.