The Congo is one of the largest and most full-flowing rivers in Africa. The jungle on its banks allows you to get closer to the world of wildlife.

If you are planning a tour of wild Africa, it is worth finding out where the Congo River is located – the most full and deep water artery of the “black” continent. On the mainland it is inferior in length only to the famous Nile: its length is just over 4370 km.

The Congo is famous for being the only river in the world which crosses the equator twice. In some places, the depth of the river exceeds 200 m, which has given rise to numerous legends of mythical monsters allegedly living in it.

The basin area of the famous wild river exceeds 4,000,000 km2 . The water flow of this largest waterway in Africa is more than 41,000 m 3 /s. It is located mostly on the territory of the state of the same name. However, a more detailed study of the location of the Congo River on the map shows that in a certain area it flows on the border with Angola.

Information about the origins of the river is quite contradictory. Researchers can not come to a definite conclusion where the river originates. At present, there are two officially accepted versions:

Among the interesting facts about the Congo, it is worth mentioning that the water artery has two names. Its upper course (up to the locality of Kisangani) is called by the locals the same as its possible source – Lualaba.

The upper course of the Congo has many rapids and waterfalls, seriously complicating navigation. The largest waterfall (height about 500 m) it forms in the Nzilo Gorge, located in the southern foothills of the Mitumba Mountains. It alternates between rough stretches and leisurely flows, and after Stanley Falls, near the equator, it carries its waters smoothly and evenly. Here its banks are rather low and marshy, and in some places the distance between them is up to 10-15 km, which allows speaking about the formation of natural lakes.

READ
6 scariest places in the world, a creepy selection

In the lower reaches of the river flows through the territory of the South Guinea Plateau, and the banks are rocky and precipitous (their height up to 500 m). Between settlements Kinshasa and Matadi Congo forms the famous Livingstone Falls, the considerable depth of which earned her fame as the most full-flowing river in Africa.

The most important right tributaries of the waterway are:

Left tributaries of the Congo include the Kasai, Lulongo, Ruki, Lomami (in the middle part), and Inkisi (in the lower parts). It is intuitively clear where the river flows into: its streams mix with the waters of the Atlantic.

The entire Congo Basin has a tropical equatorial climate. The average annual temperature is +25-28 ° C, but during the summer months the thermometer often rises to +30 ° C. The rainy season is in March-April and October-December and the total amount of precipitation reaches 2000 mm a year.

Almost everywhere the Congo coast is covered with equatorial forests. In the jungle you can find such unique representatives of African flora, as mahogany, guava, eucalyptus, ebony. Many evergreen shrubs grow here, and the height of some trees reaches 70 m.

The river basin is home to herds of gazelles, zebras and giraffes, which are often hunted by nimble cheetahs. Elephants, hippos, and hairy wild boars often come to the waterhole, while anthropomorphic gorillas can be found in the jungle. The world of reptiles and insects on the banks of the Congo is impressive, with crocodiles, poisonous spiders, water pythons, and cobras. The depths of the river are also inhabitable: while fishing, you can catch predatory tiger fish of enormous size, catfish, Nile perch, barbel, freshwater herring, and mormerops.

Tiger fish can be up to 2 meters long and weigh as much as 70-80 kilograms, so caution should be exercised when hunting them.

You can choose Congo River tours in two different directions:

READ
The Kimberlite Pipe, the largest hole on the planet

You can get to the Democratic Republic of the Congo and see the natural beauty of the river by buying a ticket for a transit flight to Kinshasa. There are no direct flights to Moscow, so you must change planes in Zurich, Paris, Rome, Lisbon or Brussels. Flying cost is quite high – 1000 USD – 1500 USD round trip.

After arriving, you can go straight to the state capital, Brazzaville, by buying a ferry ticket for 5 USD – 15 USD. The trip will not take more than 20 minutes, but you should arrive about an hour before the departure of the ship to go through passport and customs control.

There are also ferries from Kinshasa to Bangui (Central African Republic). They run only 2-3 times a month, covering a huge distance of over 1,000 km upriver and stopping at all the major population centers. This is a great opportunity to explore the geography of the Congo more closely. A ferry ticket will cost from 9,000 CFA (seat on deck) to 70,000 CFA (first class cabin).

The Congo River is one of Africa’s most amazing natural attractions, so it deserves detailed study by true travel connoisseurs.

The continent “Without Cold,” as the ancient Greeks called Africa, is second in size after Eurasia and is home to the full-flowing and deepest rivers on Earth. One of these was the water artery flowing in the heart of Africa, the Congo River. It has acquired many honorary titles:

The pioneer of the famous river in the XV century was the explorer of the “black continent” Diogo Can – a native of Portugal. 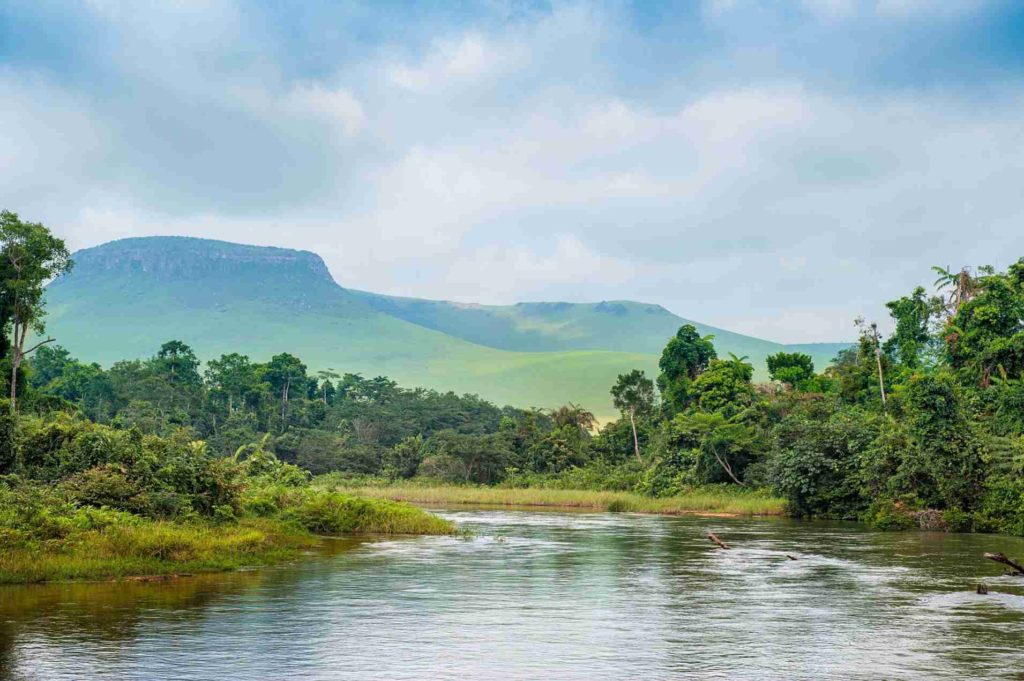 The river flows through Central Africa and spills over the territory of the Democratic Republic of the Congo and forms the irrevocable boundary between the Republic and Angola.

For more than 4,700 km the river makes its way through the mountain ranges and plateaus before reaching the Atlantic Ocean. It is customary to divide the course of the Congo into upper, middle and lower reaches:

The deep river flows into the Atlantic Ocean near the settlement of Banana and forms a flooded estuary, extending up to 11 kilometers. The flow of the Congo in the ocean water can be felt 17 km away from the place where the fresh and salt water meet.

The most significant tributaries of the Congo River are: 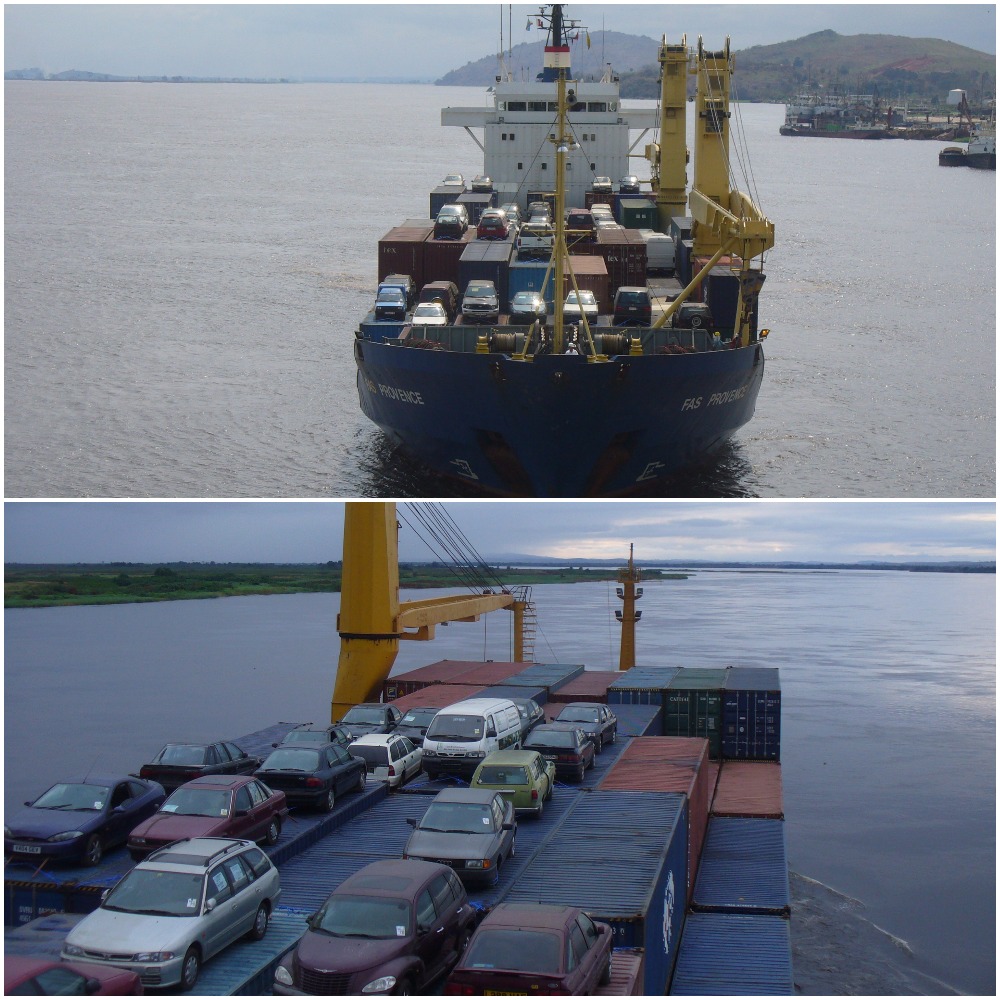 Characteristics of the Congo River in numbers

The deepest river in the world has a steep temperament and expresses the admirable power and beauty of the world. The numerical information about its geographical parameters is impressive and paints a more complete picture of the Congo:

READ
The loneliest ship of the desert

The navigable system includes the whole basin of the river, making its branched structure. The total length of the tracks is more than 20 thousand kilometers. Thousands of transport ships pass through the shipping lanes every day.

The animal and plant life of the Congo River 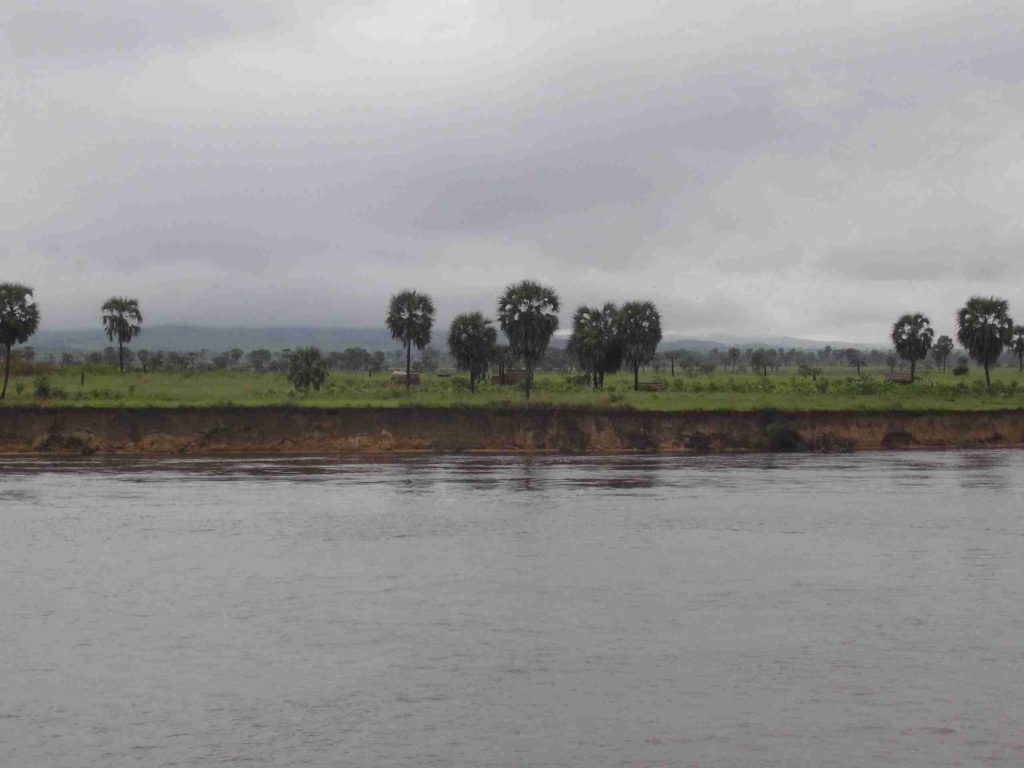 Central Africa’s long waterway is stunning in its splendor and diversity of fauna and flora: its banks are covered by tropical jungle, home to more than 600 species of trees and more than ten thousand classes of animals.

Despite the mass extermination of animals of the African continent, the fauna of the Congo Basin is rich in species of wild animals:

Variety of birds and reptiles, especially reptiles. In the warm waters of the Congo are crocodiles.

The Blue Highway of Africa is famous for its unique fishing, because its character varies along the way: in the beginning – it is shallow and narrow, further – rough and rushing, below – the formation of lakes and leisurely flowing stream.

Water temperature reaches thirty degrees Celsius, which contributes to the development of a large number of river microorganisms, which are excellent food for fish.

Here you can catch catfish, mormirops, Nile perch, but most of all fishermen are eager to pull a unique fish out of the water – the Tiger Goliath. The Latin name characterizes this creature best – a giant water dog with sharp fangs, size up to one and a half meters and weighing up to seventy kilograms. This “dog” is characterized by beautiful shimmering silver-gold scales. Its meat tastes, according to fishermen, like pike-perch.

The vegetation of the Congo forms a strong block of rain forests with a tree canopy of about 35 meters, with pinnacles trees reaching the 60-meter mark. They do not shed their leaves and are characterized by the presence of evergreen crowns. The jungles of the Congo are called the “lungs of the planet.” The main large trees are astonishing in their power, uncommonness and exotic beauty:

READ
Ojos del Salado, the highest volcano in the world

Herbaceous species of vegetation prevail in swampy flooded areas, the most numerous of which is papyrus.

The dry sandy valleys of the Congo River are covered with thickets of stunted trees and cereal grasses.

The Congo River on a Map of Africa

A map of Africa shows the path that the Congo River takes across the expanse of the equatorial part of the continent: from the East African Plateau to the Atlantic Ocean.

Environmental issues of the Congo River

The environmental deterioration of the river basin is due to several circumstances: