Copacabana is one of the most famous beaches in the world. It is located in Rio de Janeiro on the Atlantic coast, near the entrance to Guanabara Bay. This beautiful beach with an average width of about 100 meters stretches for 4 kilometers. Every day it warms and entertains thousands of people, locals and tourists alike.

There is nothing better than in the morning to smell the ocean, hear its gentle whisper, enjoy the breeze. And instead of the usual shower just bathe in the pleasant sea waves. Strangely enough, but this is not a fantasy, it’s reality, and for many coastal cities of the planet. At least for Rio de Janeiro in Brazil, it has long been an everyday occurrence. After all, here the hotels and residential high-rise practically rest against the Atlantic Ocean, leaving only a strip of luxurious sandy beaches between them and the surf. The beaches in these areas are invariably popular. But it is Copacabana which is the most famous of them.

Copacabana Beach on the map

Geographic coordinates ( -22.972638, -43.184211 ) Distances from Brasilia, the capital of Brazil are approximately 950 km as a straight line from the nearest airport Santos Dumont about 7 km north

Copacabana is not just the beach, but also the neighborhood of the same name in Rio de Janeiro, which is located right behind the beach. The district covers an area of just under 8 km2 . About 160,000 people live here, with about 27% of them people over the age of 60.

On the outer side of Copacabana Beach runs the famous Avenida Atlántica, where mass events, festivals, concerts and sports competitions are held every year. 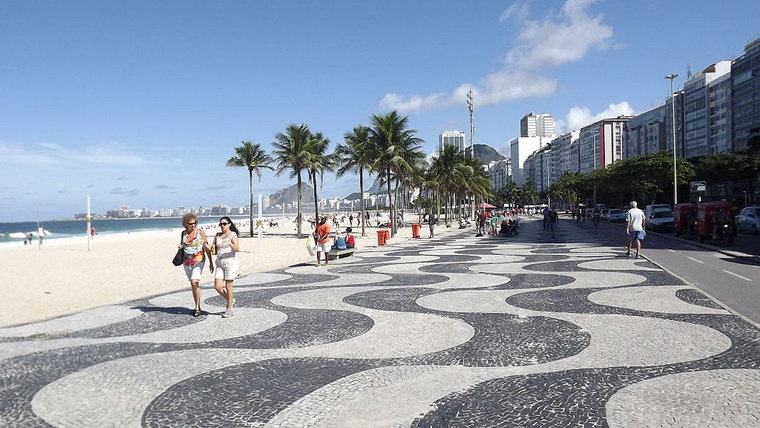 The Avenida Atlántica promenade is quite a cozy place to stroll

Interesting fact – The Beach is famous for its mass outdoor concerts. In 2006, the concert of the famous band Rolling Stones here gathered about 2 million people. The concert was broadcasted live. But that’s not all. At various times the Copacabana Beach has hosted performances by famous musicians including Mick Jagger, Elton John and Lenny Kravitz. But the record holder was Rod Stewart’s performance in 1994. At the time, there were more than 4 million people on the beach. That concert even made it into the Guinness Book of World Records.

Sand sculpture festivals held on the beach invariably enthrall the many visitors. 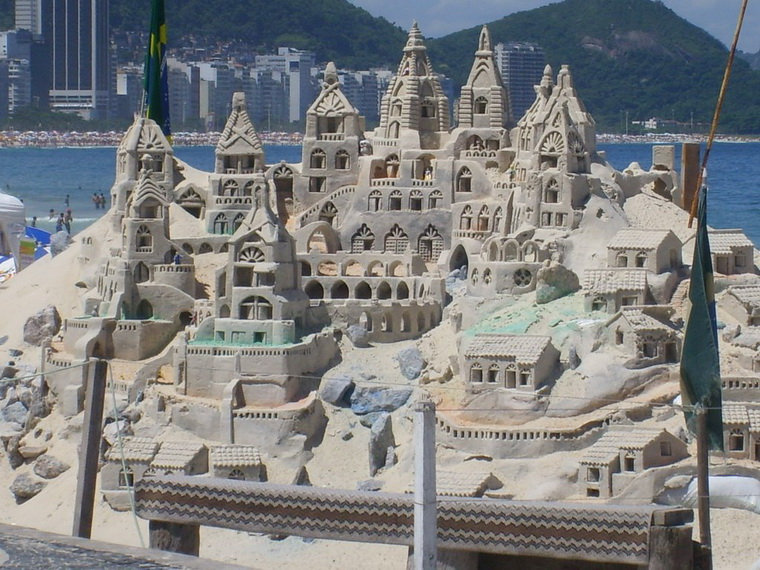 A sand castle on Copacabana Beach

The fireworks in Rio de Janeiro during New Year’s celebrations are one of the largest in the world. It lasts 15 to 20 minutes.

About 2 million people go to Copacabana Beach to see this unforgettable spectacle. The festival is accompanied by a concert, which takes place all night.

This celebration of life has become one of the most important tourist attractions of the city and the beach. Such an event attracts both locals and travelers from all over the world. As a rule, city hotels are fully booked at this time. 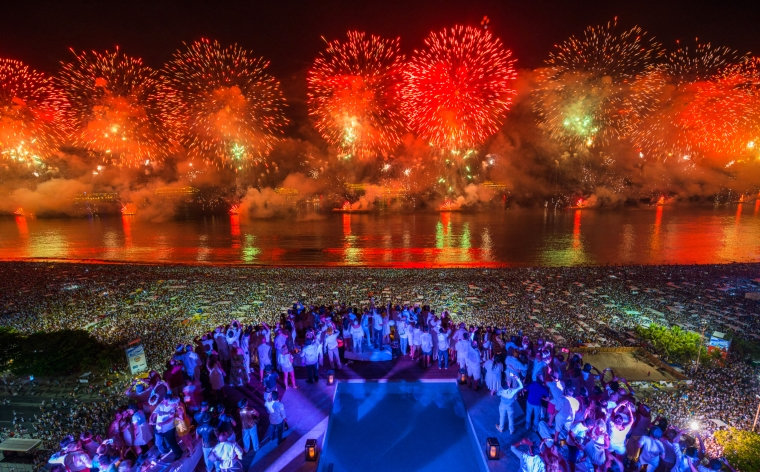 The traffic on the beach does not stop for a minute. All year round, at any time of the day or night, there is a lot of activity. At night, both Avenida Atlantic and part of the beach are illuminated.

More than 40 different bus routes pass through Copacabana. There are three metro stations in the area: Cantagalo, Siqueira Campos and Cardeal Arcoverde. 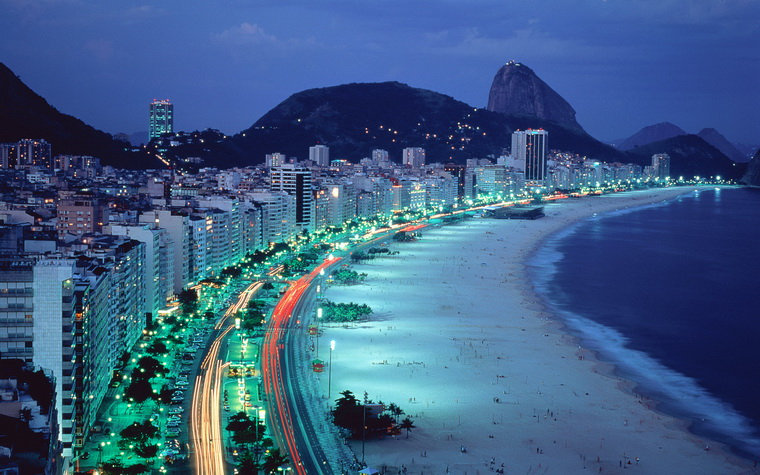 Where the name Copacabana came from is not accurately known.

There are several speculations. In the mid-18th century, the Chapel of the Holy Virgin of Copacabana in Bolivia was built in this area. A little later, a fishing village appeared in this area. It became known as Copacabana.

According to some reports, the word Copacabana comes from the words copac and cabana, which in Quechua Indian language can be translated as “blue beach.

Another version is that it comes from kopa and kahuana, which the Aymara language translates as “view of the lake. There is also a suggestion that the origin of the name is associated with the fertility god Cotacavana, who often appeared in the ancient mythology of the Indians who lived in the foothills of the Andes. 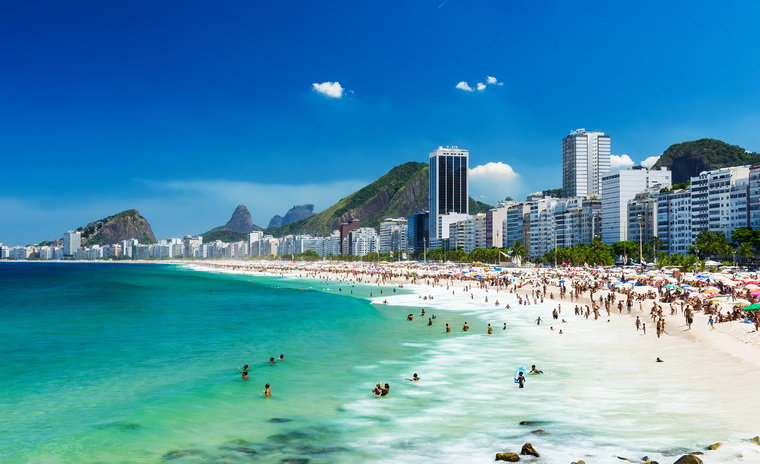 Pros and cons of Copacabana

Beautiful and untouched by civilization beach has been here since ancient times, but its development by man began only in the 20th century. Almost immediately it became very popular among the local elite. Poets, artists, actors, politicians and just rich people lived in the prestigious Copacabana area.

However, we must add that crime has increased here recently. Drug addiction and robbery have greatly reduced the popularity of the place.

Unfortunately, Copacabana beach is among the most dangerous beaches in the world. There are robberies, kidnapping and sharks, which periodically appear in the waters of the beach. Even the occasional sea pirate. According to police data, the Copacabana area is home to the largest number of drug lords and major mafia bosses.

Fun fact – When Rio de Janeiro was the capital of Brazil, Copacabana was considered one of its best areas

Now all the hotels located near Copacabana Beach provide maximum security for their guests and excellent service. Holiday every day, chic beach and endless ocean – this already provides Copacabana. Despite this, tourists should still be vigilant. 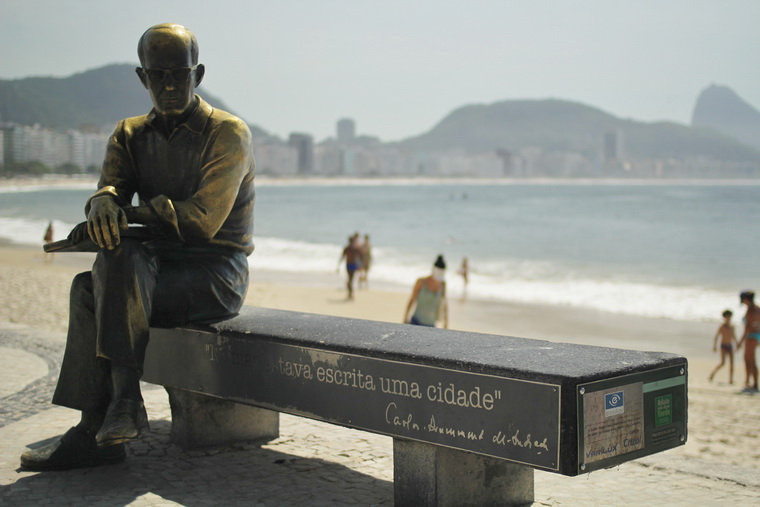 Not far from the statue on a small promontory is Fort Copacabana, built in the early 20th century and part of the Coast Guard complex. 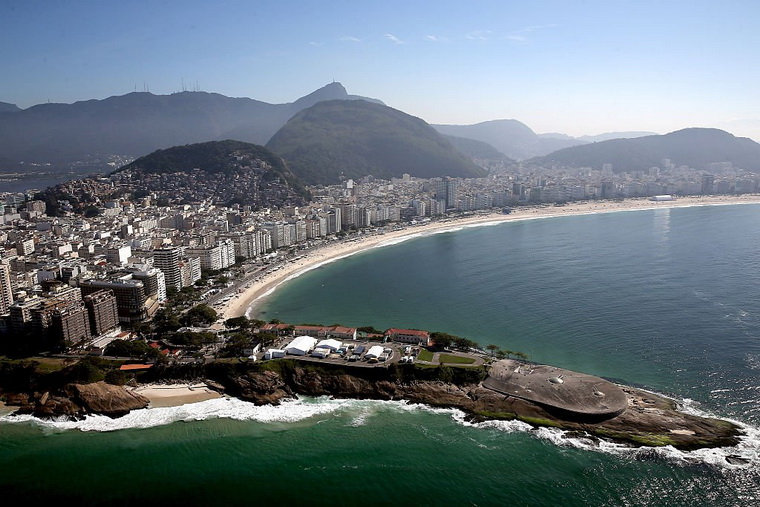 Fort Copacabana defenses on the promontory

At the north end of the beach there is Fort Duque de Caxias (originally Duque de Caxias) built in 1779 to defend against Spanish attack. There is also, 250 meters to the west, a sculpture dedicated to Clarice Lispector, one of the most famous writers of Brazil. 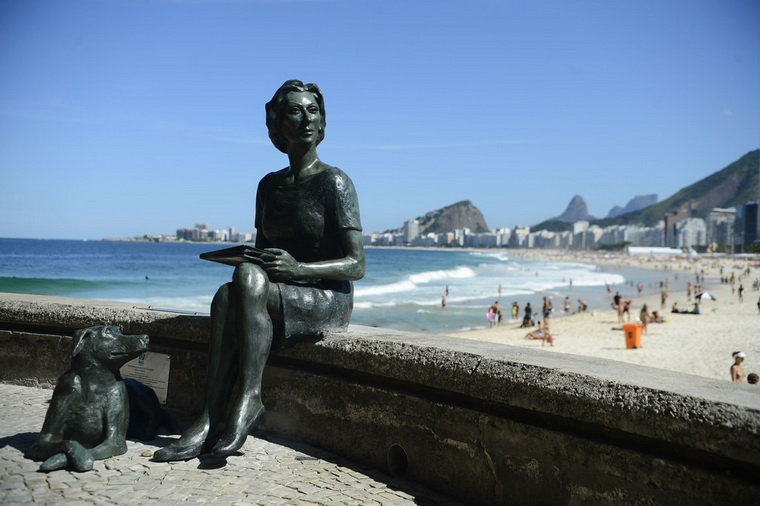 Just off the beach is perhaps the most famous and recognizable symbol of Rio de Janeiro and the whole of Brazil, the Statue of Christ the Redeemer on Mount Corcovado.

If you have time (and you just have to find it somewhere to visit this attraction), don’t forget to visit another Rio de Janeiro attraction, the famous Celaron Stairs. It is located 6 km in a straight line north of the beach.

An interesting fact is that on April 26, 1949, the ship Magdalena broke in two when she was being towed in the harbor of Rio de Janeiro. Most of her cargo of oranges washed up on Copacabana Beach. By the way, it was the first and only voyage of the ship. Apart from oranges and frozen meat, no one was injured in this wreck. 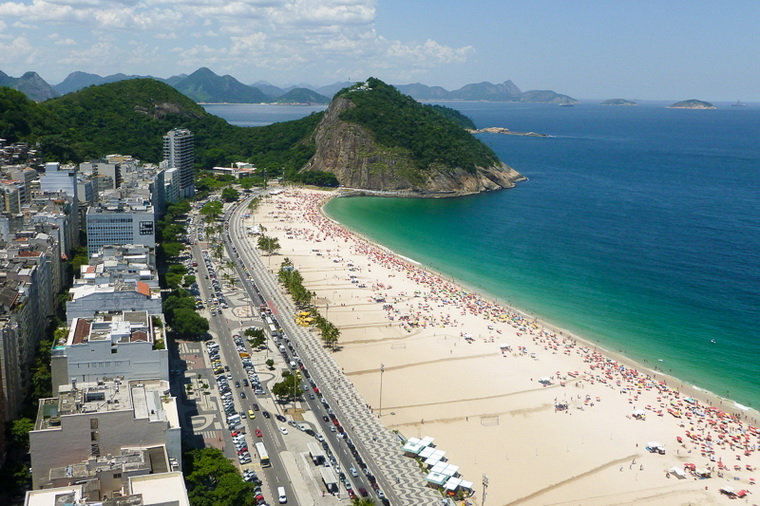 In August 2016, Copacabana Beach was the site of the beach volleyball tournament at the 31st Summer Olympics in Rio

Copacabana Beach is a 4 km long strip of white sand along the Atlantic Ocean at the entrance to Guanabara Bay, in Rio de Janeiro, Brazil. This place in the 50s and 60s was popular with European bohemians, and later became an elite area inhabited by businessmen, politicians and just wealthy people. It was at the peak of its popularity that Copacabana was built up with cafes, stores, casinos, upscale hotels and penthouses. Located 5 km from the center of Rio, the Avenida Atlantic promenade is still of interest to visitors today. During the high season, getting to the water is difficult, but possible. You have to cross several volleyball courts, a soccer field, and, stepping over the tanned bodies of the pretty Brazilian girls, finally reach the cool waters of the ocean.

The beach was originally the site of a fishing settlement. In the mid-18th century, a chapel was built here, named after the Bolivian maiden from the town of Copacabana. Soon the village itself was renamed from Saquenapan to Copacabana. The coastal area became a full-fledged part of Rio de Janeiro at the end of the nineteenth century after the launch of the streetcar through the Real Grandes Tunnel. At the beginning of the twentieth century, the Avenida Atlántica waterfront was built. Today it is annually visited by 3 million tourists. And the locals call Copacabana beach “princess of the sea”. And for good reason, because according to a popular online magazine AskMen, the beach was voted one of the most beautiful on earth, which harmoniously combines the tropical exotic and urban landscapes of Rio.

A beautiful and old hotel on the coast is the five-star Copacabana Palace. The rooms are in classic English style and furnished with antique furniture. The bathrooms are marble, and the beds in each suite are king-size. The hotel has 3 restaurants and a wellness spa. A double suite overlooking the beach will cost $599 USD.

There are also more economical options. For example, the Windsor Copa Hotel is only 300 meters from the beach. Each room has an LCD TV, minibar, bathroom with hairdryer, work desk and free WiFi. Breakfast is a buffet with fruits and juices. A gym is at the guests’ disposal. The price of a standard double room is 113 USD.

A small café on the waterfront

Copacabana Beach has a variety of cafes, bars, restaurants and eateries. The rodosío restaurant Carretão is considered a cult institution. Here you can try typical Brazilian dishes, such as feijoada – pork with black bean stew. If you prefer the retro style of the interior, welcome to Copacabana. It recreates the atmosphere of the fifties, when the beach was a favorite place for bohemians. Be sure to order a caipirinha, a refreshing alcoholic cocktail of lemon, lime, ice, cane sugar and cachaça. But be careful – it gets you drunk fast!

On the waterfront, next to the five-star hotel Sorasabana Palace, there is a restaurant Churascaria. This place has an excellent price-quality ratio. For only 35 USD you can have a hearty meal, since you only pay for entrance, drinks and desserts. And waiters put main courses on the plate for free as long as diners don’t stop them. Salads, sushi, rolls, salmon tartare, beef carpaccio and more are delicious and fresh.

All year round Copacabana is buzzing with life, never dying down. Everyone can find an activity to his or her liking. Whether you’re an outdoorsman or a beach volleyball fan, here they can try their hand at surfing or beach volleyball. And soccer fans will be able to enjoy the game of their favorite team, because tournaments are often held here. In 2016, Rio will host the Olympics. Some types of competitions will traditionally be held on the beach.

Guys with skimboards An entertaining walk on the beach

From November to April, Copacabana is in high season. Millions of tourists come here to see an unforgettable New Year and the famous Brazilian Carnival. The beach also serves as a concert venue for world famous musicians. Lenny Kravitz, Mick Jagger and Elton John have all performed here. In 1994, the Rod Stewart concert made it into the Guinness Book of World Records as the biggest show on the planet.

The nightlife at Avenida Atlantic is more intense than the daytime. Disco 2A2 is a popular spot among young people. Another of its competitors is Club Six. It is visited not only by visitors, but also by locals. The establishment has five bars and three dance floors.