Copacabana Beach is a 4 km long strip of white sand along the Atlantic Ocean at the entrance to Guanabara Bay, in Rio de Janeiro, Brazil. This place in the 50s and 60s was popular with European bohemians, and later became an elite area inhabited by businessmen, politicians and just wealthy people. It was at the peak of its popularity that Copacabana was built up with cafes, stores, casinos, upscale hotels and penthouses. Located 5 km from the center of Rio, the Avenida Atlantic promenade is still of interest to visitors today. During the high season, getting to the water is difficult, but possible. You have to cross several volleyball courts, a soccer field, and, stepping over the tanned bodies of the pretty Brazilian girls, finally reach the cool waters of the ocean.

The beach was originally the site of a fishing settlement. In the mid-18th century, a chapel was built here, named after the Bolivian maiden from the town of Copacabana. Soon the village itself was renamed from Saquenapan to Copacabana. The coastal area became a full-fledged part of Rio de Janeiro at the end of the nineteenth century after the launch of the streetcar through the Real Grandes Tunnel. At the beginning of the twentieth century, the Avenida Atlántica waterfront was built. Today it is annually visited by 3 million tourists. And the locals call Copacabana beach “princess of the sea”. And for good reason, because according to a popular online magazine AskMen, the beach was voted one of the most beautiful on earth, which harmoniously combines the tropical exotic and urban landscapes of Rio.

A beautiful and old hotel on the coast is the five-star Copacabana Palace. The rooms are in classic English style and furnished with antique furniture. The bathrooms are marble, and the beds in each suite are king-size. The hotel has 3 restaurants and a wellness spa. A double suite overlooking the beach will cost $599 USD.

READ
Bay of Balos in Crete, How to get there by car

There are also more economical options. For example, the Windsor Copa Hotel is only 300 meters from the beach. Each room has an LCD TV, minibar, bathroom with hairdryer, work desk and free WiFi. Breakfast is a buffet with fruits and juices. A gym is at the guests’ disposal. The price of a standard double room is 113 USD.

A small café on the waterfront

Copacabana Beach has many different cafes, bars, restaurants and eateries. The rodosio restaurant Carretao is considered a cult institution. Here you can try typical Brazilian dishes, such as feijoada – pork with black bean stew. If you prefer the retro style of the interior, welcome to Copacabana. It recreates the atmosphere of the fifties, when the beach was a favorite place for bohemians. Be sure to order a caipirinha, a refreshing alcoholic cocktail of lemon, lime, ice, cane sugar and cachaça. But beware, it gets you drunk quickly!

On the waterfront, next to the five-star hotel Sorasabana Palace, there is a restaurant “Churascaria”. This place has an excellent price-quality ratio. For only 35 USD you can have a hearty meal, since you only pay for entrance, drinks and desserts. And waiters put main courses on the plate for free as long as diners don’t stop them. Salads, sushi, rolls, salmon tartare, beef carpaccio and more are delicious and fresh.

All year round Copacabana is buzzing with life, never dying down. Everyone can find an activity to his or her liking. Whether you’re an outdoorsman or a beach volleyball fan, here you can try your hand at surfing and beach volleyball. And soccer fans will be able to enjoy the game of their favorite team, because tournaments are often held here. In 2016, Rio will host the Olympics. Some types of competitions will traditionally be held on the beach.

READ
Croatia's best beaches for vacations with or without children

Guys with skimboards An entertaining walk on the beach

From November to April, Copacabana is in high season. Millions of tourists come here to see an unforgettable New Year and the famous Brazilian Carnival. The beach also acts as a concert venue for world famous musicians. Lenny Kravitz, Mick Jagger and Elton John have all performed here. In 1994, the Rod Stewart concert made it into the Guinness Book of World Records as the biggest show on the planet.

The nightlife at Avenida Atlantic is more intense than the daytime. Disco 2A2 is a popular spot among young people. Another of its competitors is Club Six. It is frequented not only by visitors, but also by locals. The establishment has five bars and three dance floors.

On a trip to Brazil in January 2018, we stayed in Rio de Janeiro at a hotel in the Copacabana area. Just a five-minute walk from the hotel was one of the city’s two most famous beaches with the same name, Copacabana, so we found ourselves at this beach every day after sightseeing in Rio.

The first thing that catches your eye when approaching the beach is the paving tiles in the shape of waves. Laying tiles in the form of different patterns is a typical Portuguese thing, which can be seen in many squares in the cities of Portugal, and brought this tradition to Brazil as well by the colonizers. It looks very beautiful, every time I walked along the beach I took pictures of the tiles. 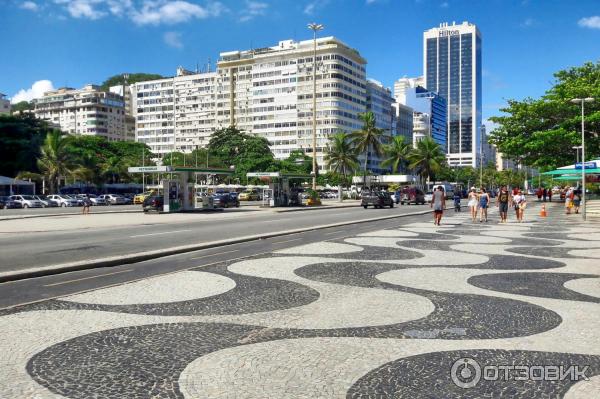 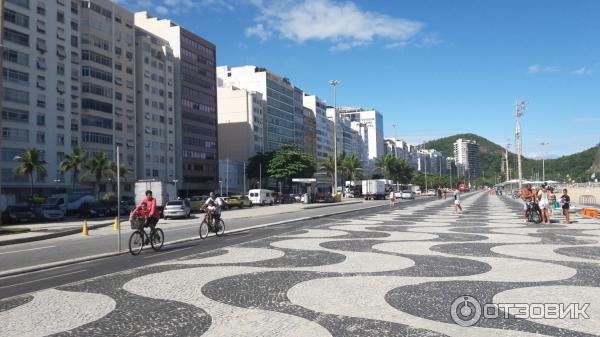 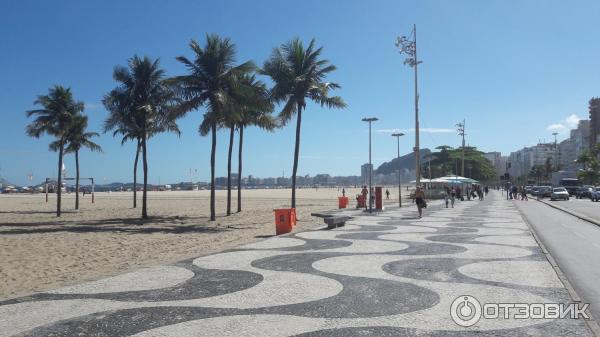 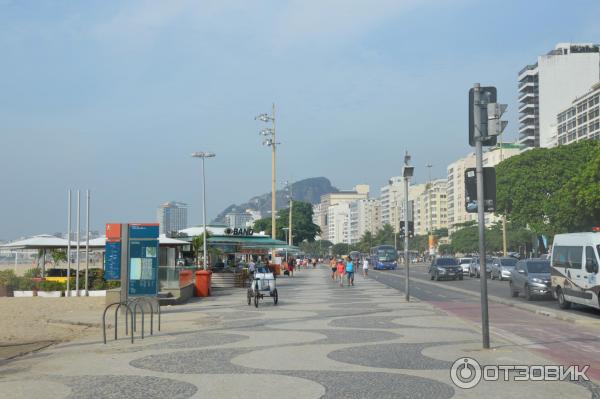 The promenade along the beach is very long (about 4 km), it is nice to walk or ride a bike here, as there is a bicycle lane along it, separated both from the pedestrian area and from the roadway. There are usually a lot of people here, there are small cafes, in addition, street vendors sell various souvenirs, beach shoes, snacks and drinks, tours of Rio and other places. 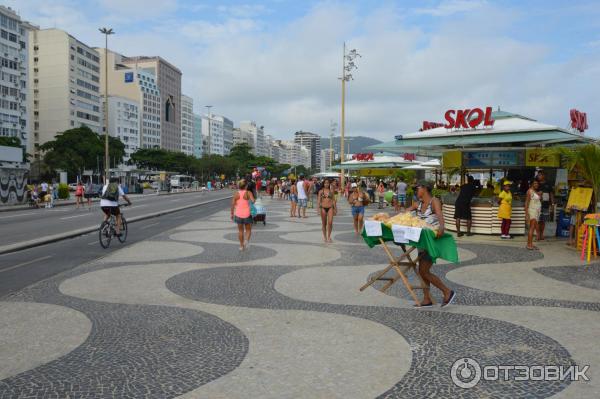 The high-rise buildings along the road are mostly hotels, some are apartments of citizens, quite expensive, because they are literally a three-minute walk from the ocean. 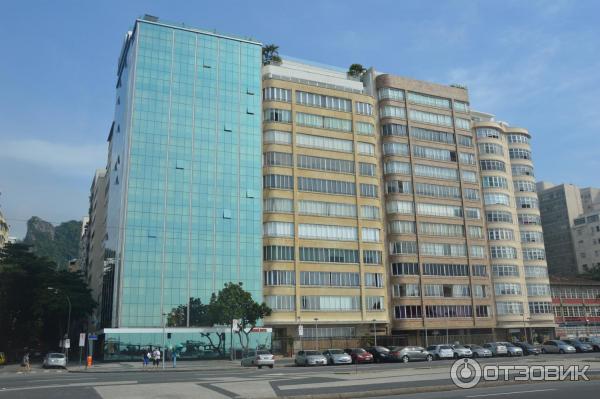 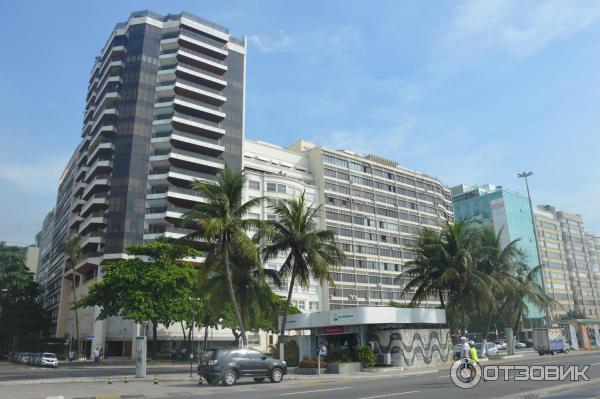 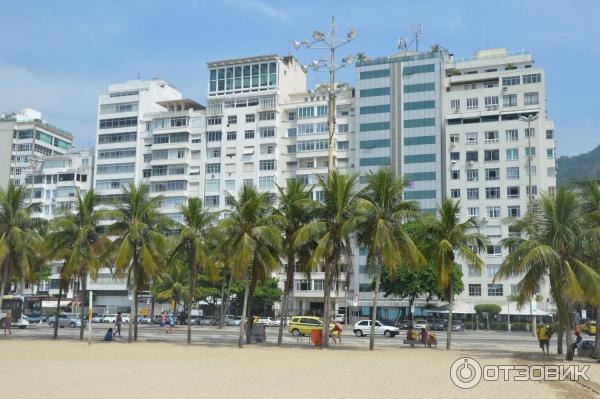 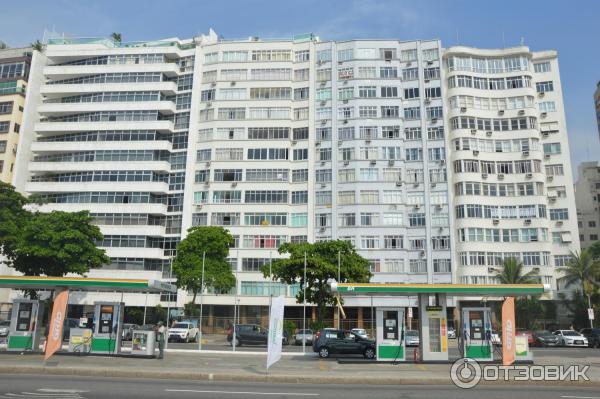 You can see the gas station in the photo above. When I took the picture with my camera, the gas station attendant started waving at me across the street, shouting and gesturing for me to hide my camera out of harm’s way. Due to the fact that the Copacabana area has favelas along the beach, there are frequent muggings by criminals who can rob tourists – muggings with guns and knives are not uncommon here, so don’t wear expensive jewelry (as well as inexpensive), and it is advisable to either leave your camera at the hotel, or hide it in a backpack. Despite the large number of people and tourists here, you should always be on the lookout.

Walking along the promenade, at the entrance to the beach you can see various installations made of sand, made by locals so that tourists are photographed here for money: 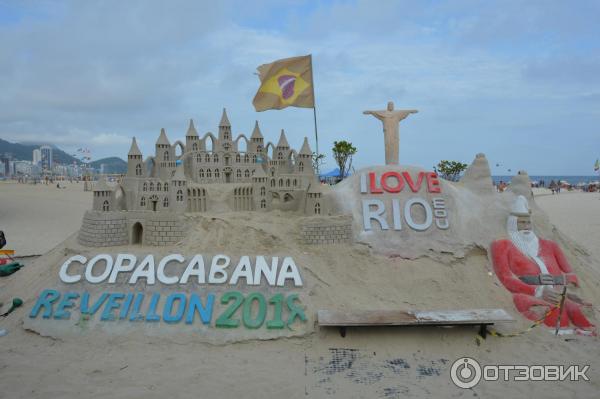 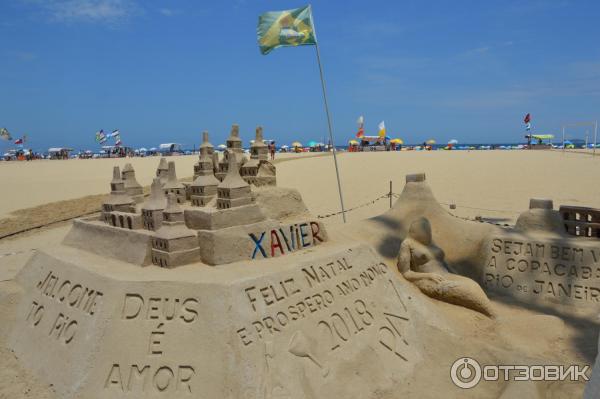 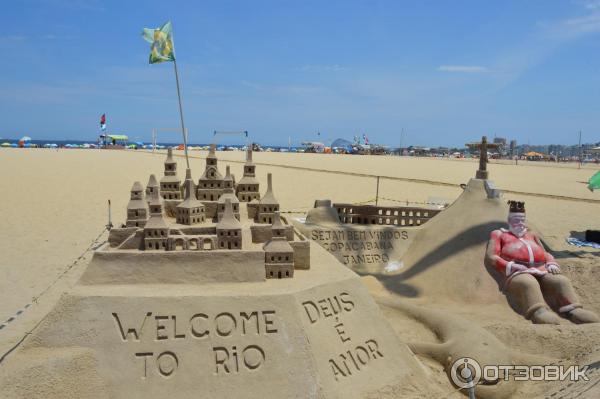 I really liked the beach; it’s wide, long, and sandy. The water temperature in the Atlantic Ocean here in mid-January/early February was comfortable enough for me, and I’m a chilly person.

There are a lot of people on the beach on weekends, it looks like this: 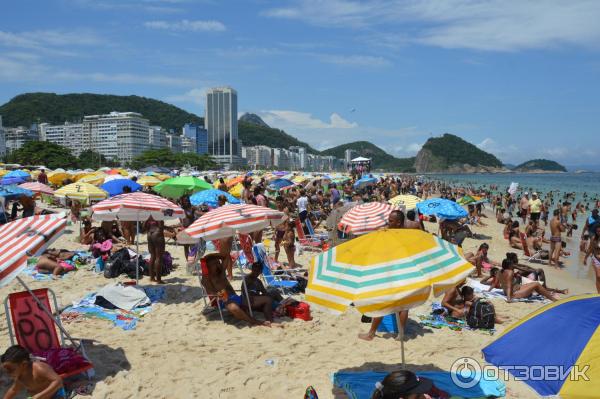 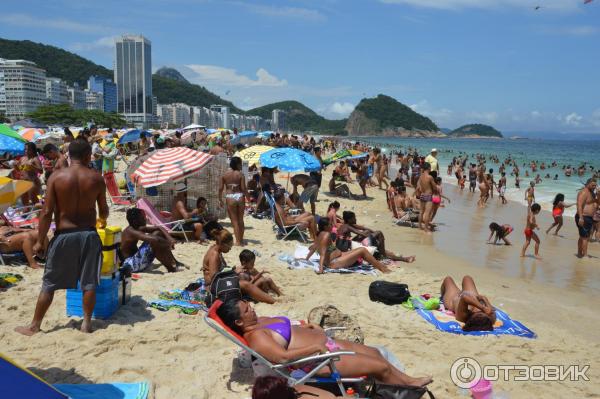 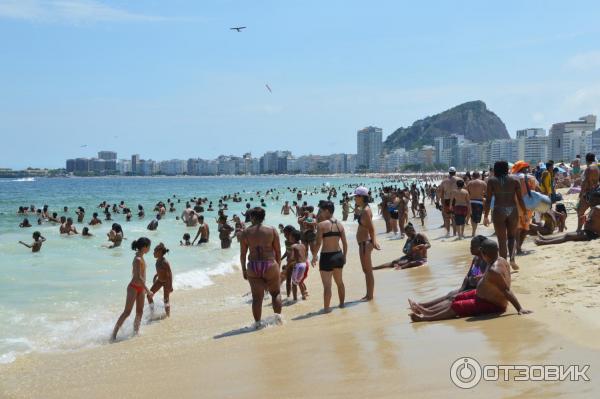 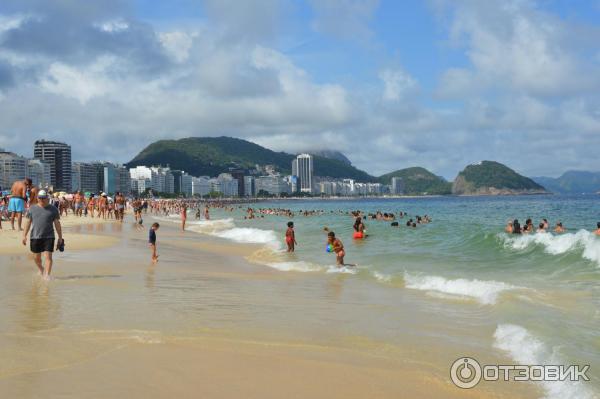 While on the beach on a day off, we witnessed the following scene. A girl was lying on a blanket and looking at her phone screen. A beverage vendor walked by, she put her phone on the bedspread and pulled out her wallet to buy something from him. At that moment, a guy walked by, who quickly bent down, picked up his phone and would have gone on, but he was called out by a girl from a nearby bedspread and told to put the phone back down. He just put it back and calmly walked away. It was all very mundane, such a thief if possible it was, it did not work and well, at least he did not try to run away (though, the people were sea, he would have caught and arrested quickly, if the girls would have raised a shout). In any case, it’s another warning to be more careful and watchful here. We took turns to swim on this beach so we didn’t leave our stuff behind.

READ
The best beaches of Santorini, white and black sand

There are many vendors walking on the beach selling various soft drinks, alcoholic cocktails, fruit, coconuts, various snacks, ice cream, as well as beach towels, pareos, swimsuits, bathing suits, flip flops, blankets. Here we bought very nice beach blankets and also tried a dessert made of dark purple fruits of the local açai palm (which I did not like very much, frankly). 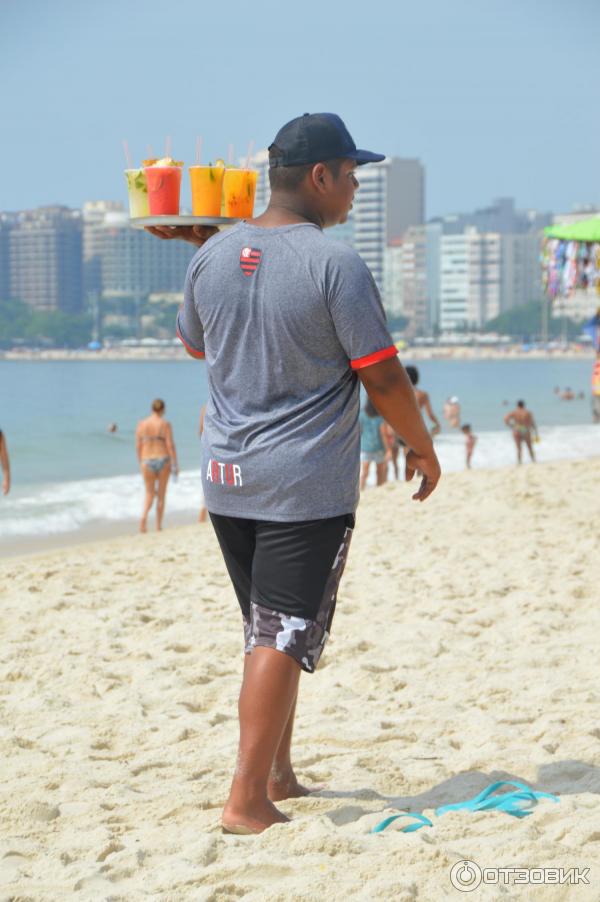 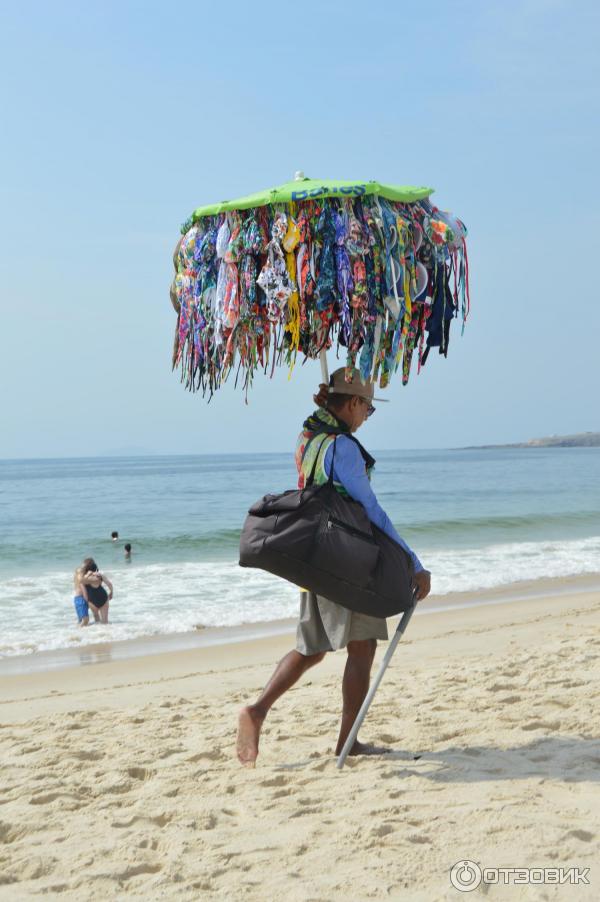 Copacabana beach is also nice to stroll along in the evening, we watched beautiful sunsets here a couple of times: 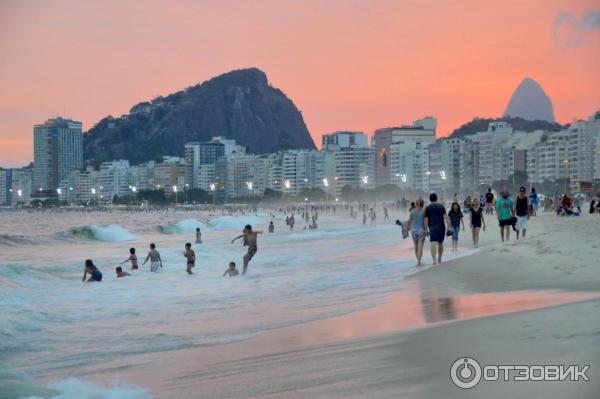 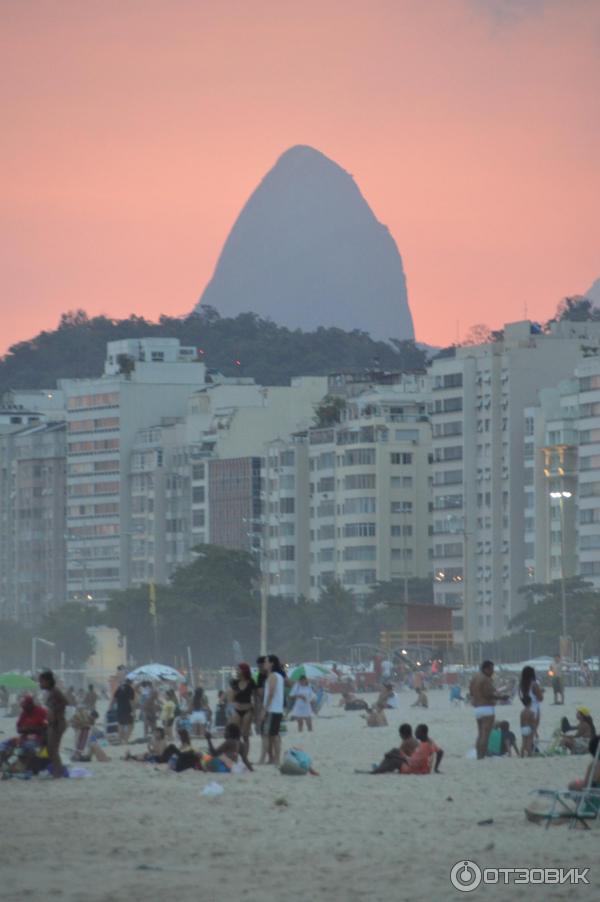 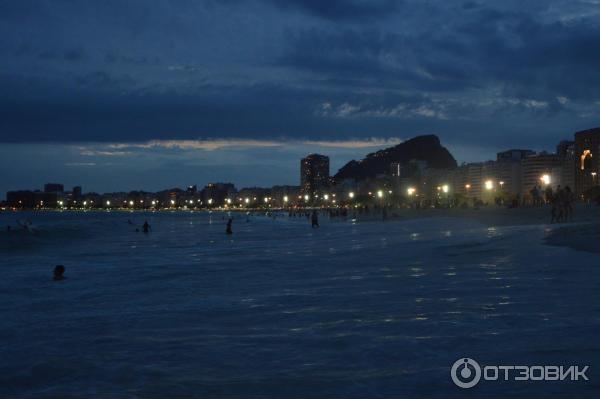 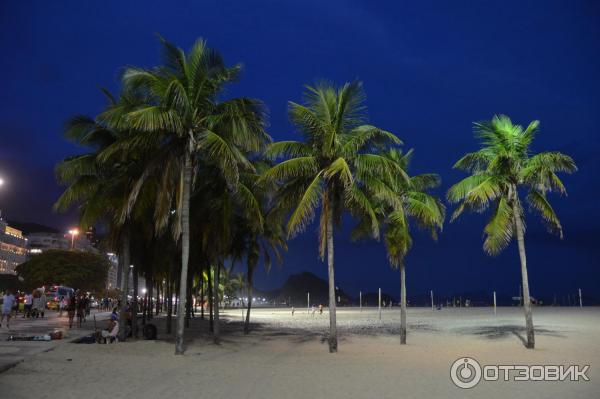 After Rio de Janeiro, we headed for a beach vacation in the town of Buzios for a few days and then I went back to Rio for 3 days before flying back. This time I stayed in Copacabana again, but in another hotel with a rooftop pool and a viewing platform (this was the principle I used when choosing a hotel), and there was a good view of the beach: 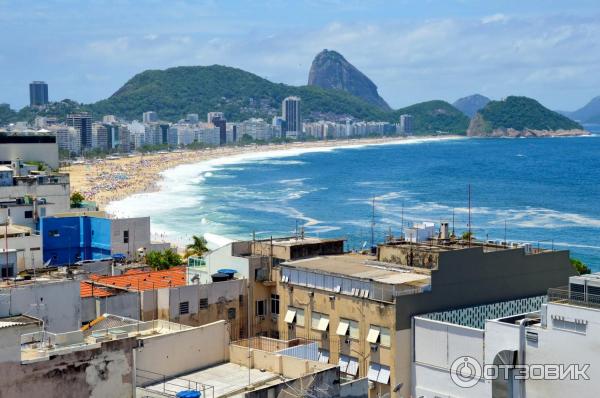 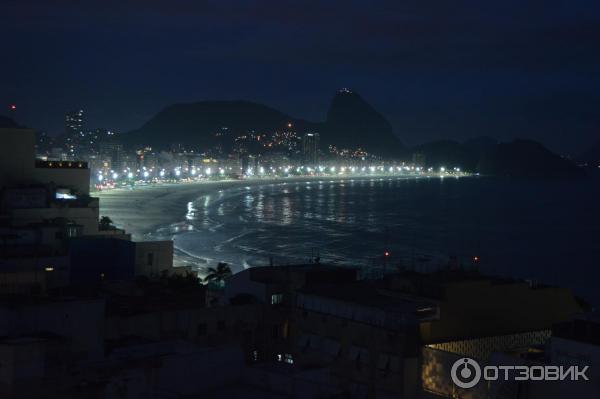 I should also note that at the end of Copacabana Beach towards the more upscale Ipanema area (and the beach of the same name) on a small peninsula there is an interesting sight – Fort Copacabana, which was built in the early 20th century to protect the bay of Rio. This fort can be visited, the visit is paid, which in the realities of Rio de Janeiro is a plus, because the paid entrance means that there are no criminal personalities from the favelas and you can safely walk around the area without looking around. The fort also offers a nice view of the beach (you can also see the favelas on the hill behind the Copacabana neighborhood): 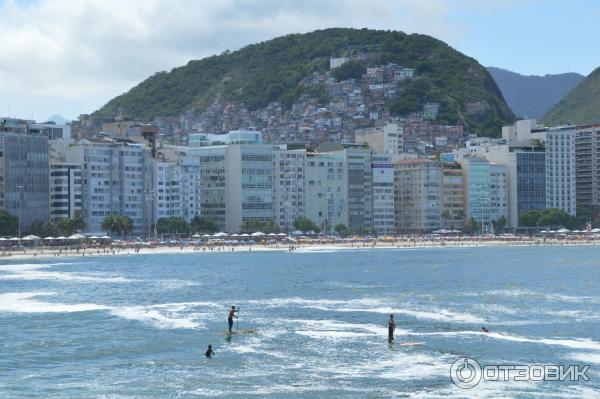 Copacabana Beach is one of the iconic places and main attractions of Rio de Janeiro, which is why almost all tourists visiting this magnificent city come here sooner or later. Visiting the beach is undoubtedly worth it, but you should not lose vigilance and “shine” expensive things or jewelry.