It would be a mistake for a tourist visiting Rome not to admire the beauty and original execution of the architecture of the Coppede neighborhood.

The liberty, art nouveau or art nouveau style is an indicator of the 20th century architectural genius Gino Coppede used to create the Coppede neighborhood. A combination of almost all architectural styles from Gothic to Baroque, decorated with décor inspired by the mythology of Greece, the Roman Empire and the Middle Ages, characterize the forty-five magnificent buildings.

The Coppedè quarter is located in the north-east area of Rome, surrounded by Avenue Trieste, Piazza Buenos Aires and via Tagliamento.

The idea to build a residential complex for the middle class near Buenos Aires was conceived in 1915 by Alonzo Arnaldo, an administrator for the organization of modern construction. The idea was financed by the Cerruti Company. The design was entrusted to Gino Coppeda. Subsequently, the area of the Italian capital was beloved by representatives of respectable and wealthy families. At the moment, it is a concentration of embassies, offices, and sales representatives.

According to Gino Coppedè’s biography, he came to Rome in 1913, already famous for his work in Florence, Genoa and Messina. He worked on the quarter for ten years from 1916 to 1926. But it did not live up to complete one year. In 1927, construction was completed under the supervision of the architect Paolo Emilio Andre.

On the map of Rome, the original quarter named after its creator Coppede is located in the northeast of the capital. On Tagliamento there is a Moorish-style arch that connects the palaces standing next to each other and is the main entrance. Tourists are greeted by a statue of Saint Mary with a baby. The arch is decorated with asymmetrical decor and a huge iron suspension composition.

An interesting fact. In Via Clitunno 4, the Trade Representation of Russia in Italy. Over the building, the roof of which is supported by figures of animals, and the walls are decorated with numerous paintings on the themes of Greek mythology, flies the Russian flag.

Worthy of attention of the tourist are fairy and mythical symbols, sculptural and garden ensembles, coats of arms and images of bees, snails, lizards in unexpected angles.

READ
Aparthotel what is it

The tourist understands that it is not difficult to reach by finding the quarter of Coppede on the map.

Tickets are purchased at metro stations, in kiosks (tobacco, newspapers), through special vending machines. In transport the ticket is composted.

The Agency Sputnik offers services for 62 EUR per person starting at Viale Regina Margherita 81. The duration is the same.

The service “Tripster.ru” provides assistance for organizing an independent travel. Streetcar tour of Rome arranges the first stop “Quarter Coppede”. Accompanying an individual group of 1 to 5 people, including children, costs 84 EUR. The tour is conducted in Russian.

Not all sightseeing tours in Rome include a visit to the original metropolitan area. Recommend a free walk through Coppeda. For a visit to this quarter with unusual architecture, the tourist should allocate a few hours.

You can finish the tour on foot by enjoying the dishes of the restaurant Larys (via Basento 54).

Coppedè quarter – a fairytale town in the center of Rome

Away from the bustling historic center of Rome is a quiet and unlike anything else in the Eternal City, known to few tourists. The Coppede neighborhood is a slice of an unusual and unexplored Rome. Built with amazing buildings from the beginning of XX century, it appears to be a real fairytale city. In the fantasy world of Florentine architect Gino Coppede there are 18 small villas and 27 residential buildings decorated with ancient Greek mythological motifs, Roman triumphal arches, medieval turrets and natural elements typical of the Liberty style.

READ
The Tower of Pisa, why it falls and where it is located 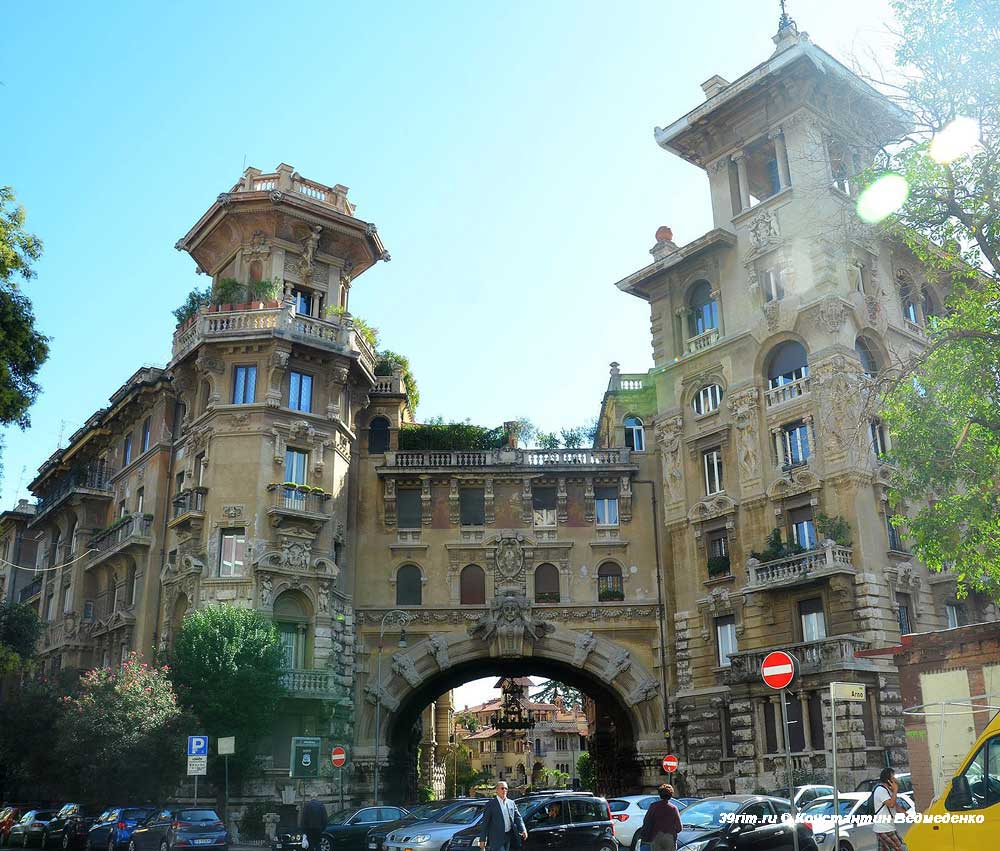 The history of the Coppede quarter goes back to 1909. At that time, the mayor of Rome, Ernesto Nathan, approved and approved the project plan for a new residential area designed by the urban engineer Edmondo di Teulada. The project was entrusted to Gino Coppede (1866-1927), architect and sculptor from Florence, who had recently arrived in Rome and who was already well known not only in his native city but also in Genoa and Messina.

The Coppedè quarter, whose construction began on October 19, 1916, became the main attraction of the residential areas of Solario and Trieste, which appeared later. Its buildings were intended for the Roman bourgeoisie, bankers and foreign ambassadors. The architect himself did not see the final realization of his plans, having died in 1927. The neighborhood was completed by Paolo Emilio Andre (1877-1939), a Florentine architect who was the son-in-law of Gino Coppede.

Welcome to the Fairytale City

The “front” entrance to the Coppede quarter is on the side of via Tagliamento. It is made in the form of a monumental arch connecting two buildings, which were called the Ambassador Palaces. It is decorated with numerous architectural elements and a unique wrought iron chandelier. Under the arch runs via Dora, the street that leads to the central square of the fairy-tale quarter, Piazza Mincio, which is the heart of the entire district. 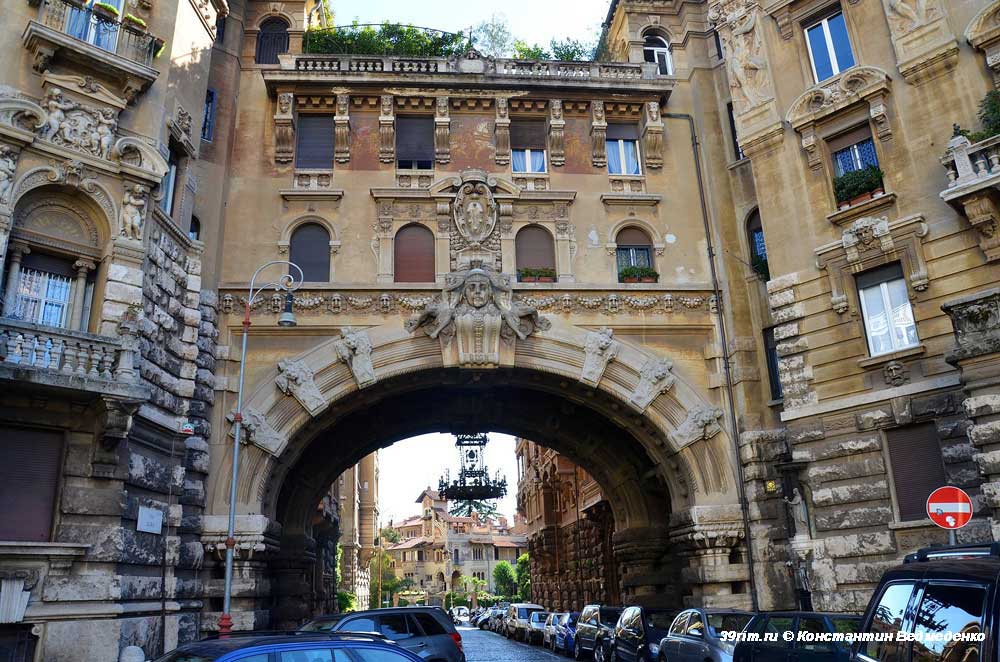 The arch of the main entrance over via Dora © Konstantin Vedmeddenko

In the middle of the square there is the Fountain of Frogs (Fontana della Rane) built according to Gino Coppedè himself in neo-Baroque style in 1924. As the architect said “the fountain is water, that means life; it is nature that merges with the human soul in a harmonious and noisy game of splashing water”. 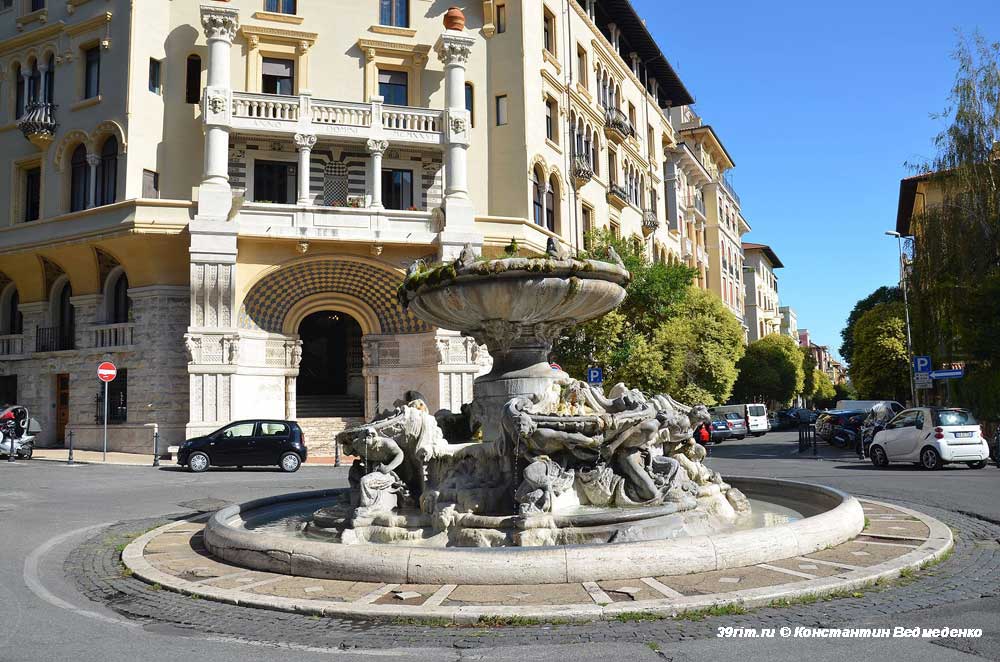 Piazza Mincho and the Fountain of Frogs © Konstantin Vedmedenko

The obvious resemblance of the fountain to the famous Fountain of Turtles, located in Piazza Mattei in the Jewish Ghetto, is striking. But, nevertheless, it has its undoubted differences. The Fountain of the Frogs is Baroque in style, and the presence of shells and a large bee on the edge of the tub is a tribute to the works of the great Lorenzo Bernini.

From the piazza, considered the epicenter of the residential quarter, several streets diverge – via Dora, via Tornaro and via Aterno – along which there are fairy-tale houses with fascinating names.

The Fairy House in Coppedès

It is a complex of three buildings erected in 1924 – 26 and united under the name of Villini della Fate. The facades look onto the different streets of the quarter and are the most striking example of the libertine style, as Art Nouveau or Art Nouveau in Italy, realized by Gino Coppedè. Fey House from the Piazza Mincho side

For example, the façade from the central piazza Mincho looks like a Florentine house from the time of Petrarch and Dante, as the inscription “Fiorenza Bella” even testifies, while from via Brenta the image of the winged lion already reminds of the cathedral of San Marco in Venice. The balcony with the decoration of the she-wolf and the brothers Romulus and Remus symbolizes belonging to Rome. Palazzo del Ragno – this building got its name because of the stained-glass window depicting a huge spider stretching a golden web over the main entrance of the four-story palace, which is a symbol of the superiority of labor. Its facade is decorated with griffins soaring in the sky and medieval knights on galloping horses.

READ
Alcatraz prison, where it is and the mysterious escape The Coppedè quarter and its environs never fail to amaze an inexperienced researcher of the Eternal City who happens to stroll here – there’s hardly anything like it in Rome. 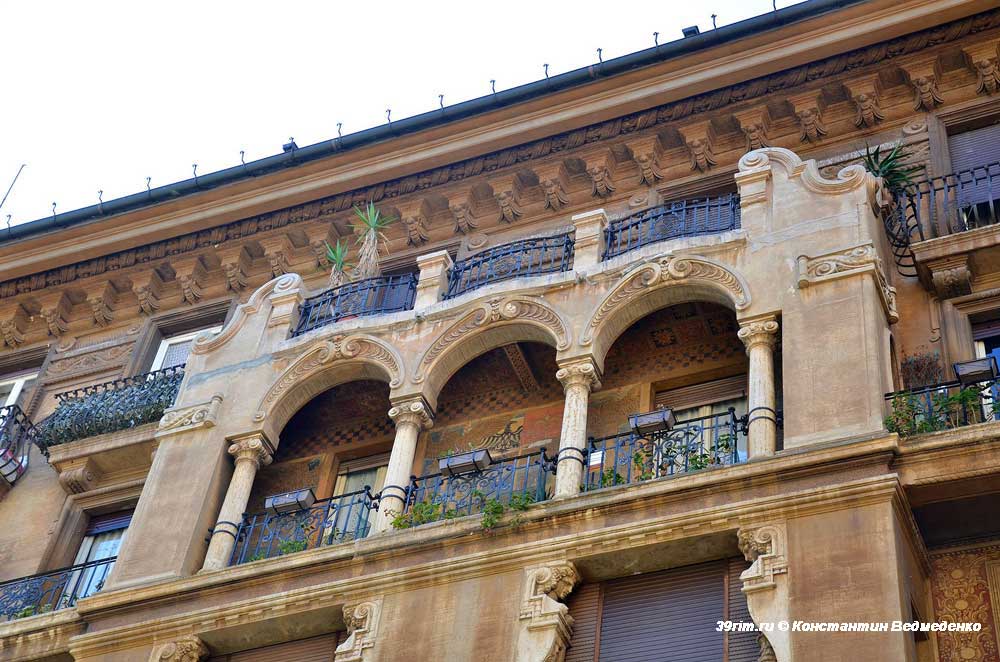 It is believed that the fantastic atmosphere of this neighborhood is created by the many esoteric symbols of Freemasonry placed on its buildings in the form of stucco decorations, bas-reliefs and sculptures. After all, Freemasons are also called “Sons of Light,” implying by this their mission to carry the very light of knowledge that is the key to accessing hidden truths. One proof of this is the metal chandelier under the arch of the main entrance of the quarter in via Doria – because it illuminates the beginning of the path to a new, wonderful and unexplored world. Today, most of the fabulous buildings are occupied by the diplomatic missions of many countries. The neighborhood lives its own unhurried, measured life, unlike the bustling streets of Metro Centrale. Take your mind off the hustle and bustle and experience a different Rome with a walk to this fascinating corner of the Eternal City.