Crater Lake is the deepest lake in the U.S.

Incredibly beautiful lake in the caldera of an extinct volcano is located in the northwestern United States, in Oregon. This Crater Lake is one of the most amazing and stunning lakes on the planet. It is one of the ten bluest (yes, don’t be surprised, blue) and deepest lakes on Earth.

Crater Lake on a map

The amazing lake, filled with clear water of equally amazing color, was created by the eruption of the Mazama Volcano. It happened about 7,700 years ago.

According to scientific research Kreuter Lake was formed like this: the top of the volcano during the eruption collapsed, forming a caldera, a depth of about 1220 meters. Landslides from the edges of the caldera created the bottom of the future body of water. But the lake did not appear there immediately, but over a long period of time, drop by drop collecting precipitation. Gradually, the reservoir formed, and the edges of the caldera were covered with forests, creating an unparalleled natural landscape.

Crater Lake is an almost circular body of water in the crater of the volcano. It is located at an altitude of about 2 km above the sea and has a pretty decent size.

Depth measurements were first made in 1886 by the American Geological Survey. Then, by measuring the depth in many places, it was found that the maximum is 608 meters. But whether the water level of the lake has dropped, or the measurement technique was imperfect, in 2000, with the help of modern means of echolocation, the maximum recorded depth was 594 meters. 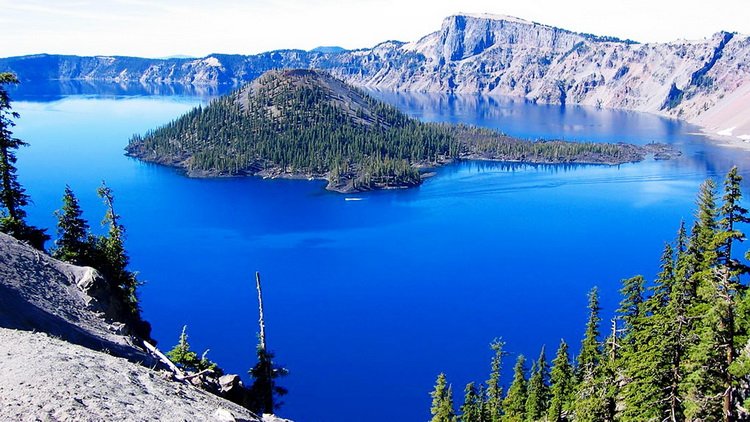 The Klamath Indians most likely witnessed the eruption of the Mazama Volcano, as legends still remain that in ancient times there was a grand battle between Skell, God of Heaven, and Liao, God of the Underground Kingdom. The Indians call this battle the “Last Great Battle.” The winner of the battle was Skell, God of Heaven.

As the Indians would have it, they endowed Crater Lake with mythical and magical properties. Indians visited it in search of visions and in attempts to predict the future. And those who managed to guess the future or really “see it” were considered to possess the sacred power of spirits.

Who Discovered Crater Lake to the World

The first European settler to see the lake was John Wesley Hilman. It happened in June 1853. It must be said that the body of water made an indelible impression on him, and John called it Deep Blue Lake (in the original Deep Blue Lake). For some unknown reason, that name didn’t stick. The lake changed three names. After Deep Blue, it was called Lake Majesty or Lake Majestic. Note that in those days, apparently, there was a shortage of imagination, and the body of water received a third name, Crater Lake. And since in the original it looks like Crater Lake, we can safely conclude that the formal translation sounds like Crater Lake or Crater Lake. Therefore, one can also encounter the name Crater Lake.

Well, no imagination at all. In our (very subjective) opinion, this lake could have been given a more attractive name, such as “Liao Mountain Tomb” or “Big Lake in the Clouds”. Couldn’t the Indians, masters of interesting names, come up with some epic name? They could at least borrow ideas from the Chinese. After all, the sights of the world can have much more poetic names. Think of the names typical of Chinese landmarks. Cane Flute Cave, Leaping Tiger Gorge – not a name, but a song. 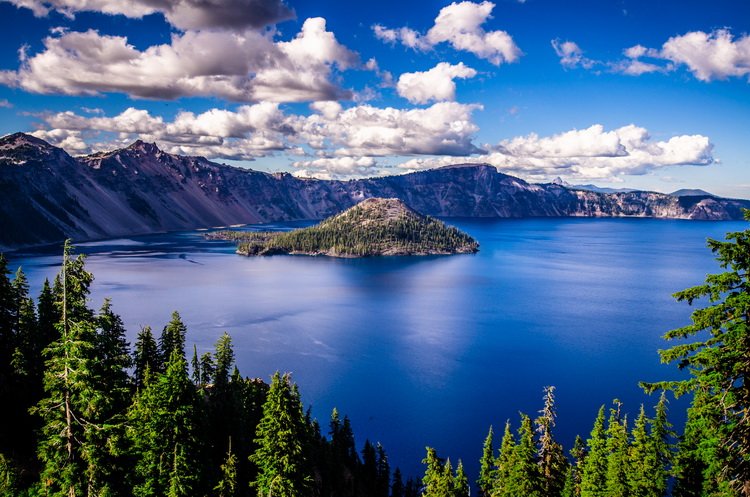 Lake Crater is the main attraction of the eponymous National Park (the park itself was founded to preserve this beautiful body of water). Naturally, this unique body of water attracts many tourists. There is a charge for admission to the park, but the price is reasonable and doesn’t break your budget.

Islands on the lake

There are a couple of volcanic islands on the lake. The large island is called Wizard Island, which literally translates to “Wizard Island. It, like the lake shore, is covered with forest. And a very small one, called Phantom Ship. Only a few trees grow on this island. 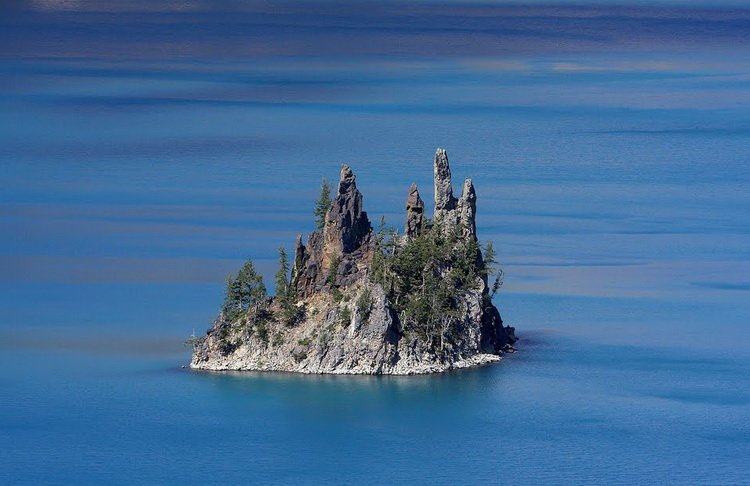 It is about 9 meters long, of which a little over a meter is visible above the water. The thickness of the log is about 60 cm. Since the water in the lake is quite cool, the log is almost not subject to destruction. The upper part of it has whitened long ago. Perhaps that is why it got its old man’s name. 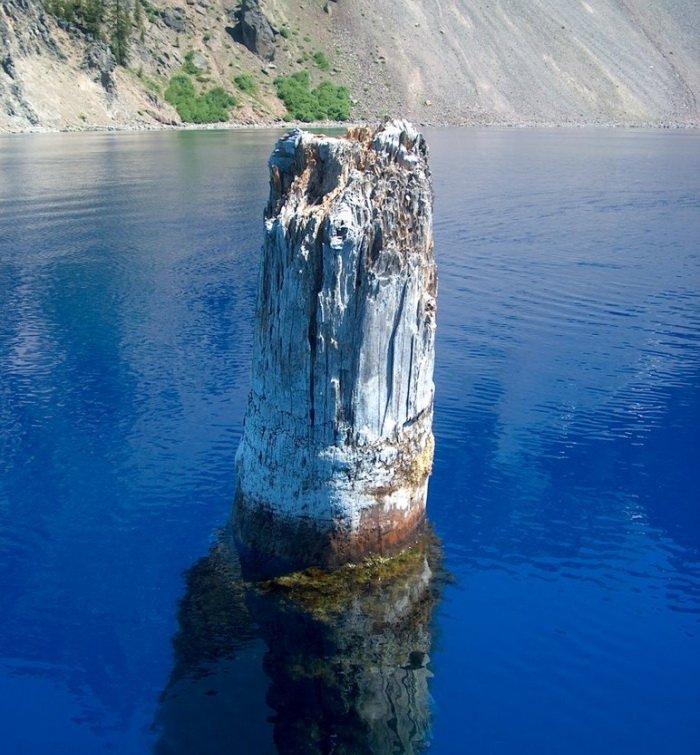 Originally, there were no fish in the lake. Only from 1888 to 1941 young rainbow trout and sockeye trout were released here. The fish adapted very quickly and began to breed, and now the fish population is quite large. 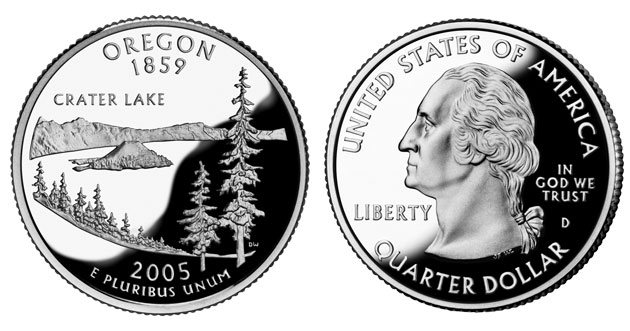 In the Crater Lake National Park (Oregon, USA), 128 km far from the city of Ashland, is located one of the most amazing sights of our world – Crater Lake formed in the crater of extinct volcano Mount Mazama, which last eruption was about 7700 years ago.

Crater Lake attracts tourists from around the world because of its clear, clear water with a bright blue hue, but sometimes the color becomes ominously dark. It is located quite high, the edge of the caldera is at an altitude of 2130 – 2440 meters, and its maximum depth is as much as 594 m! That makes it the second deepest in North America (the deepest is Big Slave Lake) and the eighth deepest in the world (Baikal is the deepest). The width of the lake is 8 by 9.6 km.

Mazama volcano, part of the volcanic arc of Cascade Mountains, consists mainly of andesite, dacite and rhyodacite. The caldera was formed as a result of a powerful volcanic eruption, which led to the sinking of Mazama at about 5700 BC: about 50 km³ of rhyodacite was erupted in the process. Later lava eruptions created the platform at the center of the caldera, Wizard Island, Merriam Cone, and other smaller volcanic sites, including the riodacite dome at the center of the platform.

The lake’s name has been changed three times. John Wesley Hillman, the first European American who traveled in Oregon on June 12, 1853, saw the lake, was struck by the unusual color of the lake, its beauty and location, and called it – “Deep Blue Lake” (Deep Blue). Later the name was changed to Blue Lake, Lake Majesty, and the last name that has stuck with it to this day is Crater Lake.

The lake and the scenery in this area are simply striking for its beauty, which attracts tourists to visit it. Here you can see such a landmark of the lake as a small volcanic island rising out of the water – the Wizard Island, as well as the so-called “Lake Old Man” – a vertically floating log, which has been floating in the lake water for over a century. Thanks to the cold water it is quite well preserved, only whitened by weather effects, probably because of his age and the so-called “gray hair” and gave him such a name. The log is about 9 meters long, of which 120 cm towers over the water, and the diameter is about 60 cm.

In 1902 Theodore Roosevelt declared the lake area a National Park, largely due to the efforts of William Steele, who devoted seventeen years of his life to convincing Congress of the need to preserve and protect the lake. Also thanks to Steele, there is an amazing 53-kilometer Rim Drive that wraps around the lake and allows visitors to enjoy its scenic views from many different vantage points during the summer months. The Rim Drive is open from May or June (depending on when the snow melts) through October, during which time it’s best to visit Crater Lake. There is a fee to enter the park, but it is not much.

In 2005, the U.S. Mint issued a commemorative 25-cent Oregon State Coin with a depiction of Crater Lake on the reverse.