The island of Crete, bathed by three seas, can be reached by water or air only in two ways. If the theater begins with a hanger, the vacation in Crete begins most often at the airport. The three airports of Crete welcome the visitors, coming from mainland Greece and from all over the world. Due to the fact that they are located in different parts of Crete, getting to any resort is easy, especially during summer, during high season.

The Heraklion Airport (international code HER) is the largest airport of Crete and serves both international and domestic flights. With two terminals, one for passengers and one for cargo, as well as two runways, it serves approximately 8 million passengers every year.

The airport, named after Nikos Kazantzakis, the famous Greek writer, was built before the Second World War, in 1939 and during the war it served only the Italian and German air forces, but in 1946 it also started to serve the passengers.

Despite the fact that during its existence, the airport has been reconstructed and rebuilt several times, it is still difficult to cope with the annually growing traffic of passengers, especially during the summer season, when regular flights are added to the charter flights.

The airport is located 6 kilometers from the center of Heraklion, which is easily accessible by bus or cab, which can be ordered online. The same ways will have to be used by those who, bypassing the capital of Crete, go to Hersonissos, Agia Pelagia, Malia, Gouves and other resorts.

If you are planning to rent a car for a trip to Crete, the Heraklion Airport is the best place for it. As a rule, car rental companies located here have the cheapest prices compared to their other offices in other cities of Crete.

READ
Ashram in India, how to enter and life in an ashram

You can compare the prices of rental cars in Heraklion airport with the main car rental companies and book a car for your vacation on this page. You should be aware that during the peak season car rental prices are rising sharply across Greece, so do not hesitate to make a decision, it will cost you more.

You can find detailed information about transportation to and from Heraklion Airport here.

Chania Airport (international code CHQ) is the second most important airport of Crete and serves both international and domestic flights. The airport is named after Ioannis Daskalogiannis, the organizer of the Cretan revolt against the Ottomans in the 18th century.

The construction of the airport in 1954 facilitated the communication of Crete with the mainland and helped the development of tourism in the west. Today, its annual passenger traffic is 1.5 million passengers.

During its more than half-century of history, the airport has changed several locations. Initially it was located in the military airfield in the village of Maleme, four years later the airport was moved to another place and the passenger terminal was added to it only in 1967.

Chania airport is quite compact with all the necessary services as well as cafes, restaurants, post office, bank office, health center and stores all in one building. 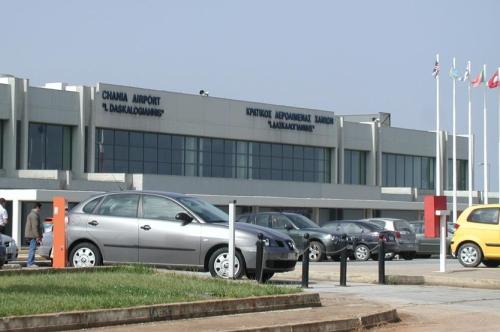 Chania airport is the second most important airport of the island

In Chania arrive tourists who are planning to spend their vacations in the resorts of western Crete – Georgioupolis, Platanias, Agia Maria etc. The airport is connected with the city center as well as with the other cities of Crete by a regular bus service.

The bus stop is located right outside the terminal and it takes 20-30 minutes to get from the airport to the center of Crete. Intercity buses leave from the city bus station.

More information about the airport can be found in Grekoblog article Chania Airport and how to get to the hotel. 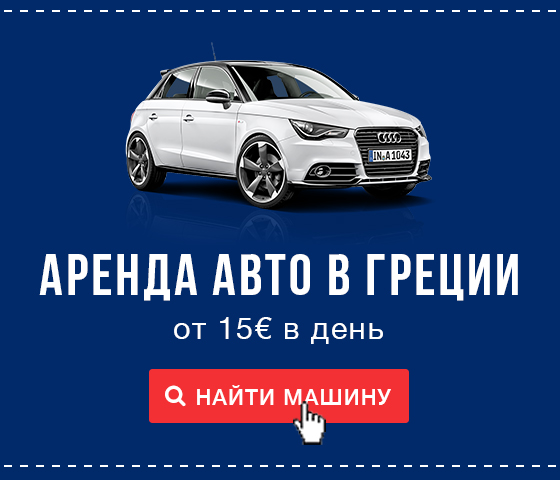 The third most important airport of Crete is located in the eastern part of the island in Sitia. It (international code JSH) was opened in 1984 to serve domestic flights from Athens, Thessaloniki, Preveza, Alexandropoulis as well as from Rhodes, Kasos and Karpathos.

In 1993 a new, more modern terminal was built and ten years later a new runway of 2,100 meters was built.

The building of this airport is small, but quite comfortable: it has everything you need – an information desk, ATMs, rest rooms, cafes. Today Sitia Airport receives not only domestic but also some charter flights from Europe, including Russia. 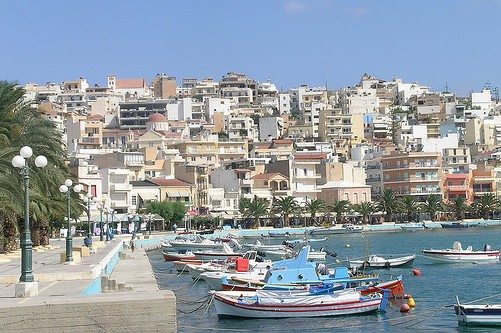 Sitia Airport is located just 1 kilometer from the city center

Sitia Airport is 1 km from the center of Sitia and can be reached by bus or cab and is a great choice for travelers who want to explore the eastern part of Crete, a less popular tourist destination, but no less interesting.

Sitia and its surroundings have historic sites – the old Venetian fortress Casarma, the monastery of Tolpou, the Minoan palace of Zakros.

Two hours drive from Sitia is Agios Nikolaos, one of the most comfortable resorts of Crete, famous for its superb beaches, historic sites and natural beauty.

30 km from Sitia, there is the famous Vai, a beautiful sandy beach with a palm grove on its shores.

Are there airports in Crete and how many, what are they called and where are they located? Which airport is closest to the center and which one is the best? All airports of Crete and nearby cities on the map and distance to them, choose the best one according to real tourists reviews.

Airports in nearby cities

You can get to Crete through one of its three airports. But the most popular of them is only one – Heraklion airport. Charter flights from Russia most often fly here during the tourist season.

The biggest airport of Nikos Kazantzakis

The closest airport to the popular resorts in the Heraklio area. I flew here with EllinAir airline. It is a Greek company with direct flights from Moscow. The transfer from the airport to the hotel was included in the price of the package tour.

But if you still need to use public transportation, there are buses to the city from the terminals. The distance is only 6 kilometers and the travel time is no more than 20 minutes. 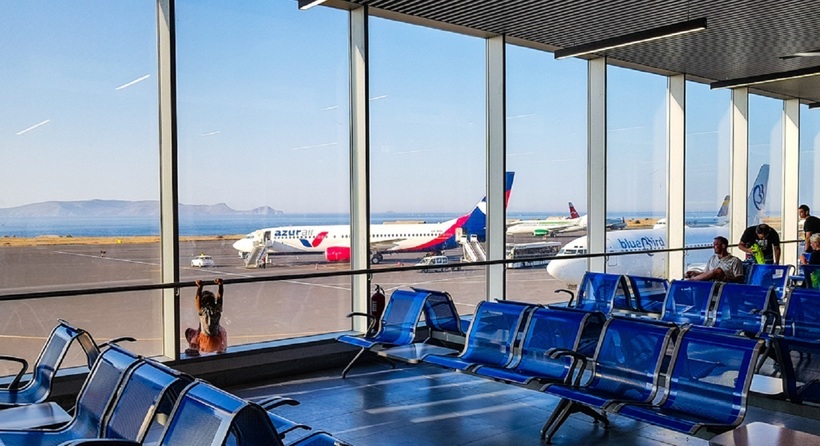 Ioannis Daskaloyannis – the base airport of Aegean Airlines and Ryanair

The second most important airport is located 15 km from Chania.

It is recommended to all tourists who have a holiday in Chania or Rethymnon. Unfortunately, Russian charters rarely fly here. But you can fly here from any other island or resort on the mainland by planes of the Greek airline Aegean Airlines or budget airline Ryanair.

From the airport building there are buses to the city. Fortunately, there are nearby stops. 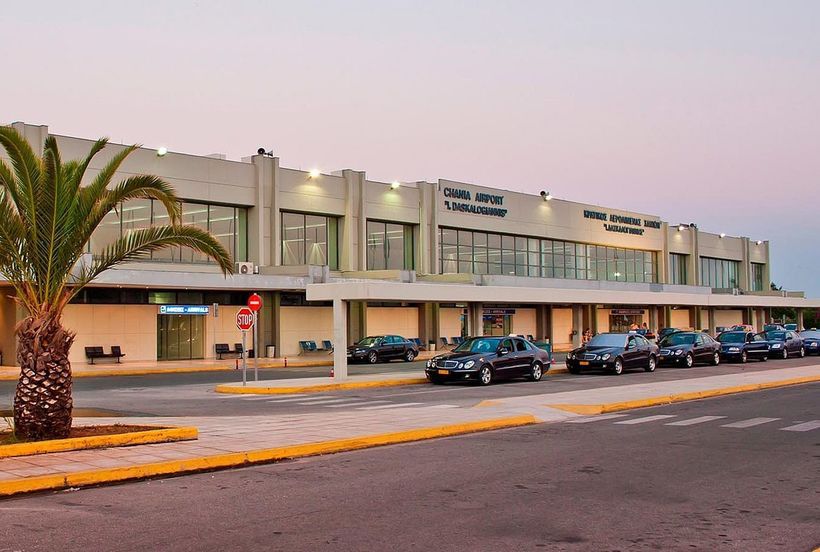 The promising airport of the island – Sitia

It has a very convenient location: just a couple of kilometers from the center of Sitia. This is the best airport for tourists vacationing in the resorts of Lassithi region. A few years ago through this airport flew only domestic flights in Greece. But recently began to accept some planes coming from other countries. Perhaps one day charter flights from Russia will fly here, so you will not have to travel long distances from Heraklion airport to Lassithi resorts.

The airport of Heraklion, the “capital” of Crete: a nice meeting

How I did not want to spend my spring break in Crete. I wanted to go to Amsterdam, Paris or Berlin, but then my parents dragged me to Greece. And, oh, how wrong I was, the country and the island of Crete itself opened for me in a new light, everything was great.

My acquaintance with the island began with the arrival at the airport of the “capital” of Crete – Heraklion, which was named after the Greek writer Nikos Kazanzakis.

Buses bring passengers to the entrance of the terminal. At first I was worried that I would have to wait, because a lot of passengers had got off the plane, but everything was fast: buses were brought quickly, a few minutes and I was already standing in the passport control area. It was there that the stereotype of the mobility of the Greeks was confirmed – they are really slow, but they are polite and have a nice smile, especially when you greet them in Greek. I got my luggage quickly while I went through all the necessary procedures and it was quietly rotating on the conveyor in the checkout area.

Well, then the passengers have a few options on how to get to the city:

The airport itself seemed spacious to me. There are a couple of boards with the schedule of all flights. There are enough check-in counters. 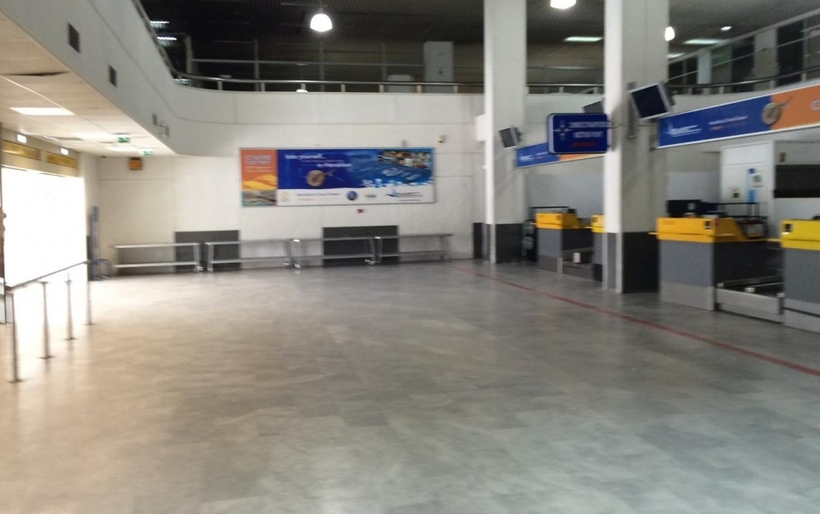 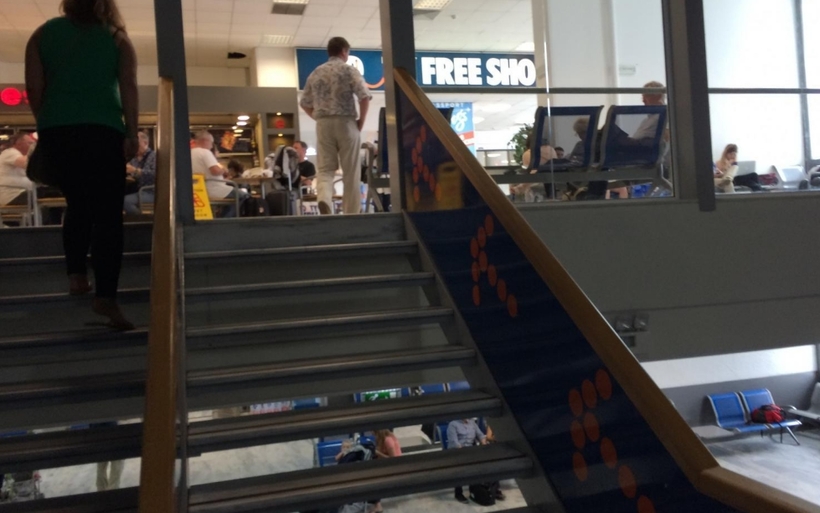 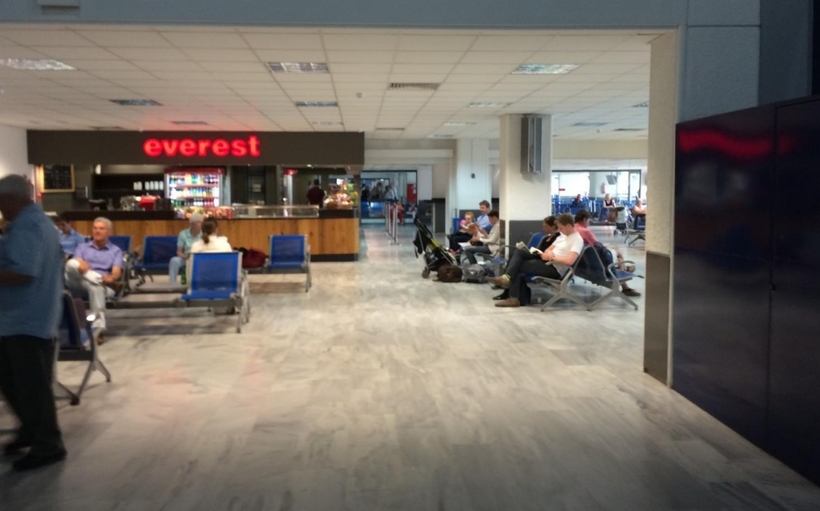 How does the largest airport of Crete look like?

Let me begin by saying that there are three airports in the Greek island of Crete:

All of them are located in the northern part of Crete, at a distance of 55 km from each other. Nikos Kazantzakis and Souda are international, the latter only smaller, while Sitia, as far as I know, serves domestic flights.

In any case, I arrived at Nikos Kazantzakis airport and was left with a negative impression. From the outside the building looks like this: 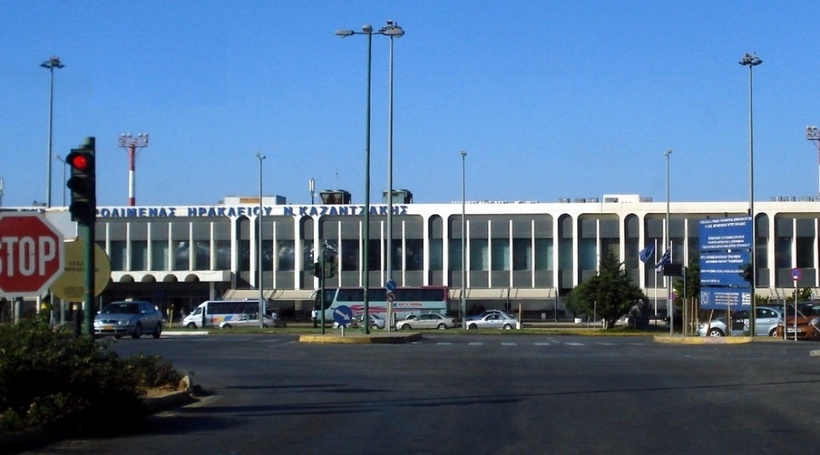 The airport, receiving just a huge number of flights from Europe and Asia, just can not withstand such a flow of tourists, so everywhere, absolutely everywhere there are kilometer-long lines: 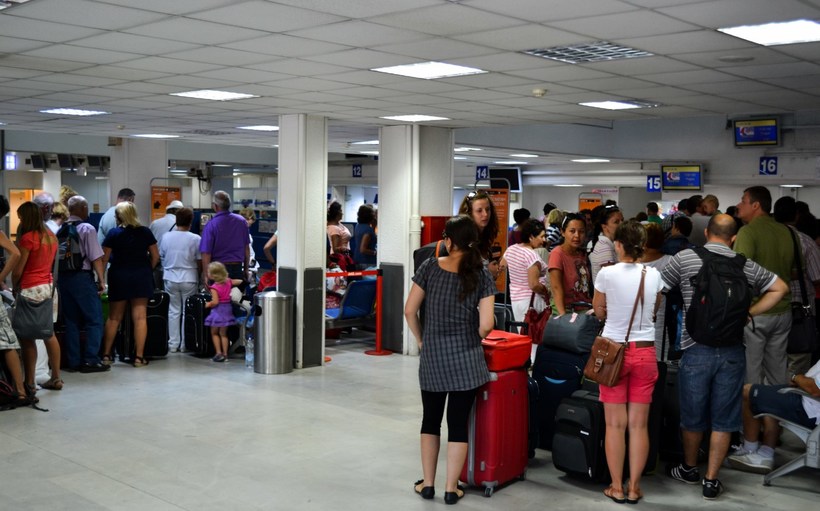 There are not enough seats in the halls either, so those who are waiting for their departure or meeting guests simply sit on the floor.

There is also nowhere to eat here. Well, except at the only cafe “Everest”, where you have to stand for what? That’s right, the queue! In addition, more or less cheap dishes are always unavailable here. From fast food: two hot dogs and one small Nestea with lemon cost 13 Euro!

The airport is very hot. Free water fountains? Nope, haven’t heard! Not even a place to buy cold water.

Lockers are awfully expensive here. Even in advanced European airports they cost 4 euros, but in this backwater – as much as 12!

What can I say? The airport needs modernization. There is a lack of check-in counters (actually there are 25, but only half of them work), ATMs, exchange offices, signs. I hope, the Greek government will solve this issue soon.