The Vladimir Crystal Museum in the Church of the Holy Trinity

The Museum of Crystal in Vladimir is a department of the Vladimir-Suzdal Museum-Reserve, dedicated to the folk crafts of the former Vladimir Province.

The museum of crystal is one of the best on a combination of price and quality of museums in Vladimir. For quite small money you can get acquainted with artistic crafts of provincial towns of the Vladimir region not going out of the Vladimir historical center.

The exhibition “Crystal. Lacquer Miniatures. Embroidery” was organized in 1974 as a part of the Vladimir and Suzdal Museum Reserve which united the main historical, architectural landmarks and crafts of the former Vladimir Province. Nowadays, the Museum of Crystal has become one of dozens of objects of the United Museum-Reserve and the main focus of its activities has been chosen the arts and crafts which were developed in the territory of Vladimir land.

The building of the Old Believers’ Church of the Holy Trinity, erected in the early 20th century in the Pseudo-Russian style for the anniversary of the Romanov dynasty, was chosen to house the exhibition. Until 1928 in the church were still conducted services, after that it was closed, and its premises have consistently located warehouses and women’s dormitory. In the 60s local authorities intended to demolish the church, but the public managed to defend it. After the building had been restored, it was decided to transfer it to the balance of the Vladimir and Suzdal Museum Reserve, which in 1974 housed an exhibition of arts and crafts of the Vladimir region.

The museum consists of several expositions. On the first floor there is an exhibition of crystal and glass. The decoration of the hall has been suggested by the Moscow artist L. Ozernikov, according to his idea the exhibition presents the crystal river from the birth of the crystal trade on the territory of the Vladimir region to the present day. Therefore, the dominant colors of the exhibits are blue and gray-blue. The works of contemporary artists-glassblowers are placed in the center of the exhibition in the form of a polyhedral pyramid, the works of masters of the past are placed on the sides. The majority of the exposition items are made in Gus-Khrustalny, and among others there are works made by the masters of Maltsov’s factory as far back as the 18th century.

The second part of the exposition is an exhibition of Mstyorsk lacquer miniatures, located on the second floor. Despite the young age of the folk craft, which appeared after the revolution, the roots of Mstyorsk miniatures go back to antiquity. Iconographic craft originated in Mstyora at the end of the XVII century, the first members of the artels of Mstyora painters were former icon painters, who kept the tradition of folk art for more than 250 years.

Also in the room of church choirs on the second floor there is an exhibition of Mstyora lace, originating from the XVII century. The distinctive feature of Mstyorskiy embroidery is the absence of a front side and back side, so both sides it looks equally beautiful . Mstyorsk embroidery is characterized by plant patterns and two main directions:

In the basement of the church is another room of the museum – an exposition, stylized as a store of crystal utensils of the late XIX century. Nechaev-Maltsev’s trademark stores were once present in both capitals. This hall also serves as a souvenir shop, where you can buy original crystal and glassware produced by the factory in the town of Gus-Khrustalny.

The cost of the visit: 150 RUR for an adult ticket, 75 RUR for pensioners, students and pupils from 16 years old. The entrance for children under 16 years old is free.

How to get to the museum

The museum is located in the center of Vladimir next to one of the main places of interest of the city – the Golden Gate. The public transport stop “Golden gate” is quite near the museum. Due to the peculiarities of the city development, more than half of public transport routes pass through this place. You can get to the museum

The Museum of crystal is located at: Vladimir, Dvoryanskaya St., 2. Working hours of the museum: 11:00 – 19:00 (Monday, Wednesday – Sunday). On Tuesdays the museum is closed.

Museum of Crystal in Vladimir 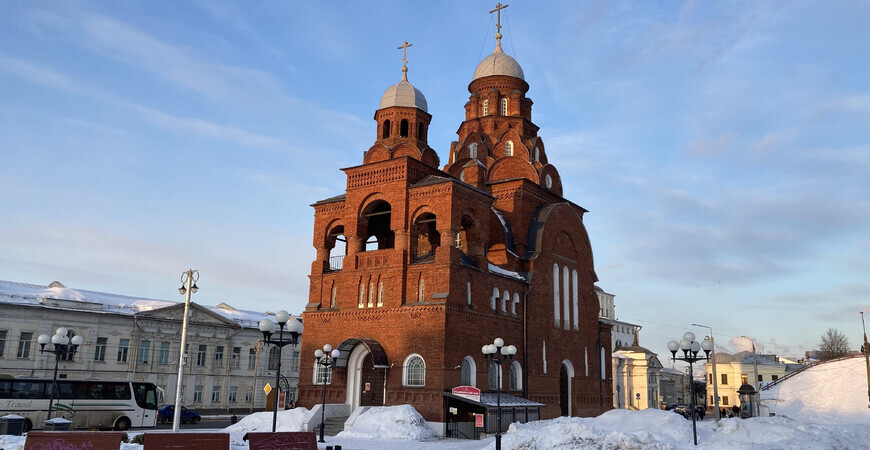 Museum of crystal in Vladimir will acquaint its visitors not only with the history of glass production, but also the country. The fragile exhibits will tell you about the unpretentious Russian fun, reveal the meaning of the phrase “souvenirs of feelings” and show you what some exhibits and the Kremlin stars have in common.

To learn all this, go to Trinity Church, which houses the exhibition. This former Old Believer structure is also known as “The Red Church” because of the characteristic color of the brickwork.

Before it became a museum, this architectural monument of regional importance and the last religious building, built in Vladimir before the Revolution, was a church, an archive bureau, a warehouse and a women’s dormitory.

The shrine of the Old Believers was about to be given to a theatrical box office, and in the 1960s it was even going to be blown up. The plan was thwarted by the local intelligentsia.

In May 1974, the first museum of Gusev glass and crystal was opened there. The current exposition is the fourth version of the institution.

The last change occurred not so long ago – in the summer of 2020. Then the renovated Trinity Church, which had not been renovated for a long time, opened its doors to visitors.

Adjustments were also made to the exhibition: the collections of lacquer miniatures and embroidery disappeared from the choirs of the temple. This is reflected in the title, which used to be: “Crystal. Lacquer miniatures. Embroidery.

Exhibition of the Crystal Museum in Vladimir

Glass masterpieces are displayed in the showcases on the first floor of the Trinity Church. They occupy two spacious halls with beautiful stained glass windows. The first one is dedicated to the formation of glassmaking in Gus-Khrustalny, the second – to modern products of the Gusev crystal plant.

What to see in the first hall

The information boards in the small room are full of the Maltsovs’ surname. And it is not by chance. Because the representative of this dynasty Akim Vasilyevich founded the Gusev crystal factory in 1756. His son, Ivan Akimovich Maltsov, inherited the factory 42 years later.

The earliest example of their production is a corkscrew, painted with biblical motifs. Nearby you can see a unique object – a walking stick, decorated with Venetian thread.

Not far away there are samples of the Imperial Glass Factory. Among them there are mugs and glasses painted in gold.

Also on display is a mock shot glass – a small glass with a lid for a late guest. A smart design did not allow to drink the contents and it spilled on the offender – such a Russian joke.

It was counterbalanced by elegant flute flutes in which champagne was served for the first time in Russia.

Now it is time to get to know the crystalware. The earliest ones date from the first half of the 19th century.

And here are the “souvenirs of feelings” – glassware given as gifts for holidays.

See the stand with the red-gold pieces? This is the “golden ruby,” which is cooked using gold. It’s not our invention, but the factory in Gus-Khrustalny was the first in Russia to try out this technology. Some time later the precious metal was replaced by copper and selenium.

Uranium glassware is no less bright looking. In everyday life, such glassware is not dangerous, but the same cannot be said about the raw material. This lack of knowledge cost many of the masters of the time their health.

A special place in the exposition is given to vases of the Art Nouveau and Art Deco era. Subjects are made in the technique of etching on multi-layered glass, developed by the Frenchman Emile Galle.

What to see in the second hall

A spacious room exhibits glass dating from 1918 to the present day.

People who lived in the Soviet Union will surely recognize the familiar design of the Eiffel Tower vase. It was also called “Bertz” – after the resemblance to the human tibia bone.

Most of the post-revolutionary works reflect the most important political events. Here, for example, the composition “Wheat”. Created for the first agricultural exhibition.

An eloquent witness of the postwar period is the vase “Victory Order” by Yevgeny Rogov. The vivid composition “Hot Snow” is dedicated to the same theme.

A striking highlight of the collection of the Museum of crystal in Vladimir – glass sculptures, made in the technique of sulphur. They include fabulous birds, dragons and horses. One of such figures made by Vladimir Muratov was given to Vladimir Putin during his visit to Trinity Church in 2002.

Other art-objects also have no utilitarian function: “Cheryomushka” and “Ryabinka” by Evgeny Rogov, “Defile” by Olga Kozlova, “Architecture” by Vyacheslav Zaitsev.

In the center of the hall there is a huge sculpture “Memories of Venice”. The colorful work by Vladimir Muratov reflects the essence of the entire museum and keeps the eyes of visitors for a long time. It was, however, created in 1972 for this very purpose.

Next to the main exhibition is the exit from the church. Take the small staircase downstairs and go through the souvenir store. Here you can buy crystal tableware, magnets, Pavloposadki shawls, Gzhel ceramics and much more.

Look for the former Old Believers’ Church at 2 Dvoryanskaya Street. The Drama Theater and the Golden Gate – the main symbol of the city – are very easy to get to. By public transport take buses, busses and trolleybuses.

By shuttle-bus: On Dvoryanskaya Street there are routes № 5, 36. Get off at the “Golden Gate” stop.

On foot: it doesn’t take long to walk from another famous place of Vladimir – Sobornaya Square. The distance of 800 meters can be covered in 10 minutes. Go along Bolshaya Moskovskaya Street in the direction of the Golden Gate.

By car: from more distant Frunzensky district of the city take Bolshaya Nizhegorodskaya street that turns into Bolshaya Moskovskaya street.

By cab: in the administrative center, count on the services of “Maxim”, “Veset”, “Yandex. Go”, Uber, DiDi.

Trinity Church and the Museum of Crystal in Vladimir on Yandex panorama: outside view

A video about the opening of the Museum of Crystal and Glass in Vladimir: