In the south of Argentina, in the province of Santa Cruz there is the amazing Cueva de las Manos , translated as “Cave of Hands” . The name describes it very accurately, because in this cave there are hundreds of images of palms left by ancient people. It is amazing that the people of antiquity, just like us as children, loved to trace their hands and make pictures of them.

The Cave of Hands is actually not one, it consists of several caves located in the Pinturas River Valley. Their total length is 160 kilometers, and there are plenty of places to get lost. But, of course, not all caves are allowed to tourists, only the safest and most interesting are open. Tourists can also enter the main cave. Its height is 10 meters and depth is 24 meters. At the same time, the cave is quite wide and has 15 meters in the widest place. Local tribes used to live here. And they lived in this cave for a long time, up to the 8th century, although they began to use the cave in the 10th century BC.

The drawings and their colors

It is in the main cave of Cueva de las Manos that the most pictures of human palms are found. Most of the images are negative, but there are some positive ones that appeared a little later. The colors of the palm prints in the cave can be red, yellow, white and black. The oldest prints date back to the 9th millennium BC, and the most recent are from the 10th century.

The drawings in the cave have survived thanks to the use of mineral paints. The bone straws found in the cave were used to draw them. These straws were used to determine the age of the paintings. To receive purple, paint with iron oxide was put into the tube, white clay was used for white color, black color was received due to manganese oxide, and yellow color was received due to natroyarosite. It is not clear, what principle was used to apply one or another color, but the handprints in the cave have different colors.

Who do the palms belong to?

After examining the prints, it was found out that they mostly belonged to teenage boys. And the left hand was used to make the prints. According to scientists, the left hand was chosen because it was more convenient to hold a straw and draw with the right hand, the one who could draw with the left hand, left the prints with the right hand. Such data suggested that making handprints was part of the initiation ritual. That is, when a teenager was preparing to become a man, he underwent rites which obligatorily included putting his palm prints on the cave in which the tribe lived.

The fact that the cave was not only a sacred place, but also the place of residence of the tribe is evidenced by the household objects found in the place and the drawings made on the caves. It has been determined that the Tehuelches lived here mainly and they created such an interesting tradition and have kept it alive for thousands of years.

Having visited Cueva de las Manos, there is an opportunity not only to see the palms of ancient people, but also their drawings, which depict aspects of tribal life. These are mostly hunting scenes. From these drawings it is not difficult to determine what the inhabitants of ancient Patagonia hunted. There are ostrich-nandu, guanaco, some feline species and other animals. In the caves you can also see the paw prints of these animals. There are also geometric figures inscribed by the inhabitants of the cave.

For Argentina, the Cave of Hands is an important landmark. In 1999, it was even included in the list of UNESCO. To get to the main cave travelers should take the dirt road PR 41 or the paved Ruta 40. The caves are located in the Francisco Moreno Park. It will be possible to arrange for a tour with an experienced guide, who will be able to explain the significance of each drawing clearly.

Location of the Cave of Hands:

Patagonia, near the town of Bajo Caracoles, on the banks of the Rio Pinturas River.

By car, take dirt road RP 41, which turns off Ruta 40 near the town of Bajo Caracoles. Then it goes 46 kilometers to the south bank of the Pinturas Canyon.

Rock carvings found nowhere else in the world: the Cave of Hands in Argentina 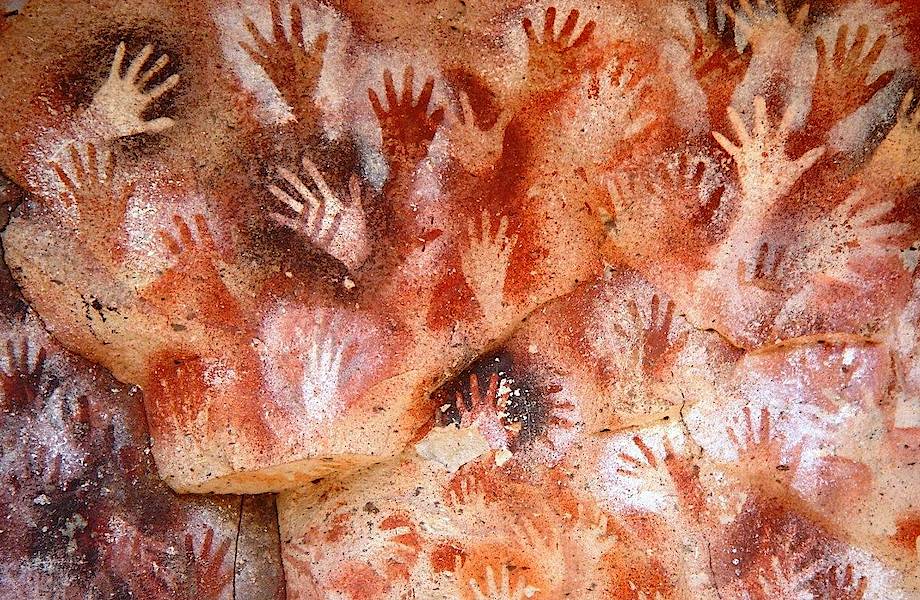 In the south of Argentina, in the valley of the Rio Pinturas River there is one of the most stunning caves in the world with unusual cave paintings. While the inhabitants of Eurasia and Africa preferred to paint wild animals, domestic scenes and hunting moments, the ancient inhabitants of South America left their descendants with their handprints. This is the Cave of Hands, or Cueva de las Manos, as it is officially called in the Argentine province of Santa Cruz. It is not a single cave, but a whole complex of grottos, halls and corridors, about 160 kilometers long. Not all of them are accessible to visitors, of course, but only the most interesting and relatively safe for unprepared travelers. The nearest town, from which mainly organize tours to the caves, is Bajo Caracoles.

The central motif in many of the wall paintings are human handprints. To be more precise, they are not prints, but a repetition of the outline, which was achieved by applying a dyeing substance over the hand applied to the wall. Archaeologists have found in the cave some tubes made of hollow bones, with which the primitive artists made their drawings. They used colored natural minerals to make paints. Interestingly, the vast majority of the drawings show the left hand, and researchers believe they are the hands of young men who left handprints during some kind of ritual. 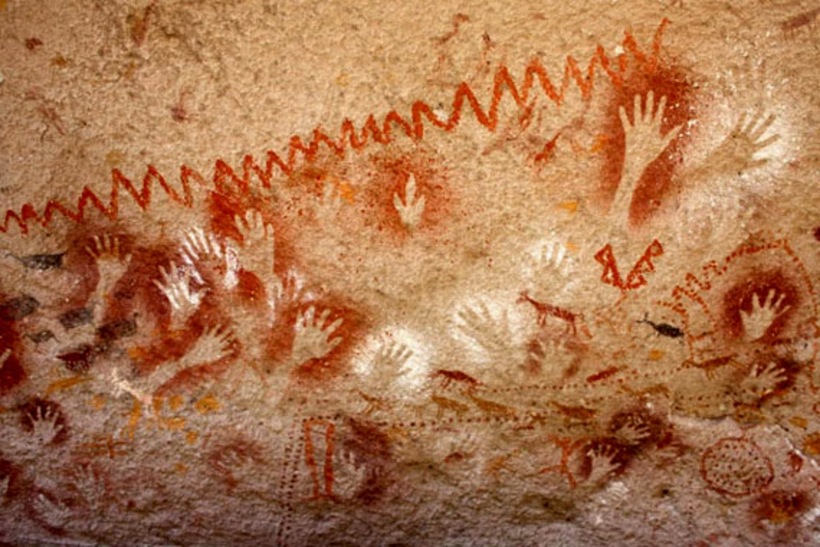 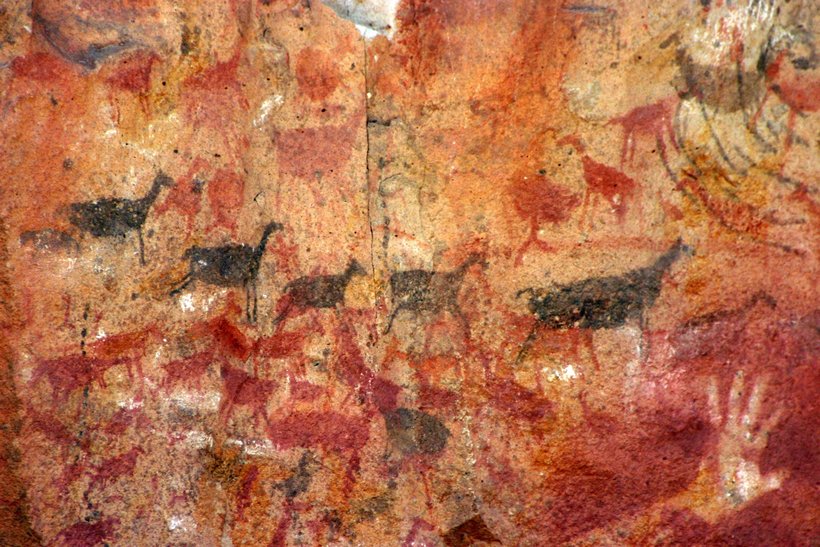 Patagonia is a rather harsh region in terms of nature, where strong and cold winds blow all the time, and the fauna and flora are not diverse. It was just as inhospitable about 15,000 years ago, when settlers from the north came to the land. Different research methods give a range of ages for the earliest images from 9.5 to 13 thousand years. And the last drawings, according to scientists, were applied to the walls of Cueva de las Manos about 2,000 years ago. That is, people have lived here for quite a long time, and the caves themselves were used not only as dwellings, but also for ritual purposes. The inhabitants of the caves were most likely the ancestors of the Teuelche Indians, who still live in the south of Patagonia today. Today, this remarkable cave, whose walls bear the handprints of the oldest people in the Americas, is often visited by travelers, and many Patagonia itinerary organizers include it in their tours. 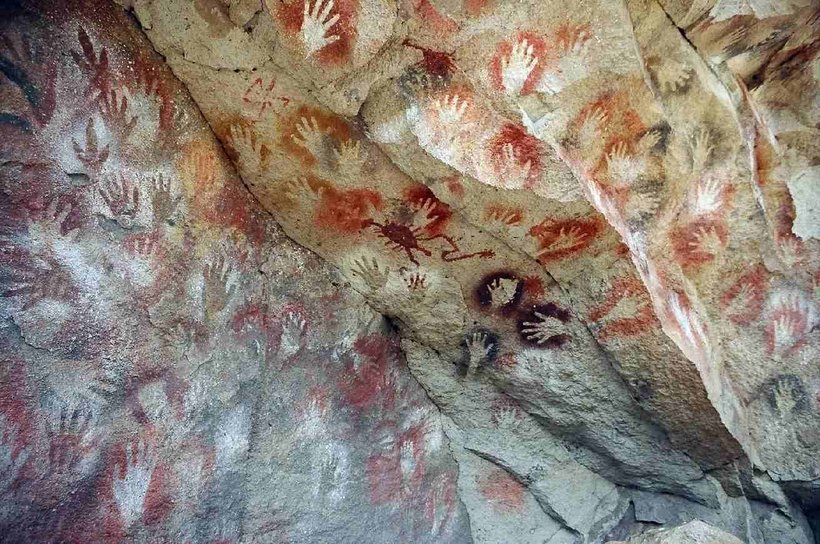 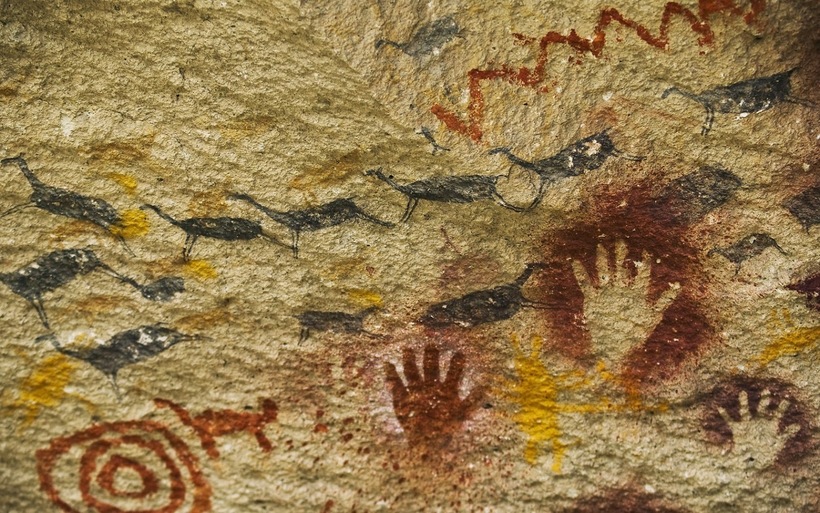