Large salt lake Dabahtay-Nur on the map of Baikal

Dabahtai-Nur is located in the central part of the Tazheran steppe, this salt lake is separated from Baikal by 11 km, it is about 0.5 km wide and 3 m deep.

For a long time, the wonderful nature of Lake Baikal has been fascinating, attracting the attention of numerous tourists. Before coming here, people don’t even realize that there are other natural wonders near the largest lake. One of these wonders is Dabahtay-Nur, which means “salt lake” in Buryat language.

How to get to the salt lake

Journey to Dabakhtay-Nur starts from Irkutsk, where you can arrive by plane, train on Trans-Siberian railroad or by your own car. You can get to the salt lake by bus, car, on foot or by bicycle. Travel time by bus – 5 hours, for the car the time is significantly reduced.

From Irkutsk you can get to the village Elantsy by regular bus №204. It departs every day at 10 a.m. from May 1 to October 31. In early spring, winter and late fall, the bus does not run due to the harsh weather conditions.

Another bus with the same number departs from the Irkutsk bus station in the evenings 3 times a week on Wednesdays, Fridays and Sundays. The departure time is 17.00.

At 9:00 am from the bus station via the village of Elantsy bus route 507u departs. The ticket costs 165 RUR. Children up to 7 years old travel free of charge. From 7 years old you pay the full cost of the ticket.

If you are traveling by private or rented car, you should choose the Kachuga tract, which is easy to travel from any point of Irkutsk. After passing through several small settlements: Oyok, Ust-Ordynsky, Bayandai, Kosaya Steppe, you will easily get to the Elantsy settlement. You can buy food and water at stalls along the road at prices starting at 100 RUR per bottle. Nearby there are toilets which you can visit for 35 to 50 RUR.

You can get to the lake on foot or by renting a car. You can drive on unpaved roads which can be used by any car.

At the end of the last century in the middle of the Tazheran or Tazheran steppe were extracting sulfate, which is necessary for the production of glass. The materials were subsequently taken to a glass factory in Ulan-Ude. Karst phenomena and the effect of different temperature regimes led to the formation of a lake. Its waters absorbed the nearby road.

Attractions of the lake

You can visit the caves with preserved rock paintings, bays, among which a special place belongs to the bay of Aya. Tourists can visit the territory where they work out new minerals: tazheranite and azoproite.

Tourists usually visit the steppe with Dabahtay-Nur Lake located here from late spring to late October. Professionals advise to come here from early May to late June. This is the time when the steppe begins to bloom and the water in the salty lake acquires a bluish hue. Sitting on the shore, you can listen to the croaking of frogs and the singing of numerous birds.

In early autumn, nature is also optimal for travel. Numerous grasses, flowers amaze with their beauty. The sky takes on an unusual hue.

It is possible to visit the lake in winter, but you need to be prepared for harsh weather conditions.

Where best to stay and live

In recent years there is an offer to accommodate tourists in yurts of local people. There is no exact price for this service. It is set on the basis of an agreement directly on the spot.

Some traveling people prefer to rest “savage”, in tents. On the shore of the lake for their needs is a small store where you can buy water, food, with a nearby bio-toilet.

Small restaurants at the campsites offer Buryat and Siberian cuisine with fish and meat topping the list. Tourists can try traditional omul. The fish is offered fried, boiled, and even raw.

Here you can enjoy the taste of Baikal specialties: raskolotka and zagudaya. Raskolotka is fresh frozen fish sliced in small pieces. It is served with salt and pepper.

One can order zaguday which is a cut of raw fish served with salt, butter, onions, and pepper.

There is a great demand for such a meat dish as Buryat poses. In appearance, they look like dumplings of large size. Tourists can try the soup made of lamb meat, which is called buhler.

As drinks are offered green tea, diluted with milk, or infusion based on natural herbs. In some cafes you can drink the original berry morsel, as well as sea buckthorn sbiten.

During the summer you can buy a variety of berries, which are sold by locals. At the end of August and until the end of October you can eat mushroom dishes.

Tips for the tourist

In the entire Baikal area, including near the salt lake, it is possible to encounter ticks that carry encephalitis. But you should not worry too much, imagining various horrors. Tuck your pants into socks, hide your hair under a kerchief or cap, spray your hands, legs at the folds, clothes and shoes with a special spray. All these measures will help prevent the risk of an encephalitis tick bite.

READ
All the most interesting places of Lake Baikal

If, despite the precautions, you were bitten by a tick, you should have it removed and take medicine. After returning from a trip, you should visit an infectious disease doctor and have tests done. It will help prevent the development of a dangerous illness.

Before the trip, you can take out an insurance policy, in which to include a point that implies a tick bite case.

It is worth bringing sunglasses. Necessary sunscreen, as due to the active action of the sun, you can get seriously burnt.

It is impossible to find a pharmacy near Dabahtay Nur because of its absence, so you should take care of necessary medicines in advance.

The area of the lake is very picturesque, so it is worth a visit. If you take all precautions, the vacation will deliver only the best impressions. Returning home, you will not forget the beautiful scenery for a long time, so soon come here again to enjoy the pictures of nature. 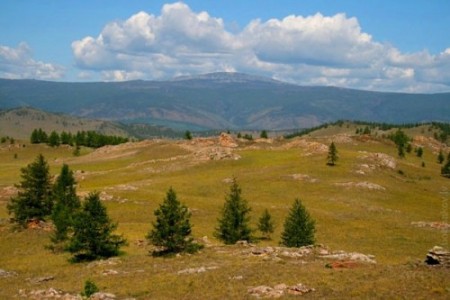 Tajeran steppe is a truly unique natural complex. This area is so famous because there are a lot of specific, rare minerals here. To the north, the steppe starts from the Olkhonsky Gate Strait, and to the south, it reaches the Anga River. From the west, the steppe adjoins the Primorsky ridge, and in the east, the Baikal Lake. The word “Tazheran” in the local dialect means “letnik”, a place of summer migrating.

Tazheran steppe has a very interesting, diverse landscape. Here one can see relict spruce forests, light pine forests, sand dunes and steppe expanses, rocky outcrops and hilly terrain. Many beautiful bays of Baikal are adjacent to the steppe. The most famous among them are Sagan-Zaba and Krestovka.

The age of the Tazheran massif is about 400 million years. This is one of the most interesting geological places in Baikal. Up to 150 minerals can be found in these places on the area of just one square meter. Semiprecious and precious stones such as zircons, sapphires, blue dioxide crystals, colorful spinels and rubies have been found here. Two new minerals, azoproite and tazheranite (this mineral was named after the Tazheran steppe), have been found in these places.

Such a variety of minerals is associated with the complex geochemical and geological history of this massif. The massif was formed as a result of three successive intrusions of different magmas – granitic, alkaline and gabbroic. Each intrusion was accompanied by different metasomatic and contact-metamorphic processes. The geochemical specificity of the main minerals of these places was determined by the combination of magmatic melt, which contained a lot of alkalis, volatile and rare elements, and highly magnesian environment, rich in shale, gabbroids and titanium. The formation of certain minerals also determined a wide range of temperatures, from very low to rather high, and the abundance of titanium-zirconium and magnesian minerals.

There are very many interesting caves in the steppe – Random, Oktyabrskaya, Tontinskaya Dream, Malaya and Bolshaya Baidinskaya caves, and Vologodsky cave. Some of these caves have very impressive size (for example, the depth of the cave Dream – 52 meters, the length of the moves – 830 meters). Many of the caves have underground lakes, glaciers, stalactites and stalagmites of various shapes. There you can see the remains of ancient man’s stands. Interesting places, which testify to the presence of ancient cultures in these places, starting from the Stone Age, are not only in the caves, but also in the steppe itself.

This arid steppe has many salt lakes. It is arranged in a chain in a longitudinal valley. The largest lake is Dabakhtay-Nur (“salt lake”, its depth reaches 3 meters, width – 0.5 kilometers). The water in these lakes is sulphate and predominantly sodium. Water salinity is from 2.3 to 12.8 grams per liter. Over the past 20 years the mineralization of water in the lakes has increased two to three times. The shores of some lakes are covered with salty mud with a smell of hydrogen sulfide. In the past, sulfate was extracted from these lakes and exported to a glass factory in Ulan-Ude. The local population uses these muds for treatment.

In the 1970s, a new lake began to form at kilometer 108 due to thermokarst phenomena. It swallowed up about a hundred meters of the road. Now the diameter of this new lake is 250 meters. A new bypass road was built around it.

If you do not make long stops, it takes about half a day to travel across the Tazheran steppe and visit the Aaya Bay. During that trip you may visit the Sagan-Zaba cliff (there are preserved rock drawings, which are more than 2500 years old), the sacred Yekhe Erd mountain, where in the ancient times the Yerdyne Games grand festival was held, see the caves at Aaya cape, visit Buryat uluses, look at the yurts, where Buryat cattlemen live in summer. When traveling, it is better to stay as close to Baikal as possible, so that you can see it from the mountains