Mysterious blue holes in the ocean: windows to the underwater world or an attraction for divers?

The ocean itself is a natural mystery with an incredible diversity of its inhabitants, underwater plains and mountains, currents and drifting icebergs. The ocean abysses and blue holes hold a lot of secrets and mysteries. The latter are tens of thousands of years old sinkholes. Blue holes always attracted thrill-seekers and explorers. But in recent years they became interested in divers, turning their dives into a real underwater attractions. What are they, who “lives” there, how can you get there? Today our story about the world’s most famous blue holes in the ocean.

It is a true symbol of Belize. In any picture of this country you can see first of all a blue hole and many dark spots that are scattered across the Caribbean Sea. This blue hole is considered the largest (width 305 meters, depth of 120 meters) and the most attractive in the world. French explorer Jacques-Yves Cousteau personally dived in it and included it in the top 10 best places in the world.

Anyone can dive into it, as long as they have the equipment and basic skills. At the depth of the hole swim reef sharks and fat goopers. They can see a beginner. And here below descend amateurs to explore the sea mountains with stalactites – experienced divers.

Blue Hole on the Red Sea

In Egypt, near the small village of Dahab, there is the most favorite dive spot in the Red Sea. In diameter the underwater funnel is small, only 50 meters, but its depth is a hundred meters. Thanks to the sunlight, it looks like an unprecedented beauty tunnel, beckoning divers to penetrate farther and farther. The place is beautiful and very dangerous. Many amateur divers and daredevils never returned from this tunnel, as they tried to go through the long passage, which is at a depth of 54 meters, to the open sea.

READ
Valaam Island and its sights

Dive into the hole can only be with an experienced diver, and it is generally not recommended for beginners to swim at a depth of less than 9 meters. There are diving schools in Dahab itself (there is even a Russian school of this type).

Blue hole in the Bahamas

The Bahamian archipelago is rich in underwater caves and blue holes, but only a small portion of them have been explored. Long Island Lagoon has the famous Dean’s Blue Hole, the deepest of the vertical underwater caves. Its depth is 200 meters. But not only divers like to dive in it, but also athletes who dive without scuba tanks and hold their breath for a while (this sport is called freediving).

Dina is a training site for the Vertical Blue freediving team. And the members of this team even give lessons and master classes in freediving. By the way, few people dive here with flippers. A world record was even set for 101-meter dive into the blue hole of Dean.

Blue Hole near the Orot peninsula

There is an attraction of its own in the Pacific Ocean near the Orot Peninsula – the blue hole. It is only for professional diving, as the cave is deep. And to get to it, you need to swim to the entrance, which is at a depth of 18 meters. Once down you can see all sorts of ocean life, including turtles, rays, barracuda and others.

In general, this oceanic region has many mysterious places where divers love to dive. Thus, the island of Guam is known not only for its gorgeous beaches, but also for its diving spots. The ocean bottom is full of unusually beautiful coral reefs and shipwrecks. Experienced divers dive here.

There are also underwater curiosities in the Adriatic Sea. On the western shore of the island of Korcula, in Croatia, there is a blue hole. Of course, compared to the previous ones, it is quite small – 35 meters deep, but very picturesque. The entrance to the cave is ten meters deep. The walls of the cave are reflected in the sunlight, and here you can see turtles and octopuses, crabs and shrimps, sometimes small sharks swim through.

In the town of Vela Luka is a few scuba diving schools, where you can take a couple of scuba diving lessons for beginners, and then with an instructor dive into the blue hole.

A picturesque place that is beautifully viewed from the cliff is the Blue Hole in Malta. It is small and is located near the island of Gozo. Divers and beginners often come here to dive into the water – to find this “well”. And you can get into the hole through the arch in the rock under the water. The depth of the hole is about 60 meters. Because of the transparency of the water, it is visible almost thirty meters under water (if you look at the underwater cave from the rock).

The local school gives diving lessons, and for 5-7 courses you can safely dive into the hole in Malta. Usually the dives are done with an instructor. You will be delighted with the underwater world that inhabits these parts!

Dear reader, if you haven’t found the information interesting for you on our site or in the Internet, write to us at info@triphints.ru and we will surely write useful information just for you

You can read about how our site works in the article “Independent Travel with TripHints.” 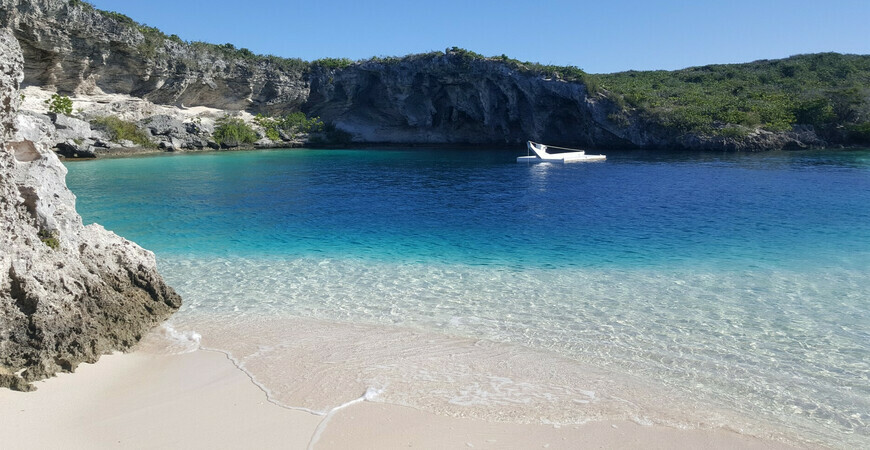 The Bahamas are known not only for their islands, beautiful scenic beauty and comfortable vacations, but also for a Blue Hole called Dean’s. Don’t be surprised, it owes its name to the owner of the nearby land.

Before continuing the description of the Blue Hole, we should tell you what the term means. Blue holes are commonly referred to as vertical karst caves, which are well below sea level. It is believed that they arose due to the washout of depressions in the limestone rocks. The adjective “blue” holes is derived from the characteristic color, or rather the color difference that can be seen at the edges and in the center of the sinkholes.

Until recently, Dina held the status of the deepest Blue Hole, but then gave it up to the Dragon Hole, located near the Paracel Islands (an archipelago in the South China Sea).

The length of the Blue Hole is 202 meters. Its diameter at the surface is 25-35 meters. From about 20 meters depth it begins to expand up to one hundred meters.

Diving into the Blue Hole in the Bahamas

Needless to say, that such a mysterious and unusual place simply cannot suffer from lack of attention, especially from divers and freedivers (divers who dive into water without scuba, holding their breath).

The very first diver to maximum depth was Jim King in 1992. Eighteen years after this event, world champion and freediving world record-holder William Troubridge was the first man ever to reach the 101-meter depth without any equipment. The record was set in the Blue Hole of Dean.

Since then, this place has become the training base of the Blue Vertical diving team, which includes William Troubridge, who we already know. Periodically themed competitions and festivals are held here.

Anyone can take up this extreme sport. True, before diving do not forget to objectively assess their skills and abilities. And even better take a couple of lessons from professional divers. By the way, every winter the legendary William Troubridge holds his master classes here.

Casualties of the Blue Hole in the Bahamas

Dean’s Blue Hole is considered relatively safe for diving. At least no deaths have been reported here in the history of diving.

However, the Blue Hole, and Dina is no exception, is shrouded in all kinds of myths and legends. One of them tells of a sea monster that lives in the depths of the sinkhole. According to the legend, the huge monster resembles an octopus or a squid with long tentacles. The creature is voracious and aggressive, and his favorite activity – sleeping and hunting the residents of the local town of Clarence Town and, of course, divers. Although it sounds implausible, many divers and fishermen claim to have encountered a large octopus similar to the creature described above.

No matter what legends may say about Dina, it can never compare in fame to another infamous hole in the Red Sea (according to official data, it has taken the lives of a hundred people).

Blue Hole of Dean is located in the waters of Long Island (near the town of Clarence Town).

The best way to get to Long Island is by plane. The island even has a domestic airport, Deadmans Cay, which makes it a little easier. But, unfortunately, that’s where the benefits end. If you’re flying in from Moscow, be prepared for three or four connections (Dublin, Toronto, London, Paris, New York or Miami) before you get there. And you can’t miss Linden Pindling International Airport in Nassau, either. The journey from Sheremetyevo to Didman’s Cay may take more than 24 hours.

You can also reach the southern island by water. If you are in Nassau (New Providence Island), you can take any ferry to Long Island. For example, the Bahamas Ferry Service. For information, the distance between the islands is 313 kilometers. You can also get to Long Island by ferry from the United States. Most voyages depart from the port of Fort Lauderdale, Florida.

It is more convenient to travel around the island in a rental car. If you’re driving to Blue Hole from central Long Island, head southwest on Queens Hwy . There is an option to go around the island by boat or boat. Local cabbies can be found along the coast.

As for cabs, they’re rare on the south island. Locals mostly ride motorcycles, bikes and cars.