Or as they are also called – Walumbe dens. They are located in Uganda on the Tanda hill. More than 200 strange and very carefully made holes from 3 to 70 meters deep. Who made them and why – is not clear.

According to local legends, the sky god Gulu was angry at the essence of death Walumbe and threw him to the ground. But even that was not enough. He sent his brother Kaikuzi after him to destroy Walumba. But he wasn’t a fool, so he dived into the ground. Kaikuzi followed him. Walumba comes up, dives down again. So they played catch-up until Kaikuzi got bored. In the end, death remained on the ground among the people. And these mysterious holes appeared in the hill.

Ufologists believe that they are the result of aliens landing and testing a secret weapon during a visit to Earth.

Scientists believe that they are traces of mining. A very, I must say, dubious version, given that nothing useful has ever been found in the vicinity. Plus the incredible laziness of the local population, it seems genetically incapable of making such smooth things in the solid ground.

That’s how they are – the mysterious dens of Valumbe.

The locals believe that in the holes made by death settled the spirits of other gods. Therefore formed here numerous sanctuaries. Warlocks constantly hold séances here and all kinds of infirmity flock here from all over Uganda in the hope of a miracle.

And so they sit all day long in this little settlement. Under the trees, next to the houses. Waiting for miracles. They’re always smoking homemade cigarettes on long, graceful mouthpieces. And it’s not tobacco smoke hovering over all this. And their faces are all so mysterious and enigmatic. As mysterious as the death holes themselves.

It is said that many travelers who have been here have experienced unexplained fear and terror, panic attacks. I will not say anything about fear and terror, but everyone experienced a slight panic when we were told that one can move around the territory, where the burrows are located, only barefoot. Not desecrating shoes that trampled ordinary ground, the land is sacred.

We didn’t know then that sick people from all over Uganda were coming to this Wailumba. We just looked around and somehow got sad.

As an alternative, we were offered these wooden tortoiseshells.

Who they were taken from, we preferred not to think. And we even tried them on.

But then we decided that there will be no two deaths, and one can’t be avoided. And modern medicine generally works wonders, especially in the field of skin diseases. So we decided to go barefoot.

In houses without doors and next to houses, leaning against their walls, people were sitting, smoking something. On seeing our interest in them in the form of aiming cameras, the guide told us at once that photographing people is by no means allowed. Everything around is allowed. But of people – no way. That’s too bad. Such picturesque faces were there.

We’ll go back to the houses and the people a little later. We’ll even look inside. For now, we’re going to those sanctuaries and death holes.

The tour was led by a local who spoke a lot, but in some local language. The interpreter was our driver, who knew English on a common level, but obviously did not plan to work as a tour guide.

As a result, a five-minute speech of our guide, he gave out something like: “It’s a pit.

So we had to use the knowledge we got from the Internet and to make up some ideas ourselves as we went along.

What the locals are good at is the iron. All around are literally permeated with these things.

As far as we can tell, these things aren’t made around here. It would be strange if anything at all was made in this place, riddled with witchcraft and rituals. It seems that those who long for healing bring them themselves.

They are the rods-amulets used to surround shrines, dens, and fires to keep the spirits that dwell there from coming out and possessing someone.

The amulets are apparently made according to some specially designed pattern. However, not everyone follows the pattern. Look at this exhibition of marvelous divisions.

But it’s time to move on to the very holes for which all the fuss is about.

There are indeed holes. There are a lot of holes. They vary. From very neatly worked to some almost overgrown holes.

Some are named after spirits who are hiding in them.

Some are covered with some kind of rag cloth. To make sure the spirits don’t get out.

And this, apparently, is proof of miraculous healing. The chair has been discarded for lack of use.

It’s time for us to go into the head wizard’s house. See how the healing process works.

The sorcerer’s house is semi-dark, trays of gifts for the spirits and still the same smell of not tobacco smoke.

And people lying in wait to be healed.

And here, while we were sitting, we were told that every day all the very sick of various illnesses come here. In just about an hour the big daily ritual will begin, so gradually more and more sick people gather in the village.

At this point everyone somehow quickly wanted to retreat from the lodge. Half of them decided to stop the tour as well. We, on the other hand, walked to another shrine.

Some absolutely incomprehensible things near the fire. But we did not even begin to specify what they were for. It is clear that they are very magic.

Near the tree – a lot of different clay pots. They say that these are sacrificial jars. They are brought to the gods when they ask for children. How many children are asked for is the number of necks of the jug.

There’s also a magic hollow in this tree. This hollow goes all the way down to the ground and continues with a hole. If you put money there, it will fall right into the hands of spirits. But the main thing is not to put your hands into the hole. So that the spirits don’t drag it back to themselves.

Naturally, I immediately decided to check how deep the hole went. Alas, if I put my hand down there, it became clear at once that about 10 centimeters later the hollow ended. And money left to the spirits, apparently, will be transferred in some other way.

We are such tourists distrustful. Something was not enough for us to finally get into the spirit of Nore Valumbe. Of course we were offered to smoke the magic local pipe. But we somehow declined at once, deciding that we had enough magic.

And the word “Valumbe” became a dirty word for the rest of the trip. We used to say, “That’s some kind of vronumba.”

Death dens in Uganda: Who drilled deep mines into the rock 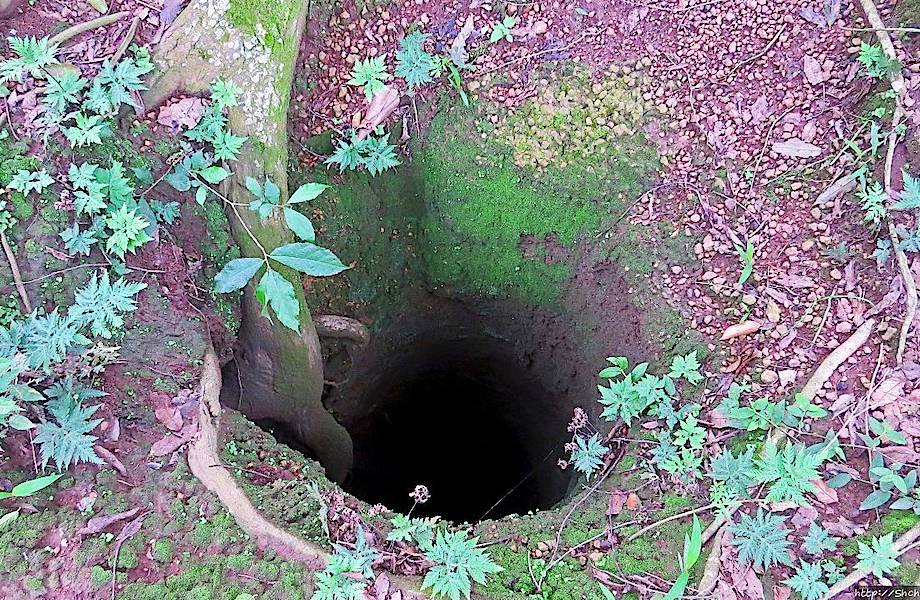 The Ugandans call these perfectly round holes in the ground “Death Numbers of the God Walumbe. Scientists believe that their appearance can be explained by earthly reasons. In places of mass accumulation of these holes, in the area of the hill Tanda, constantly live ministers of the cult of the god, and the number of travelers who are not afraid to touch the mysteries of the other world, is increasing every season. 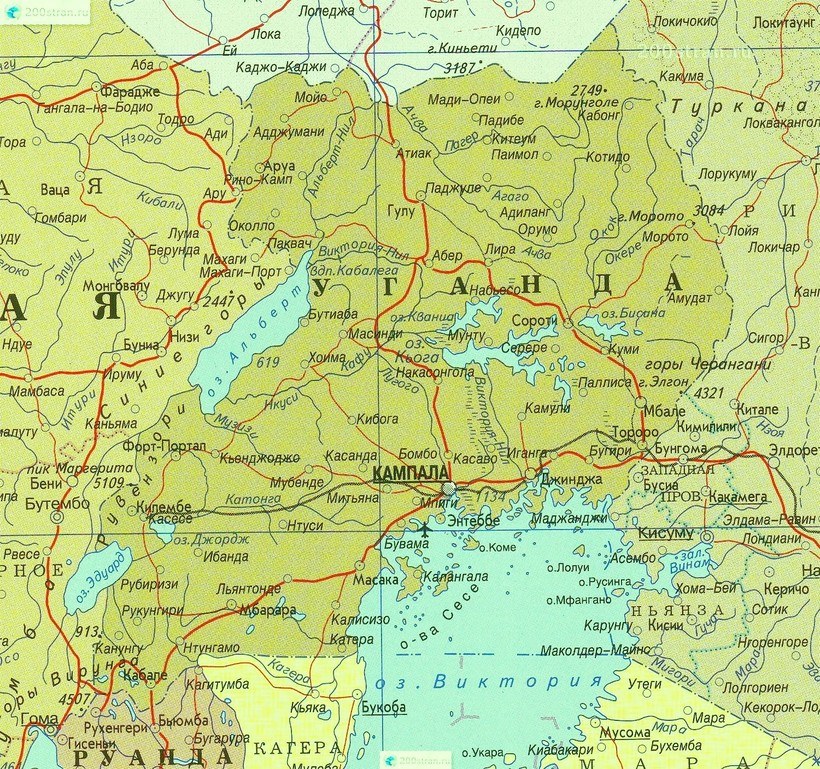 Uganda is an African country located in the center of the continent near Lake Victoria. On the hill Tanda, as well as in other places of the country has been found a lot of round holes going vertically into the depths of the earth. Experts have counted more than 200 mines located in different places on the hill. These holes look like mines, with a width of about 0.5 meters and the predominant depth is 3-9 meters, although holes up to 70 meters deep have been found.

READ
Megaliths of Russia, in detail and many photos

The fact that the holes are made in the rock is striking, and their walls are incredibly smooth and neat. Naturally, it is impossible to make such mines by hand, most likely they were drilled with some kind of tool, but only by whom? 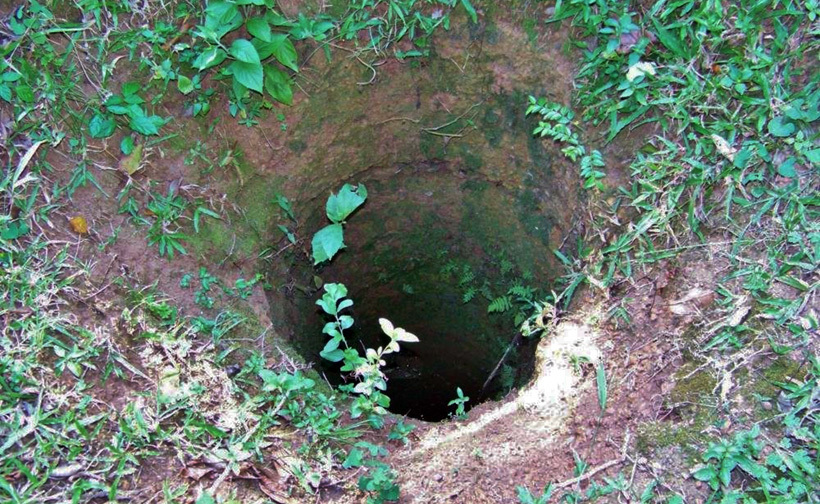 European explorers of these strange holes in 1920-1950’s have counted more than 200 mines in Uganda, which are grouped in 9 groups. In one of groups traces of kaolin extraction – a kind of clay of white color were found, therefore it was assumed, that other holes also could serve for kaolin extraction or were made during search of minerals. In one area of Uganda, these mines were used for food storage and acted as refrigerators. But this is more of a secondary use of existing objects rather than the original cause of their appearance, as the locals had nothing to do with them. Scientists have not been able to establish the exact age of these holes.

Some Ugandans have their own opinion as to how the vertical round holes in the ground came to be. One local legend says that a god of death named Walumbe was banished from heaven to earth. He was pursued by another god named Kaikuzi. In order to hide from him, Walumbe began to dive underground and left many holes to confuse his pursuer. The place where Walumbe hid forever underground is today especially carefully guarded by the ministers of the unusual cult: it is covered with a large number of objects and surrounded by pointed spears. 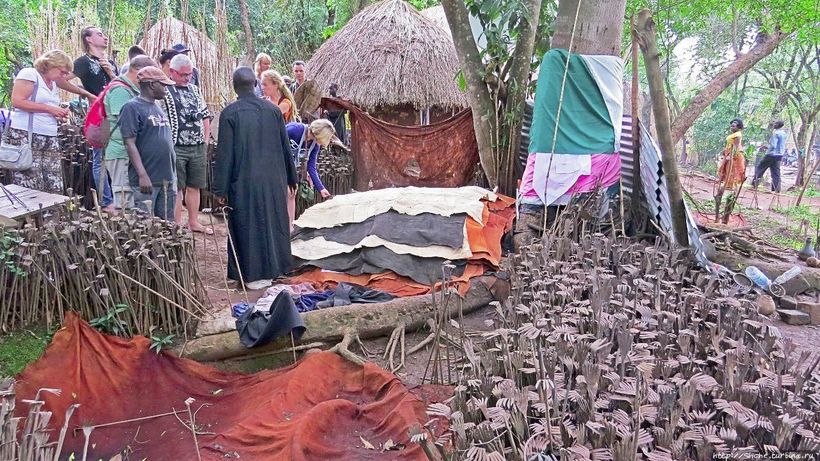 Tourists are often brought here, told this legend and shown the round holes in the ground. It is highly recommended not to break away from the group and explore the surroundings on your own. On the hill Tanda mines scattered everywhere, and most of them hidden from the eyes of the rough tropical vegetation, so a great risk of falling into one of them.

READ
Cherepovets swamp, mystery and mysteries of the lost place

Lovers of all things mystical and unusual assign the hill Tanda to the places of power, well, many travelers frankly say that all these legends were created just to attract tourists, and do not see in these holes in the ground anything supernatural. Although the question of their origin is still open. 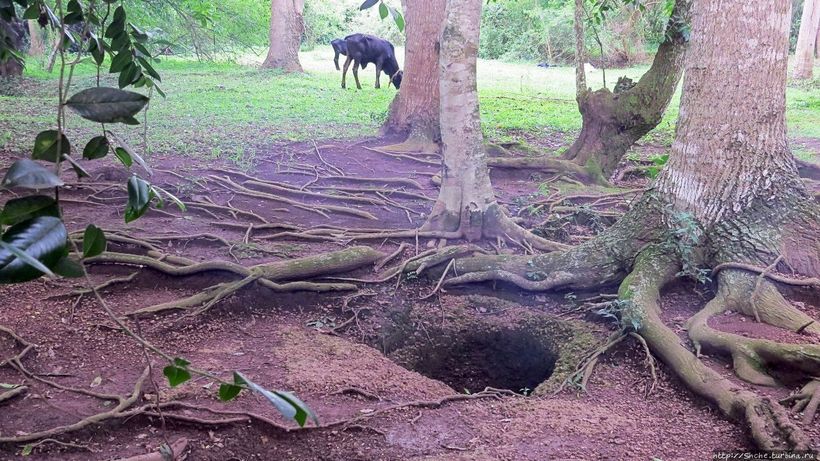 A number of specialists connect these holes with the mysterious Bachwezi people who founded the Kitara Empire in the area of the Great Lakes of Africa. Many Ugandan tribes tell us that several centuries ago this place was inhabited by white people who came here from the north and were more technologically advanced. Several structures have been found in Uganda that indicate the existence of advanced urban settlements here. If the people of the Kitara empire may have built towers, fortified walls and water supply systems, they may well have drilled holes in the bedrock to extract white clay or other minerals. The inhabitants of the empire and the Bachwesi people left no written records, and local legend has it that these highly evolved people disappeared as suddenly as they appeared.

Be that as it may, the mines in Uganda are still a mystery and scientists have never been able to reach a consensus on their origins. 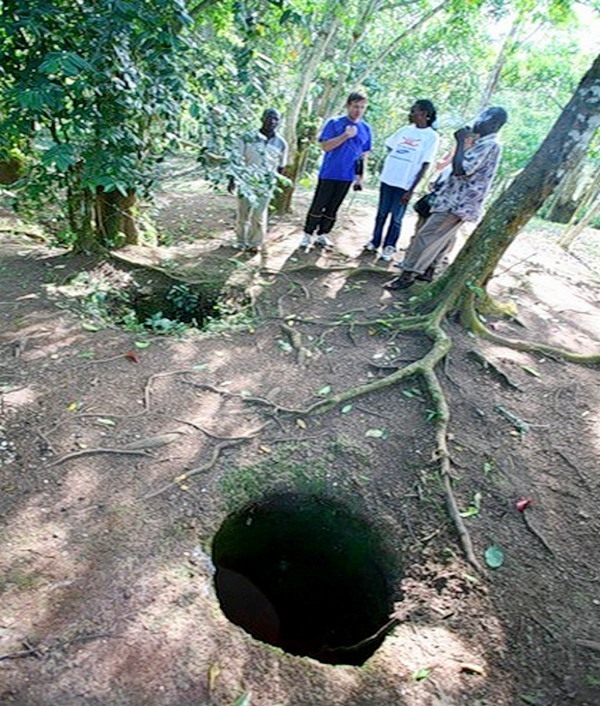