Some elements of the map can not be inserted on the site. Open the preview and check the view of your future map.

Put marker on the map in the place where you need to fix the error.

Describe in detail what needs to be fixed in that spot.

Import locations to the site

If you made a backup copy of a location you can import it to the site. Imported locations will be added to the already saved locations:

Cities in this region

Krasnodar region is located in the southwest of the North Caucasus. The map of Krasnodar Krai clearly shows that the region is bordered by sea by Crimea, and by land by Stavropol Krai, Rostov Oblast, the Republic of Abkhazia, Adygea, and Karachaevo-Cherkessia. The region is washed by two seas: the Black Sea and the Sea of Azov. The area of the region is 75,485 sq. km.

The economy of Krasnodar Region is based on agriculture and processing industries. Interestingly, the region is the oldest oil-producing region in Russia. In addition, the Krasnodar region is the main supplier of valuable tree species. The economy of the region has improved significantly due to the investments connected with the Sochi Olympics 2014. 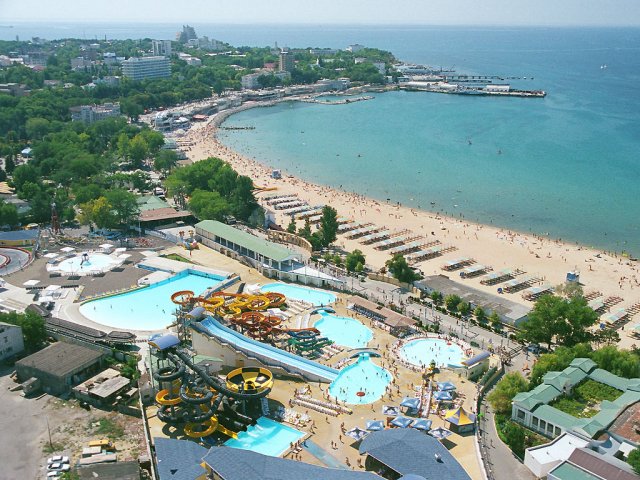 In 1860 the Black Sea Cossack Host was located on the territory of the modern Krasnodar Krai. In 1917 the Kuban region was formed, which in 1937 was transformed into the Krasnodar Territory. 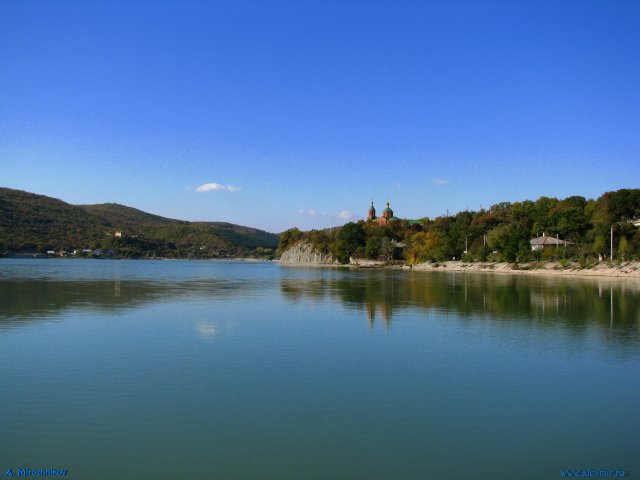 On a detailed satellite map of the Krasnodar Territory you can see the main resort towns: Sochi, Anapa, Tuapse, Gelendzhik, Adler, Yeisk and others. It is recommended to visit the waterfalls of Krasnodar Krai – Big Adegoy waterfall, Grafskiye ruins, Agurskiye waterfalls, Gebeuskiye waterfalls and the Gorge of 40 waterfalls. Among the natural sights also stand out: Mount Svintsovaya in Abinsk, Abadzekh Gorge near Apsheronsk, Akhtanizovskaya Sopka mud volcano, Cape Chugovpas and Dagomys troughs.

It is worth to visit the Champagne Museum in Abrau-Durso, the archaeological reserve Gorgippia in Anapa, the water parks of Gelendzhik, on the beaches of Dzhemete, the Old Park in Kabardinka, on Mount Shahan in Krinitsa, on the Witch Lake in Mostovsky District, the Riviera Park in Sochi and the Lermontov Museum in Taman.

Khlebny Khutor near the city of Pechora

Having once visited Khlebny Khutor in the village of Sorokino, Pechora District, it is impossible to forget the soulful atmosphere of this place. “

Gulrypsh – a summer house for celebrities

There is a town Gulrypsh on the Black Sea coast of Abkhazia, the appearance of which is closely connected with the name of Russian philanthropist Nikolai Nikolaevich Smetsky. In 1989 because of his wife’s illness they needed to change the climate. The case was decided by chance. “

Anaklia is the most modern resort in Georgia

Anaklia is a young, rapidly developing resort on the Georgian Black Sea coast. In August 2011, obtaining city status was timed to coincide with the opening of the first high-class hotel and yacht club. “

Popular tourist spots in the region

Locals and tourists call this largest resort village of the Tuapse region simply – Novomikhailovka. It is known for a large children’s camp “Eaglet” and developed tourist infrastructure. Permanently about 10 thousand people live here. “

“Soviet settlement” – this is how the name of this small resort village, which stretches along the sea for 2.5 km, is translated from Adygean. “

Journey through the museums of resort Khosta

Black Sea Hosta is located between Sochi and Adler. This small coastal village does not have the hustle and bustle that big resort towns are “famous” for. “

To Tikhoretskaya train will go

Everyone has probably passed by Tikhoretsk at least once in his life. After all, the city grew up on the crossroads of the railroads. The first station here was created in 1874 and was named after the nearby river Tikhonkaya. “

Stroll through the old military fortress Lazarevskoye and Svirskoye Gorge

The resort place Lazarevskoye has long been a part of the city of Sochi and is 56 km from its center. The first Russian military fort was built here, near the mouth of the river Psezuapse, in 1839 “

The word “Tuapse” in translation means two rivers. And indeed, the Tuapse River has two sources – Chilipsi and Pshenakho. Here in the VI-II centuries BC there was a major center of the slave trade, where the Shapsugs lived. “

The resort settlement Nebug is located on the shore of the Black Sea between Tuapse and Novomikhailovskoye, at the mouth of the river of the same name. Nebug is designed more for active, youth recreation. “

Dolmens and waterfalls in the valley of the Pshada River

Journey through the valley of the Pshada gives a lot of amazing discoveries. Here there are preserved monuments of megalithic culture – dolmens, beautiful rock cliffs, fragrant flowering meadows and amazing waterfalls. “

Map of the Black Sea Coast

The Krasnodar region is a part of the Russian Federation, which is known and popular for its resorts. Mostly, people come here to rest in the period from mid-May to the end of September. There are about 420 health resorts that offer their services. Among the main resorts on the Black Sea coast are Sochi, Anapa and Gelendzhik.

Localities – towns and cities on the Black Sea coast in the Krasnodar region on the map.

This article will focus not only on the most famous resorts, but all that are in the Krasnodar Territory.

The map is very large and detailed. Enlarge it for easy viewing. This is what the Krasnodar region looks like on the map.

READ
All beaches in Moscow and Moscow region: addresses, cost

Krasnodar Krai resorts on the map

The village is famous for its wonderful climate and a huge number of different attractions.

Special attention deserves the New cliffs, which are practically next to the village. Here are constantly held various sporting events. Abinsk is great for fans of the supernatural, because it is known for the presence of anomalous zones. Also here is famous Shapsugsky burial ground.

One of the most famous resort cities of Russia on the Black Sea. Surprisingly, 280 days a year in Anapa the sun shines. There is one of the longest sandy beaches in Europe. The largest period of tourist arrivals – from May to October. There are a huge number of attractions and places to rest. The resort is considered an ideal place for holidays with children.

Apsheronsk is a town that is popular with fans of active recreation in the settlements of the district. Here hikes in the mountains are constantly organized. And of course, the city has beautiful air and wonderful nature.

The city is relatively young, it is only 115 years old. The climate is conducive to rest in the summer. The maximum influx of tourists is expected from May to October. The city has a well-developed infrastructure. This is the most popular resort in the Krasnodar region. In popularity with it can only compare the resort of Sochi.

One of the oldest resorts, which is located 60 kilometers from Krasnodar. Goryachy Klyuch is popular because there are more than ten mineral springs.

The resort is also distinguished by clean air and gorgeous scenery.

The city of Krasnodar Krai is famous for its very hot summers. In July, the water heats up to + 25 degrees. Beaches are located not in the city, and on the spits that go straight into the Black Sea.

READ
All the beaches of Phuket, where to rest best

Here is a lake Yeiskoe, which is a source of therapeutic mud.

The biggest attraction is Biosphere Reserve, which is of international importance.

Mostovskoy area is considered the southeastern gate of Krasnodar region.

Here there is a beautiful nature and extremely clean air.

The most beautiful city visited annually by millions of tourists.

Infrastructure here is developed no worse than in any modern city in Europe.

There are also a large number of monuments of architecture, because Novorossiysk has a status of a hero-city. The city has the largest water park in the Russian Federation.

This resort does not require much description, because everyone already knows about it. Sochi is one of the most famous resort resorts on the Black Sea and in the world. There is an incredibly developed infrastructure here since the Soviet Union, but the Winter Olympics gave an additional impetus to its development.

It is believed that a person who once came to Sochi, will want to return here in the future, because here you can find entertainment for all tastes. Not without reason many sports and show-business stars prefer to spend their vacations not in foreign resorts, but precisely in the beautiful Sochi.

Temryuk is probably the most picturesque resort, because it is washed by two seas: the Black Sea and Azov. Stations Golubitskaya and settlement Peresyp – popular places among holidaymakers. Here wonderful sandy beaches, relatively inexpensive housing, a lot of interesting sights and entertainment (Lotus Valley, mud volcanoes, dolphinarium, winery Fanagoria and much more).

This place is considered one of the most environmentally friendly on the Black Sea coast.

There are a huge number of settlements of the Krasnodar Territory, resorts, recreation centers and sanatoriums. If a person wants to improve their health, and at the same time a break from the big city, then the Tuapse region is just what you need.

The resort area of Tuapse region stretches on the map for more than sixty kilometers.

A large number of resorts in the Krasnodar region, which you see on the Black Sea coast offers recreation for all tastes and budgets. Therefore, everyone will be able to make the best choice for an ideal vacation.

Options really abound – from expensive 5-star hotels in Sochi (Swissotel Resort Sochi Kamelia or Radisson Rosa Khutor) to the possibility of inexpensive vacation in 2016 in the private sector of small communities on the coast – Kabardinka, Abrau-Dyurso, Dzhankhot.