Devil’s Kettle – a waterfall to nowhere

Devil’s Kettle is a mysterious geological phenomenon in the United States. It is a waterfall that carries half of the river flow into obscurity.

Devil’s Kettle is located in Judge CR Magney State Park in Minnesota, USA, near the northwest shore of Lake Superior (part of the Great Lakes on the Canada-U.S. border).

What is the Devil’s Kettle

The Brule River flows into Lake Superior from the northwest. The river has an elevation difference of about 240 meters. Along its course several waterfalls were formed. One of them is the most mysterious. It lies 2.4 km from the lake shore. It was formed due to a large rocky ledge that divided the stream of the river in two.

There are actually two waterfalls. The one on the east side has two steps and is 15 meters high. This is, in general, an ordinary waterfall. But the second one, the western one, is only 3 meters high. It is called the Devil’s teapot. 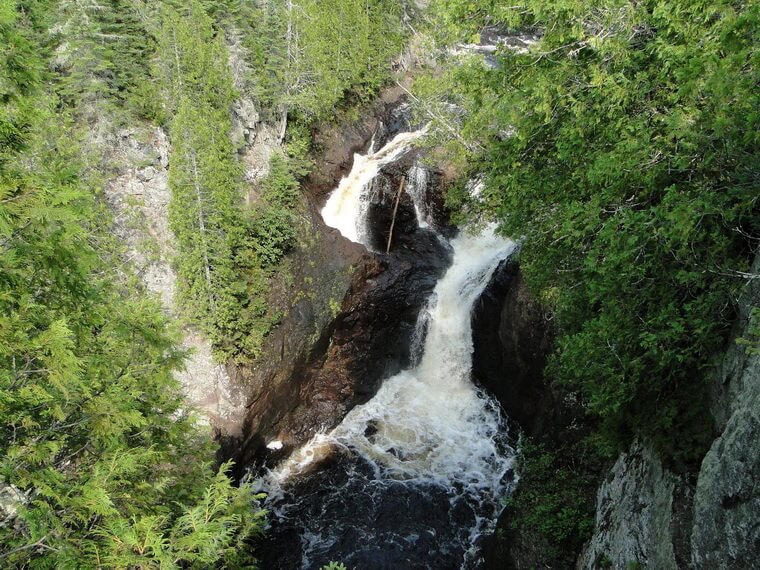 The thing is that the water falls into a depression and … disappears. Like Thor’s Well, no one knows what’s in the depths and where the water disappears to.

The name of the waterfall is most likely related to the kettle effect. It looks very much like the water is filling some bottomless giant reservoir.

Theories of the formation of the Devil’s Kettle

The site of the water outlet was thought to lie below Lake Superior, but it was not found there. For years, researchers have dumped brightly colored dyes, ping pong balls, GPS trackers, and other items into the depression. But so far none of it has been found. All of the items have literally vanished into obscurity.

Rumor has it that a car has even fallen into the Devil’s Kettle and disappeared. But this is highly unlikely, as it is impossible to get to this waterfall by car. 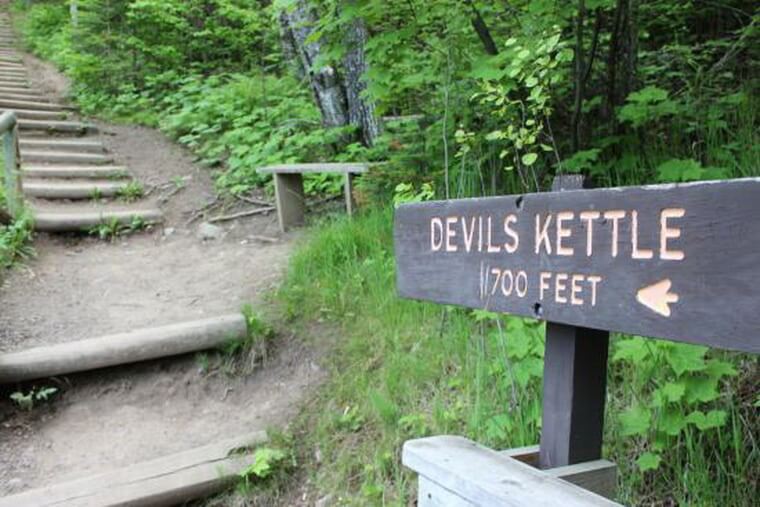 Signpost to the waterfall

There is an opinion that the water goes underground and comes out already under the lake. But this is unlikely, as we need conditions sufficient to ensure the free passage of the flow of half of the river. Even if this were possible, it is likely that the passage would have been clogged with stones, sand, branches and even small logs long ago.

Another theory is that a lava tube formed here millions of years ago.

The problem with this theory is that the rocks at Devil’s Kettle Falls are rhyolite, and lava tubes never form in it. They are only formed in basalt during a lava eruption. Since the basalt layers are very deep in the area, this assumption is not confirmed.

The existence of a large underground cave is also ruled out. They are formed in limestone rock, and there is no limestone in the area.

Has the secret of the Devil’s Teapot been solved?

Experiments conducted in the fall of 2016 and in February 2017 showed that the disappearing water simply flows back into the Brule River below the falls. At the suggestion of state hydrologist Jeff Green, experts measured water flow in front of the falls and a few hundred yards after the falls. The readings nearly matched and were about 3.5 cubic meters per second. The difference was within the statistical error. Thus, it is theoretically proved that water does not disappear anywhere at all.

It was planned to conduct another study with dye, but then that idea was abandoned.

Where did the objects, dropped in the pit, go?

The disappearance of objects is explained by the fact that there is a very strong current inside the devil’s kettle. Its flow is able to keep under the ground for a long time and erase into powder such objects as ping-pong balls. Dyes, on the other hand, would dissolve in the current and disperse. 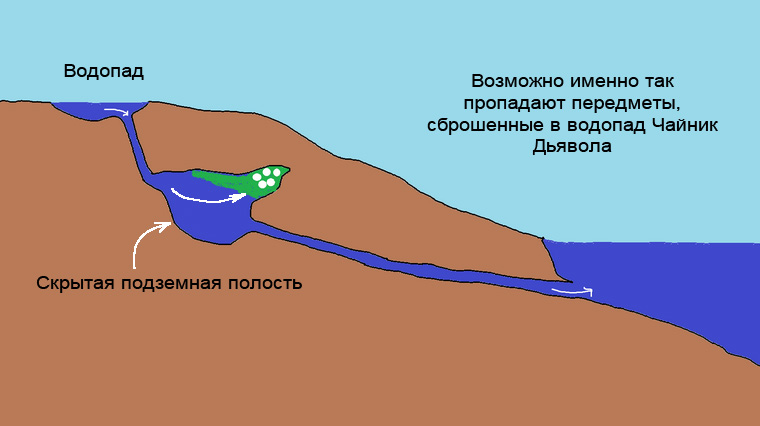 There is a belief that objects dropped into the Devil’s Kettle settle into the inner cavity underground. Although you will recall that large caves are formed in limestone, which is not present here.

The mystery of the Devil’s Kettle: Where the water disappears to in the planet’s strangest waterfall 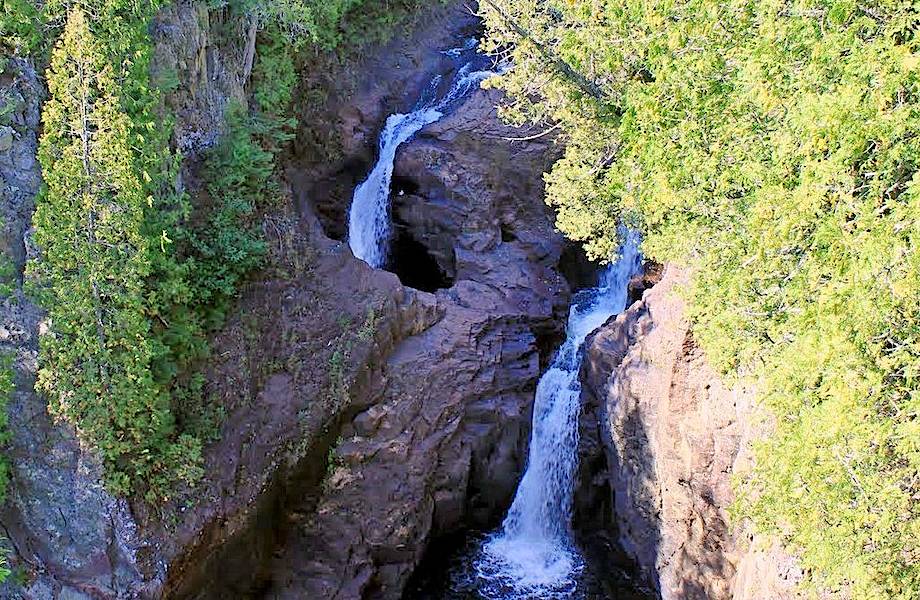 This waterfall has been haunting scientists and ordinary Americans for decades. The fact is that the Devil’s Kettle is a waterfall with certain oddities. About half of the river water falls into a mysterious funnel and disappears without a trace under the ground. Despite all the attempts of experts, no one has ever been able to give an exact answer to the question of where half of the river water disappears to and where the outlet of the underground stream is. 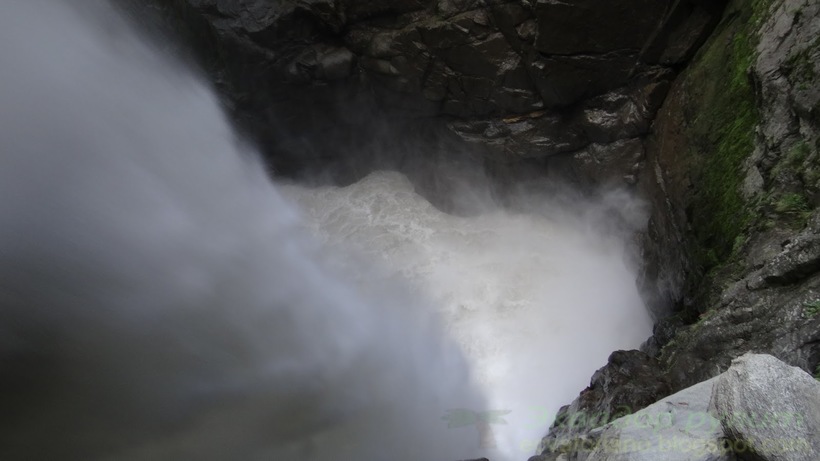 The “Devil’s Kettle” is located in the American state of Minnesota in a natural park. The waterfall is several meters high and is formed by the Brul River, which bizarrely divides into two streams. But if everything is clear with the first, the second stream falls into a stone well and disappears into the bowels of the earth. Underground rivers are not something mysterious and are often found in some regions of the planet, especially in places of distribution of karst caves and voids. But any underground river has a beginning and an end, and in most cases you can easily find the exit of the underground stream to the surface. But in the case of the Bruhl River, it is not at all clear where some of the water from Devil’s Kettle Falls disappears to. In order to determine where the river’s underground water comes to the surface, scientists conducted several experiments. Special food dyes were added to the well and hundreds of small plastic balls were poured out to be able to trace where the mysterious water stream comes out. But this yielded no results: neither the balls nor the colored water were ever seen by the scientists in the nearby region again. Then the researchers decided to launch GPS devices into the funnel in order to determine by signal where the water stream moves. But here, too, they were unsuccessful – after a while the devices stopped transmitting signals and never solved the mystery of the “Devil’s Kettle”.

READ
Mount Rushmore is the mountain of presidents. USA 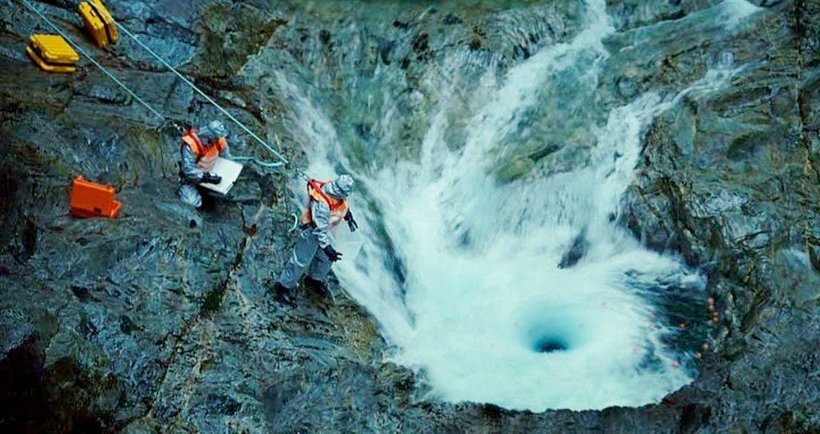 Several years ago, the American hydrologist D. Green also tried to explain the mysterious disappearance of the water stream. He measured the flow of water in the Brul River just before the waterfall, and then compared this figure with the data obtained downstream. It turned out that the figures coincide, that is, according to D. Green’s version, the underground river in this area connects to the main channel. But here is exactly where it happens, the scientist could not answer. Critics of his theory also point out that no dye pigments have been found downstream of the river. And if the plastic beads and GPS beacons could have been deposited in some funnel along the path of the underground river, then the dissolved dyes must come to the surface sooner or later. But this does not happen downstream of the river or in any other body of water in this region. Thus, the mystery of the Devil’s Kettle is still considered unsolved. 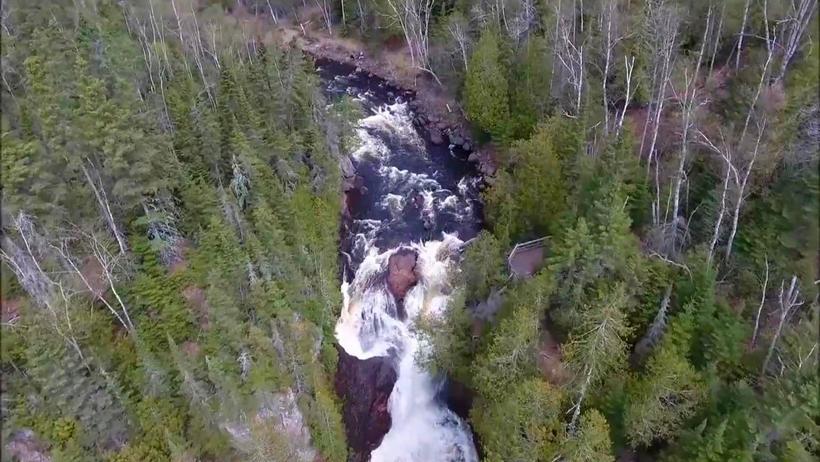 Join our community on telegram, there are already over 1 million of us