The Galleria Doria Pamphili, an art collection in the halls of the aristocratic Palazzo Doria Pamphili owned by the British heirs of the famous Italian family, is a wonderful gift for travellers to Rome! All of the pieces in the collection correspond to inventories from as far back as 1760.

Doria Pamphili Gallery – overview of the collection of paintings

The main part of the collection is represented by masterpieces from the private collection of the Doria Pamphili family. The room where the gallery is located was once the residence of Cardinal Fazio Santoro (Fazio Santoro) at the beginning of the 16th century. In addition to the residence, the gallery also occupies a part of the Doria Pamphili Palace, whose walls conceal an ancient and very interesting history of the noble families, the history of politics and the former European alliances that united the major noble families of Italy: the Della Rovere, the Aldobrandini, the Landi and the Doria Pamphilj.

Both the buildings in which the exhibition is presented and the masterpieces of the Doria Pamphili Gallery are a collection of the results of evolution, territorial annexations, political transformations and the emergence of new states. You will plunge into the cycle of historical events that took place in Roman lands for 500 years and were crowned in paintings and sculptures, music and books. Today, thanks to true connoisseurs of art, they can appear before the eyes of our contemporaries in all their beauty and value. So enter the halls of the Galleria Doria Pamphili so that its world can open up once again!

The Doria Pamphili Gallery: collections of paintings and exhibits

READ
The Kon-Tiki Museum in Oslo, photo and description

Its ceilings are decorated with fanciful paintings depicting episodes from the life of the mighty Hercules (by the Bolognese artist A. Milani (1733)). Scenes from myths and heraldry of the Pamphili family are skilfully incorporated into the subjects of the paintings. The walls of the hall are decorated with expensive ancient Venetian mirrors that are almost priceless today. Near the mirrors there are antique statues, archeological finds, huge vases made of Egyptian porphyry, the history of which goes back to the XVII century and earlier.

The space of the Galleria Pamphili was decorated by the hand of Ginesio del Barba. Along the walls were beautiful works by the artists:

In this room we can see the bust of Pope Innocent X, made of Egyptian porphyry and bronze by Alessandro Algardi.

a number of beautiful works by Jan Brueghel.

masterpieces of the Venetian painter of the 15th-16th centuries. Marco Basaiti, who was born in Albania

In the art gallery of the Doria Pamphili family there are also masterpieces of the great masters of painting – Caravaggio, Titian, Raphael, Bernini and Hans Memling.

The ticket price for visiting the art collection includes an excellent recording – an audio guide, the text of which was compiled and recorded by the gallery owner himself, Prince Jonathan Pamphili. It is said that he and his sister can sometimes be found in the August halls of the palace, roller-skating.

For unforgettable memories of the exhibit, we recommend booking a visit to the gallery by 11 a.m. on Saturday. At that time, the guided tours are accompanied by a real art historian, with beautiful live music performed by a professional orchestra. The price for such a tour is € 30, reservations are required.

By bus, go to Piazza Venezia or Via del Corso.

The Gallery accepts VISA, MAESTRO and MASTERCARD credit cards – reservations are not required. In addition to the collection of paintings, Doria Pamphili offers excellent live classical music concerts and live opera performances with famous singers from around the world.

Galleria Doria Pamphili: A unique collection of art in the heart of Rome

The enormous Palazzo Doria Pamphili, with its impressive facade overlooking the Via del Corso, is usually overlooked by most tourists rushing to see Rome’s many attractions. The palace, still owned by descendants of a famous aristocratic family, hides one of the most prestigious collections of art in the world. The Doria Pamphili Gallery, with more than 400 paintings from floor to ceiling, contains works of Caravaggio, Titian, Raphael, Velázquez, Correggio, Parmigianino and other famous masters of the 17th and 18th centuries. 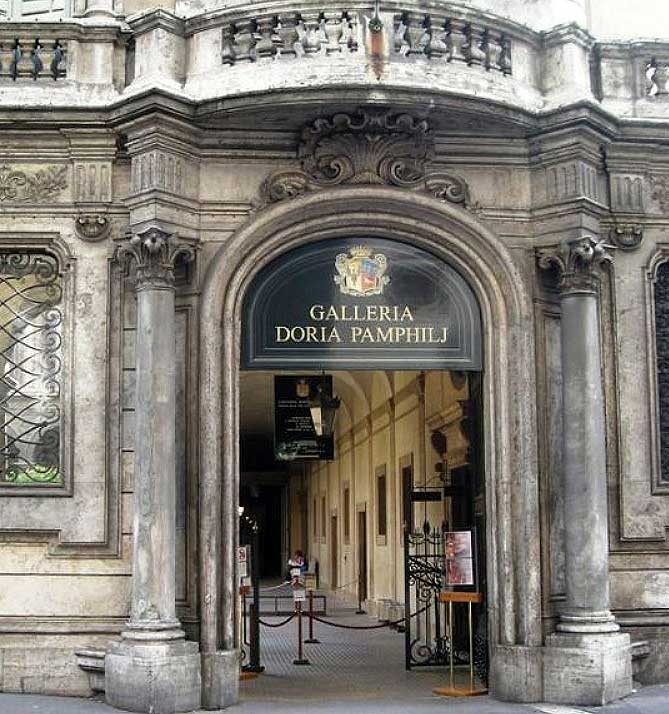 History of the collection

It is believed that the Doria Pamphili Gallery collection was founded in 1651, after Pope Innocent X (Giovanni Battista Pamphili, 1574-1655) had given his nephew Camillo (by right of hereditary restitution – fedecommesso) his own collection of paintings, sculptures and some interior items from the palace in Piazza Navona, obliging the young man to preserve the artistic and archeological heritage of the family. Such a prudent and far-sighted gesture by the pontiff had its reason: in 1647 Camillo Pamphili (1622-1666) married the widowed princess Olimpia Aldobrandini (1637-1681), whose dowry consisted of a grandiose collection of artistic paintings belonging to the Florentine family. This alliance added to an already notable collection, defining the beginning of one of the most magnificent collections of works of art.

Over the following hundreds of years, numerous marriages between members of the noble Doria, Pamphili, Aldobrandini and Landi families increased the collection of sculptures, paintings and furniture several times over. As the wealth increased, the palace itself expanded almost continuously and today consists of several buildings richly decorated inside with marble, gilded stucco and frescoes by famous masters.

Even without a background in painting, a visit to Rome’s largest palace is worthwhile if only to see its magnificent Baroque interiors with beautiful ceiling and wall frescoes. The rooms, which house most of the works of art available for viewing, are among the most prestigious in the building, and are accessed through an additional entrance in Piazza del Collegio Romano. From the central staircase leading to the high floor of the ancient residence, four long corridors of the art gallery open up, framing the perimeter of the Palazzo’s inner courtyard. Many of the masterpieces from the Doria Pamphili family’s private collection are concentrated here, including 17th century paintings, marble busts and ancient sculptures, as well as furniture from the Renaissance masters.

Designed in 1730 by architect Gabriele Valvassori (1683-1761), the most impressive of all the rooms in the palace received its name due to the abundance of huge mirrors housed there. Framed in gilded frames they were brought from Venice and at that time cost a fortune. The bright and luxurious space of the gallery, which gets plenty of daylight from the windows overlooking both sides of the building, reminds one of the Hall of Mirrors in the Palace of Versailles in France. 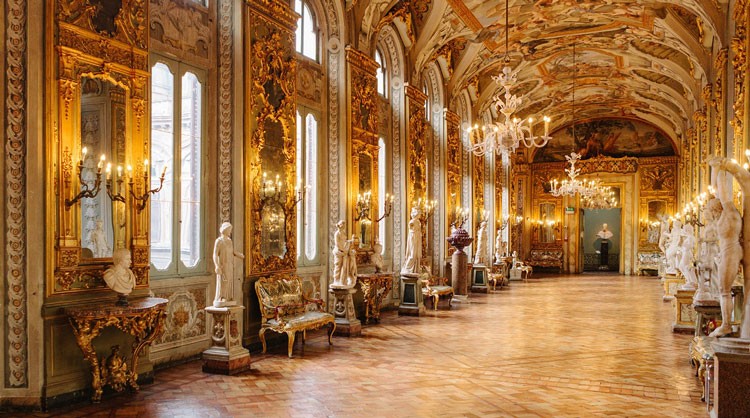 Along the walls are numerous sculptures found in excavations and belonging to the Doria Pamphili family, while the vault of the ceiling is decorated in 1733 by the Bolognese artist Aureliano Milani with frescoes describing the exploits of Hercules, with whom the Pamphili intricately linked their genealogy and displayed in an improvised genealogical tree, also displayed here. 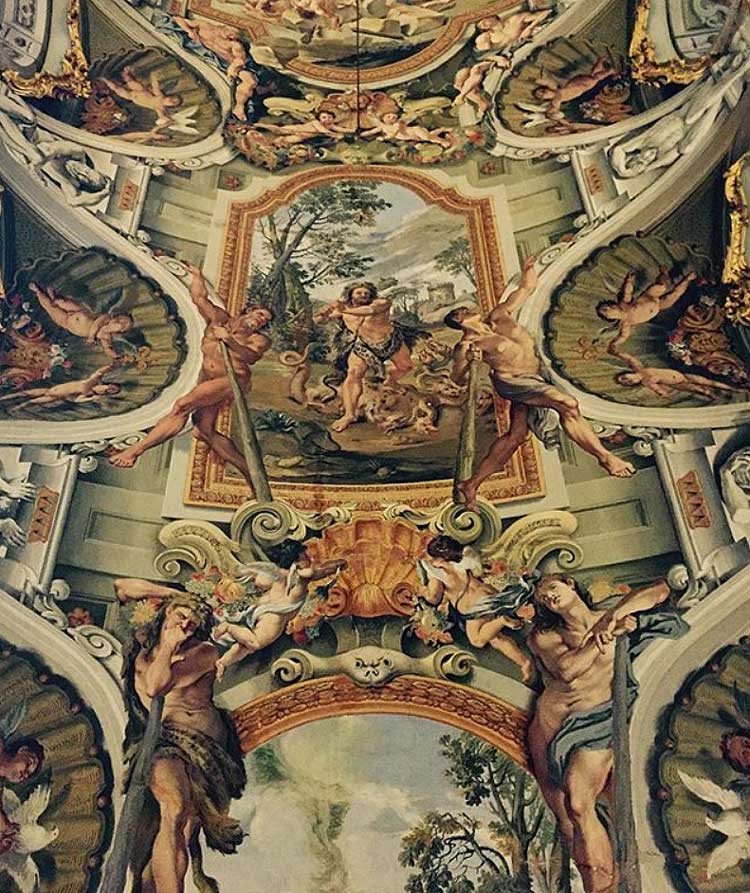 The hall is richly decorated in the Chinese style by the painter Ginesio del Barba (1691-1762). At the beginning of the seventeenth century Pietro Aldebrandini commissioned Annibale Carracci to paint six paintings for his chapel in the family palace, which due to the shape of the walls were made in the form of lunettes. Having painted the first two canvases, Landscape with the Burial of Christ and Escape to Egypt, in 1605, the artist was forced to interrupt the work, entrusting the completion of the order to his students. Known today as the Lunettes Aldobrandini, they adorned one of Doria Pamphili’s galleries after the destruction of the chapel. 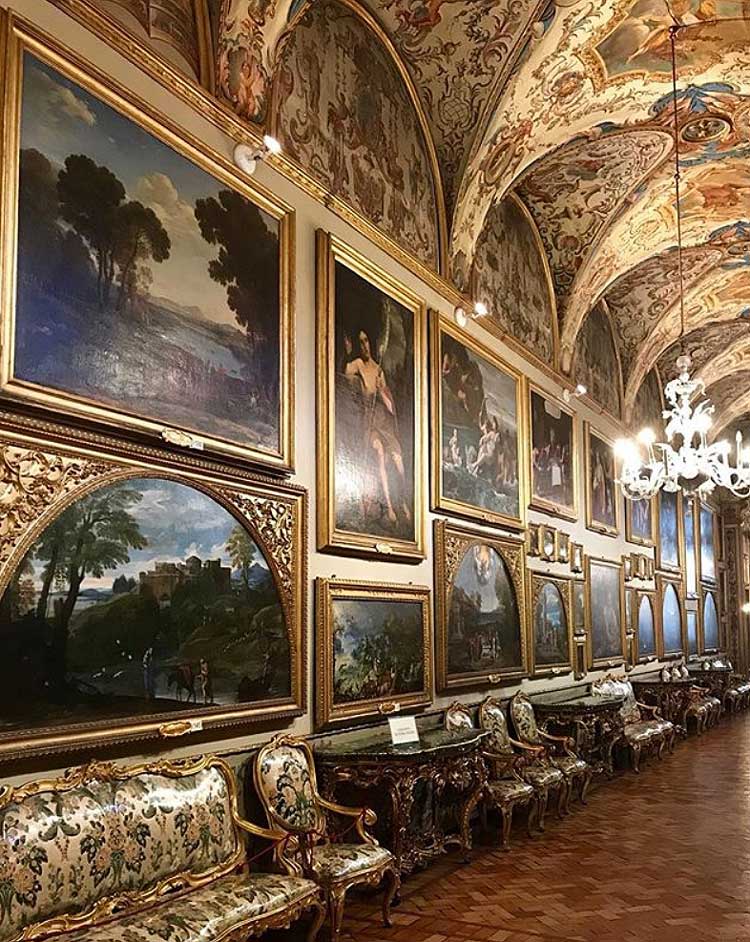 Among other paintings, represented mainly by landscape paintings, there are four canvases by the French painter Claude Lorrain (1600-1682), of which the most famous are The Wedding of Rebecca and The Procession to the Temple in Delphi, and the battle of Cupids in Guido Reni’s (1575-1642) masterpiece Lotta di putti. 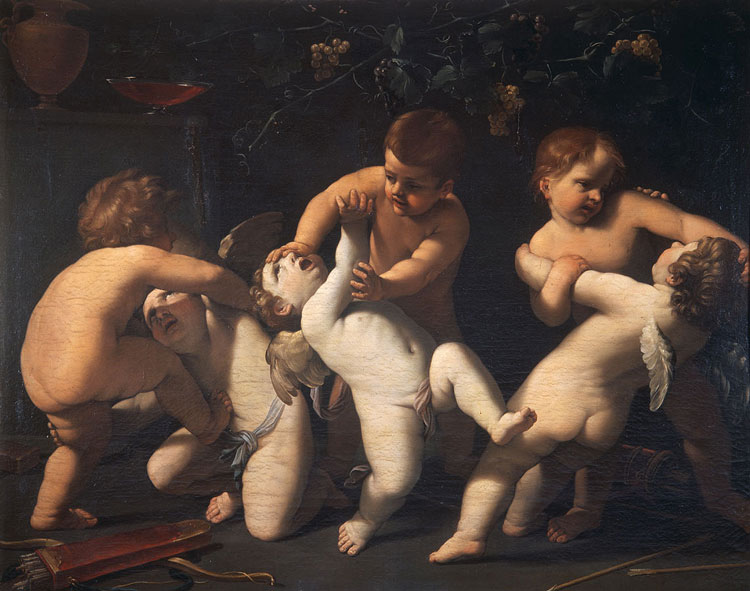 The especially cherished masterpieces, the portrait of Pope Innocent X Pamphili by Diego Velazquez in 1650 and the bust of the pontiff by Giovanni Lorenzo Bernini, are in a separate small room. The value of these works was so great for the family that in the middle of the 19th century Filippo Andreav Doria Pamphili wanted to isolate them from the others by placing them in the octagonal room specially reconstructed by Andrea Busiri Vici, which had previously been used as a dressing room. 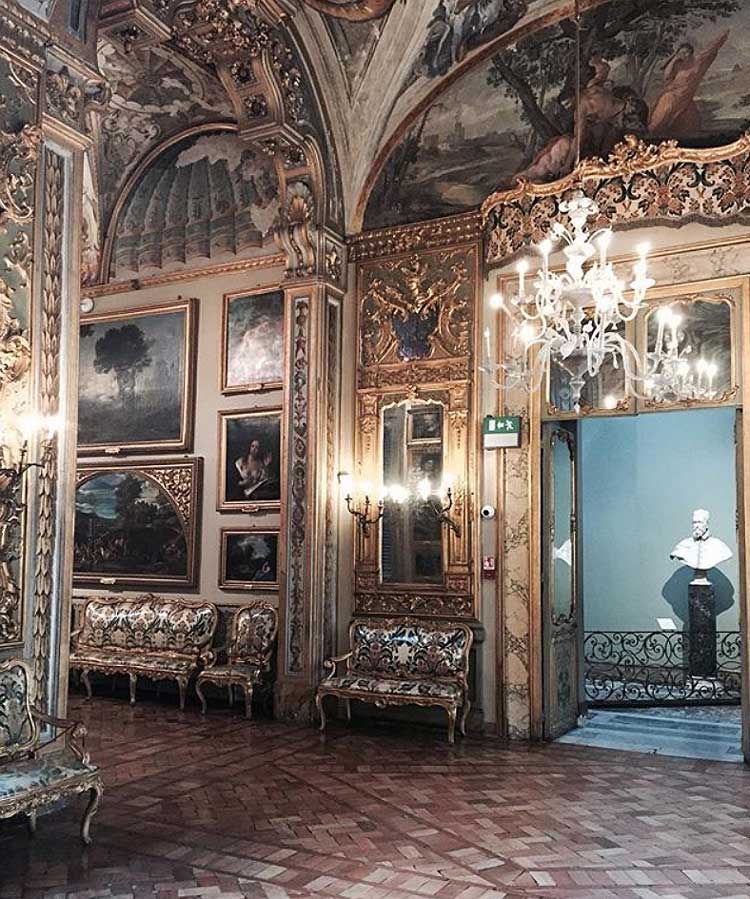 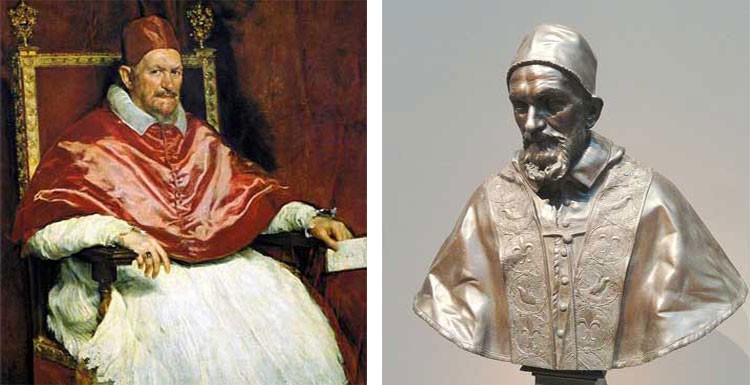 In the next two galleries, Doria and Pamphili, among the multitude of canvases that crown the walls of the rooms, we will find works of Correggio, Guido Reni, Parmigianino, a series of works by Jan Breughel and the famous bust of Olimpia Majdalcini, the sister-in-law of Pope Innocent X, sculpted by Alessandro Algardi between 1646 and 1647. The uniqueness of the museum exhibition also consists in the fact that the works of art are not presented to the public according to the schools and eras but according to their location according to the inventory made by the architect Francesco Andrea Nicoletti in 1768. In addition to the Doria Pamphili Gallery itself, several other rooms are open to visitors in the palace, which also houses part of the collection. In addition, on a pre-booked tour, you can visit the private apartments where descendants of the famous noble family still reside.