In the Dutch province of Gelderland, not far from Arnhem, in the floodplain of the Rhine River stands the famous Dorwert Castle.

In its long and rich life it has undergone many reconstructions and rebuildings, and has been home to many noble inhabitants, including a remarkable woman about whom a famous novel was written.

To get to know its first inhabitants, we have to go back to the Middle Ages, when the knight Berend van Dorenwerth built a castle on the banks of the Rhine in 1250. It was still very small, wooden and had only one tower. Ten years later, the knight’s conflict with a neighboring count resulted in the first Dorenwerth castle being burned, and van Dorenwerth himself being punished for terrorizing ships passing through the Rhine.

It was not until 1280 that Berend van Dorenwerth’s descendant rebuilt his predecessor’s castle, but made it more powerful, larger and more secure. From 1430 to 1677 the castle was repeatedly resold, and each subsequent owner rebuilt the castle, making it more and more solid and impregnable. Several towers were built, the walls were reinforced, and the inner rooms of the castle became more comfortable and richer with every reconstruction. However, one of the masters of Dorvert, Johann Vincenn van Obbendorf, did not calculate his strength and financial possibilities, so that in 1677 he was forced to sell his castle to the main creditor – Count Anton Oldenburg, a Danish nobleman, a representative of one of the most influential European noble houses.

The most famous resident of Dorvert Castle was Charlotte Sophia Oldenburg Bentinck (1715-1800). A descendant of Earl Anton, she was briefly the wife of Earl William Bentink, the owner of Dorvert.

She was an unusual woman for her time. Independent and impulsive, she would have gained fame as a feminist in modern times. She led an active public life, her novels were known throughout Europe, and she herself was a welcome guest at European royal courts. The great Voltaire, with whom she corresponded for a long time, came to meet her. She did not spend much time in the castle, being on constant travels, but she was considered its mistress until the end of her life. In 1978, the Dutch writer Hella Haas immortalized Charlotte Sophia’s name in her now-famous novel Madame Bentinck, which was reprinted several times and won the French prize for best foreign book.

READ
How to visit the Bavarian castle Hohenschwangau yourself

In 1837 the castle was bought by Baron van Braeckel, who modernized the Dorwerth and invested heavily in its modernization. The baron also sought to preserve the historic uniqueness of his new home. After his death, however, none of his nine children showed any interest in the castle, van Brakel’s family returned to their former possessions, and the castle began to decline.

At the end of the nineteenth century in the Netherlands, increasing attention was paid to the restoration of historic buildings, castles and palaces throughout the country. In Dorvert Castle archaeological work was carried out by the famous Dutch military, collector and history enthusiast F. Hofer, who insisted on the restoration of the castle. In 1910, he drew up a restoration plan, in which he was actively assisted by the famous architect Peter Kuipers.

Just before the outbreak of World War II, the rebuilding of Dorvert was almost complete. However, all the efforts were in vain. The castle was a few kilometers from the town of Arnhem, in the vicinity of which the heaviest battles were fought in 1944. German bombing and artillery fire of the Allies destroyed a large part of the almost reconstructed Dorvert. In 1956, reconstruction work began again, which lasted for 37 years.

In 1983 all the work was completed, three years later Princess Juliana of the Netherlands opened its doors to all comers. You can visit the castle as part of a tour group or on your own.

As with most castles in the Netherlands, the interior of Dorvert bears little resemblance to what it was centuries ago. What you can see today is the result of the painstaking work of historians, who purposely collected and restored the interior to give a more or less true picture of what the castle once looked like from the inside. Therefore, some rooms are in medieval style and some are furnished according to the realities of the 16th and 17th centuries.

READ
Caen Castle and the Palace of William the Conqueror

In the kitchen of the castle there is a large stove, an iron, a hot water tank and plenty of dishes. Special speakers broadcast the sounds of the kitchen, which give the impression that the servants are about to return and begin their daily duties.

The armory, arranged in seventeenth-century style, displays medieval armor. Thus within the walls of Dorvert the different eras penetrate into each other and interact, creating a unique atmosphere of the rich history of the place.

The castle is also home to a number of museums. “The Dutch Hunting Museum” consists of several rooms that tell the history of hunting in the Netherlands. You can see in it hunting equipment, stuffed animals, paintings depicting the process of hunting. And the Veluwezom museum consists of two small halls, in which hang small paintings by artists of the XIX century. They depict landscapes of Dutch nature: forests, fields and rivers.

Finally, Dorvert Castle, as an old castle, has a reputation as a “haunted house”. For a long time there have been talks about paranormal phenomena, ghosts and white female silhouettes around this place. In 2004, enthusiasts from Great Britain even “caught” one ghost on video.

However, if you visit Dorvert, you are more likely to be completely captured by the atmosphere of centuries-old history of this place, the atmosphere of distant antiquity, which breathes here every stone, and ghosts will not be able to capture your attention.

Castles of the Netherlands 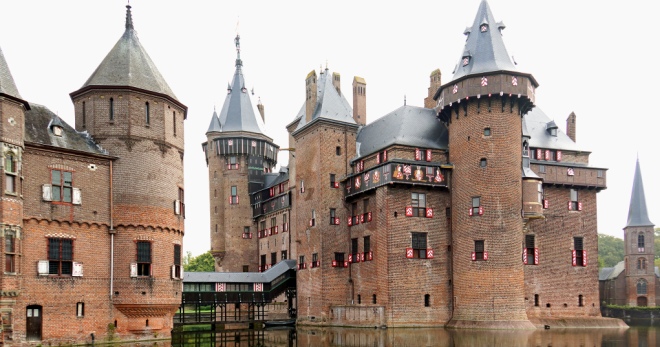 Among the hundreds of castles that have been built in the Netherlands over the past two millennia, many have survived to this day. Although a significant number of these impressive fortifications have remained in private hands, many are open to the public and welcome visitors throughout the year.

12 Spectacular Castles of the Netherlands

Uncover the history of Holland by exploring its architectural landmarks. There are about 700 examples in the Netherlands, reflecting both historic castles and luxurious palaces. Some are steeped in royal history, where one can trace the roots of the Dutch royal family and its connections to other royal houses. Many others, however, belonged to the nobility. Today, these castles and palaces are tourist attractions where visitors come to admire the architecture, art collections and gardens. Let’s continue with a list of the most impressive castles in the Netherlands:

The lighthouses of Holland vividly illustrate the “maritime” part of the country’s history. In former times, they played an important role in navigation, and even today many of them are used for their intended purpose. Some lighthouses have been turned into museums or hotels, and can be visited on guided tours.

Walking through the streets of Dutch cities, you can see a large number of monuments, monuments and sculptures. They are dedicated to different events and personalities and are always very interesting to tourists. Read about what monuments there are in the Netherlands.

The Netherlands has been and remains a major maritime power. This means that the country’s possessions are not limited to the mainland, but also extend to the islands located in the North Sea and the Caribbean. Let’s find out exactly which islands are part of the Kingdom of the Netherlands.

Holland is a place where zoos attract tourists with unique collections of animals and their diversity. In many Dutch cities you can visit farms and parks with wild animals – especially popular as a family vacation.