I always dreamed of getting to know closer the culture of India, its origins, folklore. So the first place I traveled to was Goa.

Among the coconut palms is one of the largest and most beautiful waterfalls in the world – Dudhsagar falls. It is the first place that is recommended to travelers and tourists in Goa. That’s where we went. We were interested in both the waterfall itself and the journey to it. On the way we met colorful Indian villages, rice fields, plantations of pineapples, bananas and spices. 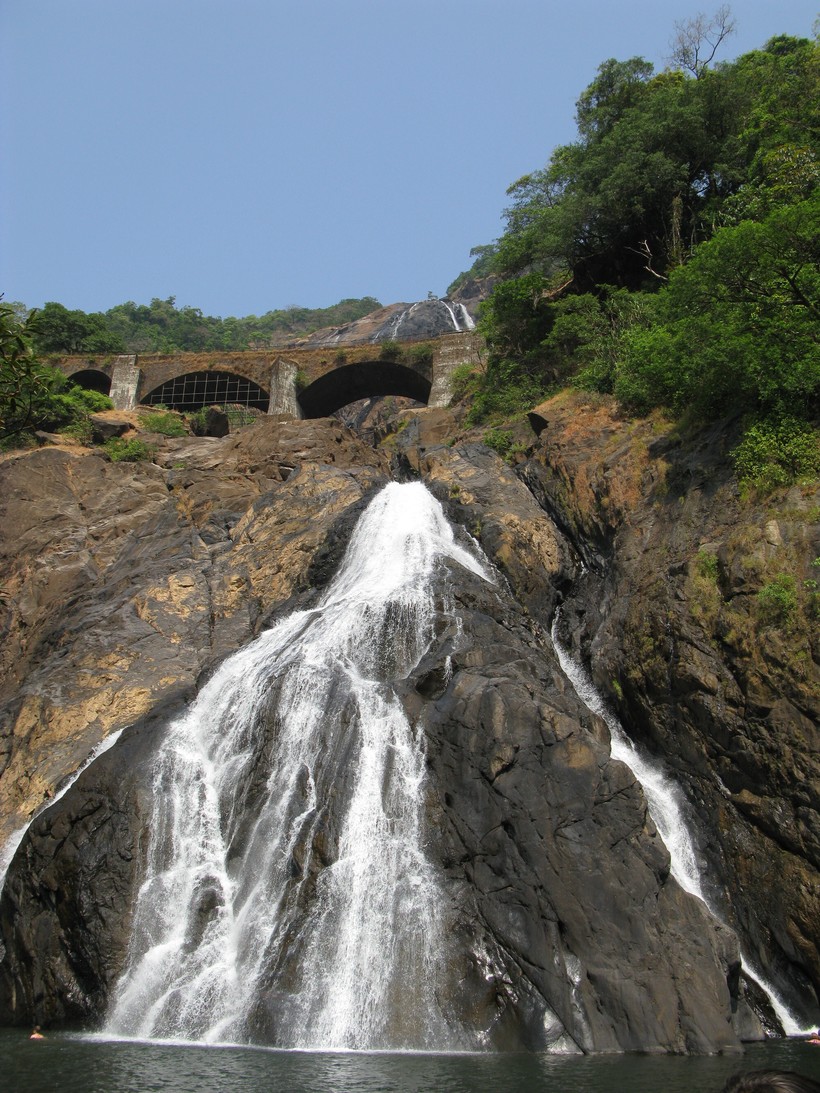 The name, difficult to pronounce, has a romantic translation from the Marathi language, “milky ocean”. Dudhsagar waterfall got its name because of the foamy white puffs of water flowing violently down the rocks. An old Indian legend has it that once there was a beautiful princess who loved to swim in the lake, hidden by the jungle. But one day she noticed a young man peeping at her. Then, blushing, she accidentally knocked over a jug of milk, whitening the clear waters. Since then, Dudhsagar has had a white milky color.

Dudhsagar Falls are located on the border of Karnataka state on the west side of the Ghats mountains. It is about 120 Km away from Arambol and 60 Km from Panaji, the capital of Goa.

So, how to reach Dudsgar: 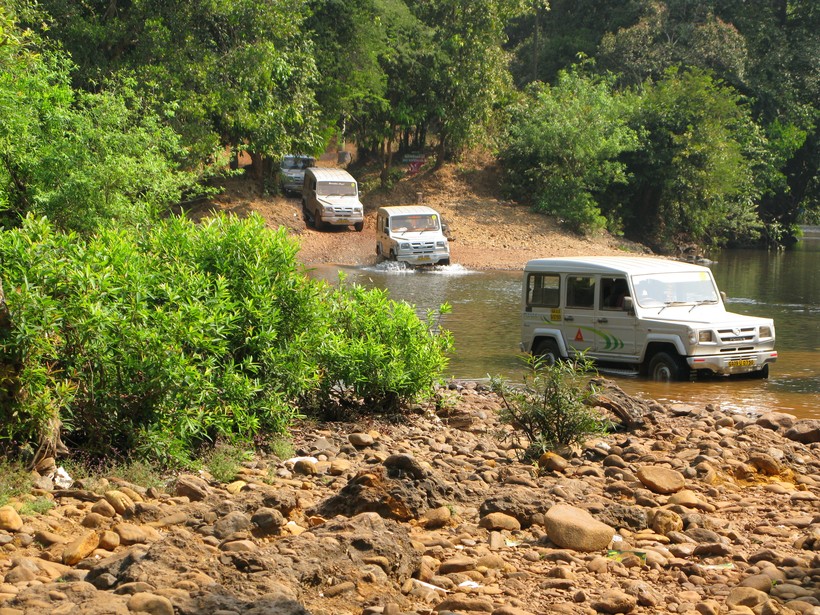 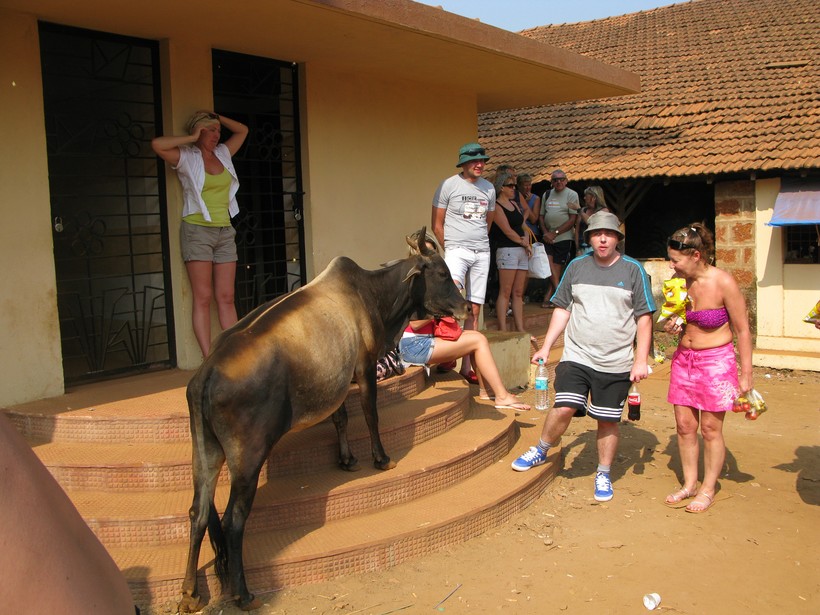 Whichever way you choose, your final destination will be Cole train station. It’s a very colorful place. Cows walk among the crowds of travelers and “holy” wandering elders giving blessings.

At Colem you must take a jeep. The way to the waterfall goes through the jungle and quite deep rivers, you can cross them only in such vehicles. Sometimes the water reaches door level! The trip is quite long, about an hour, but interesting and extreme. Keep in mind that in the back seat will be quite shaky. The jeep is rented together with the driver. The price of the trip is about 33 euros (2500 rupees), the number of seats – 6. It is 5,5 Euros (420 rupees) per person.

After one hour off-road safari there is a fifteen minute stony trail through the jungle to the bottom of the falls.

The road to the falls is through Goa’s largest wildlife sanctuary, the Bhagwan Mahavir Wildlife Sanctuary. 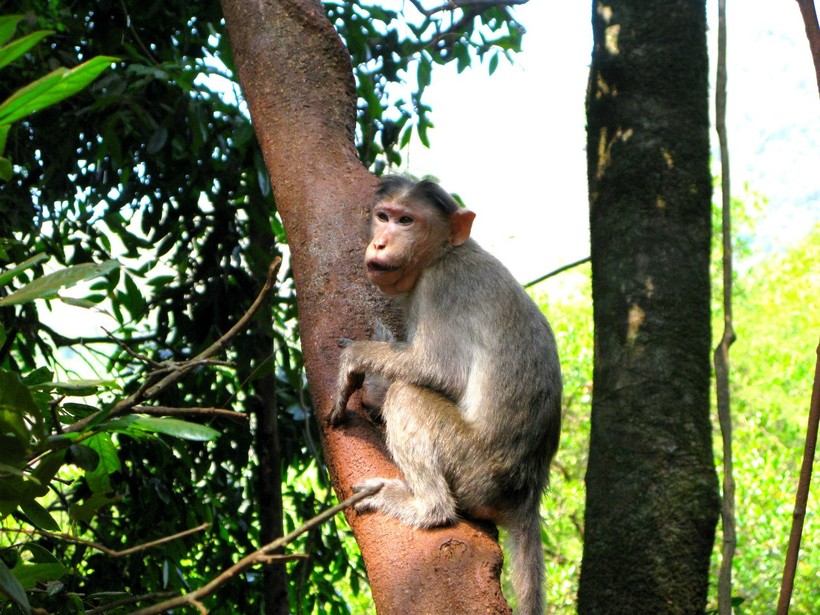 In it you can see wild animals, but only for this you need to come not for a sightseeing tour, but for a few days (you can stay in Molem). The reserve is home to elephants, leopards, deer and Indian bison gauras. It is also a paradise for those who like to watch birds – more than 200 species are found in Bhagwan Mahavir. Bring binoculars to get a better look at the feathered inhabitants of the reserve. We saw nothing but macaques in the trees :(. 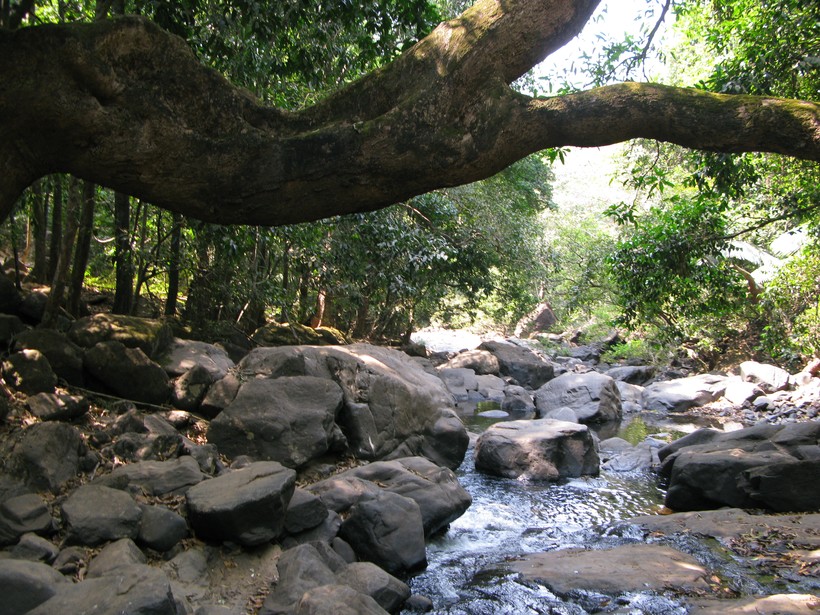 There is a lake at the foot of the waterfall. The water there is cold even in the hottest weather. But to cool off after a long trip is wonderful. 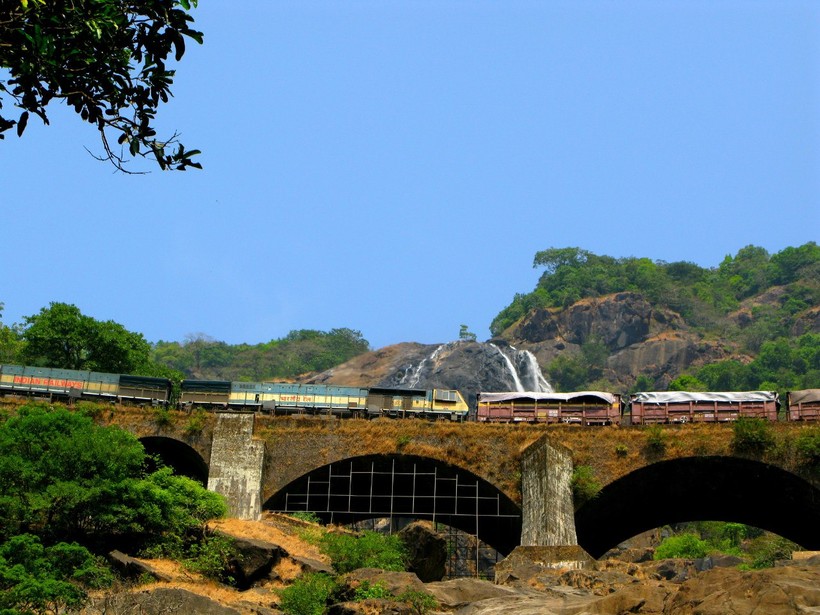 Overhanging over the waterfall is a railway bridge. It reminded me of the scenes from the Westerns, where the Indians seize the train. The bridge is just as old, with sun-blackened concrete and rust-red metalwork. It was built when India was a British colony, and trains still run on it!

If you wish, you can make arrangements with a jeep driver to visit a few other interesting places.

On the way back, see Devcharacho Canyon. 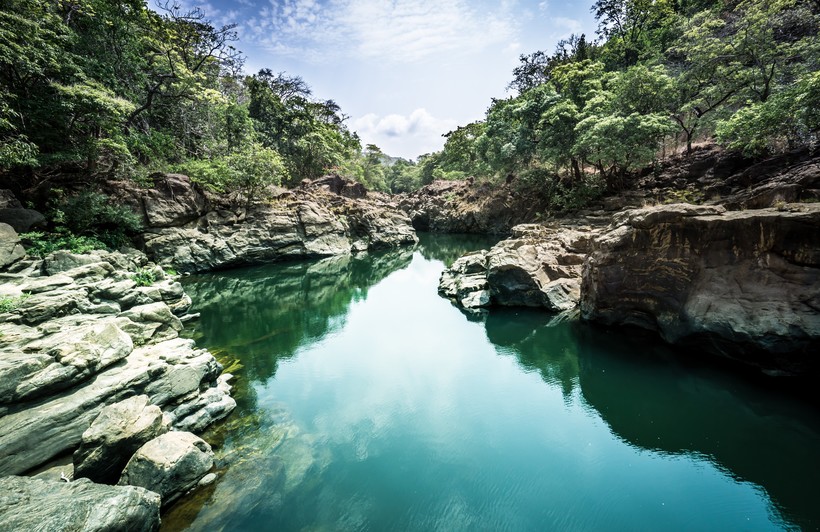 You will see a small canyon that is 50 meters deep. It is a very beautiful place! The unique rocky banks were formed by the current of the Candepar River. Locals say that it is simply bottomless in the hollows. It is dangerous to swim here because of this.

Farther inland of the reserve is the Mahadev Temple. It is believed to be the oldest temple in Goa. It was erected during the Yadav dynasty, around 1217. Due to the fact that the temple is hidden in the jungle, it has withstood the invasions of Muslims and colonizers. 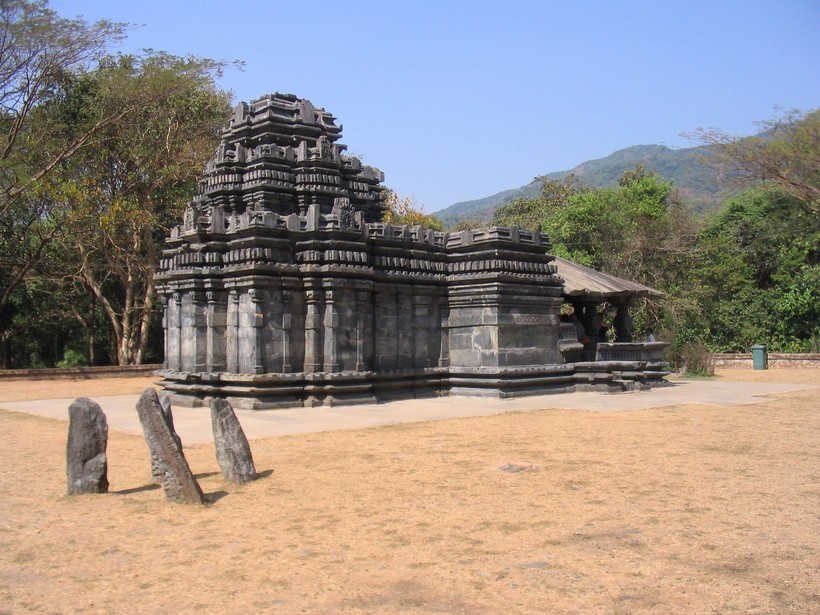 The interior contains images of elephants and flowers made of stone, as well as reliefs of Shiva, Vishnu, Brahma. There is a legend that in the temple hides a guardian – a huge royal cobra.

Dedicated to the god Shiva, there is also a lingam of Shiva – a symbol of divine power. Hindus believe that if you touch the lingam and make a wish, it will come true. Believe it or not, my friend’s deepest wish came true after visiting the temple.

The nearest cafe will only be in Colem at the jeep stop or in Molem. 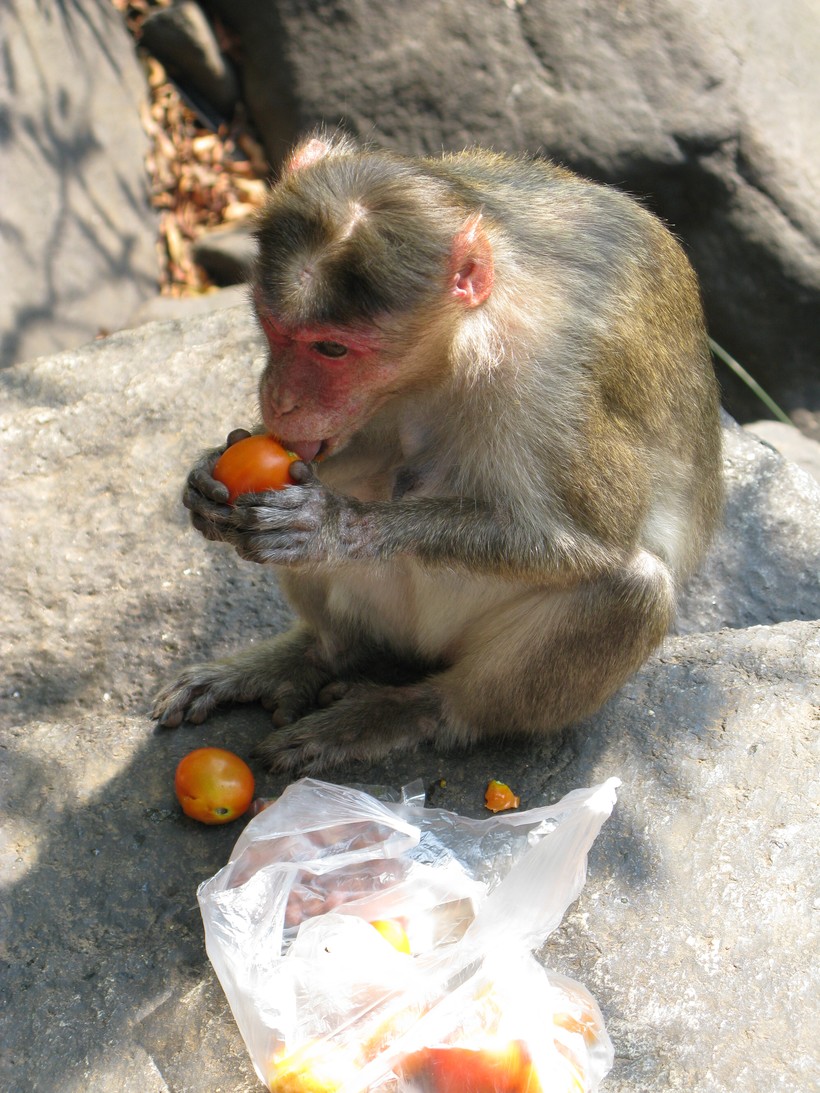 So it is better to stock up on sandwiches or chapati to go.

In all its glory

The waterfall becomes most majestic and full-flowing during the rainy season, but getting there during this time is problematic and almost impossible because of the washed-out road and weather conditions. A full-flowing river after heavy rains can simply cut off the road to the waterfall. In the spring, it is unbearably hot and humid. Therefore, it is better to go to Dudhsagar during the tourist season from November to February. We were in January and were pleased with what we saw. 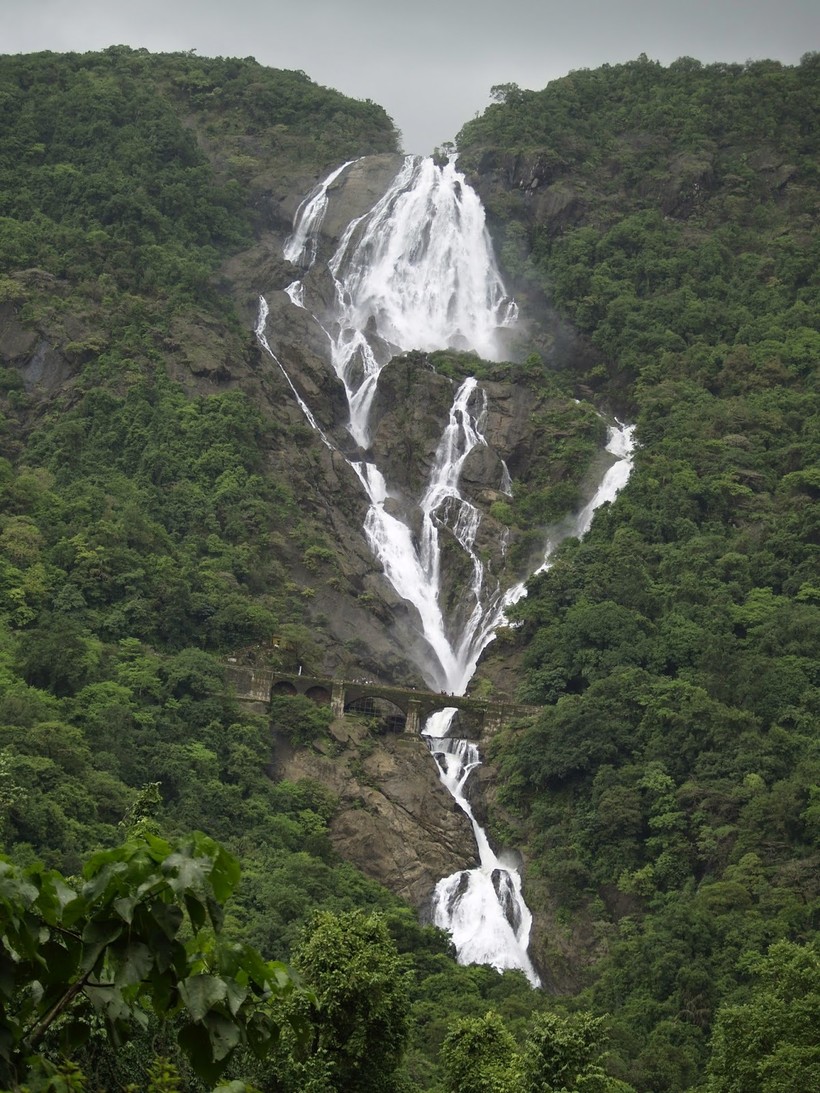 The locals say that by bathing under the waters of Dudhsagar, you can wash away all the sins. So in addition to the beautiful view and a brisk jeep safari, we also got a karma cleansing. 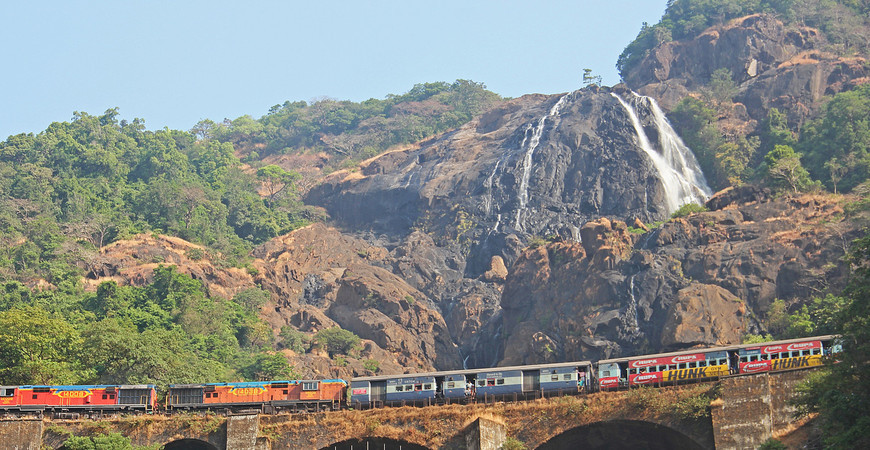 The famous raging Dudhsagar waterfall in Goa is located in the Mollem National Park, near the eastern border with Karnataka state, in the foothills of the Western Ghats.

The Dudhsagar Falls are 320 meters high.

It is one of the highest waterfalls in India, although it is still primarily impressive with its high water: it has four tiers of falling water, the average width of the streams is 30 meters. The total length of the waterfall with all the cascades is more than 600 meters.

The name Dudhsagar means “sea of milk”, based on the color of the constantly foaming water.

There is a beautiful legend about the Dudhsagar waterfall that explains its origin. In times immemorial, a princess loved to bathe in the local lake. She always took a jug of milk with her and one day, noticing that a prince was watching her, quickly poured the milk into the water to hide her nakedness. Since then, according to legend, white “milky” streams have flowed down the rocks.

During the dry season (October – May) the waterfall does not look too impressive, so it is advised to visit it in the comfortable off-season, when there is not so much precipitation.

Cost of a trip to Dudhsagar Falls

The visit to Bhagwan Mahavir Wildlife Sanctuary itself is free, with an environmental fee of 100 rupees paid only for the car. But the trip is not free – the price of delivery consists of two parts (if you get on your own, not with a tourist group): the road to the village of Kolem + transfer directly to the foot of the waterfall. Since it is forbidden to drive a private or rented vehicle in the national park, you will have to pay for a jeep transfer from local tour companies. Transfer prices start at 2500 rupees for the whole jeep – but there are usually a lot of willing passengers, so the amount is divided among all passengers (6-8 people).

Recently, the park service requires tourists to rent a life jacket (40 rupees). For photographing also have to pay – 30 rupees for each item of photo/video equipment.

The inhabitants of the Falls surroundings

The area around the falls is very picturesque, an area of dense deciduous forests with rich biodiversity. Wild cats (panthers and Bengal tigers), deer, mongoose, porcupines, Indian elephants, and several species of venomous snakes, including the king cobra, are listed in the Bhagwan Mahavir Reserve. But don’t expect to meet any of the above species. The animals have long known human trails and are scared off by the noise of tourist crowds and jeeps, so none of the tourists have yet seen wild cats in the vicinity.

The only animals you are guaranteed to meet are monkeys. They are used to treat tourists, despite the fact that there are signs posted around the waterfall, prohibiting feeding monkeys. In the waters of the lake below the waterfall there are large freshwater carp. At the entrance to the park offer rides on Indian elephants – not less than 700 rupees per ride.

Most tourists choose organized trips to the waterfall by tour companies. But even when traveling independently, you will have to seek the services of local tour companies.

The first point of an independent trip to the waterfalls is a stop in the village of Kolem. Here you can rent a jeep for yourself or join a company. Here we also recommend to stock up on water and snacks – there are no eating places further on, at the waterfalls. There is only overpriced stall with bananas and water.

After the village you will have not the most comfortable ride in a jeep on a dirt road through the jungle with several water crossings – 40-60 minutes depending on the driver (usually beginners drive slower, while experienced drivers know every bump in the reserve). The comfort of the trip also depends on the seat in the car – if there is a choice, sit in the front seat. The benches in the back will not leave a pleasant impression of the road.

After arriving at the waterfall, tourists are given an hour and a half to swim and take pictures. The waterfall is a 10-minute walk from the jeep parking area.

Regular excursions to Dudhsagar are made from most of the resorts in Goa. Moreover, this popular attraction is usually included in the program of large sightseeing tours of Goa, designed for an entire day. Additional locations on such itineraries may include: Old Goa, Elephant Farm, Sri Mangeshi Temple.

How to get to Dudhsagar Falls

The nearest passenger train station to the falls is Kulem. Please note: Dudhsagar rail stop is a technical station and there is no passenger train stop. The way from Kulem station to the waterfall (about 10 km) can be taken on foot or by touring jeeps. The park administration does not recommend walking through the forest on your own because of poisonous snakes.

Kulem is the nearest stop for tourists who get to the waterfall by bus. In most cases, the route will be composite – will include one to three transfers. For example, from Panaji (about 65 km) you can get to Mollem, where local buses take 15 minutes to Kulem station.

A cab ride to Dudhsagar Falls will cost at least 2,500 rupees. And the entry of private cars into the reserve is prohibited, so you still have to use the service of local jeep drivers.