Dune of Pyla: how to get there and what to do?

Far, far away on the edge of France, where in the evenings the sun falls into the waters of the Bay of Biscay, the ocean caresses the sandy beaches and coastal dunes of the Aquitaine region. The Silver Coast, or Côte d’Argent, is the name of the area south of the lagoon of Arcachon. And at the entrance to the lagoon opposite the tidal spit stands the largest sand dune in Europe, the great dune of Pyla (la Dune du Pilat). Some proudly call it the French desert, while others call it the most beautiful sand dune.

The history of the Dune du Pilat

The oldest layers of the Dune du Pilat were formed about 4,000 years ago. For many years, humans and coastal sand lived in harmony with each other, until in the 18th century, under the influence of stormy winds, the dunes and quicksand rushed on the offensive against human settlements. The matter turned out to be so serious that it took an edict from Napoleon ordering residents to plant pine forests to protect the area from the sand.

In the twentieth and twenty-first centuries, the dune again encroached on the forest, filling it with sand a few meters each year. Newspaper reports in 1936 tell of how it completely swallowed up a house carelessly built by a Bordeaux resident at the foot. Meanwhile, on the other side, water is gradually washing sand into the ocean. Who will win in this battle – the water, the sand or the wind – is still unclear.

They say you can’t step into the same river twice. Likewise, you can’t see Peel Dune the same way: it’s always different. Its height rises and falls, depending on the strength of the west wind from the ocean, and its color varies from almost white to golden.

If you try to describe Peel’s Dune in numbers, which are also constantly changing, you get this boring protocol:

Images from space show that the dune fits rather precisely into an elongated rectangle along the Atlantic Ocean.

People usually come to Peel’s Dune to admire the magnificent 360-degree view, take pictures of the surrounding area and interesting weather phenomena, take a boat trip to the islands, fly a kite, and even fly a paraglider. Some tips for tourists:

It is most convenient to schedule a visit to the dune at the beginning of summer or autumn: at this time the flow of tourists is not so active, and the weather is very comfortable for active walks. In winter, the dune can delight you with an unusual picture – there is often snow on the sandy slopes.

On the side of the road from April to November on a steep slope put a wooden ladder, so climb to the top quickly and comfortably.

Tourists usually take off their shoes and walk around the dune barefoot because no closed shoes will not save you from the fine pervasive sand.

Do not be limited to just climbing and panoramic view of the surroundings. Walk along the sandy ridge and down the gentle slope to the beach.

The area around Peel Dune often serves as a natural backdrop for film productions. Since 2005, the film “Camping” and its sequels have been filmed here periodically.

How to get there from Bordeaux?

If you decide to visit Bordeaux, be sure to get to the little French desert, only 60 km from the capital of Aquitaine.

You can use public transport – the train, which leaves every half hour from the station Saint-Jean to the town of Arcachon. The cost of an adult ticket – 12 €, the duration of the trip – 52-53 minutes. Then take local bus #1 Baïa to the Dune du Pilat stop.

You can book a car transfer from Bordeaux to Arcachon here.

In the commune of La Test de Buche (10 minutes walk to the dune) is the Coquet duplex apartment.

The most authentic sand desert can be found in France. It is the famous dune of Pyla. Millions of tons of golden sand, as if by magic, were transferred here from the Sahara. 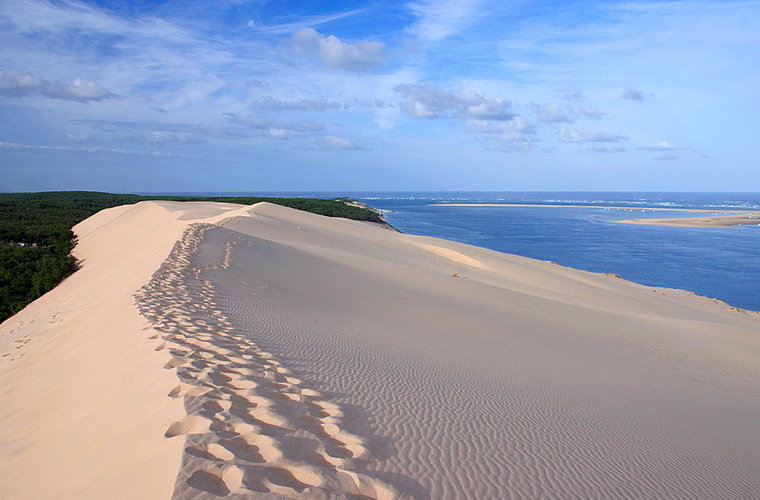 Dune Pila is the highest dune in Europe. Its highest point is at a level of 130 meters. But this value is not constant, it is affected by strong winds, periodically correcting it in one or another direction. 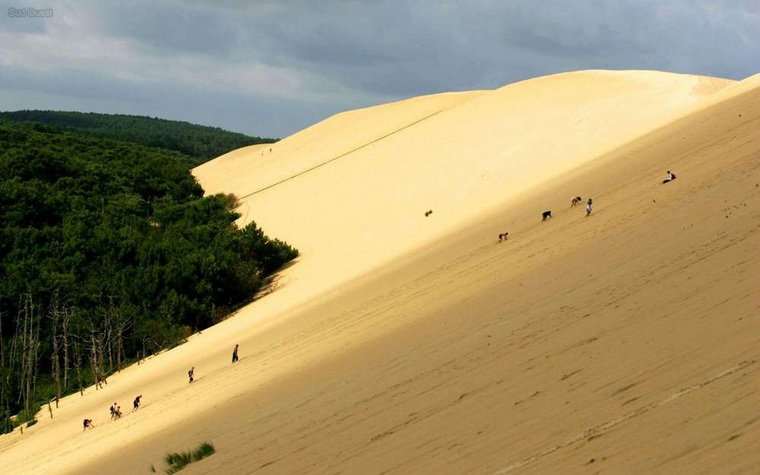 The sandy strip has a fairly regular rectangular shape. The width of the dune reaches 600 meters and is almost 3 kilometers long. The volume of sand is estimated at about 60 million cubic meters.

By the way, a similar sand phenomenon can be observed in Japan. There is about the same desert called Tottori

Where is Pila Dune

The French desert is located near the town of La Teste de Buch in the southwestern part of the country, right on the coast of the Atlantic Ocean. 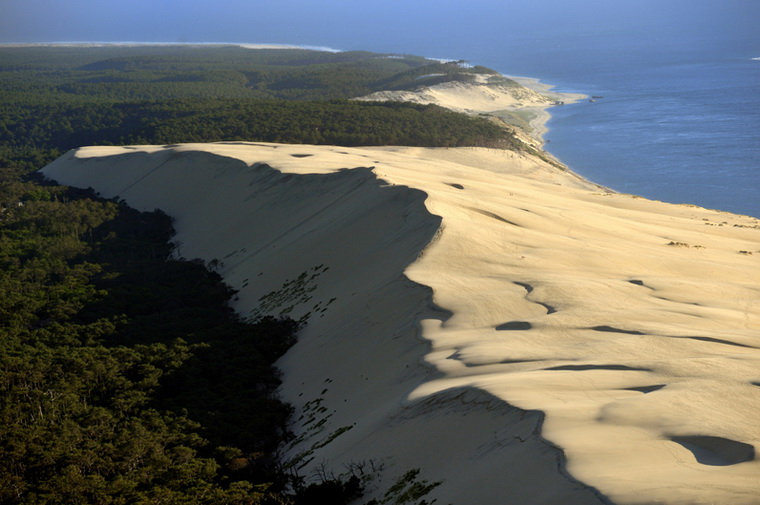 This region is known as New Aquitaine, and the area in which the dune is directly located is called the Gironde. The nearest major city of Bordeaux is 60 kilometers to the northeast. Dune de Pyla is located right at the entrance to the Bay of Arcachon.

If you don’t know you’re in France, you might think you’re in Namibia and its endless Skeleton Coast.

Features of the Peel Dune

The formation of the dune.

Because of its geographic location, the area is dominated by westerly winds that carry sand from the coast. This explains the shape of the dune. On the ocean side it has a gentle slope, but on the opposite side it is quite steep. That is why the ascent to the sand mountain on the east side is very difficult.

Because of the influx of tourists, here in the summer period are installed ladders. Climbing with their help to the top of the hill, you have an impressive view – in the west the Atlantic Ocean, in the east the pine forests, and when the weather is clear, in the south you can see the Pyrenees Mountains on the border with Spain. 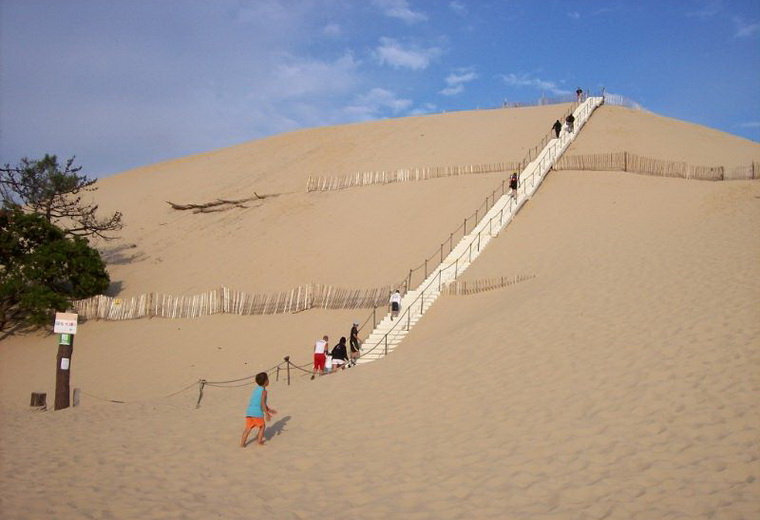 The movement of the dunes.

Driven by the winds, the sand of the dune moves steadily inland, slowly consuming the forest and covering houses and roads. The speed of movement is variable. Sometimes it is as much as 10 meters per year, and sometimes less than one meter per year. Over the past 57 years, the dune has moved about 280 meters. So its speed is 4.9 meters per year. 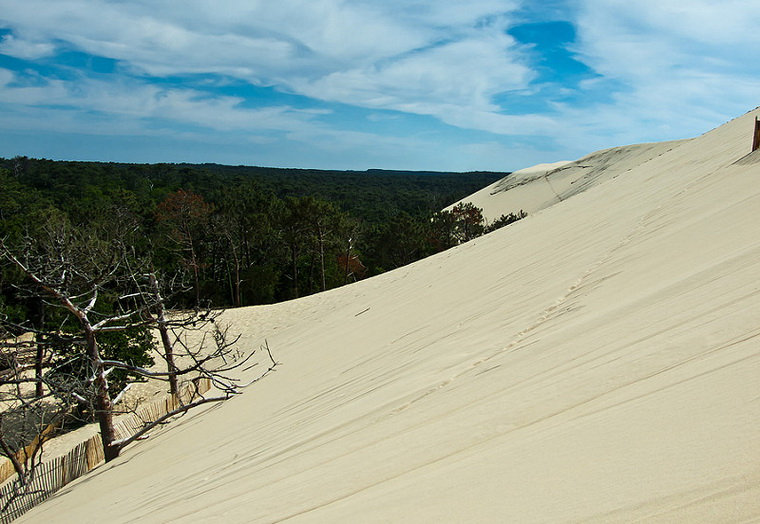 Victims of the Sawtooth Dune.

Sand islands at the Peel dune

Just 1 kilometer west of the dune, in the waters of the Atlantic, is the sandy island Banc d’Arguin. It has similar dimensions (4.5 km by 700 meters) and stretches almost parallel to the dune. But behind this island (and again about 1 km to the west) there is another island Banc du Toulinguet. It is much more modest in size (about 700 by 400 meters). Both islands are very popular with travelers. There are always a lot of boats, boats and tourists. 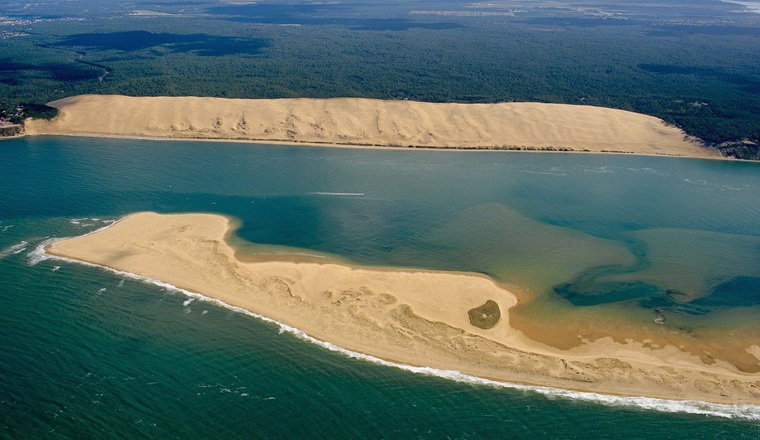 Many names for one dune

It is common outside of France to use the name Dune du Pyla, but few people know that the official (and thus correct) name of the landmark is Dune du Pilat (Dune Pilat). At least that is the name used in all official French documents. It is derived from the Gascon word “pilhat”, which means “heap” or “mound”.

The seaside resort of Pyla sur Mer, founded in 1920 and part of La Teste de Buch, stretches north of the dune. The first part of its name is what led to the name confusion. Despite the official name of the dune, signposts on the roads are found with different names. Most importantly, don’t be confused or worried, they all lead to the same place.