Yelagin Island Palace is situated on Yelagin Island in St Petersburg. This island in the 18th century belonged to the rich nobleman Ivan Yelagin, in whose honour it was named and after whom it was never renamed. In those years the Empress Catherine II liked to visit it, and arranged hunts and fireworks for her. In the 1780s a palace was built for Elagin on the island.

Save on your journey!

In the early 19th century, Emperor Alexander I purchased Yelagin Island for his mother Maria Feodorovna’s summer residence and commissioned the famous architect Carlo Rossi to rebuild the Yelagin Palace. Thus one of the best palaces and park ensembles appeared in St. Petersburg. It includes the palace itself, its Kitchen, Orangery and Stables, a pavilion under the flag with a granite pier, and a music pavilion. All this splendor is located on the north-eastern tip of Yelagin Island.

Two-story building of the palace, topped with a dome, stands on a high stone terrace. One of its facades faces the river, and from the other side a broad multistage staircase descends into the park, guarded by cast-iron lions. In front of the palace there is the Big Butter meadow, from where, if you wish, you can walk along the Big alley to the western turn of Elagin island, where in the 19th century it was fashionable to go for a walk during the white nights.

The interiors of the Yelagin Island Palace are distinguished by exquisite decoration and original finishings. Well-known sculptors Pimenov and Demut-Malinovsky, as well as artists Scotti, Vigi and Medici took part in its decoration. In the state rooms of the first floor there were over twenty magnificent doors, faced with precious sorts of wood and decorated with fine gilt carving. Each such door was perceived as a work of art in its own right. In general, the most richly decorated rooms are on the first floor. In the lobby in niches there were figures of vestalas holding lamps in their hands and the ceiling was decorated with paintings. The dining-room, the Oval Room, the study, the bedroom, and the dressing-room were of still greater splendor. The walls and columns of these rooms were faced with artificial marble. In the Oval Room and study this marble was very white and shiny, like the best porcelain, and because of this the study was called Porcelain. The rooms on the second and third floors of the palace were much more modest and simpler decorated than the state rooms. Exceptions were the study of Alexander I on the second floor and the Church Hall on the third.

READ
Livadia Palace in Crimea, history and how to get there

After Maria Fiodorovna’s death the Yelagin palace gradually lost its status. At first it became the tsar’s reserve residence, and then the resting place of the Russian prime ministers. The palace was badly damaged during the Great Patriotic War but it was restored and opened as a museum in 1987.

Elaginoostrov Palace-Museum of Russian Decorative and Applied Art and Interiors of the 18th-20th Centuries.

The museum occupies three buildings of the palace and park ensemble on Yelagin Island – the Palace, the Greenhouse, and the Stables. In its funds – more than 12 thousand art objects. These are paintings, sculpture, porcelain, glass, furniture, fabrics and embroidery. In the palace the interiors are preserved; the most beautiful are the Oval Hall with semi-columns and caryatids, the Blue Drawing Room with a fireplace of black marble, the Porcelain Study, and the Crimson Drawing Room. The grand enfilade of halls is on the first floor.

On the second floor are exhibitions of arts and crafts and antique interior items, while on the third floor work is underway to recreate the palace church.

In 2010 a new museum subdivision, the Museum of Art Glass, was opened in the Orangery Building of the palace. The 700 square meter restored exhibition space is filled with more than 700 glass and crystal items – a unique collection of works from the Leningrad Art Glass Factory, which was the leading glass factory of the USSR in its day, and was closed in 1996. The exhibition occupies three halls with the latest museum equipment: Central, Black and White (the latter is used for temporary exhibitions). Conferences, presentations and master classes on glass painting are held in the museum. In the Stable Building are exhibition halls, which hold exhibitions of works by contemporary artists. 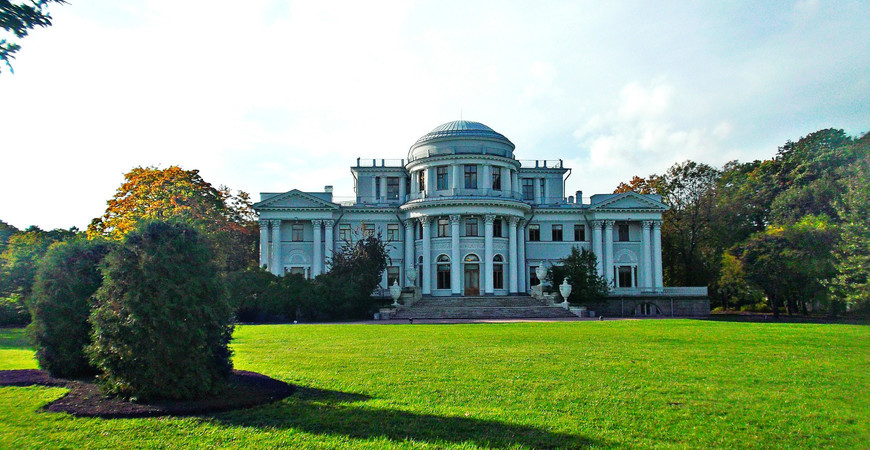 One of the best monuments of the Empire period in Russia, Elagin palace, the architectural pearl of the palace and park ensemble on Elagin island in St. Petersburg.

In addition to the imperial residence, the complex includes the Kitchen, the Stables, the Fräulein, the Cavalry, the Orangery, the Gardener’s House of Peter Buk, pavilions and park compositions. All of them are part of the Kirov Central Park of Culture and Leisure – the favorite park of many St. Petersburg residents. Throughout the year in the buildings of the ensemble are cultural events: concerts, creative master classes, sporting events, etc.

Elagin palace – the brainchild of the famous architect Carlo Rossi, not only survived to this day in its original form, but also retained its original name. The palace and the island bear the name of the statesman, historian and poet Ivan Elagin Perfilievich, who owned the villa and the island at the end of the XVIII century. In addition to the historical name the names Elaginoostrovsky and Elaginsky Palace are also used.

In April 2021 after a long restoration Elagin palace again opened its doors. Citizens and tourists are waiting here for interesting excursions with a visit to the cabinet of Alexander I and the state enfilade with restored interiors, art exhibitions.

History of the palace on Elagin island, architect

Today we can see Elagin palace as it was after the purchase of the island by Alexander I and the global reconstruction of the villa of I. P. Elagin. The Russian emperor decided to purchase Mishin Island (the official name of the territory at the time) after his mother Maria Feodorovna found it difficult to visit her country residences. The palace was conceived precisely as a resting place for the Empress, which was strongly reflected in its decor. Lavish halls decorated by the best sculptors and artists of the time, walls faced with marble, carved doors of precious wood with gilding, bronze ornaments, and expensive furniture-all these were to emphasize the high status of the residents.

Maria Fyodorovna loved the Yelagin palace, but after her death the palace was not in favor with her heirs and they visited it very rarely. Later high-ranking Russian officials started to rest in the main house.

The palace and park complex survived after the revolution, and almost immediately it was recognized as a monument of architecture and opened in the Elagin palace Museum of History and Life. The exhibitions were filled with exhibits from nationalized summer houses and were functioning till 1929; after that the museum was disbanded and an institution for cultural and educational work was created in the Palace. A couple of years later, the Central Park of Culture and Recreation was opened on Yelagin Island.

In the first year of World War II the palace and the park were badly damaged by bombing. A shell that hit the building caused a huge fire, destroying all the interiors and part of the ceilings. Immediately after the victory, restoration work began based on the drawings and paintings by C. Rossi, which had survived in the archives. Thanks to these documents the team of talented architects managed to recreate the historic look of the building, and in 1960 the Yelagin Palace housed exhibitions of articles of decorative and applied arts, which are available to this day.

The chief architect was invited architect Carlo Rossi, who enjoyed the patronage of the emperors. The construction of the Yelagin Palace was the most important stage in his career for Rossi. After he managed to create a magnificent architectural ensemble from the old villa, surrounded by a landscape park, he began to be entrusted with the most important projects.

It should be noted that the construction of the Elagin House in the early classicist style, which became the basis for the Elagin Palace, is sometimes attributed to another, no less famous architect, Giacomo Quarenghi. Although it is not known for certain whether the author of the Narva Gate had a hand in creating the house for Elagin.

Carlo Rossi kept the foundation and the “box” of the old Elagin mansion, but added an extra third floor and a dome. The facades were drastically changed: the architect used Corinthian orders, porticoes, and luxurious staircases for decoration. The staircase on the western side of the palace is especially beautiful: it is guarded by sculptures of lions.

Western staircase on the panorama:

During the latest restoration, the masters restored Alexander I’s study on the second floor with a fireplace and paintings, the interiors of the house church and several other rooms. All of them are now available for viewing.

The first exhibition introduces the activities of Karl Rossi and the palace’s artistic decoration. You will walk through the entrance hall and the state rooms, visit the Oval Hall, the Crimson and Blue Drawing Rooms, the Porcelain Study, and see the impressive doors from the studio of F. Grosse, which earned the residence its nickname “the palace of doors”.

The second exhibition is devoted to residential interiors of the first quarter of the 19th and early 20th centuries. Here one can see decorative woodwork and a collection of furniture.

There is no transport going along Yelagin Island, you can get to the park by one of the three bridges.

The 1st bridge across the Middle Neva connects the island with the Krestovka embankment and allows you to get to the Palace from the Kamennoostrovsky theater. This is not the shortest way if you take public transportation. The nearest bus stop – “Kamenny Ostrov” where the buses number 1, 25, 46, the route K-127, K-690, K-76 and the trolleybus number 34 run, you will have to walk about an hour. If you are a car owner, you may shorten the distance by leaving the car near the Kamennoostrovskii Theatre.

If you go on foot from the metro station “Staraya Derevnya” (Purple Line/M5), you can reduce the walking time to 30 minutes. From the entrance hall, take Lipovaya Alley and go in the direction of Bolshaya Nevka and Primorsky Prospekt. Just behind Datsan Gunzechoin you will see the 2nd Yelagin Bridge, and from there you will follow the signs to the Palace.

Moving along the purple metro line you can get out at the station “Krestovsky Island” and then go to the place of interest. The walk will take about 20 minutes.

See here a map of the park with the location of all objects, and all ways to get to Elagin island.

If you want to get as close as possible to Yelagin’s bridges, cab service Yandex. Go, Uber, Taxovichkof, Concord, Gett, Maxim.