Water is not only a source of life, but also a beautiful sight. Especially in the form of a waterfall. In particular let’s focus on Multnomah Falls in the U.S. state of Oregon. It is tucked away in the mysterious and beautiful Columbia River Gorge, but attracts millions of travelers every year.

Where is the Falls

Multnomah is located next to the Columbia River on its left bank, almost on the border of Washington and Oregon in the northwestern United States. The falls are located 30 miles east of Portland between the towns of Corbett (west) and Dodson (east).

Multnomah is a two-cascade waterfall. Its total height is 189 meters. Of these, the first cascade is as much as 165 meters, and the second is only 21 meters. Plus the 3-meter difference in height between the cascades.

The waterfall is fed by underground water sources of Larch Mountain. This permanent source for the waterfall, is supplemented in the spring by meltwater from the mountains and rainfall forming Multnomah Creek.

Multnomah is recognized as the tallest waterfall in Oregon and the second tallest permanent non-freezing waterfall in the United States. Some sources indicate that Multnomah is the fourth highest waterfall in the country. We won’t go into the intricacies of calculating the height and determining the ranking. For us (and hopefully for you) the main thing about this place is the allure of nature.

The gorge, into which the water falls, reminiscent of the setting for a movie in the fantasy genre. It seems that behind the slopes of the mountain is sure to find a hobbit village. 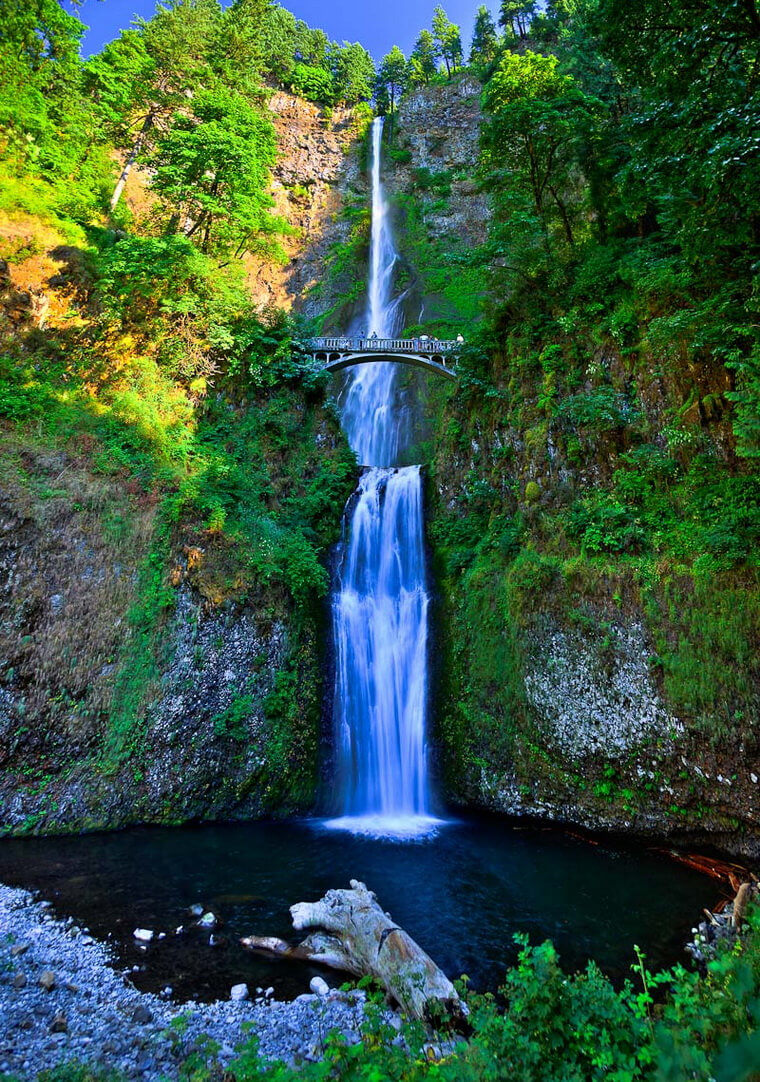 The Legend of Multnomah Falls

According to scientists, the falls were formed about 15,000 years ago by the Missoula Flood, a catastrophic flood at the end of the last Ice Age. But the Indians have their own version of its origins.

Local legends all boil down to one thing: In ancient times, the Maltnoma Indians lived near the gorge. One day in the village broke out in a terrible plague epidemic, people were very sick and dying. Save the people volunteered one girl. As is fitting in the legends – young, clever and beautiful. It was said that she was the youngest daughter of the chief of the tribe. To placate the spirits, the girl sacrificed herself by jumping to the bottom of the ravine. Strange as it may seem, it worked and people stopped getting sick. The epidemic broke out and a waterfall formed on the cliff from which the girl jumped.

To this day, the waterfall is a reminder of death in the name of life.

Explorers William Clark and Meriwether Lewis were the first Europeans to discover the falls during an expedition in 1805.

The land around the falls was owned by Simon Benson in the early 20th century. He helped build hiking trails at the falls, observation decks, and an interesting stone bridge to replace the old wooden bridge.

Shortly before his death in 1915, Benson donated more than 570 acres of land to the city of Portland. This land included most of the local waterfalls and Multnomah among them. And in 1943, this land was transferred to the United States Forest Service Agency.

The arch-shaped bridge is located between the cascades of the falls at a height of 32 meters from the bottom of the falls. It is 15 meters long.

Simon Benson financed the construction of this bridge and invited Italian engineers to build it. Naturally, over time, the bridge was named after Benson. The bridge offers unique views of the upper cascade of the waterfall. 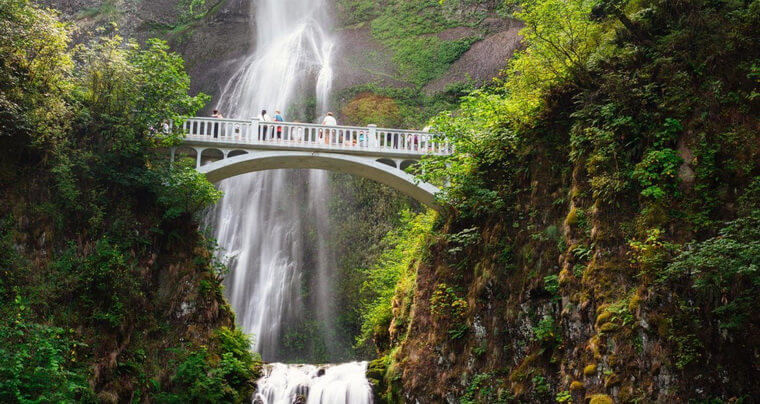 The Falls attract over 2 million tourists every year. There are walking paths in its vicinity. They lead to the Benson Bridge, then climb to a height of 30 meters above the waterfall. Then they descend to an observation deck on the edge of the falls, giving hikers a bird’s-eye view of the Columbia River Gorge. The so-called “Little Multnomah” can also be seen from here. It is a small cascade of waterfalls just upstream. 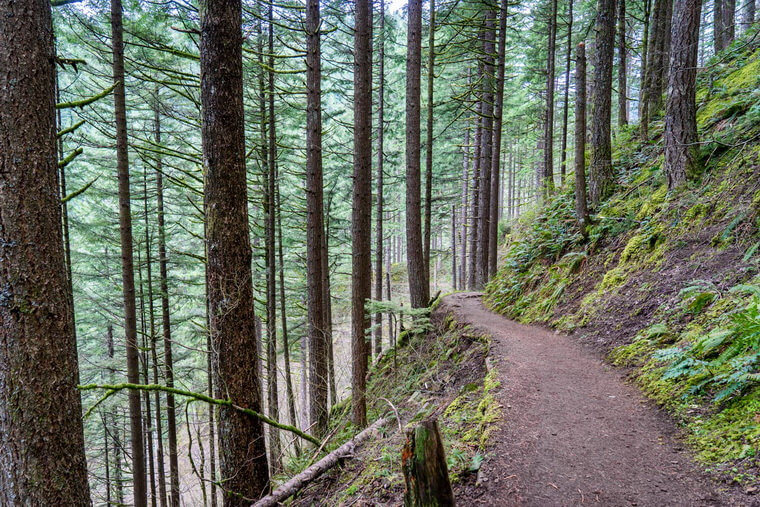 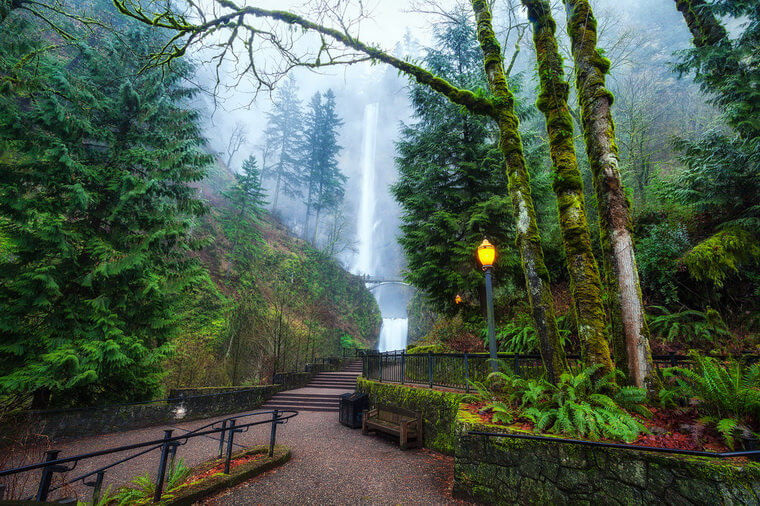 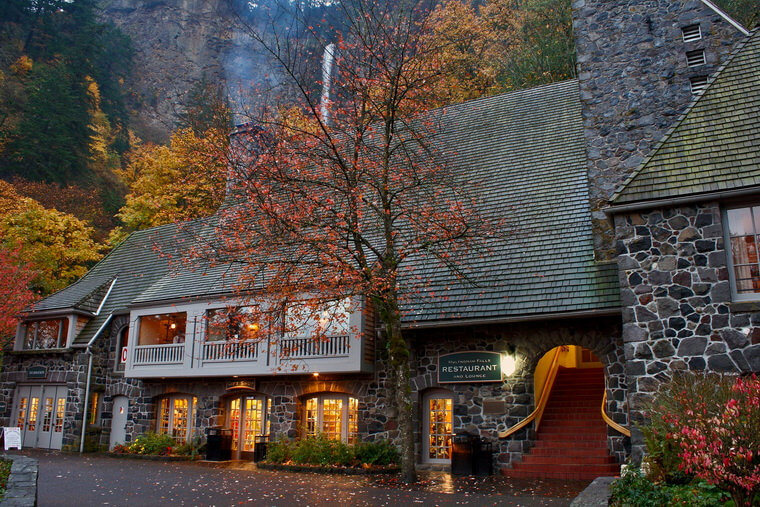 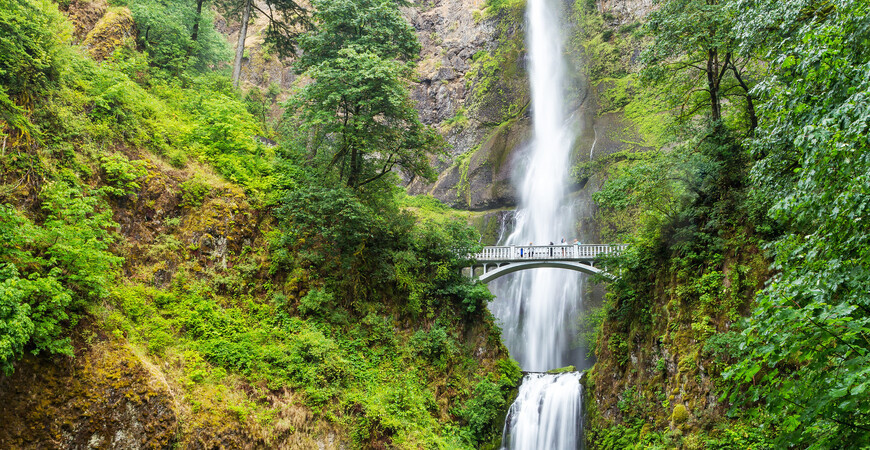 Multnomah Falls in Oregon is a popular tourist attraction in the Columbia River Canyon, 30-37 miles from Portland.

Multnomah Falls is the highest natural waterfall in the state: the upper level of the waterfall is about 165 m, the lower level (second cascade) is 21 m. Fueled by groundwater and precipitation, it does not dry up in summer and does not freeze with the onset of cold weather.

Above the Lower Cascade is a long pedestrian bridge, built in 1914, named after Simon Benson, who owned the area in the early 20th century. In 1915. Benson deeded the land to Portland authorities.

The hiking trail to the falls is no more than 3 miles long. There is a historic 1925 stone cabin on the trail where you can pick up a map.

Multnomah ranks at the top of tourist rankings:

Multnomah is beautiful at any time of the year. In the spring, thanks to the melting of the snows, you can see the maximum fullness. In addition, wildflowers around the trails look very beautiful. In summer there are always lots of people, so to find a parking spot and enjoy the scenery, arrive as early in the morning as possible. In the fall on weekdays, you can stroll along the trails without even seeing much of anyone. The maples, whose foliage turns bright red and yellow, are an eye-catcher. During this season, there is minimal water flow in the waterfall. You can’t always get here in the winter because of the weather, but if you can, you’ll see snow-capped mountains and a living stream of water – it’s very beautiful.

You can admire the waterfall from different vantage points. We recommend visiting them all. The first observation point is at the foot of the waterfall. There is the Multnomah Falls Lodge restaurant with a banquet hall and a panoramic view from its terrace. There is a small snack bar, stores with souvenirs, an information center.

From the lower landing start hiking routes through the picturesque surroundings. Free maps and advice are available from the Forest Service and Friends of Multnomah Falls. In 2017, there was a major fire in the region, so some of the hiking trails were closed. Today they are gradually being reopened, but may limit hikers’ movements due to bad weather. Keep in mind that hiking is not safe in rainy weather, as the rocks become slippery.

From the lower platform, the hiker can walk up the wide manicured walkway to the Benson Lookout Bridge to see the streams of water up close. It is on the level between the lower and upper cascades. The path is safe for children, there are guardrails. From the bridge, not only can you get a good view of the waterfall, but also the road, the lower deck, and the parking lot.

It will take some effort to reach the upper observation deck. From the observation bridge, the trail is narrow and quite steep, though also paved. But you’ll get incredible bird’s-eye views of the Columbia River Gorge. You can walk to the spot where the river drops off a cliff to look down. You can also walk further upstream if you have comfortable shoes and the proper physical fitness. There are trails along the area that will lead you to other waterfalls, such as “Little Multnomah.”

Explorers made the first maps of the region in the very early 19th century. In 1804, the Lewis and Clark Expedition set out. They came back only 2.5 years later, when their home country had already declared them dead. The result of the trip – overcoming 7 thousand kilometers and the first record of the majestic waterfall Multnomah. Exactly who gave such a name to the miracle of nature is not known, but in the geographical reference books of the area in 1860, it was recorded.

In the early twentieth century, the area and the waterfall itself belonged to Simon Benson. Entrepreneur immediately assessed the commercial potential of the place, and in 1914 he built here a road and even a small hotel, so residents of surrounding towns could come for the weekend. The hotel operated until 1925, and now its building is occupied by a restaurant (2nd floor) and an information center for tourists (1st floor). When the place became popular, they built a beautiful stone bridge, which can still be seen today. This structure, created by Italian specialists at the request of Benson, is the most photographed architectural landmark in the state.

Almost every beautiful place on Earth has a romantic legend. Once upon a time a tribe of Multnomah Indians lived near these places. One day a terrible and unknown disease began to kill members of the tribe one by one. Then the shaman declared that only a human sacrifice would placate the spirits and stop the epidemic. The daughter of the chief of the tribe offered herself as a sacrifice without hesitation, jumping off the highest cliff. By stopping the terrible epidemic, she saved all her fellow tribesmen. After her death, a spring gushed from the mountains and a waterfall appeared.

Multnomah is located 30 km from Portland between the small communities of Corbett and Dodson. The road runs very close to the waterfall, so it is easy to find. Immediately from the parking lot there is a beautiful view. Next you will need to go through a pedestrian tunnel under the highway. On the way to the waterfall, you will see a railroad bridge with occasional freight trains whizzing by.

By car, take Interstate I-84. At Exit 31, turn around and pull into the parking lot. It will take you 30 minutes to drive from Portland. But experienced hikers recommend more scenic routes:

The parking lot at the falls is quite large, but it’s worth knowing that sometimes there isn’t enough room for everyone, too, so they close the gate. You will not be allowed to stop on the highway, and will have to drive further in search of a place to leave the car. You will most likely have to take a bus to get to the waterfall in that case.

The view of Multnomah Falls on Google Maps, as seen from the hiking trail

There are tour buses from the city of Portland that will take visitors directly to the falls. This is the easiest way for the traveler, because you don’t have to look for a parking spot, especially on summer days when there are a lot of people. The shuttle bus fare is about $10 and departs every 15-20 minutes.

There are also Columbia Gorge Express buses to the Falls and other Portland attractions every 1.5 hours.