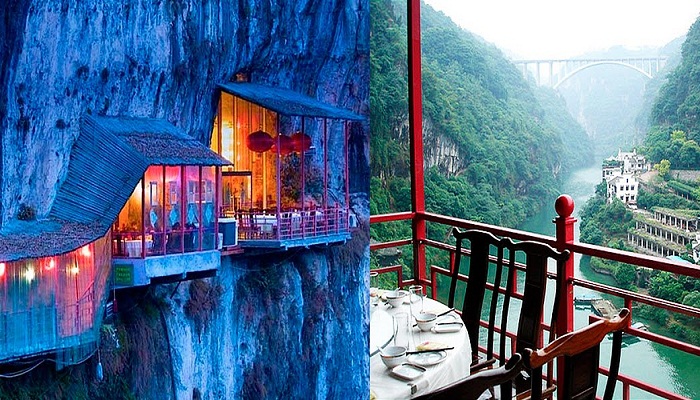 China is famous for many things, but the most impressive objects are always in inaccessible places. The Celestial Empire especially excels at building incredible suspended structures that take the breath away even from the most desperate. It already came to the fact that at a great height at the edge of a cliff created a stunning “floating” restaurant, which attracts fans of particularly “spicy” and those who like to reflect on the meaning of life and eternal values. 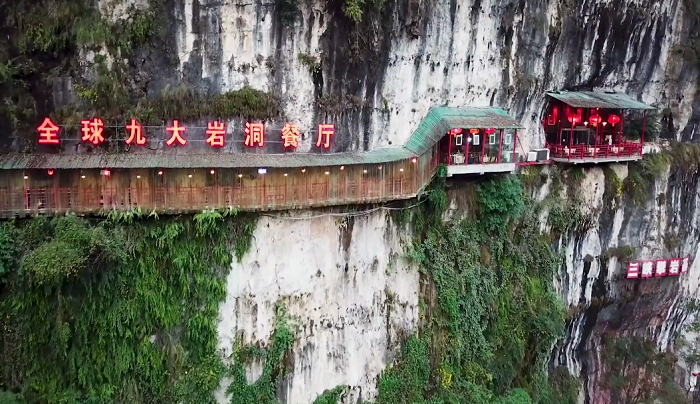 Chinese restaurant Fangweng is one of the most extreme restaurants in the world.| Photo: youtube.com/ © dailyWOWvideo.

Thrill seekers will definitely appreciate the Fangweng restaurant, which is located in Happy Valley near the city of Yichang, Hubei province of China. Xiling Gorge, in which it is located, is famous for its picturesque parks, high cliffs, caves, among them the world-famous “Cave of Three Travelers” (Sanyou). 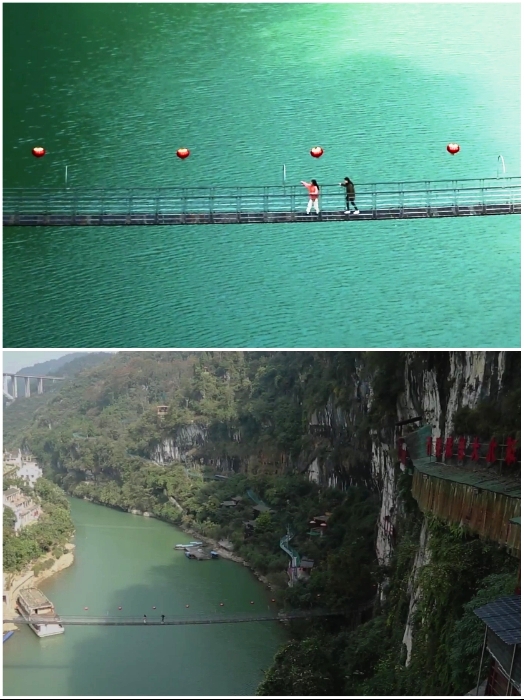 To get to the unusual restaurant, you need to cross the suspension bridge “Sanyou Cave Bridge.”| Photo: youtube.com/ © dailyWOWvideo.

Just along the steep cliff at a dizzying height, the unique Fangweng restaurant hovers. But to enjoy the gastronomic delights, you have to overcome the constantly swinging narrow suspension bridge “Sanyou Cave Bridge”. The locals call it the “Bridge of the Brave” because it’s situated over a deep canyon with a deep water river running through it. Crossing the bridge is complicated by the fact that it loosens at the slightest whiff of wind, not to mention when it is walked by several people. 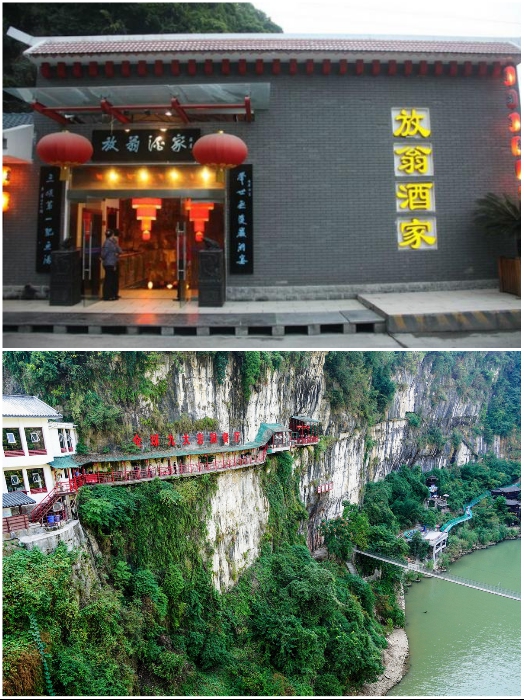 To get to the restaurant, you have to go through the gatehouse and overcome a pretty creepy path.| Photo: vilingstore.net/ financoff.com.

If you get to the cliff without adventure, there will begin a new test of fortitude and courage, because the further way goes along the path, which was laid along the cliff. After passing through the gatehouse, located in a fairly modern building, visitors find themselves on the aforementioned trail, “hovering” over a deep canyon. 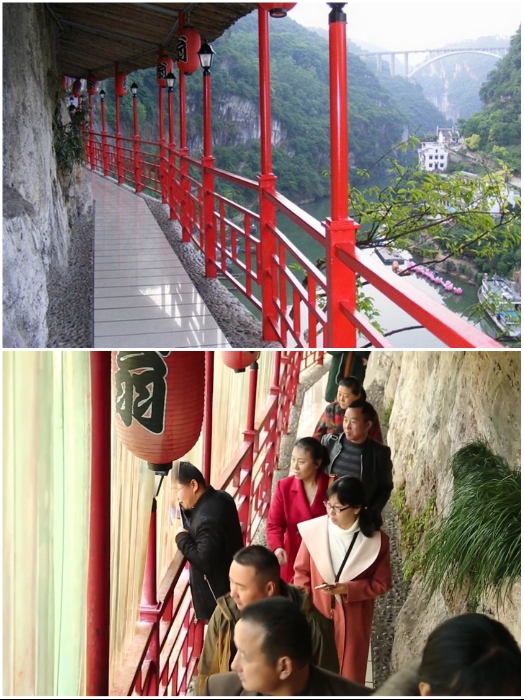 Along the rock, there is a path that leads to the main restaurant hall and to the balconies. | Photo: inspired.com.ua/ youtube.com, © dailyWOWvideo.

Only after that you can breathe easy, because you will find yourself in the main dining hall, located in one of the caves of the cliff. But the balconies are already taken out beyond it and just hang over a deep chasm, so those who like to tickle their nerves can not relax. 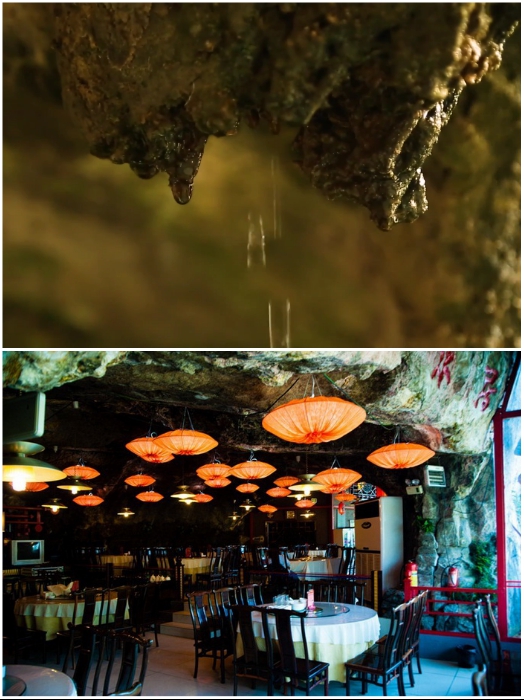 The cave has a pristine look and its main decoration were charming lamps.| Photo: prohotelia.com/ youtube.com, © dailyWOWvideo.

In order not to disturb the natural charm of the stone vaults, the cave itself was not remodeled in any way, just installed nice lamps, more like the famous Chinese lanterns, as well as a bar counter, tables and chairs. A huge number of those wishing to visit an unusual restaurant is attracted not so much by the excellent Sichuan / Chinese cuisine and the efforts of the chef, as by the unforgettable experience and the surrounding beauty. 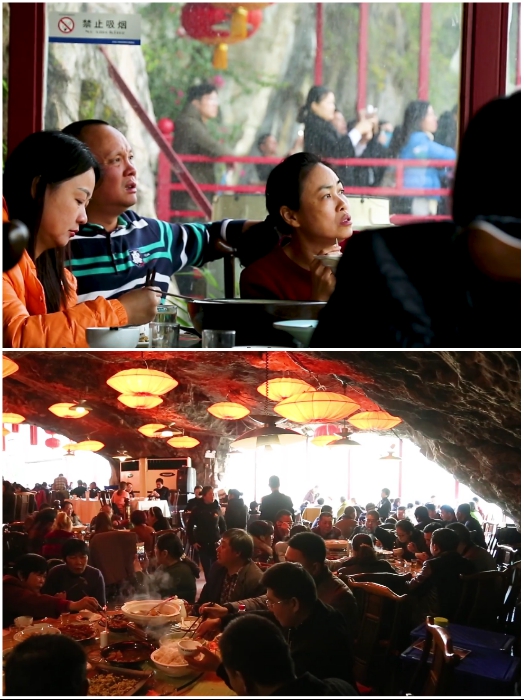 Despite its rather insecure location, the restaurant is always crowded.| Photo: youtube.com/ © dailyWOWvideo.

Most visitors are beckoned by the chasm beneath their feet and the incredible beauty of the Yangtze River, which flows down a deep canyon. For this reason, daredevils who venture here tend to grab tables on the “soaring” balconies. But that’s not easy to do, given the daily influx of visitors. Most guests have to make do with tables inside a safe and secure cave, the farthest corners of which are so close to nature that you can watch the water dripping. 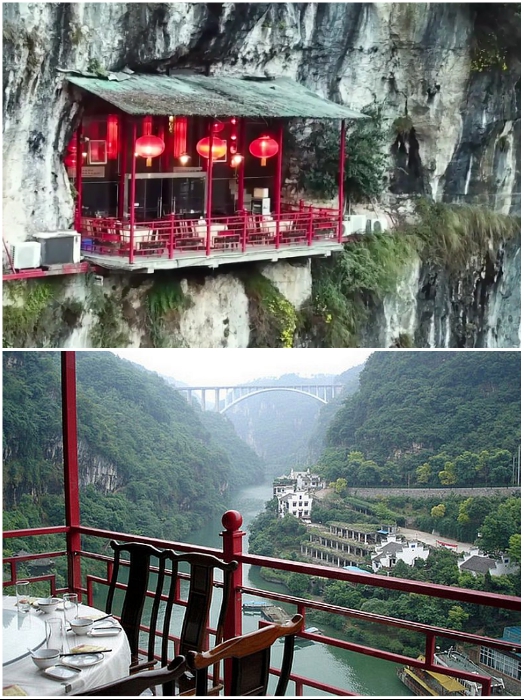 Balconies hang over the gorge through which the picturesque Yangtze River flows.| Photo: inspired.com.ua/ youtube.com, © dailyWOWvideo. 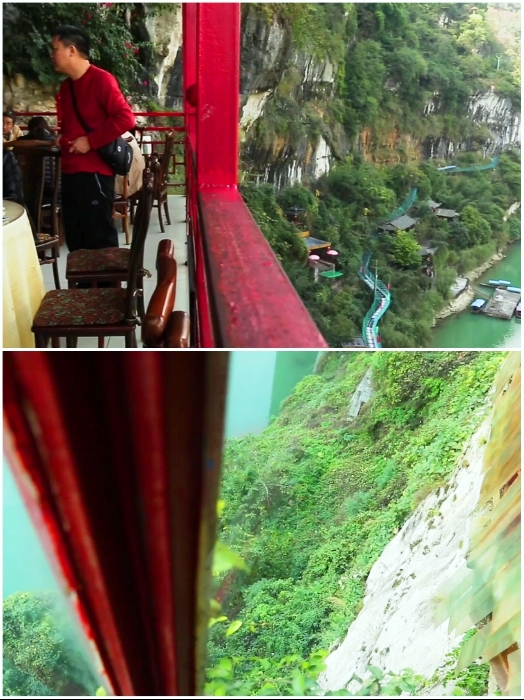 The fact is that the most sought-after places are arranged on natural ledges of the cave, which were slightly enlarged and reinforced with concrete. For safety, they were fenced with railings, which were originally made of wood, but then the lower part of the fence was replaced with metal. 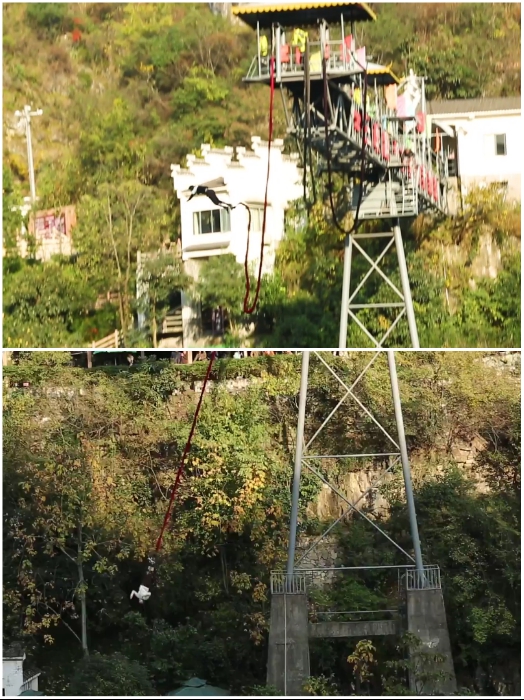 For thrill seekers there is a tower for bungee jumping. | Photo: youtube.com, © dailyWOWvideo.

According to the Novate.Ru editorial office, a special tower was built near the entrance to the restaurant, on which a platform for bungee jumping was equipped. And those who may not seem enough adrenaline, you can “feed” a jump into the very abyss. The only thing the organizers of this action ask to do it before a dense dinner, to avoid unpleasant surprises for sure. 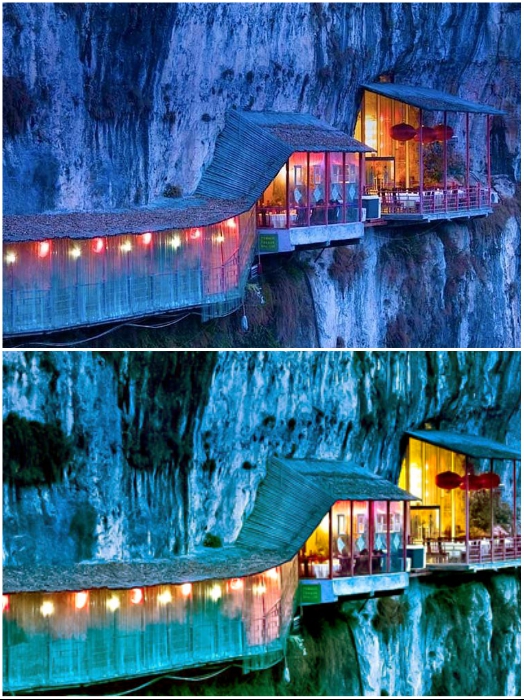 The restaurant looks especially breathtaking at night, but it is also scarier to get there.| Photo: vgosti24.ru.

Interesting: bungee-jumping is an extreme attraction (some people consider it a sport), which involves jumping from high-rise structures or bridges with an elastic rope attached to the legs / other parts of the body. Once the rope is stretched to its limit, it shortens and lifts the extreme upwards and this cycle is repeated several times. If the height is sufficient, the fall speed can reach 120 km / h, and the rope is stretched from 40 to 170 m.

Further than the Chinese in creating extreme restaurants went only hotel owners in the Maldives, where they were placed under a 5-meter deep water.

Fangweng restaurant, lunch in the Sanyou cave and over the precipice, China

For extreme lovers it is definitely worth visiting the Fangweng Restaurant (Sanyou Qiaodong Qiaotou, Nanjin Guan) in Yichang, Hubei province, China. It is built on a steep cliff and “hangs” at a great height above the Yangtze River; not everyone dares to reach it by the narrow bridge, which as well as the restaurant overhangs the abyss.

Fangweng Restaurant is located next to the famous cave in China – Sanyou , which translates from Chinese as “Cave of Three Wanderers” . In one of its outlets, which overlooks the Yangtze River at a high altitude, a Chinese restaurant was created, it is held by a small rock ledge. So it is half inside the cave and half outside, as if hanging over an abyss. But to get there visitors have to get by the hinged narrow bridge-gallery, so that the acuteness of emotions was even more exacerbated.

The restaurant offers Chinese and Sichuan food, its interior walls seem gray and the light from hanging chandeliers is dim enough, and though the food here is tasty enough and the chef will please you with his specialties, but it is not this that attracts people here, it is the sharpness of emotions. And if to sit down in the special department of the restaurant which is located on the concrete platform in the form of a balcony where bright light illuminates some tables standing there, even a bit in the throat of especially impressionable people may not come up. After all, knowing that, this platform as if hanging in the air at a great height above the river, immediately adrenaline rushes into every cell of the body.

But what a stunning view opens from this balcony, here and the deep canyon, and steep slopes which are thickly wooded, an elegant bridge in the distance and the Yangtze itself, the murky yellow water which is not inferior in color to the Huang He. If anyone does not have enough of these impressions, opposite the entrance to the restaurant is a bungee-jumping site, in the restaurant you can often hear the desperate cries of daredevils who decided to make a jump. But most importantly if you still want to jump, do it before you devour the delicious food in the restaurant.

The entrance to the Fangweng Restaurant begins at the white two-story building – “passageway”, located at the very Sanyou Cave Bridge, which also goes to the restaurant. Fangweng restaurant is sure to tickle your nerves and leave unforgettable impressions. It is open for visitors every day from 9:00 am, seven days a week.