Due to its unique location and temples at high altitude, Fanjing Shan Mountain, or as the Chinese call it, is now on the list of world famous sights. 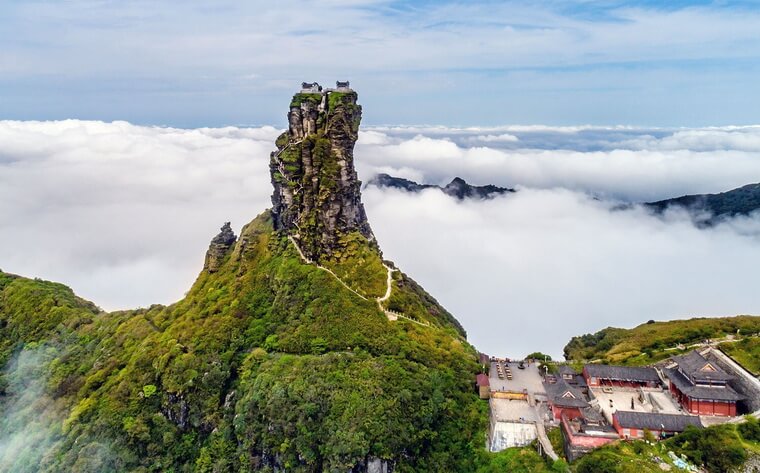 Rising to a height of over 2,570 meters, Mount Fanjingshan became a UNESCO World Heritage Site in 2018. In addition to being a natural wonder, there are ancient Buddhist temples in the area.

Mount Fanjing is considered a sacred place in Buddhism, and its name means “Pure Land of Brahma. Its peak is called the Golden Peak of the Red Cloud. It is topped by two temples with a narrow gorge between them and a footbridge connecting them.

Where is it located.

Fangjingshan lies about 60 kilometers from the city of Tongren in Guizhou Province in southwestern China. Geographic coordinates (27.909971, 108.691770)

The ecosystem of Mount Fanjing

The mountain’s relatively isolated location has given rise to a great diversity of plants and animals. There are over 2,000 species of plants and trees, many of which are unique.

Fanjing Mountain is a habitat for rare and endangered animals, such as the Tibetan macaque, the smoky leopard, the giant Chinese salamander, gray and black bears. And among them the golden Guizhou monkeys. There are only 800 of them left, and the Chinese government is trying its best to protect them. 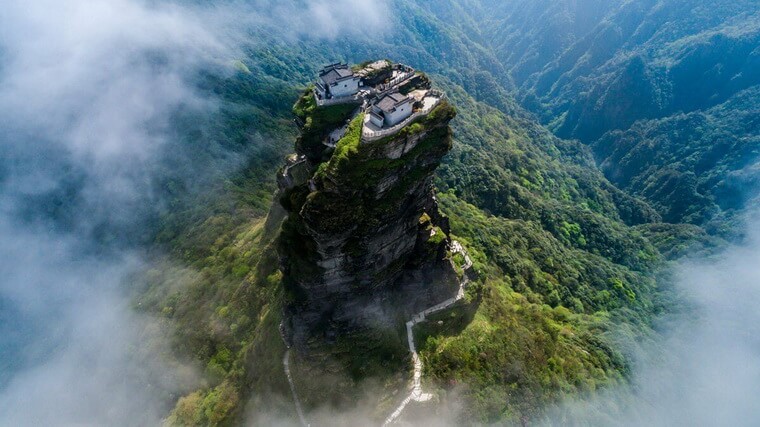 Many Buddhists believe that Fanjingshan is the place where spiritual enlightenment is attained. Since the Tang Dynasty, which ruled China from the 7th to the 10th centuries, many temples have been built here, but only a few have survived.

A striking example of ancient history was a pair of temples built on top of a huge stone pillar in the shape of a giant finger. It is what is called the “Golden Peak of the Red Cloud”. It rises 100 meters above the surrounding area. 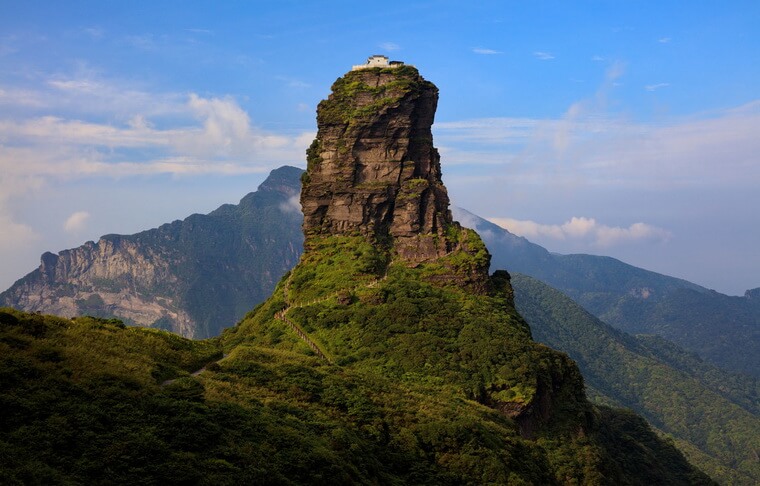 At its summit are two famous temples – the Temple of the Buddha and the Maitreya Temple. They are separated by a narrow canyon, but connected by a short and picturesque bridge. 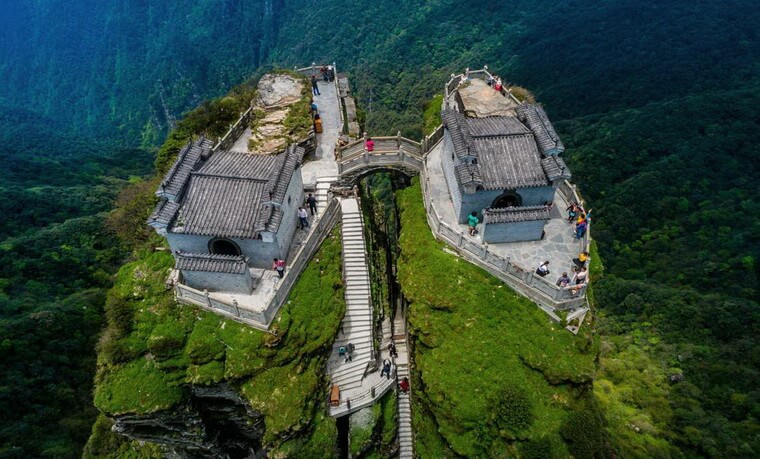 The temples themselves are quite modest in size. Their main attraction is the incredibly breathtaking scenery that opens from the top.

In 2010, the Fangjingshan Buddhist Cultural Park opened with the Golden Hall. There is a five-meter statue of Maitreya Buddha made of 250 kilograms of gold and thousands of precious stones. It is said to be the largest gold statue of Maitreya in the world.

An interesting fact is that the Buddha Light is one of the most exotic wonders on Mount Fanjing. It is said that people often see a colorful huge mirage depicting the Buddha’s shadows in the clouds at sunrise and sunset

For up-to-date information on opening hours and entrance fees, visit the official website of

The isolation of these places has become very attractive to tourists. 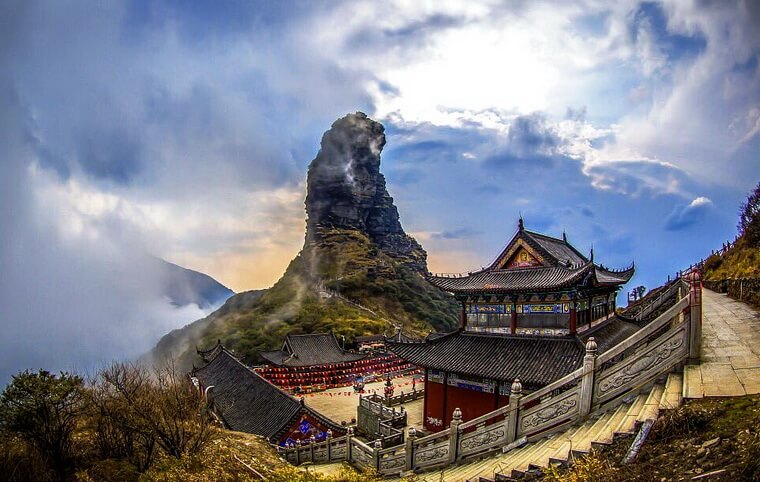 A visit to the top of the mountain, where the Buddhist temples are located, is a must. However, the ascent is not for the faint of heart. Although there are stops along the way and even a few snack booths.

Legend has it that there are 8,888 steps leading up to the top of Mount Fanjing and that one reaches enlightenment by climbing them. If you dare to do this climb, be sure to count the number of steps. It is said that the ascent takes at least four hours. 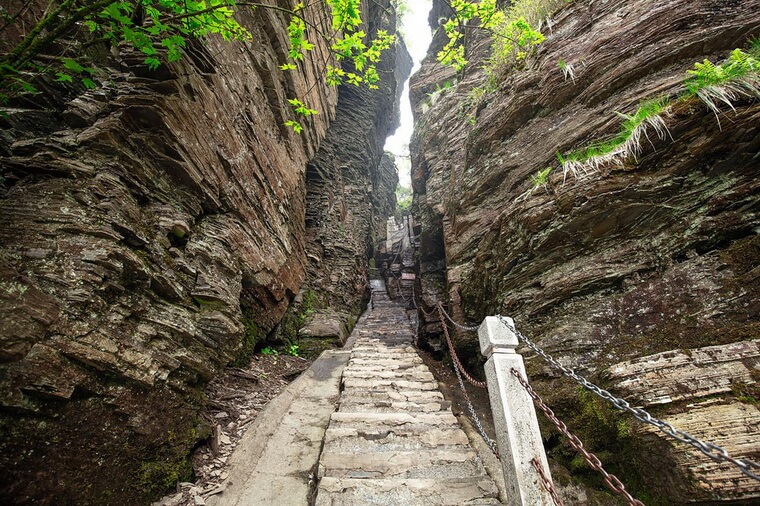 As you can see the way to the top of the mountain Fanjingshan is not the easiest.

Another option is to take the cable car up to the closest point to the mountain, known as Mushroom Peak. 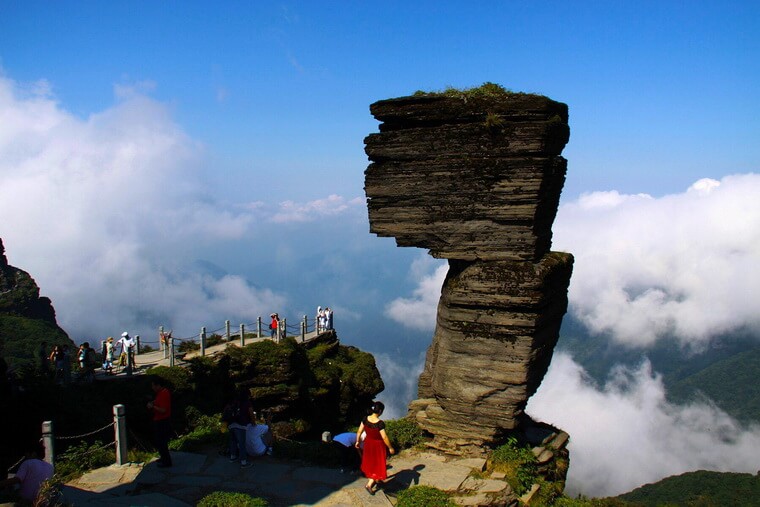 Fangjing Mountain is a secluded, beautiful and quiet place that is sure to impress you with its incredible contrast after the noise of the big city.

Of course, spring and summer would be the best time to hike Mount Fanjingshan. However, at other times, the mountain is no less attractive.

READ
Mayon Volcano is the most active volcano in the Philippines

Spring (from April to May) is the most beautiful season of Mount Fanjing. At this time, azaleas bloom all over the mountains and plains in the vicinity.

In summer, nature is fragrant and perfectly complements the solitude of Mount Fanjing. But in summer it can rain with thunderstorms, so take umbrellas and warm clothes.

Autumn is like a colorful world, with an incredible mix of reds, yellows and greens.

If you think there’s nothing to do in winter, you’d be wrong. Winter is the best way to accentuate the absolute detachment of this place. The crystal snow transforms Fangjing Mountain and gives it a special charm. 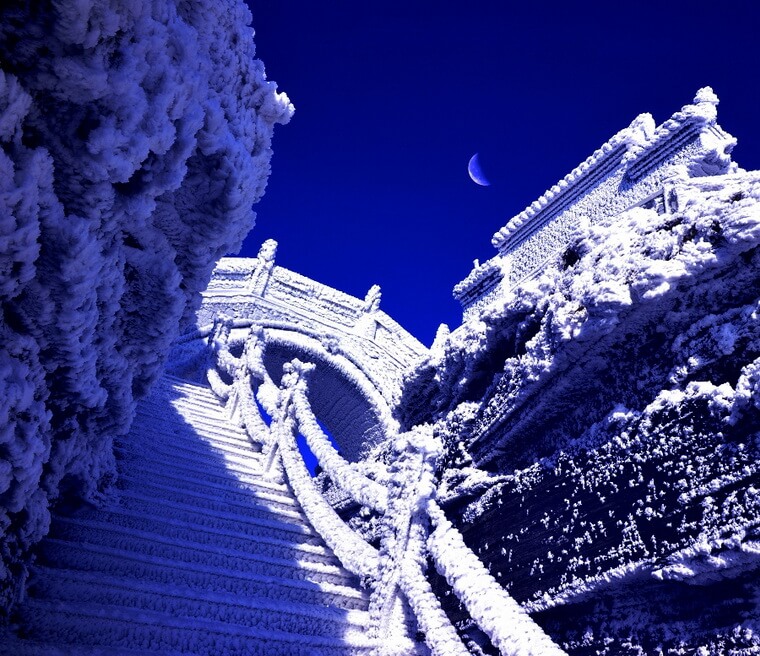 In any case, remember that the climate at the summit is quite changeable. If possible, it is best to wear warm clothing with long sleeves. Raincoats will be much better than umbrellas because of the strong winds at the summit.

Getting to Mount Fanjing is not easy. There are buses to the mountain every day, and the trip will take about an hour and a half. Please note that the number of tourists in the area is limited.

The nearest airport is Tongren Airport, located 22 kilometers from the center of the town of the same name.

You can take the K71/74 (North Hainan-Chongqing) train and get off at Guizhou Tongren station.

There are daily buses to Tongren from Changsha, Zhangjiajie, Changde, Jishou, and Fenghuang. Then there are many buses to Fangjin Mountain from the North Station every day. 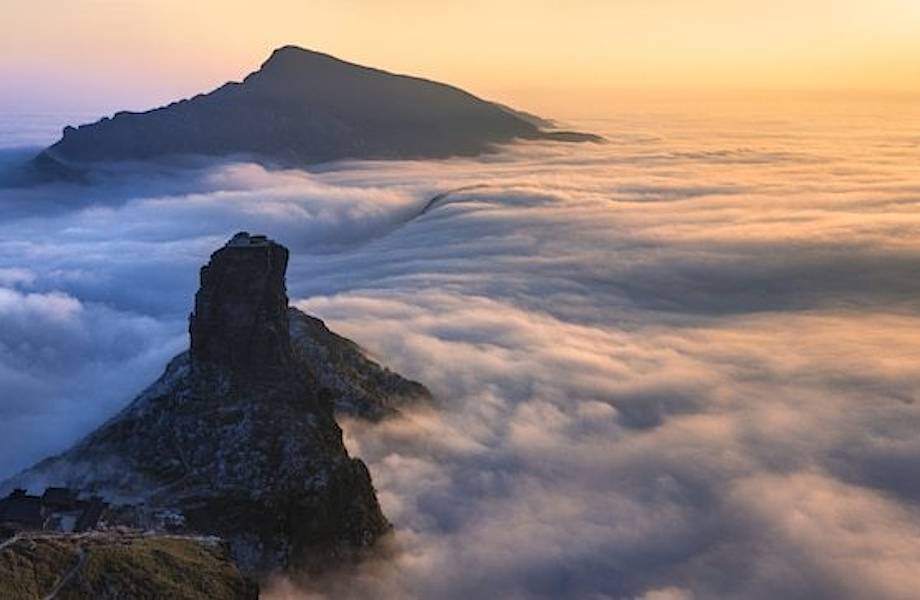 High up in China’s Wuling Mountains are two Buddhist temples. There are 8,888 steps leading up to the peak of Fanjingshan, which is the highest point of the mountain range. To get to these stunning places of worship is an impressive journey. The construction of this staircase is a striking testament to the faith and devotion of Chinese Buddhists, who hold these places sacred.

The area, also known as Fanjing Mountain, took its place on the UNESCO World Heritage List last year. The area around it is a national reserve, and all this beauty is located in Guizhou province. This place is of great importance in Buddhism, as it is believed that here the Buddha Maitreya reached enlightenment. Temples were erected here as early as the 7th century B.C. 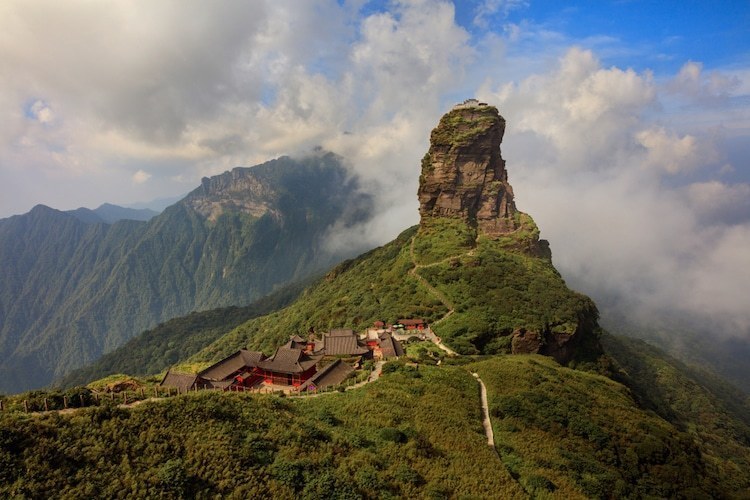 The peak of construction on Fangjingshan came during the Ming Dynasty, when about fifty Buddhist temples were built for devout pilgrims who made long journeys to see the sacred area for themselves. Today, most of the temples have been destroyed, but many architectural monuments fortunately remain intact. Nowadays the region attracts not only Buddhist devotees but also ordinary tourists. 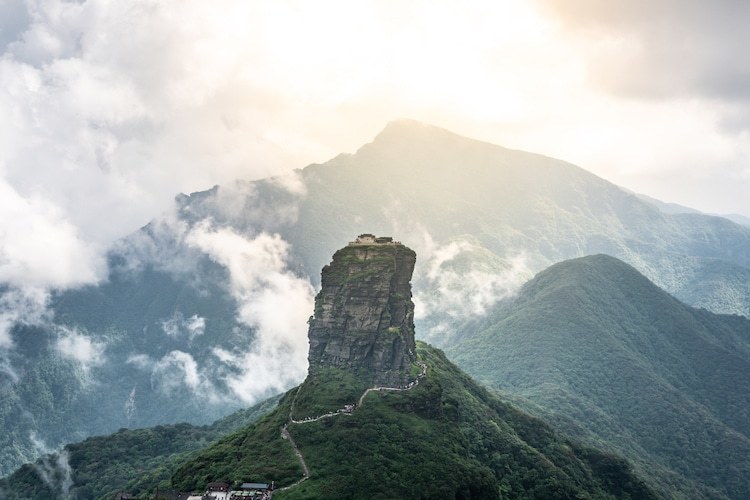 Here, at an altitude of 2 336 meters above sea level, are the unique and magnificent Temple of the Buddha and the Temple of Maitreya. The buildings are separated by a ravine, so that visitors have to wander from one temple to another on a narrow stone bridge. And to overcome the nearly 9,000 steps to the place, it will take 4 hours. On the way, however, there are rest and snack stops along the way. 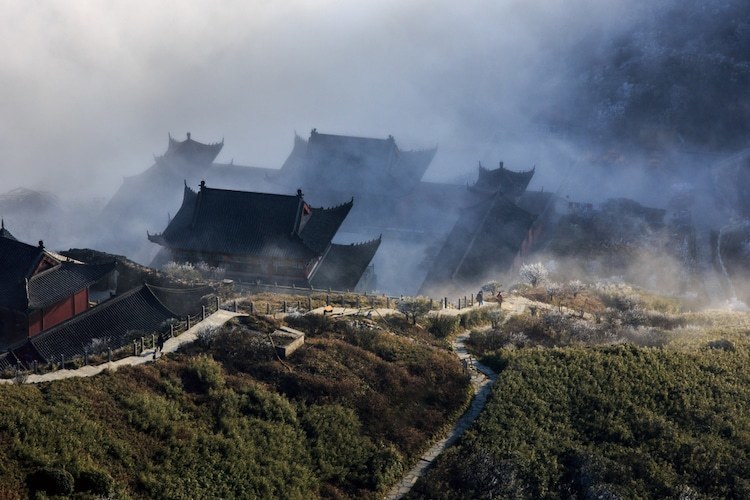 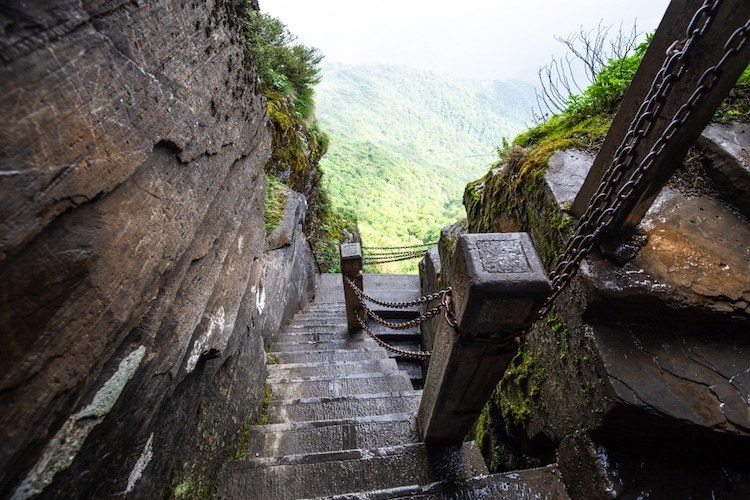 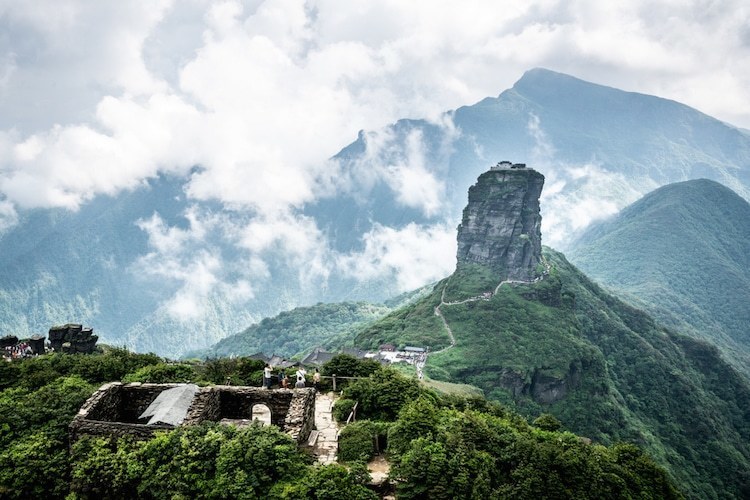 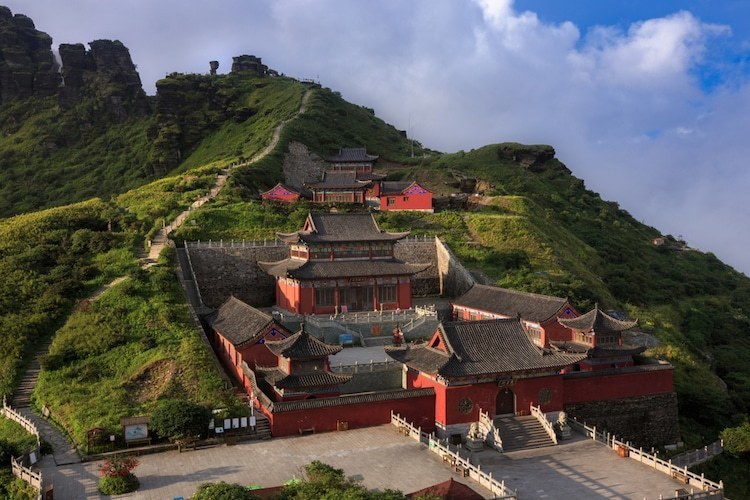 Because Fangjingshan has remained relatively isolated for so many years, it boasts amazing biodiversity. At more than half a kilometer high, it is home to more than 2,000 endemic plant species and hundreds of endangered animals. 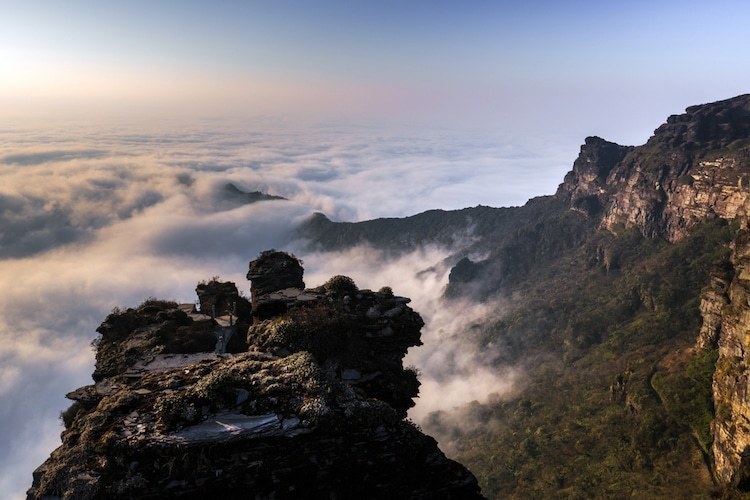 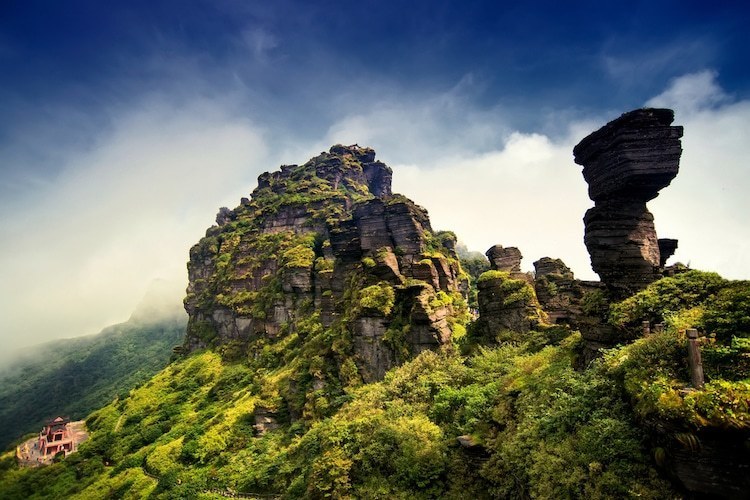 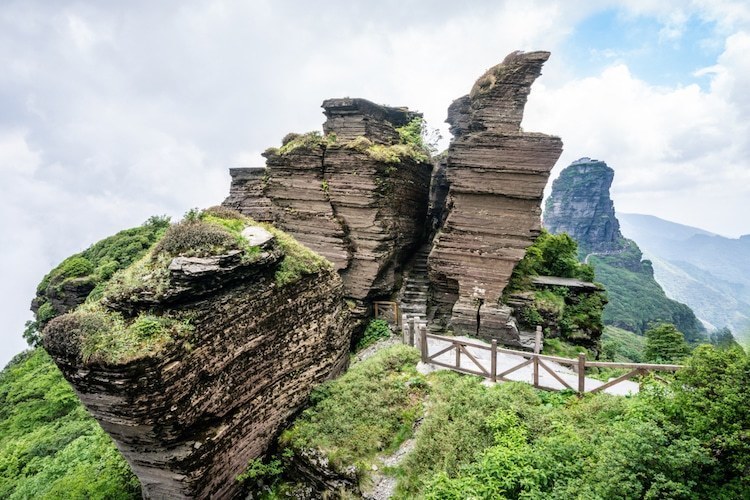 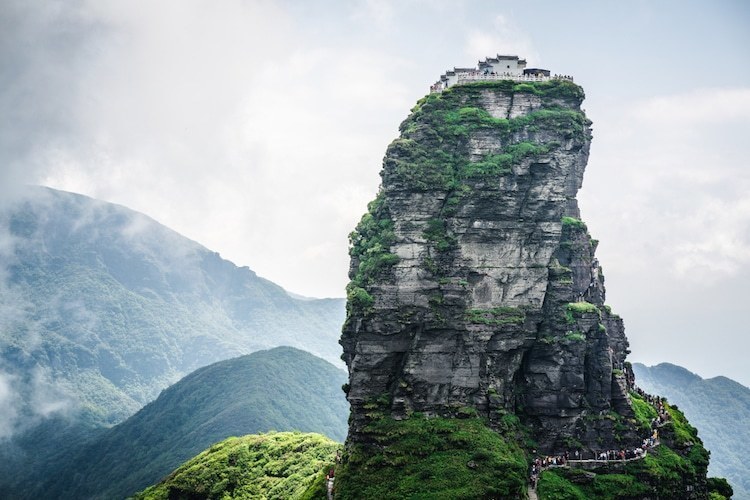 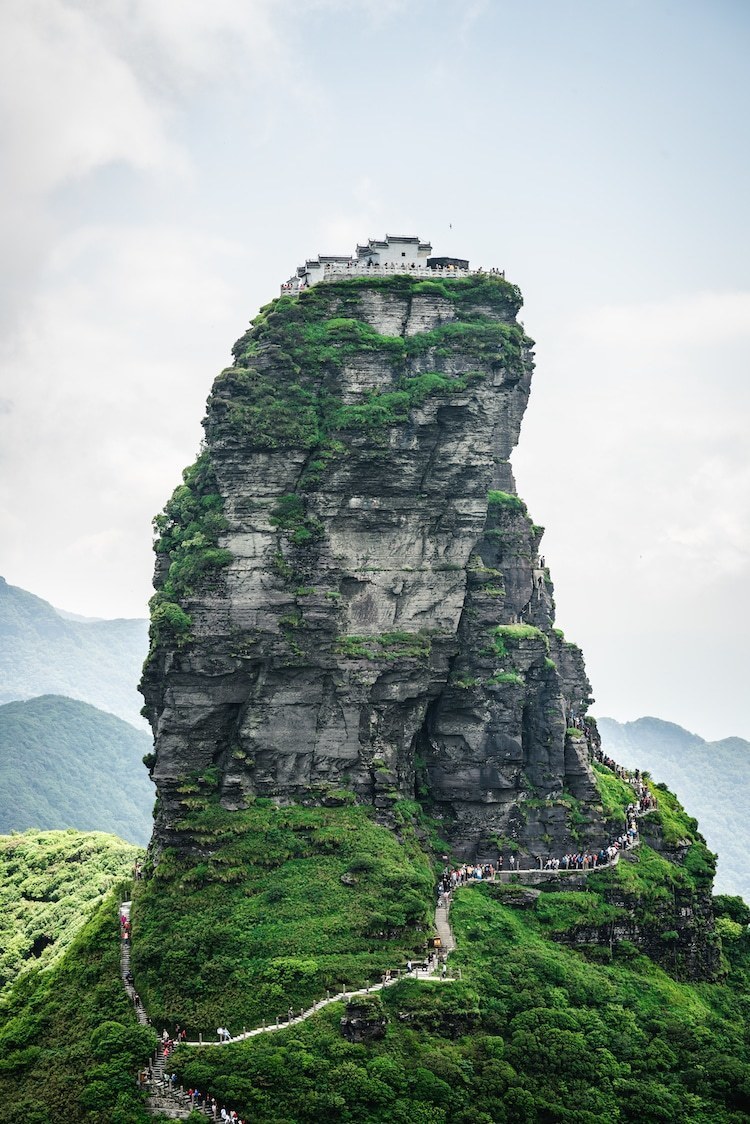 Join our community on Telegram, there are already over 1 million of us