In Wales’ Snowdonia National Park is a small historic town called Harlech, known for its towering castle built by Edward I in the late 13th century. But now Harlech boasts another claim to fame. As The Guardian’s Stephen Morris reports, one of the city’s winding streets has officially been declared the steepest in the world.

Ffordd Pen Llech, as the street is called, won the title of Guinness World Record for steepest street after a hard-won campaign. The honor previously belonged to Baldwin Street in Dunedin, New Zealand, whose impressive slope is 35 percent at its steepest point. But Harlech resident Gwyn Headley suspected that Ffordd Pen Lleck was steeper.

“I first realized this street was a contender for the steepest street in the world when my car slid right off with all four tires,” he says.

Before he could get the world record title, Harlech had to call in a qualified surveyor to estimate the slope of the Ffordd Pen Llech. The task was entrusted to one Myrddin Phillips, an expert on measuring in the mountains. As the Guardian reported earlier this year, Phillips relied on both satellite technology and less high-tech methods — chalk to mark important locations and bricks to hold the tripod steady — to take his measurements. The numbers were subsequently processed by a mathematician, and eventually it was determined that the Ffordd Pen Lleh gradient reached 37, 45% at the steepest point.

“The record is measured based on the steepest section with the highest gradient at 10 meters,” Guinness explains. “If you take the average steepness, you may have a road where one section is very steep and the rest is flat, which is not a fair estimate. The gradient is measured by taking a 10-meter stretch of road and dividing it by how much it rises/descends over a distance of 10 meters.”

Guinness had to approve Harlech’s calculations, but that alone was not enough to secure the title. According to the BBC, Ffordd Pen Llech also had to meet ten selection criteria, including, among other things, that the road was a public road, that it was completely paved and that it had buildings along the roadway . “Guinness World Records were very specific on the criteria,” Headley says. He was confident in achieving nine of the points, but the last one bothered him.

That particular condition required the city to submit blueprints of the street. Harlech had documents dating back to 1842, but they could not provide any dates pertaining to the street’s early history; Fford Pen Llech is believed to be more than 1,000 years old. The city successfully argued, however, that it would have been difficult to provide records for a time when “there were no such things as blueprints,” Morris notes.

The news that Harlesch took the Guinness Record title as the coolest street was met with jubilation by residents who plan to celebrate the party.

“As someone who was born and raised here, I can’t tell you how special it is,” said resident Sarah Badham. “It’s amazing.”

But those who live in Dunedin, home of the recently deposed Baldwin Street, are not very happy-especially in light of the Cricket World Cup final, where New Zealand lost to England.

“I’m not happy about a lot of things in the world this week, but it really just ruined my week – thank you,” says New Zealand writer Hamish McNeilly, reports the BBC . “I’m not going to get over it, it follows the cricket for me, so we’re still very angry. It’s a bad week, it really is.

Baldwin Street is a source of pride for New Zealanders and an attraction for tourists. Charity races are held here, cyclists explore the street, and every year spectators flock to Baldwin for the Cadbury Chocolate Carnival, when tens of thousands of spherical candies roll down the slope. Residents along the street have taken to selling food, drinks and souvenirs.

But some are taking New Zealand’s world-record loss in stride. Soon after the news broke, a sticker appeared on a Baldwin road sign proclaiming it “the coolest street in the world.”

Ffordd Pen Llech is the new coolest street in the world

Harlech, a small coastal town in northwest Wales, may soon be filled with crowds of tourists. After all, in mid-2019, the Guinness Book of World Records awarded the honorary title of “steepest street in the world” to a short, winding road in this town of just 1,400 people.

Ffordd Pen Llech Road is one of two roads around the 13th century Harlech Castle. It, in turn, is another important location in the city, located on a cliff 1 kilometer from the Irish Sea. 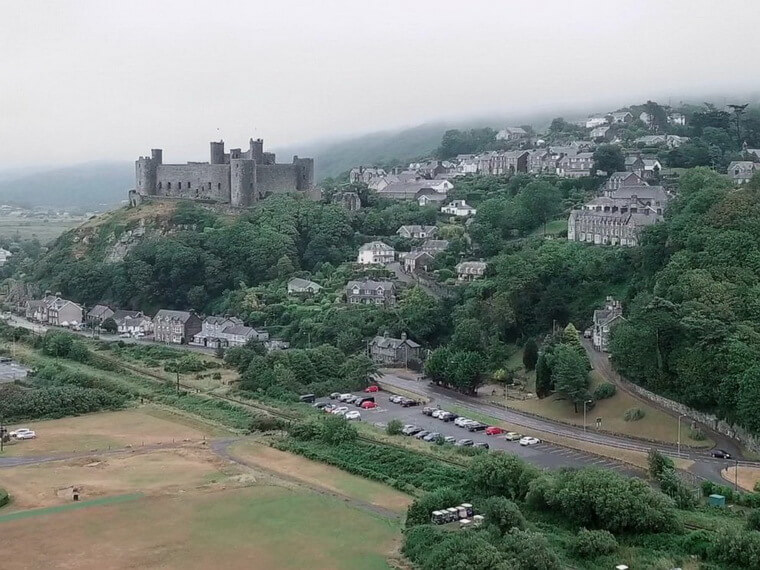 The road descends down a rocky escarpment linking the town center with the railroad station.

The street in numbers.

That is, the slope of Ffordd Pen Llech in the steepest place is 1: 2.67. This means that the road rises 1 meter in height for every 2.67 meters of length. Whereas the similar figure for Beaudoin Street does not exceed 1:2.86.

Not the steepest section of Ffordd Pen Llech Street

Ffordd Pen Llech is so steep that, for safety’s sake, cars are not allowed to drive on some sections of it. To avoid problems with cars, the north side of the street is one-way only downhill. 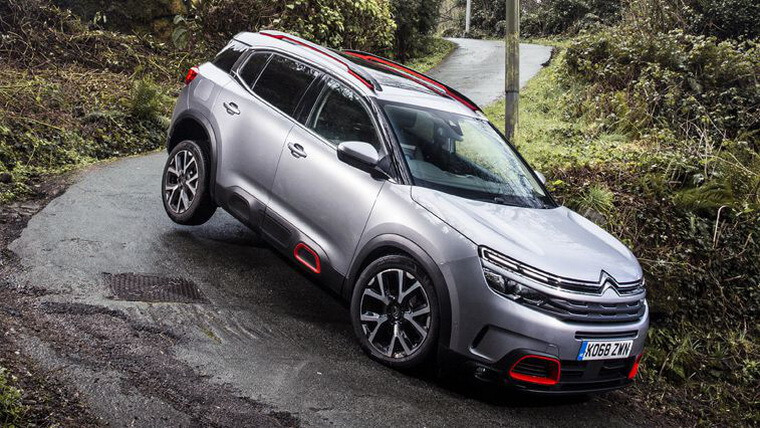 Who and how took the title away from the previous street

Local resident Gwyn Hedley certainly knew about this street. You could say he was the one who stole the title of “coolest street” from New Zealand and passed it on to Wales.

READ
The Spanish Steps in Piazza di Spagna in ... Rome

One day Hedley’s four-wheel drive car was blown down the street, with the wheels completely blocked.

Headley did a little research and was surprised to learn that Ffordd Pen Lleh has a steeper slope than Baldwin Street in Dunedin, New Zealand. Headley, along with some locals, decided to apply to the Guinness Book of World Records.

The process of verifying the steepness of the street was lengthy and required evaluation by an expert surveyor. But in the end, in July 2019, the street gained the long-awaited title. 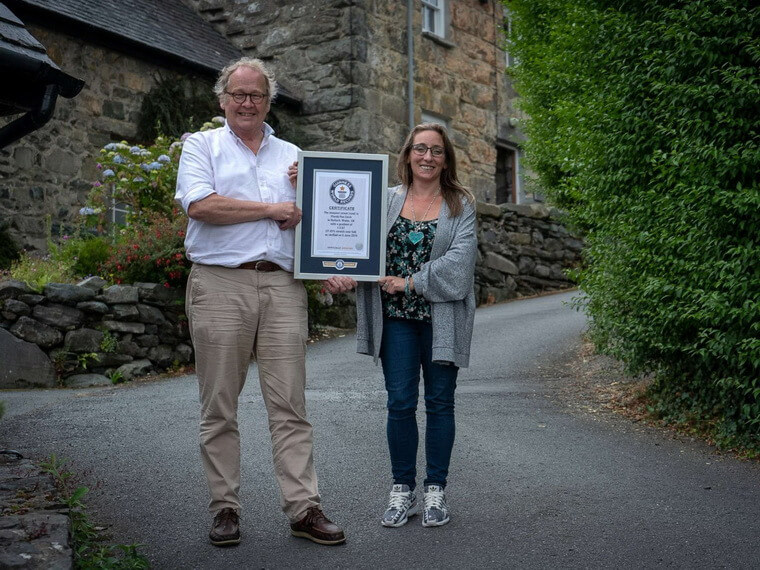 The pluses include an increase in the flow of tourists and, consequently, additional income to the local treasury. But the disadvantages include the same flow of tourists, but from a different point of view. For example, when Baldwin Street was named the coolest street, it attracted tourists who destroyed the property and trampled the gardens of local residents.

The same is expected of Ffordd Pen Lleh. Buses with tourists will arrive and block the approach to the street. In addition, the local authorities will have to build a public toilet (for obvious reasons).

I have to say that unequivocally giving the title of “coolest street” specifically to Ffordd Pen Lech is not quite right or fair (in our opinion). After all, Baldwin Street in New Zealand is quite similar to an ordinary street. Ffordd Pen Lech, on the other hand, looks more like a small alley. 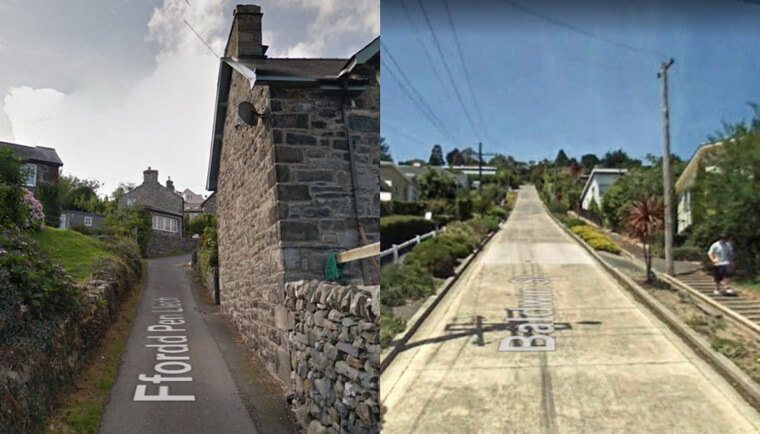