Fingalow Cave is a source of inspiration. Scotland

Off the west coast of Scotland, part of Great Britain, is an uninhabited island called Staffa. On the one hand it is an ordinary, unremarkable island, but it harbors an amazing attraction. All over the world it is known as Fingalova Cave.

Fingalow Cave on the map

The cave is a recess in the interior of the island, ending with a dead end. The walls of Fingal Cave consist of hexagonal basalt columns up to 20 meters high. They were formed in the flow of Paleocene lava, and look like straight, and somewhere curved hexagonal columns.

We should say right away that this word does not refer to “fingals” in the traditional Russian sense. No one will give you a “black eye” (excuse us familiarity), although if you do not adhere to basic safety rules, black eye is guaranteed, because the cave surroundings are not always smooth, and the surface of the rock is not always dry.

Fingal’s Cave was named after the hero of ancient Celtic legends. It is Fingal (literally means “white wanderer”) or as he was also called Finn mac Cumulus, about whom the Scottish poet and mystification lover James MacPherson told in the 18th century.

In fact, James put together many myths about this hero and published a book called The Works of Ossian, the Son of Fingal, Translated from the Gaelic by James Macpherson. Let’s face it, some in this work really echoes ancient legends, and some has already been invented by Macpherson himself. 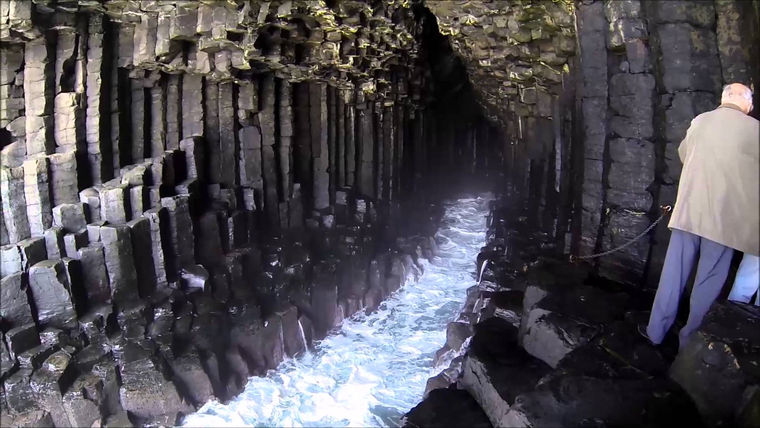 Now look closely. Do you see this? These are the same columns as those on the famous Giant’s Road in Northern Ireland, which is also associated with the legends of Fingal. Perhaps the road between Scotland and Ireland really did exist and ended with Fingal’s Cave. 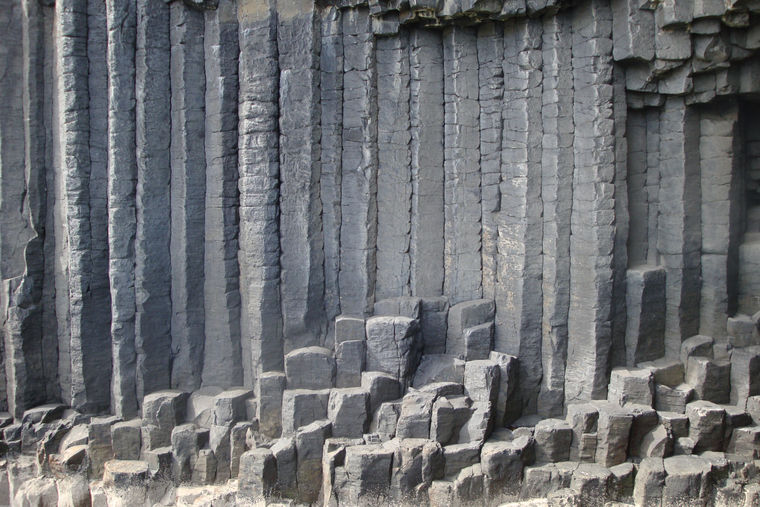 The cave was first discovered in 1772 by naturalist Joseph Banks. The beauty and somewhat unreality of the cave attracted many people, which included world-famous figures such as Walter Scott, Jules Verne, Felix Mendelssohn and even Queen Victoria herself.

The Cave of Melodies

The cave is sometimes called Uamh-Binn, which means “The Cave of Melodies” in Gaelic. And for good reason. Unique acoustics can be observed in the cave. Surprisingly regular columns create a dome effect, which allows the sounds literally change, creating an unparalleled melody. The sounds of the sea waves play differently here. 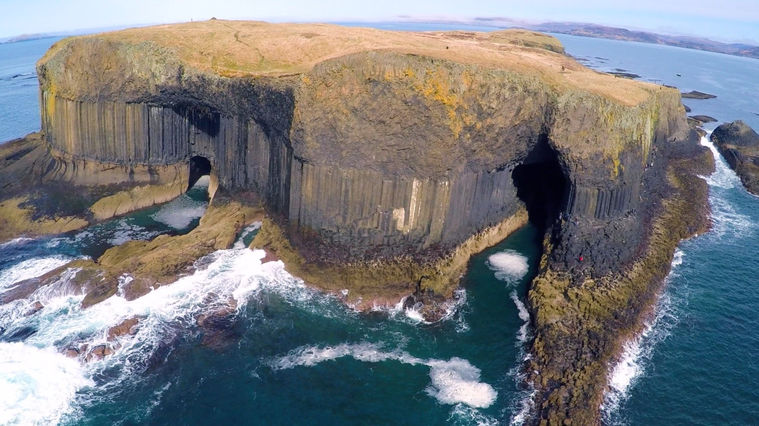 Many people of art under the influence of the Fingal Cave felt a surge of creative energy and discovered new facets of their activity. Mendelssohn wrote the Fingalow Cave Overture. Walter Scott confessed that the place was one of the most amazing in the world. Jules Verne used the description of the cave in his books Journey to the Center of the Earth and The Mysterious Island. One of Pink Floyd’s early songs is named Fingal Cave. The composition was recorded, but the album was never released.

The place is also notable for ordinary tourists, so the sightseeing groups periodically visit here from April to September. The entrance to the cave is quite narrow and dangerous for boats. Typically, tourists are guided along a small path directly above the water’s edge. The duration of stay on the island as part of the tour is about 1-1.5 hours. But it is enough to marvel and click a lot of pictures.

On the way to the island you can meet dolphins and giant sharks. Yes, that’s what they are called Basking shark. It is the second largest shark after the whale shark. It feeds on plankton for tourists that have wandered by, devouring it with its huge open mouth. If you’re lucky, you might see a small striped whale. 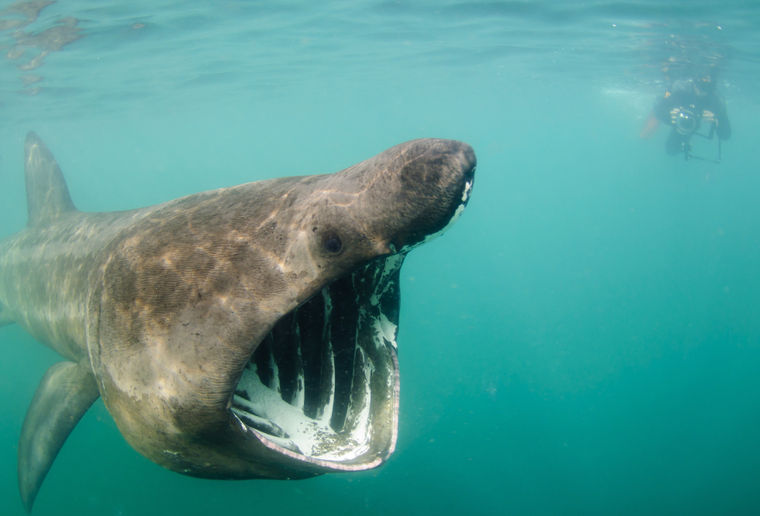 Yes, this is the kind of giant shark you can see off the coast of Staffa Island 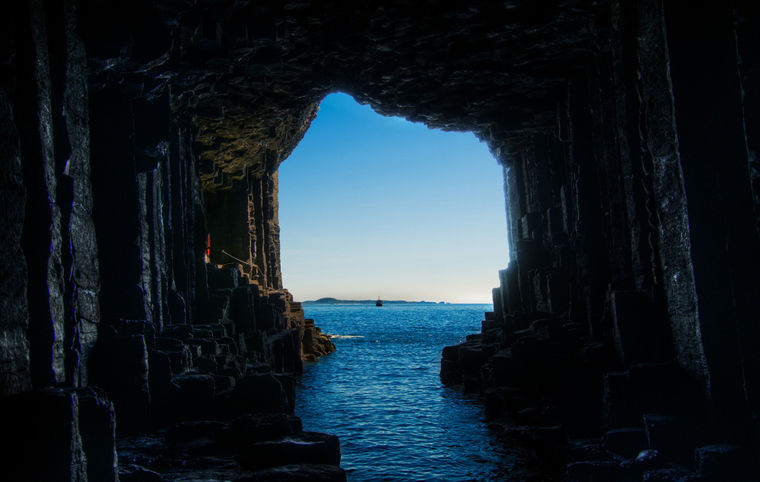 Fingal’s Cave, or Melody Cave, is located on Staffa in the Inner Hebrides, just west of the Isle of Mull. It fascinates with its whimsical sounds and melodies of nature.

Staffa Island itself is very small about a kilometer long and half a kilometer wide, at its highest point it rises 46 meters above sea level. The name Staffa means “pillar island”, and the ancient Vikings called it “the Island of pillars,” most of its coastline, a total length of 2.4 kilometers, consists of basalt cliffs. Although it is small and it would seem what could be interesting about it, but in fact, tourists love to come here because it looks like a cathedral or theater thanks to its naturally created columns.

READ
The City of Cuenca and the Spanish Hanging Houses

As you approach Staffa Island, you can see that it looks like a giant hand stretched out into the Atlantic Ocean. The view immediately reveals that the island is surrounded by dark and elegant symmetrical hexagonal basalt columns that line the sides of the island. Most of the columns are hexagonal, but there are also triangular and octagonal. These columns have been formed as a result of the rapid release of lava from the bowels of the earth. Slowly cooling, the lava crystallized into its present form. But according to legend, these columns were built by giants, and having been on the island willingly believe this legend, because it is difficult to imagine that such perfect polyhedrons could create nature.

The main attraction of Staffa Island, is the cave Fingala, which is located in the south, it is the largest on the island, but it is not remarkable at all. The fact is that the vault is curved like a dome, so the sound lingers here for a few seconds, creating a literal fairy-tale melody. The huge hall of the cave repeatedly repeats the sounds of the surf, and the whole cave literally sings. And the sound from the cave can reach the distance of several kilometers from it.

The length of the cave is 113 meters, and width at the entrance is 16.5 meters. To get close to the cave by boat is impossible, the water entrance is very narrow. The only way is a narrow path that winds just above the water’s edge. The ancient Scots called the cave “An Uamh Bhin”, which means “melodious cave”, but then renamed it in honor of Finn Mac Cumul (aka Fingal), the hero of Celtic folklore, who was a giant and, according to Irish legends, built a dam connecting Scotland and Ireland.

There are numerous caves all around the island, washed out by the sea and riddled with rain and wind. All the caves except Fingal Cave are inaccessible from the shore and can only be accessed by water. Some caves are permanently hidden under water, and you can see them only at low tide.

The island and the cave became known in 1772, after the visit of the famous English naturalist Joseph Banks. He and several members of his team visited the island in the 17th century (1743 – 1820). The expedition explored the island and discovered many caves, including the famous Fingal’s Cave. People were so overwhelmed by its beauty that in their notes they compared the vaults of the cave to the Louvre. Seeing this cave for the first time, Banks exclaimed-“What are the cathedrals and palaces built by men compared to this!” Following Joseph Banks, many famous people of the time visited Staffa Island, including Queen Victoria, Felix Mendelssohn, Walter Scott, William Wordsworth, John Keats, Alfred Tennyson, and Jules Verne himself. In 1832, the painter Joseph Turner painted a landscape depicting the cave that became famous. And after Mendelssohn’s famous overture, The Hebrides or Fingal Cave, the island became even more popular.

You can get there by car ferry from Oban or Lochalin on the Scottish coast to the Isle of Mull, then by boat from Ulva Ferry wharf on the west side of Mull. It’s best to go in spring, when the reef tops are covered in wildflowers. The nearest town is TOBERMORI, 32 km from Ulva Ferri.