In the Alps, on the limestone Dachstein Plateau, there is an unusual observation deck “Five Fingers” (Austria). The Dachstein plateau, known for its exceptional landscape, has been included in the UNESCO list. 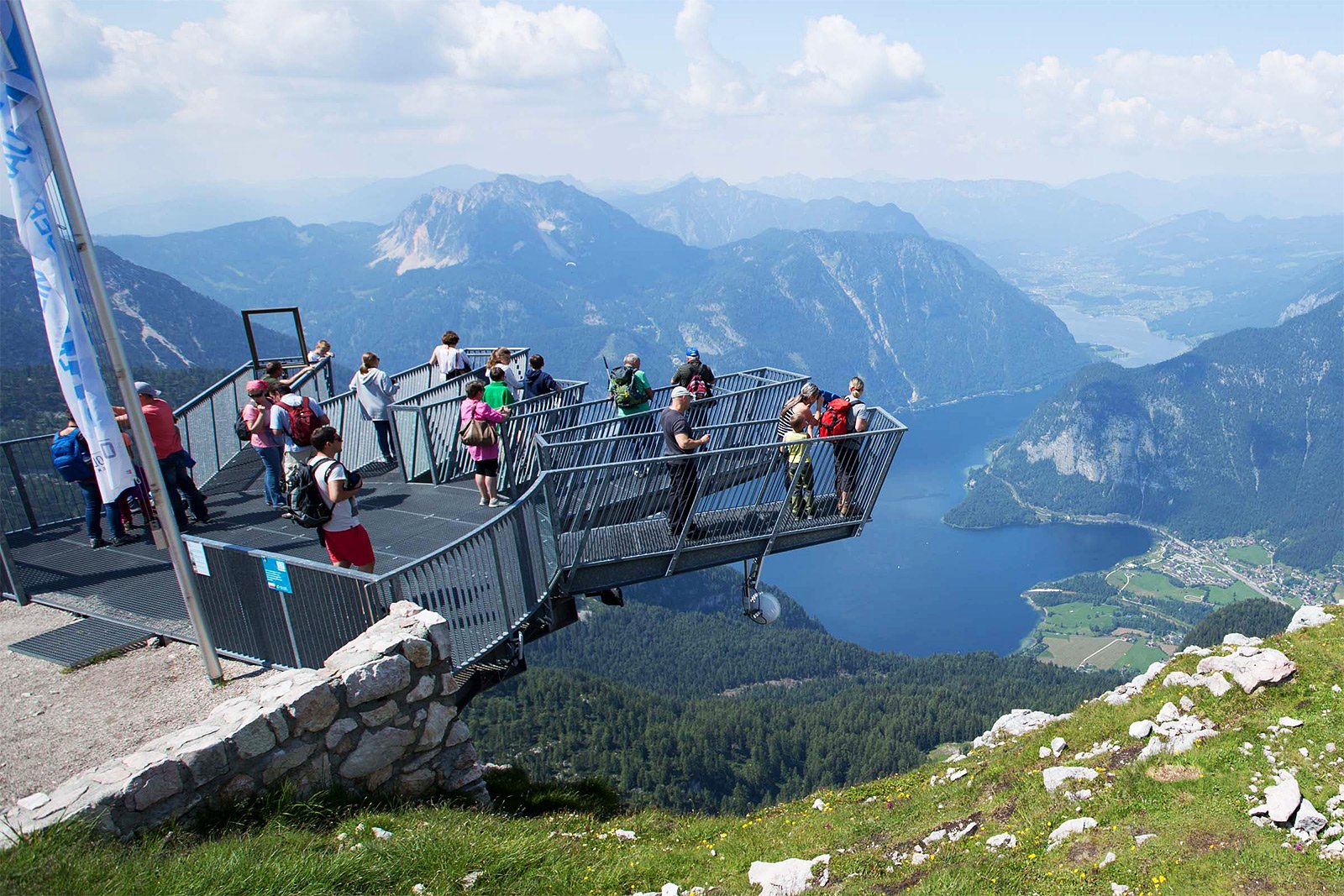 This platform got its name because of its appearance: five metal bridges look like the fingers of an outstretched palm. This “palm” overhangs the abyss, which is 400 meters deep. The height of the bridges over the Halstatt lake is 2,108 m.

The view from the Finger 5 in Austria is really wonderful: at the famous tourist town Halstatt, on the picturesque Lake Halstatt and on the whole Salzkammergut. 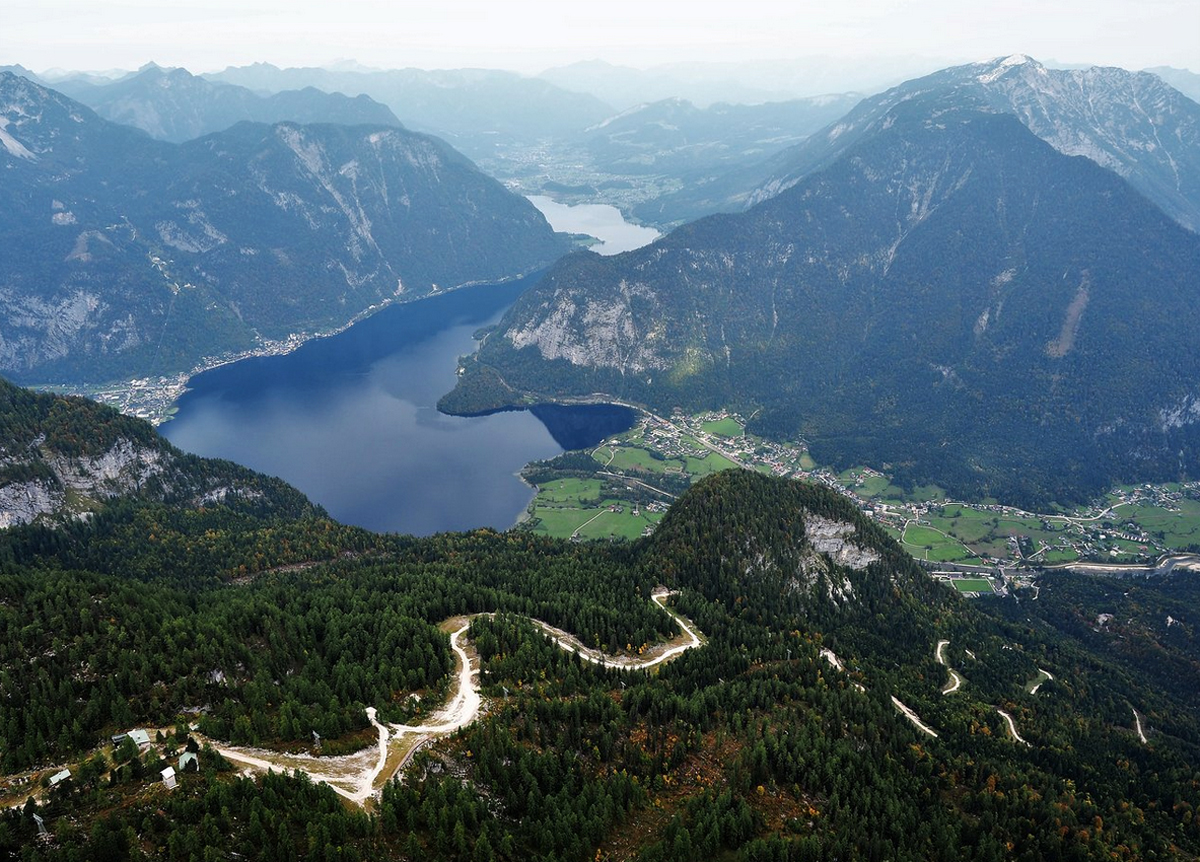 Useful information! At the height of 2,108 meters, Wi-Fi works perfectly, so you can stand on one of the bridges and show your interlocutor all the surrounding magnificence “live”.

Peculiarities of the observation deck design

Each of the 5 “fingers” observation deck has its own features:

How to get to the Five Fingers site 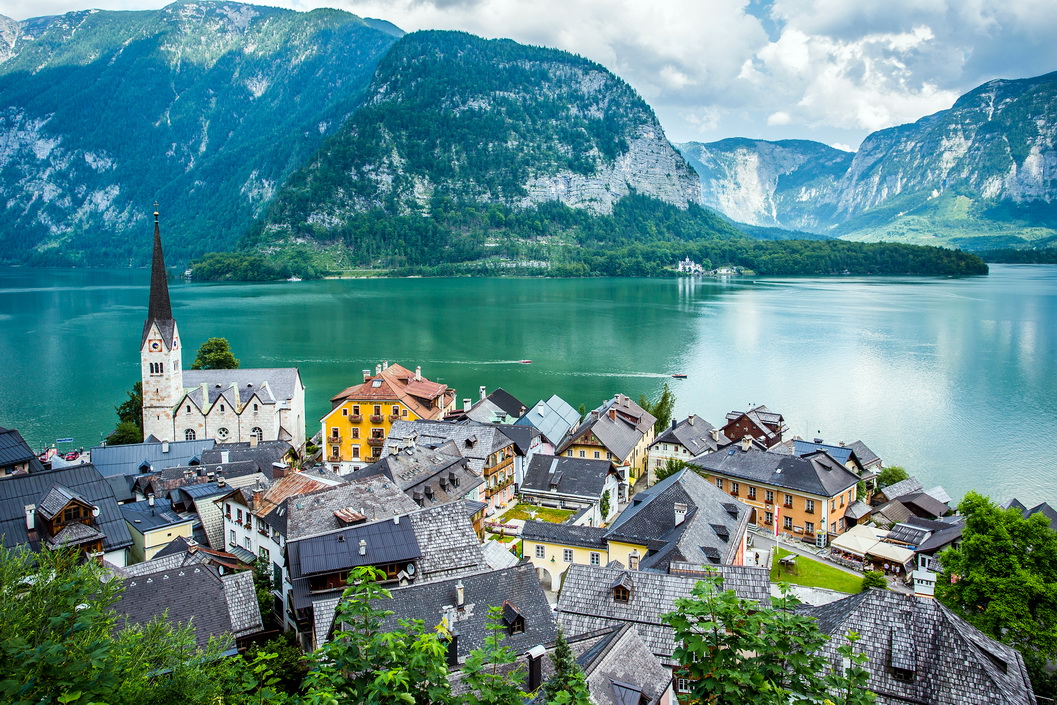 The “Five Fingers” viewing platform is located in the Austrian Alps, near the famous town of Halstatt (about 200 km from the Austrian capital of Vienna). Geographical coordinates of the site: 47.528623, 13.692047.

To get to the observation deck is possible only by cable car from a small town Obertraun, located near the town of Halstatt. The funicular station is free parking Dachstein Tourismus, so it is best to go there by car – from Halstatt way takes 10 minutes. But you can also use the bus number 543 – it goes from Halstatt to park at the funicular the same 10 minutes.

A side note! From the station Schonbergalm you can take a tour to the ice caves of Dachstein, and then return and continue to the lookout point. 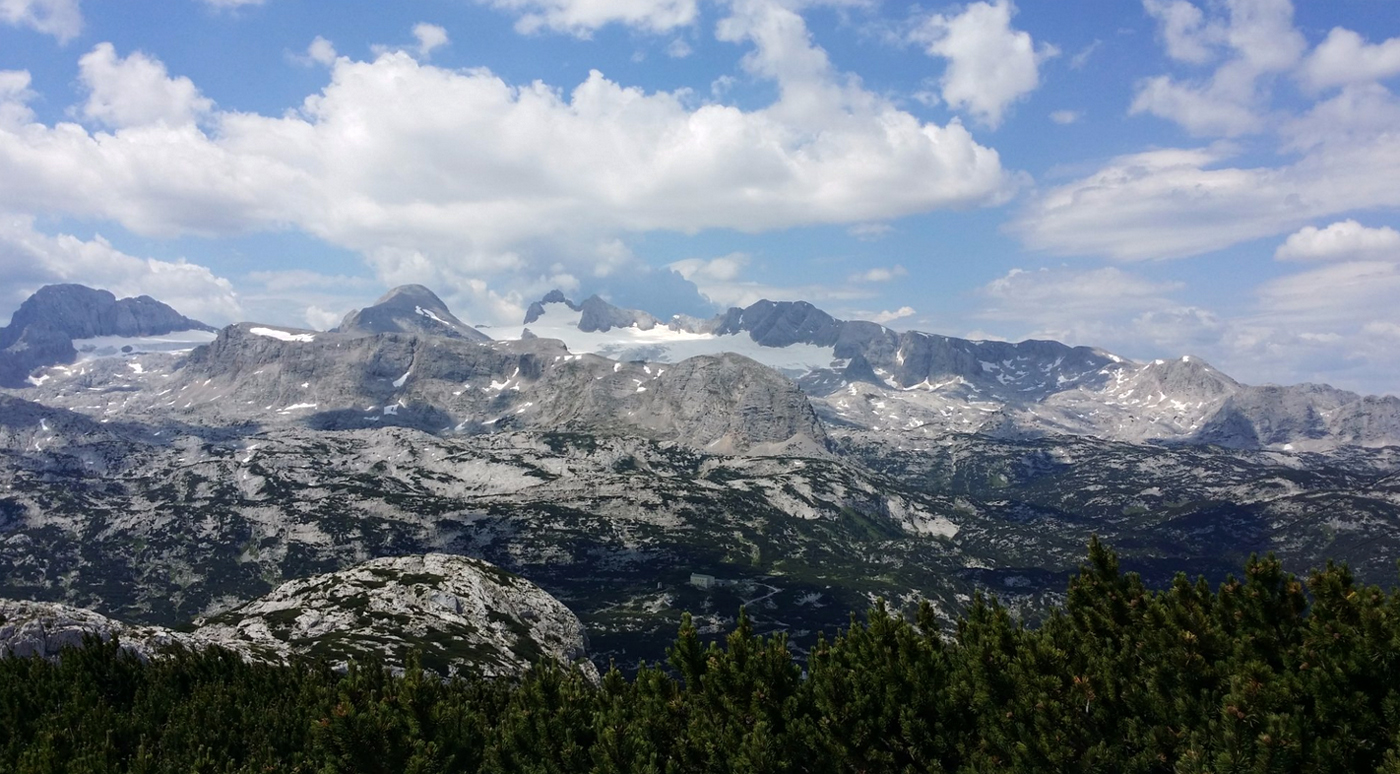 From the station, a picturesque path leads to the famous sightseeing platform of Austria – the “5 Fingers”. It is impossible to lose your way, as there are signs, and the platform is illuminated until midnight and can be seen from a great distance. If you walk and do not turn anywhere, the road will take 20-30 minutes. And you can turn to another observation platform or a small chapel, in addition, you just want to admire the opening views and constantly photograph them.

Please note! If you are going to climb the Dachstein Plateau and visit the “5 Fingers” you should: take sunglasses and sunscreen, warm clothes, comfortable shoes. It is always colder in the mountains than down in the city, and there are often cold winds. By way of comparison, when it’s +30 °C in Halstatt, it’s usually +16 °C up there.

Admission directly to the observation deck “5 Fingers” in Austria is free, you only have to pay for the cable car ride. Tickets are sold at the ticket office, and you can pay by card. 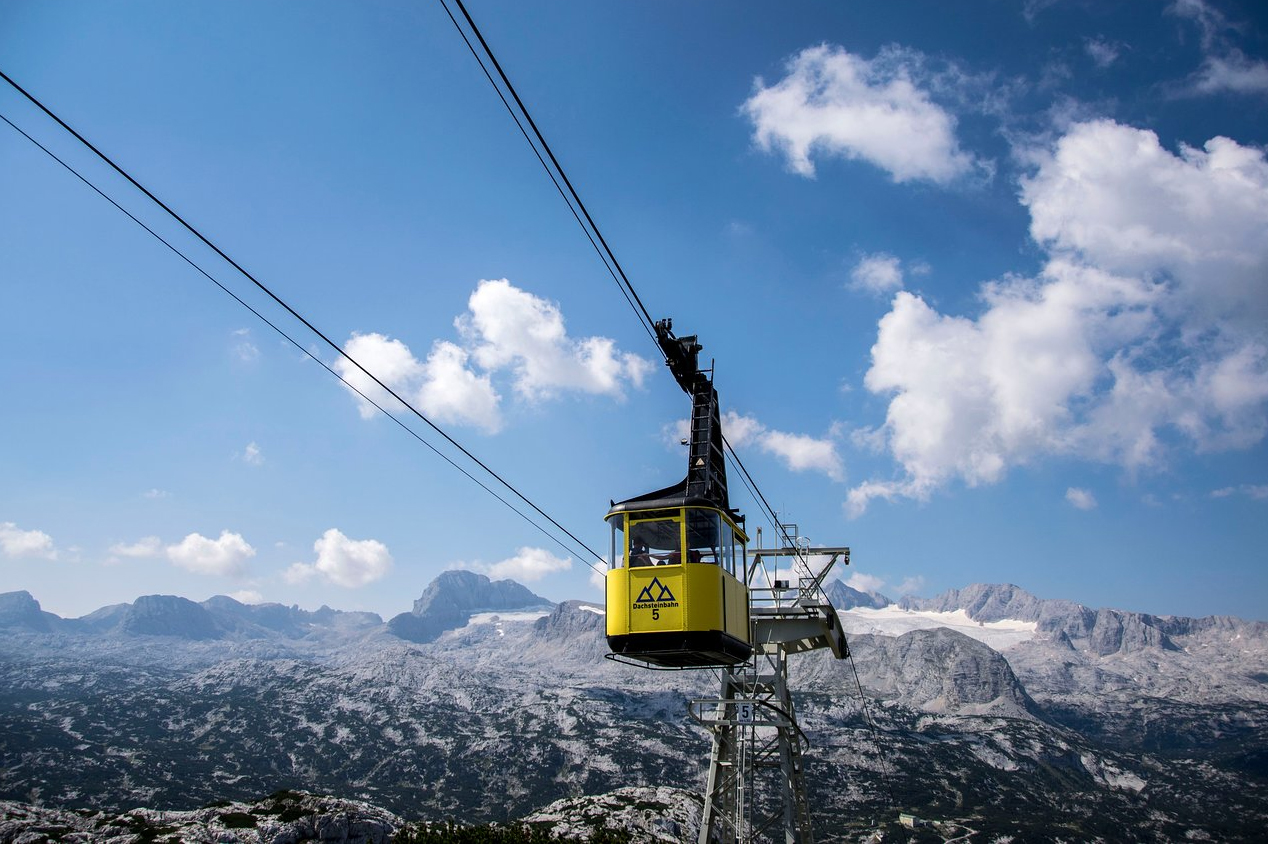 The time spent at the lift site is limited by the opening hours of the cable car, which depends on the time of the year and the days of the week. Current ticket prices and elevator schedules are always available on the official website: dachstein-salzkammergut.com/en/.

On a side note! Climb the site “Five Fingers” preferably early in the morning. First, it can be cloudy in the afternoon, even if it was sunny in the morning. Secondly, there are a lot fewer people.

Updated: July 22, 2019 In the Alps, near the southern slopes of the Nordkette ridge, there,…

Kaprun, a ski resort in Austria, enjoys increased popularity among similar vacation spots of the European…

Updated: 1 Mar, 2019 The Grossglockner is a high mountain road in Austria that has become a popular…

Experiences. A self-guided ascent to the Five Fingers in the Austrian Alps 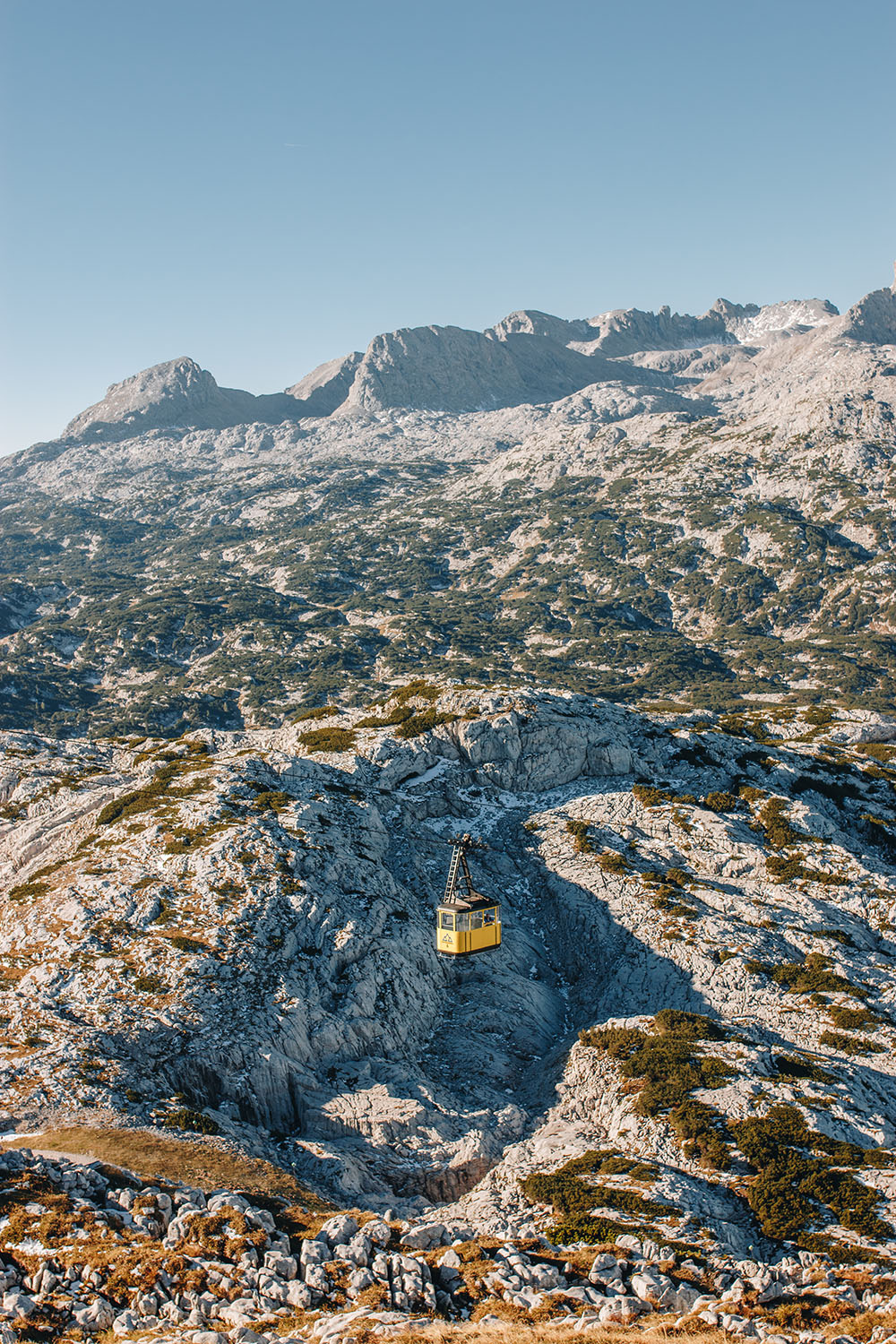 Yulia Vlasova, a photographer from Moscow, travels a lot and brings back incredible pictures and interesting stories from her trips. We have already published Yulia’s report about her trip to Dagestan. This time the girl told 34travel about the difficult but very inspiring climb to the “Five Fingers” lookout, which is located at an altitude of 2100 meters in the Austrian Alps. 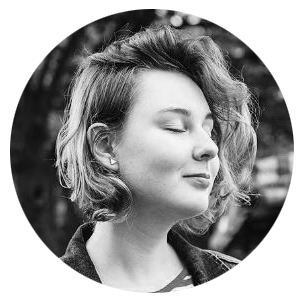 During our hitchhiking trip through Austria, we put a lot of marks on the map: where we absolutely had to go and what panoramas of the Alps we just had to see with our own eyes.

One of the obligatory points of the trip was the observation point Five fingers at an altitude of 2100 meters, which is located on Mount Dachstein. At the foot of this mountain is the town of Obertown. It is quite a popular tourist spot in the Lake District region: such a typically beautiful “postcard view”: a valley among the endless alpine peaks. In general, to be there and to stand with his feet over a precipice of 400 meters we really wanted. Let me clarify: we planned to travel light – and the purse this nuance touched, I’m afraid to say, in the first place.

On a side note: the elevator to the top of the mountain and the observation deck in both directions costs € 30. Given the fact that our three-week trip has just begun, and my girlfriend and I had only € 120 for two for everything, we decided to apply radical measures and get to “Five Fingers” on their own. 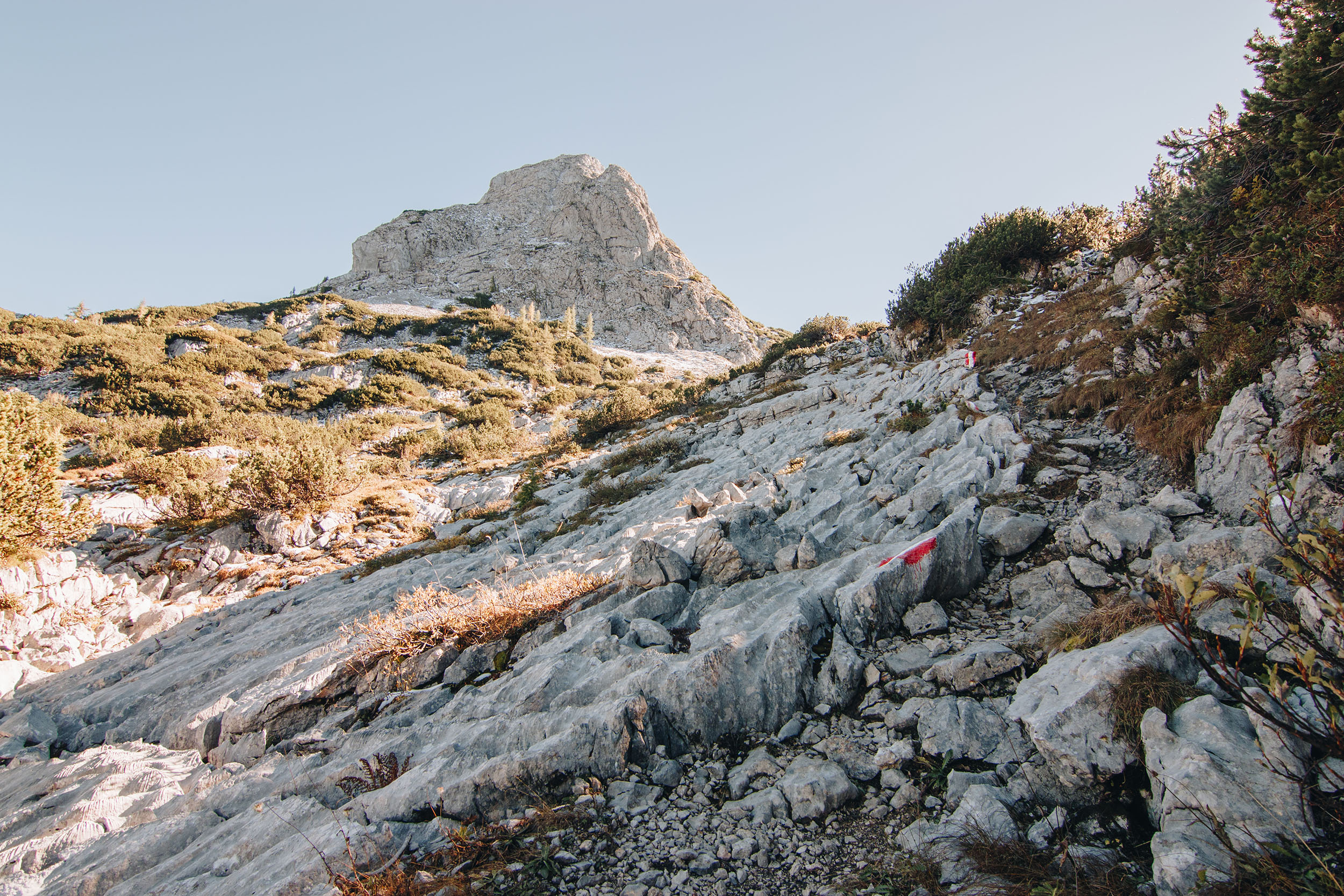 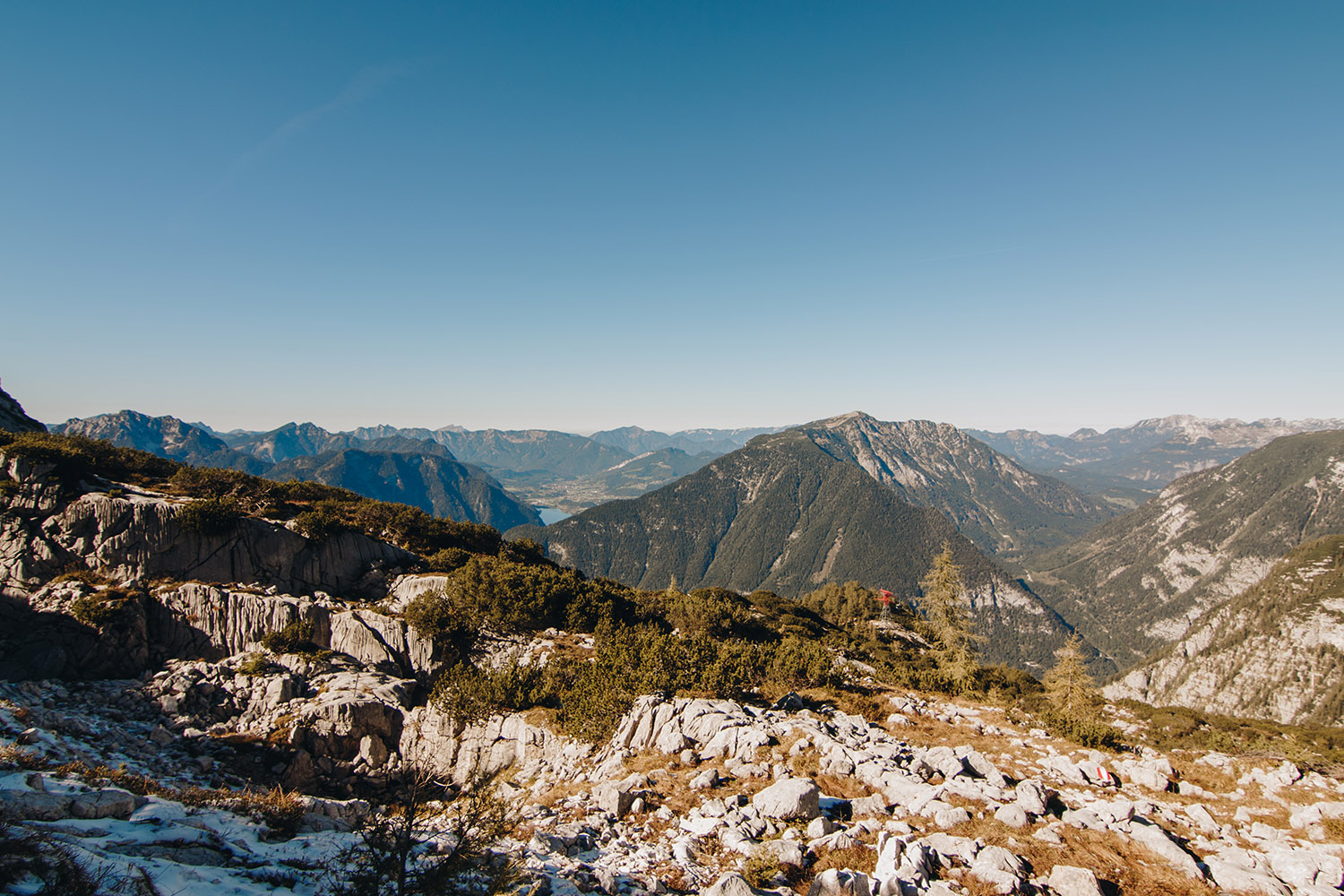 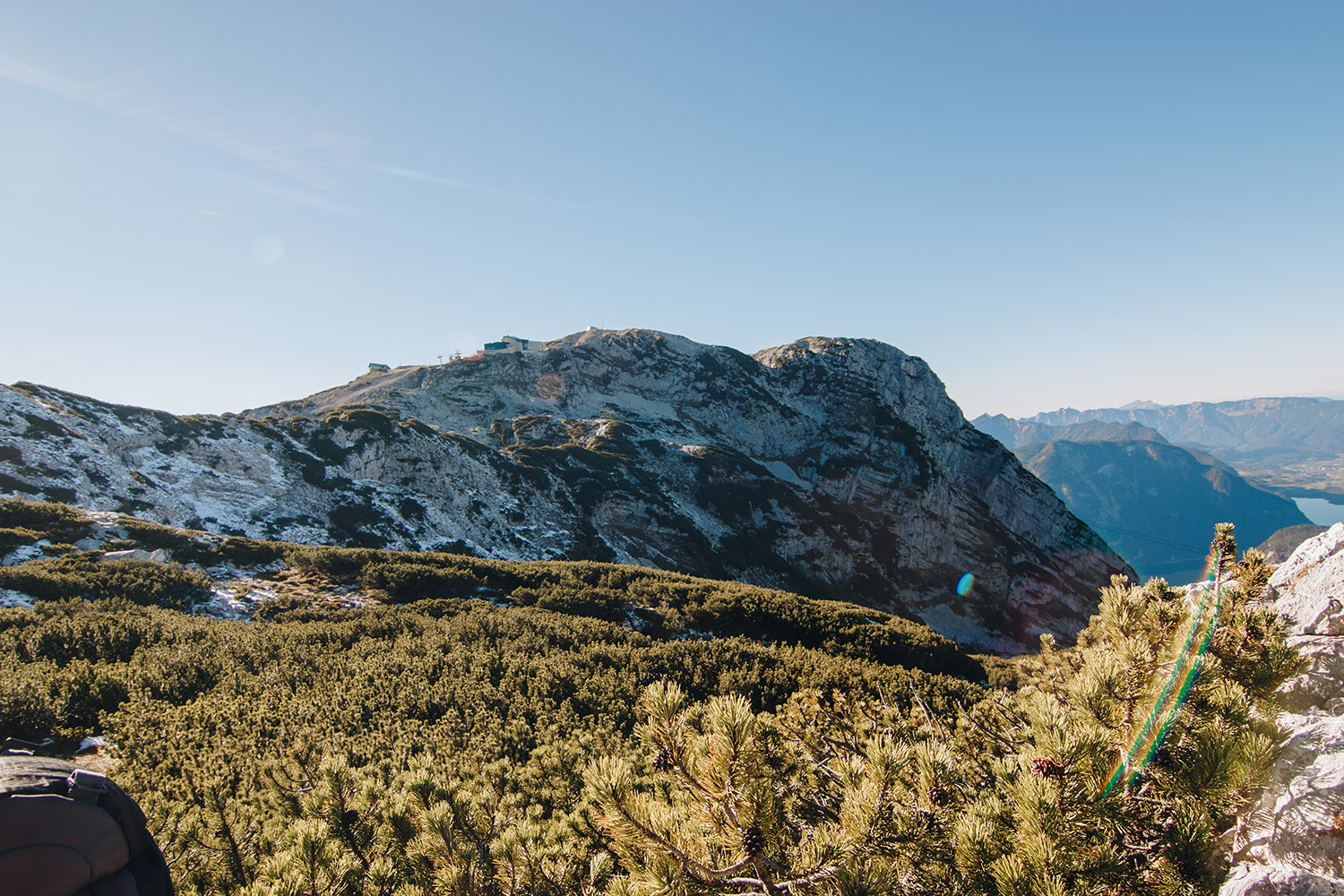 “When we, sweating profusely, reached the first “shelf,” I wanted to be greeted with fireworks and a free voucher for the cable car to the top of the mountain (or at least back). But no.”

To be honest, having chosen route number 665, we did not fully understand what awaited us on the ascent. The girl at the information center kindly told us that this road is the shortest and most popular, but not famous for scenic views. We thought only about how to get to the top quickly, “and the mountains, they are not ugly,” – ran a running line in our heads.

The cableway has two floors: the first station, Schönbergalm, where you can visit an ice cave and look at a mammoth, and the second, Krippenstein – the last floor, where all the main tracks start further into the Alps. Based on internal feelings, and, in principle, nothing else, we laid down on the ascent of four hours. We set off smiling and cracking jokes. On the way we met a local grandmother with sticks in her hands – she went up easily and quite briskly, we even had to catch up with her. It seemed that here we had found a company for the next few hours, but granny smilingly waved at us and went in the direction of the elevator.

The trekking route turned out to be really easy. The road itself is paved, with stone steps in places, and there are markings everywhere – go up and enjoy. It took us three hours to get to the first station, not hurrying anywhere, not denying ourselves the pleasure of feeling the mosses, examining the trees and taking pictures of their demonic roots. The weather was as if it was just for us: the blue sky was breaking through the ceiling of the forest in chunks and didn’t let us get discouraged. We were anxious to get to the top.

When we got to the first “shelf,” after sweating profusely, I wanted to be greeted with a salute and a free cable car voucher to the top of the mountain (or at least back). But no. Breathing hard and wet, no one noticed us. We took a break and continued on our way.

I must honestly confess: at that moment I doubted the idea of going further. The clock was reminding us that the day was drawing to an end, and the signpost promised another three hours uphill. But my friend’s feisty tone still shoved us forward. 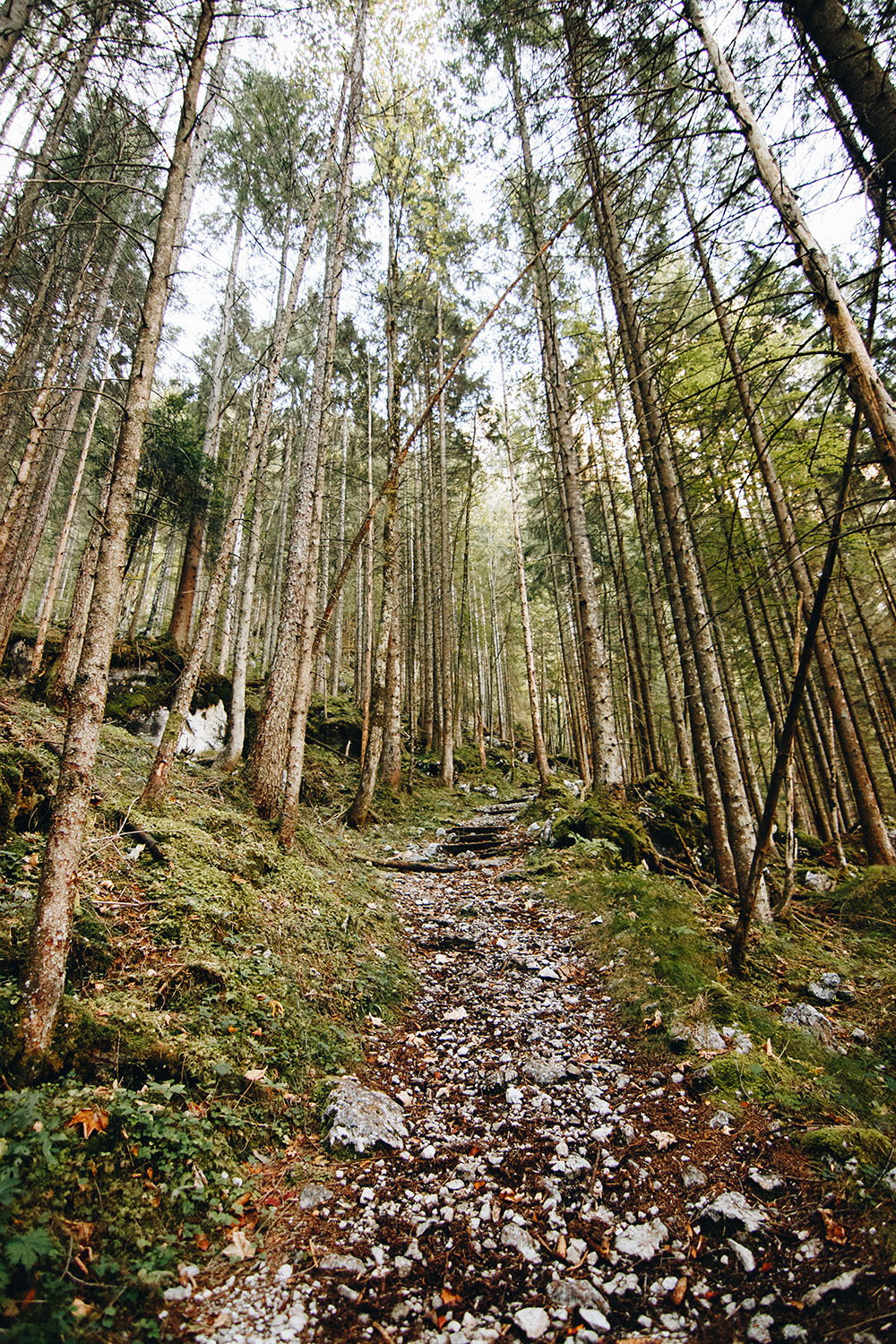 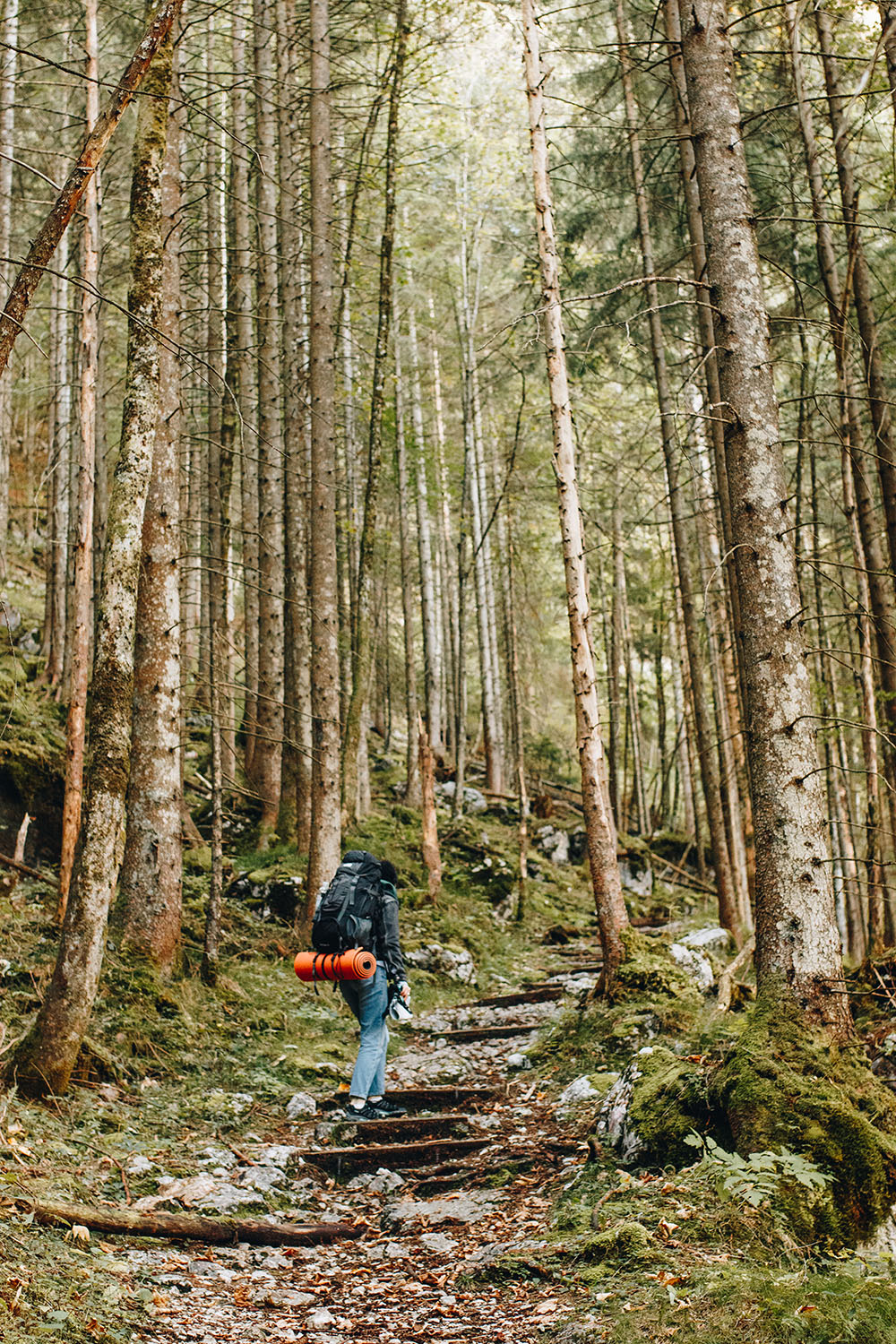 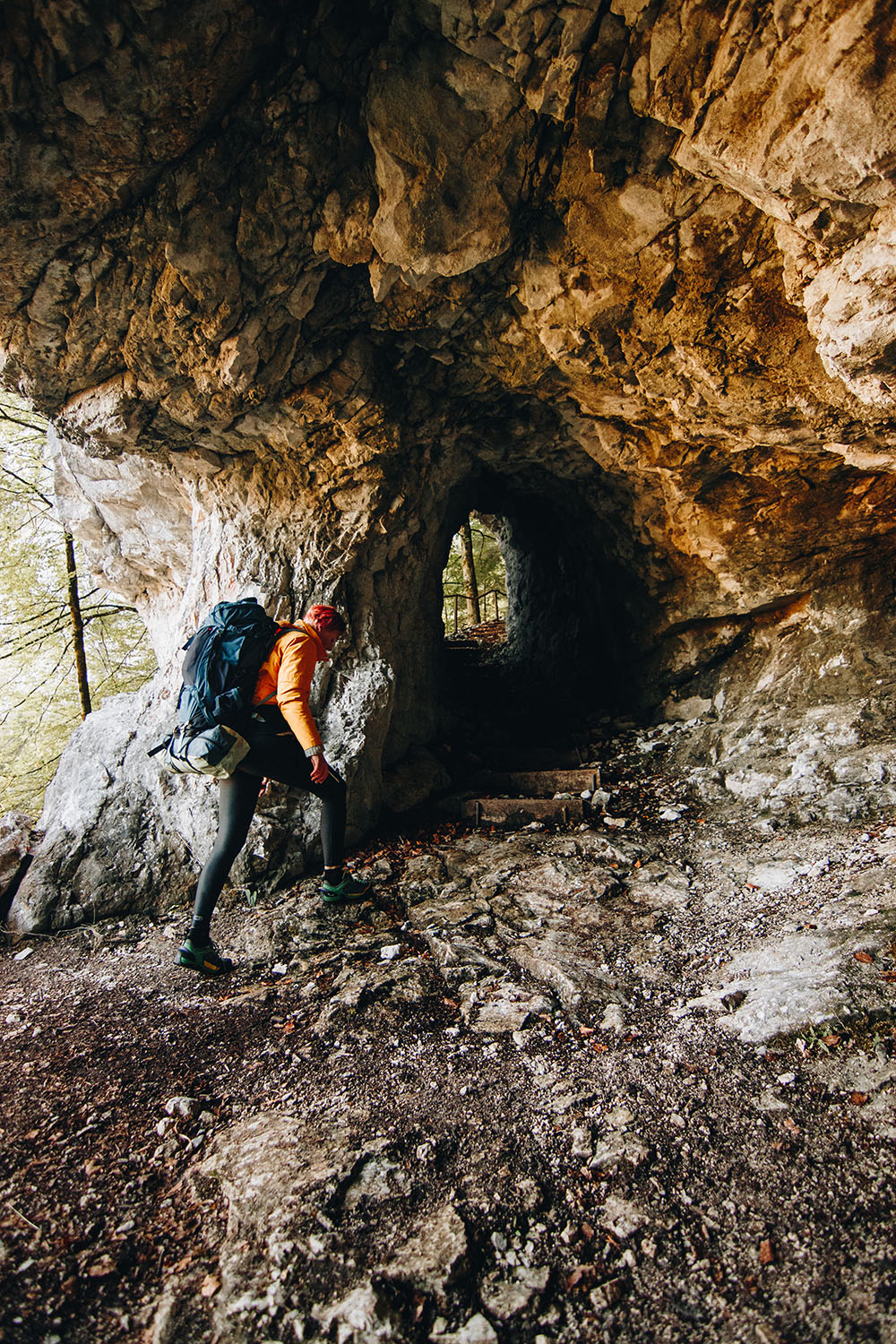 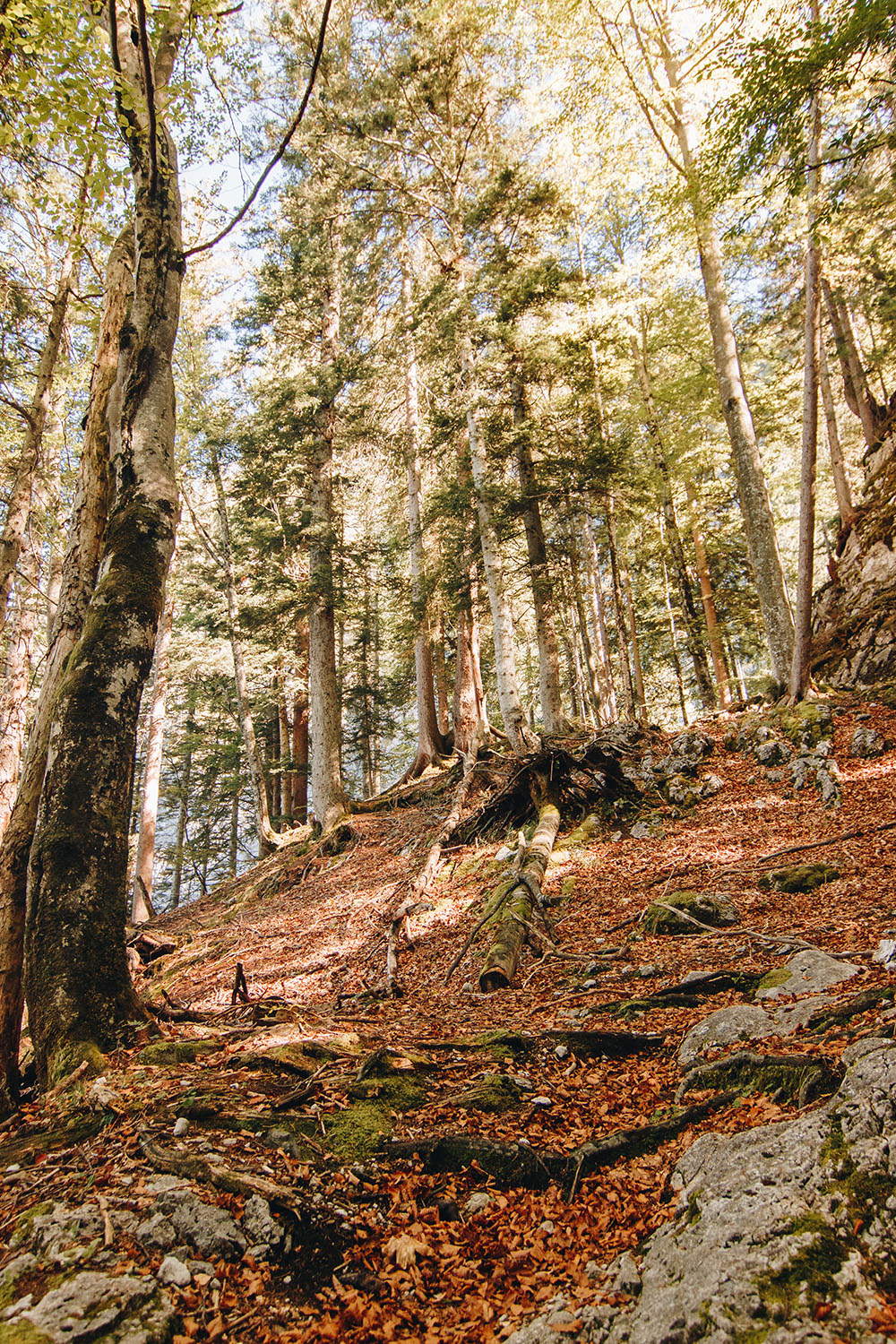 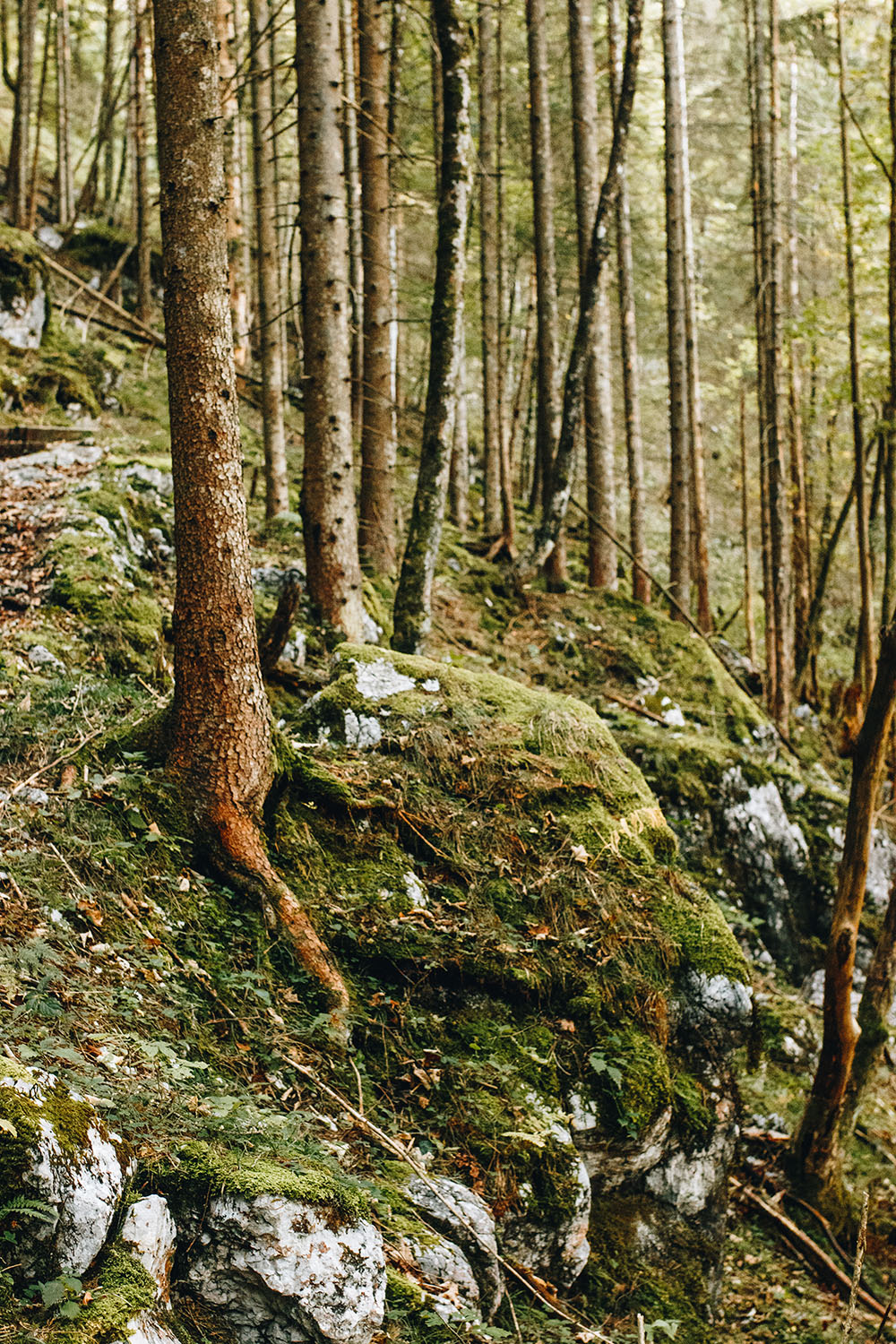 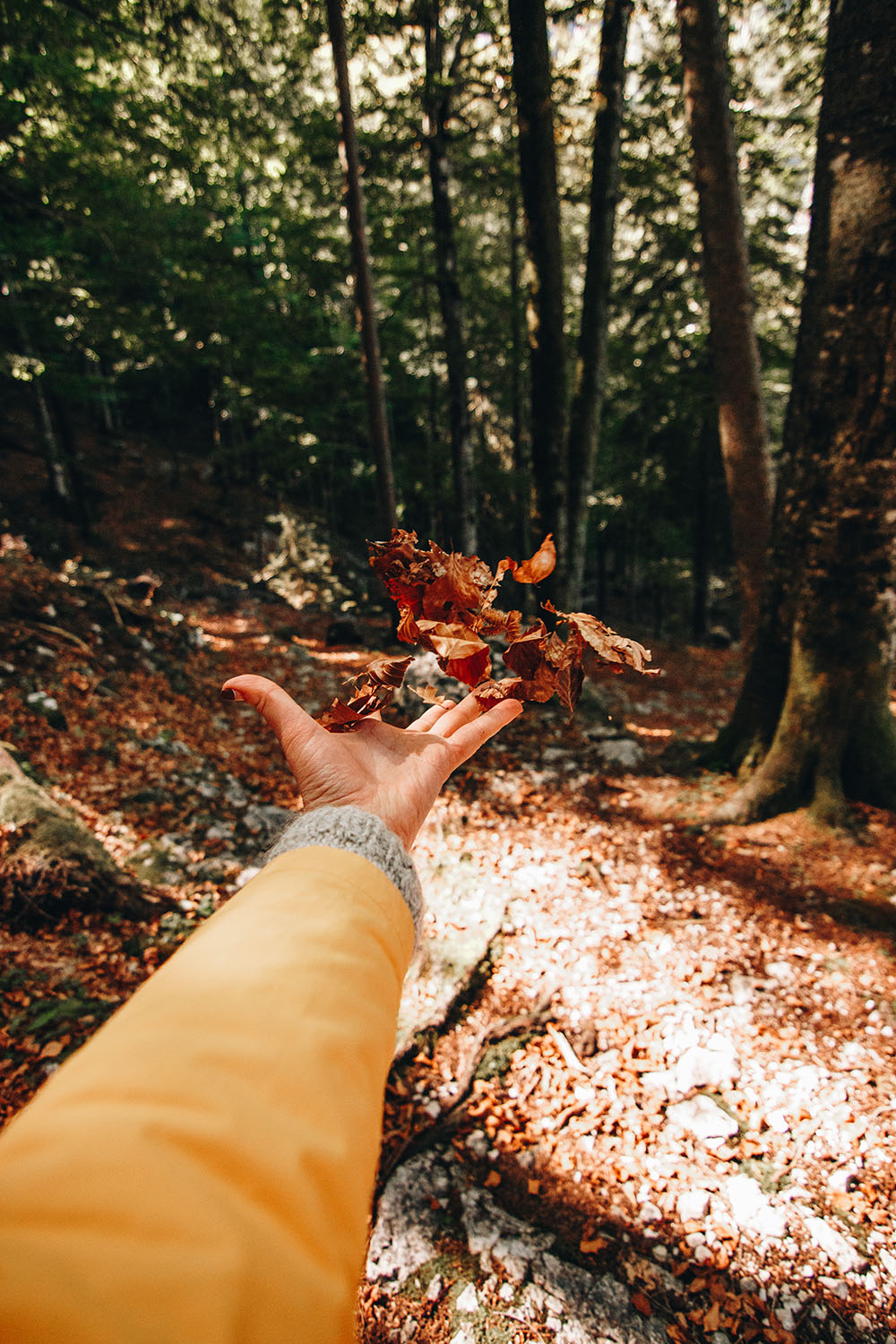 “Did I really go through that?”

The road got heavier. Huge, massive boulders piled on top of each other seemed like many steps of one big pyramid, Mount Dahstein. Overcoming threshold after threshold of the stone ridge and pulling the body up to the next level, one hopes to see a more or less flat section of the route. But behind each such obstacle another tier grew high. You are going towards it with wagging zigzag for a long time and stealthily look to the right – to the top, where a tourist base is standing peacefully, an elevator cabin is slowly pulling to it by a hardly perceptible rod. Sometimes you turn around, almost losing your balance: did I really pass it?

At about the sixth hour I noticeably accelerated and got ahead of Anya, disappearing from her sight. It was hard to watch how difficult it was for her, totally unprepared, to walk for the first time such a route with a heavy backpack and without the certainty that the end of the path would still be.

You know, in that moment the body, seized by a kind of amok, moved as if by itself, without indulgences or concessions, without instructions from the mind. An obsession – to finish that track – took over my thoughts. When you turn around and see somewhere in the distance the small town where it all began, and you remember that for the last two hours you have been walking alone, that there are no park rangers and hikers here, and the nearest people flicker in the red box of the cable car and do not pay attention to you – you realize the futility of this route in an unpleasant situation. The altitude is about 1,800 meters. We ran out of water and had to quench our thirst with snow.