Florida is a state in the southeastern United States, its largest cities are Jacksonville, Miami, Tampa, Orlando and St. Petersberg.

Florida, the “sunshine state” occupying the eponymous peninsula in the southeastern United States, is often called the American tourist paradise. The western coast of the state is washed by the Gulf of Mexico, the eastern by the Atlantic Ocean. Because of its climate (tropical in the south and subtropical in the north) holidays in Florida are possible all year round – even in the winter months the temperature rarely drops below 19-20°C.

Each coast of the state is different and attracts tourists with different needs. The eastern resorts are particularly popular with surfers and all-day carefree fun. The beaches of Miami, Daytona, Fort Lauderdale, Key West Island are deservedly ranked high in ratings of the best beaches in the world.

One gets the impression that the entire east coast lifestyle is focused exclusively on satisfying the needs of vacationers. Luxurious hotels, a variety of entertainment and shopping centers, clubs, bars and restaurants – all these institutions are ready to serve tourists 365 days a year, 24 hours a day. Moreover, the nightlife of resort towns can compete in richness and brightness with the daytime.

Western beaches – an ideal place for a quiet family vacation with children. A nice bonus to always warm water and safe shallow coastal zone are located nearby wonderful amusement parks, visiting which is always a delight for children.

Florida can delight young holidaymakers not only with the famous “Walt Disney World”, but also with an entertainment and adventure park “Islands of Adventure”. And a visit to the “Wet’n Wild” water amusement park, the “Sea World” marine park or the “Church Street” western show will surely appeal to adults as well.

Nature lovers will enjoy a visit to the Everglades National Park, located on the southern tip of the peninsula. The park is home to many species of waterfowl, as well as cougars, alligators, manatees, and other animals.

Marineland, one of the oldest oceanarium museums in the world, and the amazing Saint Augustine Alligator Farm, famous for its unique zoological collection of alligators and crocodiles, are very popular with tourists. The Seaquarium in Miami, where sea shows with sea lions, dolphins, and orcas are held, is very interesting.

In Florida, there are many interesting museums, such as the Salvador Dali Museum in St. Petersburg, which has one of the largest collections of works of the great surrealist painter, the house-museum of the famous inventor Thomas Edison in Fort Myers, the Police Museum in Miami, Hemingway House Museum and Museum of Wonder on Key West Island.

The real pride of the state is Cape Canaveral, home to the John F. Kennedy Space Center, where US spacecraft and satellites are launched into orbit. Canaveral also attracts tourists with its Museum of National Aeronautics and Space Exploration.

The state’s past is as interesting and diverse as its present. Florida is known as a place of intermingling of different cultures. The original inhabitants of these places were Native American tribes, mostly Semenolians. The 16th century was the beginning of the colonization of the area, and it was the Spanish colonizers who gave it the name Florida after the Spanish Easter holiday of Pascua Florida (“banquet of flowers”).

Later, there were repeated disputes between Spain and England over the right of ownership of Florida, until in 1821 the territory of the future state was occupied by the United States. For many years Florida was a farming state, and it was only in the second half of the twentieth century that the fertile land began to be actively developed.

Modern Florida is ethnically diverse. The state is home to many Latin Americans, making it easy to hear Spanish as well as English. Another result of that multiculturalism is the wide variety of national holidays, customs, music, and foods.

READ
Disneyland in France, history of creation and prices 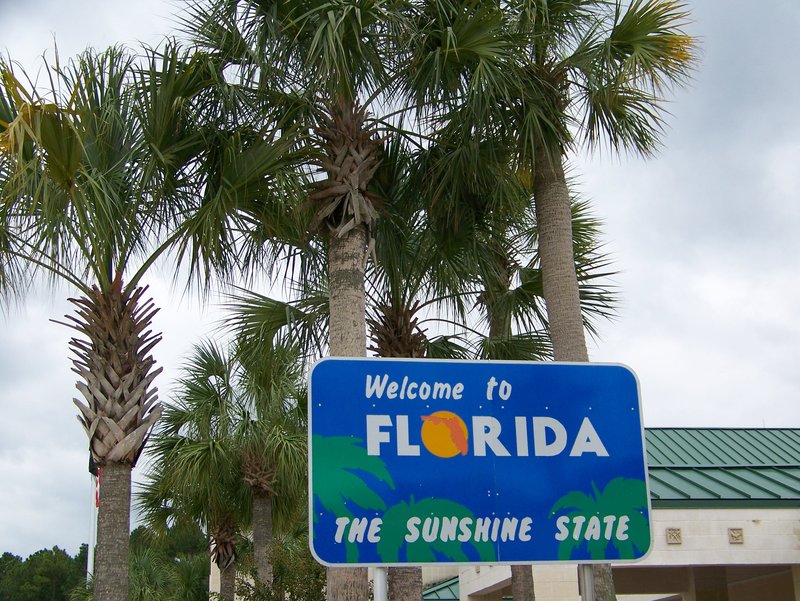 The 50 states that occupy most of the continent, are washed by 3 oceans, and have countless domestic, sometimes contradictory laws, all this is America. The state of Florida occupies a separate peninsula and borders the states of Alabama and Georgia. It is rightfully considered one of the most populous states and ranks as the 4th most populous state.

Optimistic and religious motto of bright and sunny Florida (which we often see in the movies) is “In God we trust”, which means “God is with us” . It reflects the emphasized uniqueness of the Florida peninsula, and the state has many names, from “orange” to “evergreen” to “alligator state. The American state of Florida, in particular, is rich in forests, here they occupy almost half of the entire peninsula. Almost year-round comfortable and sunny weather in addition to generous nature make Florida a great resort. The main areas are the tourism industry and the service industry in general. And thanks to its generous climate, Florida’s lush green groves harvest more than half of America’s citrus fruits.

The Florida Peninsula is washed by the waters of the Atlantic Ocean, so fishing is a separate industry of income. But it’s not just a fishery; it’s also a sporting interest for Florida’s many tourists and residents.

Some of the most famous cities in Florida are Miami, Orlando, Tampa, Jacksonville and St. Petersberg. Each has its own special feature and is proud of it, somewhere it is landmarks, sometimes architecture or even national pride, such as the UNESCO World Heritage Site Everglades Wildlife Refuge.

But Florida cities aren’t necessarily beloved just for such unique places, because Miami is a pilgrimage region for tourists from all over the world. The incredibly beautiful beaches and green boardwalks, luxurious hotels, expensive cars, trim and athletic residents, and wealthy celebrities all create an aura of prosperity, bliss, and pleasure that is simply indescribable.

The Tampa area, which includes the city of Tampa and St. Petersberg, is a complex of scientific, industrial, entertainment, and entertainment venues. The Tampa Bay Area is densely populated, with more than 4 million people according to the latest figures. Tampa has the most balanced development in the entire Florida peninsula – universities, sports stadiums, air and sea ports, museums, shopping centers, everything is in abundance. 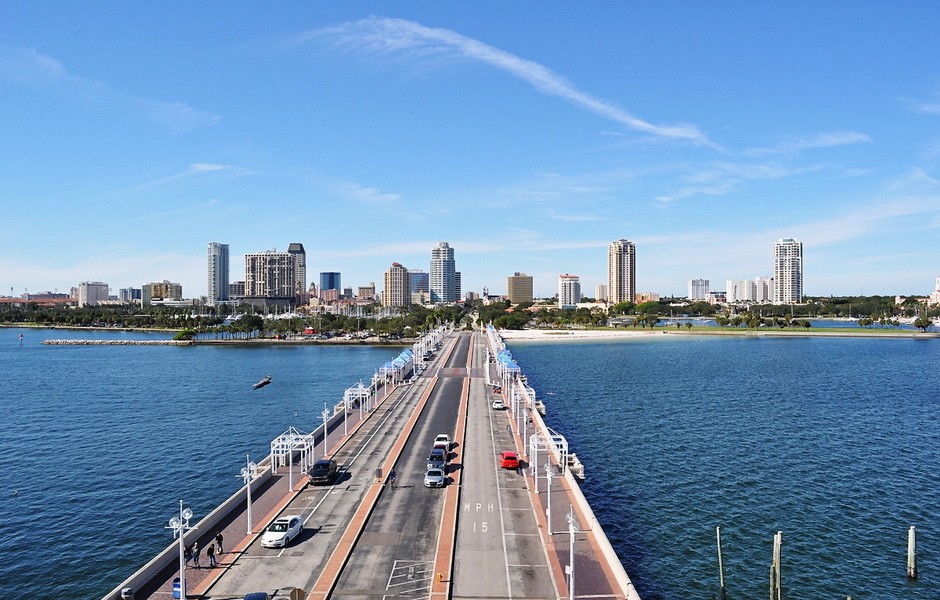 A dry newswire tells us about the humid subtropical and tropical climate in Florida, USA . The average summer temperature here does not go above the sweltering mark and is about 30°C, but the winter figures are even more pleasant 17-18°C. Yes, even in the colder months the temperature rarely drops below 18°C, in the summer the heat is softened by the proximity of the ocean and its fresh breezes. So the banal conclusion is obvious: Florida is a piece of paradise on earth, where it is sunny, happy and comfortable to relax and live. All this beauty is darkened by occasional rains and violent winds, but the hurricane season is very short-lived. The people of Florida, USA affectionately say about the climate about the following: “Our weather can be great or just great!” And after talking to each other, you can understand that even the season of storms and hurricanes, if not loved by them, then certainly very much respected. And even though it looks a little rudimentary, they give every hurricane a name, so it apparently becomes a little more controllable and less scary in people’s minds. All in all, Florida’s climate is very favorable for both tourism and agriculture.

There are 6 time zones covering all of America, with Florida being UTC-5 (EST) in the west and UTC-6 (CST) for most of the peninsula. UTC-6 (CST) is the time zone called Central American Time, and UTC-5 (EST) is North American Eastern Time. For us, this means the difference with Moscow time of 8 and 9 hours on the eastern and western parts of Florida, respectively. For example, if it is midnight(00:00) in Moscow, then in the eastern part of Florida (16:00) the day is about to end, it is 4 pm there. And in western Florida, USA (3:00 p.m.), it’s 9 hours earlier.

The Russian-speaking population in Florida is obscenely large, and how could it be otherwise, because the state has excellent infrastructure and almost a perfect climate. Moreover, the peninsula of Florida has its own “Northern Capital” – St. Petersberg. Most Russian-speaking Floridians live in the major centers and resort towns of Florida on the coast. The leading cities are Miami, Orlando, Tampa and St. Petersburg. Separately, Russian Florida is represented by former residents of central and northern regions of Russia. Yes, there are many Siberians and Muscovites. Many Russians have villas and stay here for a couple of weeks a year, and those who are already Americans work in different sectors of the economy.

Most often they are lawyers, dealers, people involved in the tourism business and immigration services. And the employment covers the entire range of careers from the grassroots in the service industry to senior managers and academics. Russian Florida, aside from its Russian restaurants and stores, is a world of Russian publications, internet blogs and forums, Russian Orthodox churches and synagogues, schools and many other activities that serve as an unbreakable link between Russian-speaking residents of Florida and the rest of America. Watch Russian video about Florida below.

Florida was originally owned by Spain, however the United States purchased the land from Spain in 1819. The land area is relatively small: only 170 thousand square kilometers, making it the twenty-second-largest among the 50 states of the United States. However, in terms of population Florida is the fourth with 19 million people.

Such high interest among people to this area is explained by the fact that by and large this state is a resort, because it boasts a diverse, but mostly warm climate. The closer you get to the ocean, the more tropical the climate will be, and what’s more, everyone knows the city of Miami, which is famous for its beaches and recreation areas, and it is located right in Florida.

The Economy and Finance of Florida, America

However, despite the decent amount of tourists, the “resort” is not at the heart of Florida’s economy. First place among the state’s revenues is the production of citrus fruits – in this area Florida ranks first in America.

But that’s not all the state earns, either. Significant income comes from the production and sale of tobacco products and tobacco, which is grown in the north of Florida. Also worth noting are the sales of sugar cane, which make up a large part of the budget. The latest figures put Florida’s GDP at $776 billion. By comparison, the GDP of Australia is about the same.

The main attraction of the state is the Everglades Park, located in South Florida. Note that this park is home to a huge number of rare and beautiful animals, which are under the vigilant care and protection of the state.