Piazza Barberini and Fountain of Triton in Rome

Piazza Barberini (or Piazza Barberini) is named after the Barberini family. This is a famous, powerful and wealthy Italian family that flourished in the 17th century. The square was built in 1625 by order of Cardinal Francesco Barberini.

Piazza Barberini is located in the historic center of Rome at the end of Via Vittorio Venetto, about 600 meters east of the famous Trevi Fountain.

By the way, just 600 meters northwest of Piazza Barberini you will find the famous Spanish Steps.

The square is famous for its Triton Fountain, the work of sculptor Giovanni Lorenzo Bernini. 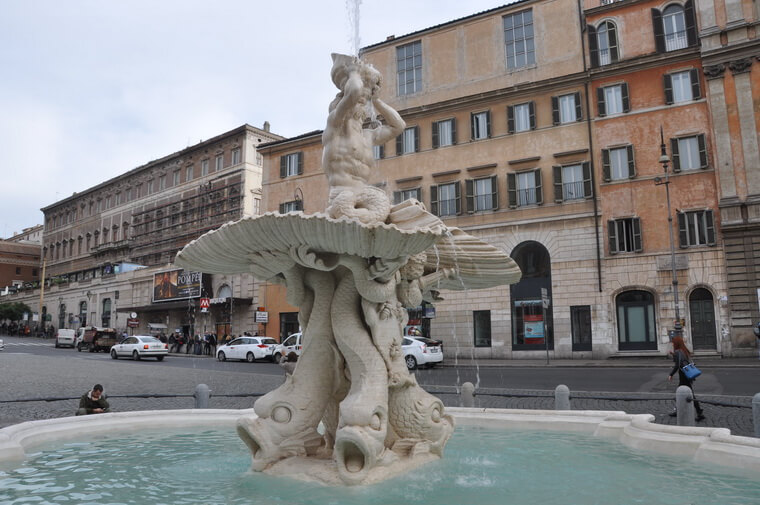 The fountain stands almost in the center of the square. It was built in 1643. Made of travertine, it is one of Bernini’s most famous fountains. The fountain represents four dolphins, which hold with their tails a large bivalve shell. 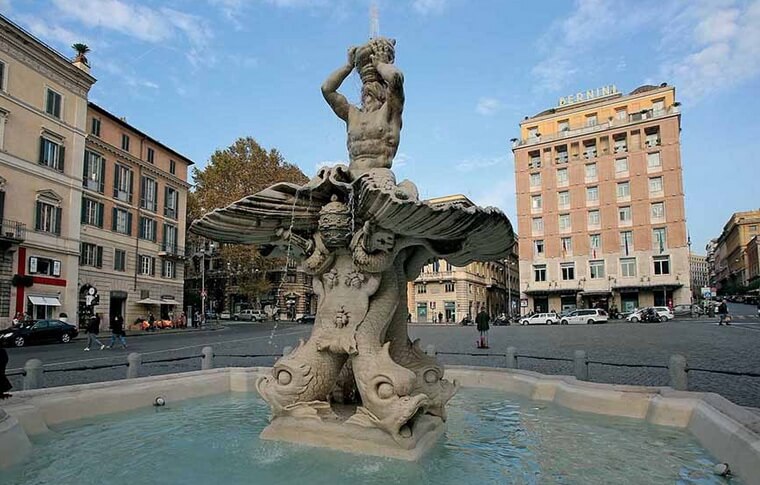 In this shell you will see Triton (God of the Seas), which in turn, as if blowing a stream of water from another seashell.

The Fountain of Bees

The Fountain of the Bees (Fontana delle Api) is tucked away at the northern end of the square. It is considerably inferior in size to the Triton fountain. 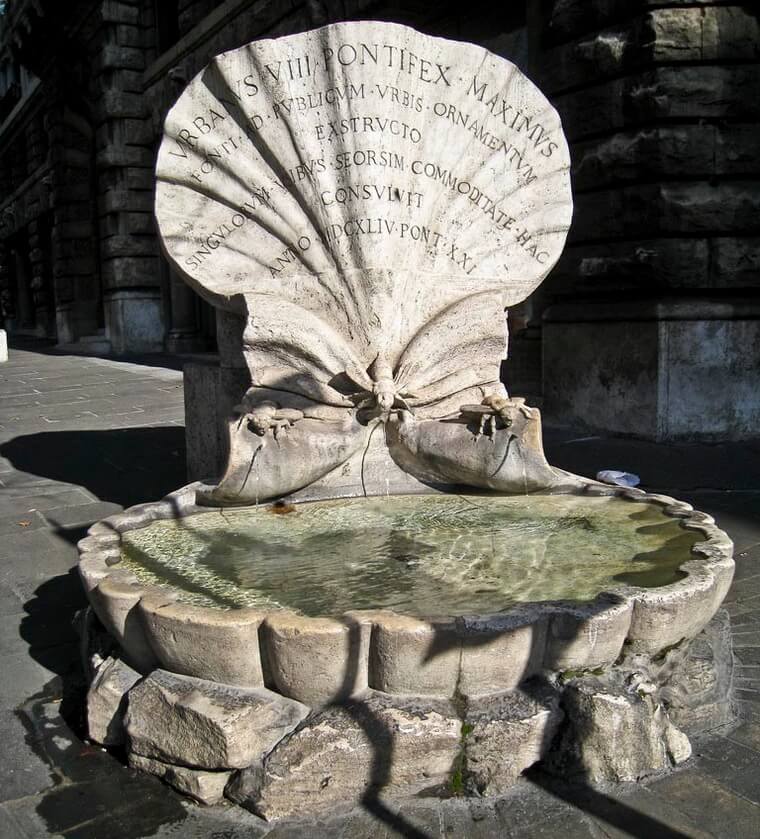 Although it is one of Bernini’s most modest works, it is a must-see. It was built in 1644 in honor of Pope Urban VIII (popularly known as Maffeo Barberini).

The fountain is decorated with bees, which are the emblem of the Barberini family. 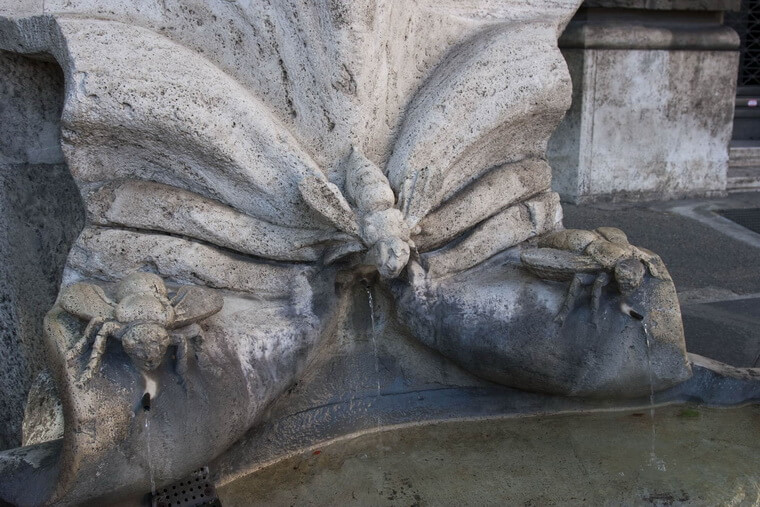 There are three bees in total.

According to legend, bees were used to cure one of the heirs of this wealthy family. They have adorned their family crest ever since. Although historians claim that the bees on the coat of arms came from the real name of the family – Tafani, which means gadfly. However, gadflies were later replaced by bees, because they symbolize hard work.

An interesting fact is that the original purpose of the Fountain of Bees was for horses to quench their thirst there.

Or as it is called in Italian parlance Palazzo Barberini is an imposing Baroque building that now houses the National Gallery of Ancient Art. Built by the same Pope Urban VIII, this mansion was the most elegant and luxurious villa of the period. 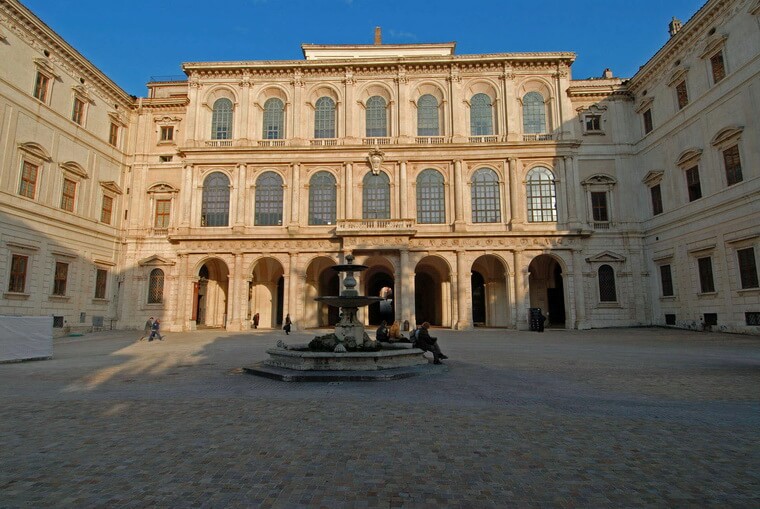 It is situated on the east side of the square.

In 1623, Maffeo Barberini, who became Pope Urban VIII, commissioned the Italian architect Carlo Maderno, who was responsible for designing the facade of St. Peter’s Basilica in the Vatican, to build the estate. Construction began in 1625. But it was completed in 1633, already after Maderno’s death.

In 1949, the Italian government bought the palace and housed the National Gallery of Art, created with donations from several noble Italian families.

The National Gallery of Ancient Art features more than 1,400 works of art by famous artists from the thirteenth to the eighteenth century. You will see works by Titian, El Greco, Caravaggio, Tintoretto and Raphael.

One of the most remarkable rooms is the oval salon, which occupies the entire height of the building. 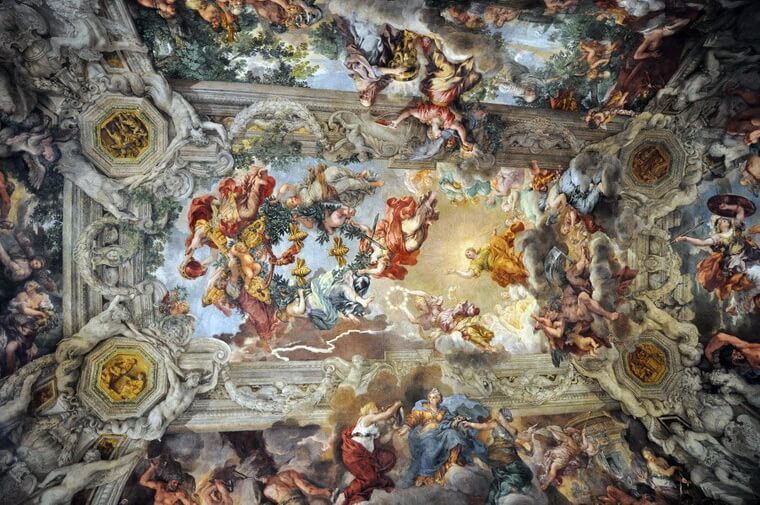 An extensive fresco by the Italian Baroque painter Pietro da Cortona adorns the ceiling here. It represents the Allegory of Divine Providence and the Power of Barberini. 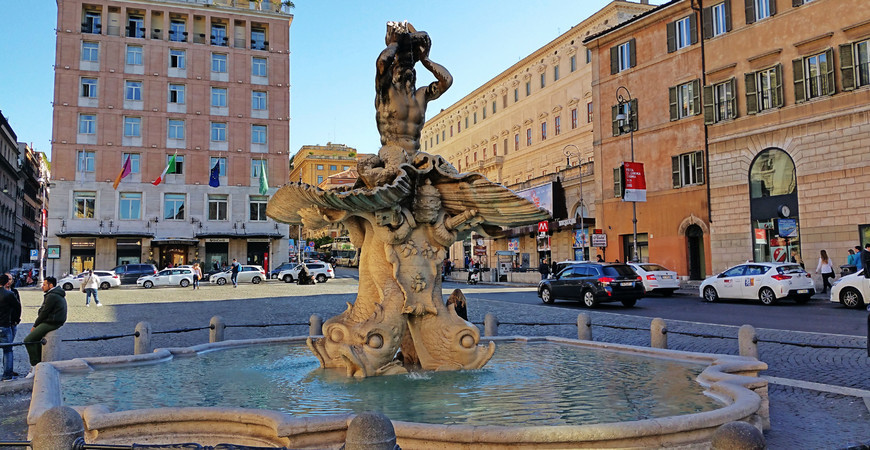 The Tritona Fountain, located in Piazza Barberini, near the palace of the same name, is one of several fountains created by the great Italian architect and sculptor Giovanni Lorenzo Bernini in Rome. It is among the outstanding architectural and sculptural objects of the Eternal City.

The fountain, built in 1642, was commissioned by Pope Urban VIII, who belonged to the noble family of the Barberini. In 1627-1633, he built a palace on the Hill of Quirinale for his family. Once the construction was finished, the square around the palace began to be refurbished. Today both the palace and the square bear the Barberini name.

The work on the ensemble of the new square is entrusted to Bernini. The outstanding master creates not just a fountain, but a true masterpiece that has survived the centuries and is still considered one of the best examples of fountain art in the world.

As one of the creators of Baroque sculpture, Giovanni Bernini executes the Triton fountain in Baroque style. He refuses the established standards and stamps of fountain art by that time, presenting the audience with a completely innovative creation. Fortunately for us, Pope Urban VIII turns out to be a man not alien to the new and approves the project despite numerous criticisms.

Berinini takes the idea for his fountain from the popular Renaissance poem Metamorphoses. Its author, the Roman poet Ovid, inspired by the myth of Triton, son of Poseidon, god of sea, who is able to calm the raging sea with his horn-shell.

The architecture of the fountain

Triton becomes the center of the composition of Bernini’s new creation. Instead of a bowl filled with water and a monolithic pedestal, which by that time had become a classic of fountain art, the sculptor offers an unexpected solution.

He places the figure of Mighty Triton between the open shell shutters into which flows water blown from his mythical horn (as a horn the son of the god of the sea uses the seashell). This composition, the “King of the Baroque”, as Bernini was called, is set on the tails of four fierce dolphins, which gives the entire sculptural group the lightness and elegance characteristic of the Baroque style.

Following the practice adopted at that time of immortalizing the name of the owner on the structure, Bernini places among the dolphins sticking out of the water the papal tiara and the coat of arms of the Barberini family, representing bees, whose honey, according to legend, cured of a severe illness of one of the heirs of the family.

The Triton Berinini is distinguished by its extraordinary plasticity and dynamism, emphasized and enhanced by the flowing streams of water. It is no coincidence that for the realization of his idea, which has complex and bizarre forms, the famous sculptor chose a material that is characterized by ease of processing – travertine. This rock was widely used in construction back in ancient Rome.

Facts about the Triton Fountain

The Triton Fountain, like other fountains in Rome, feeds the aqueduct Aqua Felis. At the time of its opening, the Triton was blowing a much more powerful stream of water out of its sink-hill than it does now. The noise of the falling water was so impressive that the fountain became known as the Triton Roaring.

According to art historians, the Triton, which pacifies the water element, has a symbolic meaning for Rome, a city that has experienced more than one devastating flood caused by Tiber floods. Thus the fountain became a kind of protector of the Eternal City, bringing peace and quiet to the Romans.

The Triton fountain is the central composition of Piazza Barberini. It looks very spectacular in the evening, when it is beautifully illuminated.

In 2013 a complete restoration of the monument was carried out. After the removal of all lime deposits, the sculptural composition appeared before the Romans and many tourists in the form in which it was conceived by the author – dazzling white.

The Fountain of Bees

In the same square is another fountain created by Bernini at the request of Pope Urban VIII – the Fountain of the Bees. This small fountain, conceived as an extension of the fountain of Triton, was intended to serve private individuals, as the inscription on it says. Horses used to drink from it. It is now a drinking fountain.

The Bee Fountain depicts an open shell, along which three bees, symbols of the Barberini family, descend to the water.

How to get to the Triton Fountain

Bernini’s Tritone is located in the center of Piazza Barberini. It is a historic area of Rome, located between the Salustia Gardens and the Quirinale Hill. Many buses stop near the square, but the easiest way to get to the fountain is by metro – you have to take the A branch to Barberini station.

Located in the historic center, the Fountain of Triton is adjacent to the other important landmarks of Rome. Piazza della Spagna with its famous Spanish Steps attracts thousands of tourists and is only a 10 to 15 minute walk. The Colosseum can be reached in 25 minutes.

Tourists in a car should be very careful. Moving around Rome by car is not easy. Finding a free parking space is very difficult. However, there is a paid covered parking garage Garage Barberini just a 5-minute walk from the Bernini Fountain.

Of course, you can always use a cab service in Rome, such as the international service Uber.

The Triton fountain in Piazza Barberini on video