Château de Chenonceau is one of the most romantic and favorite estates in the Loire Valley by tourists. The ancient château is so popular that many consider it the most beautiful landmark of France. The grounds of Chenonceau are privately owned, but it is open to visitors year-round, and anyone can take photos of the old buildings and the park as a memento.

The history of the estate on the Cher River goes back more than seven centuries. Although the beautiful castle is adorned with a massive donjon tower, it was never intended for military operations. Its previous owners used it for feasts, hunting, and other amusements.

The Chenonceau estate is often called the “Ladies’ Castle” for the fact that the main transformations here were led by women. The erection of the first buildings was under the leadership of the owner’s wife Catherine Bonet. The orchard was managed by the king’s favorite, Diana de Poitier. When Catherine de Medici took power, the park was completely reconstructed, and new buildings appeared near the castle. The widow of Henri III, Louise de Vaudemont, lived for many years on the ChÃ©nonceau estate and wore white until her death in honour of her husband’s mourning.

Today the architectural monument has been completely restored. The light walls of the Château de Chenonceau are a real decoration of the river valley and look very picturesque, while the wing of the building, thrown over the Cher, creates the impression of the castle floating on water. Excursion to the historical estate allows to see the interior of private chambers of French queens and mistresses, to admire ancient furniture, rare Flemish tapestries and paintings.

The castle of Chenonceau attracts guests not only with its magnificent architecture. People come here to see the wonders of landscape design. There are two gardens laid out by Diana de Poitiers and Catherine de Medici, a yew labyrinth and a vegetable garden, which modern gardeners recreated in the traditions of the XVII-XVIII centuries. Moreover, in one of the rooms there is a museum of wax figures, where volumetric portraits of the most famous owners of the luxurious estate are exhibited.

History of the Château de Chenonceau

Since the middle of XIII century the land where the Château de Chenonceau stands now was owned by natives of Auvergne with the surname de Marck. In those days, an old fortress and a small mill surrounded by ditches stood here. At the turn of the XIV and XV centuries, when Charles VI ruled the country, Jean de Marck settled in his estate of the English military garrison. Upon learning of this, the French king ordered all the ramparts and moats around the fortress to be dug up and recognized the rights of the owner of Chenonceau as a proprietor.

In 1512, Thomas Boyer purchased the estate. The new owner served in Normandy as intendant for financial affairs. He was a great admirer of Renaissance architecture and ordered the dilapidated castle to be pulled down, leaving only the distinctive donjon tower. The owner’s initials and his motto were engraved on the preserved building: “Who ever comes here, let him remember me”.

On the site where the mill had stood, a stone base with side towers was erected by order of Boyer. The Château de Chenonceau was completed by Boyer’s wife and when they passed away, their son Antoine inherited the estate. However, he was the master of Chenonceau for a very short time.

In 1533 the estate was taken over by the French King Francis I. The formal reason for this expropriation was financial irregularities allegedly committed during the service of Thomas Boyer. In truth, it was said at court that the King simply could not resist the beauty of the Château de Chenonceau and decided to use the estate for holidays, hunting, entertaining outings and literary evenings.

Thanks to Catherine de Medici, the estate was lavishly decorated. Fountains, park obelisks, sculptures, columns and triumphal arches appeared near the buildings. New gardens and outbuildings were created, and in 1580, a new wing with arches was built over the river.

For a long time the picturesque estate was used by kings, their relatives and favorites, but in 1733 this tradition was broken. The castle of Chenonceau was purchased by the wealthy banker Claude Dupin. His wife remodelled the new property to her taste by arranging a physics room in the building. Under her, the chateau housed a small theater and a fashionable salon, which was visited by many famous people of the time.

In 1864, the manor was taken over by Madame Pelose. The new owner undertook an extensive restoration, trying to restore the Château de Chenonceau to its pre-VII-XVIII appearance. On her orders, the decorative windows and ornate caryatids were removed from the facade, but the wing spanning the waters of the Cher was left untouched.

From 1888 to the present day, the architectural landmark has belonged to the wealthy Meunier family. During World War I, the building housed a hospital for soldiers. And during World War II, Château de Chenonceau lay on the border of lands occupied by German troops and the territory of France, which belonged to the Vichy regime. At that time, inside the building was a liaison office for the French guerrillas.

What can be seen in and around the castle

Upon entering the manor, all tourists cross the long plane-tree avenue that leads out into the open space of the front courtyard. Here is the Chancery building, which was built in the 16th century. To the right of the esplanade stretches a garden, laid out during the time of Diana de Poitiers. In the courtyard, the oldest part of the chateau’s buildings, the heavily reconstructed donjon tower, attracts attention.

The highlight of the Château de Chenonceau is a section of buildings over the Cher River, erected in 1580 under the direction of the talented French architect Androuet Ducerceau. The reflections of the succession of arches in the waters of the river make the already beautiful château even more airy and graceful.

A lift bridge leads tourists to the first floor, inside of which there are many attractions. The magnificent hall of the Guards keeps perfectly preserved tapestries, made in the XVI century, and ancient chests. Tourists are sure to be led through the Green Room, the room that belonged to Diana de Poitiers, and the Chapel Room, which houses elegant sculptures made of Carrara marble. Also on this floor is a gallery with paintings by famous Renaissance artists.

The straight flights of stairs lead up to the second floor of the Château de Chenonceau, where the state room and the chambers, which at various times belonged to French queens and their daughters-in-law, are located. The château kitchen, with its many old copper dishes and roasting spit, leaves a great impression.

Today the wax museum is situated outside the main building. Here you can see images of the main hostesses of the Château de Chenonceau, an elaborate collection called the “Gallery of the Ladies”. The museum also reproduces scenes from the life of the estate, featuring famous characters from French history.

Next to the old buildings there is a reconstructed 16th-century farm, vegetable garden and flower garden, where flowers are grown to decorate the castle grounds and rooms. Many tourists love to wander through the labyrinth with caryatids. Exactly the same yew labyrinths were popular in the rich estates of France in the time of Catherine de Medici and served to entertain the owners and guests.

In the park nearby you can see donkeys, wild ducks and pigeons. The luxurious nature of the estate attracts many animals. Squirrels live in the trees in the park, and nutria often come out to the banks of the water-filled moats.

In addition to day tours, the park offers night tours. Travelling to the old music organizes every Saturday and Sunday in July and August from 21.30 to 23.30.

Dogs are allowed in the Chenonceau Parks, but pets must be on a leash at all times. Owners of small dogs are asked to hold their pets in their arms.

Tourists can tour the castle using information from a booklet published in 15 languages. In addition, iPod-based audio guides with videos in 11 languages are available for sightseers. For those who are tired and want to take a break, there is a restaurant and a cheap eatery on the grounds of Château de Chenonceau. And there’s a store outside the main building that sells souvenirs, books, and booklets on the history of the castle.

The Château de Chenonceau is located near the village of Chenonceau in the Department of Endre and Loire. The place is 214 km from Paris and 34 km from Tours.

For those who travel by car the easiest way to the Château de Chenonceau is via the A10 toll highway. Road from Paris by car takes about two hours.

There is no direct train from the French capital to Chenonceau, and therefore have to get with change. At first, from the Paris station “Gare Montparnasse” go to the station “Saint-Pierre-des-Corps”, located 4 km from Tours. This trip takes about an hour, and the interval between trains is 1.5-2 hours. Then transfer to the local electric train and within 25 minutes to the station “Chenonceaux”, which is located near the entrance to the castle grounds.

If the interval between the train from Paris and the local train was too long, it is more convenient to come to the Château de Chenonceaux by cab. In addition, from Paris to the castle you can get by buses with a change in Tours.

French Chateau de Chenonceau in the Loire Valley and its 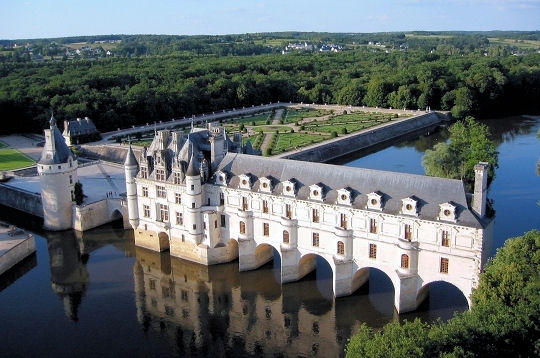 Château de Chenonceau is one of the three most popular Chateaux of the Loire Valley and one of the most beautiful chateaux in France, nicknamed “the ladies’ chateau” because it belonged to two of the most powerful women in France at the time, Diane de Poitiers, mistress of the King, and Catherine de Medici. This 16th-century castle is one of the most beloved and visited castles in France, the second most visited after Versailles. 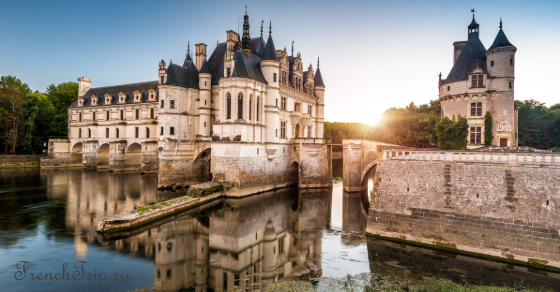 Tickets to the Château de Chenonceau: 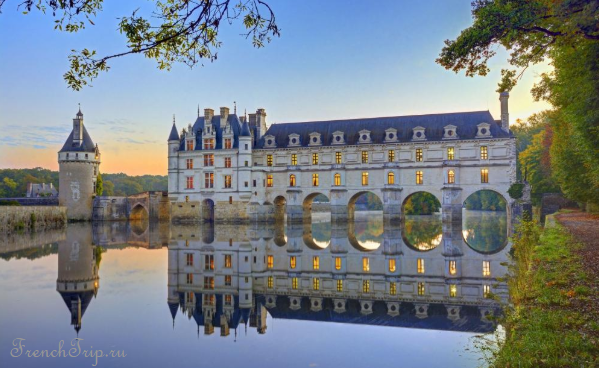 App for iPhone and iPod touch.

Château de Chenonceau offers a free “Meet Chenonceau” app that will give you all the information you need to visit. Available on the App Store.

A complete tour of the castle is available in eleven languages on the App Store. 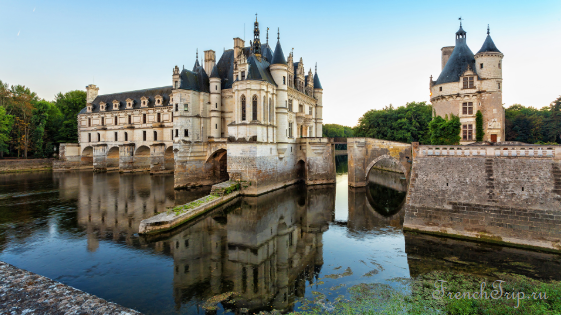 Getting to the Château de Chenonceau:

Château de Chenonceau is located in the Touraine region, on the Cher River, 214 km from Paris and 34 km from Tours.

Near the château is the TER Chenonceaux regional train station, where trains run from Tours (26 minutes, 9 €). 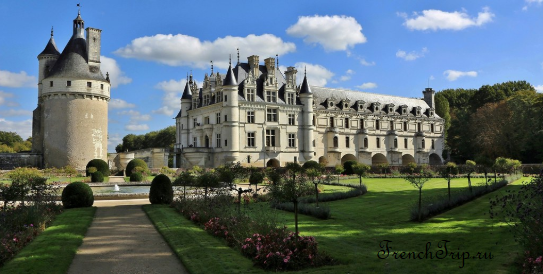 From Paris to Chenonceaux:

The schedule is for a weekday, current in 2016. To see the timetable for the day you want, visit the official website.