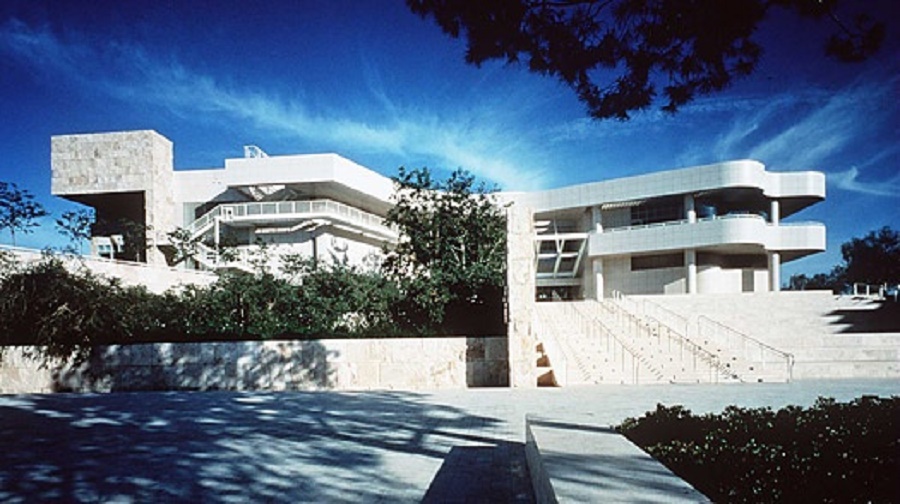 One of the largest art museums in California, the Getty Museum opened to the public in December 1997. The museum is located in a very picturesque place, on one of the hilltops in the Santa Monica Mountains.

The museum’s striking architecture was designed by the famous architect Richard Meyer. The financial cost of the building was about 1.2 million dollars, but nevertheless visitors to the Getty Museum visit all the exhibitions and walk around the wonderful garden completely free of charge.

The museum center was opened thanks to oil tycoon Paul Getty, who in the late 1950s was declared the richest man in the world, and retained this title until his death. Therefore, it is not surprising that Paul Getty left a very solid amount of his multi-billion-dollar fortune for the needs of the museum and the construction of a new building. The Getty Museum is the most famous and wealthy purchaser at auctions and in private collections of works of art by old school masters and ancient sculptors. Museum staff members are the most coveted visitors at prestigious auctions in London and New York.

Architect Richard Meyer was not chosen by chance to design the building for the museum. He is well known for his work on office and public buildings, as well as designs for a number of museum buildings. He has worked on the Museum of Decorative Arts in Frankfurt, the Museum of Modern Art in Barcelona and the headquarters of famous companies such as Siemens and Canon. In 1984 Richard Meier was awarded the Pritzker Prize, the highest award in the field of architecture. Richard Mayer works in the style of American modernism and is a leading representative of the New York avant-garde. One of the “highlights” of his projects that made the master famous all over the world were totally white buildings. 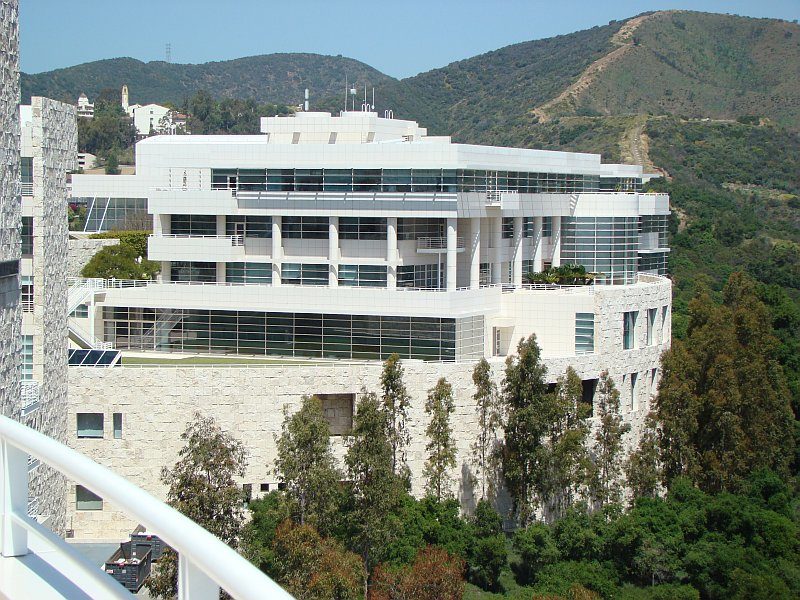 The Getty Museum, perched atop a hill, is a magnificent architectural ensemble. The walls of the Getty Museum Center are faced with golden Italian stone, which was brought from Bagni di Tagoli, a town not far from Rome. It was once this stone that the Romans used to build the Colosseum. 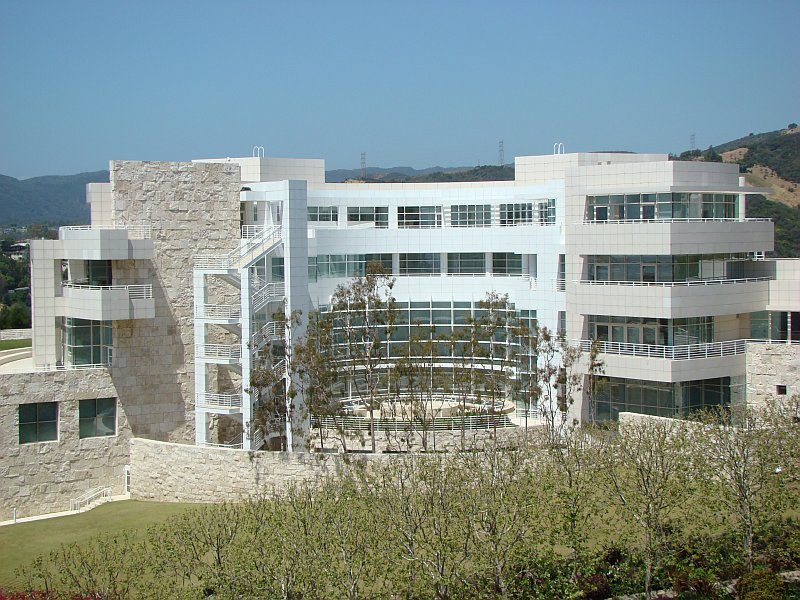 Architecture of the museum

Many of the walls in the museum complex are made of glass in order to maximize natural sunlight. But since the halls of the museum exhibit very valuable works of art, there is a provision for adjusting the intensity of the lighting with light filters or blinds to protect against an overabundance of sunlight.

The grandiosity of the museum center can be judged even by the number of doors; after all, the figure of 3,200 is not small! The buildings of the Getty Museum Center are connected by passageways, which are also used as observation decks, because they offer spectacular views. The marvelous panorama of the Pacific Ocean and the mountain range, the beautiful panorama of Los Angeles and the snowy peaks of the Big Bear ski resort are all visible to the marvelous sightseers. If visitors come to the Getty Museum in their own car, they leave it in the parking lot near the bottom of the hill. At the very top, a computer-controlled cable car takes visitors to the museum. The road up the hill climbs a very steep slope along flowering myrtle bushes and thickets of California peppers.

Finally, arriving at the top of the hill, visitors head up the long staircase to the Getty Museum. In the spacious lobby in the center is a reception desk where information is available in various languages. These days, as in many European museums, the Getty Museum offers an audio course that successfully replaces the tour guide. Such a device in the form of headphones is very convenient because it allows visitors to set the pace of their own walk through the museum halls. 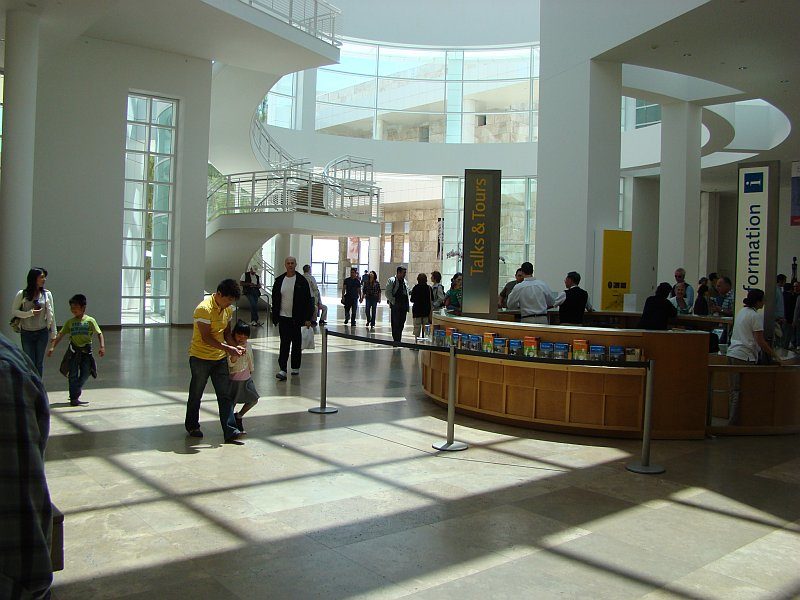 In general, the Getty Museum exhibit space consists of five galleries, which are located in pavilions that are connected to each other and form an enclosed space around a central courtyard.

The exhibit halls of the galleries on the first floors display sculpture, ancient manuscripts and drawings, and works of art by ancient masters. The second floors of the galleries are given for the exposition of various paintings, which are ordered in the halls according to the chronology. 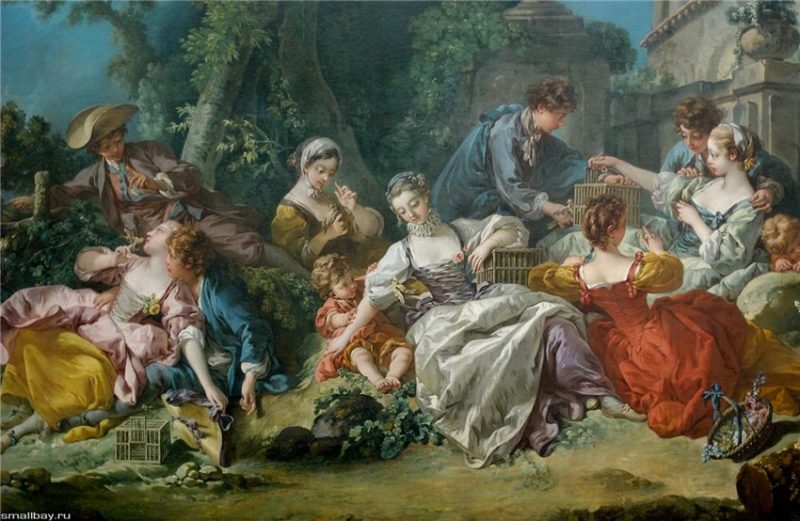 Sculptural compositions can also be seen on the terraces of the second floors. 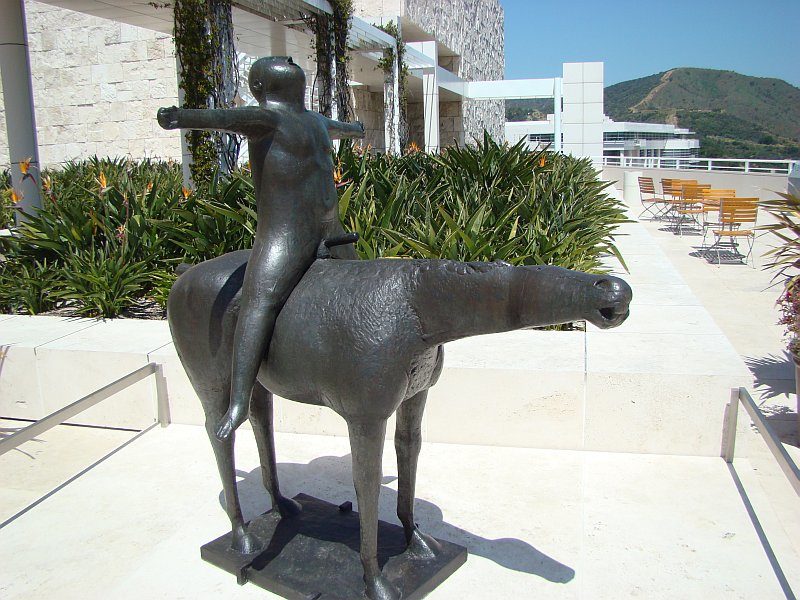 In addition to the exhibit halls and galleries, the Getty Museum’s complex of buildings includes the Environmental Institute, a center for education with various lecture halls and classrooms, often occupied by students who have received Getty grants for excellence in their studies. It is also home to the Institute for Research in the Humanities and the Arts.

Many of the visitors like to come to the Getty Museum with their children for Sunday strolls through the delightful garden. An umbrella can be rented near the entrance to any museum pavilion for protection from the scorching California rays. The garden’s landscaping was designed by artist Robert Irving. There are many ponds, fountains and waterfalls in the terraced garden. 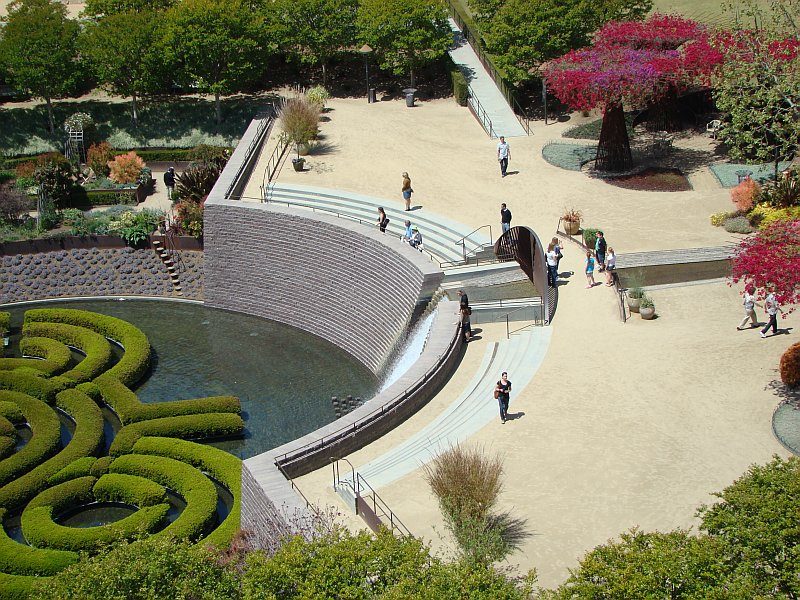 A real mini garden of cacti can be found on the terrace of the garden, and the abundance of flowering plants and trees in the garden sometimes gives the impression that this is the south of Italy.

The museum allows photography and videotaping, has parking and a gift store.

The Getty Center in Los Angeles, which now includes the Getty Museum, opened in 1997. It is one of the largest museum and exhibition centers in the world, receiving up to 1.5 million visitors annually. The center bears the name of its founder, Jean Paul Getty, a billionaire and passionate collector whose collection of art forms the core of the museum. Jean Paul Getty began exhibiting his collections in 1954, which is considered the year the museum was founded.

I think you need at least two musicians to fight. One, even if so versatile, is clearly not enough. ❯❯❯

I did not find a list of paintings in this album.

Located in Los Angeles, the Getty Center, which now includes the Getty Museum, opened in 1997. It is one of the largest museums and exhibition centers in the world, attracting up to 1.5 million visitors annually. The center bears the name of its founder, Jean Paul Getty, a billionaire and passionate collector whose collection of art forms the core of the museum. Jean Paul Getty began exhibiting his collections in 1954, which is considered the year the museum was founded.

The principle of the complex is chronological, it is realized in four pavilions, connected by passages and named according to the sides of the world, the fifth pavilion – an exhibition hall. Each of the four galleries accommodates works of different genres belonging to the same epoch, including sculpture, applied arts and, of course, painting, to which the second floor of each pavilion is devoted.

In order to create the best conditions for viewing paintings in natural light, many of the walls and ceilings of the galleries are made of glass. Light intensity is regulated by light filters, and special blinds direct the light flux to the paintings as desired. Paintings are placed very comfortably for visitors, framed with great taste, have a flawless look, thanks to the skillful restorers of the museum. Visitors are allowed to take pictures of the paintings without using a flash. This is also due to the Getty Museum’s participation in the Google Goggles visual search program. By downloading an image of a painting, you can get online information about the work and a commentary from an art historian.