Gibraltar Airport (sometimes called the Northern Front) is one of the most extreme and dangerous airports in the world. In addition to the fact that its runway abuts into the sea, there are often strong winds. Because of this, the landing and takeoffs here are quite difficult.

But that is not all: The runway is crossed right in the middle by a road. As you understand, cars periodically have to give way (or rather the runway) to the aircraft. Gibraltar Airport is probably the only airport in the world where the road crosses the runway.

Interesting fact – according to a historical TV channel in the U.S., Gibraltar Airport was among the five most extreme airports in the world.

And here is another unusual airport on the island of St. Maarten. There, giant planes fly practically a few meters above the heads of tourists on Maho Beach.

Gibraltar Airport is built in a small British overseas and disputed territory in the southern part of the Iberian Peninsula. The airport is located near the Strait of Gibraltar on the small peninsula of the same name. 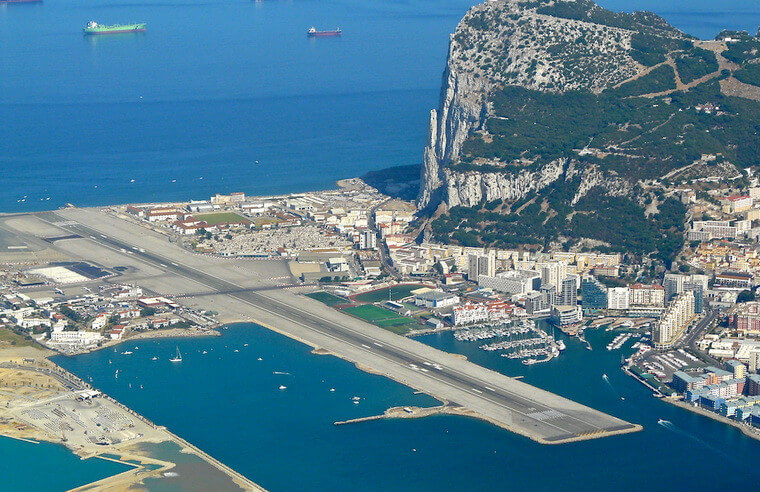 Gibraltar Civil Airport serves the British overseas territory. Gibraltar is a tiny peninsula with an area of only 6.8 km2 .

Although it is a civilian airport, it is actually owned by the British Ministry of Defense.

The airport was built in 1939 at the beginning of World War II on the territory of the racecourse. At that time Gibraltar was a British naval base, and served as a reserve or emergency airfield. But later the runway was extended and enlarged. The runway is now 1,700 meters long. This allows for larger planes. 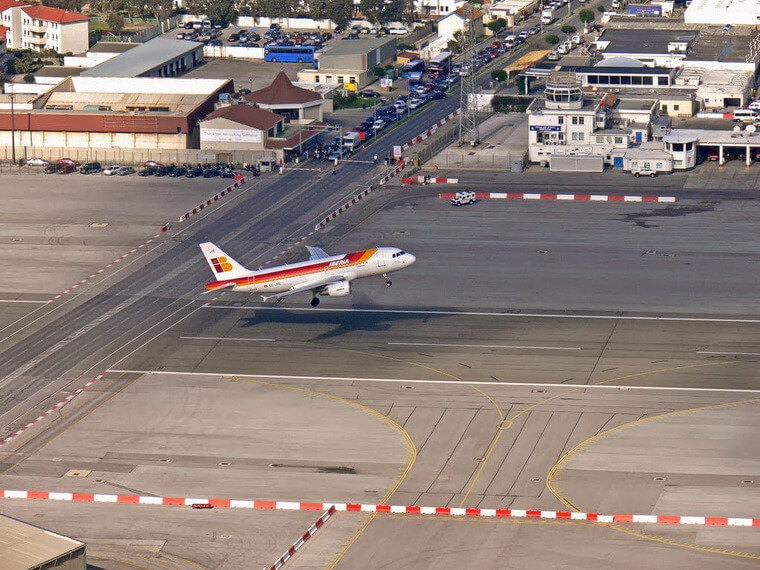 Why does the road cross the runway?

The lack of level space here is the reason why the only runway goes into the sea. But the biggest unusual thing about the airport was the road that crosses it – Winston Churchill Avenue. It leads to the border with Spain.

A couple of small barriers close the car traffic when the plane lands or takes off. But it’s not a very busy airport. There are usually 30-50 flights a week, all exclusively to or from the UK.

Gibraltar Airport now handles about seven planes on some days. Typically, the average time the highway closes to traffic is ten minutes. But there was a case when the passage for cars was closed for two hours. Then a police operation was conducted to apprehend a criminal in one of the planes. 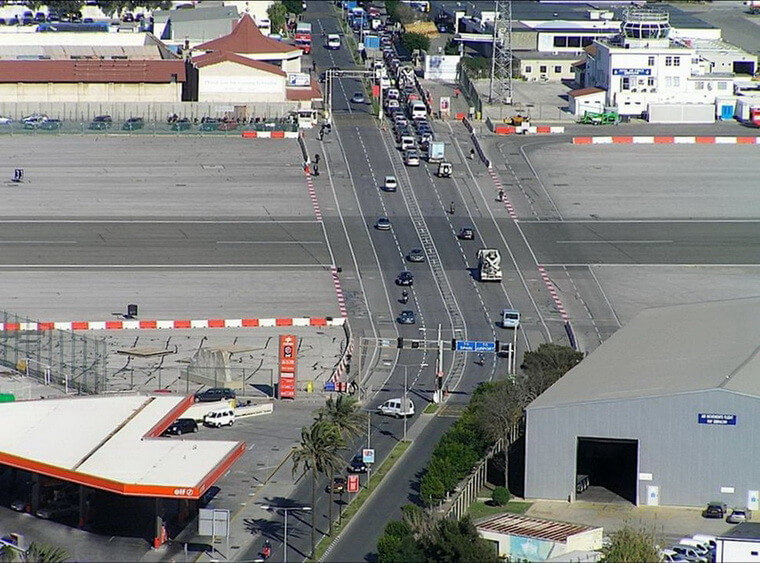 Cars on the runway of Gibraltar airport

If you think you can’t build anything on a small area with very uneven terrain, read about the Henningsver Stadium on a rocky island near Norway. Not only does this stadium lie practically among the rocks, but it also complies with the strict UEFA rules.

Another feature of Gibraltar Airport

Since the 19th century there have been mutual claims between Spain and Great Britain over the ownership of this territory. Up until the beginning of the 21st century, the countries had disputes over Gibraltar. Spain even banned British aircraft from flying over its territory from Gibraltar.

In 2006 all restrictions on flights to Gibraltar airport were lifted, including a ban on flights over Spain and the exclusion of Gibraltar from all EU air transport agreements. In fact any civil flights from all countries to Gibraltar were allowed.

To begin with, there were attempts to organize flights to Spain (to Madrid and Barcelona) and to Morocco (to Marakech and Tangier). But the idea was not a success. Mainly because of the small number of passengers and unprofitability of such flights.

As a result, Gibraltar airport is actually an air route, connected only with the major airports of Great Britain (London Heathrow, Bristol, Gatwick and Manchester).

How long will the road cross the runway?

Naturally, the intersection of the road and the runway has a negative impact on both airport and highway operations. 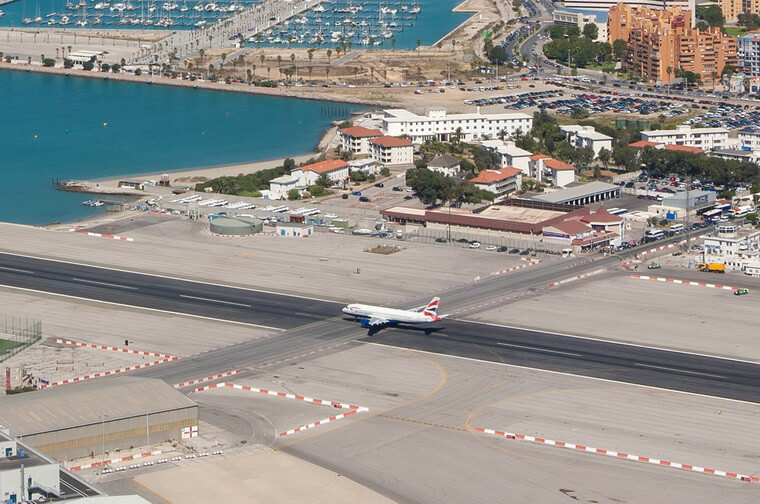 There were plans to build a new road to bypass the airport, and possibly a tunnel under the runway. It took a long time to make the calculations, and eventually it was decided to build a road east of the airport. The work is well under way and will soon be completed. But Winston Churchill Avenue will remain for the passage of special vehicles.

What is so remarkable about Gibraltar Airport, and where did the driveway come from? 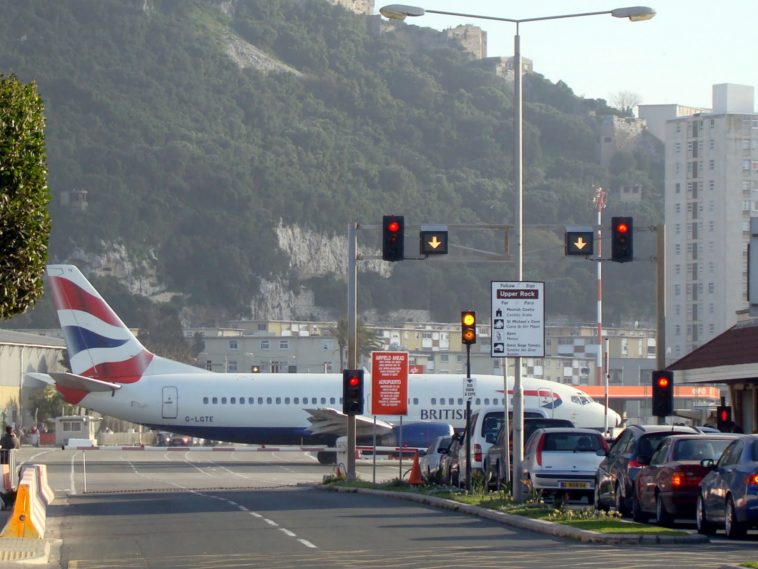 “The Northern Front,” as Gibraltar Airport is also called, is considered the most unsafe airport in the world. The rough takeoff and landing environment is facilitated by the runway breaking right into the sea and often by strong gusts of wind. In addition, the runway is literally pierced by an active highway – cars freeze, waiting to let the planes through.

>> The card works all over the world to pay for any services and travel !

Perhaps that’s why Gibraltar Airport was included in the list of the most extreme airports in the United States with the easy hand of a historical TV channel. 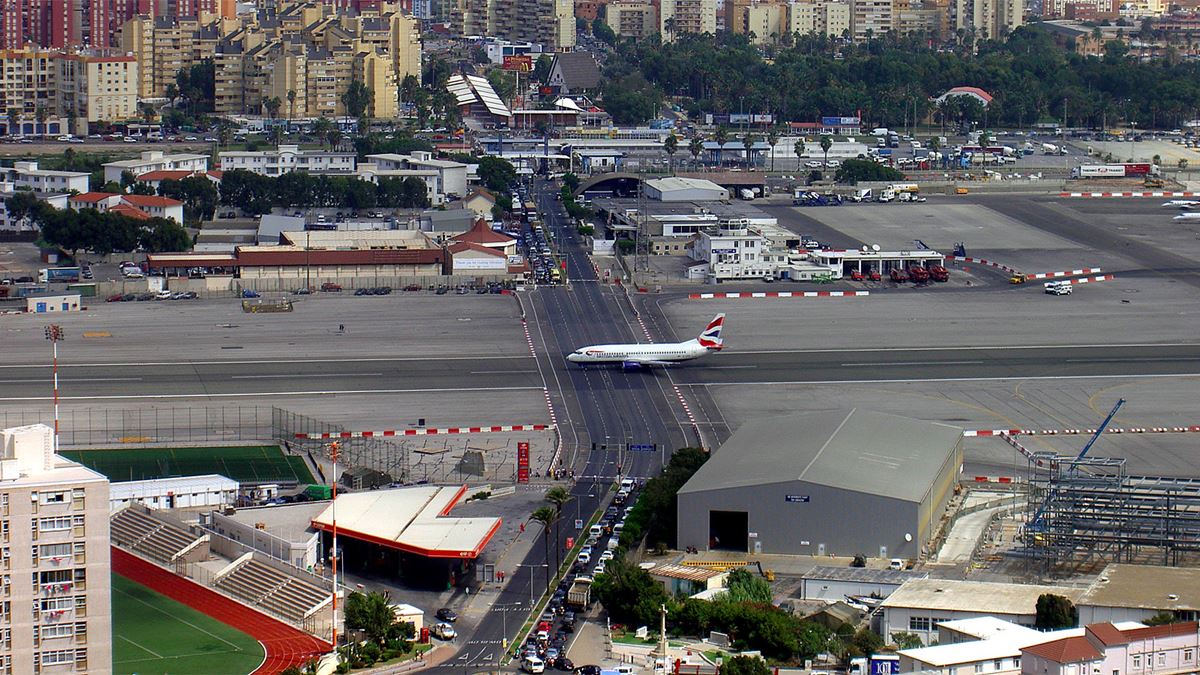 Gibraltar is a very tiny peninsula of less than 7 square kilometers, including the rock and isthmus. Although the airport located there is listed as a civil service for the British Overseas Territories, in fact it belongs to the British Ministry of Defense and is used for the strategic needs of the country. But how did this happen?

The fact is that the airport was built on the territory of the racecourse back in 1939. Then Gibraltar became a military base of the British and served them as a “spare”. Over time, the runway was enlarged and expanded. It is now over 1,800 meters long (which allowed it to accept larger ships).

>> The card works all over the world to pay for any services and travel !

And leaving the sea, and crossing, and 500 meters from the crowded city center is justified by the very scarce space. The sight is especially panic-inducing when looking at screenshots from Google Maps.

Very close proximity to the road 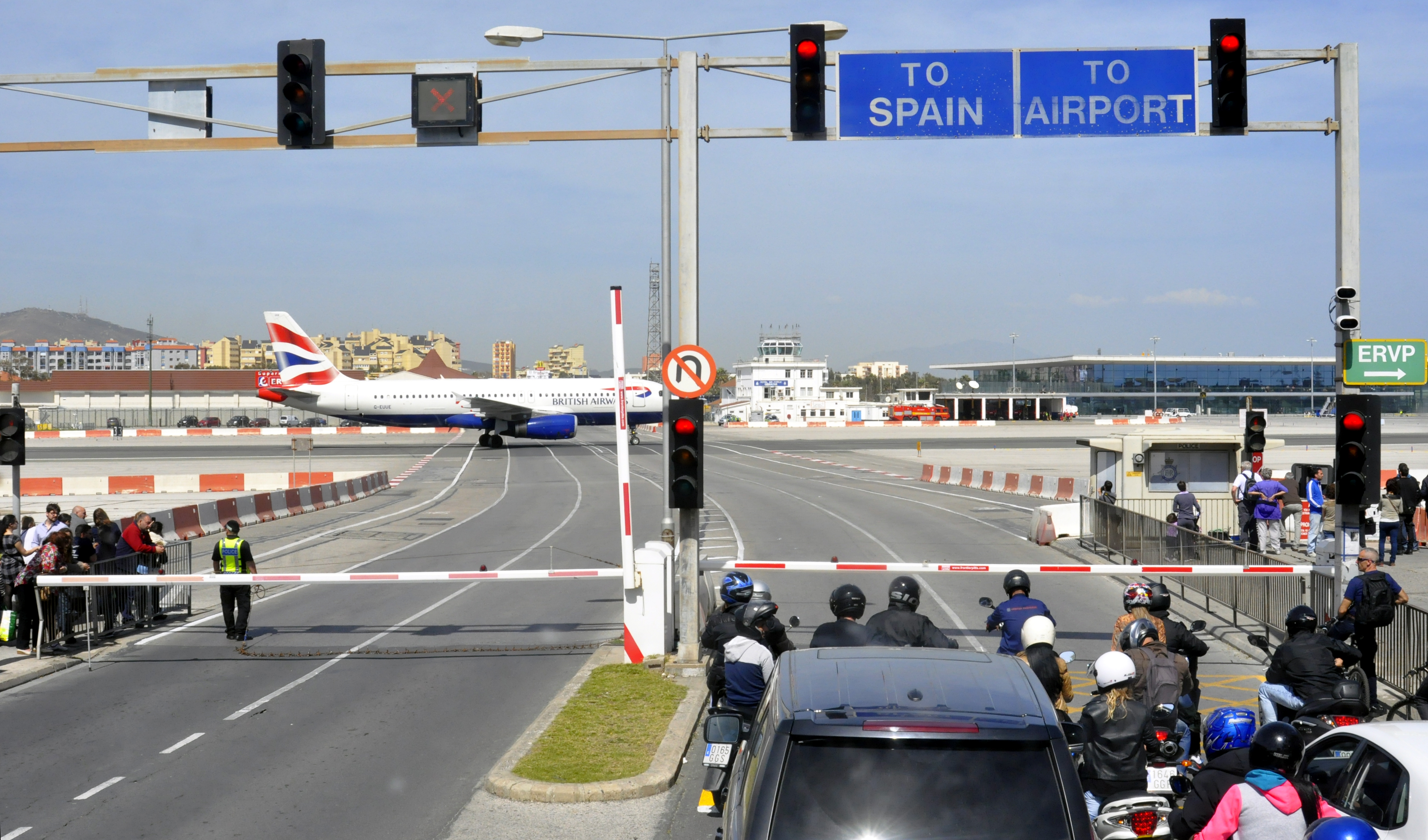 The thoroughfare that crosses the airport is Winston Churchill Avenue, which leads to the Spanish border. This street has become its trademark. Readers invariably wonder who is more uncomfortable? Fortunately, the pilots don’t have to politely pass the snooping cars. A pair of barriers prohibits the passage of cars as the planes begin their movement.

But drivers do not suffer much, because the airport is not very busy. Usually Gibraltar handles about 30-50 flights during the week. Now in a certain period the airport can serve no more than seven arrivals and departures. The most common road closure time by the barrier is ten minutes. Although there was an emergency situation when traffic was stalled for as much as two hours due to the capture of a criminal aboard one of the planes.

Be that as it may, the crossing does have a negative impact on both airport and highway operations. And measures have been taken. There were plans to build a bypass road or dig a tunnel under the runway. The calculations were carried out for a long time, as a result it was decided to lay a new road closer to the east. The work is still under way, with a positive outlook for completion soon. And the Churchill Avenue will not cease to exist, but will move to another status – for special vehicles. 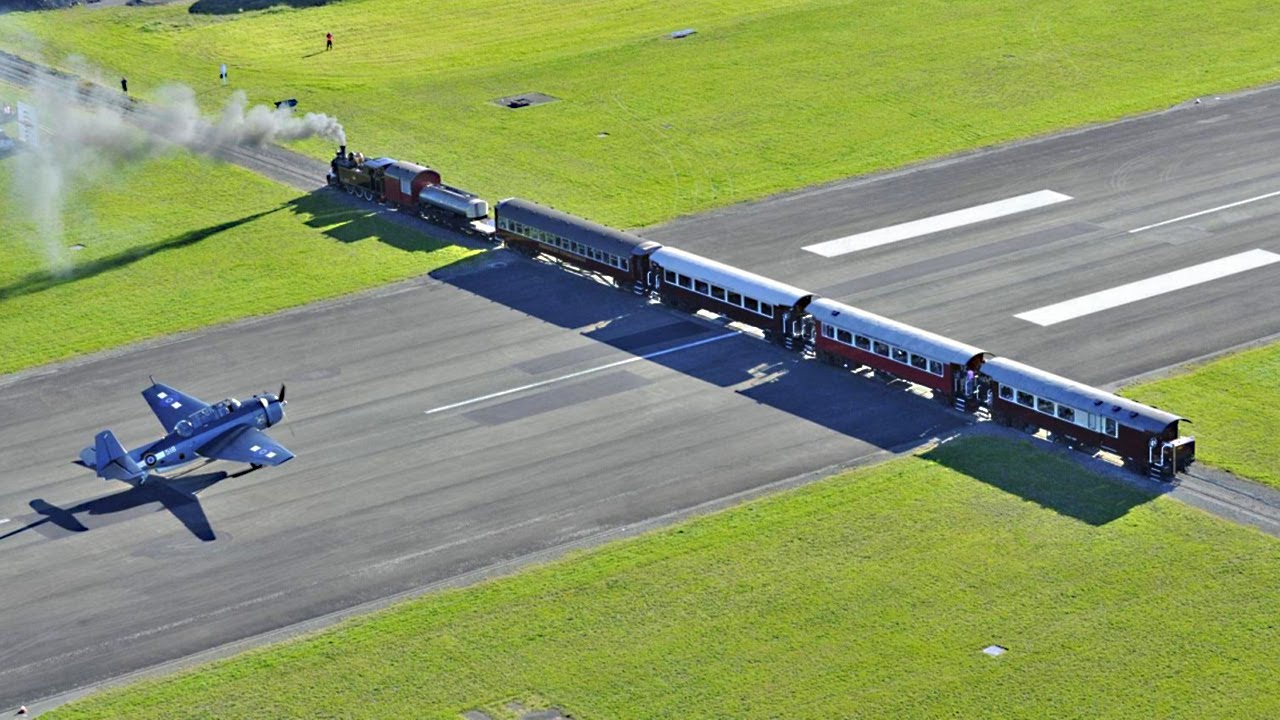 Well, once again we can only applaud the professionalism of the pilots. By the way, Gibraltar Airport is not the only one with such complicated working conditions. In Gisborne in New Zealand the runway is crossed by railway. And on the island of St. Maarten huge ships fly just above the heads of tourists resting quietly on Maho beach.