Asian culture suggests an abundance of temples. As a rule, these temples are shrouded in many myths and legends. One such temple is located in Indonesia, in the southeastern part of the amazing island of Bali, literally one hundred meters from the coast. This is the famous temple of Goa Lavah.

The name in the local vernacular means “Bat Cave”. Save intrigue in this case is almost unreal. Therefore, we say at once – Yes, the temple is located next to a large cave, and yes, in this cave countless hordes of bats. In fact, that is why it is called that. 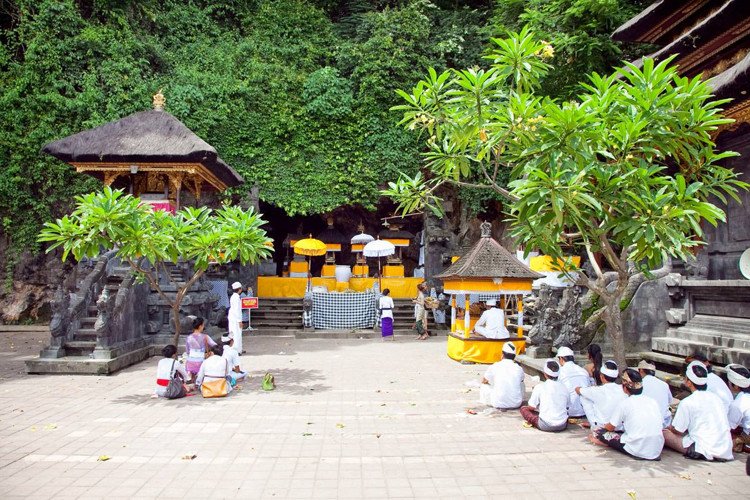 The temple is located 8 kilometers east of Klungkung town and 24 kilometers from the Monkey Forest.

Goa Lavah on a map

The vaults of the cave, located next to the temple Goa Lavah, are hung with bunches of sleeping bats during the day. Their number is endless. No one has counted these nocturnal animals. It is believed that there are tens or even hundreds of thousands of them.

During the day, these harmless “rodents” hover quietly under the vaults of the cave, and at night, in clouds, they fly out to hunt. It is this moment, at sunset, largely attracts tourists here. In Bali, the bat is a sacred animal. 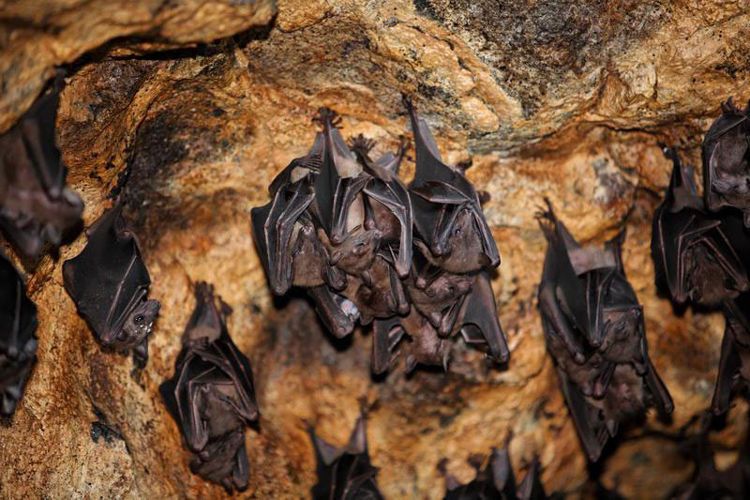 The temple itself was built about 1,000 years ago, in the 11th century, but is still active. The appearance of the temple reflects the traditional architectural style of the island. Some rooms are finished with black stone and decorated with gold.

There are constantly held religious events. In the evening, the monks leave food in front of the cave for the bats. And even the state supports the temple, allocating money for its maintenance. Visiting the temple is available to travelers, if they do not interfere with the ceremonies, and in general behave as expected of respectable tourists. While in the temple, it is allowed to take pictures with a camera or a camera, but only if you do not direct the lens to the praying person’s face and do not try to take selfies with them. 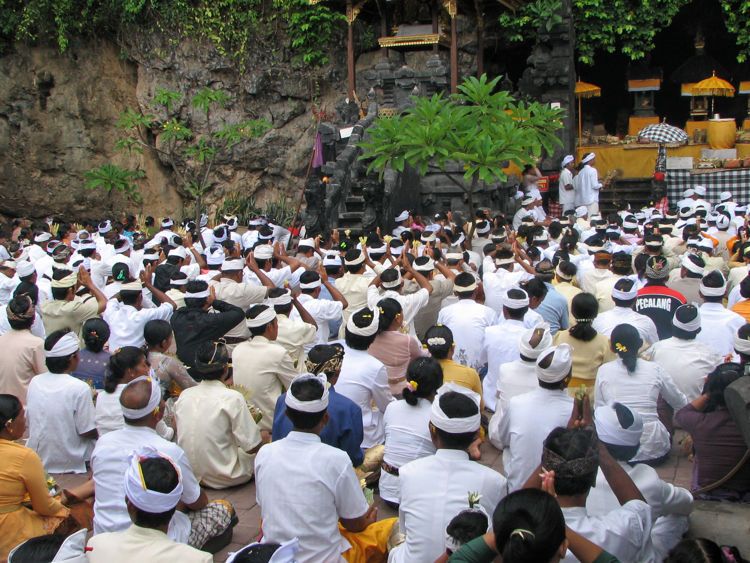 When going to the temple, remember another prerequisite for visiting the temple: the legs (in particular the knees) must be covered with sarong. Remember, it’s a piece of clothing, similar to a pareo? And this rule applies equally to both women and men. You can rent a sarong at the entrance or bring one with you. Experienced people say that this accessory is very useful when traveling in Indonesia in general, and Bali in particular.

Legends of the Goa Laveh Temple

The bat caves have not yet been explored. Rumor has it that they consist of a large number of grottoes and mazes. But no one has been able to confirm this with any certainty. Around the Goa Lavas are legends. Here are some of the most famous of them.

It is believed that the temple protects local residents from evil spirits. There is a fee to enter for tourists and a fee to rent a sarong.

Despite the worship and deification of bats by locals, they are still living creatures. They are characterized by all the attributes of living creatures. Therefore, the smell near the entrance to the caves is quite peculiar. And when you watch as the dusk begins to fly out of the cave, do not be surprised if you suddenly get the products of their life.

The ancient Temple of the Bat in Bali (Pura Goa Lawah) is one of the six main sanctuaries of the island, the walls of which go to an endless stream of pilgrims and tourists. Colorful religious ceremonies are held there almost every day, but it is famous not for that but for its mysterious underground and its inhabitants.

The mysterious temple of Goa Lavah is located on the east coast of Bali on the shore of the Straits of Lombok. Its foundation, like many other Balinese temples, popular memory associates it with the name of a Hindu monk Mpu Kutaran. More than a thousand years ago, he came to the island to spread the new faith among its inhabitants.

The building material for the temple was black basalt, which was mined in abundance in the quarries on the slopes of volcanoes. The decoration is lavishly decorated with gilded elements that create a mystical mood, often including images of bats. The end of the construction of the temple dates back to 1007. In XVI-XVII centuries, it was significantly expanded and acquired a modern look.

In addition to the temple itself, the architectural complex includes several other buildings. In front of the entrance to the cave is an altar to the god of unity Sang Hyang Tunggal. Not far from the main building is also a three-tiered pagoda dedicated to Bhatara Andakasa. Two more small light pavilions are dedicated to Vishnu and Devi Shri. Here one can also bring gifts to Basuka and Segara and make requests for prosperity and well-being. The temple of Goa Lavah is dedicated to Dewa Laut, the god of the center of the sea, which is revered in Indonesia, and also symbolizes the head of the great serpent Basuka, so there are many images of these on its grounds.

The Prekempa Gunung Agung chronicles a time when the human world was in terrible danger. To save the world, Shiva sent three of the most powerful gods, Brahma, Vishnu and Ishwar, to help the people. According to this legend, Vishnu created the island of Bali. He turned into the great serpent Basuki and with his fiery breath made the waters of the ocean part, and the body of the serpent petrified and became an island with a mountain peak.

The underground labyrinth and its inhabitants

The famous bat cave is located behind the temple in the depths of the hill. Thousands of bats live under its vaults all the time. There are so many of them that the walls and vaults of the cave seem to be alive. Care must be taken not to frighten the animals. The entire atmosphere of the cave is saturated with a mixture of incense and excrement. The air is heavy also because of the high humidity, so there are very few people who want to stay inside for long.

It is better to observe the behavior of animals outside the cave. Every day the altars at the entrance are filled with the offerings of believers. Bats eat these fruits with pleasure, not being afraid of video cameras of visitors to the temple.

An interesting spectacle awaits the tourists at sunset when the bats go hunting. At first, individual animals leave the vaults of the cave, and then a huge flock rushes out, covering half the sky for a while. A good photo of this experience goes straight into your Bali travel illustrations.

Legend of the Cave

According to legend these little animals guard the peace of an ancient dragon, still living in the mysterious depths of the cave. At the beginning of the 20th century it was even allegedly seen by two Dutch soldiers who dared to go inside. Frightened by the sight of the monster, they opened fire and narrowly escaped. Punishment for the sacrilege did come upon them. The first night the tent where they slept disappeared in a blaze of strange fire.

The true extent of the cave is not known. It is finally closed to visitors after the mysterious disappearance of two Dutch scientists who received permission to explore it. Local residents are convinced that the tunnels connect Goa Lavach with the temple in Besakih, the distance between them on the map of the island is 25 km. In confirmation of their words, they tell the story of one of the Raja Mengvi who went underground from the temple to the temple.

Near the temple there is an extensive parking lot, which always has enough free space for a car. The cost of a tour of the site is $3. It also includes the rental of a sash and sarong. At the gate to the complex tourists are waiting for children, in abundance offering souvenirs “as a gift”, but it is better not to take them rashly, because when you go out for them anyway will have to pay the parents of the children.