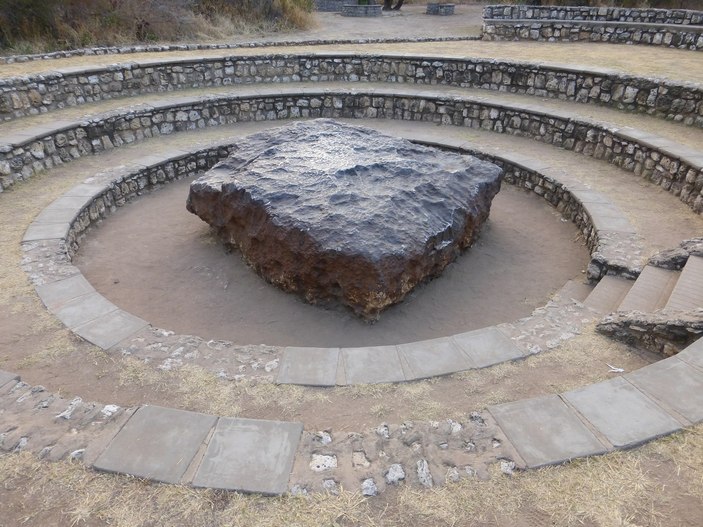 In front of you is one of Namibia’s most unusual sights – the Goba meteorite. It is the largest meteorite in the world: a rectangular block measuring 2.9 × 2.9 × 0.7 m weighs about 60 tons.

In fact, no one has ever weighed this boulder, but according to chemical analyses it is known that the meteorite consists mainly of iron (82.34%), nickel (16.44%) and cobalt (0.78%). This allowed its mass to be calculated as early as 1921, shortly after its discovery. According to the meteorite classification, Goba belongs to Class IVB iron meteorites (ataxites, see Ataxite), which are characterized by high nickel content and the absence of widmanstetten figures (see Meteorite Lattice Day Picture). At the time of its discovery, it was surrounded by a layer of “iron shale” – iron oxides and hydroxides formed by the destruction of the meteorite, which were later removed during excavation. If we take this material into account, it turns out that Goba weighed even more at the time of its fall – about 88 tons. 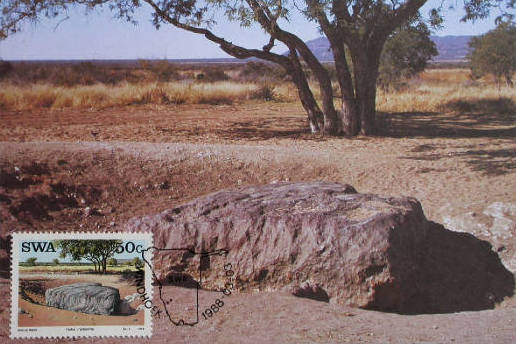 Postcard and postage stamp of Namibia with an image of the Goba meteorite. Image from marmet-meteorites.com

A curious feature of Goba is the absence of any crater. Computer modeling of its impact shows that Goba likely “landed” at a slight angle (about 5°) and left a crater 20 meters in diameter and 5 meters deep, which later disappeared due to erosion. Based on analyses of the rocks beneath the meteorite, scientists have determined that the fall occurred 80,000 years ago.

Goba was discovered in 1920 by Jacobus Hermanus Brits, who lived on Goba West Farm. According to his story (recorded in 1954), he went hunting in the winter and sat down to rest on a strange rock that was different in color from the surrounding limestone. Scratching it with his knife, Brits noted a strange metallic feature that the blade left behind. He later returned to the stone and used a chisel to chip off the fragment, which he sent to the South West Africa Company for examination, where geologists determined it to be meteoritic material. At the same time, the first chemical analyses were carried out, which showed the presence of 81.29% iron and 17.49% nickel. At that time, the meteorite had not yet been excavated, as in the main photo, and it was assumed that it went several meters deep, so its mass was originally estimated at 87 tons. 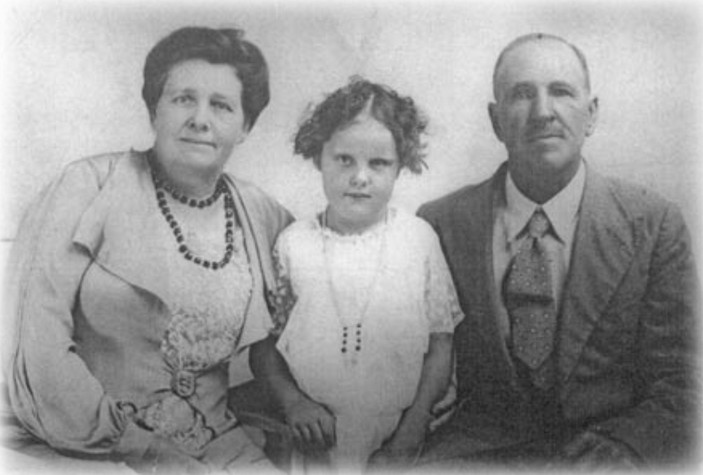 In 1921, Michael Hansen, the immediate owner of the Goba West farm, sent a letter to the “director of the museum in Pretoria” (Transvaal Museum):

” I have discovered on my farm a large Meteorite, 39 inches thick, the surface of which is a regular rectangle of three by three yards. It lies horizontally on the ground, and I have dug a trench around it to determine the thickness.

I would be very grateful if you could let me know – if you are interested in similar meteorites, it is composed of metal, approximately 80% iron and 20% nickel.

Could you let me know what size meteorites are usually found in Africa and if this find is worth anything.

If you are not interested in it, I would be grateful for any contacts of European or American organizations that are interested in Meteorites.

The Transvaal Museum forwarded the letter to the South African Geological Survey, whose director, Dr. A. W. Rogers, replied as follows

” Your letter to the Director of the Transvaal Museum dated September 17 has been forwarded to me.

The largest meteorite fragment found in Africa to this day weighs about 2000 pounds [here we are talking about meteorite Kouga Mountains weighing 1173 kg], but the total weight of fragments of the Gibeon meteorite is 15 tons. The weight of the fragment found on your farm must be more than 45 tons.

The value of such meteorites can not be accurately determined. Some of these meteorites (for example, consisting of stone, not metal) are worth quite a lot, but such samples are very rare and break down in the ground faster than iron-nickel meteorites. The price of a meteorite is determined by the amount that museums are willing to pay and, among other things, by the ability to transport it. Meteorites are not sheep or cows, and I can’t name a fixed price.

I hope that a representative of the Ore Department can visit your farm and inspect the meteorite.”

Despite the restraint of this response, Rogers was very enthusiastic about the find, and we know from several of his subsequent letters to colleagues that his plans were to transport the meteorite from Namibia (then Southwest Africa) to South Africa in whole or even in parts, despite the questionable legality of the operation. But the lack of efficient methods of transporting such a heavy object over the African roadless terrain prevented their implementation.

By the end of 1921, it was not very clear who owned the meteorite – the local authorities or the farmer – and what to do with it next. Moreover, almost no one knew of its existence outside of South Africa. 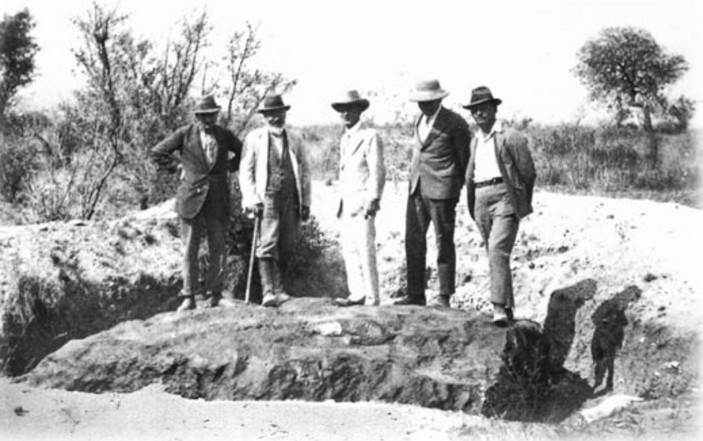 Participants of the International Geological Congress at the Goba meteorite, 1929. The photo shows a trench dug for sizing. Photo from article by P. E. Spargo, 2008. The History of the Hoba Meteorite. Part II: The News Spreads.

But in 1923, with the publication of official information about Hoba in the Catalog of Meteorites, things began to change. It gained notoriety in professional circles, and in 1929 it was already being visited by members of the International Geological Congress, and news of the discovery of “the world’s largest meteorite” was making its way to American newspapers. 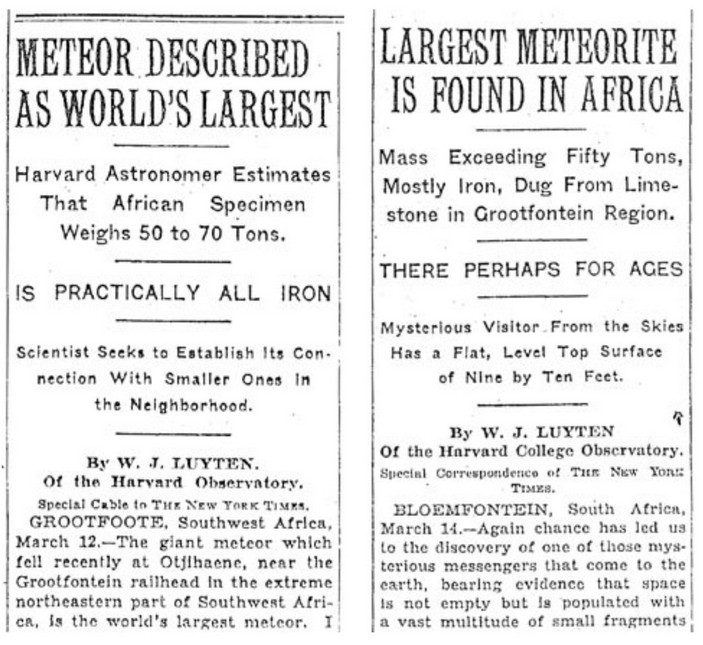 As Hoba grew in popularity and became a local landmark, acts of vandalism became more frequent, as a result of which it lost some of its substance. Unfortunately, it is impossible to count all the fragments in private and public collections, but according to existing estimates the 18 known fragments weigh almost 25 kg.

Fragments of the Goba meteorite. On the left is a polished fragment weighing 54.9 grams from a private collection. Photo from marmet-meteorites.com. On the right – the fragment, selected by the curator of the mineralogical collection of the British Museum of Natural History L. Spencer in 1929 during a tour of the International Geological Congress. Image from marmet-meteorites.com

To stop the destruction of Goba, in 1955 the government gave it the status of a national monument, but it had no effect. In 1987, the area around the meteorite took on a modern appearance: the Namibian company Rössing Uranium Limited (see Rössing uranium mine) landscaped the area by building a tourist center, a fence and steps to the meteorite. After that the vandalism stopped and the tourist flow increased.

This incredible find was made in 1920 by Jacob Brits, a farmer on his farm in Namibia. While plowing the ground, he came across something large lying in the ground. At first he thought it was a stone. After digging around, Brits realized it wasn’t a rock at all. He scratched it with his knife and saw that it was shiny. The farmer reported his find to the local authorities. Specialists arrived and determined that it was a meteorite.

The first photo with the found meteorite. Photo source: https://likeni.info/meteorit-goba/

The size of the meteorite found is 2.7 × 2.7 × 0.9 meters, and the weight at the time of detection was about 66 tons. By its composition, Goba belongs to the iron meteorites and is the largest piece of naturally occurring iron. Since its discovery and to this day, the meteorite has remained in its place. Now it is a popular tourist spot. Tourists who have been there try to “nibble” a piece of deep space, which lies on the earth for about 80 thousand years. That’s why scientists say the current weight has been reduced to 60 tons.

READ
Avenue of Baobabs - giant poles by the road. Madagascar

Well, a meteorite. Well, it’s big. What’s the big deal, you might ask. The fact that it can not just fly in and gently collapse on the ground without forming a decent crater. With its size, the diameter of the crater, according to rough estimates, should be about 20 meters and about 5 meters deep. Except there’s no crater. At all.

Scientists put forward different versions. There is an assumption that in 80,000 years the water-air erosion has simply leveled the crater and thus the crater has disappeared. I want to say, are you guys all right with logic? The pit disappeared and the meteorite was on the surface? Rather, erosion would have contributed to the crater crumbling over time, and the meteorite would have remained five meters deep underground. And here it is literally on the surface.

You can clearly see the scale of the alien from space next to the man. Photo source: https://my-facts.ru/kosmos/samye-krupnye-meteority-kogda-libo-upavshie-na-zemlyu

According to another version, the meteorite entered the Earth’s atmosphere at a very small angle, about 5 degrees, and reduced its speed to literally zero, and then just crashed to the ground, like an apple off a branch. But it doesn’t happen that way either. The speed at which the meteorites enter is fantastic. It is about 40 km / sec, and the surface of the planet is reduced to 12 km / sec. If you translate into the usual km / h, it turns out 43000 km / h! Imagine a giant weighing 80 tons (which was the original weight), which crashes into the ground at 43000 km/h. Is this called crashing? Or did it fly over the surface for another 24 hours and reduce its speed to zero? Well, that’s crazy! Then how do you explain the fact that it was found on the surface?

Moreover, there are examples of how huge meteorites after collision with the earth literally evaporated from the explosion. This happened, for example, with the famous Arizona meteorite, which, according to scientists, weighed about 300 thousand tons! He left behind a crater with a diameter of 1200 meters and a depth of 229 meters. And in the case of the Goba meteorite and he himself is whole and there is no crater. How so?

To understand this, we need to go back in time and look at the place where the meteorite fell. Now Namibia, is a state in southwest Africa. It is a hot desert area. But at that time, these lands were bounded by a thick ice shell and it was this that took the brunt of the meteorite impact. There was a crater, there was a powerful shock wave, but it all happened in the glacier. And then later, when the ice began to melt, Goba slowly sank to the ground.

Friends, write your versions of what happened in the comments. It will be interesting to read!