Goblin Valley is a state park in Utah known for its unique rock formations. They are commonly referred to as “goblins.”

The park is a vast area with a wide variety of geological formations. Scientifically, they are called hoodoos. Hudu consist of mushroom-shaped elements that give the area an unearthly appearance. These formations are so bizarre that the name “goblins” stuck to them. Yes, and the name “valley of goblins”, in our humble opinion, perfectly suits this place. 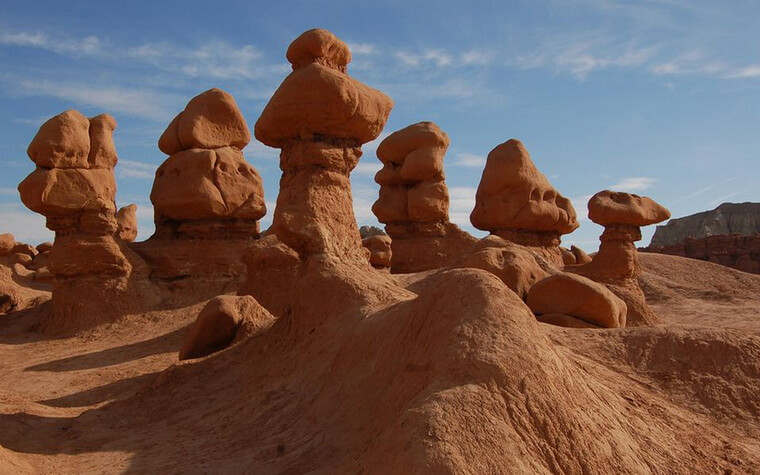 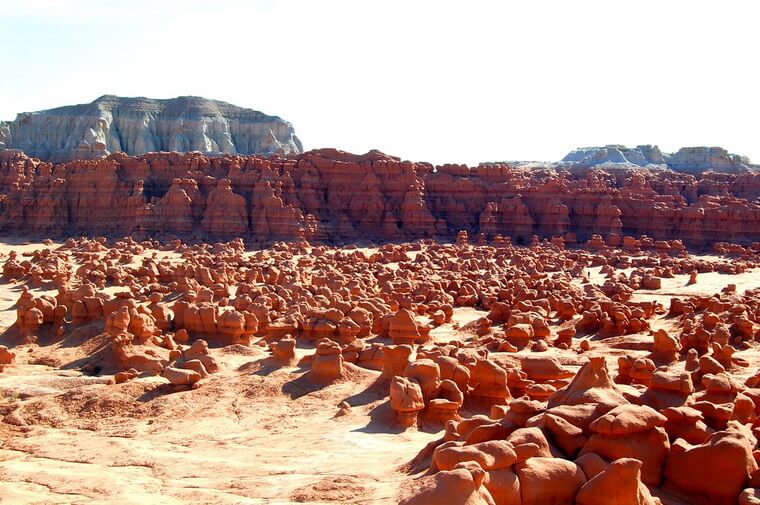 Where the goblins came from.

The unusual stone forms in the valley are the result of weathering of the Entrada Sandstone. It, in turn, was formed as far back as 170 million years ago.

The local rocks consist of debris from the former highlands and are alternated by layers of sandstone, siltstone and shale. The rocks indicate that they are on the edge of an ancient sea. This is evidenced by the characteristic tidal channels.

The sea receded and erosion began to actively attack the valley. As a result, the soft rocks weathered and the hard ones took those very fantastic shapes. 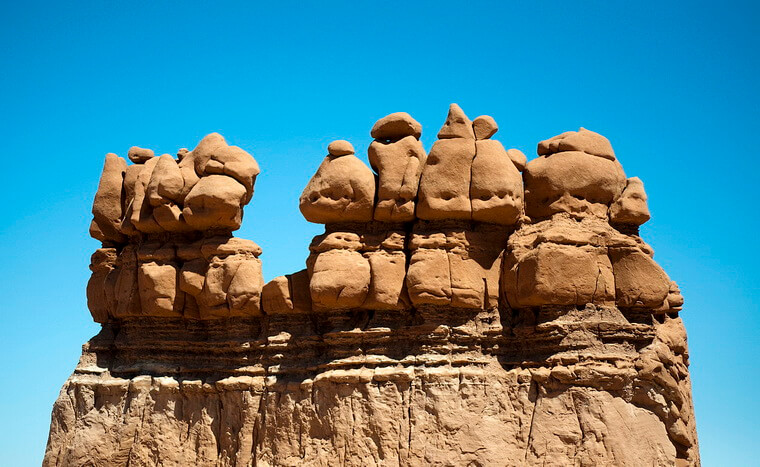 What was the name of the Valley of the Goblins local Indians is unknown. The place was first mentioned in 1949 as Mushroom Valley, because the first formations found are very similar to stone mushrooms. Later, however, many different formations were discovered, and gradually these places became known as Goblin Valley. 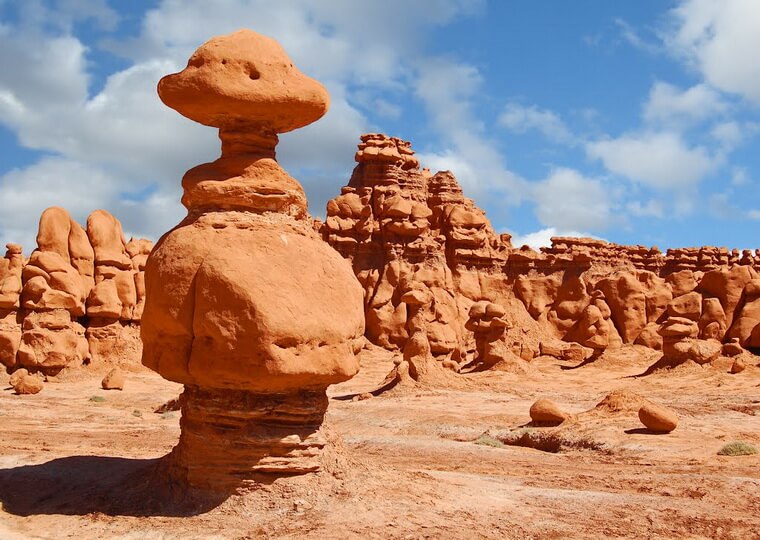 An interesting fact – because of the fantastic scenery, the Goblin Valley landscapes are often used in the cinema. As a rule, as a scenery of fantasy films.

One of Goblin Valley’s impressive exhibits is an interesting formation called the Three Sisters. 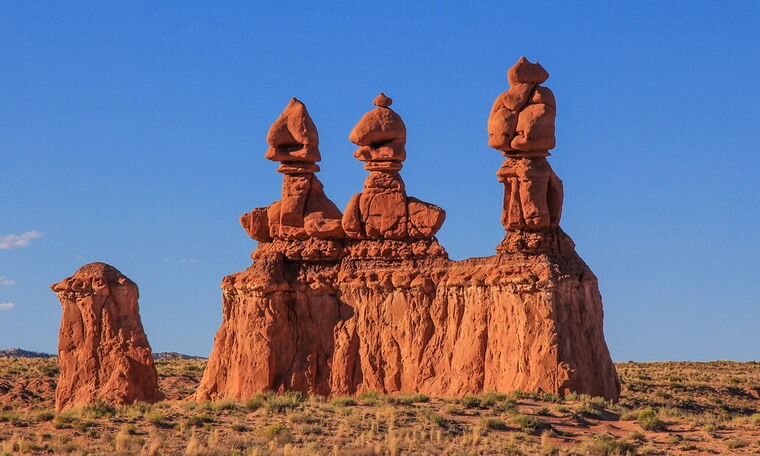 The Three Sisters in Goblin Valley

Goblin Valley lies at an altitude of about 1,500 meters. Temperatures in the region are quite high in the summer, averaging 32 to 41 o C. However, due to the sparse vegetation and high altitude, the temperature often drops to almost 10 o C. In winter, the temperature is only 2-5 o C and at night it drops below zero. The average rainfall is less than 20 cm per year.

READ
Jacob's Well is a deep hole in a shallow creek. Texas. USA

Of plants, you can find ephedra (Mormon tea), Russian thistle, juniper, rice grass, and some cactus species. Animal life includes hares, scorpions, foxes, snakes, and coyotes. Many of the animals that live here are nocturnal and appear only at night.

The valley’s unreal alien scenery attracts tens of thousands of tourists each year. Hiking and camping are very popular in Goblin Valley.

Although all of the valley’s exhibits are stone figures, they are protected. Damaging them is punishable by law. And that’s not just words.

In October 2013, a Boy Scout leader intentionally destroyed one of the Goblins. Typically, such inadequate actions are captured on video. And so it was this time – one was destroying, the other was filming. The video appeared on the Internet and attracted the attention of the police.

At the trial, the “winners” of the goblin stated that the hoodoo was ready to fall. And they destroyed it on purpose to prevent possible injury to tourists. However, according to the court decision, the men were fired from their jobs and sentenced to 1 year probation with a mandatory payment of a large fine.

For more information on visiting Goblin Valley, camping costs, park hours and how to get there, check out the official website for this attraction. Goblin Valley State Park is an amazing world of rocks. Thousands of rocks and cliffs of the most bizarre shapes, reaching several meters in height, are concentrated here. These fantastic and unique natural sculptures, which resemble fairy goblins, were formed by the work of wind, sun and water, and strike the imagination of anyone who comes here. This park is a photographer’s paradise.

Goblin Valley was first discovered by cowboys who went in search of strays from the herd of cows. Then, in the early twentieth century, a businessman named Arthur Chaffin and his business partners went in search of interesting new trails.

During this expedition, they came to a place that was located about a mile away from the Goblin Valley, and found here five huge stone “bottles” and many very strange shaped rocks. Chaffin called the site “Goblin Gorge” and returned here in 1949 to study the mysterious valley and film it.

After the photos were published, a major publicity campaign began, and gradually many tourists streamed into the valley. To protect Goblin Valley from vandalism, in 1954 Utah authorities gave it the official status of a national reserve. Several trails were laid out, and tours are still offered. Monument Valley, one of the national symbols of the United States, is a unique geological formation that deserves to be listed as one of the wonders of the world. It’s a stretch of the border between Utah and Arizona, and the national park area is part of the Navajo Indian Tribe’s reservation. The valley’s breathtakingly beautiful scenery has inspired many filmmakers many times, and is familiar to everyone from famous movie footage.

Millions of years ago, the Mesozoic Sea splashed where the desert now stands. The sea gradually receded due to the uplift of the Earth’s crust, and a vast plateau formed in its place. Over the millennia, rain, wind and frost worked the rocks and the result was the majestic yet bizarre towers and columns.

Almost until the end of the XIX century this amazing corner of nature was available only to the gaze of the militant Navajo tribe, but after the end of the wars with the Indians, began a fairly active visit to this wonderful corner of the Earth. These days, you can explore the beauty of Monument Valley from your car window.

But still, for a truly powerful experience, it is worth climbing one of the rocky outcroppings. The scenery, which opens to the traveler, will shock you to the core with its unearthly beauty.

Valleys of the World