The waterfall of Gocta (in the original Spanish Catarata del Gocta) is one of the twenty highest waterfalls in the world and occupies an honorable 16th place. The total height of the waterfall is 771 meters.

Gocta is a two-level waterfall. It is located in the tropical jungle of the Amazon, on the territory of Peru in the province of Bongara. It is about 700 kilometers northeast of Lima. The waterfall flows into the Cocahuayco River. The top point of the Gocta Falls lies about 2,500 meters above sea level.

The power of the stream largely depends on the season. Thus, during the dry season, the waterfall is not as impressive as during the wet season, when the volume of water increases significantly. 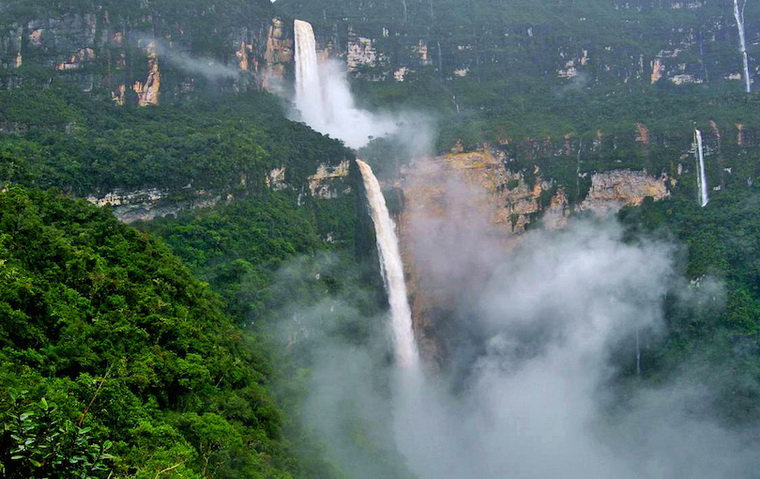 It would seem that such a majestic waterfall should have been known to the world since ancient times. But no, for a long time only the local Indians knew about it. The rest of the world learned about it only in 2005 after the expedition of the German scientist Stefan Siemendorf with a group of Peruvian colleagues. Stephan even had to persuade the government of the country to put the Gocta Falls on the map, indicating the exact location and height.

On March 11, 2006, after the third expedition to the falls, Siemendorff held a press conference which resulted in interest from the scientific community. The Peruvian authorities agreed to publicize information about the waterfall and promised to create a tourist infrastructure in the vicinity. 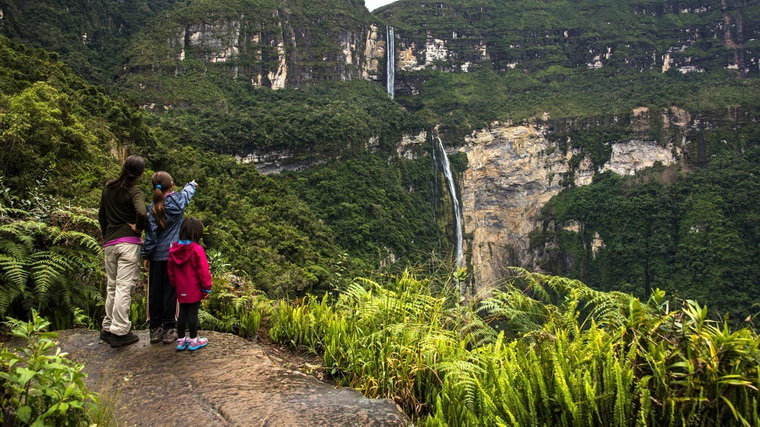 Gocta Falls in the Dry Season

Why has such a grand and stunning waterfall, visible for several kilometers, remained in the shadows for so long? There is a mystical reason for that.

The Legend of Gokta Falls

This powerful and rather high waterfall was hidden from the eyes of the world until the beginning of the third millennium. This is all thanks to the locals who have been telling an old legend by word of mouth since ancient times. It tells of a waterfall under the protection of a blond mermaid. She was thought to be the spirit of water and the cascades of the waterfall are her hair. An ancient myth says that the mermaid holds a golden bowl, which, in turn, is guarded by a giant serpent. This is why locals have stayed away from the waterfall since time immemorial.

The natives are afraid of its curse, but revered and carefully guarded information about the location of the waterfall. It was believed that misfortune would follow whoever told strangers about the place. 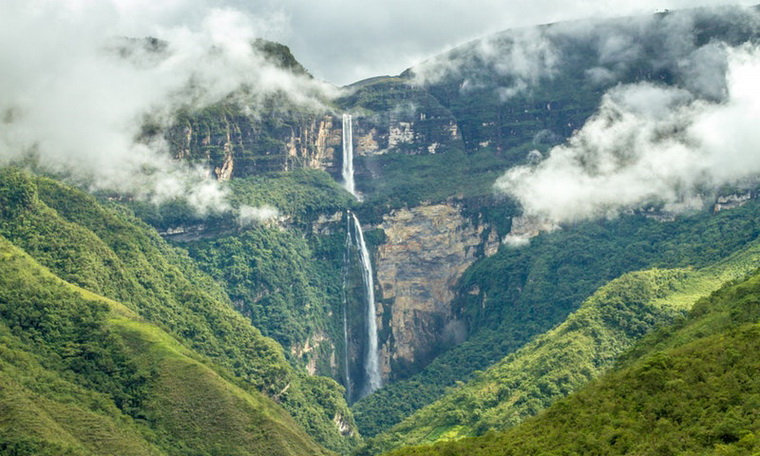 Gokta Falls: A Place in the World Waterfall Rankings

As soon as the existence of this remarkable waterfall became known, it was immediately ranked as the third highest (Angel and Tugela are first and second respectively). A little later it turned out that two waterfalls were found in Norway, which were higher than Gokta and pushed it to the fifth place. Later, after collecting data on other waterfalls, the scientists gave Gokta Falls the 14th place. Currently, it is the 16th highest waterfall in the world.

Now the data about the Gocta Falls are known. It rightfully takes its rightful place in the list of attractions of the world. The first small hotel was built 10 kilometers from the waterfall, where the windows of all the rooms overlooked the waterfall. A little later, tourist activity began to develop, and the hotels were a little more. The closest ones are located in the village of Kokachimba, 4 kilometers in a straight line from the waterfall. 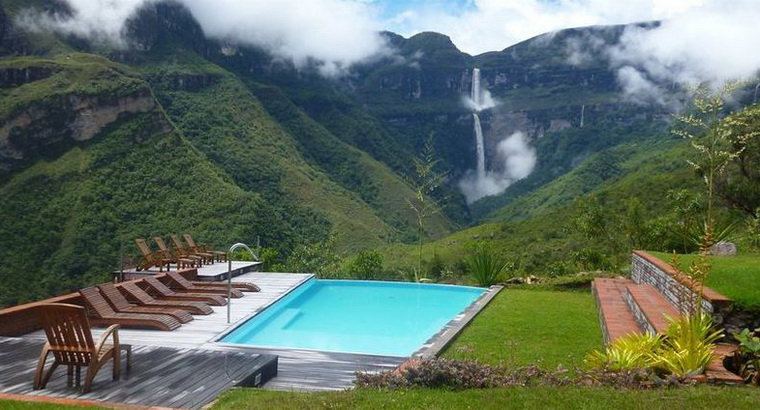 Hotel with a view of the Gocta Falls 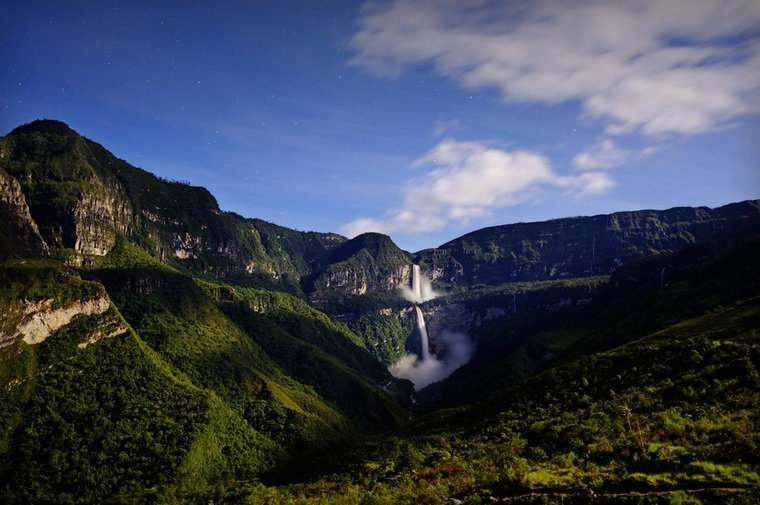 Gokta Falls from a distance

This attraction is hard to reach. But if you manage to visit this part of the country, you know that 12 kilometers to the north there is another attraction. This is a multi-level waterfall Jumbilla with a total height of 896 meters. It also gains its full force during the rainy season.

Gocta Falls in Peru – an unknown wonder of the world 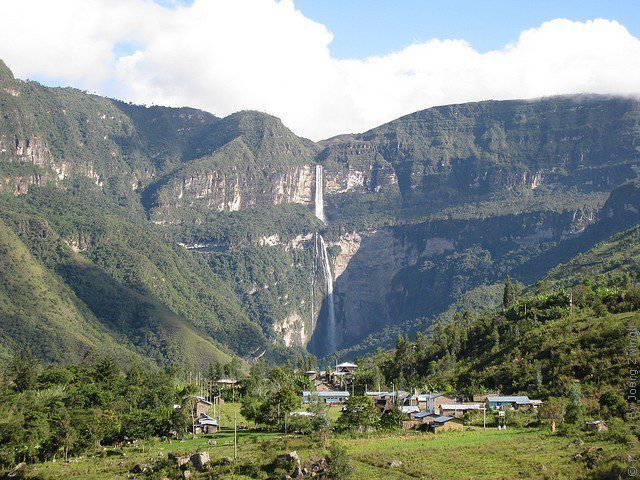 The Gocta Falls are one of the highest waterfalls in the world with two cascades of falling water. For centuries it has been known to the natives of Chachapoyas, one of the seven provinces that make up the Amazonas region of northeastern Peru. Gocta Falls is one of the most fascinating finds for waterfall lovers. It debunks our claim that the world is already thoroughly explored. In fact, there are still little-known, or even altogether undiscovered, areas that harbor such beautiful natural attractions. 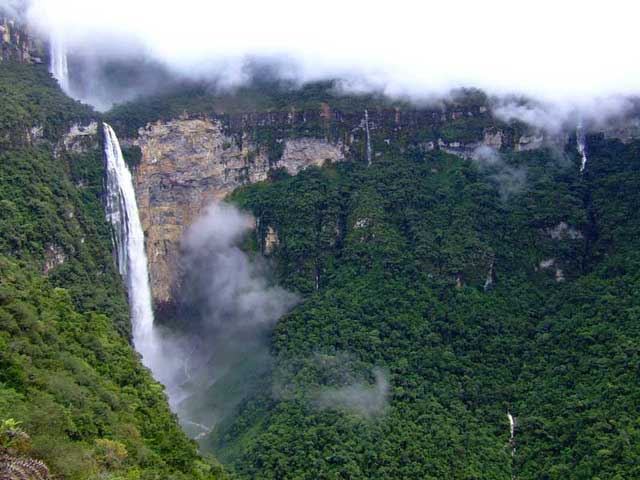 Located some 700 km northeast of the capital Lima, the Gokta Falls were discovered by a 2005 expedition led by German explorer Stefan Siemendorff. He participated in a project on the use of natural resources in Peru and was the first to inform the government of the discovery, lay out a route to the waterfall and take measurements of its height. The volume of water is relatively small, but during the rainy season the waterfall turns into a strong stream. In March 2006, a camera crew arrived in the region and videotaped the falls for the first time. 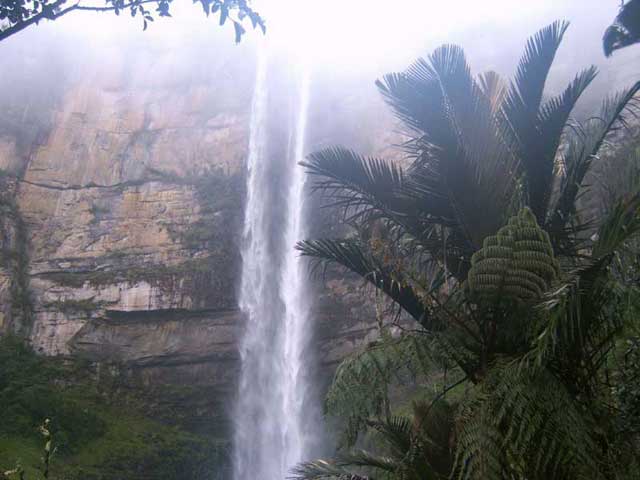 Visible from many kilometers away, the waterfall was named Gokta, after the nearby village. According to Stefano Siemendorff’s measurements, the total height of the waterfall is 771 meters. Based on data from the National Geographic Society, Gocta Falls has been declared the third highest waterfall in the world after Angel Falls in Venezuela and Tugela Falls in South Africa. But other sources put it in fifth or even fourteenth place. 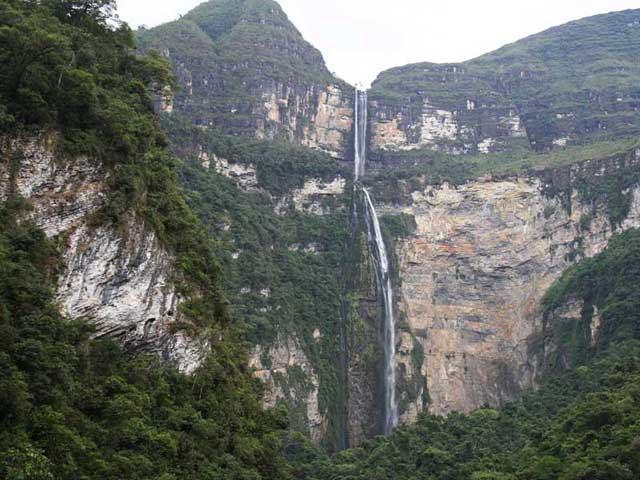 The Gocta Falls are steeped in legend. For example, the Peruvian newspaper El Comercio published information that the delightful waterfall has remained unknown to the public for so long because the locals were afraid to make its location public because of the threat of being cursed by the beautiful blond siren who lives in its waters. Legend has it that the siren holds a bowl of gold here, which she is helped guard by a huge snake. Despite the threat, on March 13, 2006, the Peruvian government announced in the media the impending creation of a tourist infrastructure around it. Most likely, tourists will have to overcome their fear of the curse of the mysterious siren in order to see the waterfall. 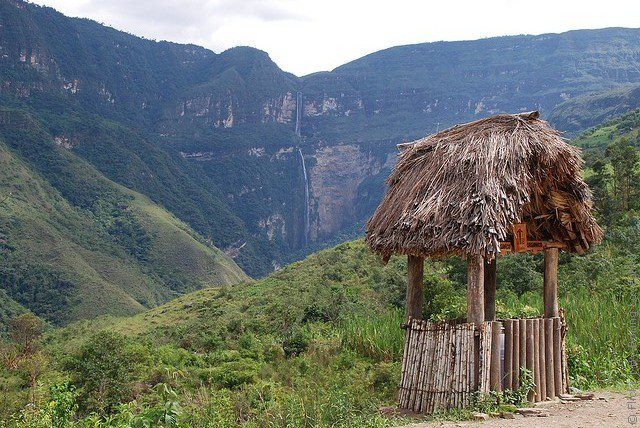 Gocta Falls: How to Get There

If you want to visit Gocta Falls you must fly to Chiclayo and from there take a car or bus to the small village of Cocachimba. The town of Chachapoya is a two-hour drive from Cocachimba. Cocachimba serves as the starting point for the hike through the tropical jungle to the waterfall, which takes about 5 hours there and back. The dry season lasts from May to September. During this period, the trip to the falls is easier, but then it looks less impressive. 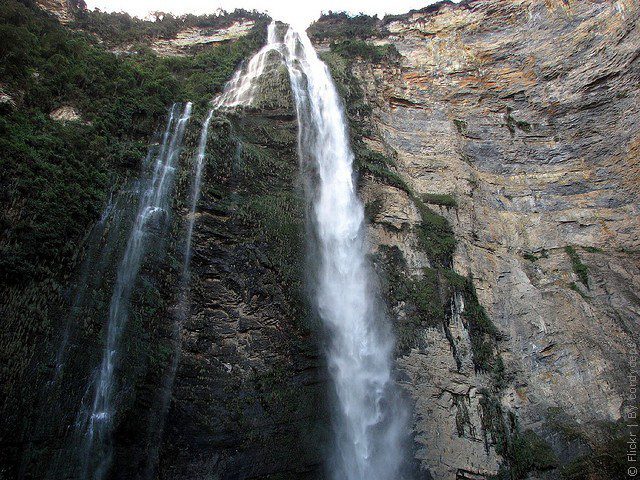 During the rainy season, Gocta appears in all its glory. During the hike there is the opportunity to see other waterfalls, toucan birds, hummingbirds, monkeys and more. Although some explorers come here, Gokta has not yet become a popular tourist attraction. But it’s only a matter of time. Over the past few years, the tourist infrastructure has developed here, several restaurants have opened (one of them along the paved trail to the waterfall), a hotel is under construction, when completed, it will probably be able to accommodate the entire population of tiny Cocachimbo. 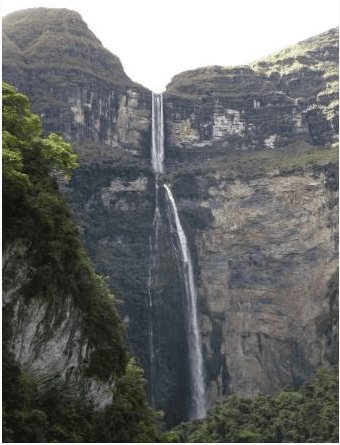 Gocta: What else to see nearby

In addition to the Gocta Falls, the attention of many tourists in the region is attracted by Cualep, a fortress of the Chachapoya civilization, conquered by the Incas. The fortress was built in the X century and existed until about the XVI century. It is located at an altitude of 3,000 meters above sea level and was rediscovered by explorers in 1843. Each year, more than 10,000 tourists visit the fortress. Kualep Fortress can be reached from the small town of Chachapoya (Chachapoya). The town of Chachapoya was founded in 1538 and served as one of the starting points of many expeditions in search of Eldorado, the mythical land of gold and precious stones. The legend of Eldorado sparked such imagination and greed among adventurers in America that since 1535, attempts to find this mythical land have continued unabated for nearly 250 years. Or you can go to see the city of Machu Picchu or the Nazca Plateau with its famous geoglyphs, also located in Peru.