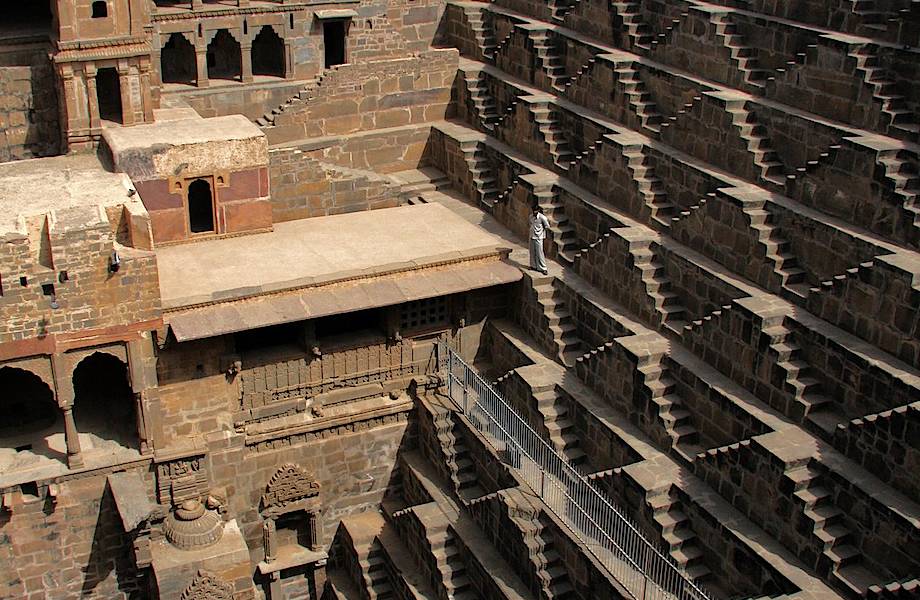 The ancient structure of Chand Baori was erected between the 9th and 11th centuries in the city of Abaneri in India. The structure is a huge stepped well that impresses with its amazing architecture. The depth of this masterpiece is so great that it can be compared to the height of a 13-story building. Chand Baori is considered the deepest and most beautiful stepped well that exists in India.

Today, many pilgrims come here to wash their hands and feet in the water of this sacred place. It is strictly forbidden to swim here. According to bacteriologists, the local water can “kill a person in 2-3 days”. Safety precautions are monitored by caretakers, and to be completely sure that nothing happens, the reservoir is fenced off with railings.

Chand Baori consists of 3,500 steps and various niches with sculptures of Indian deities. 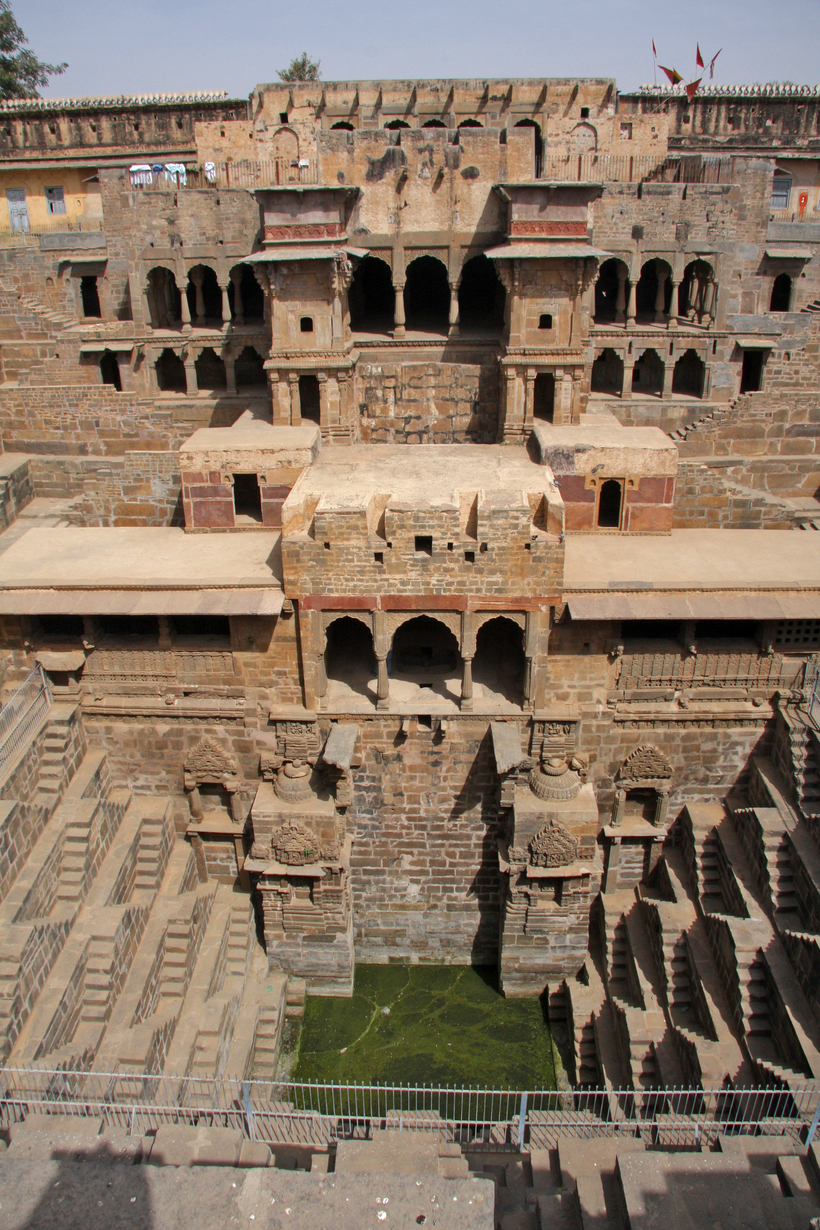 Such great depth was necessary to reach the groundwater. 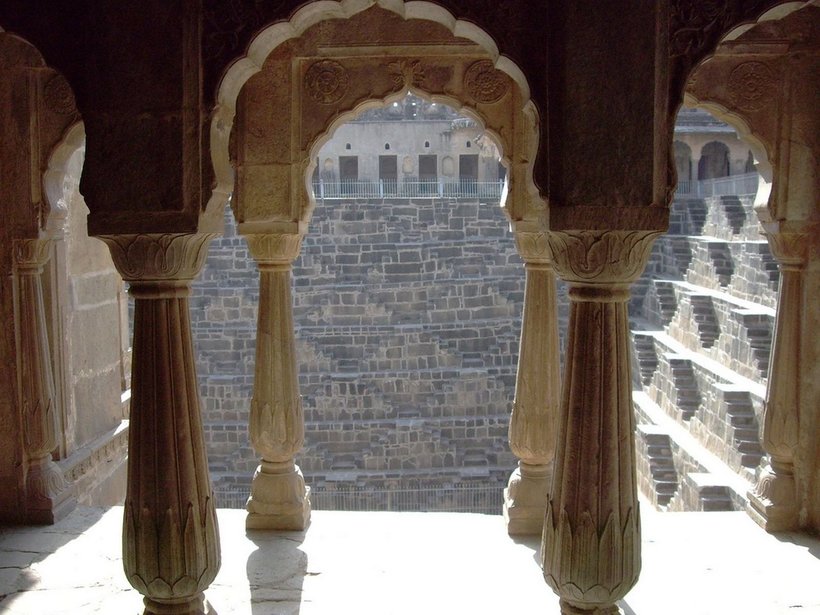 Rainwater also accumulated in the well. 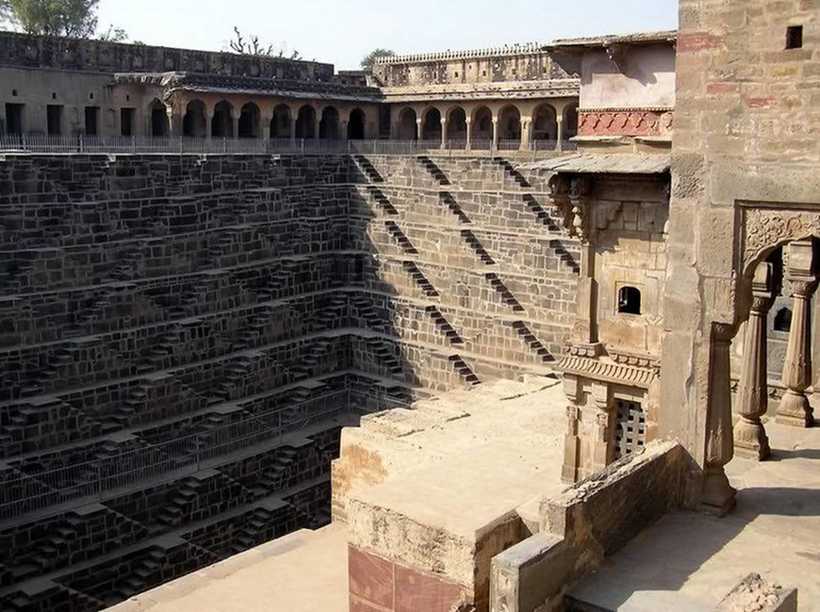 Wells in ancient times were the main sources of water and had special significance for people. That is why going down to the water was a whole ritual. 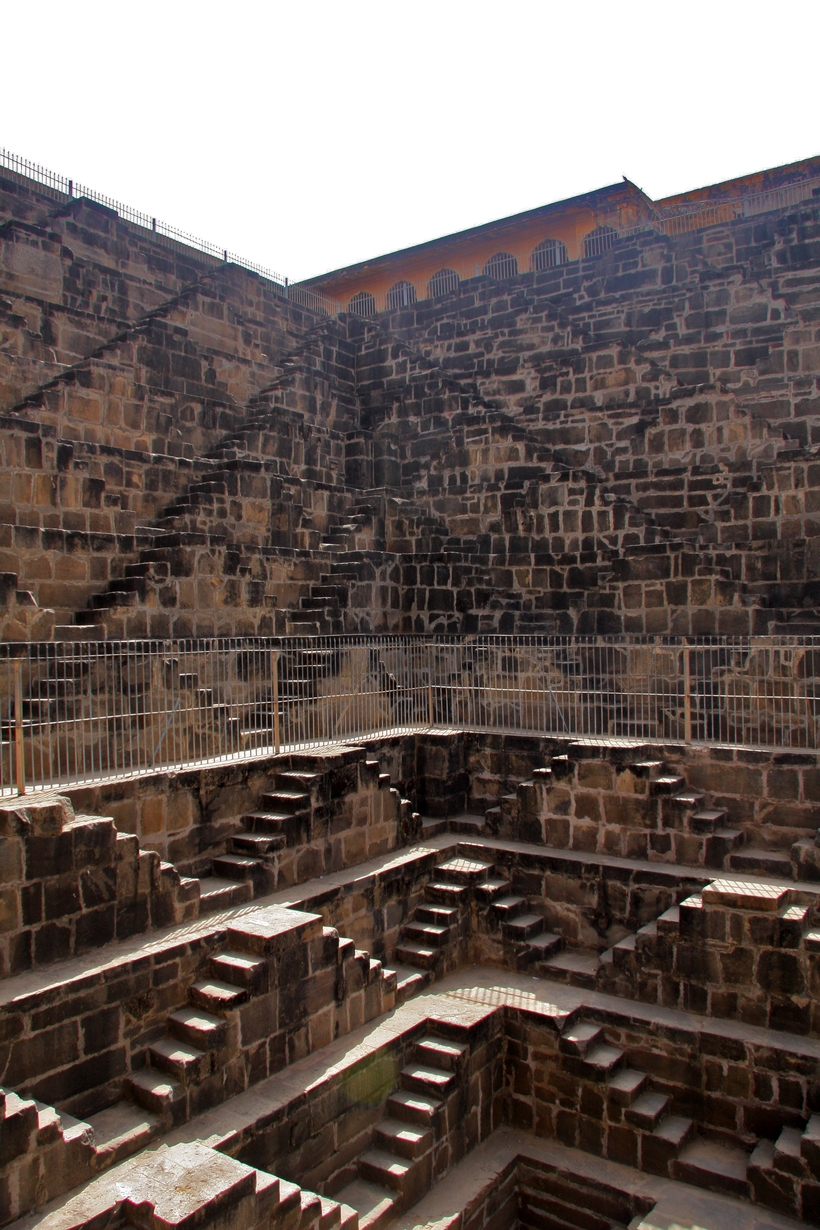 The descents to the water inside the well were designed and built like great works of architecture. Chand Baori with its incredible depth is a testimony to the greatness of the Indian people. 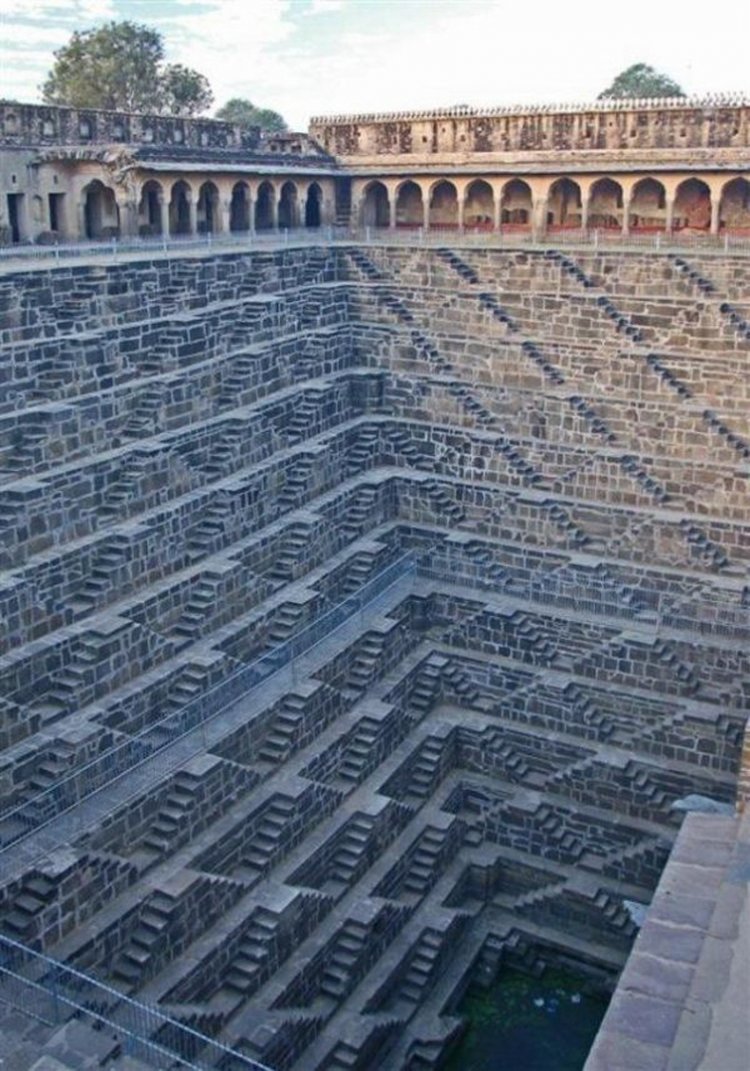 There is always water in this ancient well, and it is impossible to tell the level of its fluctuation from the walls. 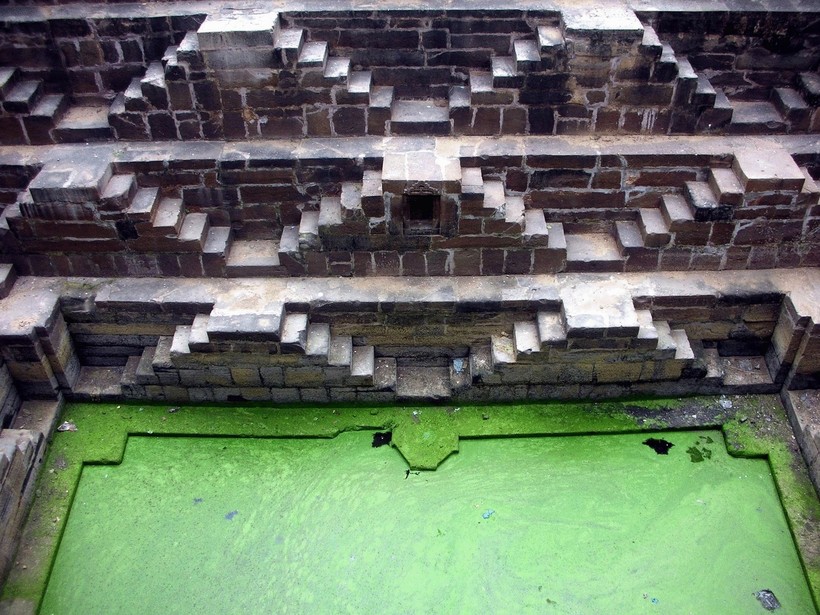 The water in the well is always cool, which is incredibly valuable in a hot climate. 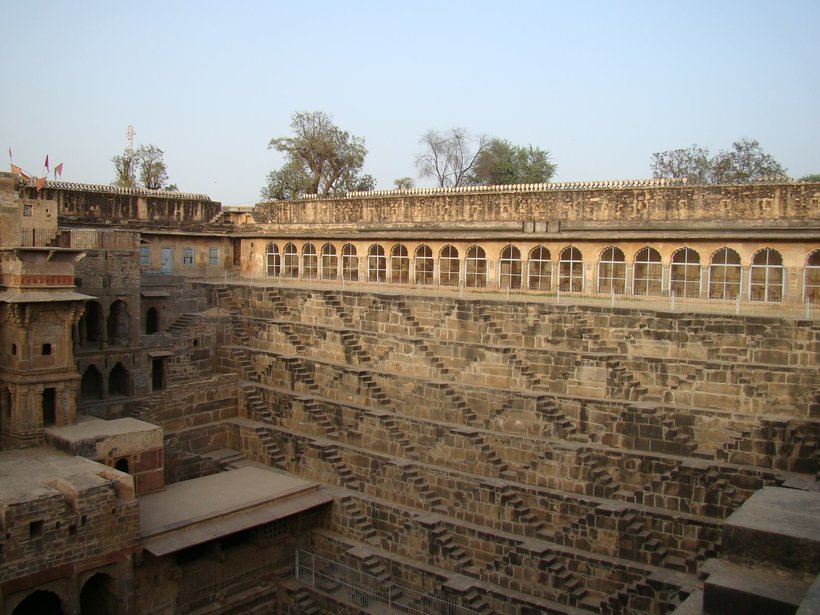 At the bottom the walls of the well noticeably narrower. 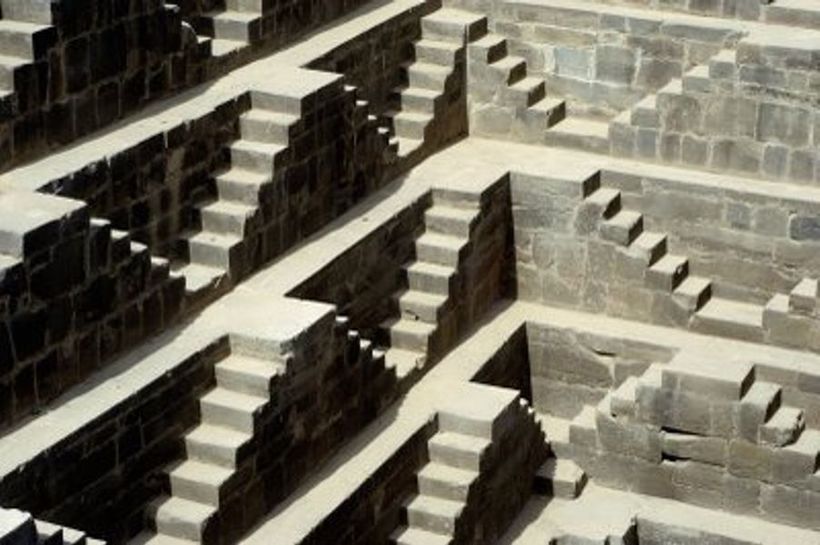 Stepped wells were built only in India, Chand Baori is one of the deepest.

In ancient times, the waters of the well were also used to bathe and refresh oneself on a hot day.

The well also had a ritual purpose. 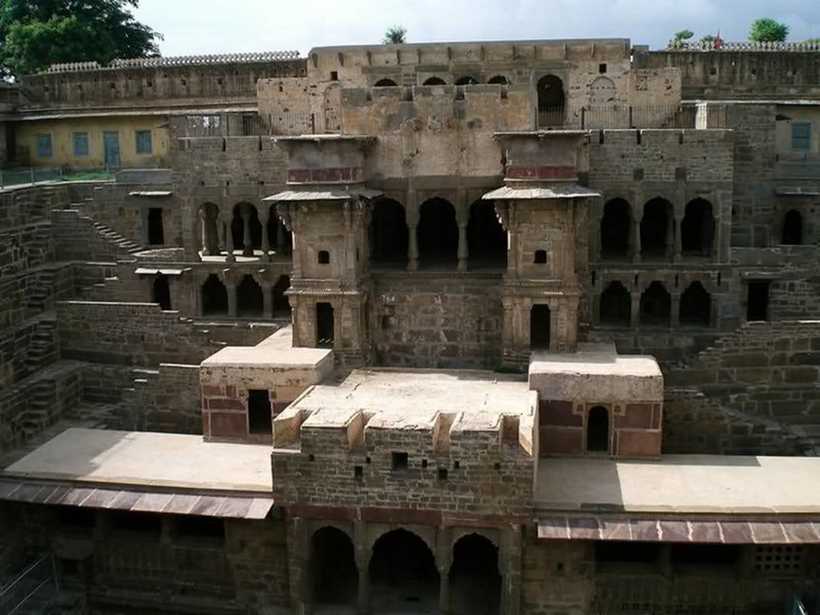 Next to the well is the temple of the goddess of joy and happiness Harshat Mata. 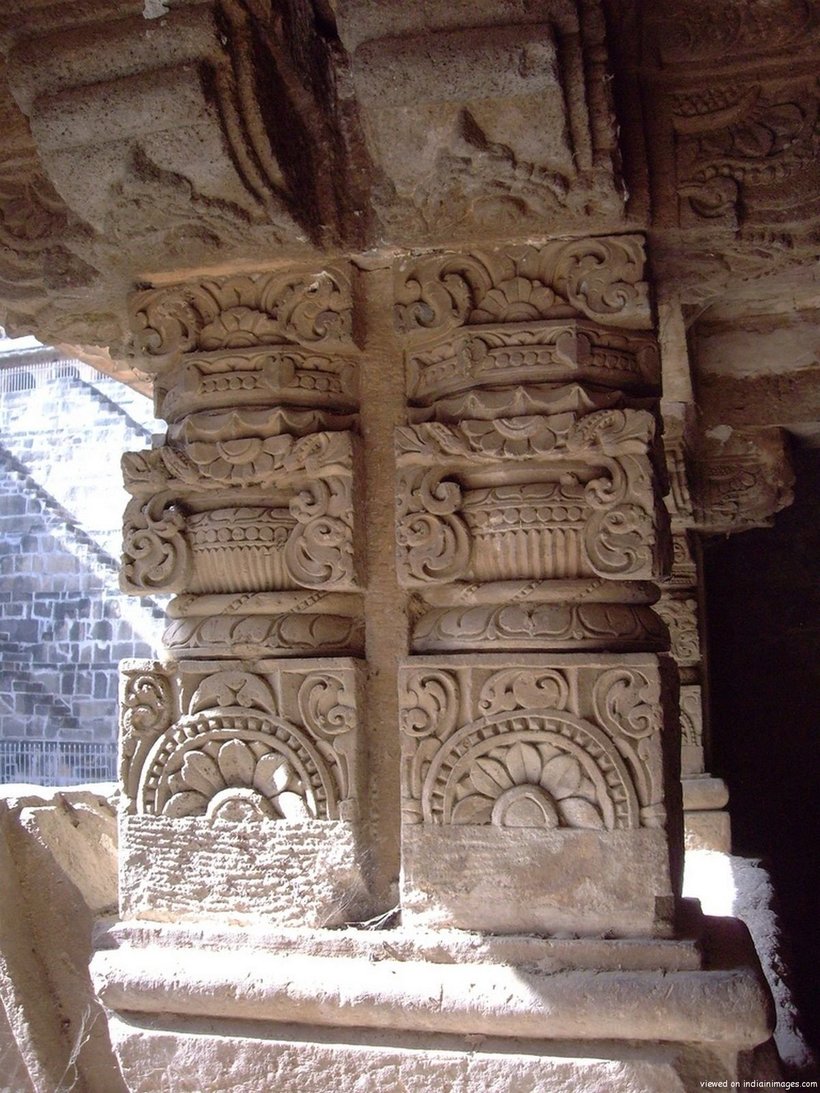 Those who wanted to go to the temple to pray would first go down to Chand Baori to wash their hands and feet. 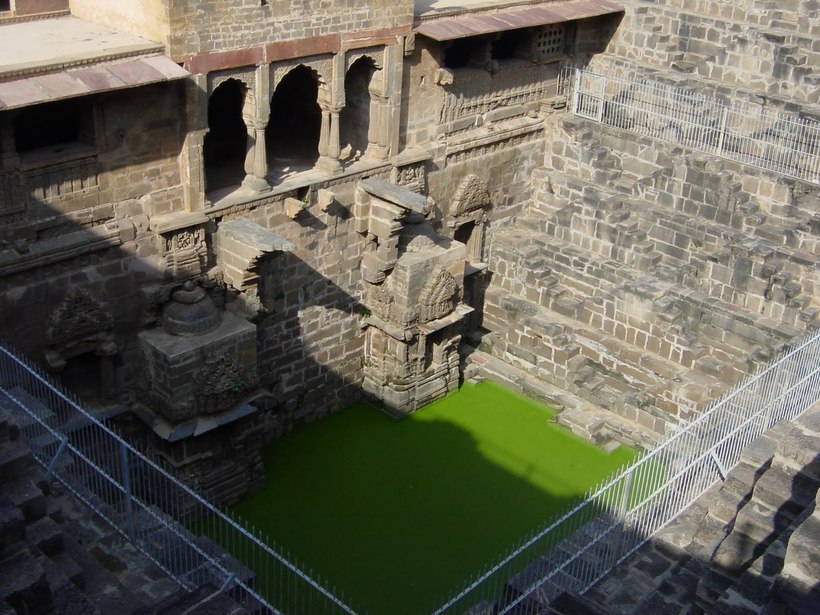 The walk down Chand Baori cannot be called entertaining. The abundance of steps requires a lot of stamina, and the absence of any fences adds more risk and danger. Therefore, to walk down to the water itself requires a certain amount of physical training. 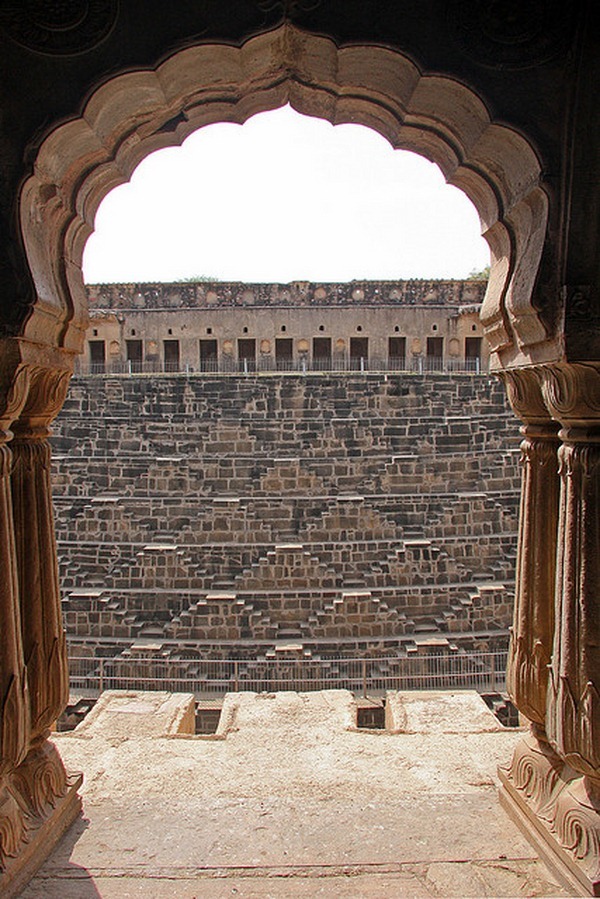 When you look at the well, you begin to think about the enormous work that went into its construction. 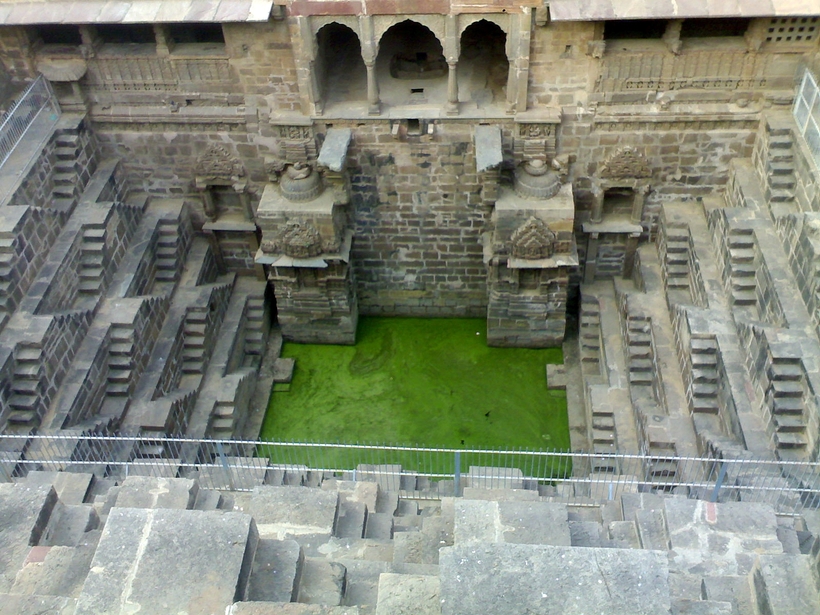 According to the locals, though, the well was not built by humans at all, so it did not cost much effort. Many people think Chand Baori was built by demons, and it took them just one night to do it. 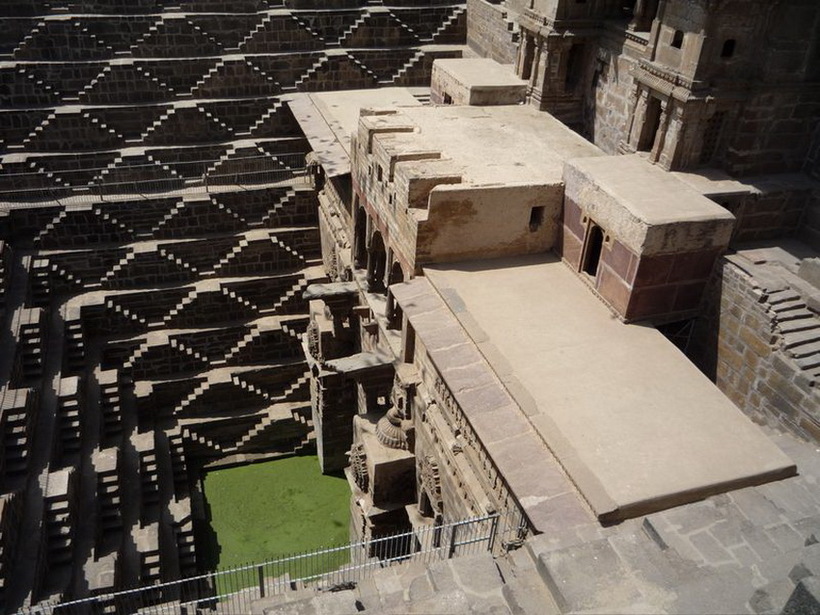 Few people can argue that the well is indeed a unique piece of architecture. 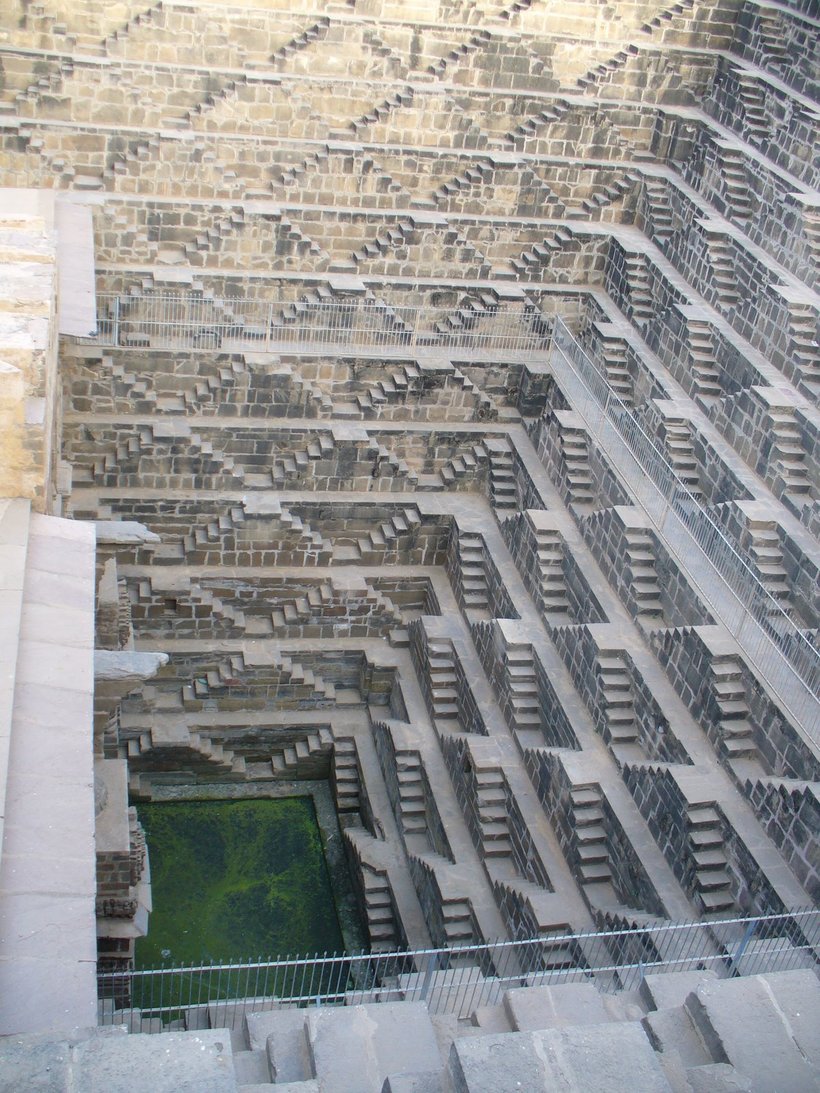 The water level in the well rises perceptibly during the monsoon season and can hold for several months. 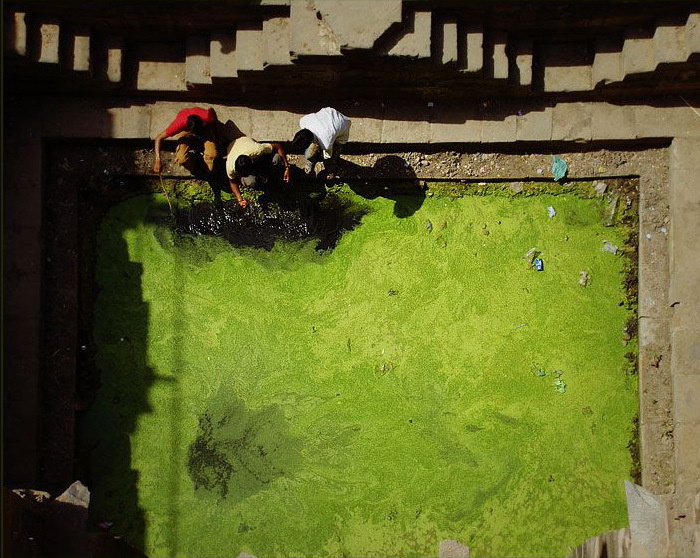 READ
Silent Zone in Mexico, all the truth about the anomaly

The sacred well of Goddess Bhairavi 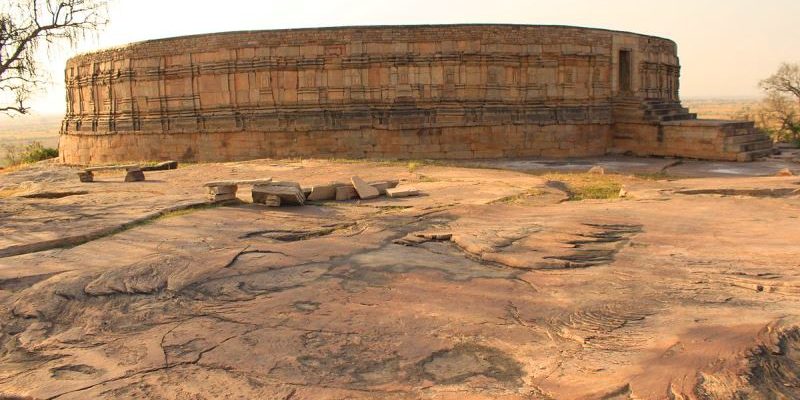 India is a country with thousands of years of history, a unique culture and many colorful architectural monuments. One of them is the well of Goddess Bhairavi, located in the mountains of the northern part of the country. I would like to note that accidentally came across a mention of this ancient place, the information about it is very contradictory, mainly in the search comes out “Rani ki-vav well”… But it is in a completely different place. 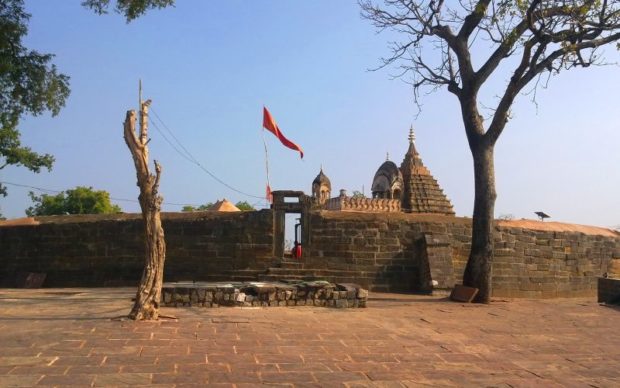 The strange well of Goddess Bhairavi

This place is sacred. The natives are convinced that the well of Goddess Bhairavi is her home. The deity herself was personified as one of the manifestations of Shiva, the energy of destruction. Wherever drunkenness, lust, anger and other base qualities flourish, the goddess’s presence is enhanced.

There is an opinion that the water here was “dead,” unlike all other stepped wells in India. 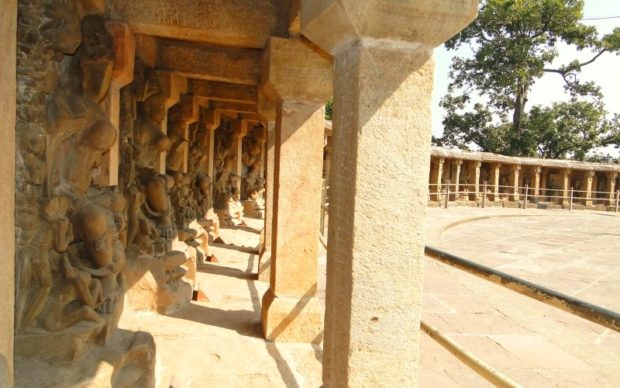 But Bhairavi does not like to be disturbed, she likes solitude and silence, so the Indians bypass her dwelling place, they believe that anyone who dares to violate the peace of the goddess, immediately catch up with punishment. And indeed with the well associated a lot of unexplained phenomena. One of these happened to a group of desperate daredevils who, despite warnings from the locals, dared to go down to the bottom of the well. None of them ever came back down. No one wanted to go in search of them. 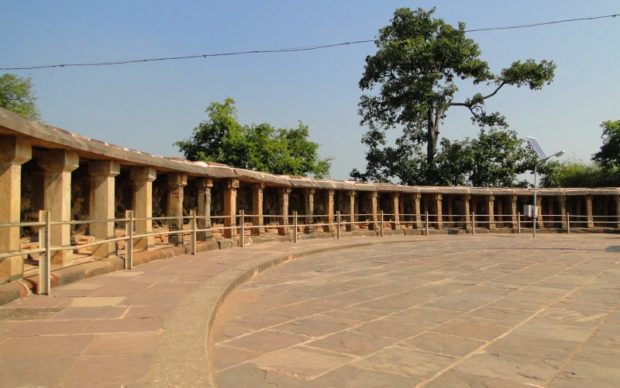 A case many times described

No less mysterious happened to one official. He, passing by a sacred well and having heard from the attendant the legend about it and about the daredevils missing in the well, decided to examine it. The attendant had to obey and show the civil servant the mysterious structure. After examining the area, and coming close to the well, the official spat into it, saying that the legend was complete nonsense. The punishment of Goddess Bhairavi immediately caught up with the irreverent civil servant. Before he reached his car, he lost consciousness and died two days later without waking up. 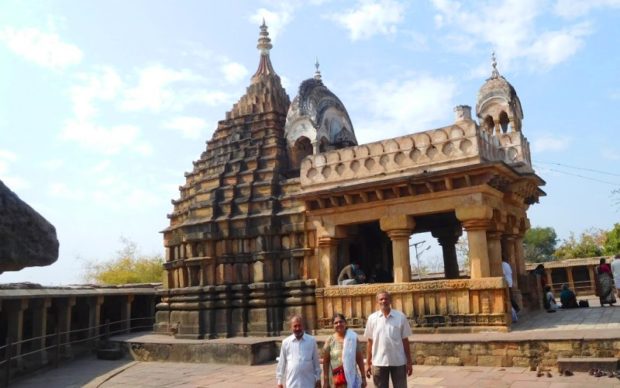 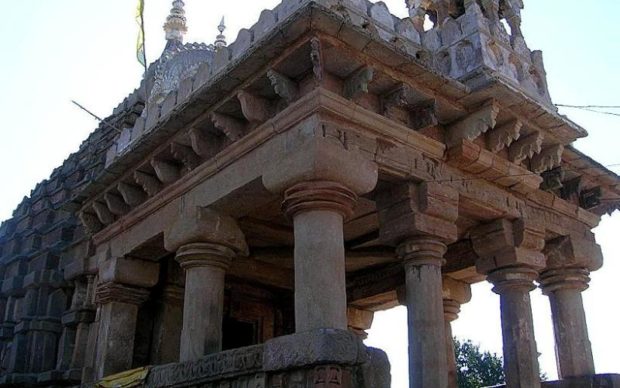 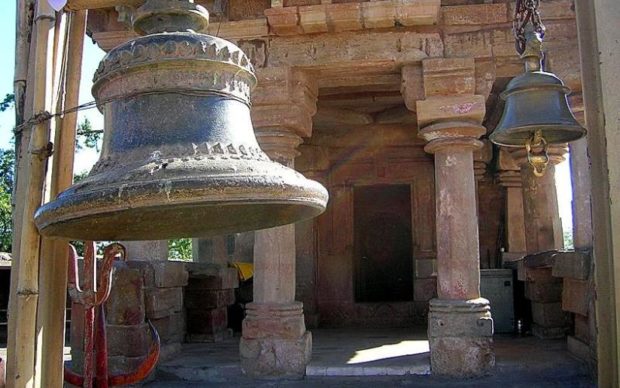 It is also noteworthy that animals avoid the sacred place and birds prefer to fly around it. From local residents you can hear the story of a rabid elephant that has long troubled them. It was last seen near the sacred well, after which the animal disappeared. 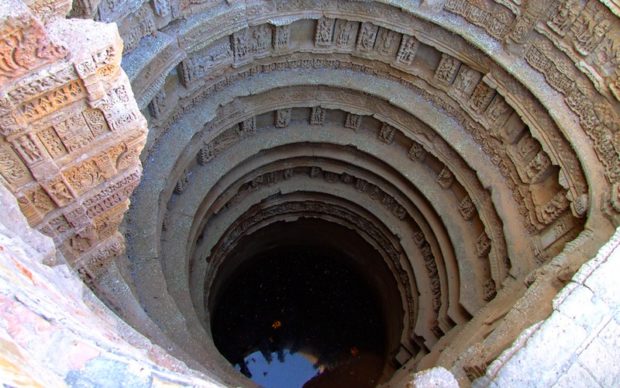 So far it has not been possible to record the depth of the well, in addition, on its surface often forms a dense fog, quite unusual for these structures. Scientists have not yet been able to explain the reason for its formation. According to popular beliefs, such places are lost in time, disappearing without a trace or appearing hours or even years later. Such places are the secret of our planet, the veil of which can not be opened, yet. The sacred well remains a mystery to scientists. Goddess Bhairavi jealously guards her home, punishing anyone who dares to disturb her peace.