Great Barrier Reef – why a unique natural attraction is dying 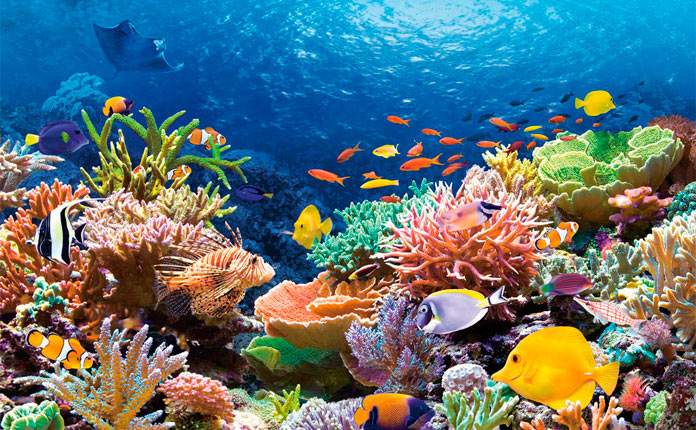 A unique ecosystem, the world’s most interesting natural attraction and the largest coral system in the world – all this is about the Great Barrier Reef in Australia. Its area is more than 34 million hectares, it is about the size of such a country as Germany. Millions of tourists from all over the world come to see this natural wonder. This amazing ecosystem attracts not only travelers but also scientists, photographers and divers. The Australian economy generates more than $6 billion a year from the use of the Great Reef. Unfortunately, climate change and human activities have caused the Reef to gradually die. The national government, environmentalists, and conservation organizations are trying to remedy the situation and save the world’s largest coral system. Below are photos of this unique underwater world and a brief description of it. 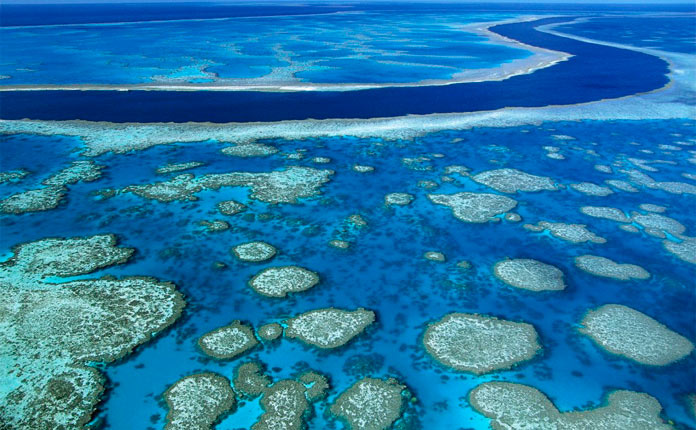 Where is the Great Barrier Reef

The islands are usually reached from two cities, Cairns or Brisbane . Brisbane is easily accessible by air from Melbourne and Sydney. According to tourist reviews, there are mostly dead reefs near Brisbane. This is why many people prefer to fly to Cairns, although it is farther and the flight is more expensive.

The reef is 30 km from Cairns, Brisbane and other coastal towns. It is easy to find water transport to one of the islands in any of these towns.

If you are interested in more than just the Great Reef and want to see Australia, you can get from Sydney by rental car. The cost of renting a car, depending on the class of the car from 25 euros a day. The distance from Sydney to Brisbane is 900 km.From Sydney to Cairns – 2 400 km.

History of the Great Barrier Reef 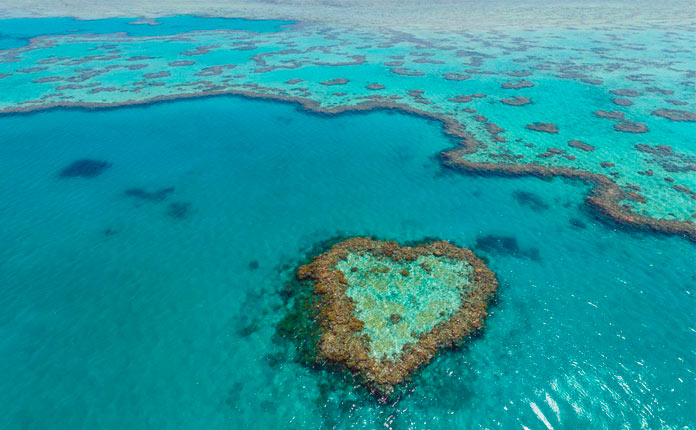 The GBR dates back to a time when Antarctica and Australia were one continent. Millions of years ago, the continent was washed by cold waters unsuitable for the reproduction of polyps. Gradually, the microbes moved to the warmer part of the continent that was more suitable. This process coincided with a change in water levels and active tectonic processes, with the result that Australia became a separate continent and shifted into the tropics. Conditions most suitable for the reproduction of coral polyps were formed.

The Great Reef began its formation 25,000,000 years ago; it consists of many layers, each of which took 10,000 years to create. The most active period of reef growth is the last 8,000 years. The formation of the reef continues today. Younger reefs are up to 20 meters deep and are placed on top of older formations.

Europeans first learned about the Great Reef after English navigator James Cook visited Australia.On the sailing ship “Endeavor” he sailed through the narrow strait between the mainland and the Great Reef. It was not an easy voyage – a difficult fairway, lack of maps, shoals and underwater rocks and so 1,000 km. It was not without damage. The ship was punctured and some of her cargo and guns had to be thrown overboard. Thanks to this, the Endeavour made it to shore.

This is interesting. The cannons and other items discarded from the “Endeavour” were raised from the bottom in the 1970s. Today they are preserved in a museum. One of the cannons has been installed on Greene Island.

From the time of Australia’s discovery to the present day, hundreds of ships have been wrecked in the area of the Reef. The last of them perished already in the XX century. Even the place names here are rather pessimistic – Tormented Bay, Cape Bede.

The first sailor who was able to sail along the entire reef from the land side was Charles Jeffreys in 1815. This area was fully explored and mapped only in the 40s of the XIX century.

In the 70’s an oil tanker sank, only by sheer luck it did not lead to the death of the reef and its inhabitants.

Description of the reef

Ridge of reefs and islands occupies a huge area, according to Wikipedia – 348,698 square kilometers.

Over millions of years, parts of the coral reef have become islands, although much of it is still hidden underwater today. Some sections rise above the surface of the ocean at low tide.

READ
Tenerife, what to see on your own

In order to preserve this unique natural attraction, a National Park was established in 1979, which covers more than 5,000,000 hectares. The main purpose of the park staff is to protect the fauna and flora. The park is listed by UNESCO .

The Barrier Reef consists of separate formations, there are almost 3,000 of them. They vary in size. The smallest from 0.01 square kilometers, the largest up to 100 square kilometers. They are surrounded by over 500 barriers.

This is interesting. The coastal waters around the Great Reef are up to 35 meters deep. The outer reefs are up to 2,000 meters.

The GBR is 10% of the planet’s coral reef area.

Who created the Barrier Reef?

The BBR has creators: coral polyps, small living organisms. It is thanks to them that over hundreds of thousands of years, such a unique and large-scale natural structure appeared. Coral polyps have a calcareous hard shell. These shells and form corals, for this there must be a lot of them. This process is still going on today, although it is difficult to notice. Coral growth is slow. At about 5 cm per year.

The MDB is a complex and huge ecosystem. It is not only coral reefs, but also fish, animals, algae, polyps. More than four hundred species of corals live within the Great Reef. They come in soft and hard, and vary in color and shape.

The GBR is home to crabs, crayfish, lobsters, sponges, actinia, starfish, and sea urchins. The ichthyofauna in the Great Reef area is enormous – 1,500 species of fish live among the corals. About 500 species are reef fish. They are distinguished by their bright colors. Interesting and their names – clown fish, parrot fish, butterfly fish, sea dogfish, etc. Sharks, moray eels, stingrays and many other fish and sea creatures are found here.

The waters near the reef are inhabited by whales, whale sharks (the largest), dolphins, sea cow. Large sea turtles come to the South Reef islands to breed. 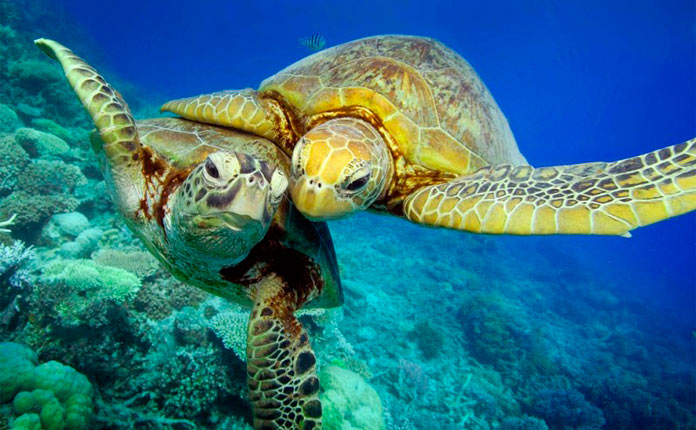 This is interesting. Turtles lay their eggs on beaches in dug holes, then fill them up and swim away. Baby turtles dig themselves out and try to get to the sea on the beach. Few of them succeed, and most of them die. Predatory birds begin to hunt the little turtles. They grab the babies, which do not even have a shell, and carry them away. Only a small fraction of the little turtles survive, and manages to get to the saving water.

You can find here blue-bellied octopus, which, despite its small size (15 cm), are lethal for humans. One octopus contains a poison that can cause the death of more than 20 people, it paralyzes the victim, and the person remaining conscious can not move

More than 200 species of birds live on the BBR.

But the vegetation on the islands of the reef is not so diverse, only 40 species.

The Great Reef ecosystem is quite vulnerable. Scientists and environmentalists have long been sounding the alarm. Panicked publications appear in the press about the demise of the GBR. Journalists tend to exaggerate the danger, although the state of the reef is indeed alarming. Factors leading to the death of corals include:

All of the above factors affect the Reef’s ability to recover. But the Australian government, environmentalists and volunteers are not going to watch whether or not the Reef itself can cope with the problems that have arisen. Programs have been developed to save the natural landmark, the Great Barrier Reef Foundation has been established, and commercial and non-profit organizations are providing money to carry out the necessary activities. Thousands of volunteers from around the world come to Australia to help save this unique natural site.

READ
When are the white nights in St. Petersburg in 2018

More than 2,000,000 tourists visit the Reef and its islands every year. The place especially attracts snorkelers. You can dive in any season, but the most favorable time is March – June. Here will feel comfortable and beginners and experienced divers. Diving is the main type of tourism in the Big Reef region.

Description of some islands

Heron. It is considered the best resort for divers. Those who want to make an underwater trip come here and enjoy the beauty of the reef. The island is surrounded by white sandy beaches. Getting to the island is easy by helicopter or boat from Gladstone. Visitors to the island are offered shallow-water hikes, clear-bottom boat rides, night diving, and fishing. 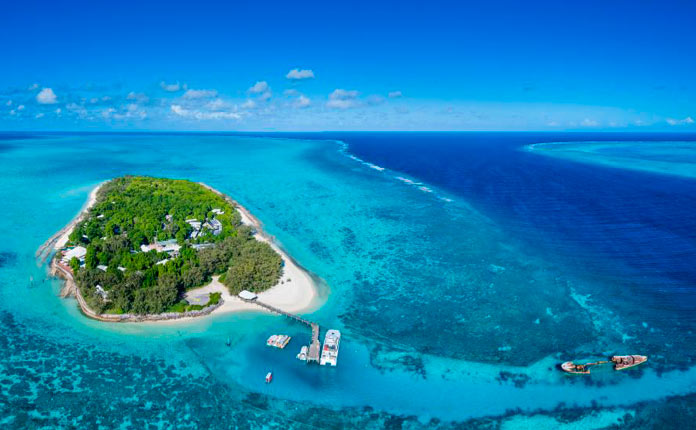 Dunk. The island is ideal for romantic and family vacations. It is very beautiful – a dense tropical forest with exotic birds and butterflies. Tourists are offered horseback riding, snorkeling, fishing. 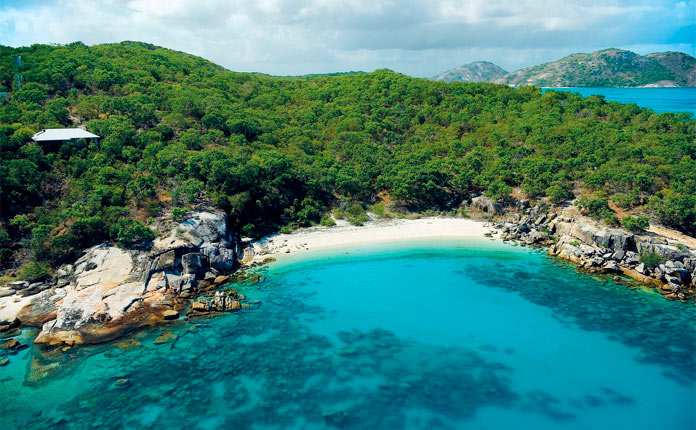 An expensive resort with a high level of service. You can sunbathe and swim on one of 24 beaches. It is on this island is the most popular place for snorkelers – CodeHole. Guests are offered to visit the Clam Garden, the Research Center, restaurants, tennis courts, a tour of the reefs.

Gamelton. The island is kid-friendly and known for its boutiques. 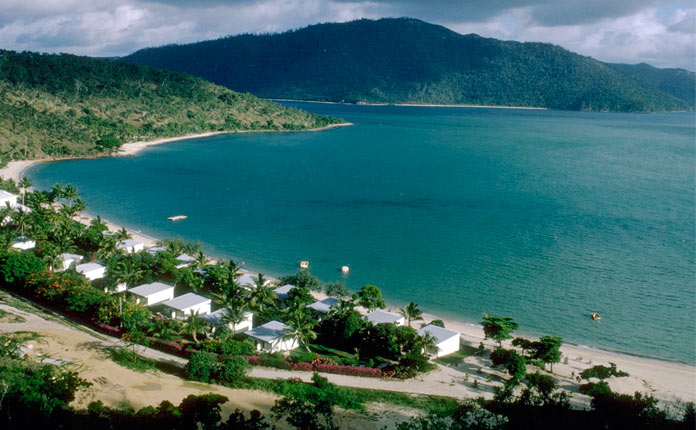 A private island loved by honeymooners and lovers. It has everything you need for a vacation. Numerous restaurants where you can try exotic dishes. Excellent conditions for diving and other sports activities.

What else to see and do

Beach lovers are advised to stay in the part of the Great Reef, located 30 km from the mainland. Here you can swim all year round. Good beaches are on Trinity Beach, Palm Cove and Port Douglas. There are places where swimming is prohibited because of jellyfish. Touching these sea creatures can get poisoning, and it is difficult to see them in the water. Swim only in wetsuits and in fenced areas.

But not only on the beach you can spend time, tourists are offered to visit several interesting attractions.