The Green Lake (Grüner See), which appears in Austria during the summer, refers to a unique natural phenomenon. It is a wonderful place where dreams border on reality.

In fact, Green Lake is an ordinary park, which is located at the foot of Mount Hochschwab . In the winter season, August through April, it is a beautiful park with abundant green vegetation, clean air, shady manicured alleys, comfortable benches, and small lakes that are spanned by wooden bridges. But the park silence and coziness can be enjoyed only from August until mid-spring. With the beginning of summer all this beauty is underwater. 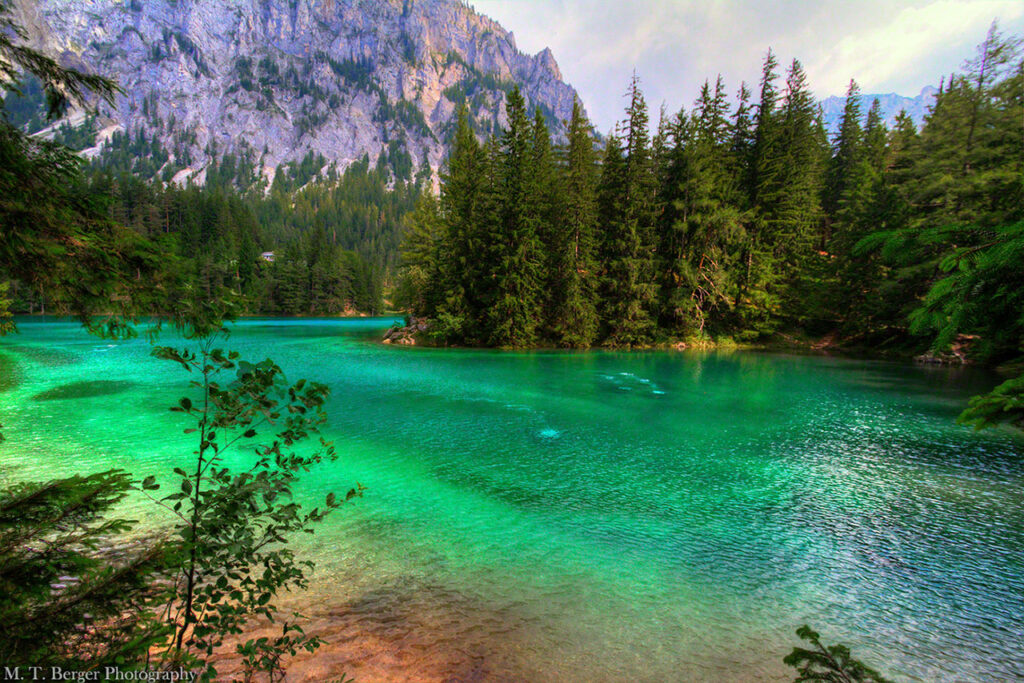 The snow covering the mountain peaks gets very hot with the arrival of spring. Hot sunlight penetrates the mountain slopes and the snow begins to quickly turn into water, which flows down the slopes right into the park. In a short time the park is completely taken over by the mountain water currents and is under water . It turns into a 12-meter deep lake called Grüner See. But in July the water gradually recedes, and by the end of the summer it turns into several small puddles no deeper than two meters. This is how the “phantom” lake appears in Austria every year. 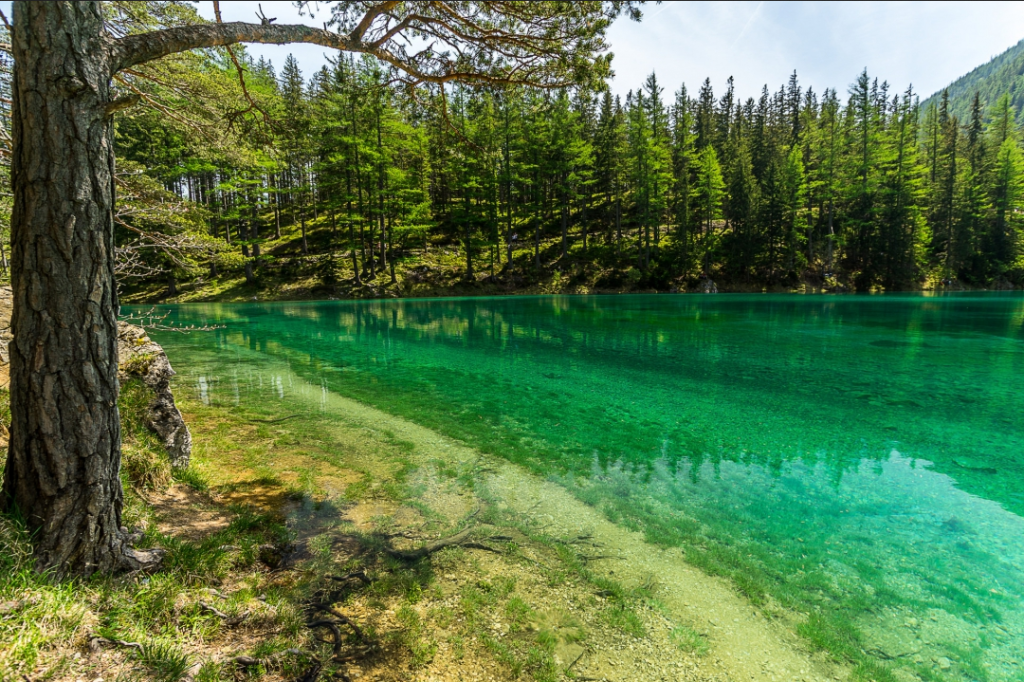 Tourists and diving enthusiasts rush to see the Green Lake and go to Austria with the beginning of May. The lake is among the cleanest bodies of water on earth. The melted mountain water is renewed every year, and therefore remains crystal clear.

The underwater park looks completely different than in the “real” form. Visitors get the impression that they are present at a small ghostly Austrian Atlantis, which will eventually disappear from the face of the earth. 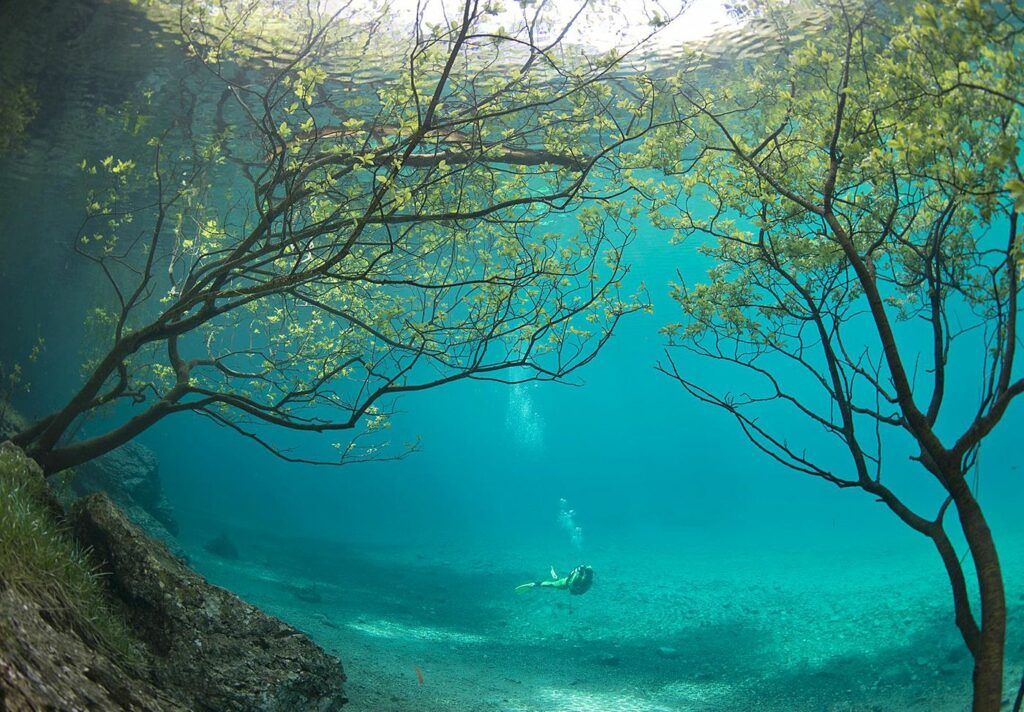 Another fact that fascinates tourists in Green Lake is the appearance of aquatic fauna in the form of fish, clams, snails, crabs. The local population still does not understand where they appear in the lake. And the birds that inhabit the “water park” leave it in the summer.

Surrealistic earthly world sinking into the water attracts thousands of tourists from all over the world to Austria. The lake is especially popular with divers, who come here to enjoy the unusual water scenery: wooden benches, near which the fish swim, bridges, trees, grass and meadow flowers. The underwater fauna of the lake leaves unforgettable impressions in the memory of visiting guests. 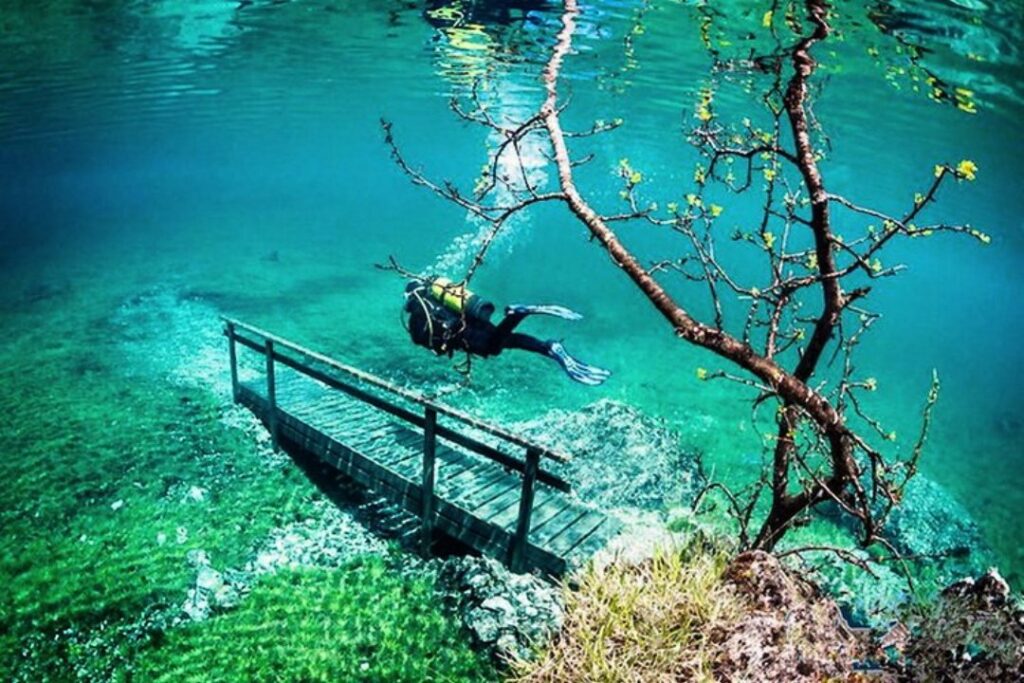 The lake is surrounded by mountains, forests and flowery alpine meadows that bloom only in the summer. The air bubbles that accumulate on the leaves of the trees sparkle underwater and shimmer with all the colors of the rainbow.

By the end of summer the water leaves the park completely, leaving behind small lakes. In winter you can come here to relax, take a break from the bustle of the city, enjoy the view of the majestic mountains and the clean air. You can sit on a bench, admire the mountain scenery or take a walk along the forest paths. 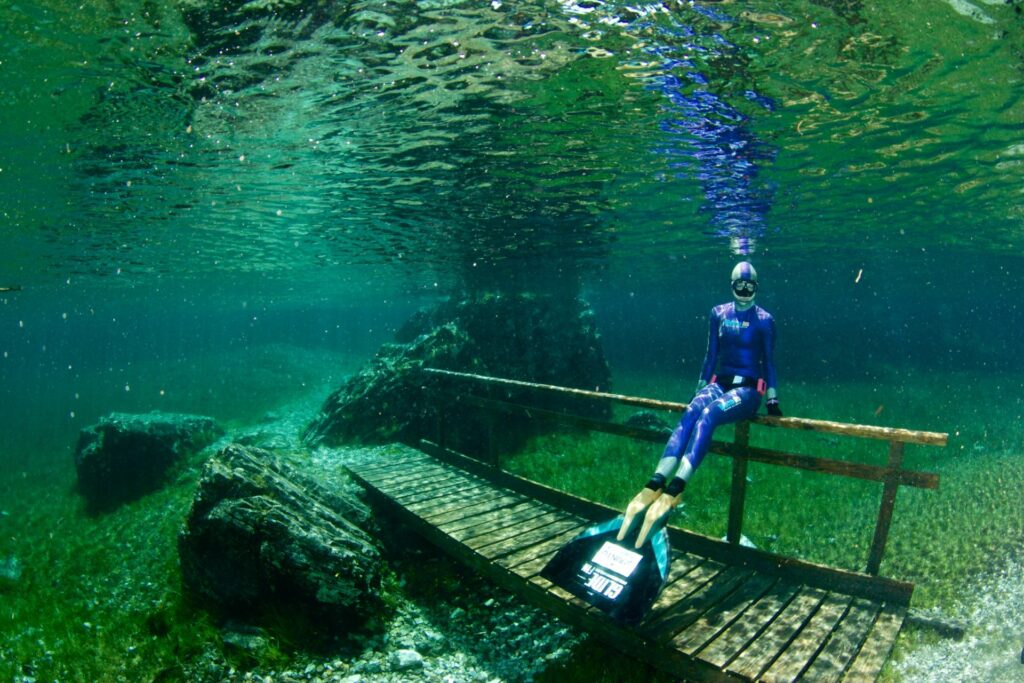 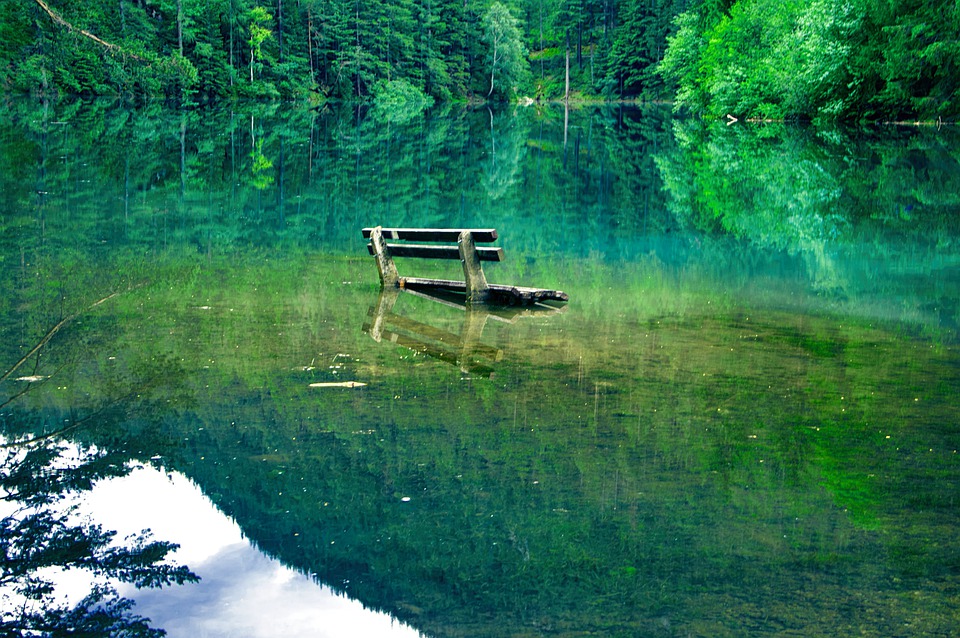 Russian Wikipedia contains little information about Green Lake, but it remains the only natural phenomenon of its kind on the entire planet. Grüner See is an unusual and picturesque natural phenomenon, which can be observed only in Austria.

In Austria, near the town of Tragoss, at the foot of the Hochschwab mountains is a wonderful natural wonder – Gruner See, which means “green lake” in Russian.

In winter, this quiet place, surrounded by mountains, is used as a park with walking paths, benches, greenery, and the lake Gruner See is just a supplement to the surrounding harmony. But in the spring, when it gets warm, the snow and ice accumulated on the mountain slopes begin to melt, and the meltwater rushes to the bottom, filling the lake.

That’s when the Green Lake shows its power: from a 1 to 2 meter deep lake it turns into a luxurious body of water, and its depth reaches 12 meters. Beneath the surface of the Grüner See lies the entire park with its paths, benches and lawns. People who have seen this unique phenomenon with their own eyes claim that the lake is most beautiful exactly during the flooding period.

The green lake got its name because of the color that gives it the grass and leaves, which in turn are clearly visible in the clean and clear water. Because of the exceptional transparency of the water, Grüner See is very popular with divers, the maximum number of which is observed here in June, which is when the lake is filled with water.

Every diver considers it his or her duty to be here at the moment of flooding, and in spite of the fact that the water temperature does not rise above 5 degrees, those wishing to look at the Alpine meadows under water increases every year. And they live up to expectations and appear before the audience in all their glory, along with paths, benches and gazebos. This place leaves no less impression than the underwater cities of the Lake of a Thousand Islands in China.

In August the Gruner See returns to its normal size, allowing tourists to walk along the paths, lie on the benches and make small talk in the formerly under water gazebos.

Do you like the article? Subscribe to the channel to keep up with the most interesting materials