The cemetery was formed in 1561 on the site of a Franciscan monastery, the area is located around the church of Greyfriars.

The streets of Edinburgh delight visitors with bright festivals and the architecture of ancient cathedrals and castles, filling the hearts of visitors and residents with light. At night, Edinburgh reveals a darker side of Scotland.

The city is haunted more than any other part of the country, and Scotland is renowned for its ghosts at every turn. The most mystical place in Edinburgh is Greyfriars Cemetery.

The entrance to the cemetery is decorated with lots of engravings in noir style – skulls, bones and other “deadly” symbolism.

Buried at the gate is Bobby – a dog that guarded the grave of his late master for 14 years, leaving only to find food or hide from the bitter cold of winter. Soon the dog was spotted, and every visitor to the cemetery fed him, thus eliminating the need to look for food. This dog served as one of the main prototypes for the movie “Hachiko.

In the cemetery itself, the bars over the graves are immediately striking. The first thing that comes to mind: the local dead are so “cheeky”, regularly rising from their graves, that the most zealous of them closed the exit of the thick iron bars. In fact, everything is much more prosaic: such fences protect tombs from grave robbers (it is one of the most popular “professions” among Edinburgh marginals).

But the grates on the graves are the most optimistic note in the cemetery’s history.

As we move deeper south into Greyfriars, most visitors have a titillating urge to rush off toward the cemetery gates – here the guide program usually reaches Covenanter Prison.

The political movement of the Covenanters existed in Scotland until the 17th century. One of the main ideas of the Covenanters during the Restoration was the overthrow of the current royalist regime. Decisively, the king was opposed to putting power in the hands of the Presbyterian Church and raising turnips in the small manor he had been promised to keep in the event of abdication, and he took drastic measures. All the covenanters of the opposition were imprisoned in what became the crypt at Greyfriars. The prisoners were demonstrably kept in inhuman conditions: they were starved to death, given a rusk once a week, and water was brought to them at the rate of a pint a day – less than half a liter.

Lord John Mackenzie, later nicknamed Bloody John, was put in charge of Covenant Prison and its warden. He passed death sentences on prisoners, often carrying them out by his own hand out of excessive cruelty. About eighteen thousand prisoners were killed personally or on his orders. After his death, Bloody John willed that he be buried in a nearby crypt at Greyfires so that he could continue to look after the prisoners after his death. Apparently, Mackenzie hated people so much that his plan came true: after the hangman’s funeral, people began to notice a strange figure woven of mist at his grave.

Mackenzie’s ghost is considered one of the most “documented” ghosts in the world.

Moreover, this rebellious spirit is particularly aggressive toward the living: most people who have encountered it have received bruises, abrasions, and even cuts. There have also been cases of broken bones right in front of tourists – you can find records of this in the archives of Edinburgh’s hospitals if you wish. In more optimistic cases people simply fainted from his presence. When the authorities ran out of patience, they closed the cemetery and people did not set foot there until the enterprising Scots saw fit to capitalize on the mystical attraction.

According to victims’ accounts, Mackenzie’s appearance was always accompanied by a sudden “frostbite” in the air around the victim. Guests of Greyfires, before passing through the cemetery gates, are necessarily read instructions on how to behave in the event of an encounter with a ghost, and are shown the conventional signs that will show the guide that something untoward is going on. It is not advisable to talk about it aloud – as a rule, the ghost only intensifies its attacks after talking about it. Besides Mackenzie, however, there are other unfriendly spirits in the cemetery, but Bloody John surpasses them all in quantity and quality of appearances.

READ
Where is the lighthouse of Alexandria, the wonder of the world

Most of the horrors take place in the southern part of the cemetery, but the rest of Greyfires is much quieter. The famous J.K. Rowling, the author of the Harry Potter saga, often comes to the cemetery to retreat and find new inspiration among the graves. By the way, the names of many characters in the saga were simply rewritten by Rowling from the gravestones of Greyfriars. The grave of Thomas Riddle, Lord Voldemort, has become one of the most popular places of pilgrimage for Potter fans.

Greyfriars is one of the best places for devotees of “mystical tourism,” and no paranormal researcher has been unsatisfied with a visit to this cemetery. Perhaps because the disgruntled, evil ghosts don’t let go alive . 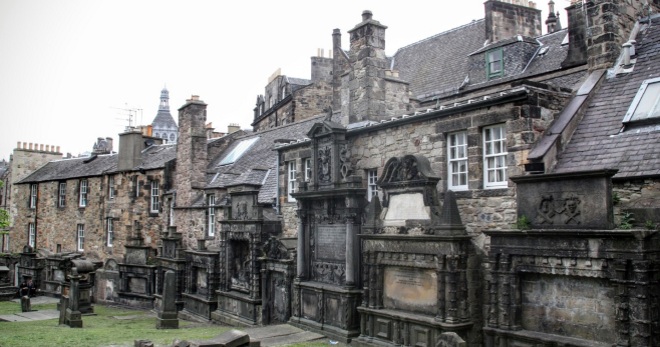 One of Scotland’s most famous landmarks is Edinburgh’s Greyfriars Cemetery: it is visited by millions of people every year and is listed as an “A” cemetery on the country’s list of attractions.

Greyfriars Cemetery in Edinburgh is one of the oldest in Scotland and was founded in 1561. It got its name from the church of Greyfriar, located in the center.

Many famous Scots are buried here, including:

Surprisingly, the most visited is Bobby the dog’s grave, located at the cemetery gate. Skye Terrier 14 years lived at the grave of his master buried there, not leaving his post for a minute. 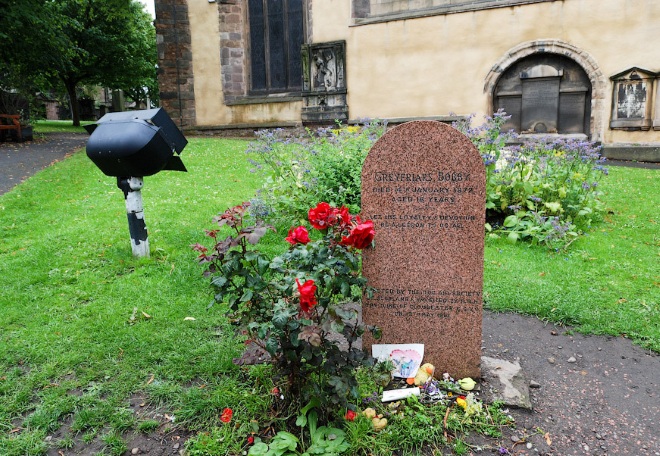 Many Scots believe in mysticism, and ghosts in different places in Scotland – a phenomenon often even documented: Greyfriars Cemetery in Edinburgh was no exception. For example, one of the most “documented” ghosts in the world is a certain Bloody John, who in his lifetime was called John Mackenzie, and who worked in Covenant Prison. Mackenzie not only imposed many death sentences, but often carried them out himself, “taking part” in the extermination of over 18,000 people.

It is difficult to say whether he became a ghost as a punishment or as a reward. Mackenzie willed to bury himself in this very cemetery, so that after his death he could “look after” his victims buried there as well. According to those who had an encounter with Red John, the ghost is extremely aggressive – many after the meeting could “boast” of bruises, abrasions and cuts, and some – even fractures, which, incidentally, occurred in front of tourists and were also documented.

Administration of the cemetery even closed it to visitors for a while, but tourists are curious people, and the presence of “aggressive ghost” attracts them here even more. Therefore, before visiting Greyfriars, tourists are read instructions on what to do when meeting with Bloody John. 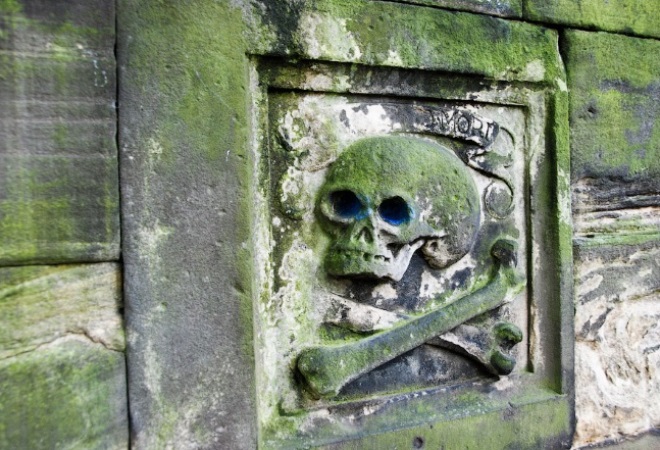 The local church deserves a separate mention. It is the oldest structure outside of Old Edinburgh. It is famous for being the first Presbyterian church to have a stained-glass window and an organ. Services are held there on Sundays. 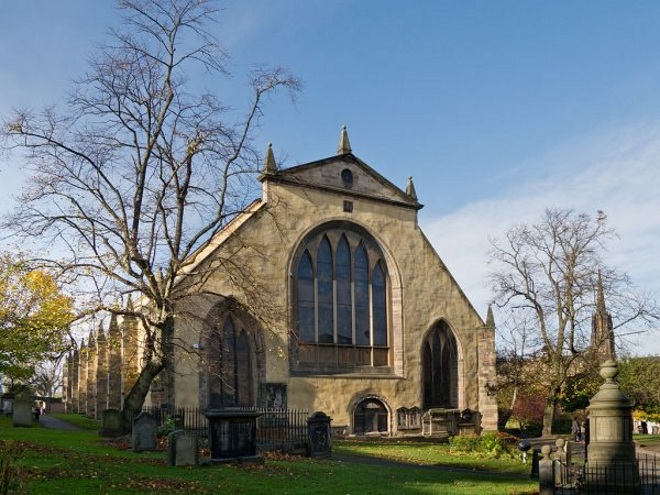 A Cemetery in Literature

Those who have already been to Greyfriars Cemetery in Edinburgh know exactly where Tom Riddle’s grave is – which, we recall, was originally the name of Voldemort. To visit this grave every year comes a lot of fans of the series about Harry Potter. And the explanation for this fact is very simple: Joan Rowling often visited this cemetery in search of inspiration, and the names for some of her characters simply rewrote from the tombstones.

How to visit the landmark?