Map of the Department of Guadeloupe before the separation of the overseas communities of Saint-Barthelmy and Saint-Martin in February 2007.

The country has a population of 405,000 (2006), mainly blacks and mulattoes. The state language is French. The religion is catholic.

The department is governed by a prefect appointed by the French government. Guadeloupe is represented in the parliament of the French Republic by three deputies and two senators.

The town of Basse-Terre is the administrative center. The second largest city is Pointe-à-Pitre. The currency is the Euro (EUR, code 978). Time zone is UTC-4. Phone code – 590. Internet domain – .gp.

Guadeloupe was inhabited from 300 B.C. by the Arawak Indian people who practiced fishing and agriculture. The island was then settled by the Caribs, who expelled most of the Arawaks in the 8th century and named the island Carouquera, which meant Island of Beautiful Waters.

On his second voyage to the Americas, Christopher Columbus became the first European to set foot on Guadeloupe on November 4, 1493. He named it Santa Maria de Guadalupe of Estremadura after a Spanish monastery.

The French took possession of the island in 1635 and exterminated many Caribs. The French established sugar cane plantations on Guadeloupe and brought in negro slaves from Africa to work on them.

The island was officially declared property of the French crown in 1674. However, in the 17-18 centuries, the British several times tried to seize Guadeloupe (in 1666, 1691 and 1703). In 1759 they succeeded in capturing the island, but by the Treaty of Paris in 1763 Guadeloupe was returned to France.

READ
The world's 100 most beautiful and famous islands

Guadeloupe’s prosperity at the time is evidenced by the fact that under this treaty France renounced its territorial claims in Canada in return for the United Kingdom’s recognition of Guadeloupe as a French possession.

Attempting to capitalize on the turmoil of the French Revolution, Britain attempted to seize the island in 1794 and held it from April 21 to June 2. The French recaptured the island under the command of Victor Southern, commissioner of the Convention, who abolished slavery, armed the Negro population, and expelled the British and the slaveholders who controlled the sugar cane plantations.

Guadeloupe remained a de facto independent republic until 1802. But when the threat to the American possessions of France by the English intensified, Napoleon sent troops to quell the rebellion and restore slavery. Louis Delgre and a detachment of revolutionary soldiers committed suicide on the slopes of the Matuba volcano when it became clear that the invading troops would take control of the entire island. Occupation forces killed as many as 10,000 Guadalupeans in the process of restoring “order” to the island. In 1805, the French Civil Code was enacted on the island.

On February 4, 1810, the British recaptured the island and held it until March 3, 1813, when it was ceded to Sweden at the end of the Napoleonic Wars. Sweden already had a colony in the region, the nearby island of St. Barthélemy, but just one year later Sweden ceded the island to France under the Treaty of Paris in 1814. A subsequent agreement between Sweden and Britain marked the beginning of the Guadalupe Foundation. French control of Guadeloupe was finally recognized by the Treaty of Vienna in 1815 and consolidated by the Treaty of Paris in 1816. Slavery on the island was abolished in 1848.

The colonizers’ domination led to a one-sided development of Guadeloupe’s economy: only the export-oriented branches of agriculture (sugar cane, bananas, coffee, and cocoa) were developed. At the end of the 19th century a number of industrial companies for processing agricultural products were built.

READ
Maldives. Travel and vacation in the Maldives.

In 1946 Guadeloupe received the status of “overseas department of France”.

Until February 22, 2007 the overseas department of Guadeloupe also included Saint Barthelemy Island and the northern part of Saint Martin Island (the southern part belongs to the Netherlands). Their territories now form separate overseas communities within France – Saint-Barthelmy and Saint-Martin.

In January 2009, there were riots in Guadeloupe, which later spread to Martinique.

The French Department of Guadeloupe is currently divided into two districts:

The Saint Martin-Saint-Barthelemy constituency of Guadeloupe, a third one comprising three cantons and two communes, had a population of 35,930 inhabitants in 2006. However, on February 22, 2007, the constituency voted to secede from Guadeloupe.

The island of Guadeloupe consists of two roughly equal parts separated by a narrow strait. The western part, Bas-Terre, means “lower” or “low land” in French. However, contrary to this name Bas Ter is mountainous, composed of volcanic rocks, and there is an active volcano Soufrière (1467 m) – the highest point of the Lesser Antilles. Grand Ter is, on the contrary, a plateau up to 130 m high, composed of limestone and volcanic tuffs. Guadeloupe is very seismic, especially Bas-Ter. The island is poor in minerals – there are only raw materials for the production of building materials and sulfur.

The climate of Guadeloupe is tropical. It is characterized by flat temperatures (24-27°) and significant moisture (1500-2000 mm of precipitation per year). The rainy season lasts from July to November. Sometimes tropical storms strike the island during this time. Despite the abundant rainfall, Grand Terre has very few permanent rivers, as the water goes into cracks in the limestone, but on the mountainous Bas Terre, the rivers are numerous and have a fast flow. Rainwater on the island is collected in reservoirs.

The mountains of Bas Terre are covered with humid tropical forests. During the colonial period they were severely thinning from logging, but nevertheless logging for export continues. On the Grande Terre the forests are already almost completely cleared.

The animal life of Guadeloupe is poor and consists mainly of birds, lizards, and small rodents. In 1880 mongooses were brought to Guadeloupe to kill the rats that were spoiling the sugar cane crops. The mongooses multiplied quickly and wiped out most of the rats but at the same time caused considerable damage to the island’s fauna – birds and small animals.

The sea waters around Guadeloupe are rich in fish, crustaceans and mollusks.

Religions: Catholics – 95 percent, Jehovah’s Witnesses – 2 percent (8,475, who were present at the Memorial Night of the Death of Christ – 21,952, 4.7 percent of the population). – There are Hindus, African cultists, and Protestants. 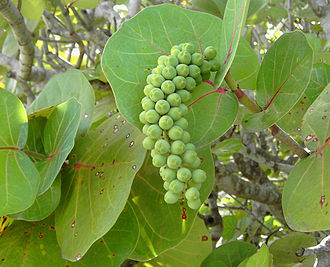 Guadeloupe is a backward agrarian country. Tillage is 27% of the territory, pastures and meadows 10%, forests 31%, other lands 32%.

About 2 thousand km of highways.

Guadeloupe’s education system is based on French law. Teaching is in French. Elementary school enrollment is at the age of 6. Elementary school is compulsory for 5 years. The duration of full secondary school (lycée) is 7 years, in part-time (college) – 4 years. Guadeloupe is home in part to the University of the Antilles and Guiana.

In January-February, Guadeloupe hosts an annual carnival. It is characterized by two types of carnival groups: those gravitating toward the European carnival tradition and those inheriting African culture [1] .

Guadeloupe is an overseas department of France in the West Indies. That is what it is officially called. The island has its own requirements for entry (not all Schengen will do, but more about that below), its own stamp at the border, so it is still perceived as a separate country. However, the influence of France, of course, is noticeable: the language, stores, products, traditions – almost everything was brought from there.

The island is divided into two parts (Bass Ter in the west and Grand Ter in the east), with Salt River Strait in between. The department includes several other small islands. The area is 1,628.43 km², the administrative center is Bas-Ter, and the currency is the euro. It is home to about 400,000 people. Here, I think I’ll finish with the officiousness. 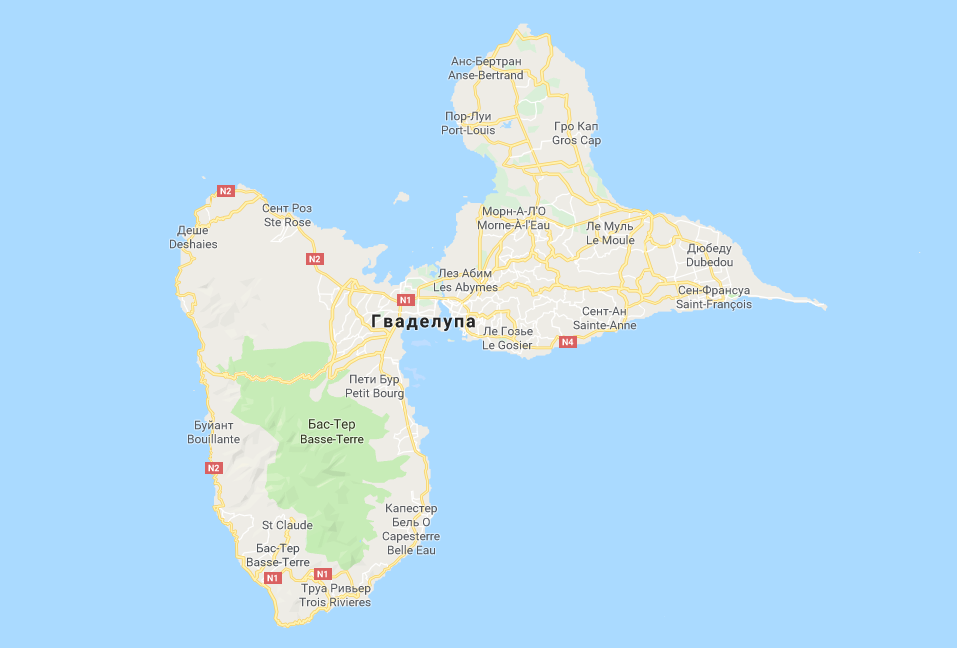 We did a lot of driving around the island, so the story of the trip, I’ve divided into separate posts.

The east part, which didn’t work out for us.

And just a selection showing how varied the water is on the island!

Life here is calm and measured. Cane is grown, a lot of banana fields, a few times saw cows … There is almost no own production. The only exceptions are sugar and rum. The largest city is Pointe-à-Pitre. It has a port and airport. But Guadeloupe is beautiful first of all by nature. Tourists are very few, almost all – from France. Many come for a beach holiday. 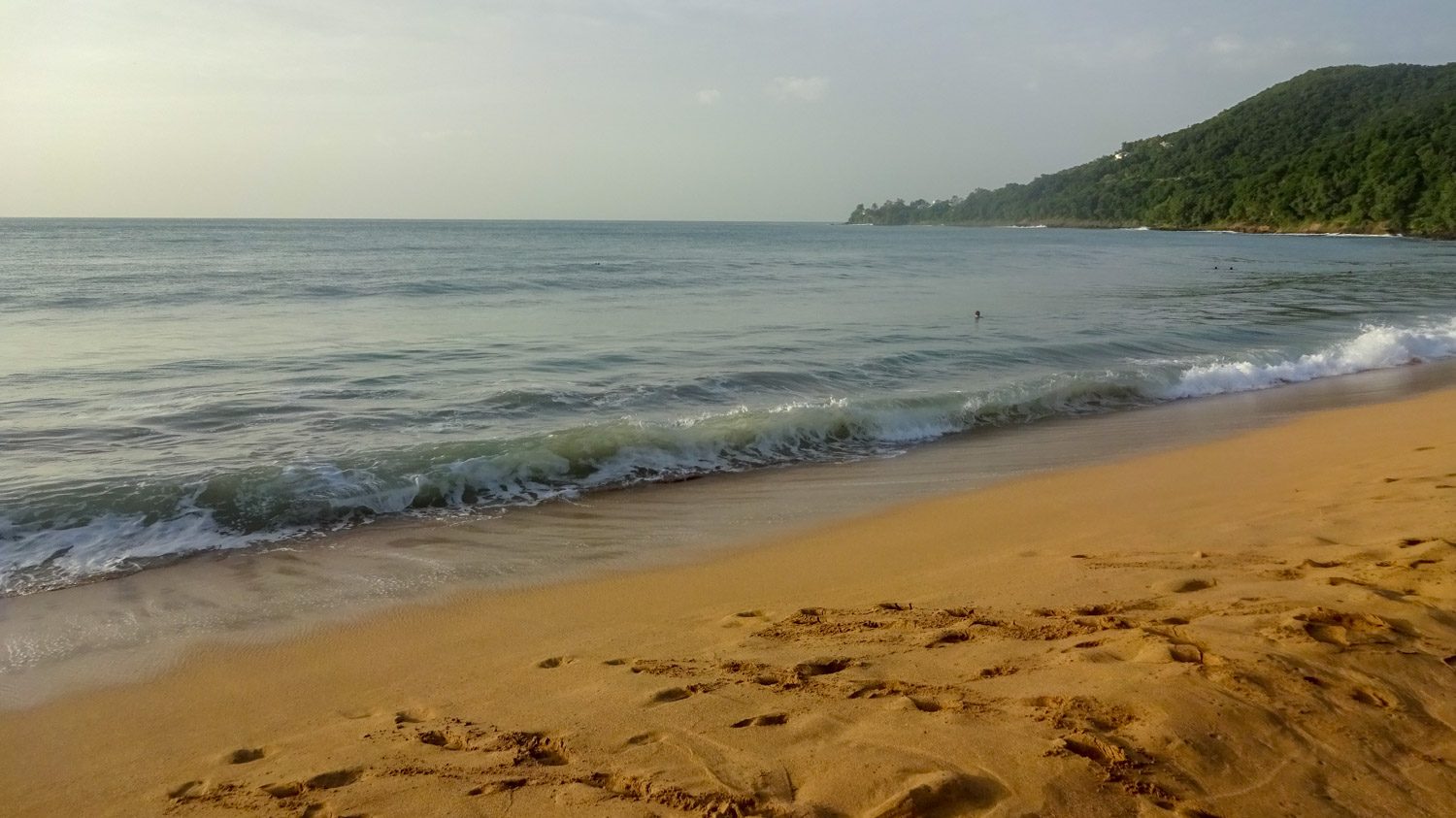 The beach in western Guadeloupe 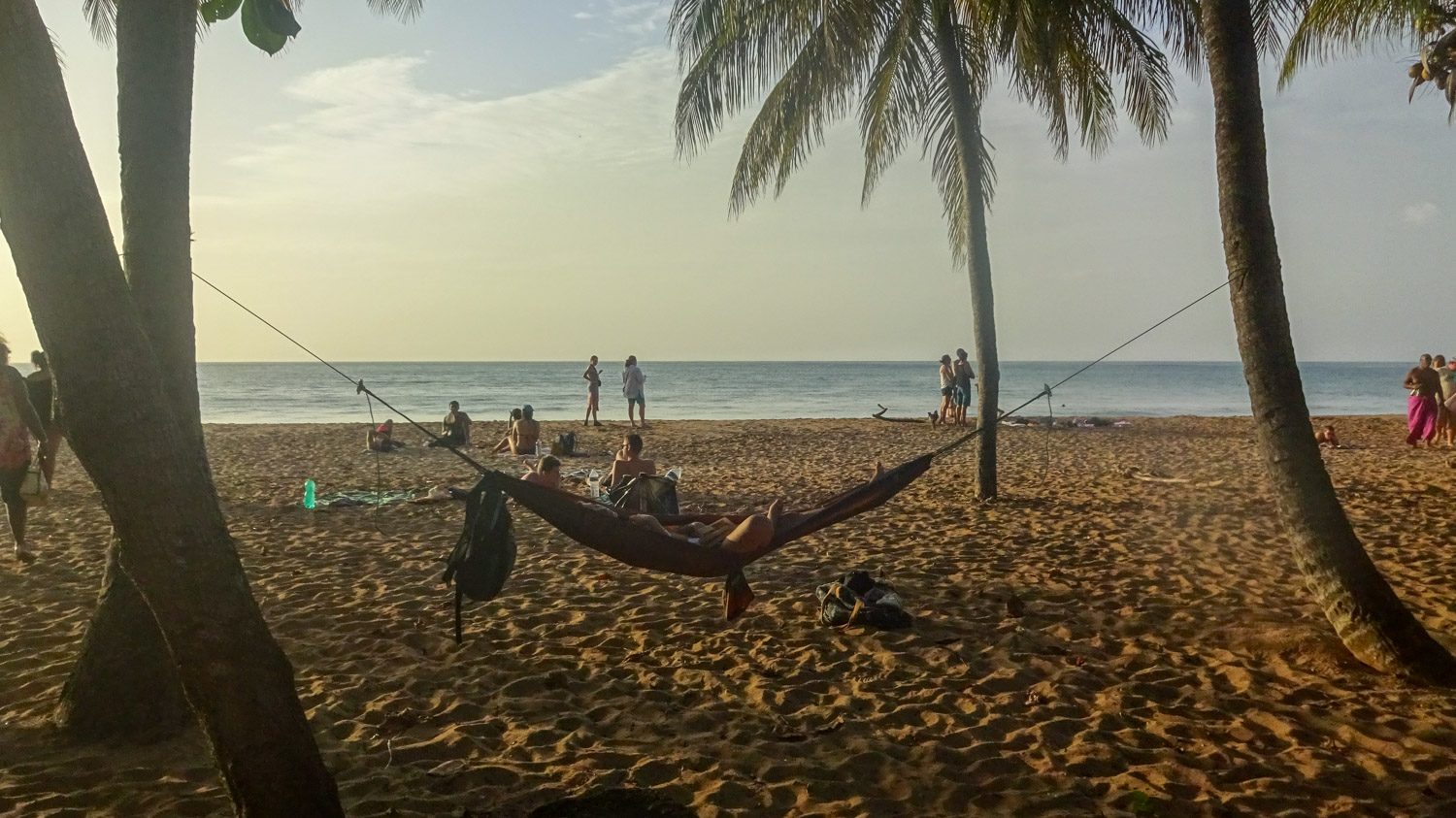 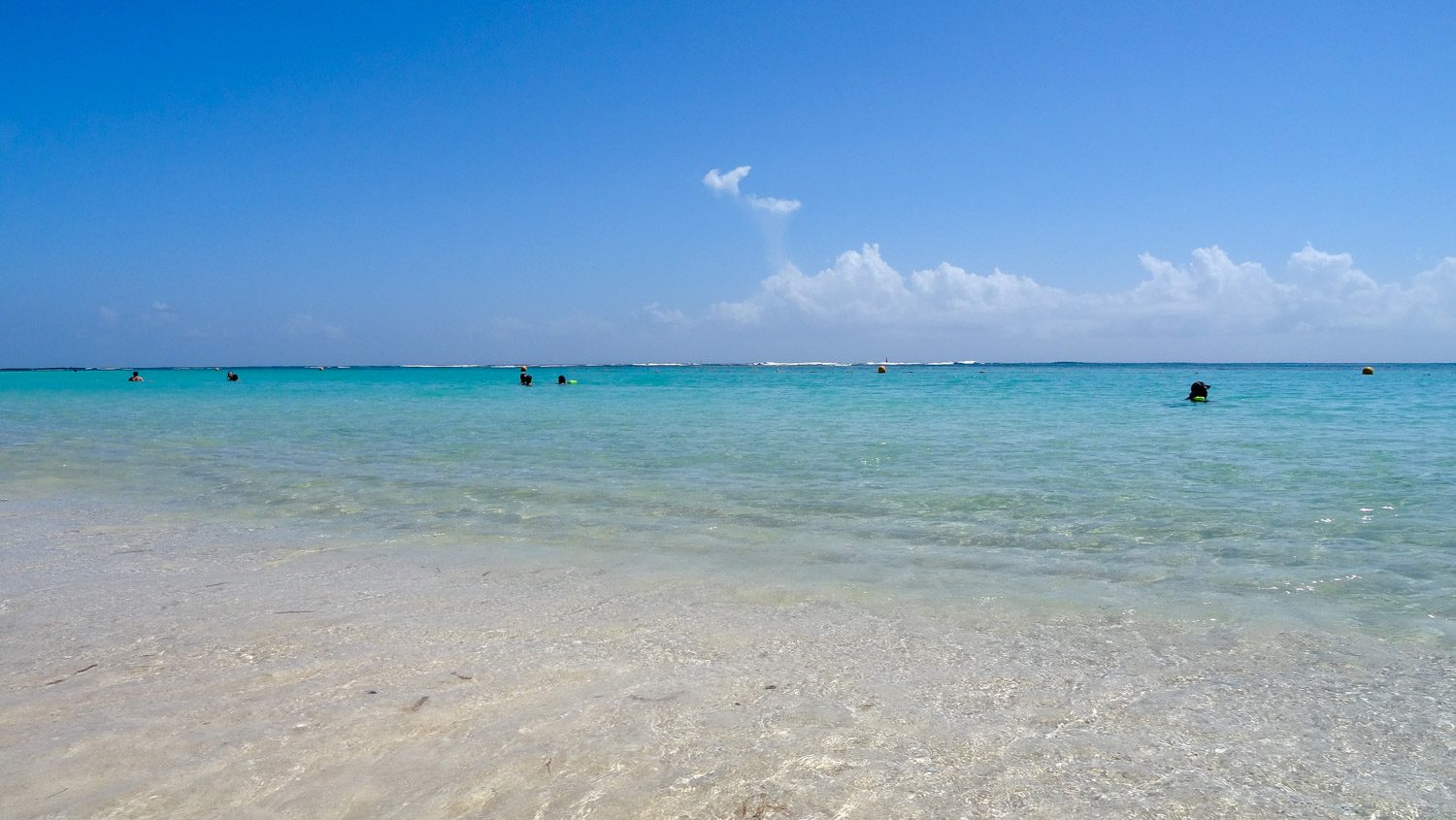 And in the southeast, there is this gorgeous water…

In the beautiful natural parks we met travelers, but very few. 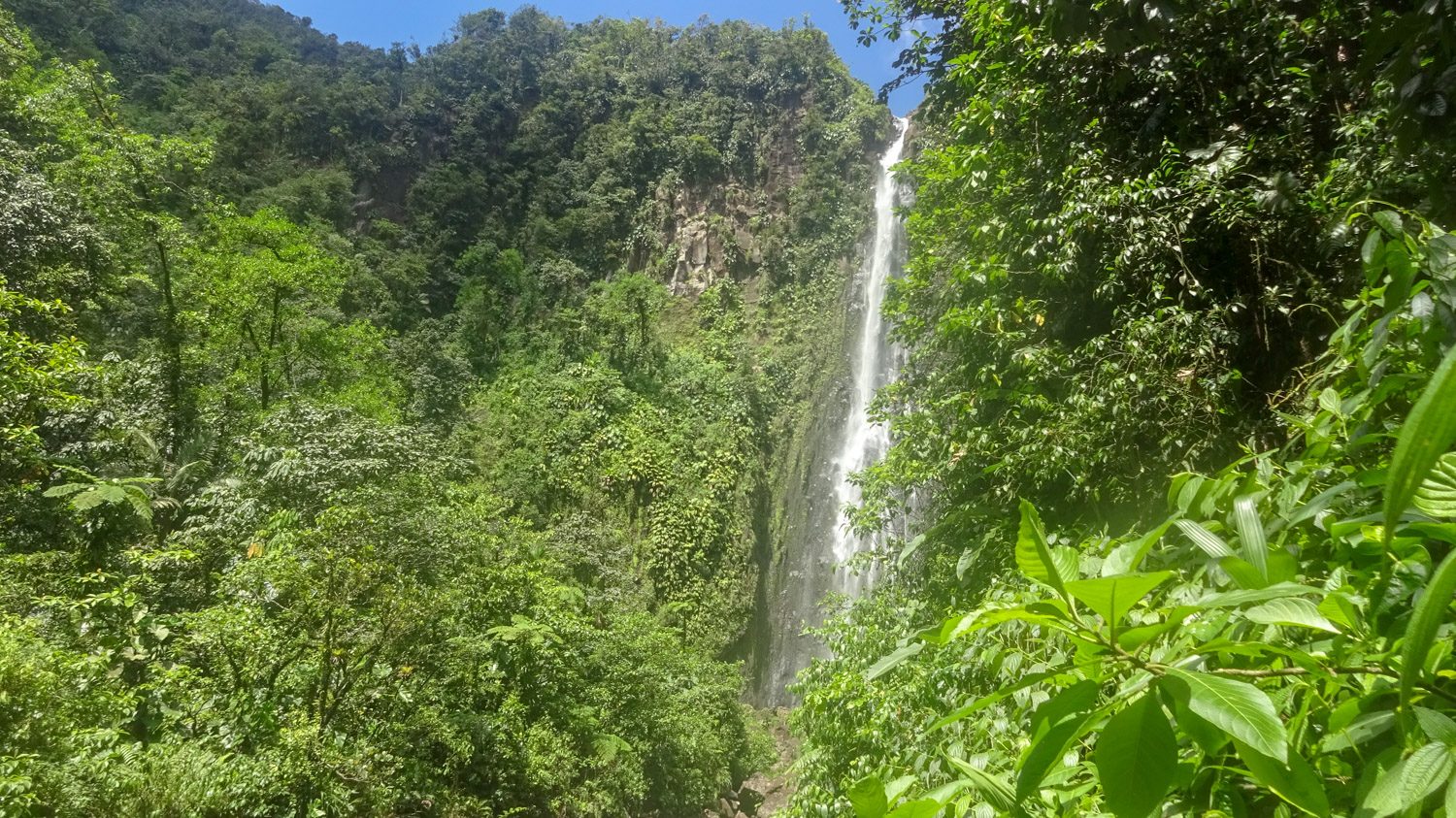 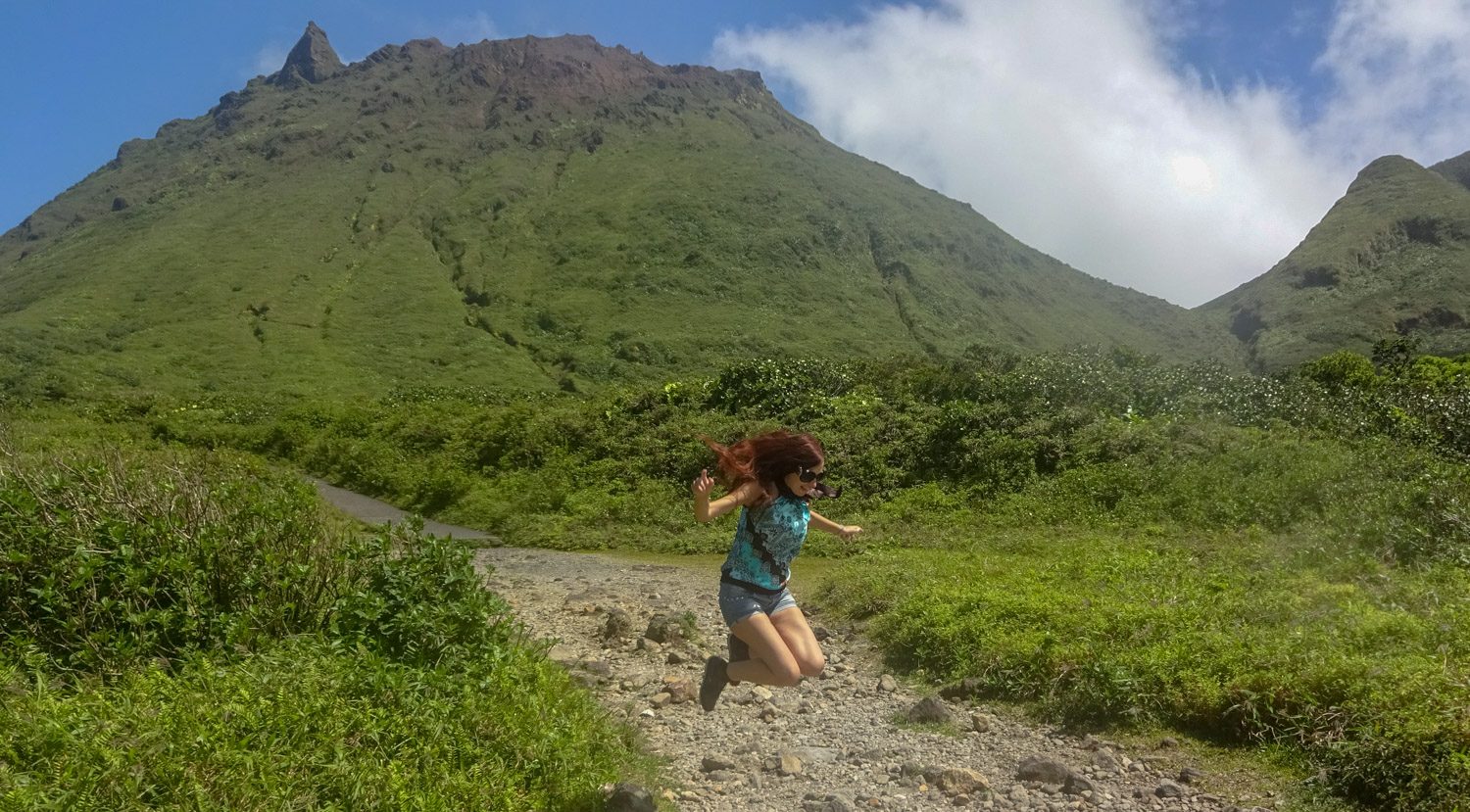 Walking on a volcano 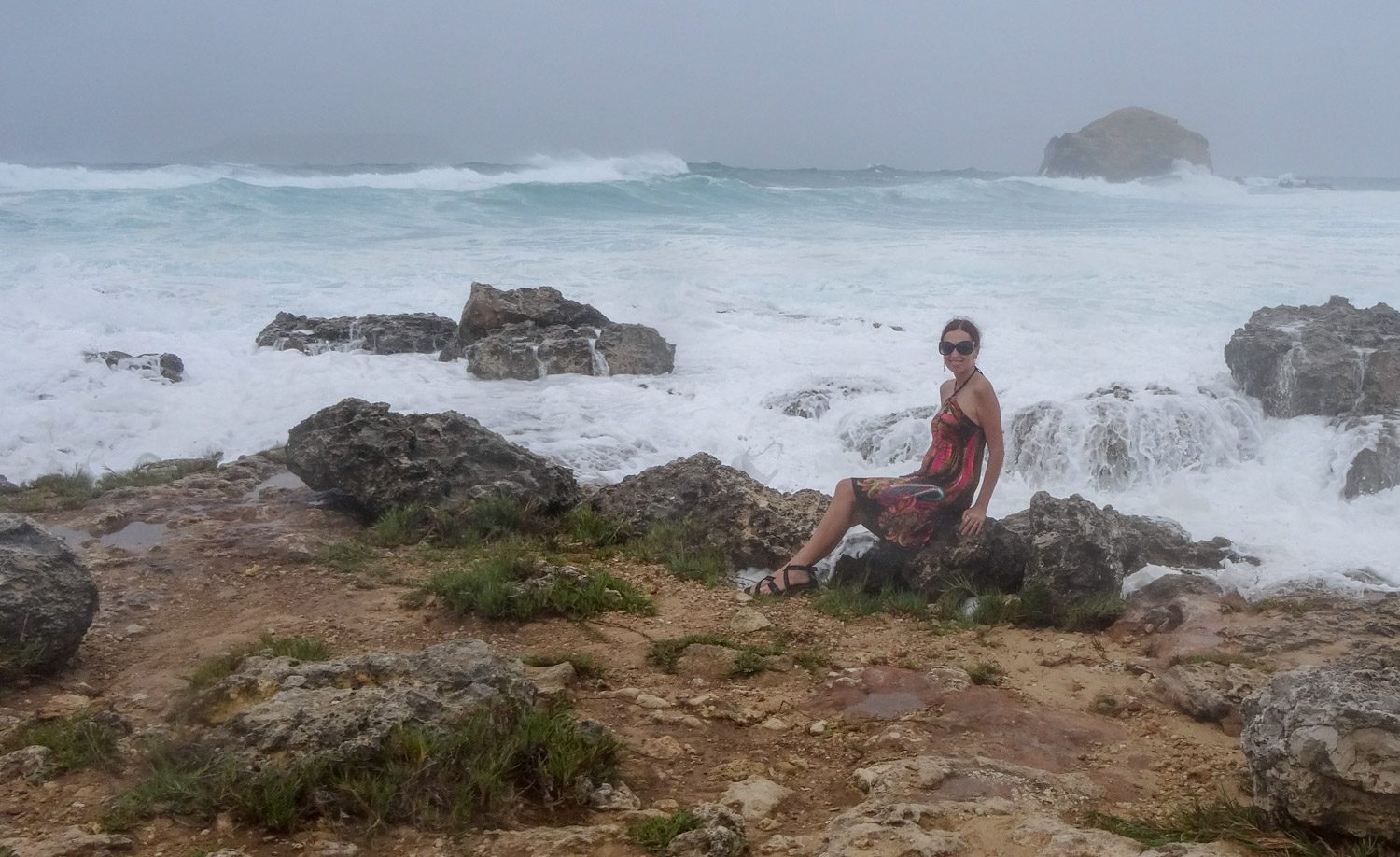 Of the unfamiliar wildlife, iguanas. Huge, slow and very bright. This is not strange: they masquerade as their surroundings, and the greenery here is amazing. It was a pleasure to watch them. Almost no nasty insects: you can sleep with the windows open, and walk through the rainforest without dousing yourself with repellent (I remember how I got bit by mosquitoes and midges in the beautiful Mexican Tulum, when I forgot the product against them). 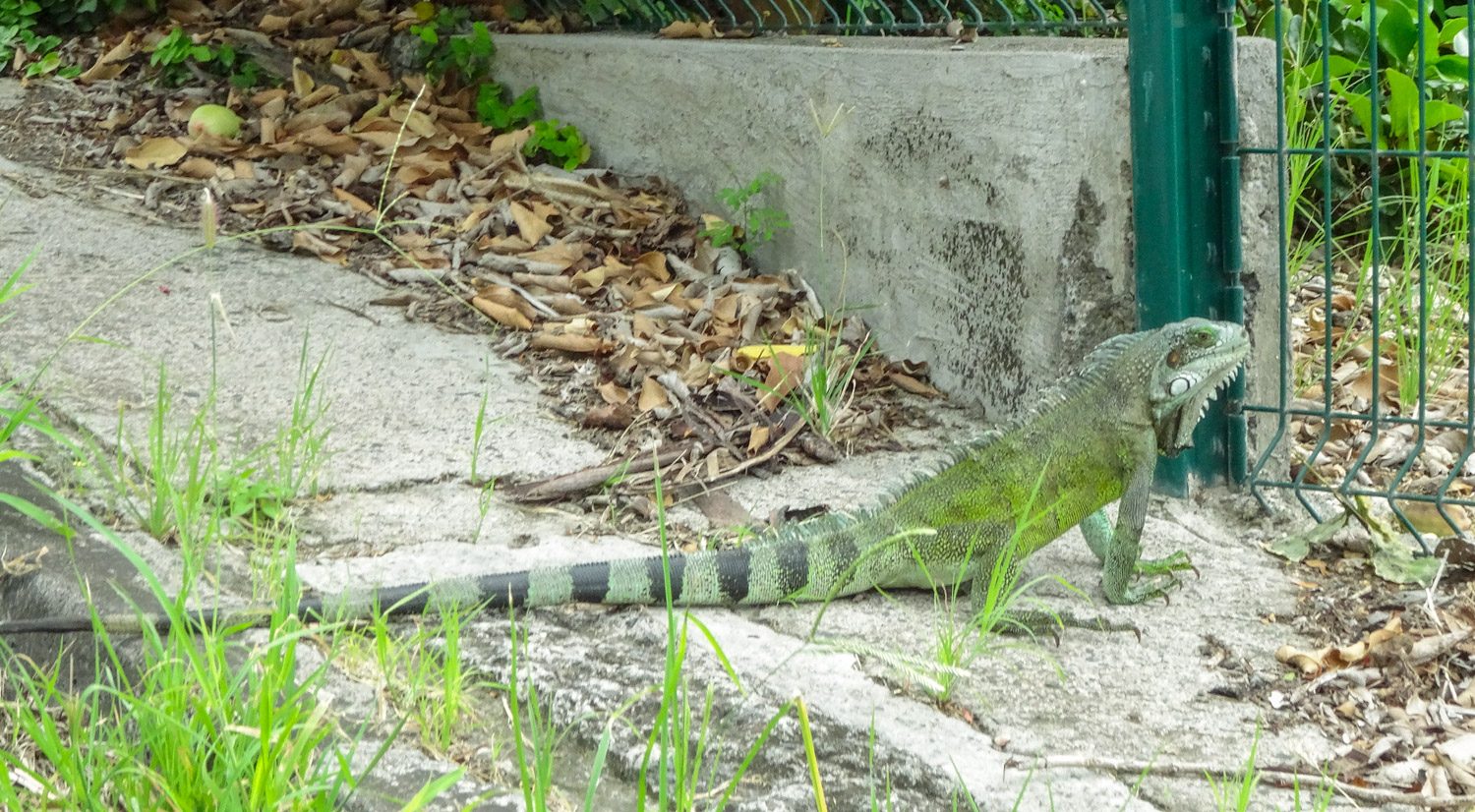 The most colorful iguana I’ve ever seen.

The people here are calm and smiling, but English is a problem, so if you like to communicate a lot, it’s better to count on French. Many live in individual houses, there are almost no high-rise buildings. Villas we somehow did not take a picture, but took this video.

But took a funny shot. 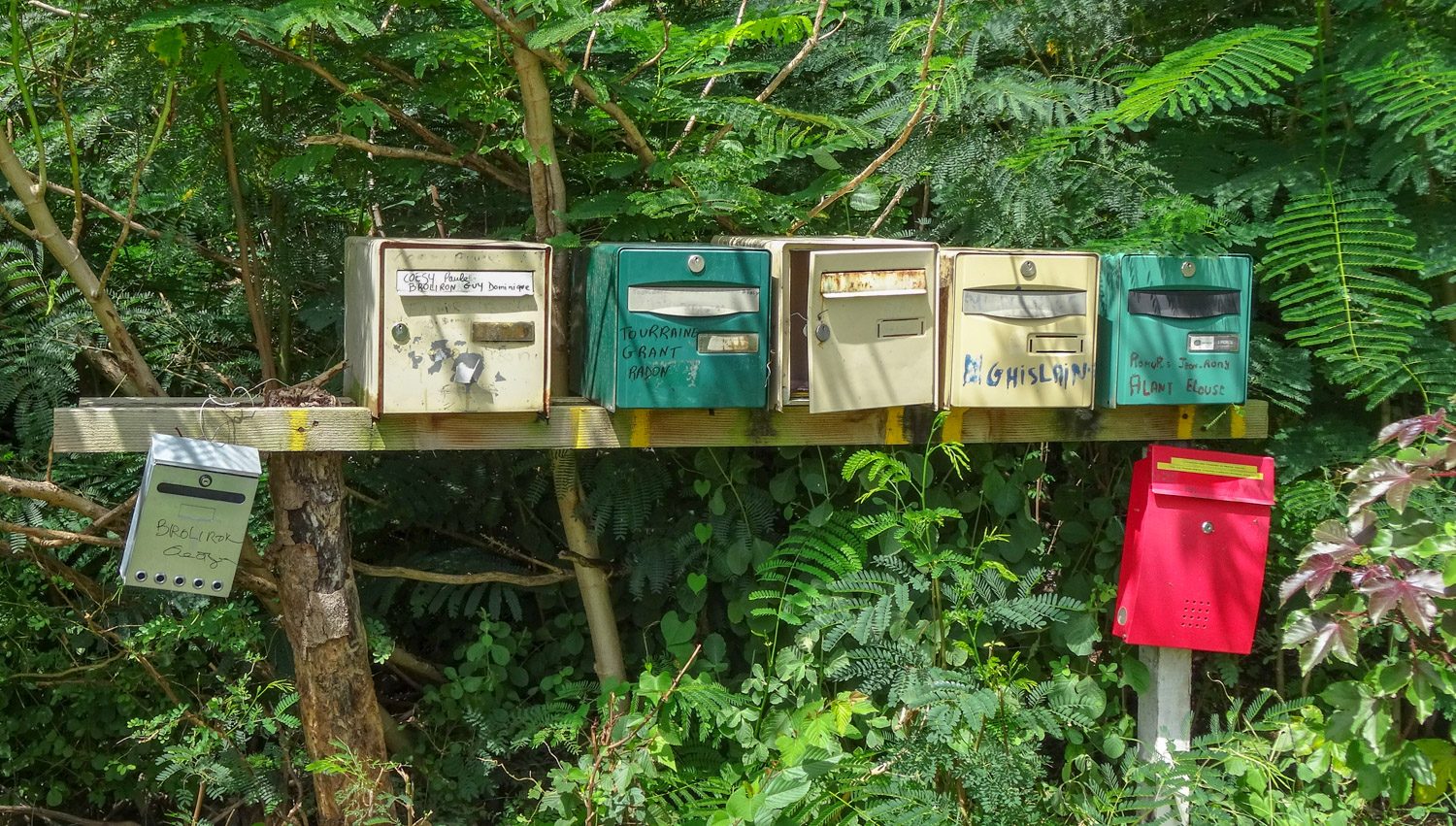 Mailboxes here are often in piles at the fork or a common road to several houses.

A lot of people ask about the prices: they are comparable to French prices. Something is cheaper, something is more expensive, in general the cost of goods is higher, but not significantly. There are the usual Carrefour, Leader Price, Super U… There are no toll roads – and that’s great! Parking at most attractions is also free.

It is customary here to keep clean: the beaches, parks, city fairly little garbage left behind by people (I do not mean seaweed thrown out by the waves). You can see that they try to decorate the city. Lots of bright colors, comfortable sidewalks, monuments, vegetation… 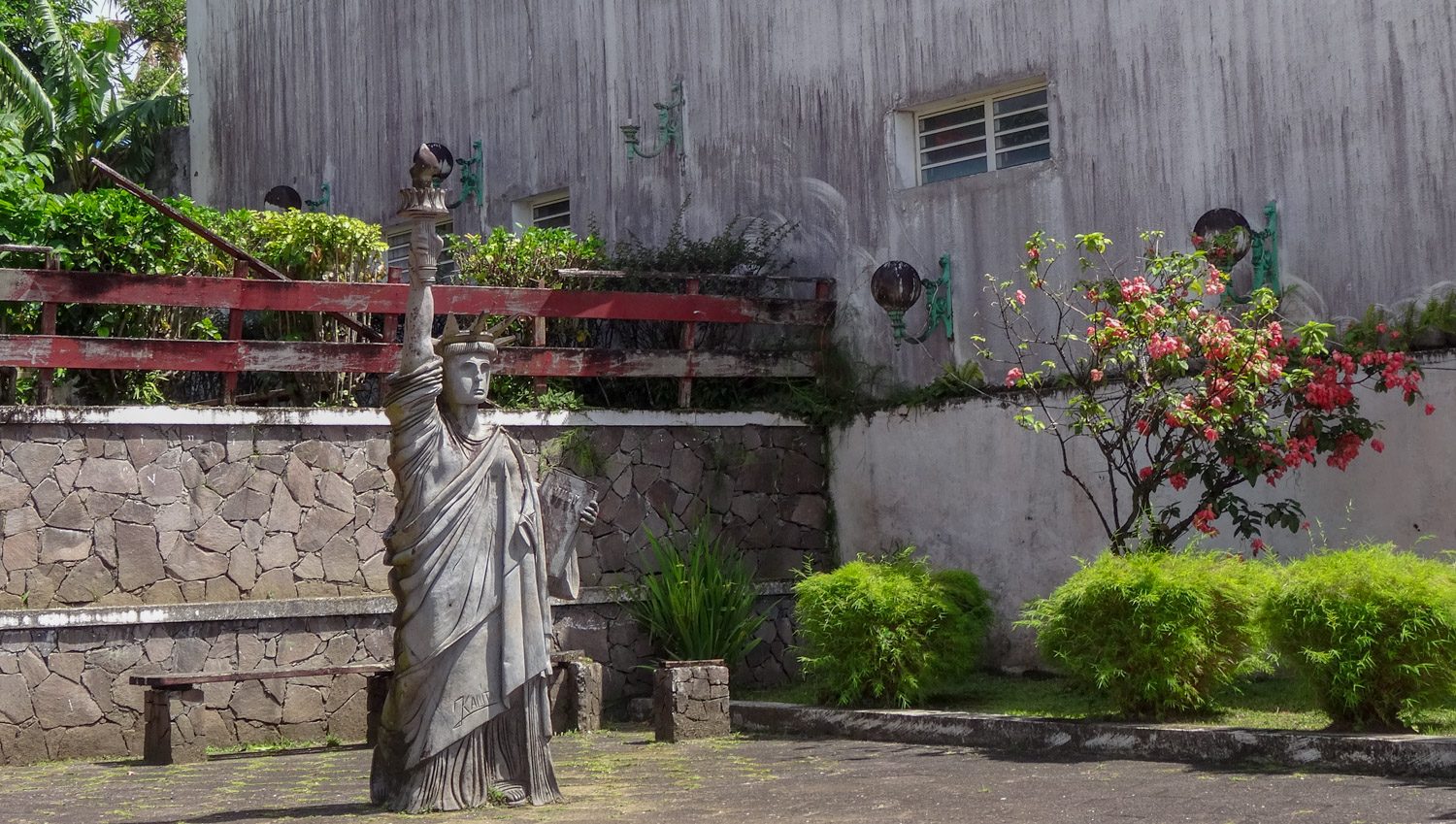 A Statue of Liberty of its own!

The feeling is that the island does not live richly, but it does not look neglected. It’s unassuming, cozy, and pretty, and we loved it! Want to know more? Read separate articles about the beauties of Guadeloupe.