Guimar Pyramids – the most mysterious park in Tenerife

The stepped pyramids of Guimar, located in the northeastern part of Tenerife, can be called without exaggeration the most controversial attraction of this island. The exact date of their foundation is still unknown. The method by which they were created also remains a mystery. Scholars are still arguing over whether the stone mounds are a sacred structure from the time of the Guanches or a more modern construction with no historical value. So what do these mounds hold, and why do more than 100,000 people visit them each year? 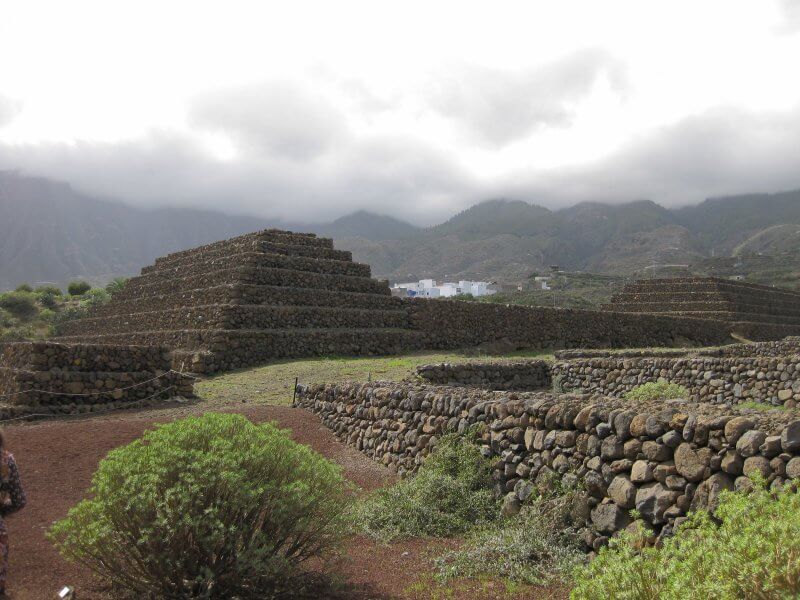 The Guimar Pyramids, named after the city of Guimar and located at the intersection of Onduras and Chacona Streets, are an unusual architectural complex, each structure with precise geometric forms. It is believed that there were originally at least 9 mounds in this part of the island, but only 6 have survived. They formed the basis of a large Ethnographic Park, created in 1998 by Thor Heyerdahl, the famous Norwegian archaeologist, writer and traveler.

The main feature of these mounds, which are up to 12 m high and vary in length from 15 to 80 faces, is their clearly defined astronomical orientation. On the summer solstice, for example, from a platform on top of the largest structure it is possible to observe the double setting of the sun, which first disappears behind the mountain peak and then reappears, only to disappear a few minutes later behind a second rock. As for the winter solstice, there is a special staircase on the west side of each pyramid that will lead you exactly to the rising sun. 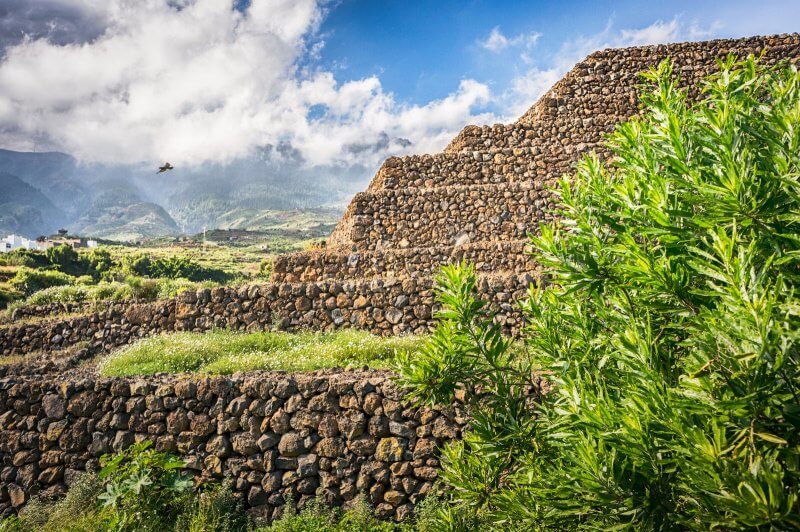 There is another curious fact associated with the history of this park. If you look at it from space, you can see that all the objects stand in a certain order, the appearance of which resembles a giant blueprint. What is interesting, most of the structures have reached our times in their original form. The only exception are pyramids №5 and 6, which at the end of the 90s of the last century were subjected to large-scale reconstruction. At about the same time archaeological excavations were carried out on the site, initiated by archaeologists from the University of La Laguna. In the course of these works some interesting artifacts dated back to 680-1020 A.D. were discovered (remains of domestic utensils, grapevine, pottery, human bones, etc.). None of these finds, however, allowed scientists to establish at least an approximate time of the appearance of these mounds. 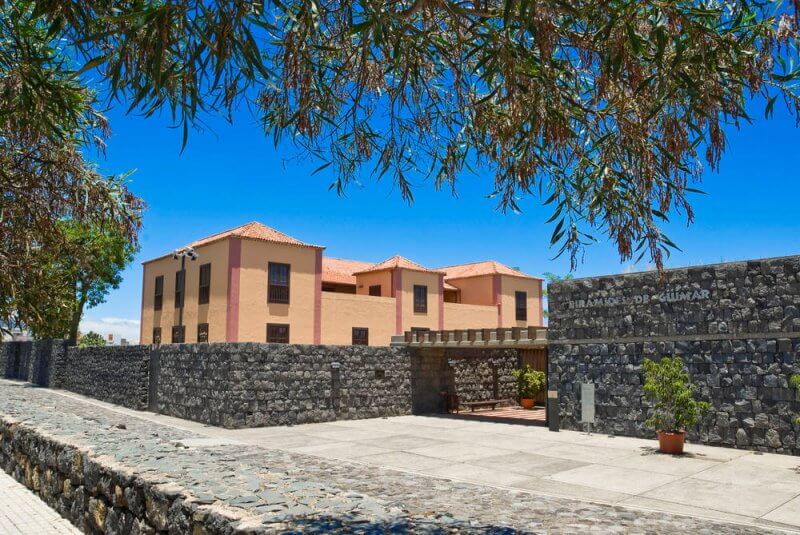 Be that as it may, but today the Ethnographic Park “Piramides de Güimar”, the area of which exceeds 60 thousand square meters, is one of the most visited attractions of the island of Tenerife. In 2017, it was awarded the title of Botanical Garden and became one of the 5 official arboretums belonging to the Canary archipelago. Today, there are several hiking trails related to the nature, culture and history of Tenerife.

In spite of numerous studies carried out by the world’s best specialists, the exact origin of the pyramids of Guimar (Tenerife) remains unknown. Moreover, scientists put forward several hypotheses which are in no way connected with each other. Let’s consider only the basic ones.

Thor Heyerdahl, who devoted a year of his life to the study of this phenomenon, claims that one of the main attractions of the island of Tenerife refers to the most important achievements of the ancient civilization that existed on the Atlantic coast hundreds of years ago. His words were confirmed by the obvious similarity of the mounds of Guimar with the architectural structures erected in the Old and New World. The famous traveler was able not only to find clear traces of machining on the cornerstones, but also found that the main building material for these structures was none other than solidified volcanic lava. In addition, Heyerdahl was able to find out that the local caves were inhabited by the tribes of the Guanches, the Canarian aborigines. Perhaps they were the authors of this construction. 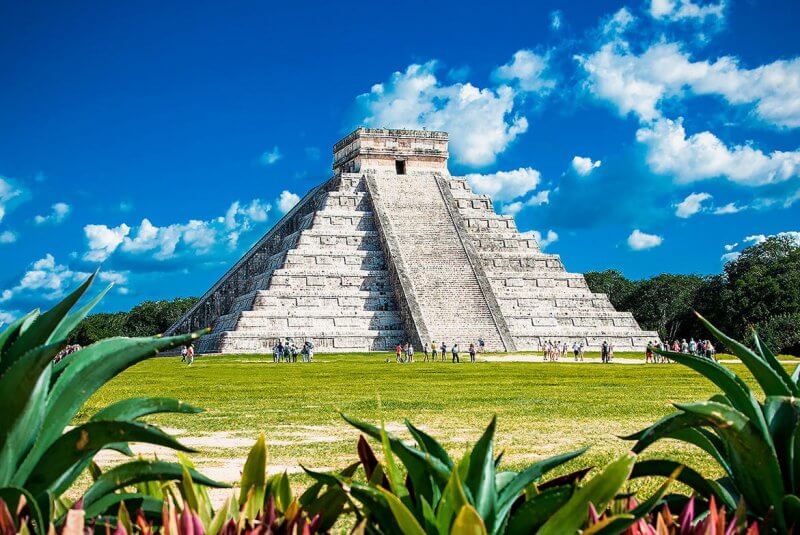 Pyramid of Chichen Itza in Mexico

Another popular theory linking the appearance of the Piramides de Güimar with the name of Antonio Diaz-Flores, a rich landowner who lived in this part of the island in the middle of the 19th century. The fact is that the deeds of 1854 relating to the purchase of the property do not mention the mounds, whereas the will made by Díaz-Flores (18 years later) mentions them more than once.

According to this theory, the Guimar pyramids of the Canary Islands were created in the second half of the 19th century when the farmers, preparing the land for sowing, stacked the stones found in the fields on top of each other. However, ancient images found during archaeological excavations show that similar structures could be seen not only here, but also in other corners of Tenerife. And even in those where no traces of human activity were found. Locals say that over time, most of them were dismantled and used as cheap building material. 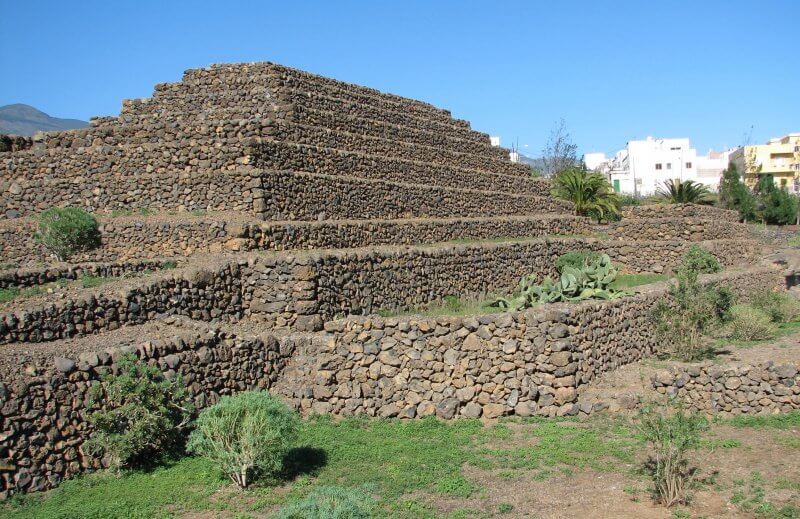 What can I see in the park?

In addition to the mounds themselves, there are several other interesting places on the territory of the complex:

The Pyramids of Guimar (Tenerife) are open daily from 09:30 to 18:00. The cost of a visit depends on the type of ticket and the age of the visitor:

The ticket is valid for 6 months from the date of purchase, but cannot be refunded. For more information, visit the official site of the complex – http://www.piramidesdeguimar.es/ru. 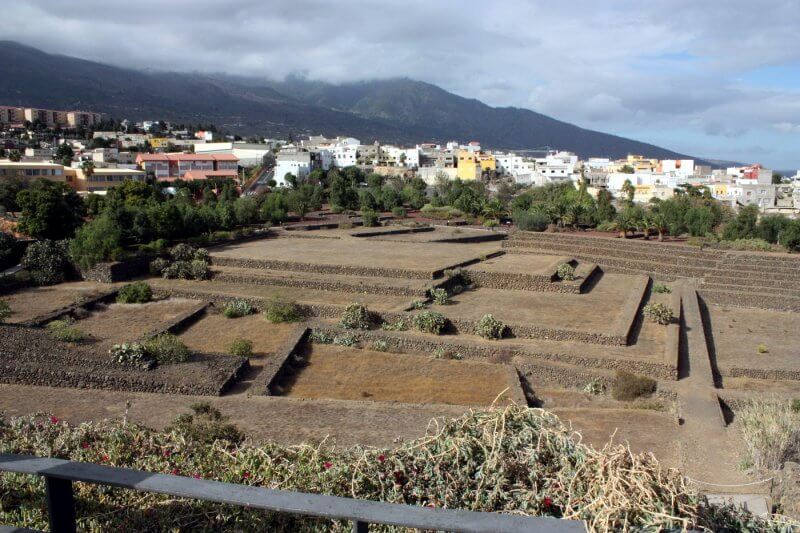 Going to see the Guimar pyramids, listen to the recommendations of tourists who have already been there: 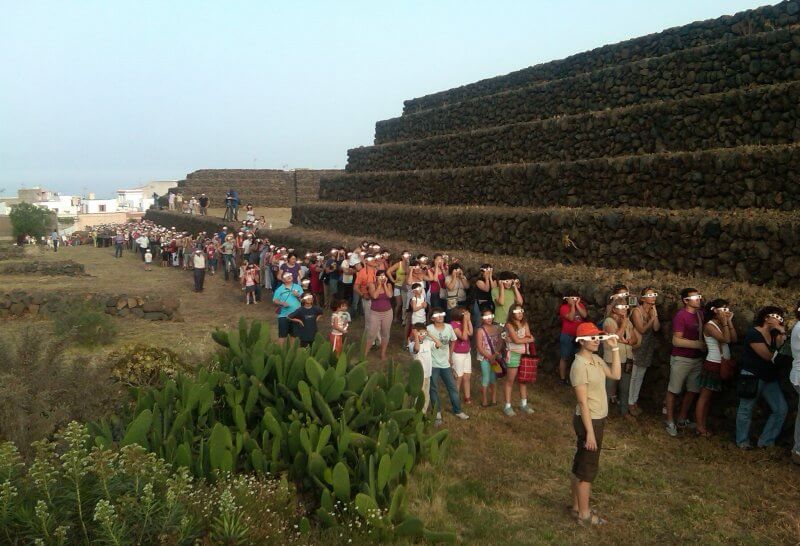 See the museum exhibition and the pyramids:

Updated: 2 Jan, 2020 If you want to spend your next vacation in Tenerife,…

Updated: 21 Dec, 2019 Volcano Teide on the Spanish island of Tenerife is one of the…

Guimar Pyramids on the island of Tenerife. Canary Islands

The Guimar Pyramids are one of the controversial, not fully explored and ancient landmarks of the island of Tenerife, the largest of the Canary Islands. This place attracts more than 100,000 travelers every year, and for good reason. It is an amazing, from a historical and archaeological point of view, a set of geometrically regular pyramids. 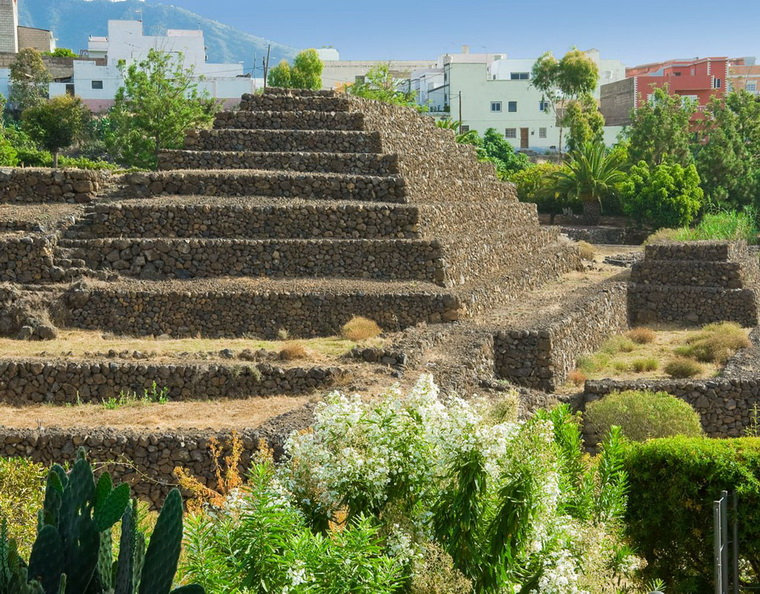 At the moment there are 6 pyramids in the complex. But there is information that originally there were 9 of them. The length of the sides of the pyramids varies from 15 to 80 meters. The height reaches 12 meters. It is remarkable that if to look at them from space, the general structure of unknown origin is clearly visible. That is the pyramids stand not isolated, but as if inscribed in a certain giant drawing. Here, below you can see how the Pyramids of Guimar look like from above. 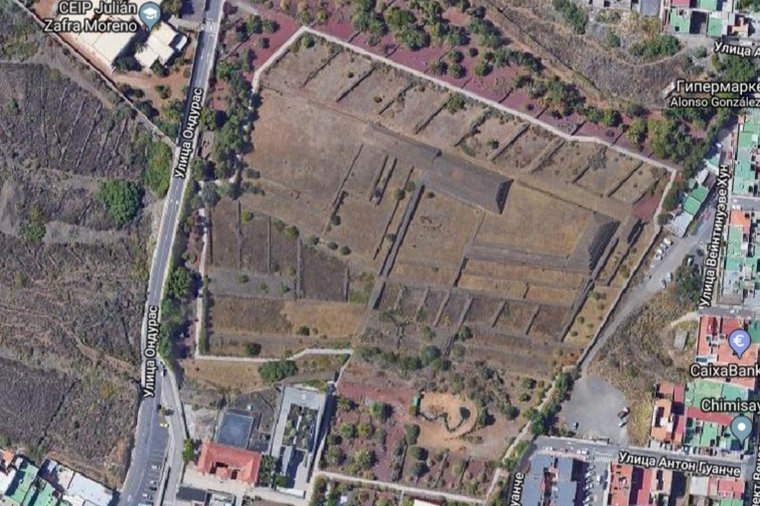 As you can see, clearly traced unknown structure, which to this day gives no peace to scientists.

Versions of the Guimar Pyramids origin

The study of this phenomenon began relatively recently, only in the early 1990s. Until the end of the 20th century, it was believed that such pyramids in Tenerife were stacked by farmers to clear the fields of stones. This practice was used here in the 19th century.

Part of the confirmation of this theory is the following fact. In the middle of the 19th century the land on which the Guimar Pyramids were built was purchased by Antonio Diaz-Flores. So, in the purchase documents from 1854 there were no pyramids, but in the will from 1872 these buildings are already mentioned. There is no more exact information on when and why they were built.

In refutation of this version it is possible to result a number of factors. It is not clear why it was necessary to stack stones in such correct structures. Besides, researches have shown that the bases under pyramids are leveled.

Records of 1632 in which the monk-letters described creation of similar pyramids on Tenerife were preserved. He wrote that aborigines erected constructions in the form of pyramids from stones. And they did not fasten them in any way. Around them arranged competitions and dances, as well as rituals.

During the excavations in the area artifacts dating back to the 2nd half of the 1st millennium A.D. were found. A significant contribution to the study of the Guimar Pyramids was made by the famous Norwegian explorer Thor Heyerdahl. He first learned about the complex in 1991. He established that the stones of the pyramids had been machined and the surface beneath the pyramids had been artificially leveled. The pyramids appeared to be made of chunks of solidified lava rather than the usual boulders collected from the fields.

Heyerdahl suggested that the structures were properly oriented in space. All the pyramids on the western slopes have stairs pointing toward the sunrise on the winter solstice.

Double sunset in the Guimar pyramids

On June 21 (the day of the summer solstice), a “double sunset” of the sun is observed from the main axis of the complex. On this day, the luminary descends behind the mountain, then partially appears and already completely disappears. The most beautiful view of this phenomenon opens from the top of a large pyramid. 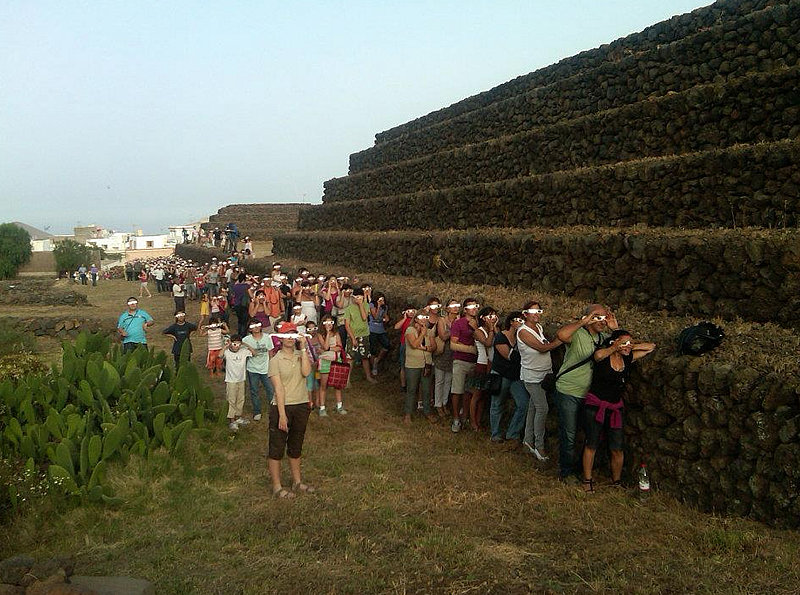 This is how tourists line up to see the double sunset.

Although in our subjective opinion, this is just a peculiarity of the terrain. Here is a video in which you can see that “double sunset”.

Since 1998 the pyramids have been part of an ethnological park of more than 64,000 m 2 . The initiator of its creation was Thor Heyerdahl. In addition to the pyramids, there are pavilions dedicated to Thor’s expeditions and theories of the pyramids’ origin.

Since 2017, the Pyramids of Guimar have also been called a botanical garden. The park has created several trails related to the culture, history and nature of the Canary Islands, where a special role is played by the botanical collection, which forms an integral part of the expositions, presented in an area of more than 20,000 m 2 . In addition to the traditional plants of the region, there is the Poison Garden. In it, more than 70 varieties of poisonous plants from all over the world are collected on an area of 1,500 m 2 . 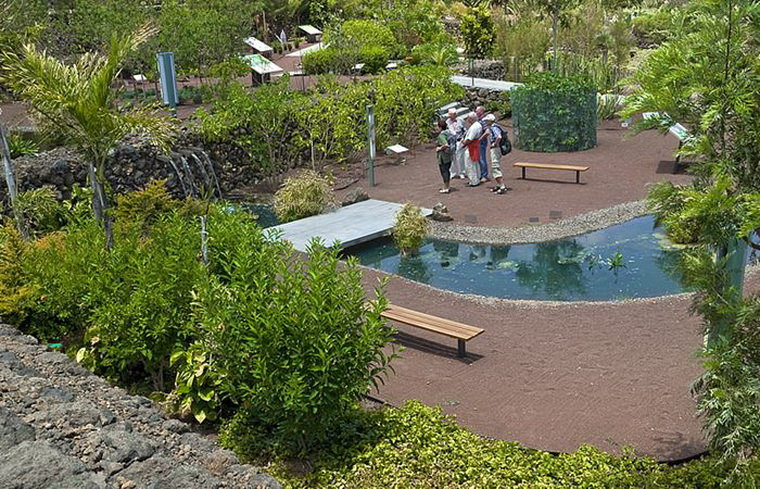 Routes in the Guimard Pyramid Park

How to get there and how much it costs

There is a fee to visit the Guimar Pyramids and it depends on the number of sites you plan to visit. Prices start at 11.9 euros for an adult and 5.5 euros for a child. Children under the age of 9 go free.