In the northern part of Australia, there is a huge, more than 600 kilometers long and wide sea bay. It is the Bay of Carpentaria, named after Peter de Carpentier, the governor-general of the Dutch East Indies. The bay is famous for its unique natural phenomenon called “Morning Glory” clouds.

This is a rare meteorological natural phenomenon that appears in the southern part of the Gulf of Carpentaria in northern Australia.

Morning Glory” clouds are giant twisted cloud rolls 1-2 kilometers wide and about 100 kilometers long (sometimes the length of such air waves reaches 1000 . kilometers). Usually they pass at a height of about 1 kilometer from the surface and can move at a speed of up to 60 kilometers per hour. There were recorded cases when unusual clouds passed at a height of only 100-200 meters. 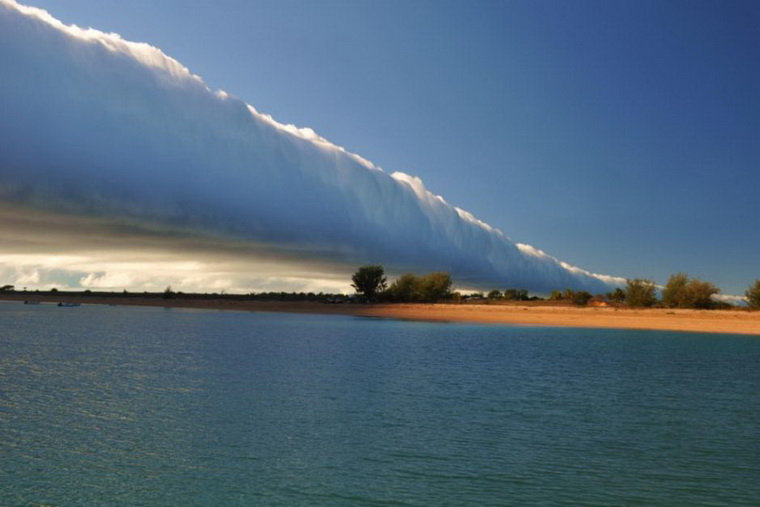 Morning Gloria clouds are usually accompanied by a sharp gusty wind, a rapid increase in the vertical displacement of air currents and a jump in atmospheric pressure at the surface.

A strong vertical motion is present at the front of the cloud, carrying the air up through the cloud and creating a rolling appearance, while the air in the middle and back of the cloud becomes turbulent and decreases.

This creates the appearance of the cloud actually curling into a long roll. And the cloud visually rolls against the direction of its motion. 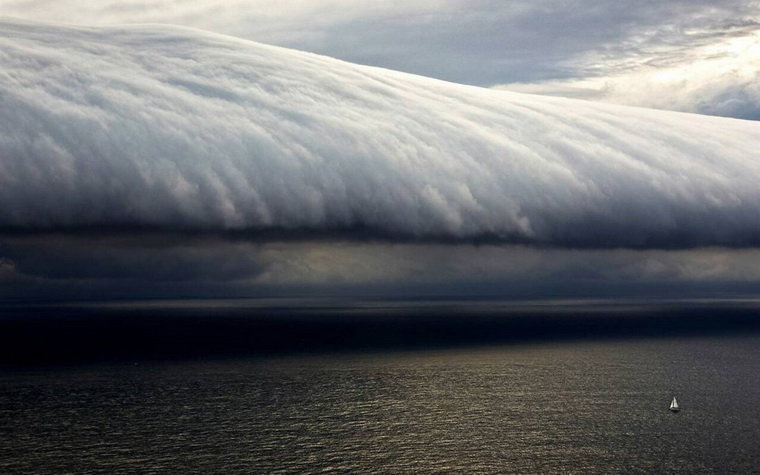 Clouds form directly over the Gulf of Carpentaria, pass to the coast and quickly disperse over land, where the air is drier. Sometimes the appearance of clouds is accompanied by rain and thunderstorms.

Unusual cloud formations have been seen here since ancient times. The locals, the natives of Garrava, called this phenomenon kangolgi. It was believed that the appearance of clouds is a good sign.

Europeans first learned about this phenomenon from Australian Air Force pilots who reported these clouds in 1942. 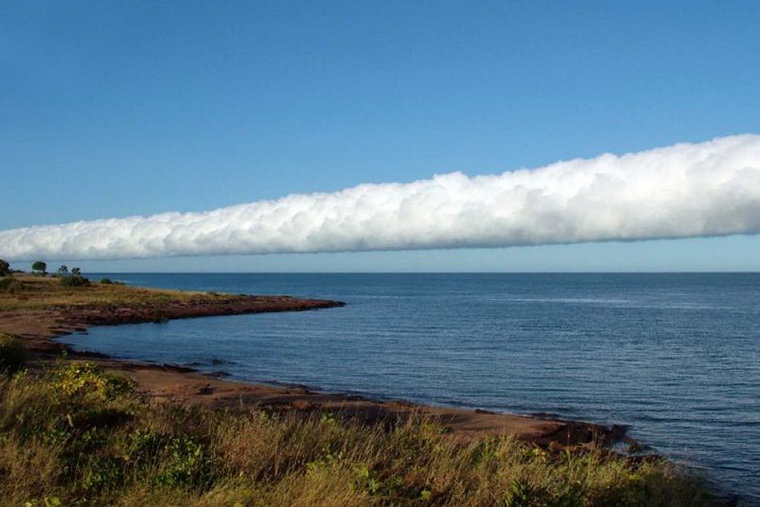 Theories of the Morning Glory clouds

Despite careful study, the causes of the phenomenon have not yet been solved. Through research, one of the main reasons for the Morning Glory phenomenon is the large-scale circulation of air masses, darkly associated with the breezes that develop on the coast and in the bay.

The Gulf of Carpentaria clouds have been studied by many scientists since the 1970s. The first results were published by Reg H. Clark of the University of Melbourne.

Since then, many studies have been conducted that offer different models to explain the region’s unique air mass movements. 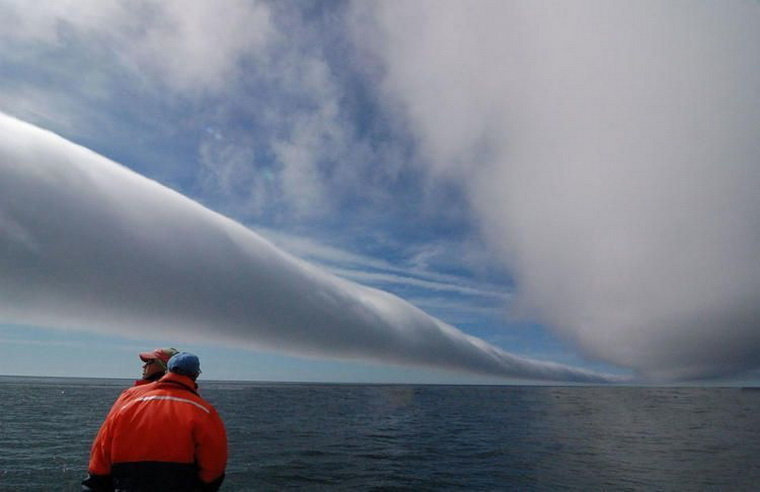 To the east of the Gulf of Carpentaria is the wedge-shaped Cape York. Offshore winds blow on either side of it and create two independent breezes that collide over the middle of the peninsula and rise. This destabilizes the air masses – moisture condenses and forms a roll-like cloud. At night, the air cools and descends over the peninsula.

Meanwhile, the air masses over the Gulf of Carpentaria return – the air becomes cooler and higher at water level (in meteorology this is called a reverse layer – warm air below and cold air above). The cooler air from Cape York Peninsula descends to the Gulf of Carpentaria. Here it meets the reverse layer of the bay and descends beneath it. This confluence and movement of air masses is what forms the Morning Glory clouds. 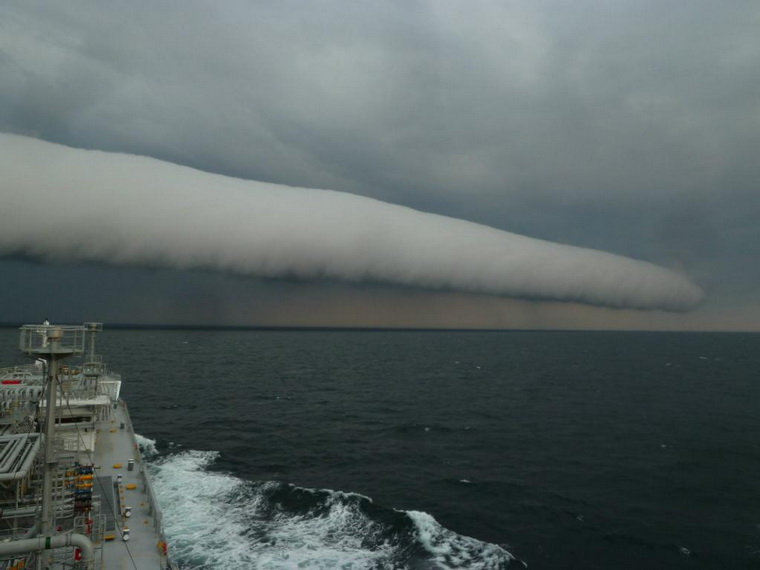 The sea breeze from the east is powerful and warm, and even warmer from the west. It passes over the cooler air masses of the eastern breeze, resulting, under certain conditions, in these roll clouds.

There is still much in nature that is unexplained, but incredibly beautiful and appealing. Note Lake Maracaibo and Lightning Catatumbo in Venezuela 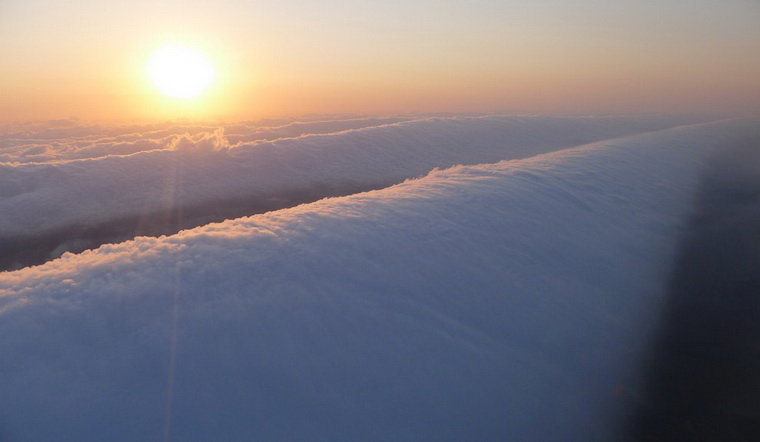 Clouds of the Gulf of Carpentaria in tourism

Morning Gloria is best viewed from the town of Burketown, located at the southern end of the Gulf of Carpentaria. Clouds can appear at any time of year, but they are most common between late September and early November. At that time, clouds appear about twice every 5 days. Sometimes one cloud comes, and sometimes 7-8 or more.

Clouds appear early in the morning (that’s why they are called “Morning Glory”) on days when humidity is high and strong sea breezes blew the previous day. The directions and behavior of rolling clouds are irregular – each morning they will look different. Generally, the clouds come from the northeast. 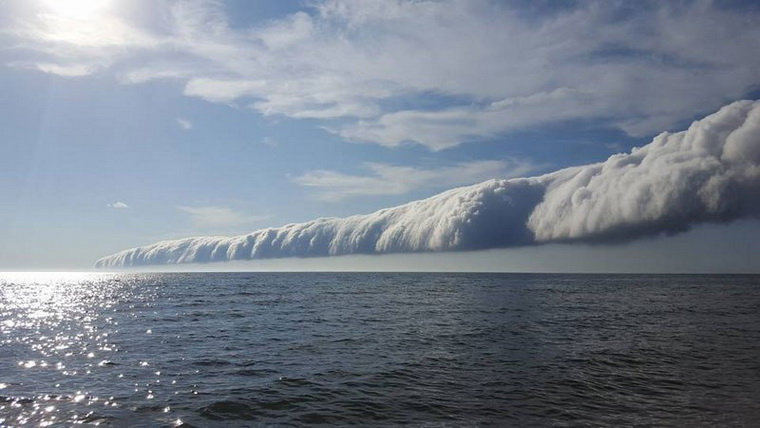 As we mentioned earlier, clouds usually disperse over the surface of the earth. Therefore, it is best to view them in their full glory from an airplane. An airfield with airplanes and attentive staff is provided for tourists. But it is worth remembering that such unusual clouds are very dangerous for aircraft because of the strong turbulent air currents.

Often the bay is visited by extremists who try to conquer the cloudy waves on hang-gliders.

Burketown Pub as a cloud indicator

The town has a pub with the same name (Burketown pub). It unofficially serves as a local weather forecasting system. Visitors, when they come here, not only relax, but also observe the behavior of the corners of the tables. When they start to lift up and twist, it means that amazing clouds are about to appear.

READ
Babinda Boulders - the memory of the beautiful Oolan. Australia

And if you are interested in classic sea waves, find out where the biggest waves in the world appear

A weather miracle: the Morning Glory cloud at Ladoga

Peter is a city of the sea. There is plenty of water around to swim in. But kayaking people choose, of course, Ladoga. Over the years that we spent rocking on the choppy Ladoga waves, we encountered many interesting things on our way. One case is particularly memorable, not only because it was the first time we encountered such a mess, but also because it was probably the most unusual natural phenomenon that frightened and surprised us.

That time our way lay from Tervu, through Lahdenpohja and further to Sortavala. The sun, the sky opened wide and the hot wind – it was a hot weather for the last few days, and the group did not look very sporty: swimsuits, swimming trunks and no life jackets.

As we emerged from behind another island we saw a rough, shimmering open sea. Perhaps it was a little too much for kayaks, but we were not going to go far from the shore, and the instructor was unperturbed. In a far away misty haze the cape on the island of Putsaari was waiting for us.

The horizon was clear and poorly distinguishable, water and sky almost merged. But far behind, somewhere over the Priozersky shore, blackness was building up. Straight ahead, over the distant islands, it was dark too. The wind, as always, was headwind and one had to hurry in order not to be flooded by every wave.

Suddenly something subtly changed. The horizon darkened, connecting the two clouds with a thin black cord. But the sun was still shining above us, and the people were having fun, with no thought of any danger. As I tried to keep up, I looked up at the sky and saw that this string was getting thicker and thicker. Our cape was still far away, and this long, narrow cloud had broken away from the horizon and was drawing nearer before my eyes. Its color was like that of a normal thundercloud, but the lighter fibers in it showed a spinning motion. It was not looming, but rolling toward us.

READ
Lake Hillier is a salty pink lake in Australia

Suddenly the wind dropped completely . There was a passage between the islands to the left, and it seemed obvious that we should hide. But our bosses decided otherwise, and we moved on. A few minutes more and the cloud was over us. It felt as if you were under a bridge: silence and darkness. It was going very low, it had never been felt so clearly. And then the wind blew. 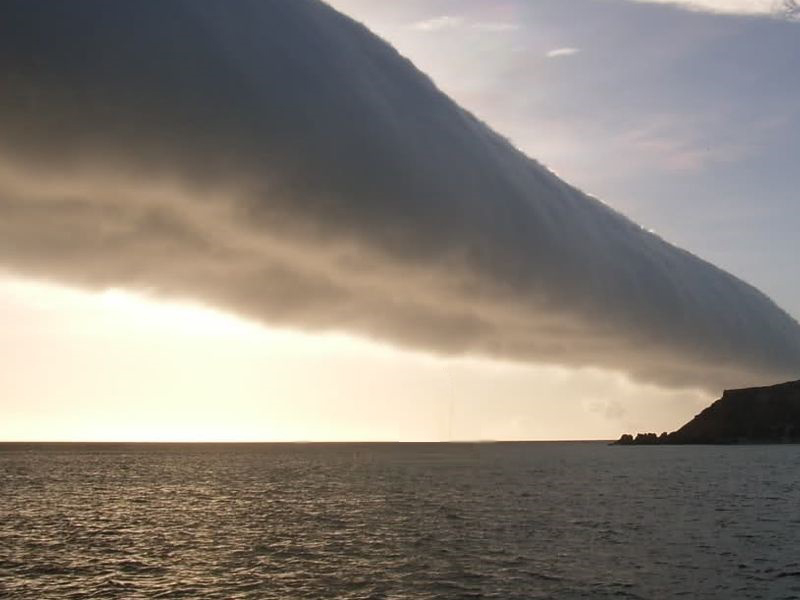 The Ladoga was sweeping. Waves were growing before my eyes. The wind was so strong that it was almost impossible to move the blade forward.

It became clear that we would not make it through. We had to turn around and try to get to shore. But try to turn on such a wave! Any mistake and you’re in the water.

We were able to turn around. We were helped by our rudders without which I could never get into my kayak now.

The cloud had passed by long ago, as before, the sun was shining, the waves were travelling and carried us along the steep rocky shore. But their height was such, that when they lifted the boat, it was impossible for the first number to reach the water with the oar. The bank was going down and soon we saw a pile of boulders, on which we literally threw ourselves, surprisingly not having broken the kayak.

The story is, of course, memorable for us. But it was not until several years later, when I saw the picture on the Internet, that I learned what we had witnessed, even though we could have been victims of the phenomenon.

Only off Australia’s distant shores, in the Gulf of Carpentaria, can we hope to see these amazing, little explored clouds. Morning Glory. Only these clouds have dignified the name of their own, apparently because of their rarity, their unusual appearance, and the complex of meteorological phenomena associated with them. Both the calm wind before our cloud, and the squall that came over us later, and the unusual length (which can reach thousands of kilometers), and the great speed of movement (up to 60 km / h) – all this suggests that we have met with this particular miracle on the Ladoga expanses.

Our legs and hands were shaking, and at the same time we were overwhelmed with the joy of life. Even deeply non-drinking people were with the group that evening. Amazing bay, which we found behind saving boulders, became one of our favorite stops and was called “water park” because of the huge stones, the muddy sides of which was so nice to roll into the water. 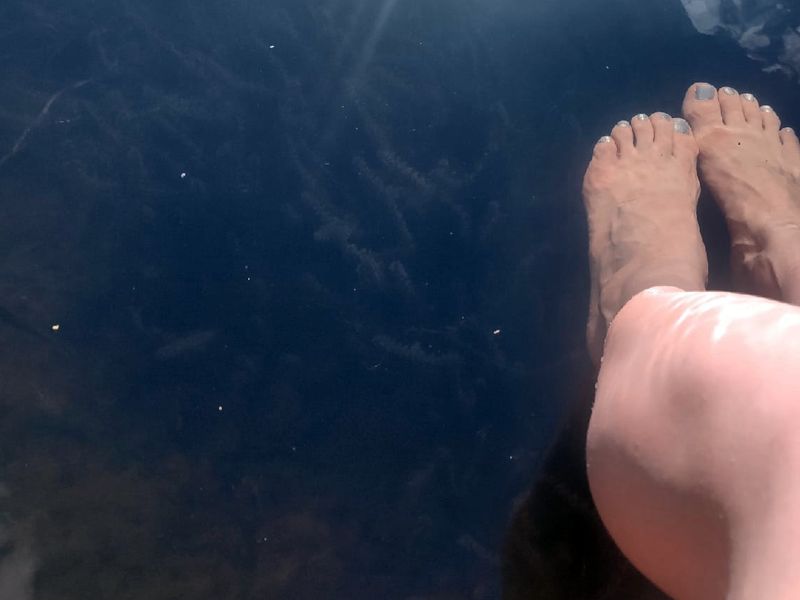 The next day the wind did not think to abate and we refused to swim anywhere. Sunbathing on the hot rocks, we watched the groups of kayaks as they made their way between the waves with white lambs. It was going great. We didn’t have to go there. We could paddle inside.

A lot of time had passed since then. We’ve gotten older, and hopefully a little smarter. More than once more we have come and will come to these parts and, donning life jackets, we will cling with awe and reverence to the living water of this formidable and beautiful lake.