Gudolfoss – the Golden Falls of Iceland

A small northern country of Iceland – a treasure trove of attractions. Glaciers here are next to geothermal springs, mountains with lakes and the ocean. An amazing country with amazing sights. One of them is Gudlfoss waterfall, located in the southwestern part of the country.

Gudlfoss Waterfall on a map

The waterfall is located on the river Hvita, which in turn is fed by the waters of the Hvitaurvatn and Sandvatn mountain glacial lakes.

Why is the waterfall called the golden waterfall?

There is some confusion with the name of the waterfall. It is called Gullfoss and is translated as Gullfoss, Gullfoss or Gullfoss. But considering the peculiarities of the Scandinavian Viking language, it is also known as Gudlfoss and means “golden waterfall” (Gull means gold and Foss means waterfall).

Reliably no one knows where this name came from. Maybe it has to do with the fact that Gudlfoss water has a golden hue in the sunlight. Or with the rainbow, which is always present at the waterfall and can be seen from a few kilometers away. The appearance of the rainbow is explained by the normal laws of physics: an infinite number of water droplets raised in the air refract sunlight and produce the rainbow.

There is also a fairy tale suggestion for the origin of the name. I remember that in Irish folklore there is a mythical character, a leprechaun, who hides a pot of gold in the place where the rainbow touches the ground. And since the rainbow is an integral part of the waterfall, perhaps the Icelanders borrowed the fairy tale character and his gold from the Irish. But this version does not claim to be official.

READ
The Tower of the Winds in Athens is the world's first weather station. Greece 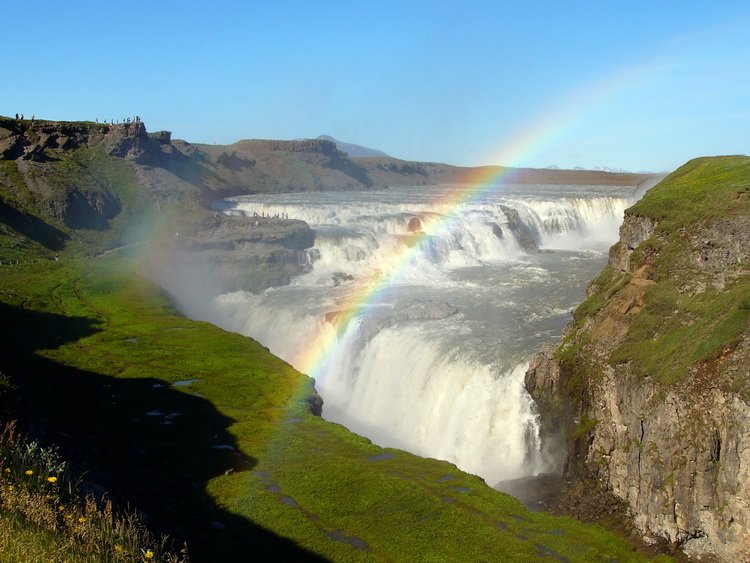 Be that as it may, the Gudlfoss Falls does have a certain fabulousness to it. It is its natural appeal.

Despite the fact that its total height is only 32 meters, it is one of the most impressive waterfalls on the planet and definitely the most famous waterfall in Iceland.

It consists of two cascades, turned to each other by 90 degrees. The upper cascade is 11 meters high and the lower one is 21 meters.

Natural viewing platform is located just on the border of these cascades, so it opens unimaginable views not only of the waterfall itself, but also on its magnificent surroundings.

The plant life here is represented by mosses, lichens and dwarf trees. Yes, this is not the tropical charm of Bali, this is a completely different, cold, but insanely alluring charm. In good weather, you can see the white caps of a glacier in the northeast.

Gudlfoss and the power plant

A laudable wish – clean energy and jobs. But the idea failed. Partly for lack of money, partly because of the instability of the waterfall itself.

But there is another story according to which the power plant was not built, thereby preserving the natural pristine nature of the waterfall.

It is said that the daughter of the man who planned the plant was fascinated by Gudlfoss and told her father that she would throw herself from the precipice into the turbulent stream of the waterfall if he built the power plant there.

This story is cultivated in every way and must be told to tourists. Not far from the waterfall, there is even a peculiar monument with a bas-relief of this brave woman. But unfortunately (or fortunately) the story – a myth. 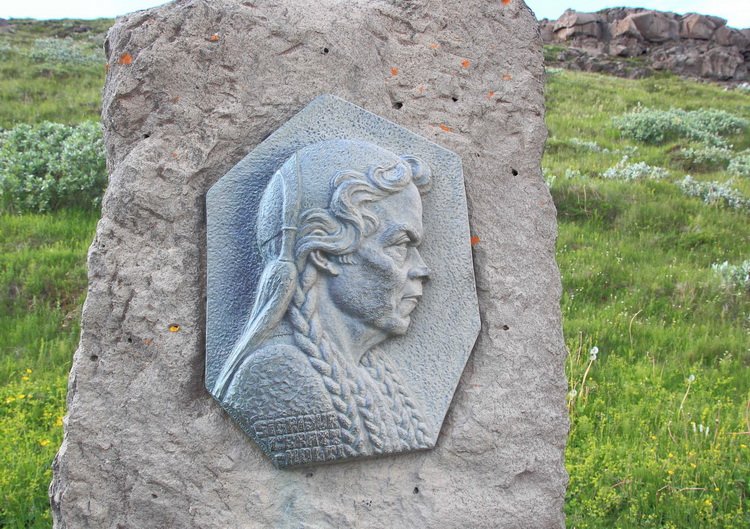 Monument at the Gudlfoss waterfall

We deliberately did not indicate the names of the characters in this story, because they are difficult to read and pronounce. But if you have a desire to know their names, then train your eyes and read below.

Eye exercises. So, the woman who threatened to throw herself into the waterfall was named Sigriudur Thomásdóttir. Her father’s name was Thomas Thomasson. And the name of his friend and companion was Halldor Halldorsson.

The waterfall is now protected by the state and is part of the Golden Circle of Iceland (this is a popular day trip with a visit to the Haukadalur Geyser Valley, Tingvellir National Park and Gudlfoss Falls).

You can get to the waterfall on a path that looks like a river in the photos. In fact, it’s a very wet splash trail that leads you to a nature observation deck. 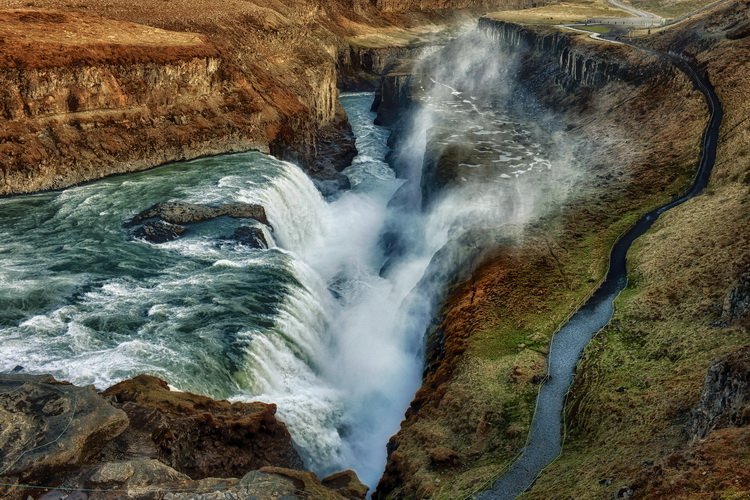 The dark, winding strip on the right is the splash-wet trail to the waterfall

A few hundred yards from the waterfall there are two parking lots (which, by the way, are rarely empty). A small parking lot closer to the Gudlfoss, and a second, quite decent-sized parking lot a little farther away. There are cafes and stores in the big parking lot.

If you have more than two days to spare while in Iceland, go to the Gudlfoss waterfall immediately after visiting the geothermal Blue Lagoon and experience the contrast.

Golden Gudlfoss Falls is not for sale! A story of true friendship

We arrived at the Golden Falls of Gudlfoss already in the evening. Because Gudlfoss is the last and the farthest from Reykjavik point of the route “Golden Ring of Iceland”, and by this time we had already visited Tingvellir National Park and the Valley of Geysers. The famous Golden Falls greeted us with a rainbow and a generous gift.

Wikipedia (and a million and a half other sites stealing information from it) tells us: “The golden Güdlfoss waterfall in Iceland consists of two 21-meter and 11-meter high steps, turned at right angles to each other.” This is true, but not true. If you admire Gudlfoss from the parking lot, which is just above the level of the waterfall, you really see two levels. The upper one is smaller, and the lower one is powerful, wide, falling into the abyss with a wild roar and flowing away along a beautiful winding canyon. And you also see a rainbow: the Golden Gudlfoss waterfall is famous for its rainbows, which constantly form over it in clear weather. Like these: 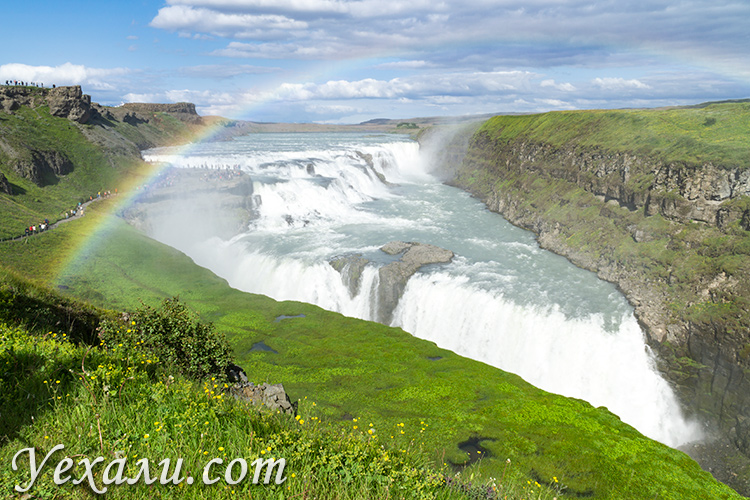 Toto, I have a feeling we’re not in Kansas anymore. It looks like we’re behind a rainbow! 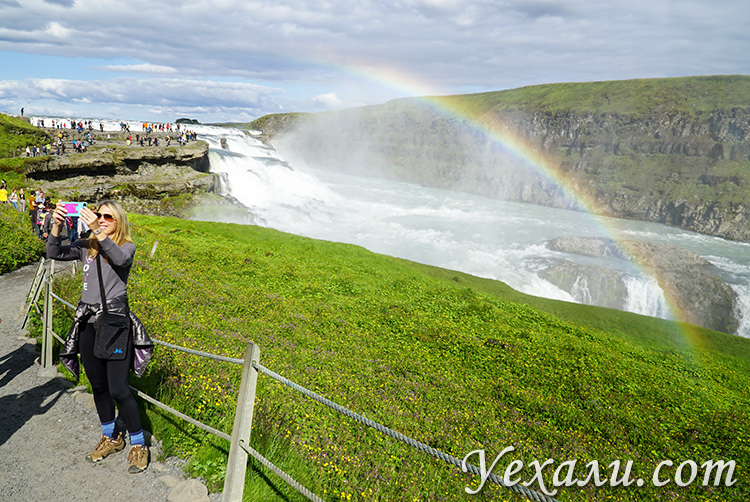 They say a smile in the sky will wake up a rainbow? Let’s find out! 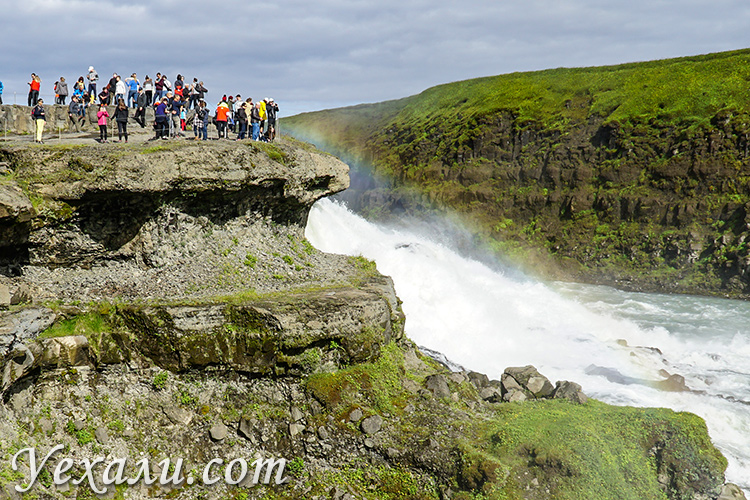 And here’s where the rainbow gently descends following the stream of water. Can you see it?

Now let’s go where everyone else is going – let’s take a closer look at the Golden Gudlfoss waterfall! As you can see, the folk trail to the falls is not overgrown. 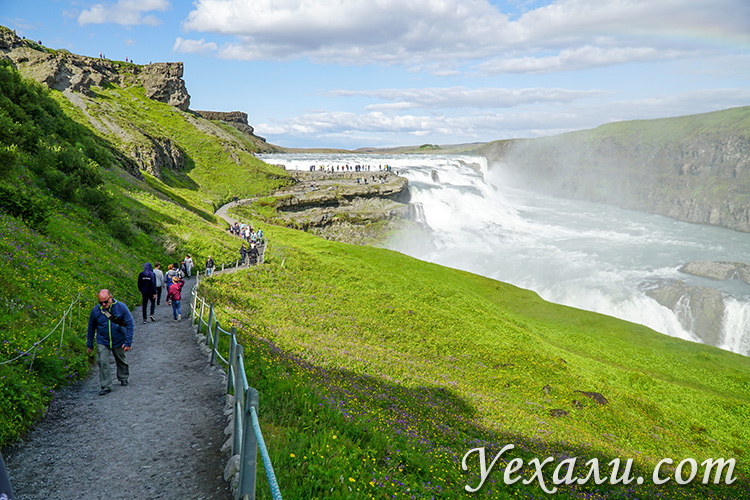 Golden Gudlfoss Falls in Iceland, going down closer to the water. And you can still see the rainbow a little bit in the upper right corner. 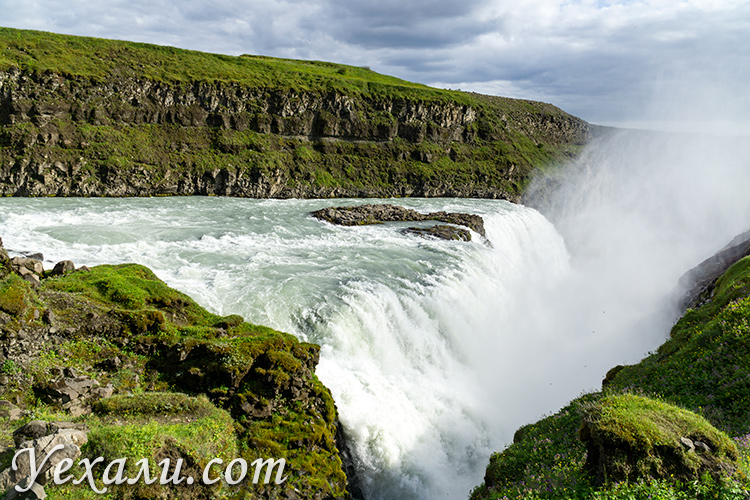 Here’s where Gudlfoss Falls falls from a 21-meter height… 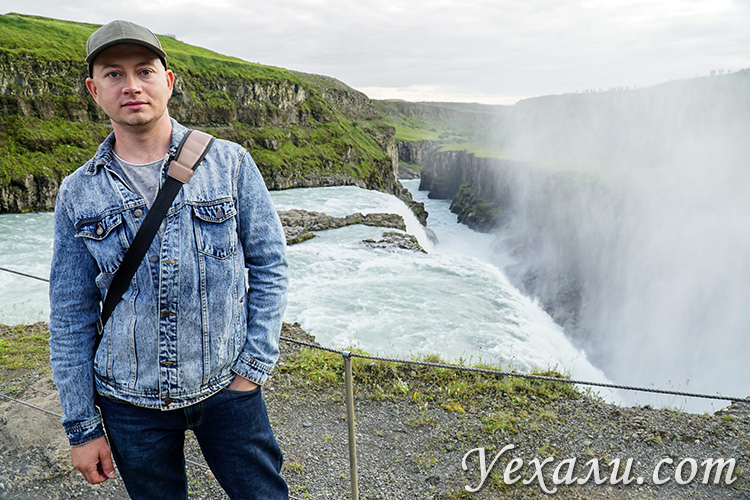 …and rushes into the mysterious distance along a narrow winding canyon. 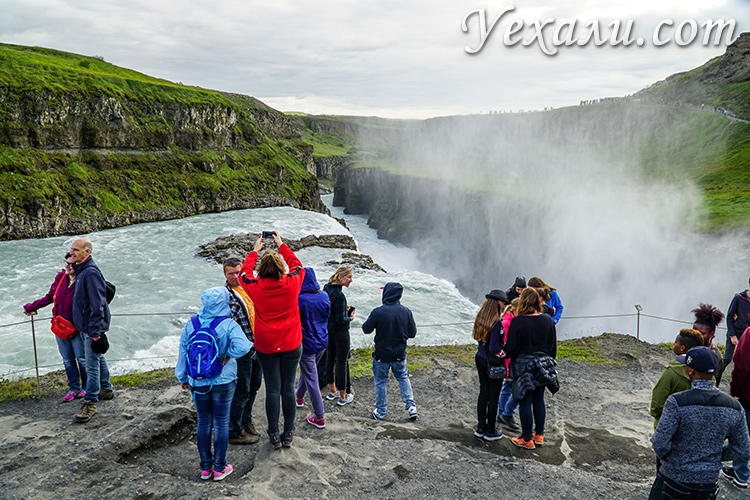 And there was a time when they wanted to build a hydroelectric power station on the place of this beauty! But we will talk about it a little bit later.

We are real fans of waterfalls, we love to explore them up and down. What waterfalls we have climbed from the most eastern Asia to the most western Europe! So when we got to the second level of Gudlfoss, we could not stop and we rode the wet rocks even higher. And what do you think we discovered there? Unknown to modern science (because it is practically invisible from the observation deck near the parking lot) the third level of Gudlfoss waterfall!

In honor of the discoverers, the third level of Gudlfoss is now officially called Uehalicomfoss (Uehalicomfoss). Quite Icelandic style – at least the Icelandic State Committee on Personal Names and Names did not protest. 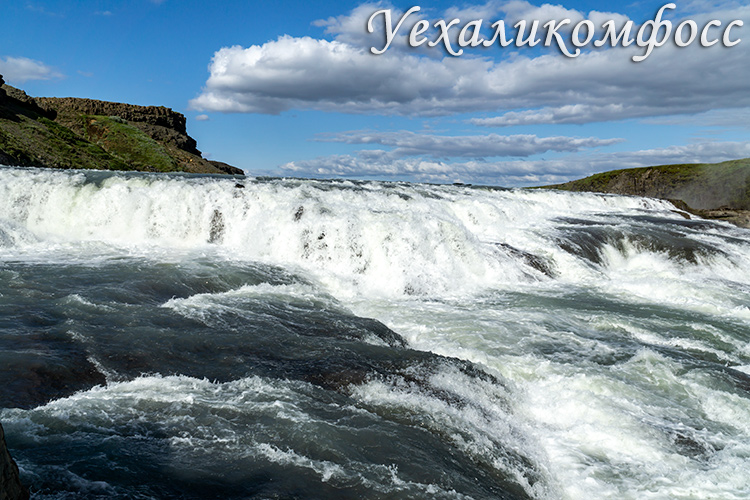 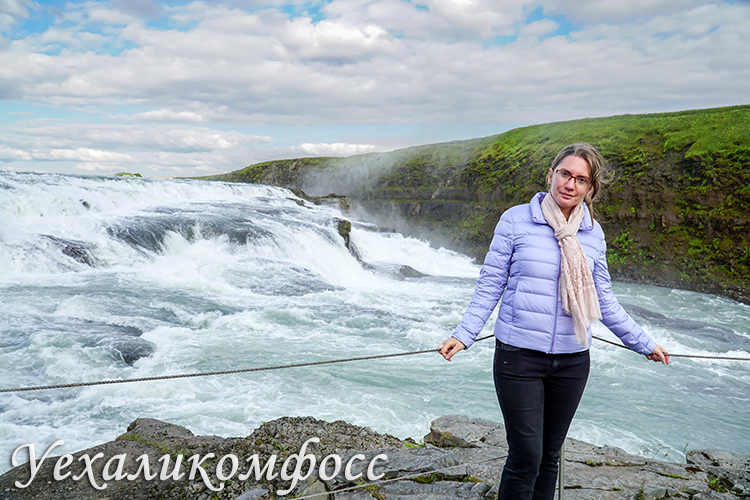 Picture to remember for history. 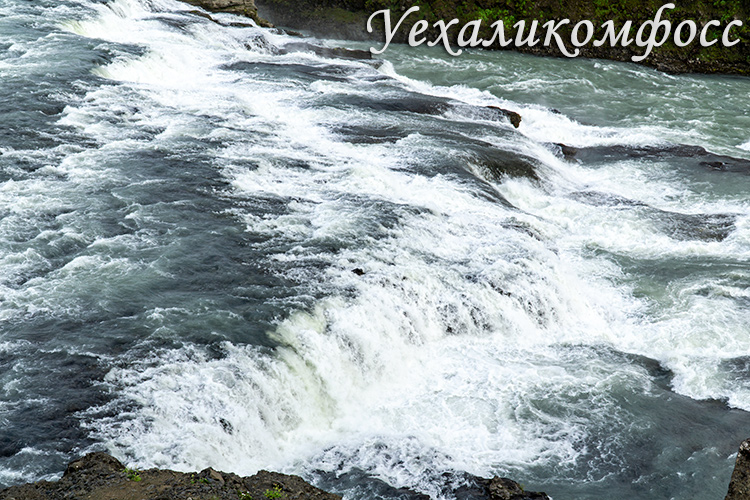 The beauty of Güdlfoss Falls is that it can be admired from many different vantage points and vantage points. You can walk right up to the waterfall or step back; you can admire it from a side view or a side view; you can walk across the ever-wet rocks to Uehalikomfoss or wander around the neighborhood, where you can see the waterfall from new angles each time you see it. You could spend hours here! And on the highest observation deck we found an information booth, which Icelanders dedicated to their favorite. It also tells us that several times there were plans to build a dam on Gudlfoss, which would have destroyed the waterfall. But every time, Gudlfoss came out dry (ha ha).

One story about Gudlfoss Falls is printed on the booth under the heading “I won’t sell my friend!” We quote it verbatim.

In 1907 an Englishman wanted to use the power of the Gudlfoss to generate electricity. But Thomas Thomasson, the farmer who owned the land on which the waterfall is located at the time, turned him down with the words “I will not sell my friend!”

Later the waterfall was leased to foreign investors after all. The farmer’s daughter, Sigridur Tomasdottir, tried to have the contract terminated, but lost. But the power plant was never built, and in 1929 the contract was cancelled because no payment was received from the investors. As for Sigridur, she was constantly fighting selflessly to preserve the falls. She worked tirelessly, undertook long journeys across the mountain ranges, crossed turbulent rivers and constantly met with officials in Reykjavik. Because of this, she is often referred to as Iceland’s first environmentalist.

In 1979, the golden Gudlfoss waterfall and the surrounding area were declared a nature reserve. Nothing else threatens this beauty, with which no other waterfall in Europe compares, and its primeval power eclipses even Niagara Falls. This, by the way, is also not my phrase, but the feedback of Danish travelers who visited Gudlfoss in 1907. 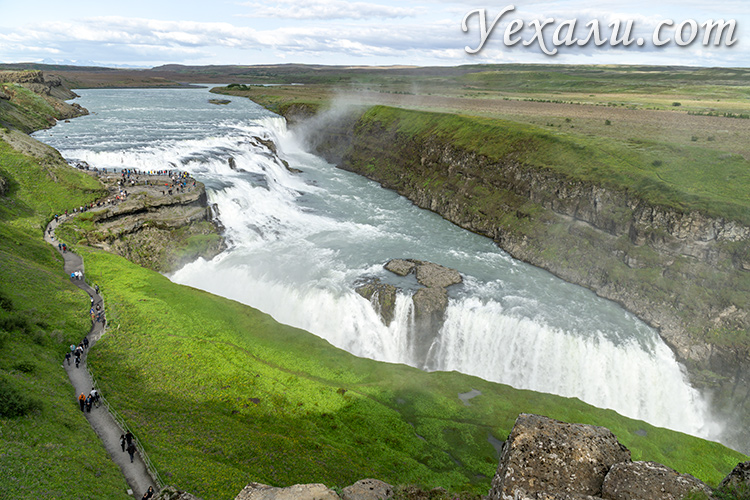 Golden Gudlfoss Falls in Iceland, photo from the highest vantage point. No rainbows this time. 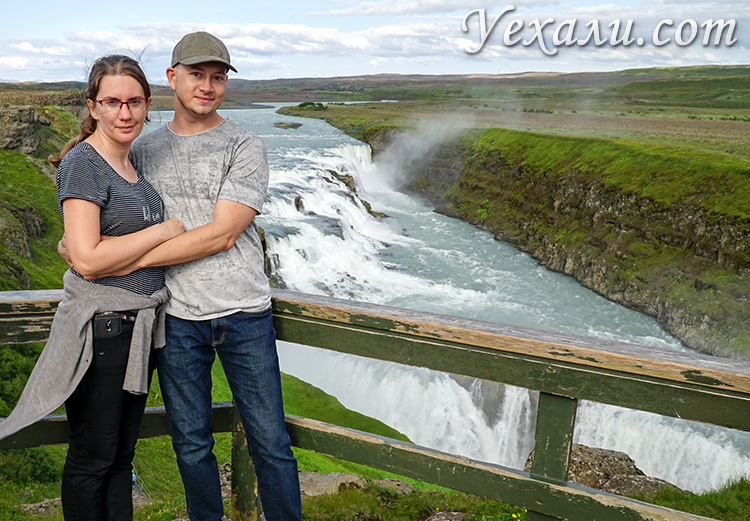 To make sure no one fell during the photo shoot, the caring Icelanders enclosed the observation decks with a fence. 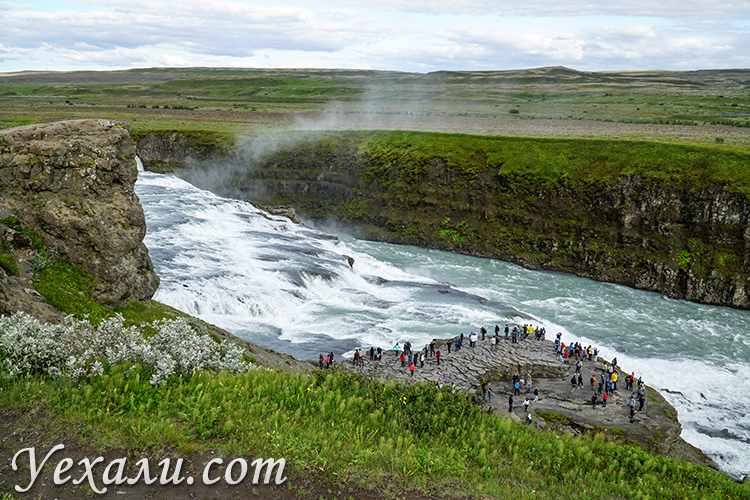 The golden Gudlfoss waterfall in Iceland is not only high and wide, but also very “long” considering all its levels.

A decades-long walking path takes you through all the levels and vantage points of the Gullfoss waterfall.

Time for a rest

As mentioned, Gullfoss is the terminus of the Golden Ring of Iceland hiking trail. After it, travelers usually spend the night somewhere nearby, so that in the morning they can move on to the wonders of the south shore. We, too, spent the night in the vicinity of Gudlfoss. Here’s a selection of a few hotels and campgrounds with good value for money that we ourselves would stay in.