Sometimes the steps seem to lead straight up into the sky, hiding in the clouds. Hence the name. In all, the path stretches for 1,220 meters. The top point is 610 meters above sea level. The stairs are about half a meter wide. 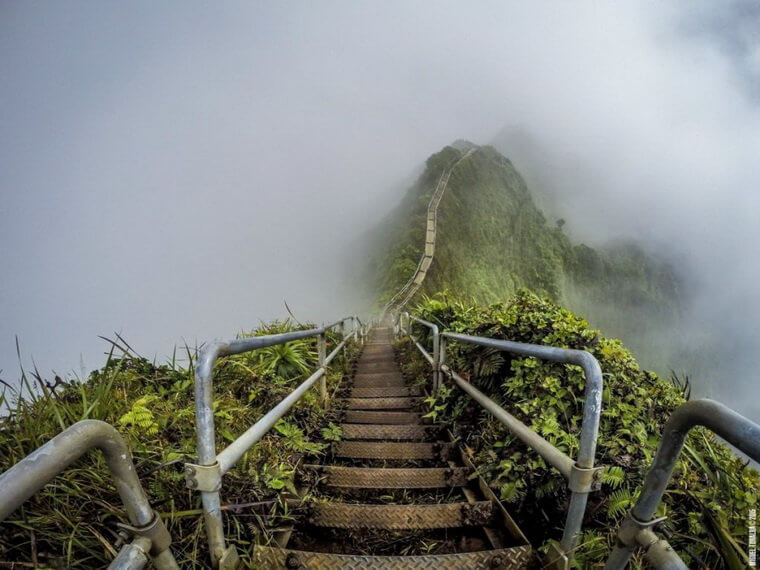 Where is the Haikou staircase

The stairs are located 2 kilometers west of Kano City in the southeastern part of Oahu, and 10 kilometers north of Honolulu (the capital of Hawaii). 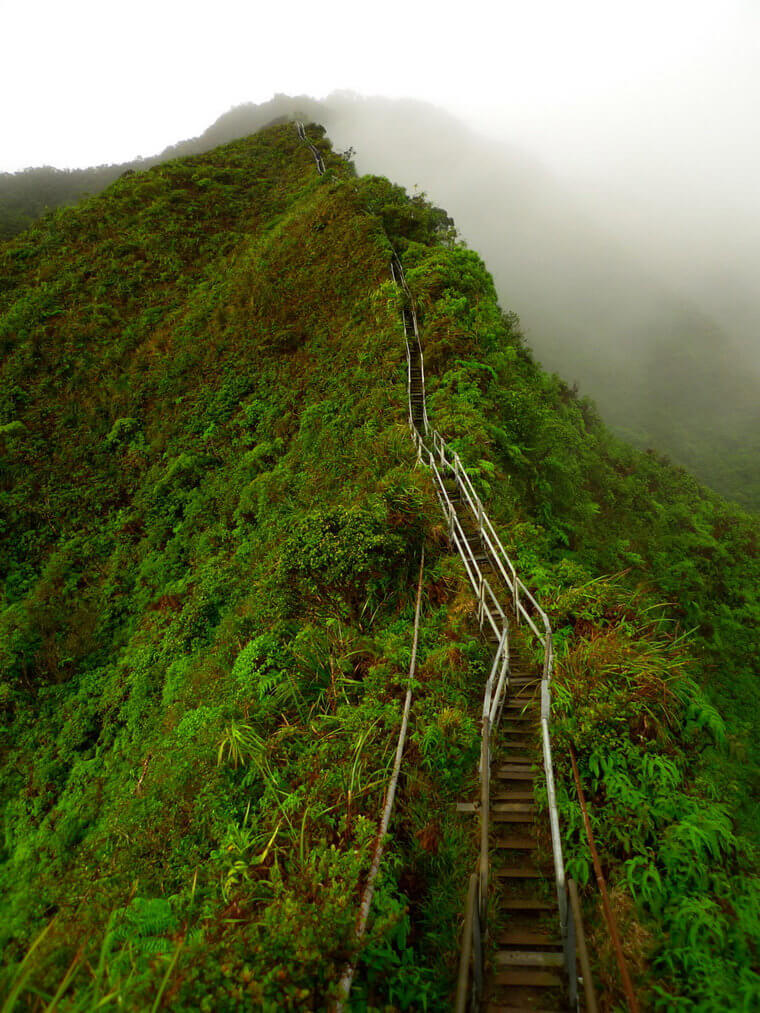 History of the Stairway to Heaven

Neither Indians nor tourists have anything to do with the Haiku Stairway. The trail, originally built as a simple wooden ladder, served an important role for the U.S. military during World War II.

In 1942, construction of a top-secret and incredibly powerful radio transmitter began on the island. It was to communicate with U.S. Navy ships in the vast area of the Pacific Ocean. 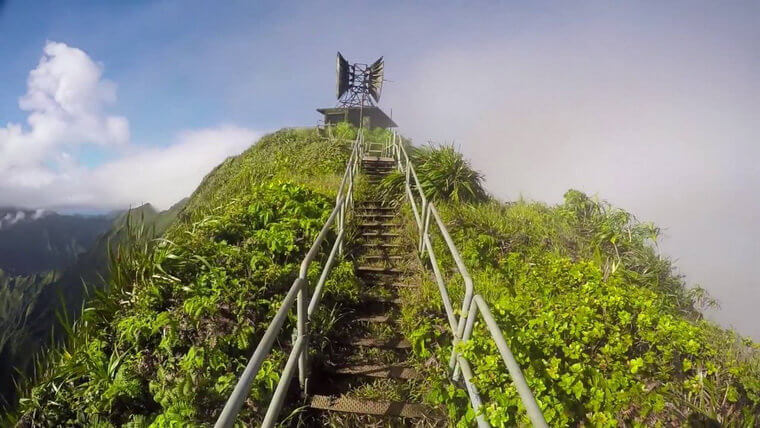 Transmitter on top of a mountain

According to some reports, the transmitter had a range of over 6,000 kilometers. It was capable of “reaching” the coast of Japan.

The transmitter used ultra-long wavelength low frequency VLF (English version VLF). The project required a gigantic size radio transmitting facility. But unlike other VLF transmitters, this station did not use towers. Instead, it used antennas mounted on the mountain peaks of the Haikou Valley. These, along with the main building on the peak, could transmit signals that reached the submarines even when they were submerged.

To facilitate access to one of the mountain peaks, a “ladder to the sky” was built. The military, of course, cared little for the magnificent views of the ascent, and in vain. There’s a lot to see – the surroundings covered in dense greenery and the endless Pacific Ocean.

READ
The Arizona Wave is a sandy sea without water. USA 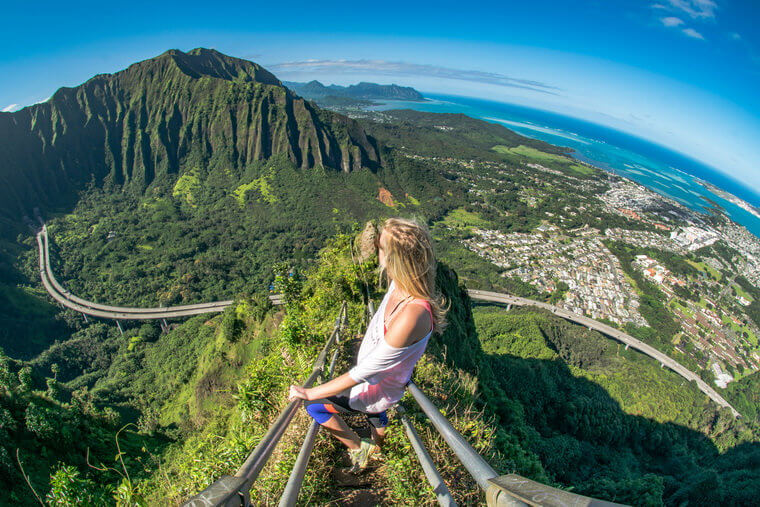 View from the Haiku Stairs

In the 1950s, the wooden steps of the staircase were replaced by metal ones. Some parts of the wooden staircase can still be seen next to the metal steps.

In all, the staircase has 3922 steps. This is much larger than the famous staircase leading to the Heavenly Gate in China.

In the late 1960s the transmitter was converted into a station for the OMEGA navigation system which remained in use until the completion of the OMEGA project on September 30, 1997. 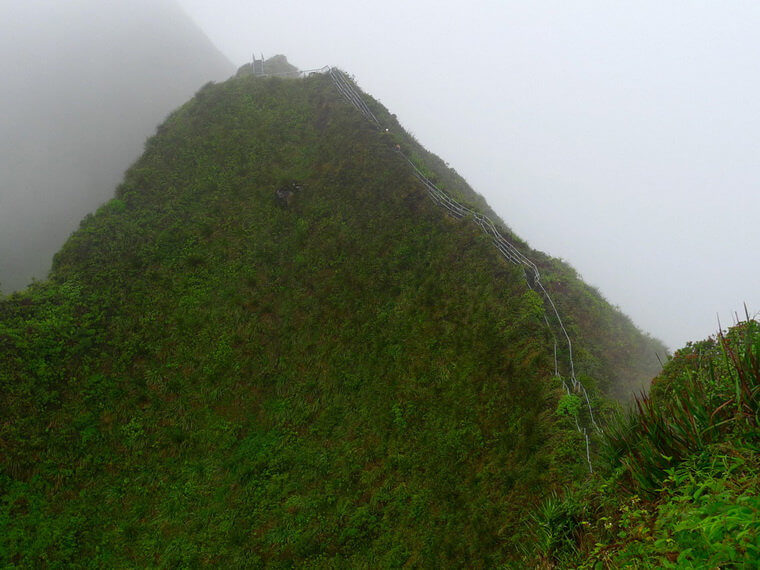 This landmark cannot be called very famous due to the fact that it is part of a military installation. Nevertheless, from time to time some hikers have climbed it to the top of the mountain.

The trail was officially closed to tourists in 1987. There are forbidding signs at the entrance and even a guard is present. The city attorney’s office imposed a $1,000 fine for violators. But this does not stop travelers. 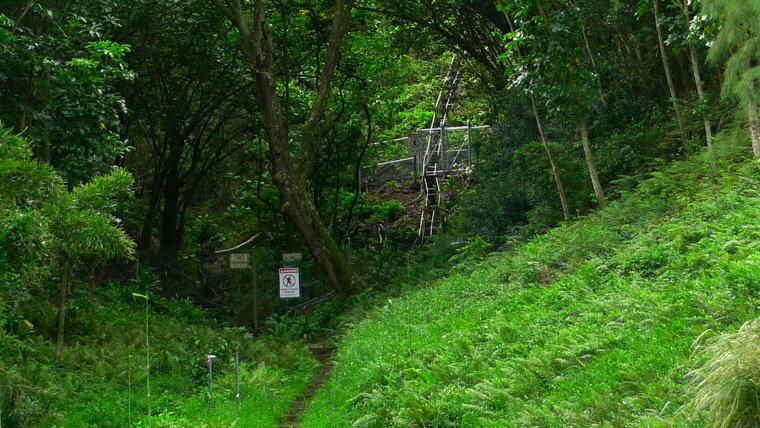 This is what the entrance to the Haiku Staircase looks like

From 2014 to 2015, at least 11 people were arrested and 463 received warnings. But that’s only the ones who were spotted. Those who have gone undetected try to conquer the stairs. Almost every day, hikers storm the climb.

It is worth noting that the ascent, in addition to being illegal, is also very dangerous. Perhaps even comparable in its extremity to the Trail of Death on Mount Huashan. 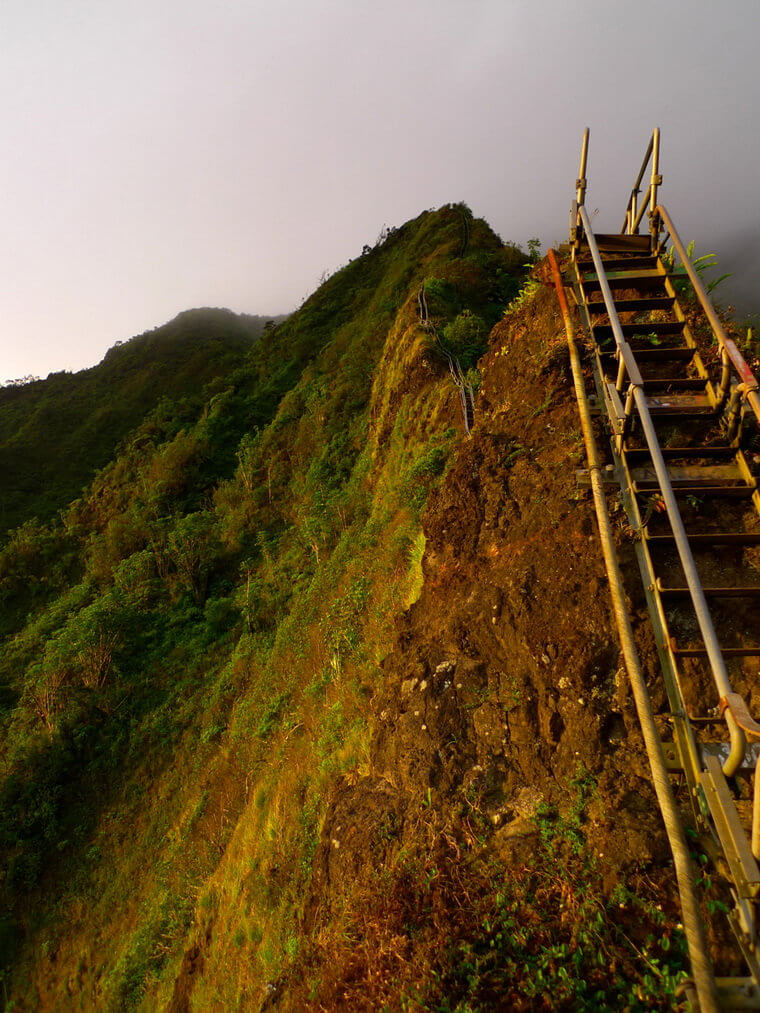 Climbing stairs into the sky is very dangerous

Hawaii. Stairway to the Sky

Hawaii is an island paradise with hot white sand for a relaxed, measured vacation. Really? Our Hawaii is endless rain, mud, blocked roads and forbidding signs. Our Hawaii is about crazy adventures in the clouds, uncharted trails in the woods, and feeling completely alone in the sky.

See how it was!

Instructions: how to find the Stairway to Heaven

The stairs were built in 1943 as a top secret U.S. Navy facility. Then it was temporarily opened for visitors, but in 1987 it was closed again because of the danger of the object.

Can you imagine a more desirable target for adventurers?

And so, despite all the bans, guards and endless fences and forbidding signs, the most intrepid hikers head to the top with an abandoned radar tower on it every day.

1) When choosing clothing, assume the attitude that you are likely to get caught in the rain, fall in the mud, and sit/lie on the ground. You don’t want to wear something you would be sorry to throw away. The shoes should be comfortable. It is better to wear special shoes for hiking, but sneakers are also good.

2) Take a lot of water with you. 3922 steps in the heat causes a strong thirst. And if it rains, there will be something to wash your hands, feet and face after climbing another hill.

3) Get out early in the morning. The whole process will take 5 to 7 hours. Going up/descending after sunset is life-threatening.

4) Take your camera, camera, quadcopter for sure. But don’t forget to stash them in a waterproof bag.

5) If you do not have health insurance, buy it. At least for that one day. Lack of insurance was the only thing I regretted this day…

So. The hardest part is getting to the beginning of the stairs. The local authorities do everything to weed out the most unstable at this point.

You drive to Kuneki Place. That’s where you park. You do it quickly, so the locals do not notice you and do not chase you away before your time.

Open the application Maps. Me application and find Haiku Stairs. There is usually a guard at the intersection of Highway 3. He can fine you or, worse, not let you in. Accordingly, your task is to bypass him. In Maps. Me black dotted line drawn two paths in the woods, which can bypass the guards. Follow them to the highway, go under the highway, and then go diagonally to the stairs. You need to get out of the forest exactly at the point where the stairs steeply go up. You will see. If you run into a fence – follow it to the stairs. There’s a passageway there.

If you do run into a guard, do not panic. He is a local, which means that he himself has climbed these stairs 100 times. And he understands you very well. It’s just his job right now. Be polite and friendly with him.

The problem is that occasionally the paths in the woods turn into a mess of dirt that you have to climb up. It’s hard enough. And even dangerous. I fell and badly pulled a muscle somewhere in my rib area. So I only know about stage III from Thema’s stories and pictures.

The climb itself. You won’t get lost here. Just walk up the stairs and enjoy the views. I’ve seen pictures in good weather and in the rain. I think it’s even cooler in the rain – the scenery becomes completely unreal. But the stairs get wet and slippery. Watch your step and hold on to the railing.