Fans of water sports, exotic diving and beautiful beaches will be able to appreciate the place, which will be discussed in today’s review. Mentioning of what islands conjures up thoughts of huge waves, on the crests of which there are surfers here and there, and exotic natives still catch the eye with their bright outfits and ancient traditions? 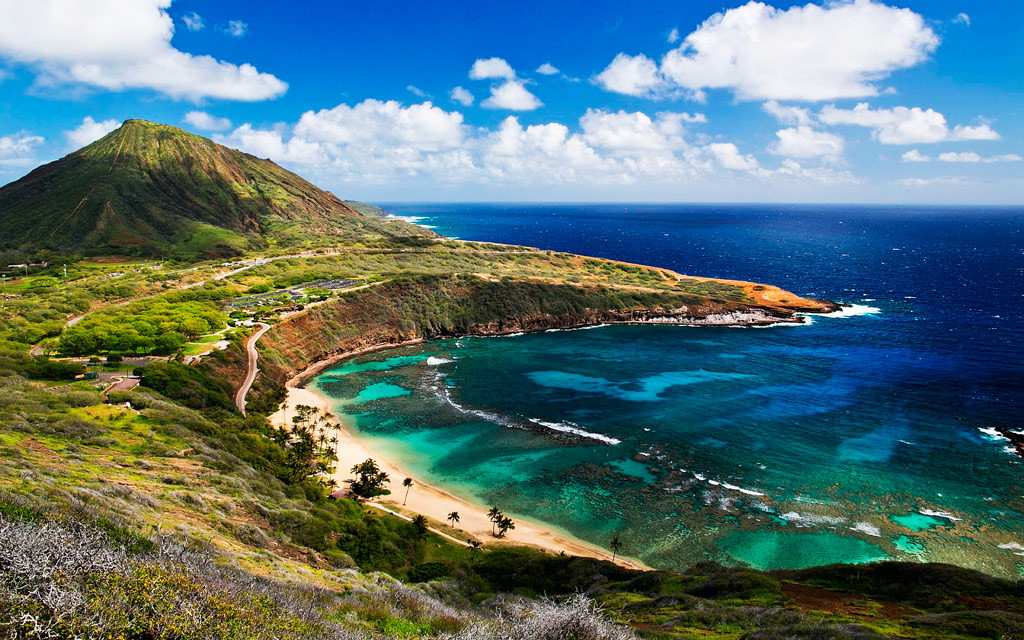 Today we’re talking about Hawaii, and we’re especially interested in the island of Oahu, which is a true paradise in the south. The beach of Hanauma Bay is a unique place, because it is located in the submerged crater of an ancient volcano, which, judging by its size, repeatedly plunged into the true horror of the indigenous tribes, who took over this fertile land. 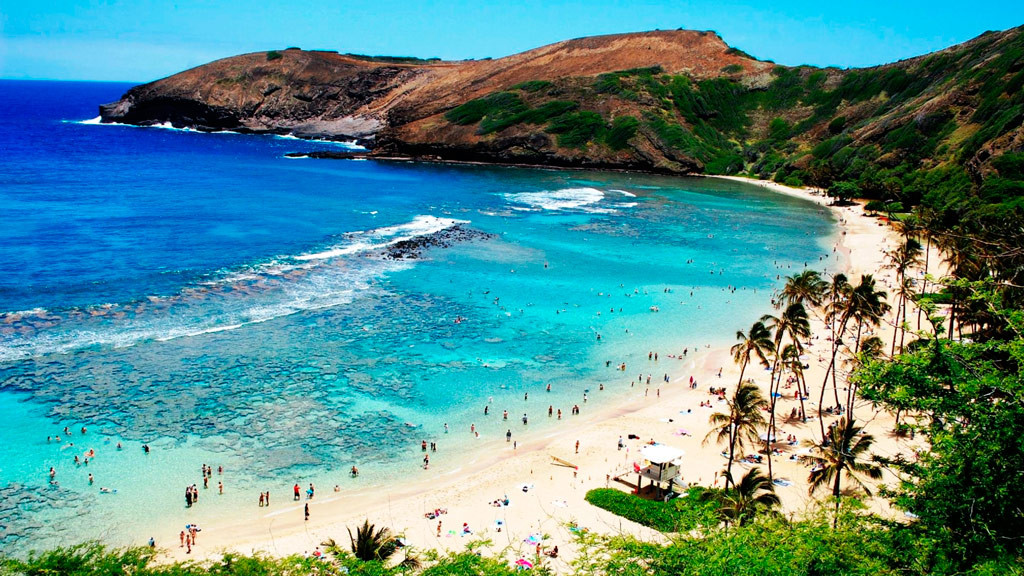 If there is a paradise on Earth, its name is Hanauma Bay

Hanauma Bay is located as if he tried to hide from the inquisitive eyes of the many tourists to the last. In 2004 the beach was voted the best resort in America and is still considered the most popular place for divers and everyone who is partial to water sports. 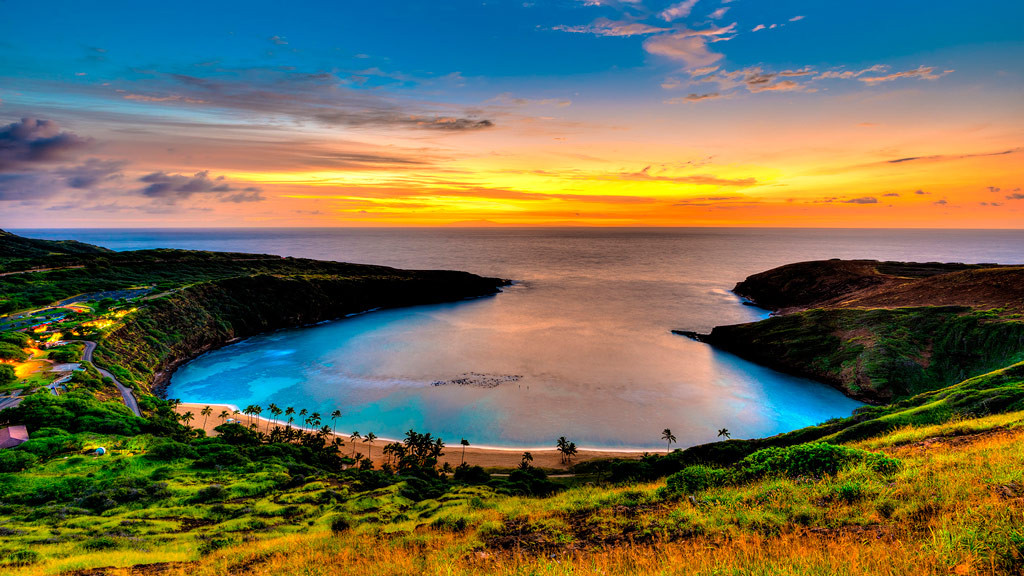 The purity of local waters is amazing. There are not many places in the world that can boast the crystal clear ocean waters of greenish-blue color, which allow you to consider the diversity of the underwater world. Therefore, every year to rest in these wonderful places go millions of tourists and regular visitors, among whom often can be found stars of show business, movies, and even top officials of the state.

The beach boasts a comfortable climate that creates perfect conditions for both extreme recreation and just a measured swimming. Therefore, for those who are looking for a new place for family holidays that will give vivid impressions and charge with vitality and positive attitude for the whole year, the beach will be one of the most interesting proposals. 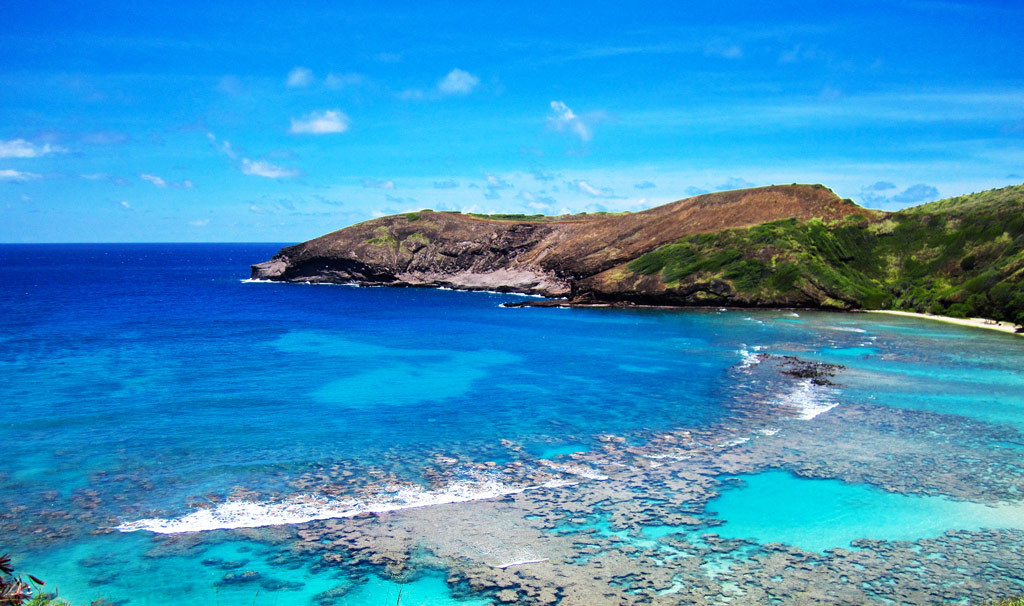 Deserves special attention a rich underwater world, which is represented by a huge number of fish, crabs and other underwater inhabitants. Just one species of tropical fish here more than 450. Except that in Hawaii, you will not find anywhere else such a huge coral reefs. It’s rich diversity of fauna and exotic local ecosystem led to the recognition of the territory of the beach Hanauma Bay nature reserve, whose main objective for several years is the preservation and multiplication of local wealth.

In addition to the giant corals and the most diverse fish, you’ll also find rare green turtles, which are also protected by the local ecology program. They are protected by the authorities, but tourists and divers are happy to pose for the cameras. 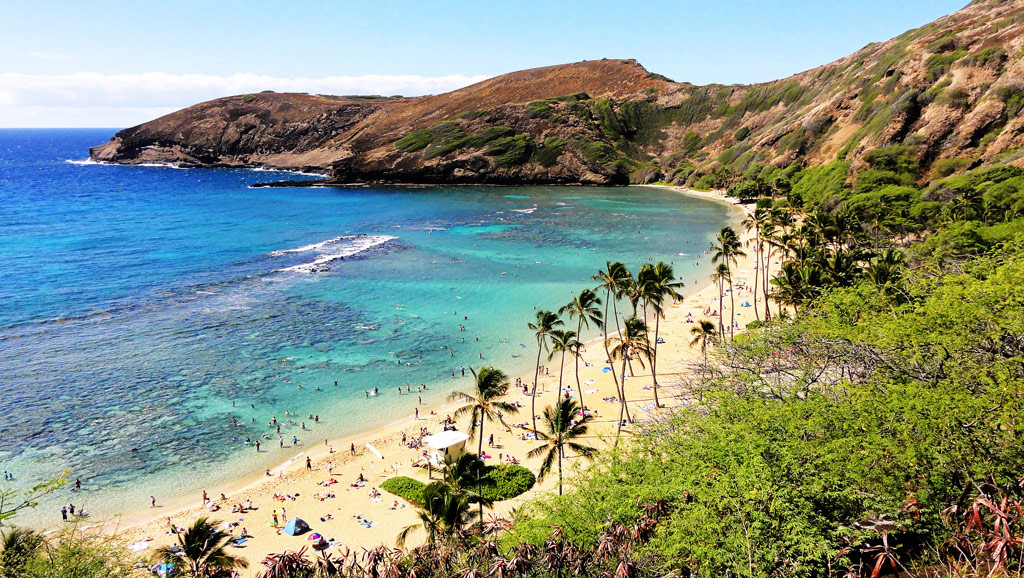 A meeting place for divers

For decades, professional divers and amateur divers who only want to experience the beauty of the underwater world have met on the shores of Hanauma Bay. It’s the most popular dive destination in Hawaii and one of the most famous in the world.

Thousands of tourists from all over the world come to see the unique species of fish and other organisms that have settled on coral reefs and rocky ledges of the former volcanic crater. Many species of underwater inhabitants are unique in their kind and are not found anywhere else in the world. Therefore, the local waters are attractive in terms of ichthyology and oceanology. 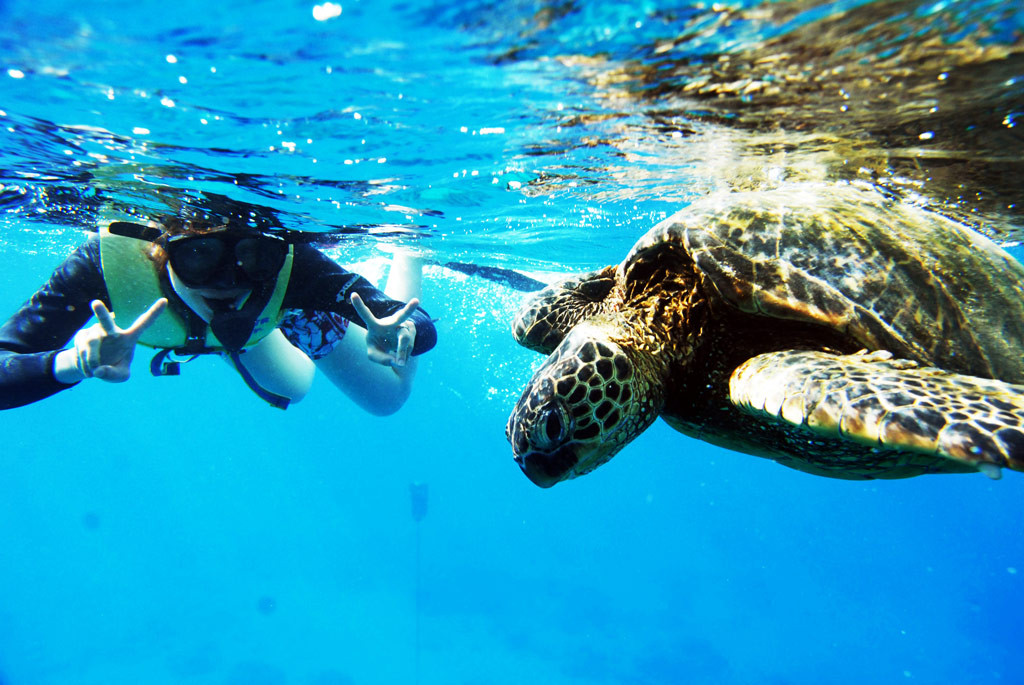 The government spends a lot of money to preserve the rich diversity of the underwater world, and a special environmental program provides for days when it is forbidden to visit the beach. For example, access to the beach is restricted every Tuesday. In this way, the authorities are trying to reduce the already enormous pressure on the local ecosystem. And it works, you have to say. The beach and water are considered some of the cleanest, and the riot of tropical plants gives everyone the opportunity to imagine how America looked like in ancient times.

READ
Maho Beach with planes over the beach. Isle of St. Maarten.

At the service of numerous tourists are firms where you can rent diving equipment, as well as use the services of professional trainers who will help you learn the basics of this amazing kind of recreation. The cost of services here, perhaps, and will be a bit higher than in other similar places, but vivid impressions and inexpressible emotions that you get, having plunged into the depths of the ocean, will remain an excellent reminder of your first acquaintance with the underwater world. 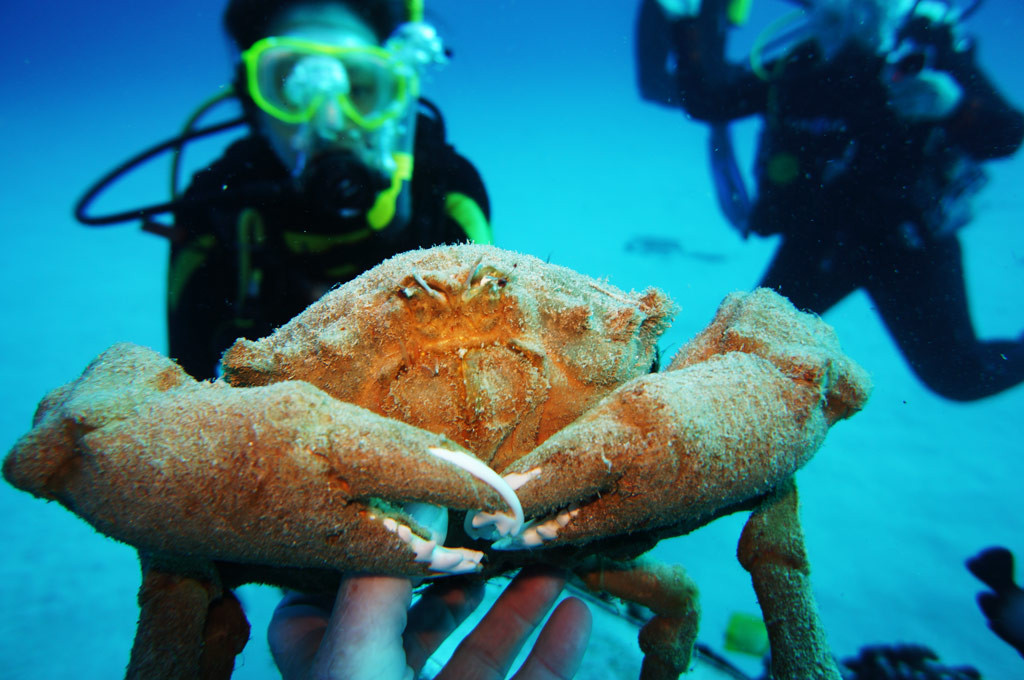 And what a fishing trip! They say that the fish in this area bites in a special way, as if Neptune himself lays a catch on the hooks of anglers. Since the 18th century, the kings of Hawaii came to love these rich and fertile fishing grounds, and since then the place has never been empty. To prevent an ecological disaster, large-scale fishing has been banned. Therefore, fishing here is mainly sport and recreational, and commercial fishing is simply forbidden. Hanauma Bay is considered a kind of reserve of some tropical fish species. One of these species is even considered the official symbol of the Hawaiian Islands. We are talking about the colorful fish with the most original name – humuhumunukunukuapuaa.

Paradise in the midst of the tropics

Hanauma Bay, whose name literally can be translated as “curved bay,” is considered a true paradise in the tropics, luring crowds of vacationers with its snow-white beaches and lush greenery. 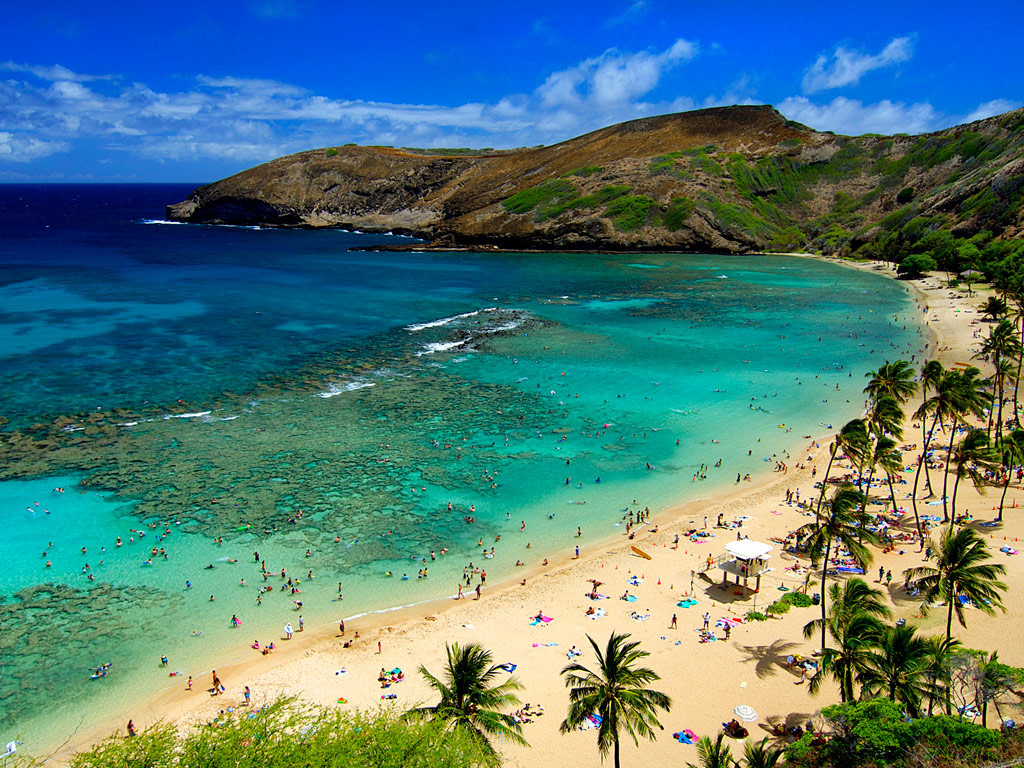 The amazing beach was formed a few thousand years ago, when part of the volcanic crater collapsed into the sea, opening up to the gushing in place of the break waves. From this moment and formed a kind of a bay, on the shores of which so love to spend time many vacationers. By the way, if we believe the local silent statistics, the beach is daily visited by at least 3000 people.

You know, if you blindfold a person who has never seen anything like that in his life and take him to Hanauma Bay Beach, pre-selected a place higher with a beautiful view of the bay, and then abruptly remove the blindfold, he may faint from amazement and delight! And that’s no exaggeration at all. The scenery here is simply dizzying. It is these breathtaking pictures that attract, like a magnet, all fans of such exoticism, true connoisseurs of nature and even young naturalists. 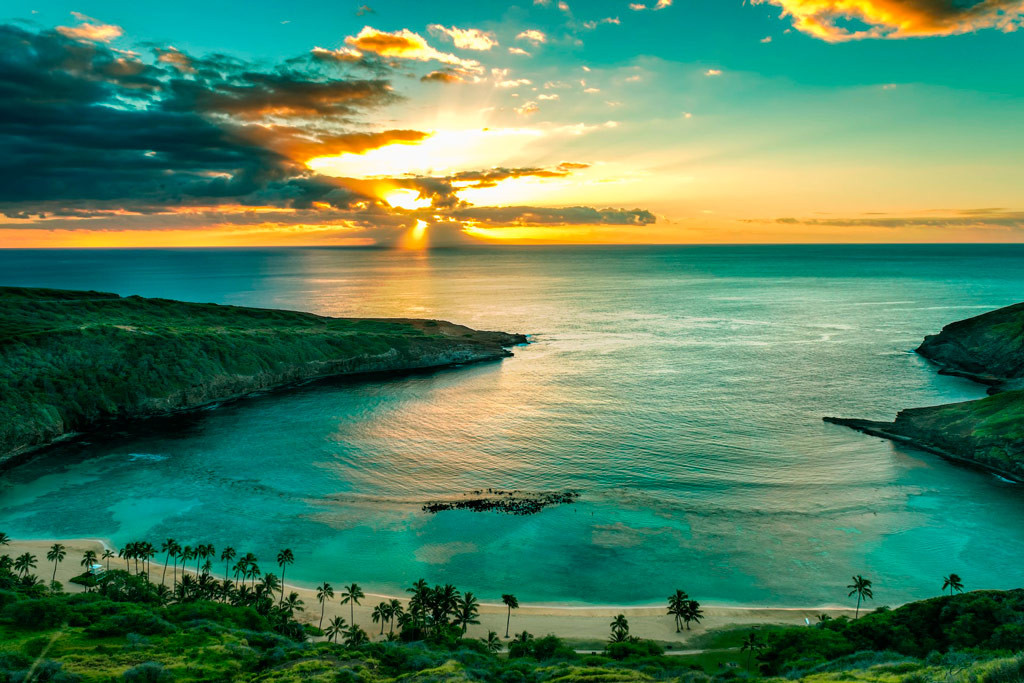 The flora is in no way behind the underwater world and includes a number of exotic plants and trees, many of which are also considered very rare. It is not for nothing that U.S. President Barack Obama himself came to love this place and quite often spends time here with his family, basking in the sun or strolling along the coast.

Thanks to the unique fauna, white beaches, special attitude of local authorities to the preservation of the ecosystem, and crystal clear sea water the beach was included in the list of the best beaches in Oceania, taking the 12th place. May through early fall is the most popular time to visit. The rest of the year there is a fairly cool climate, although you can see quite a few tourists who prefer to exchange a noisy summer vacation among the many vacationers for a quiet walk in the “cool” places Hanauma Bay with a camera, though without the possibility of a dip in the clear, but already cold by this time, waters. 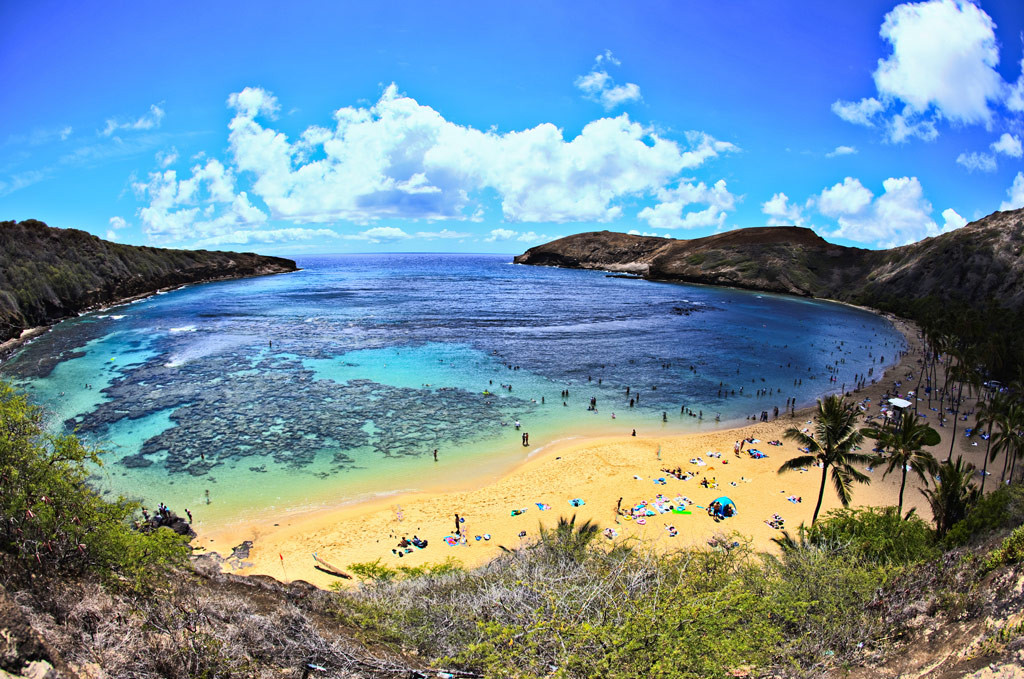 Tourists can visit this stunning place by getting to Honolulu International Airport in Hawaii. After that, all you need to do is put your luggage in a comfortable bus, and with anticipation of wonder, greedily absorb the scenery floating outside the window to new vivid impressions. 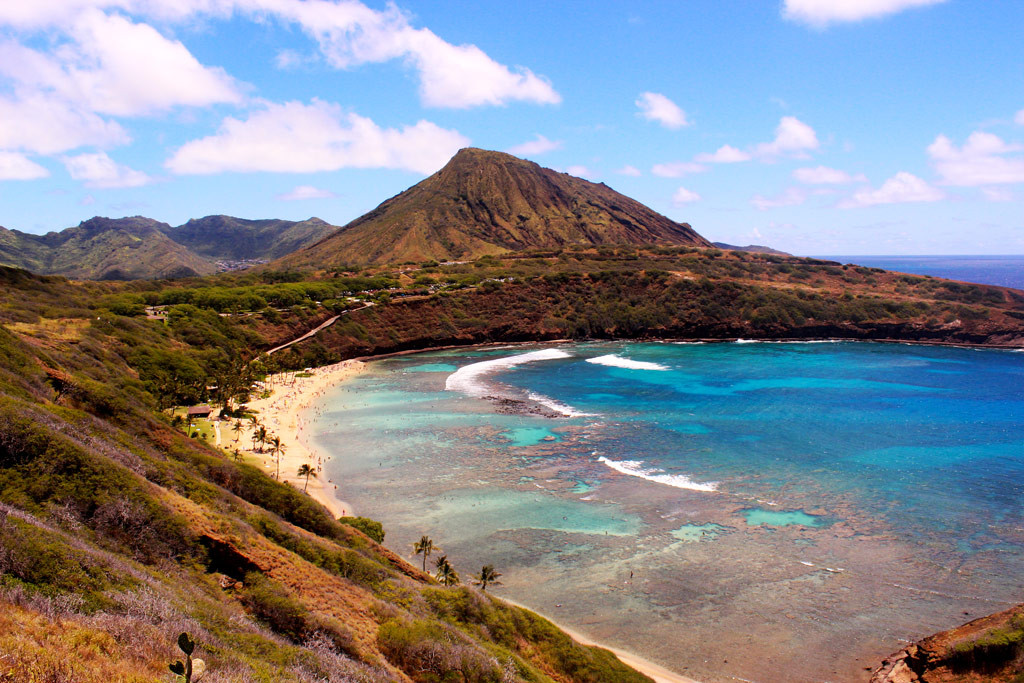 There is an alternative to public transport in the form of cabs. This method of travel will cost a little more expensive, but will help save precious time, which is sometimes so lacking for the little whims of many tourists.

For a comfortable stay, it is recommended to stay in one of the hotels that are located in Honolulu. Daily trips will not be overhead, because to get to the beach will only be a few kilometers. 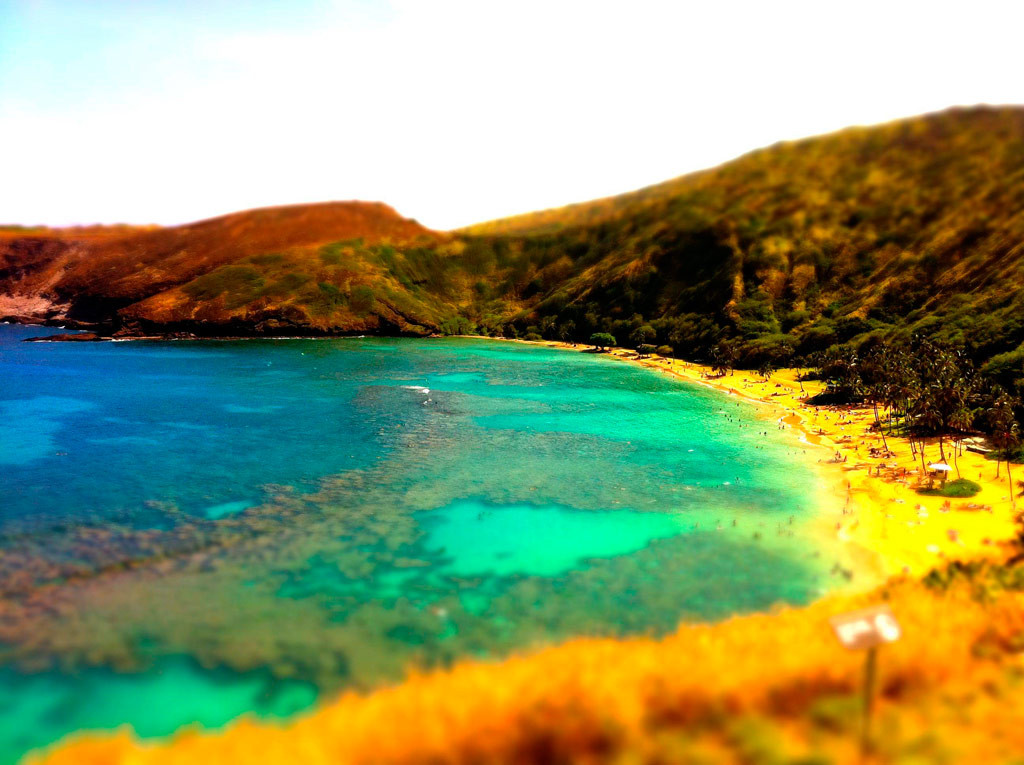 Before visiting the beach, be sure to view a short but very informative movie about the local beach, the history of its formation and the rules of conduct on it. It will allow you not only to understand the local traditions, but also to avoid possible misunderstandings with the local authorities. In the south of the island of Oahu, a dozen kilometers from Waikiki in the flooded crater of a volcano sits the best beach for snorkeling Hanauma Bay (Hanauma Bay). It’s a paradise, voted the best beach in America in 2004, and one of the best places in the world for divers and water sports enthusiasts. 1. Hanauma Bay is the most beautiful and famous beach on the Hawaiian island of Oahu.

2. The beach is located in a quiet enclosed bay, which is the crater of an extinct volcano, and is great for beach recreation and swimming.

3 But first of all this beach is famous for its clear waters and rich underwater world. Here the largest coral reefs in Hawaii. 4. Hanauma Bay is the most famous diving spot on Oahu. 5. In the underwater kingdom of the bay you can swim with more than 450 species of tropical fish that live here. Some are endemic to the Hawaii region.

6. In addition, amazing coral reefs abound here. The most visited tourist seasons are summer and winter. 7. In fact, Hanauma Bay is a nature preserve that aims to protect and guard against undue influence on the bay’s fragile and beautiful ecosystem. 8. Absolutely every visitor to Hanauma Bay should watch a short educational film before walking the gorgeous beaches. 9. It is important to know that Hanauma Bay is closed to visitors every Tuesday, as an environmental protection measure. 10. Hanauma Bay is a true tropical paradise, consisting of a white beach with lush greenery, which is complemented by the richness of the sea kingdom and coral reefs. 11. In the 18th century, Hanauma Bay was a favorite fishing spot of Hawaiian kings, and today it is protected as a sanctuary because of its unique tropical fish. 12. The reserve is under strict control. About 3 million tourists once visited Hanauma Bay in one year, but today that number is drastically reduced. 13. About 1 million people visit the bay every year, and about 3,000 people vacation here every day. 14. Back in 1967, an organization was founded to protect rare marine life. 15. Some hiking trails here run along the coast and along the ridge above the bay, which offers a spectacular view of all of Hanauma.