“The Whiskey War” ended in a visionary way.

Why Ottawa and Copenhagen finally divided the island of Hansa

The territorial dispute over the island of Gansa arose in the early 70’s when Canada and Denmark began negotiating about the delimitation of maritime territories and the continental shelf. The parties decided that since the island was not maritime territory, its ownership should be considered separately. However, no agreement could be reached on this issue.

And so the conflict arose. But not a single shot was fired and it was referred to as a “whiskey war” or a “war of flags. The essence of the confrontation was that every few months Canadian and Danish troops would land on the island in turn and fly their national flag over it. In addition, they left the “enemy” with alcohol as a present: either Canadian whiskey or Danish schnapps.

How Denmark and Canada settled the territorial dispute

And now this “soft” confrontation is over – the parties finally managed to agree, dividing the island roughly in half, told “Kommersant FM” journalist from Copenhagen Maria Andrianova: “At a recent meeting of foreign ministers of Denmark and Canada Geppe Kofoed and Melanie Joly came to an agreement on the border. Now 60% of the territory of Hansa Island will belong to Denmark, and 40% to Canada.

The border was drawn through a deep natural fissure that divides the island. I will add that Denmark and Canada also approved a maritime border of almost 4,000 kilometers.”

Hansa Island is a tiny rocky island, a little over one square kilometer in the Arctic Ocean, in the Kennedy Strait separating Canada and Greenland, which is an autonomous territory of Denmark. It is uninhabited, with no minerals on or near it. Some analysts, however, believe that it is no coincidence that Canada and Denmark have succeeded in resolving their long-standing territorial dispute now.

According to Alexei Pilko, director of the Eurasian Communication Center, despite its small size, Gansa Island has a certain strategic importance in the area where critical important Arctic sea routes may pass: “The territorial dispute between Denmark and Canada did not just happen, they have been discussing this problem for a long time.

Hansa Island is the border area between the countries, where the so-called Northwest Passage passes, which is a potential competitor and alternative to the Northern Sea Route.

How the geopolitical crisis is changing the ESG landscape

And this, of course, raises the question for those same NATO countries: what

is there an alternative? It can be found in the form of the so-called Northwest Passage. And in order to launch this alternative, Denmark and Canada have made some efforts to solve the problem.

However, during the “soft” confrontation between Canada and Denmark over the island of Hansa there were some aggravations. At the beginning of the century, the Danes twice sent frigates with soldiers to it. And then, in the summer of 2005, after landing on the island, the Canadian military not only hoisted the flag of their country, but also built a stone statue. A week later, the Canadian defense minister visited the island. After that, Denmark protested the unauthorized visit of Canadian authorities, calling Hans Island its territory. Then, in 2005, the sides made another attempt to resolve the territorial dispute, but could not agree among themselves.

The most intelligent war in history: Canada and Denmark fight over Hans Island, drinking schnapps and whiskey 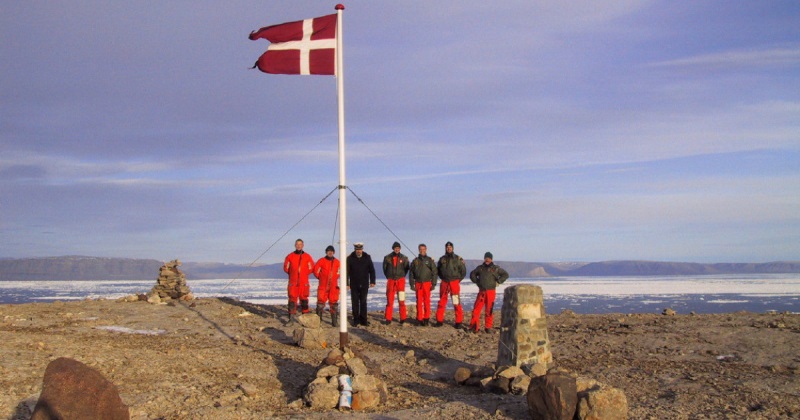 Hans Island is a lifeless piece of land, or rather a rock, located in the North Atlantic Ocean between Greenland and Canada. At one time, when the boundaries between the island belonging to Denmark and the country on the North American continent were drawn, they failed to identify the island and it has been the cause of the most harmless territorial conflict on the planet for 30 years. 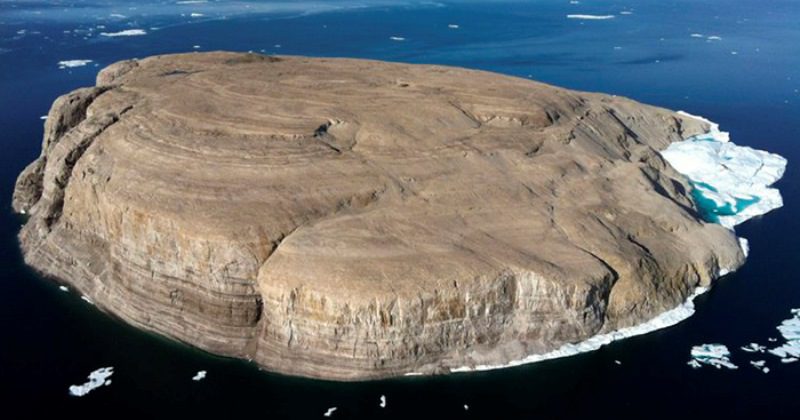 Nothing grows on Gansa Island, as there is no soil, no fresh water and, of course, no population. Even the snow does not stay on the smooth surface of the rock and is blown into the ocean by constant squall winds. It would seem – who needs a lifeless rock, located in one of the harshest corners of the planet? But neither Canada nor Denmark are not going to cede an inch of land they consider theirs. 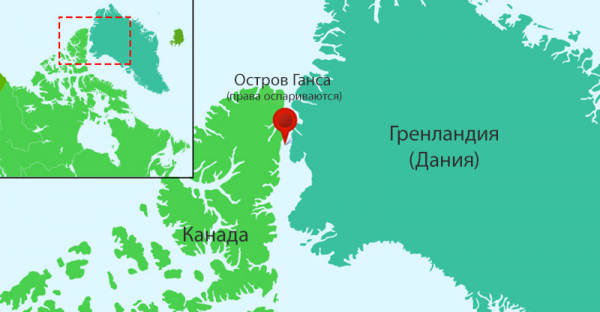 The island originally belonged to no one and had no name at all. The local Eskimos knew it perfectly well and did not attach any importance to the rock. The island was first surveyed in 1920 by the Danish scientific expedition, and in 1933, Hansa Island, together with Greenland was annexed to the Danish Kingdom. Then the island was forgotten for 50 years and remembered only during the navigation period, as a hindrance to navigation.

But then the time came to define the maritime boundary between Denmark and Canada, and the island of Hansa was remembered. The fact is that the definition of maritime boundaries was entrusted to a computer, which, without any wizardry, drew the boundary exactly in the center of the strait separating Greenland from the mainland. Gansa Island, as it turned out, was exactly on the line determined by the electronic device. 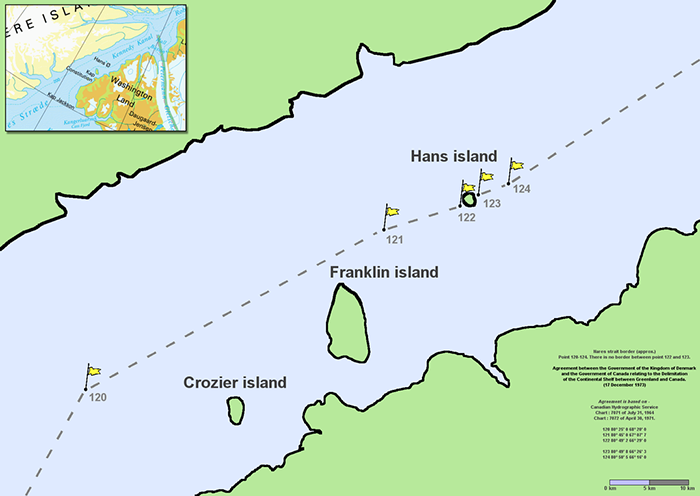 The boundary line consisted of 127 short sections and caused not the slightest doubt in the parties, except for one section – between points numbered 122 and 123. It was here that Gansa Island was located, which at the time of the delimitation was of no interest to anyone and remained a no man’s land. 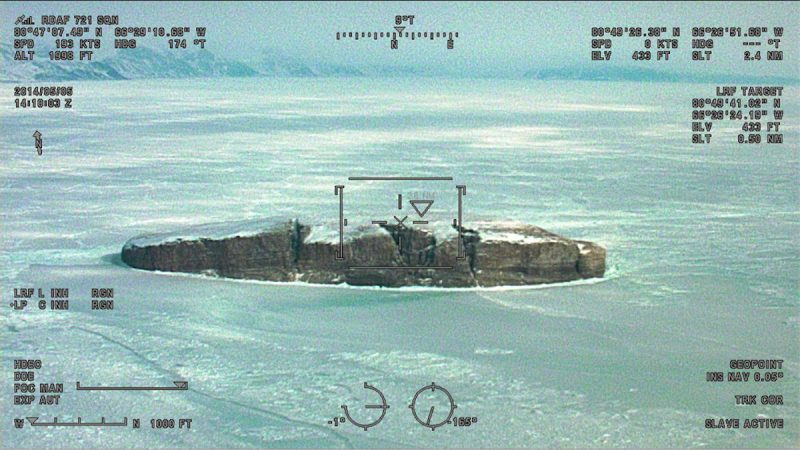 The dispute over the ownership of the rock flared up after a Canadian oil concern landed an exploration expedition on the island, which studied the composition of the rock and took ice samples. This caused concern in both the Danish and Canadian governments – what if the scientists find oil or gas there? So as not to make anyone jealous, the countries gathered a council and agreed to leave the island alone and not to conduct any exploration there. 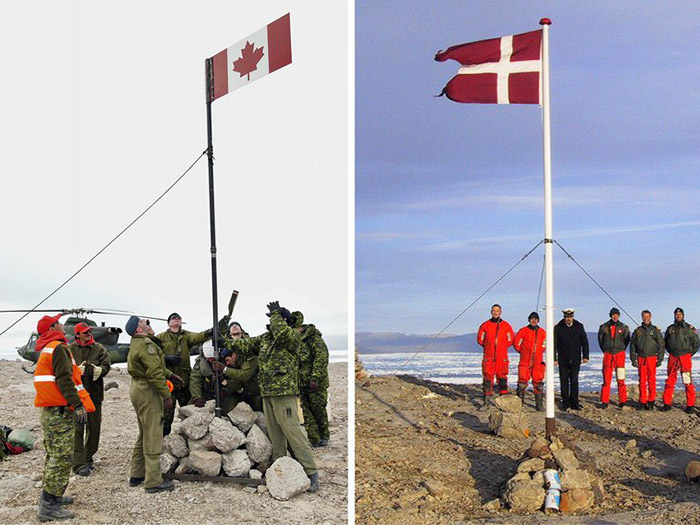 But in 1984, the Danes could not stand it and sent the military to the island, who installed a flagpole on it, hanging the flag of Denmark. A bottle of good Danish schnapps with a note “Welcome to the Danish island!” was left under the mast.